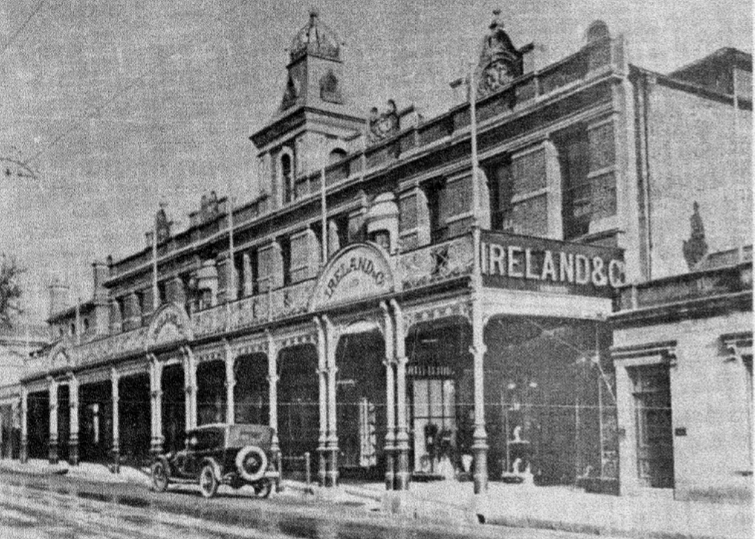 The short article below, written by an unknown author, tells the story of the restoration of the Old Ireland Building (Edgars) on Church Street, Pietermaritzburg. The piece appeared in the 1979 edition of Restorica, the journal of the Simon van der Stel Foundation (today the Heritage Association of South Africa). Thank you to the University of Pretoria (copyright holders) for giving us permission to publish.

Walking down Church Street in Pietermaritzburg, one building immediately catches the eye and irresistibly draws one nearer. Dominating the street scene, it forms a lovely whole with the many other old buildings of historical value and the quaint and interesting arcades that form the city centre.

The building houses a well-known departmental store, but what attracts customers - especially visitors to the city isn't tempting sales offers or special low prices, but the unusual exterior. Delicate white-painted lattice-work fit to decorate any wedding cake, a wide sidewalk and larger-than-life pictures of ladies and gentlemen from grandpa's day beckoning one from between hundred-year-old carved wooden door and window frames to enter, try and buy.

Stepping closer, one notices the brass plate mounted near the entrance to the store, presented by the Pietermaritzburg Society in recognition of the management's far-sighted and restorative contribution to the city. The charming frontage belonged to the original old Ireland's departmental store, a framed picture of which has the place of honour in the manager's office and has also been presented by the Society for this "fine example of what imaginative business can contribute to the viable retention of a city's historic character".

The store was built in the 1880s and had the distinctive trademark that not only people but horses too were allowed to enter! A fourteen feet high lane leading right through the centre of the building allowed thoroughfare for horses to the stables at the back - in fact, the store was actually built up and over this alleyway. When the new management took over the building, it seemed at first as though the whole shop was not fit for further use and would have to be demolished, but on second thoughts it was decided to retain and renovate the facade. It was then expertly connected to the brand new shop interior, which is as modern as they come.

Restoration work on the frontage entailed chipping off the plaster from the original brick frontage and doing repair work where necessary. To protect the beautiful stained glass windows adorning the second story of the facade from further weather assaults, a perspex covering was applied on both sides. Where possible, it was attempted to preserve the traditional atmosphere of the old store. According to the manager the renovated front has been one of the most effective publicity stunts ever. 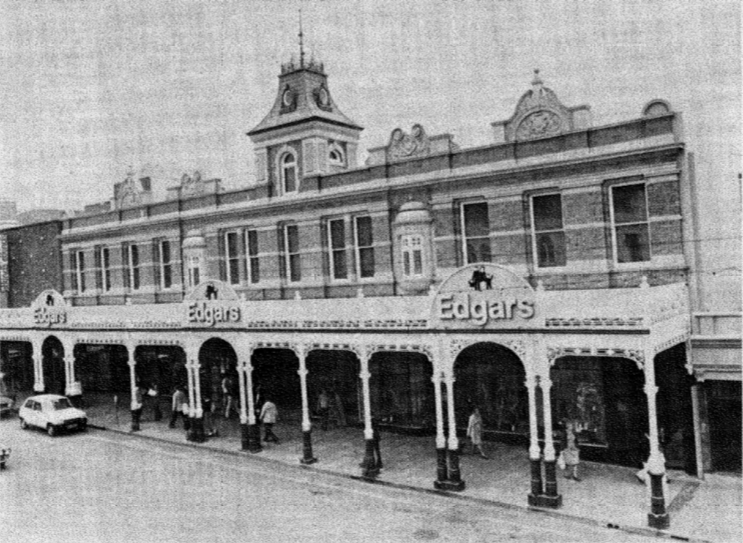 Although the new shop interior does not feature a public thoroughfare, a communal lane has been created between the new shop building and the adjoining attorney's offices. Greenery in the form of plants will be added to visually soften the concrete walls enclosing the lane and to make it more attractive to pedestrians. These plants definitely won't find their way to the mouth of a passing horse that happens to be hungry!

The unpretentious attorney's offices originally served as the home of Piet Retief's widow, before it was acquired by the Hawthorne family in 1879 and converted into offices. It has been in the family ever since. This frontage has also been renovated and the building declared a national monument.

Though times change swiftly, Pietermaritzburg's beloved old street fronts will continue to do the city proud for many a year to come.