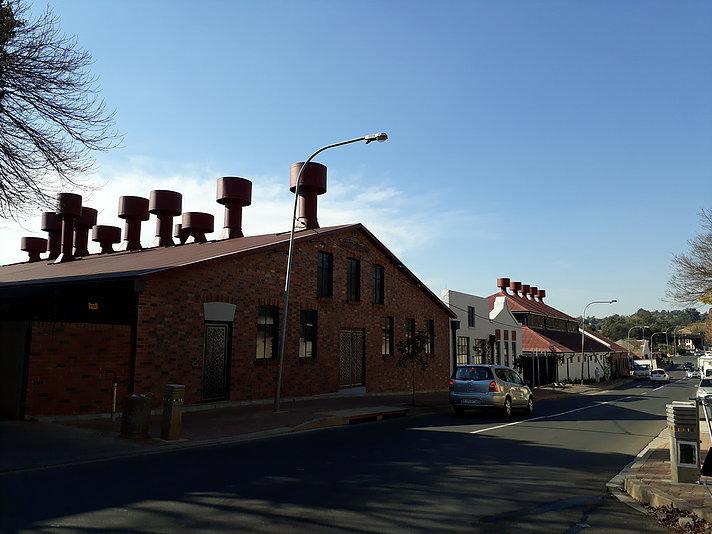 For over a decade journalist Lucille Davie has tracked the Rand Steam Laundries Saga (click here to read a compilation of her articles). Below is the latest installment highlighting the majestic adaptive reuse of the site. Click here to view more of Lucille's work.

A big “Hooray!” should echo across Joburg for the historic Rand Steam site in Richmond, which has risen from the destruction of Imperial’s mindless bulldozers 11 years ago.

This joy stems from the fact that the original 1902 Rand Steam Laundries & Cleaning & Dyeing Works has been largely reconstructed as a small neighbourhood shopping centre, in a unique first for Joburg, and possibly South Africa. It boasts the original streetscape, with the buildings created for adaptive re-use.

Imperial Properties bought the site in 2006. A clause in the sale document stated that as it was a heritage site, demolition permission had to be obtained. This was disregarded and two years later, when the provisional protection order expired, Imperial sent in the bulldozers, not only flattening the buildings (except for two), but those bulldozers repeatedly crashed over the debris, crushing it to nothing. The smell of the shattered oregon pine lingered for days. 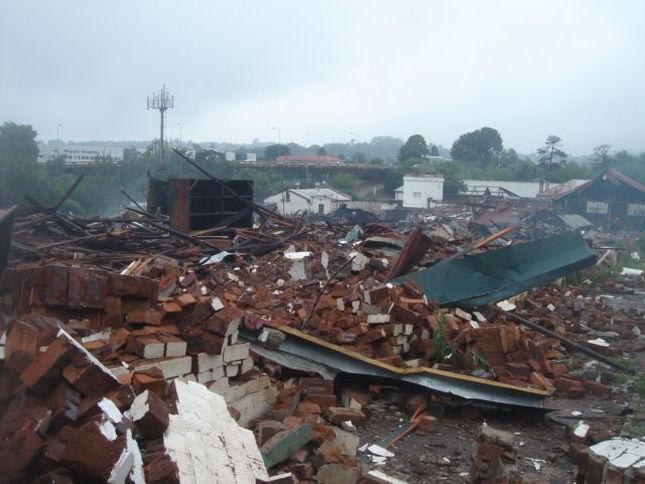 But the site is now wonderfully reborn, and it bustles. Anchor tenants Woolworths, Pick n Pay and Clicks are complemented by a cluster of trendy shops and restaurants, including a barber shop, an art gallery, a retro furniture store, and a speciality leather shoe maker. A grand decades-old pepper tree sits in one corner, against the backdrop of the Barry Hertzog flyover, and the tall glass Auto & General building. The Gas Works stream, the reason for the original siting of the laundry, still flows under the site, exiting in the north-west corner of the site in an excited gush. 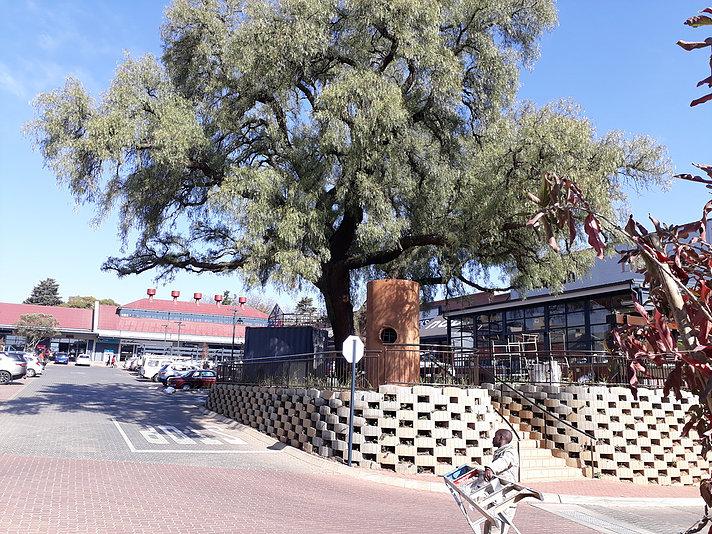 The original site was a small village with cottages for workers and managers, a blacksmith and farrier for making and maintaining its carts (used for collecting and delivering laundry), and a soap-making section. It was one of the last remaining examples of a steam-driven industrial site in the city. The laundry was sold in 1962, but in its heyday it employed 400 people, and was described by the then owner as “biggest private laundry in South Africa”. It had 15 vehicles, collecting laundry from 2 000 households, as well as hospitals from as far afield as Vereeniging and Boksburg, and many hotels in the city. The operation ran night and day.

When the laundry closed it became a ramshackle collection of small auto and crafts businesses, most located in the old buildings but also in additional buildings to the original village in Napier Road. 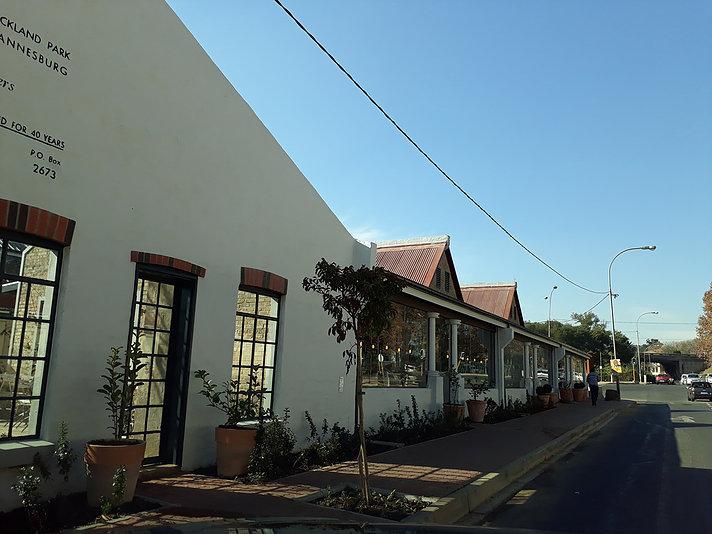 A portion of the restored complex (Lucille Davie)

Property investment company The Moolman Group, in partnership with Jonker Evolution, bought the property in late 2017. They took on this project as their first heritage reconstruction project, says project manager Hermann Stassen. “It was a passion project, which was quite fun. It was not the normal cookie cutter project.” Besides greenfield projects, the company also invests in existing buildings, and dilapidated centres with the aim of transforming and adding value.

Stassen gives full credit to Flo Bird, vice chair of the Johannesburg Heritage Foundation, who, for the past nine years, has been the passionate guardian of the site, which has been derelict and fenced while Imperial struggled to find buyers for the site. They were not prepared to reconstruct the buildings they had demolished, and the condition of sale was that the heritage buildings had to be rebuilt. Potential buyers considered a range of options for the site: high-density accommodation, a builders’ retailer, an insurance headquarters, medical suites, and an extension of the nearby sprawling Lancet laboratories.

“It has been nine gruelling years, which have been very, very unpleasant,” she says, “Imperial has been so reluctant, we have been fighting them all the way.” But she is full of praise for Moolman, and the end product: “It has been a labour of love, I’m very happy with it – it is such a happy shopping centre.”

Heritage architect Brian McKechnie says of the reconstruction: “The new buildings give one a good sense of the original Rand Steam Laundries.” 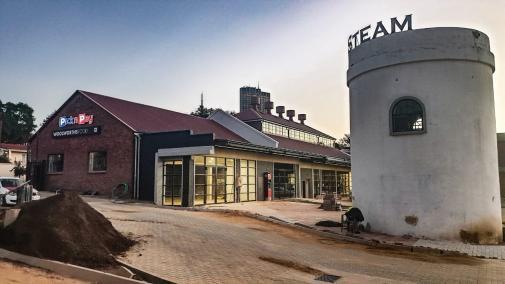 The centre shortly before it opened (JICP)

The 5 100m² site, of which 2 400m² consists of heritage buildings, is on the corner of Barry Hertzog Avenue and Napier Road. “The reconstruction component of the site was quite difficult,” says Brendan Hunkin of Impendulo Design Architects, the appointed architects. But the result has been “a success beyond belief”.

A challenge was that there were no plans for the old buildings. But that didn’t deter Impendulo. Their brief was “re-erecting the structures for adaptive re-use, using modern day materials where original materials were no longer available or uneconomical to use”.

In 2014 amendments to the Town Planning Scheme were passed by the City of Johannesburg, and a Conservation Management Committee was formed, which guided the reconstruction. The buildings were in a state of disrepair when Imperial bought them in 2006, and had been added to over the decades.

This presented a challenge: to which period should the buildings be restored? Another laundry of the same period, in Lorenzville, where the present Victoria Yards has been created, gave the architects “the perfect precedent to understand the period’s construction methods and details”. This meant that the timber trusses at Rand Steam could be accurately recreated, visible in most shops in the centre, giving each space a lovely loftiness.

Impendulo took special care to replicate the bricks as much as possible. The buildings were constructed over a 100-year period, so they consisted of different construction materials and methods. The old clay bricks were made in different colours and shapes. A visit up the road to the Johannesburg Country Club, and a study of the old water tower, squash courts and stables there, revealed the brick-laying method, different mortar joints and the way the bricks were burnt in the kiln.

A one-metre square section was sampled and the different orange, red and burnt bricks were noted. A trip to Corobrik to obtain similar bricks was organised. These bricks were then compared to the country club bricks, and the order was placed.

“The bricklayers were then tasked with laying the bricks in a non-regular pattern,” indicates the project narrative. Modern face brick was used for the new buildings.

Some 8 000 bricks were salvaged from the large hall-like building which was demolished to make way for parking. They were cleaned and used for the restaurant pond walls, as well as walkway retaining walls. Timber from the demolished building was used for the spiral stairway in the original water tower, the only remnant of the original laundry.

Roofs and other features

The heritage buildings have red corrugated sheet roofs and chimneys, while the new buildings have dark grey sheeting. The industrial steel windows were purpose made for the historic buildings, with cottage panes. Half-round gutters and downpipes were recreated to replicate the original details of the first buildings on site.

The stream which runs underneath the car park is remembered in the parking area. Rain water from the water tower roof runs into a concrete trough which snakes through the parking area, replicating the covered stream that now exits in the north-west corner of the site. Two ponds in the restaurant courtyard run into a pebble bed. “This playfully re-introduces the constant motion and sound of water within this dining courtyard.”

The toilets have a charming detail. When you visit the loo you’ll be pulling a chain to flush, with the cistern hanging on the wall. Take note of a 1915 artist’s impression of the original laundry, etched on the back of the door of each loo. Metro tiles, so called because they are used in the London underground metro stations, have been used at the wash basins. Being bevelled on all sides, they are easier to clean.

The Amawasha, the Zulu men who were the town’s first laundry entrepreneurs until 1914 when they were forced out of business, are remembered in a plaster etching on the gable wall of the restaurant courtyard. A clothes peg shape has been used to create benches and way-find markers on the site.

“The reconstruction will never be exactly the same, but we didn’t want it to look fake,” says Stassen. “In 100 years’ time, it will look the same as the original through weathering.”

Impendulo Architects say of the project: “The buildings will now evolve, weather and gather a new set of narratives which will be added to their history.” 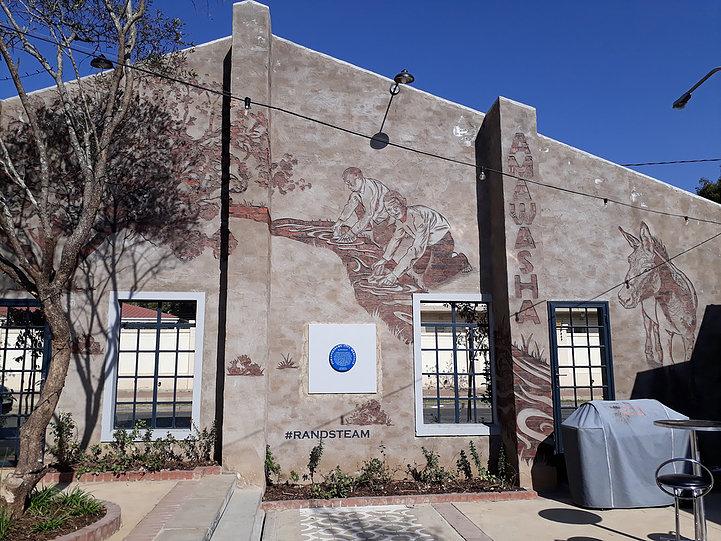