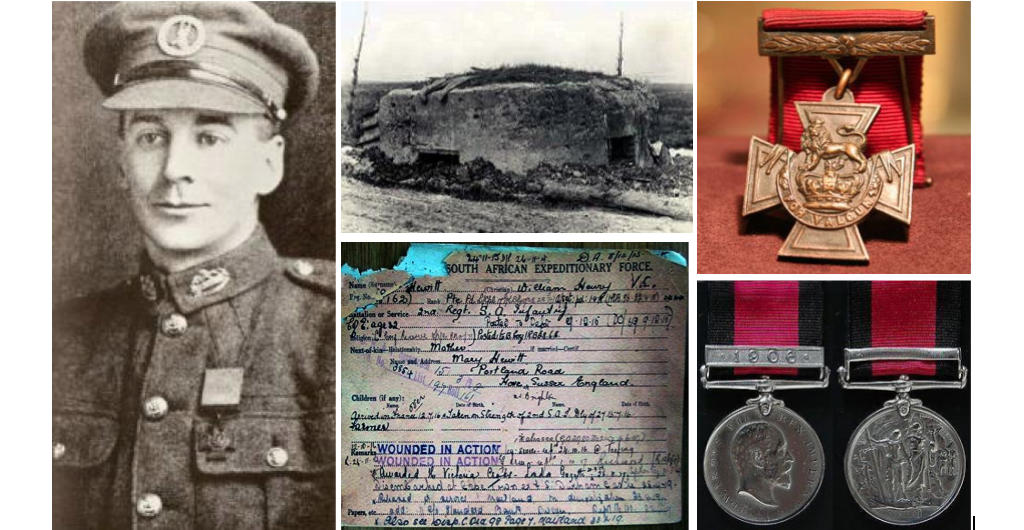 A soldier who would one day retire in Hermanus surprised himself by earning the highest British military award. He is William Henry Hewitt who was awarded the Victoria Cross in 1917 and who lived in Natal, South Africa between 1905 and 1915 and in Hermanus in the 1950s. He returned to the UK only when he was terminally ill early in the 1960s, but left instructions that his body should be cremated and the ashes cast into the sea at his favourite resting place along the Hermanus Cliff Path. 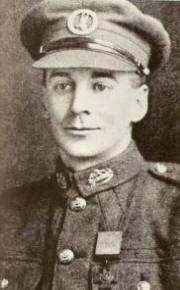 The son of a butcher and farmer, William Hewitt was born at West Hill, Elm Lane, Copdock, in Suffolk in June 1884. He attended Framlingham College between 1894 and 1900. In the spring of 1905 he immigrated to South Africa and as early as 1907 he applied for naturalisation as a South African and became a citizen as soon as the Union of South Africa was established in 1910.

From 1906, Hewitt worked in the Colony of Natal where he joined the South African Constabulary, which was an extra-military peace-keeping force that had been established by Lord Baden-Powell during the South African War.

The record of his examination for the SA Constabulary still exists. It lists his occupation as “Gentleman” and records his competence in riding, swimming and shooting. He was also “willingly vaccinated”. He saw action during the Bambatha Rebellion. This was an armed resistance by the Zulu chiefs against the imposition of a poll tax that had to be paid in cash. This usually compelled tribesmen to seek work in the gold mines to earn money and the resultant migrant labour pattern severely disrupted rural families.

Hewitt was awarded the Natal Rebellion Medal, but in 1909 left the paramilitary organisation to become a farmer. We assume that he supported himself by farming until the Great War started. On Christmas Eve, 1915, he enlisted in the 2nd South Africa Light Infantry and in July 1916 he arrived in France. 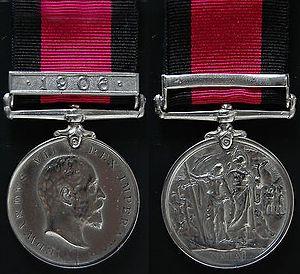 From July to September 1916 he fought on the Somme, and was the victim of a mustard gas attack during the Battle of Delville Wood. In October he was invalided to England. He recuperated in Tooting Hospital where he met a nurse, Lily Olett. They would later marry. November 1916 saw him back in France and involved in the Third Battle of Ypres-Passchendaele.

It was during this month that (then) lance-corporal Hewitt captured an enemy pillbox, single-handedly. We continue in Hewitt’s own words from an account he wrote in the present tense, soon after the events:

It (the Allied barrage to support the attack) really is a peach; a creeping one, and we all light cigarettes (you can see them all along the line) and stroll along behind it. We have seen a model of our front so we know just where we are and what we've got to do. My section has two pill-boxes to take; the ﬁrst a small one, but the second, from what I can see of it, doesn't look so funny. The Jerries come out of the ﬁrst with their hands up before we can reach it, ﬁve of them, and they run off to the rear without any guard.

Well, there's no time to do anything for them so I make for the pill-box which has a sort of doorway low down on the right-hand side. I heave a grenade down it and shout, ‘Come out you so-and-sos’. They do, two of them and ﬁre with riﬂes at me at about 10 yards range - and miss. Then some stinkpot throws a jampot on a stick bomb, which hits me in the chest and explodes. But the mutt who made it forgot to ﬁll it with the odd bolts and nuts, so apart from blowing off my gas mask and half my clothes, knocking out four teeth, breaking my nose, giving me a couple of black eyes, with a lot of little cuts here and there and knocking me back into a convenient shell-hole, it didn't really do any damage - only made me damn mad.

You see, I had become engaged to be married before I came out this time, and when I felt my teeth and face I thought that's spoilt my beauty. She won't fall for me anymore. Well, this is the pay-off. So rather gingerly I got up, picked up my riﬂe and made a dash for the back of the pill-box which was a real haven of refuge, as the barrage was away ahead and all was peace. I peered around the other side, and there was a loophole with a machine-gun firing nineteen to the dozen.

I thought ‘this is where the bomb comes in’. I still had two, so it looked easy. I lobbed one at the loophole; but it wasn't as easy as it looked and I missed and had to duck back behind the pill-box while it exploded. Now I had only one bomb left. I decided to make sure, so I crept right underneath, pulled out the pin, let the lever ﬂy up, counted two and pushed it through the loophole. Some stinker shot me through the hand, but not too badly, and I heard the bomb explode and ran round to the door as I thought there would be some fun and games in that direction – there was.

You went down three steps inside that doorway, and as I was running in with riﬂe and bayonet at the ready a Hun was running out with his hands up. It was my ﬁrst effort with a bayonet, and though I’d been told 100 times, ‘If you can’t pull your bayonet out, ﬁre a round, that will do the trick’, I forgot all about it and with my foot on the poor bloke, I was trying to pull it out when somebody grabbed me by the throat.

His attacker turned out to be a British sergeant trying to restrain him. Inspection by officers showed that Hewitt’s bomb had killed at least 15 German soldiers, damaged the pillbox and removed a major obstacle to the advance of Australian soldiers from the rear. Hewitt received his Victoria Cross in September 1917. 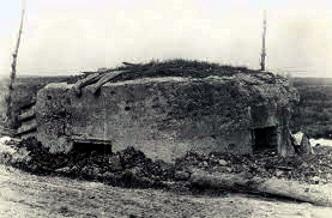 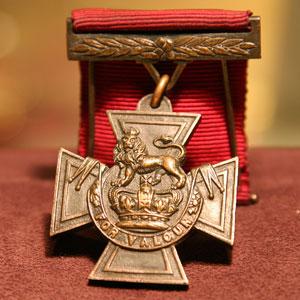 After winning his VC

After the War, Hewitt returned to South Africa and farmed in Natal from 1918 to 1925, during which time he married Lily Olett and they had three daughters. From 1925 to 1939 he managed the “Aintree” coffee farm in Kenya, so named because a horse belonging to an ancestor of the owner once won the Grand National.

During the Second World War he re-enlisted, at the age of 57.  He was given the rank of major, and was the Assistant Provost Marshal of Mombasa, in charge of the military police. Records of his service show that he was well-respected by the younger troops, even though he was in charge of the least popular section of the armies.

In 1950, at age 66, he retired to Hermanus.  Little can documented about his stay in Hermanus, except that he and his family lived in a house in Voëlklip and that he found his favourite spot on the cliffs where he sat and watched the ocean rolling in. 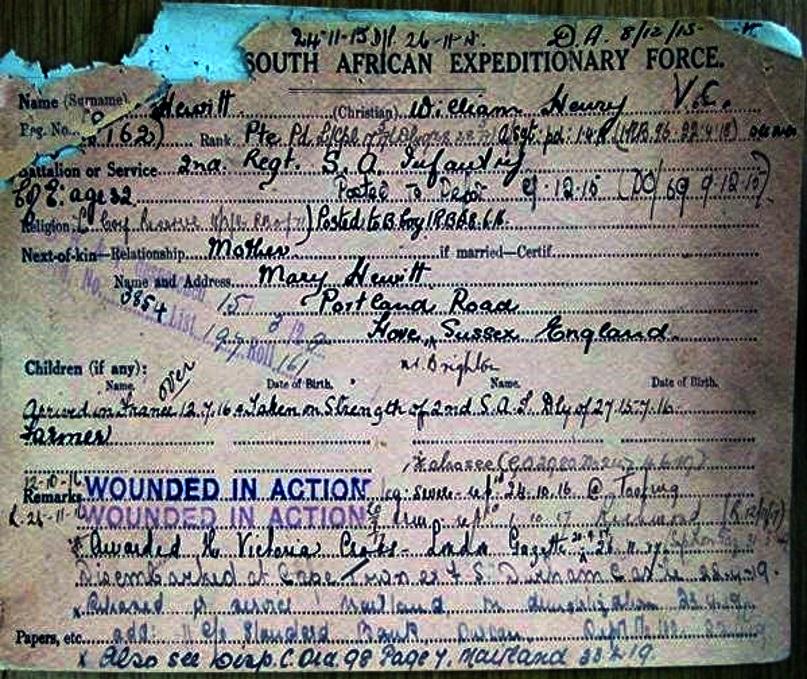 In 1961 he returned to the UK to live in Cheltenham with his family and received treatment for Parkinson’s and the long-term effect of his wartime injuries.  The treatment included an unsuccessful attempt to remove some shrapnel from this larynx after 47 years.

William Henry Hewitt died in December 1966, and was cremated in Cheltenham, Gloucestershire. His wife brought his ashes to Hermanus and they were scattered as he requested. The bench he sat on was recorded in the Hermanus Municipal records. His Victoria Cross is lodged permanently with the Imperial War Museum in the United Kingdom. We in Hermanus can share a little of the achievements of a man who became a South African early in life, served with distinction in the South African armed forces and wished to be remembered by his fellow townspeople.

On 20 September 2017, a celebration of the centenary of his actions to win the VC was organised by the Hermanus History Society and took place immediately adjacent to the bench he used. A video was made of the event which can be viewed on You Tube (click here to view).