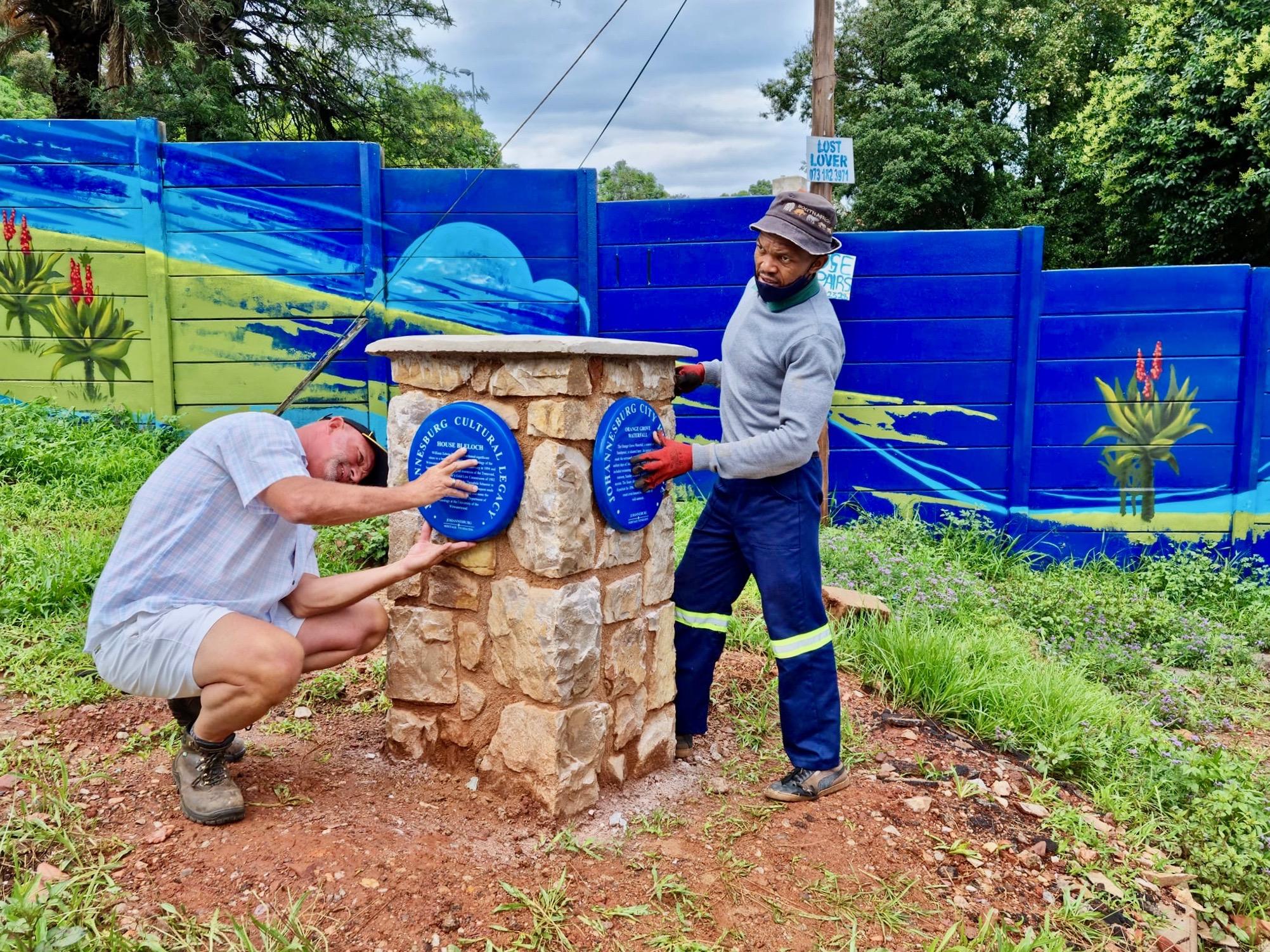 Johannesburg Heritage is proud to announce some new blue plaques. This week was installation ﻿week as Danie Smit (installer) and Kathy Munro (JHF blue plaque committee chair) set out on another blue plaque adventure. Each plaque is the result of a complex process of visiting the premises, deciding whether the place is worthy of a plaque, conducting and checking the research, compiling and approving the inscription and then asking for layouts, discussing those, ordering the approved layout and finally organising for it to be installed which means getting in touch with owners so we can have up to six erected in one day! Six went up on Thursday, 2nd December 2021. 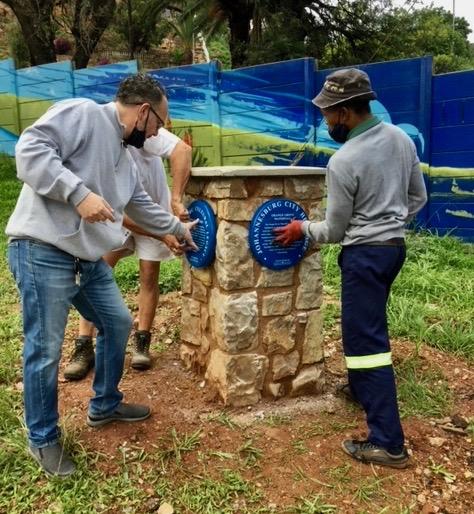 Our first stop was the old property, House Bleloch at the intersection of Louis Botha Avenue and Osborne Road Houghton. David Fleminger and Brett McDougall have commenced the task of clearing the undergrowth, mountains of refuse and rubbish to open up a path to the once well known beauty spot of early Johannesburg, the Orange Grove Waterfall. 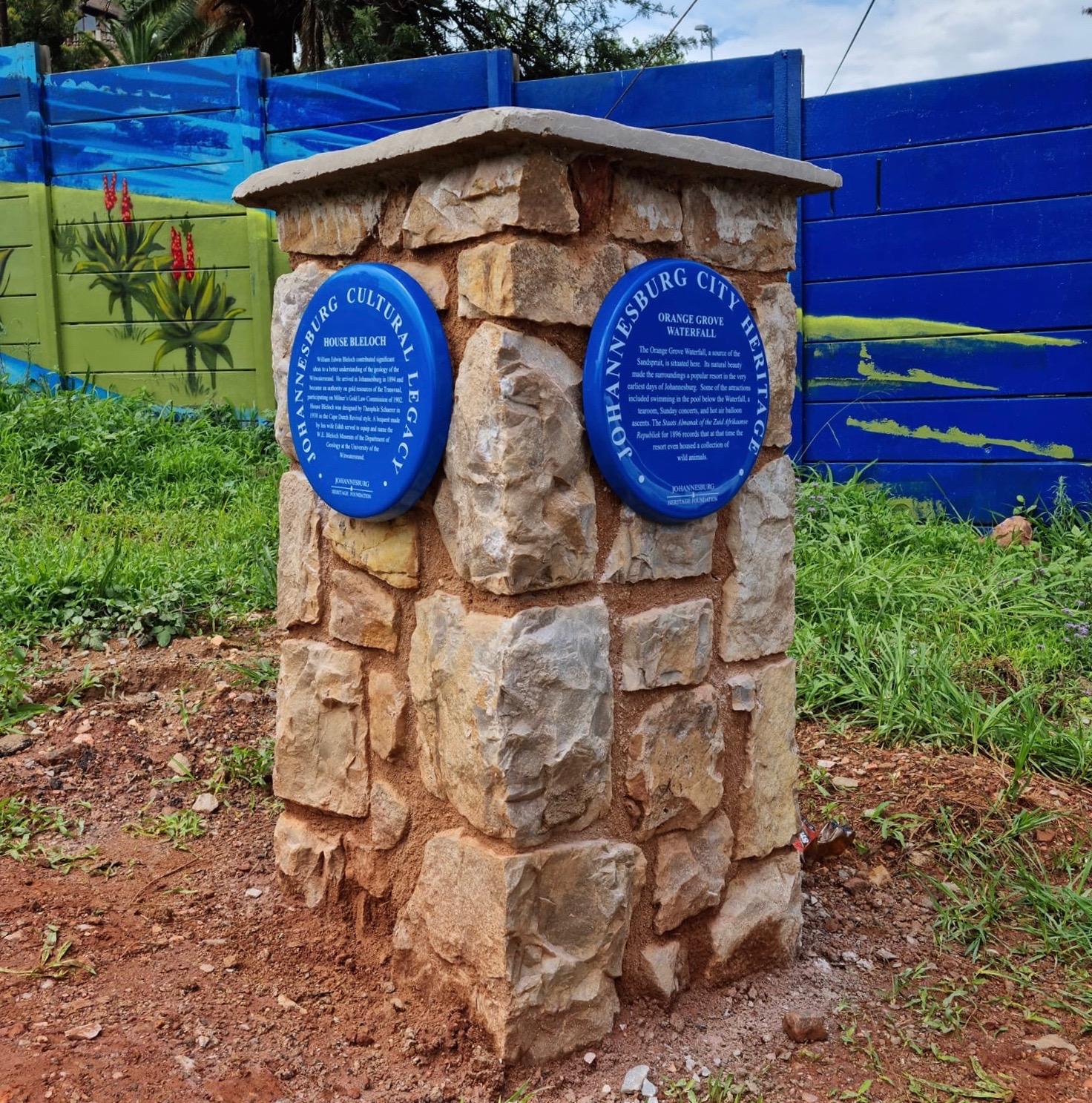 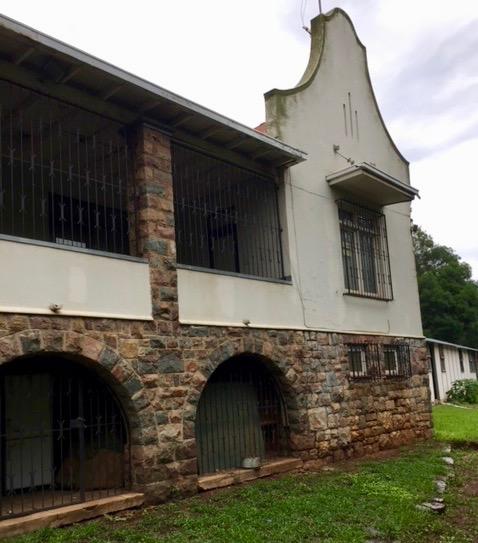 A glimpse of the gable of the Bleloch house. The house is in poor condition as the plumbing pipes have been stolen. (Kathy Munro) 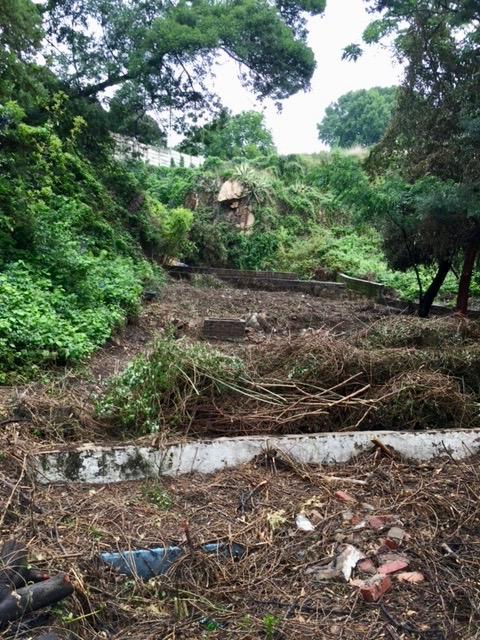 Clearing the way to the Orange Grove Waterfall (David Fleminger) 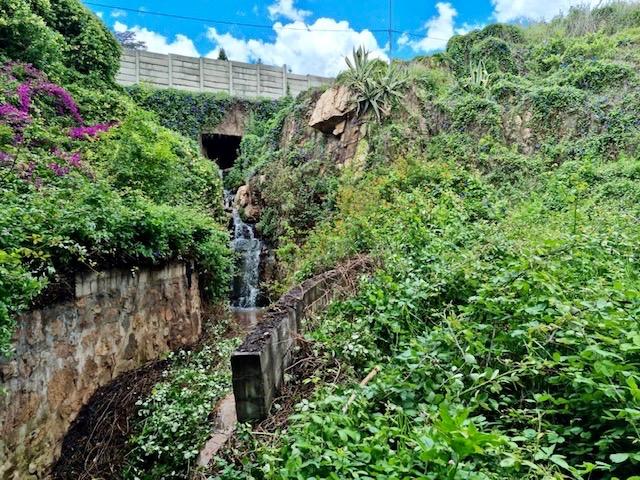 As Brett Mc Dougall explains: “The Waterfall’s scenic beauty and crystal clear waters were appreciated by the City’s first inhabitants and soon a hotel and tearoom were established nearby, and the area became a popular resort, especially over weekends. Some of the attractions offered by the tearoom were Sunday concerts, a coach ride from the centre of town at one shilling per ride, and air balloon ascents.” 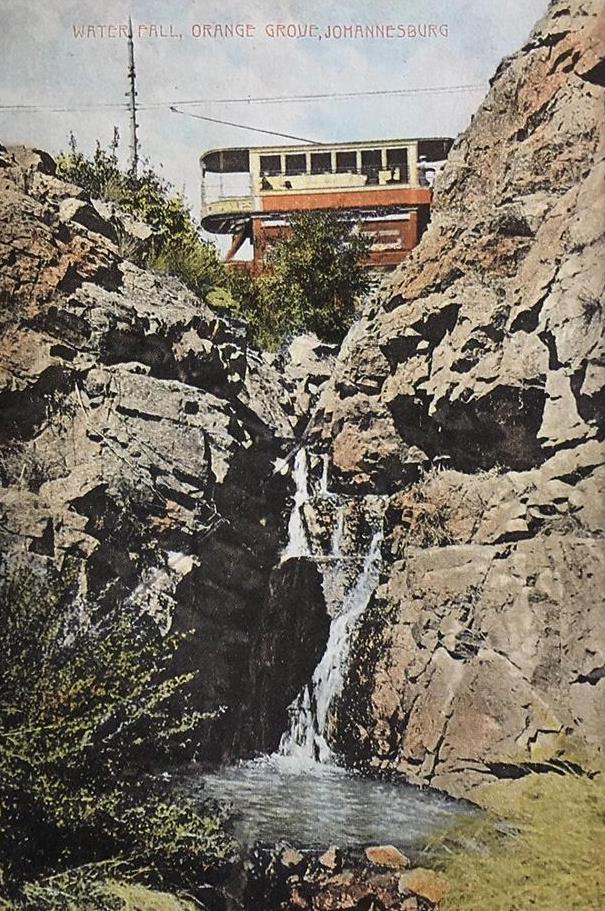 The property is a large strange rambling place hidden behind a colourful mural wall as one descends death bend on Louis Botha Avenue as the rise of the hill levels off. Today, House Bleloch has the feeling of an abandoned eerie mansion. It is on the cusp of loss but Johannesburg Heritage is working to save this once fine home designed by the architect Theophile Schaerer (the architect of the Wolmarans Street Great Synagogue). 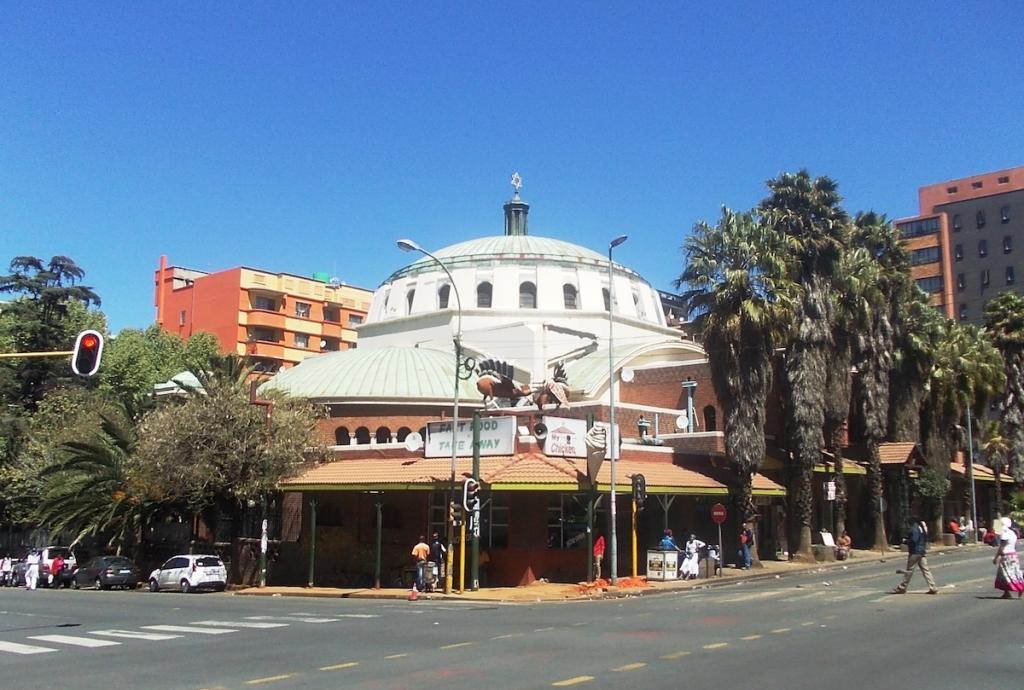 Brett McDougall and David Fleminger have invested significant time and resources to save the house and the natural heritage of the waterfall. The house was once the home of William Edwin Bleloch and his second wife Edith. Bleloch was a self taught geologist and expert on gold who gave his fine collection of geological specimens to the City of Johannesburg; the original geological museum was named for Bleloch and there is also the Wits Bleloch Museum of Geology in the Geosciences Building. The house was built in 1938 in the Cape Dutch Revival style popular in this period. Bleloch was a man brimming with ideas and wrote two important books: one on South Africa as it looked to the prospect of the British presence and rule after the Anglo Boer War and the second, co-authored with A E O Flatherty, with the unwieldy title that left no doubt where it was heading A Thousand Million Pounds, for Us or Germany, the future of the Far East goldfields which was published in 1917 and is a tract of its time expressing all the anxieties, hopes and prejudices of the period. There were also other publications. Bleloch’s books are collectors’ items today. 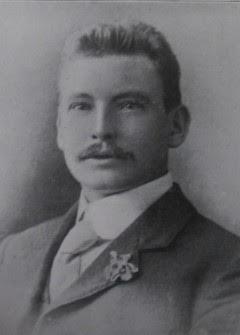 Move beyond the house and one enters the wilderness of an abandoned pleasure garden: there was once a generous sized swimming pool, now filled in. Weeds, rubbish and old bottles form formidable piles of debris. The trees are overgrown and it becomes an Indiana Jones African adventure tramp to the waterfall. David Fleminger is opening up a pathway and the dream is to make this once again a picnic spot for Joburg citizens . It can be done! We are confident.

The second blue plaque installation took place in Killarney. A pair of identical blue plaques were positioned at the East and West entrances of Killarney Hills the luxury apartment block on the ridge overlooking the Wilds. Designed by the architect Monty Sack for the Schlesinger family, it is a modernist work of substance showing Brazilian influence. Many of the fittings and decorative features were by South African architects of the period… Baldinelli, Skotnes, Villa, Scully and Cattaneo. The surface on which the plaques are anchored is local granite chips which Sack used to great effect to form textured panels. A manicured front garden with a riot of summer flowers in bloom sets off this high quality Johannesburg building. We acknowledge the support of Pieter Steyn and the Trustees of Killarney Hills. 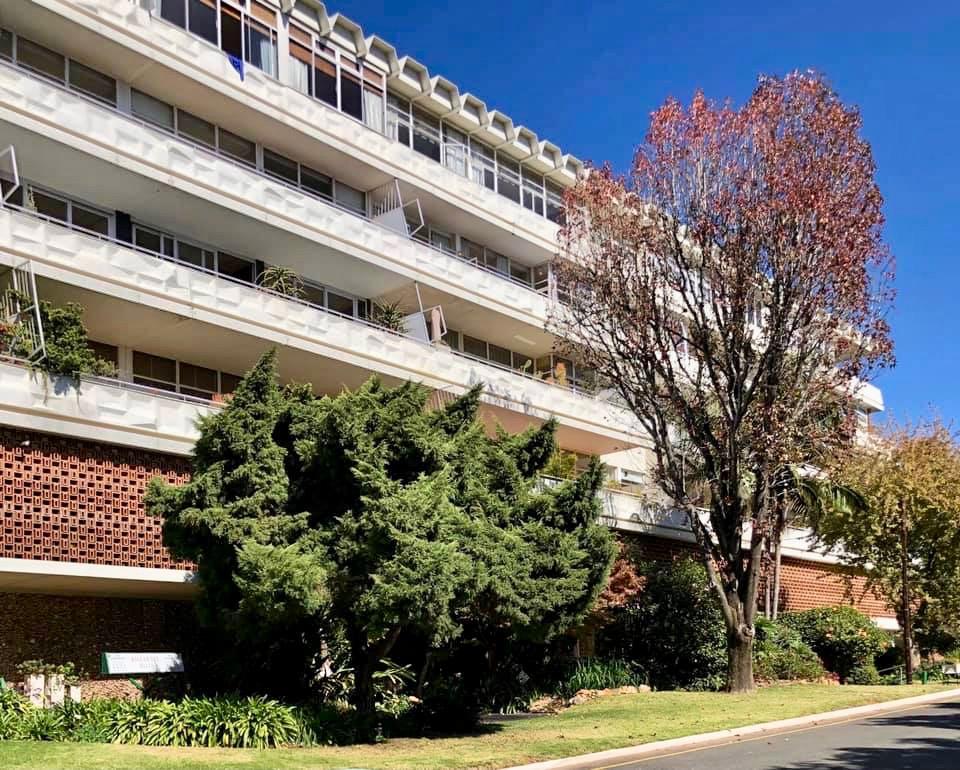 The front facade and gardens of Killarney Hills 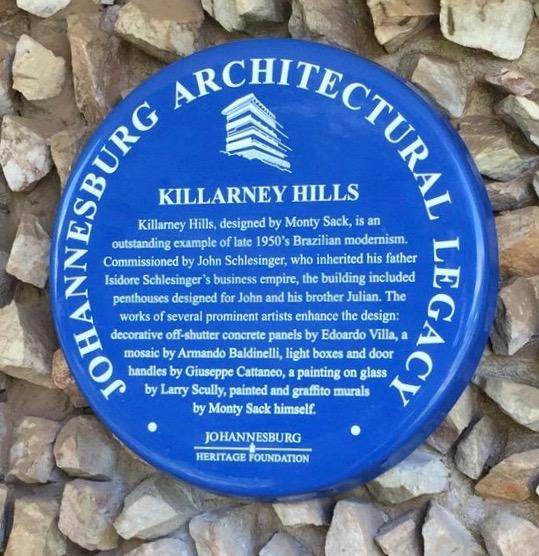 Our next stop was in Mayfair... a different mood and place; an inner city old suburb that once had London aspirations. A blue plaque was presented to the Khan family who are the fortunate owners of this property. 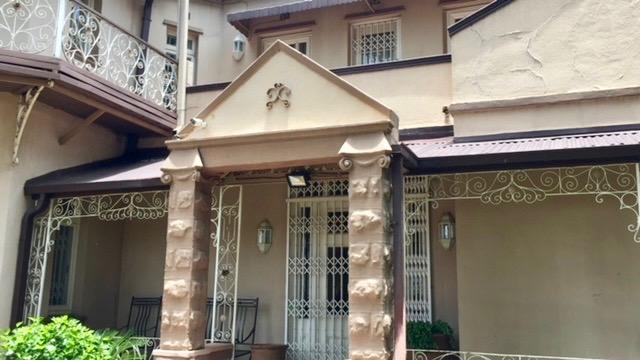 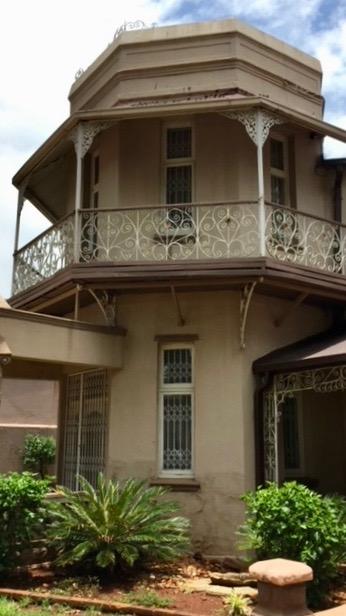 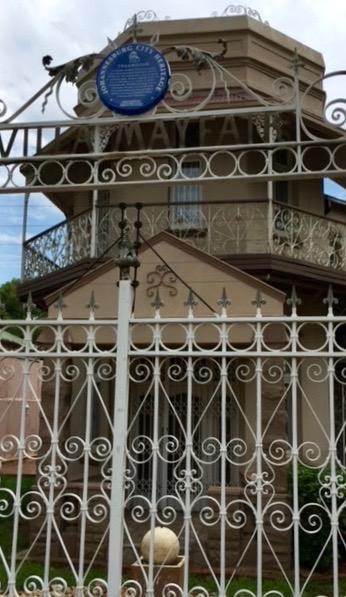 Villa Mayfair dates back to the late 19th century . It was built by Gustav Busat, a German immigrant who married Martha Bertha Mattic. It’s a fanciful home with turrets, domes, stained glass windows and original wrought iron gates. The house has been a landmark of Mayfair for over 120 years. After the South African war, this large house became a nursing home for some years. There is a giant heritage status oak tree in a corner of the garden. On the opposite corner is what was once the Mayfair public swimming pool but is now a Somali school. The character of Mayfair has changed over the decades. Originally Jewish families settled here and there was a 1920s synagogue. Mayfair also has an Afrikaans Community; the late former President of South Africa FW de Klerk was born in the suburb in 1936. Today, Mayfair is an area of South African Indian Muslim families often owners of interesting small stores and the synagogue has been converted to a mosque. The suburb also appeals to recent Somali and Ethiopian immigrants. There are some hidden gems of houses.

We acknowledge the support of the Johannesburg Heritage Foundation, Ebrahim Khan and family.

Our final blue plaque was set in place at the iconic Greenside home on Cruden Bay Road designed by and for Rex Martienssen, the sparklingly Wits trained and Le Corbusier influenced architect who trumpeted the arrival of the modern international style in Johannesburg in the 1930s. Martienssen led the “Grupe Transvaal“ as Le Corbusier called the young enthusiasts from Africa who visited him in Paris. The house makes an important statement about revolutionary thinking about domestic design in the late 1930s. The house was completed in 1939. Sadly Martienssen died very young at the age of 37 in 1942 after he had enlisted to serve in the Air Force in the Second World War. Today, this timeless house is the much loved home of Carmen and Philippe Van Der Merwe. This blue plaque was funded by the Egoli Heritage Foundation and recalls how much the late Herbert Prins admired Martienssen’s work. This house is of international significance in the architectural canon. 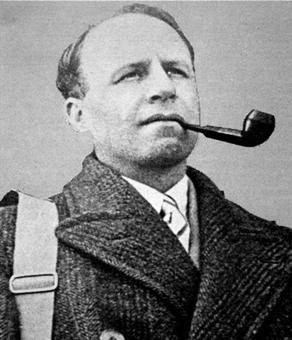 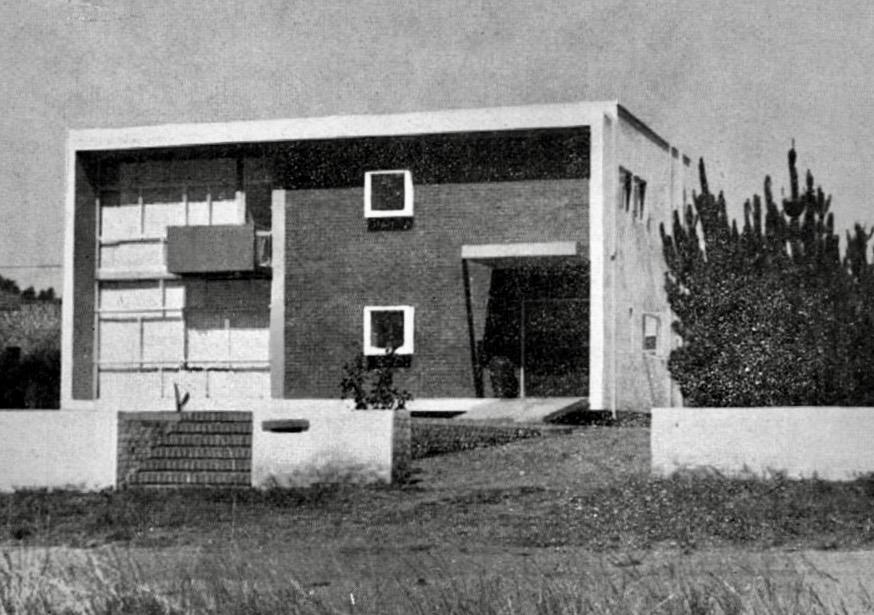 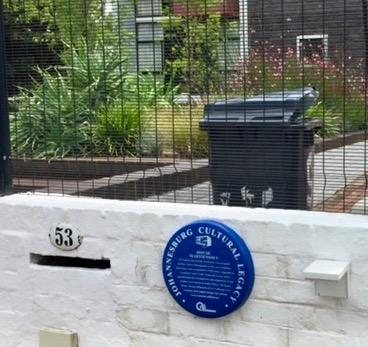 The plaque after installation (Kathy Munro)