A Transvaal Colony Dog Tag from 1903 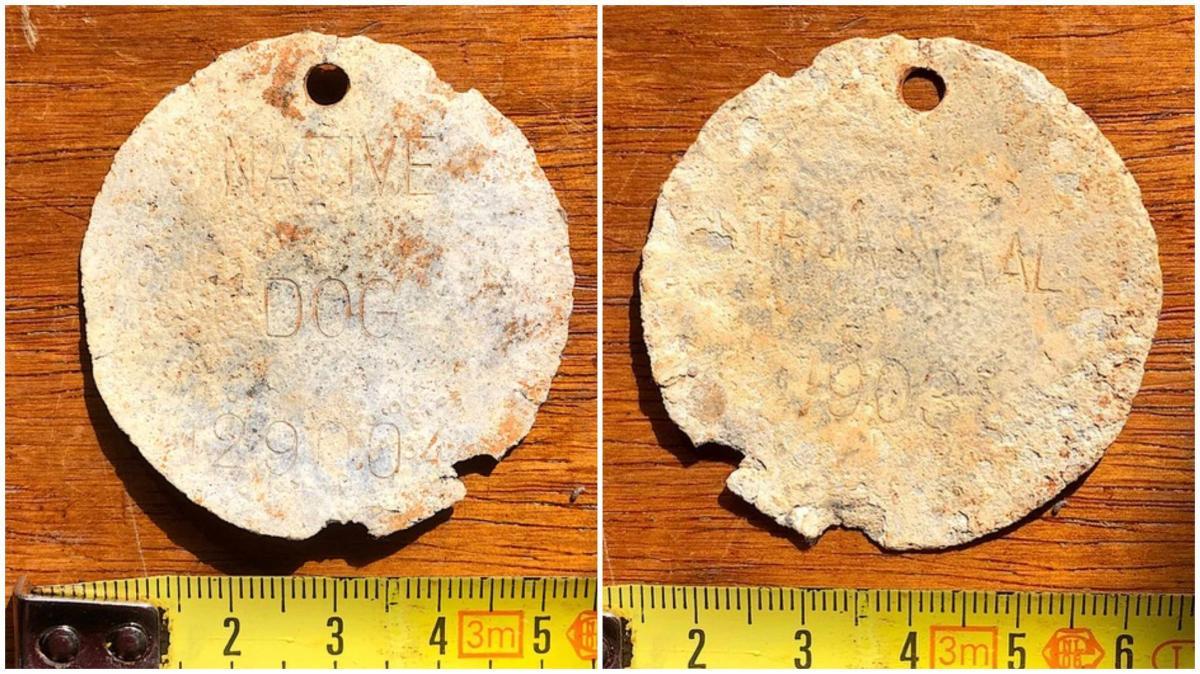 While not precisely an archaeological matter, I thought that a short note on a metal item found in Haenertsburg (Limpopo) a few years back might both interest readers and encourage feedback. A dirt track was graded to provide access to a plot being developed just outside Haenertsburg, one of the original gold mining centres of the ZAR. My sister lives next door and as I was visiting at the time, I went across to see what had been exposed.

I have known for some time that historical debris is present in the area which is downslope of the original hospital, said to date to the early years of the twentieth century. This debris consists in the main of undecorated sherds of local clay vessels, but occasionally items of a European origin are exposed during farming operations and in mole-rat mounds. This “exotic” element includes sherds of bone china, glass fragments and the occasional bakelite item. We have even come across a small but broken Bakelite toy car of 1940s vintage that we gave to the custodian of the local village museum.

As expected the grader had churned up many clay sherds, but there was one item that caught my eye - a flat and weathered metal disc. Careful cleaning revealed hand stamped text on the two sides. One side reads NATIVE DOG 029004, while the other more weathered reads TRANSVAAL 1903 (see main image). Its presence seems to confirm my earlier assumption that the debris is not simply an old village garbage dump, but it marks the old African “location” for either the hospital or may be even the village as a whole. It is not shown on the old map in the village offices.

I have tried to find additional information on the token, but haven't been successful. “Transvaal history” is not my speciality and sadly I have found little to assist me in my online searches - I am not interested in “dog tags” of recent origin intended for human wear!

What I do know is that early government taxation of “native dogs” was a policy present in several countries across the region. It brought in revenue, but the practice was much more to do with enforcing colonial control. The “native dogs” were considered a threat to wildlife because of hunting as well as being a potential source of rabies infection. The ZAR Volksraad Resolution 24 of 1895 required every African male over 21 years to pay, amongst other things, an annual 10s dog tax through the local veldkornet. Under subsequent British rule of the Transvaal Colony (1902-1910), the earlier Volksraad native taxation regime was retained, although British enforcement was more thorough with payment collected and accounted for by the local Native Commissioners. The dog regulations were later amended to allow Africans to keep one animal free of tax, but other punitive measures were added. This introduced a breed specification with certain animals, those judged as hunting dogs of a “greyhound type”, attracting a somewhat draconian tax of £5.00 per dog. Not surprisingly by 1909 these changes to the law resulted in the killing of many dogs, both by their owners and Native Department officials. Revenues from dog tax receipts plummeted, and many district officers complained bitterly to Pretoria about this element of falling revenue in their annual tax returns. How the owners felt is sadly not recorded.

This weathered, thin disk of metal from the dirt in Haenertsburg is a Transvaal Colony receipt for dog tax for the year 1903. It is written in English which supports the fact that it is a creation of the post-war Milner administration. The small hole is a nail hole as it was intended that, like hut tax tokens of the same era, the disk be nailed to the door or doorpost of each taxable family head. Inspectors could therefore easily identify those who had or had not paid. Being at the very edge of Haenertsburg village, this dog owner would have had little choice but to comply.

Having worked with early Native Hut Tax tokens from Bechuanaland and Rhodesia, this item intrigues me. It appears informal, being cut out of thin sheet iron and hand stamped. Most tax tokens I have dealt with are commercially pressed brass, with different shapes or images for different years. Was this Haenertsburg disk an official Transvaal one or the initiative of a local official; how were they issued; and how was the numbering done - I cannot believe that Haenertsburg had over 29 thousand dogs in the district.

The apparent dearth of information on Transvaal Dog Tax disks intrigues me. It contrasts with the related matter of Native Hut Tax and the impelling of rural African labour systems. I have found on the web, or been sent by fellow archaeologists, several interesting papers on rabies in the old Transvaal and histories of the Rhodesian Ridgeback breed, but I can find nothing that relates directly to matter of Transvaal “Native Dog Tax”, its administration and the controls it sought to implement.

Maybe I am wrong and I hope that this short note on an item of historical archaeology, will encourage comment from readers. It is remarkable that I haven’t come across a similar disk for sale, not that this item is for sale as my plan is to place it with a public institution together with any relevant paperwork that I can put together. Any reader’s assistance in building this story would be much appreciated.