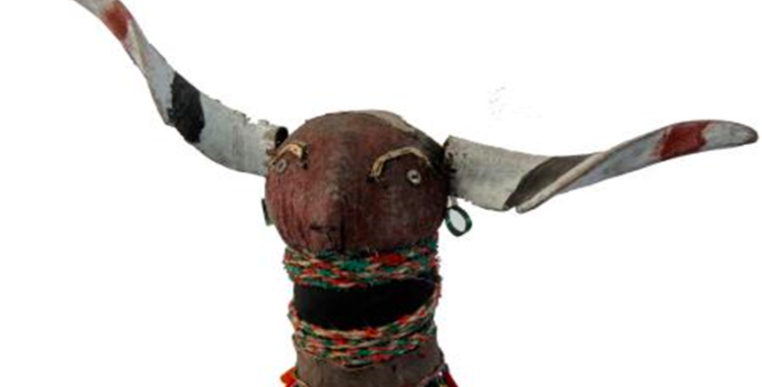 The Wits Art Museum (WAM) in Braamfontein, Johannesburg, has around 12 000 items in its stores, with a strong southern African ethnographic collection of beadwork, drums, headrests, wooden sculpture, ceremonial and fighting sticks, dolls, masks, basketry, sculpture, wirework and textiles. The WAM collection contains many fertility ‘dolls’ from southern African cultures, and has 58 items which are named as ‘dolls’ made by Ndebele or the closely related Ntwane group. A set of seven similar Ndebele dolls is of special interest because one of the dolls is unusually tall (90 cm) and has painted horns. The goat horns increase the stature, ferocity and apparent power of the doll, and perhaps this adds to the ritual value as this is not a ‘doll’ in the conventional child’s plaything sense. 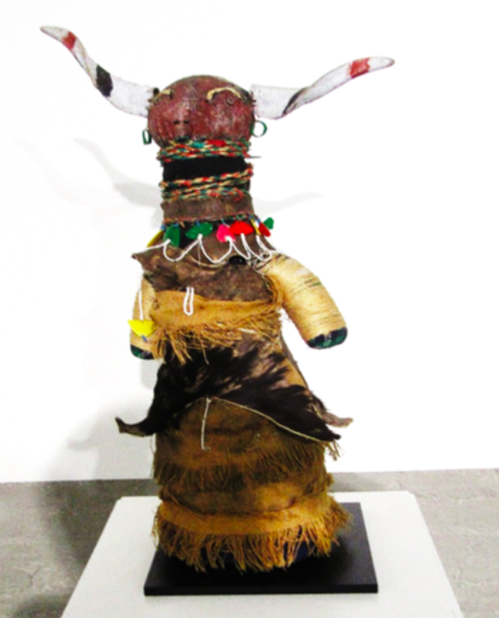 Front view of the 'mystery' Ndebele doll, 90 cm in height and with painted goat horns. The figure is also wrapped in a goat skin apron. Wits Art Museum collection, 2018.

Provenance of the seven dolls

The seven Ndebele dolls were collected in KwaNdebele at an unknown date, and donated to Wits University in 1982 by Mrs  Toni Herber. There is no archival information about Mrs Herber, the dolls or their maker, although Ndebele dolls for the tourist trade became available from the 1950s. The circumstances of this original acquisition or the exact locality or venue where they were sold/purchased in KwaNdebele is also not known. For this reason, online sources were used to try and understand more about why the set of similar dolls were made and sold and why they are somewhat different from other Ndebele dolls, both historic ‘museum quality’  dolls and contemporary tourist-style dolls.

Two of the seven similar Ndebele dolls in the WAM collection.png 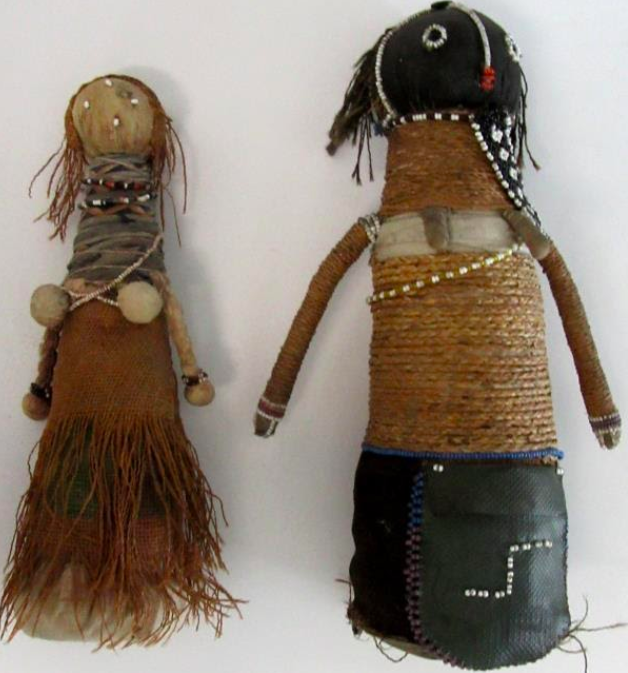 Two of the seven similar Ndebele dolls in the WAM collection, 2020. These dolls are about 25 - 30 cm in height.

The book ‘Evocations of the Child: Fertility Figures of the southern African region’ by Elizabeth Dell and Rayda Bedkers (editors) (1998), mentions that many public and private African art collections contain examples of what are called African ‘fertility dolls’ which are anthropomorphic forms, fabricated by women, with a believed use in aspects of the maturation and identity of women, i.e. in rites of passage to womanhood. These doll objects may cover a range of manifestations of the fertility of women, from girls’ playthings and games to assist with the socialisation of girls, to objects used by adults in the performance of specific rituals about women and their power to reproduce. Doll figures can also be used to represent wished-for children, or used for instruction of young women  in preparation for adulthood. There is similar symbolism in the design and purpose of Southern African traditional dolls.

History of the Ndebele

In 1883 white settlers defeated the Ndebele and confiscated their land, forcing them to relocate to different parts of South Africa. Art became a way for the displaced Ndebele to assert their cultural identity through this time of great trauma and strife. In the 1970s, an artificial KwaNdebele homeland (Bantustan, see map below) was formed to encompass the Ndebele people, but in 1994, the Ndebele and other homeland inhabitants were reincorporated into the newly independent South Africa.

Map of the Bantustans of South Africa via Britannica.jpg 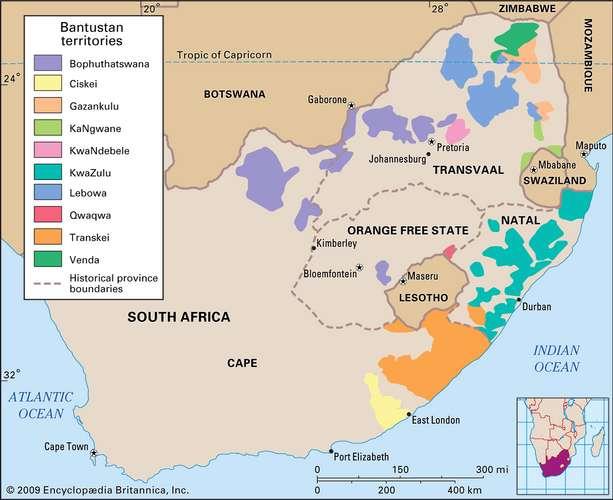 Map showing the locality of the South African apartheid era homelands and the location of the tiny KwaNdebele homeland, the small pink area north-east of Pretoria. (Britannica)

During the grim homeland times, with their men-folk involved in migrant labour, the Ndebele women kept their art alive and became well-known for their use of bold, colourful, geometric designs for their homes, beaded clothing and jewellery. Beaded ceremonial art of the Ndebele includes ceremonial body ornaments, blankets, skirts and aprons. Married women wore several beaded grass hoops around their neck and legs. All of these items are now highly collectable and feature in museum collections around the world. Ritual dolls were made by Ndebele women for rites of passage ceremonies and as status symbols. In more modern times, Ndebele beaded dolls have become major export items for Ndebele women’s artists’ cooperatives and are now semi-mass produced and sold online. Similarly, the older dolls are found in museum collections around the world.

Ndebele doll figures made for the tourist trade - source by Sue Taylor.png 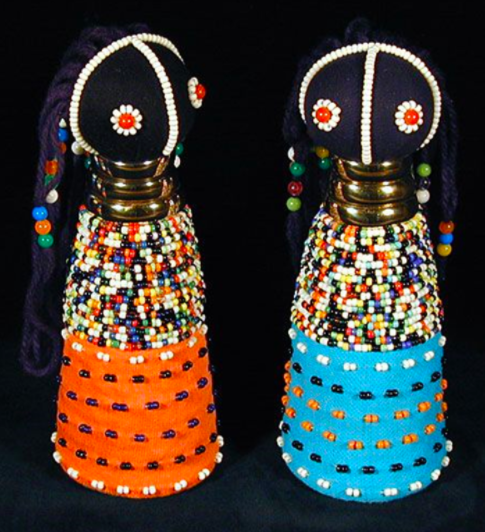 Ndebele doll figures made for the tourist trade, circa 2020, and showing typical brass  neckbands, now represented with gold plastic hoops

In order to find images of dolls similar to the seven Ndebele dolls in the WAM collection, an extensive online search was carried out. Books at the WAM research library were also consulted. Surprisingly, while many images of various types of Ndebele beaded dolls could be found, few dolls similar to the WAM dolls were found and no images of a doll similar or resembling the large goat-horned doll could be found.

The Ndebele dolls in the Smithsonian National Museum of African Art are a much older style and made of rings of grass decorated with beads in a ‘Michelin Man’ style. The Israel Museum in Jerusalem also has an Ndebele art collection, and several of the dolls in the collection show many similarities to the WAM dolls (in the way the beaded eyes are done, the conical shape and the way the breasts are made as fabric pouches), and are described as ‘late 20th Century’. The WAM Ndebele beaded dolls in the set of seven may actually be older than this, dating around 1950. Many auction houses with online portals have ‘vintage’ Ndebele dolls for sale, but the use of the word ‘vintage’ is a bit of a stretch as the dolls are mostly recent.

The beaded Ndebele dolls in the Israel Museum Ndebele collection.png 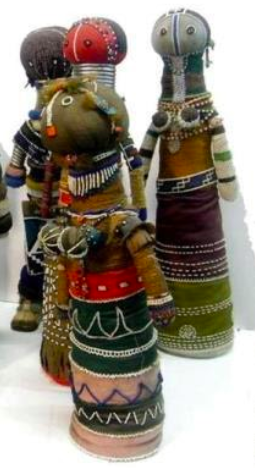 The beaded Ndebele dolls in the Israel Museum’s Ndebele collection which are similar to the WAM Ndebele dolls. These dolls are said to be ‘late 20th century’.

Searching for an explanation for the goat-horned Ndebele doll

The goat-horned Ndebele doll of the WAM collection has a haughty, intimidating demeanour.The mouth made of green beads appears to be speaking, and it could be said that the face and head are painted the colour of dried blood. The strange button eyes are sewn with a horizontal thread, seeming to be like goat’s eyes. Because of the use of animal hide for the skirt and apron and horns of a goat, one might conclude that this is not a ‘typical’ doll, but either a sculpture or a unique fetish or ritual object. Whoever made this figure deployed considerable creative effort in designing and executing the work. Like the other six WAM dolls, a thoughtful use of found materials is made.

The use of colour in African culture also has significance. In the goat-horned figure, colour is used either for dramatic effect (the orange/green and neutral twine, or the plastic used for earrings and necklace), and for symbolic effect. The black, red and white colours used to paint the horns have meaning, perhaps to do with the spiritual realm. The goat horns themselves, along with the goat hide used to clothe the doll, are also potentially spiritually significant. Goats are ritually slaughtered in southern African culture and the wearing of goat skin bracelets (called Isiphandla) from a slaughtered goat is highly significant and protective. Isiphandla is worn for many traditional purposes and the smell of the leather allows the ancestors connect with the wearer. The goat horns themselves do not seem to be used for any ritual purpose.

After a search of images in the specialist books on African art and sculpture in the WAM library, nothing could be found that resembled the goat-horned WAM ‘doll’. Similarly, online sites were searched for images of Ndebele and other types of African dolls and none resembled the horned WAM fertility ‘doll’. Further, to try and understand the strange use of animal horns in the tall doll, sangoma (traditional healing and fortune telling) practices were considered. Online images of South African traditional healers and their headdresses were sought, but in the end, it was found that no sangomas from southern Africa wore dramatically horned ceremonial head gear or attire. Sometimes, duiker horns could be used in a beaded headdress, but never goat horns.

To gather more information to understand the tall, goat-horned WAM ‘doll’, a photograph was sent to a trained sangoma and this was followed by an interview. My informant explained that, while she had never before seen such an object, it was likely that the WAM doll object was not a traditional fertility doll in the sense that it would promote the fertility of a married woman, but a doll associated with the training of a sangoma. However, conventional sangoma dolls do not usually look as ferocious as the horned WAM doll, said my informant.

When a sangoma is undergoing her training, she will assemble an object which, over time, she will  imbue with special powers. This object is often a doll, but may be other constructed objects or bundles. Often, inside the doll or bundle, a small parcel of totemic objects (bones, shells, and pebbles) or plant material may be embedded, also to confer powers onto the doll/object. At the end of her training, when the doll or object is complete, the sangoma will be represented by the doll. It will be displayed in the room or hut where the sangoma practises. The doll would be kept for the sangoma’s entire life, and not usually sold. It might be passed on to a daughter.

We discussed the goat horns and how the ‘doll’ seemed powerful and frightening. The respondent explained that while the training of a sangoma was for healing, occasionally a sangoma will ‘choose the dark path’ and get involved in witchcraft and thus it is possible that the sangoma who made this doll had a leaning towards dark magic.

Because I could not find any images of a similar horned sangoma headdresses online (noting that the Internet is not a comprehensive source, especially considering the rather secret nature of sangoma practices), I am not convinced that this strange doll is a sangoma doll. The doll thus remains an unusual and enigmatic figure which may have been an artistic expression, rather than the making of a ritual or craft object. Perhaps this was an experiment in the dramatic by an unknown KwaNdebele artist or even an experiment to see what would be saleable to the tourist trade at the time. It would seem that the experiment was not repeated as there are literally no other dolls like this horned figure. Tracking down the goat variety that donated the horns might pinpoint the locality where the goat-horned doll was made, possibly in the 1950s.

About the author: Sue Taylor holds a PhD in Plant Biotechnology from the University of KwaZulu-Natal, South Africa, and has worked in the agricultural sector doing crop biotechnology research.  She recently spent five years at the University of Pretoria, South Africa, coordinating an African mountain science network funded by the Swiss Agency for Development and Cooperation (SDC).  During this time she organized two mountain research conferences, one in Ethiopia and one in Tanzania. Her current research interest is in creating resilient cities in Africa and the value of trees, parks and public open spaces.  She is Research Fellow at the Afromontane Research Unit, QwaQwa, University of Free State (South Africa).