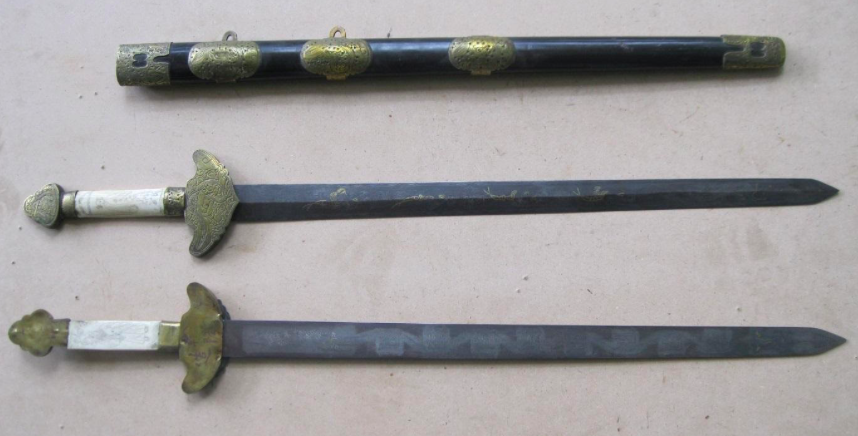 According to legend, Chinese swords were first made well before 2000BCE. They are said to have been made of gold by a mythical hero named Suiren (fire maker) who also taught the Chinese people how to make fire and cook food.

Archaeological records suggest that the first Chinese swords were of bronze and were made during the Shang Dynasty (c.1700 BCE – c.1100 BCE). This period puts Chinese sword origins in line with European origins. Straight and double-edged Chinese swords (jian) date from the 7th Century BCE. The Chinese Jian was used by the people of Japan between the 3rd and 6th Century BCE before Japanese people began to adopt Korean swords and then develop their own famous designs.

During the Ming Dynasty (1368CE – 1644CE) swords were less prominent on Chinese battlefields due to the preference for a variety of bows and polearms. The popularity of polearms also meant that Chinese swords tended to be short one handed weapons. Nonetheless, the wealth of the Ming Dynasty brought a wide variety of new sword designs. Ming swords were often associated with status and ceremony, and particularly with scholarly achievement. They were considered to be among the weapons worn by gentlemen.

The earliest Chinese paired swords appeared during the early Qing Dynasty (1644-1911). They were known as shuang jian (paired swords) or yuanyang jian (loving couple swords). The swords were designed to fit neatly back-to-back into one scabbard. The hilt of each sword would be a half of a hilt longwise so that they could fit together in their scabbard appearing as one sword until unsheathed. For the same reason, each sword would have one ridged side and one flat side. They were intended to be used with one in each hand and were typically double-edged. These paired swords are related to the butterfly knives used in Chinese martial arts today.