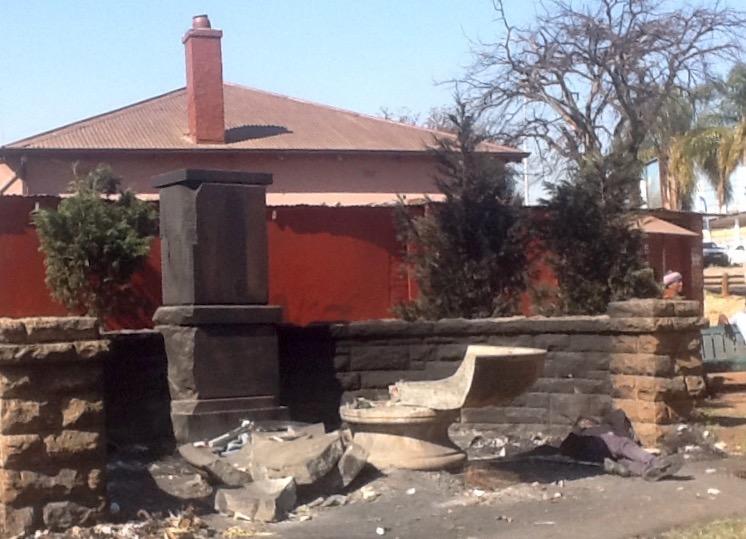 On 26 July 2018 concerned stakeholders including representatives from the Johannesburg Heritage Foundation (Kathy Munro), the Kensington Residents Association (Isabella Pingle) and the  Johannesburg East Joint Plans committee (Andre Marais) met with Eric Itzkin, Zoleka Ntobeni, Councillor Carlos Da Rocha and Cebo Mhlongo of the City. We paid a site visit to the Bez Valley War Memorial. This is the First World War War memorial commemorating the 64 men of Bezuidenhout Valley who lost their lives while fighting or serving on battlefields and theatres of war in France, South West Africa, East Africa, North Africa and the Middle East. They were soldier volunteers for the British Empire and Allied cause in the war against Germany and the Central powers between 1914 and 1918. The first name on the central panel of names on the granite plinth was Sir George Farrar of Bedford Court who died following a tragic railway accident in the South West African campaign. 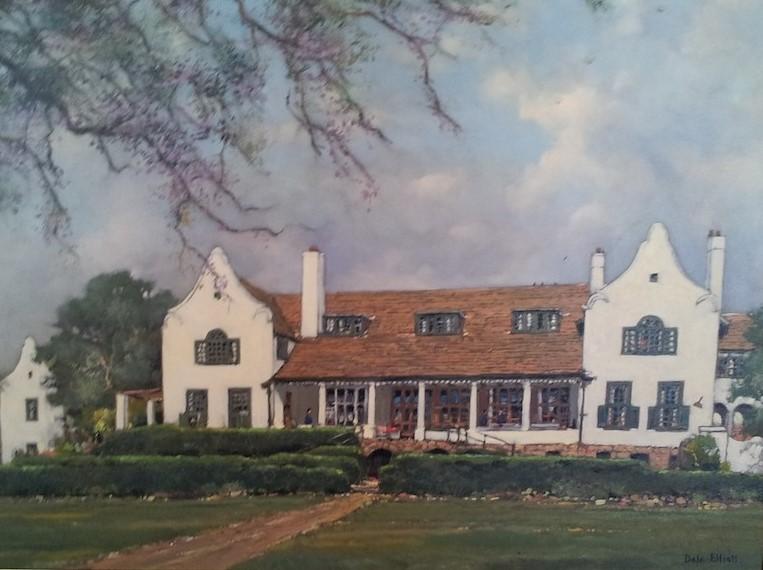 The men commemorated on the memorial were all white and many of immigrant descent or first generation South Africans. Those were the racial, cultural and social restrictions of that era. Black members of the SA Native Labour Corp who were also volunteers and service men are now remembered and commemorated at various memorials across the city and all who served are remembered at the Cenotaph on Beyers Naude Square. The City owns the Bez Valley Memorial and are responsible for its upkeep and preservation. 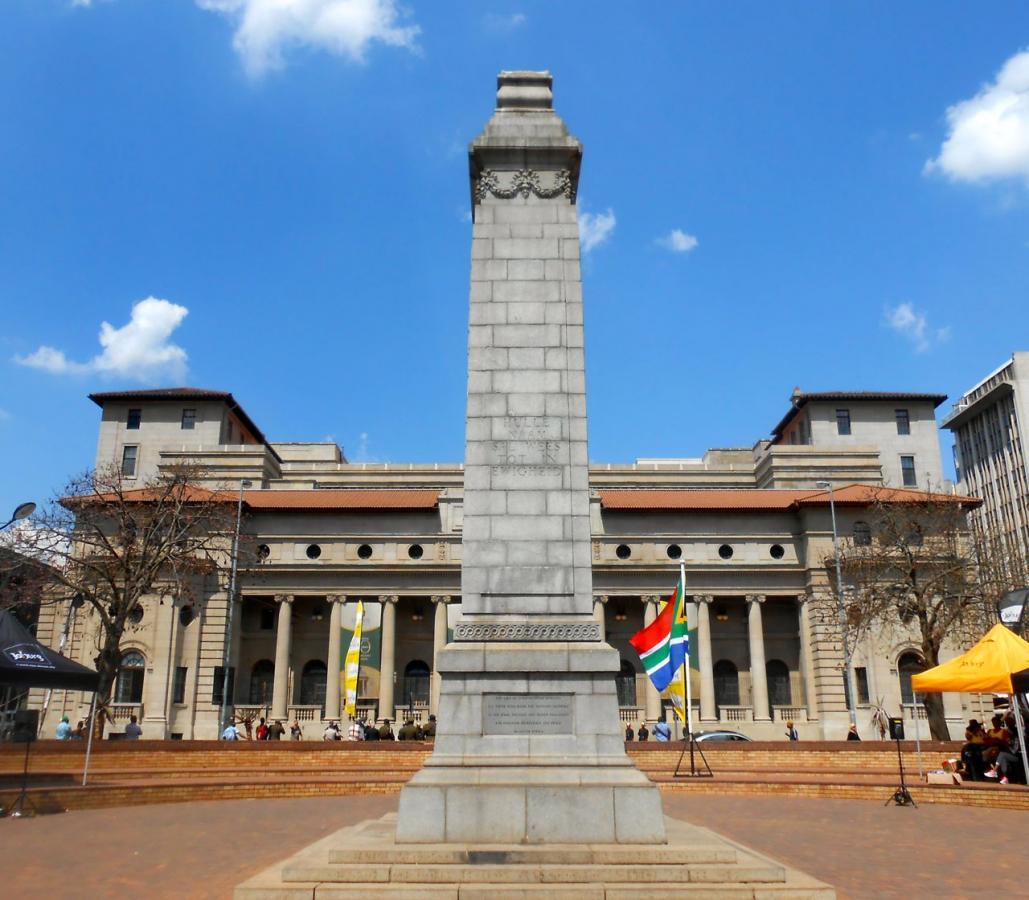 I first photographed the names on the war memorial in 2014 and using those photographs I have embarked on a project to record as much information as possible about each and every man using the Commonwealth War Graves Commission data and the South African War Graves Project data. Once completed I shall publish all the information on the Heritage Portal so that we keep on remembering the men and this memorial.

2014 was the centenary of the outbreak of World War 1 and the Johannesburg Heritage Foundation, Flo Bird, the City of Johannesburg and local community stakeholders  combined forces to restore the memorial and plant the new background conifers. The area was problematic four years ago but nothing like today. In a short period of time there has been a massive deterioration, despite all the improvements in lights, paving, benches, litter bins, cleaning, trees etc.

Although there have been ongoing efforts to keep this memorial as a site of memory and to continue to commemorate the sacrifice of the lives of young men in warfare, a month ago the memorial was vandalized and heavily damaged (click here to my read my article on the destruction of the memorial). I wonder if the city has an insurance policy to cover such loss? 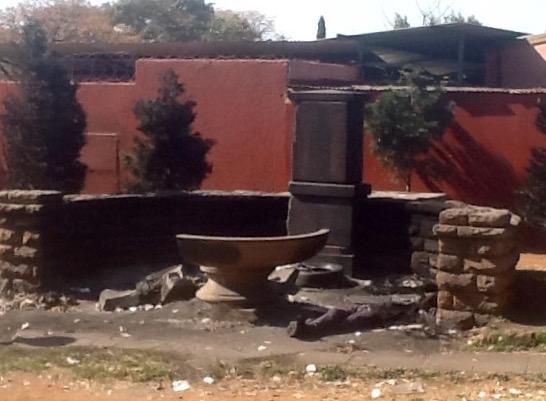 The small park is in poor condition, neglected and desecrated. There is litter and filth everywhere. Efforts to restore and place comfortable solid green metal benches have failed. The vagrants, the homeless, the unemployed and unemployable gather here; it is an open air drinking spot. There were perhaps 20 odd people, idling and killing time during our visit. For these people the memorial has no value. Sadly here in microcosm is Johannesburg humanity at its most desperate. As I walked towards our meeting spot, I tried to take a few photographs with my iPad whereupon one man, clearly under the influence of drugs or liquor, screamed "you are not allowed to take photographs here". Nearby there was an unconcerned couple having their lunch and a drink at a table under an ancient palm tree... seemingly oblivious of the appalling conditions for their picnic. The grass has not seen water for months and there are no flowers. A hardy highveld weed, litter and smashed beer bottles make for a new ground cover. A relatively new metal bench on what was once a grass verge has been twisted and smashed looking like a modern art installation (someone wanted to recycle the metal but failed in the  effort). 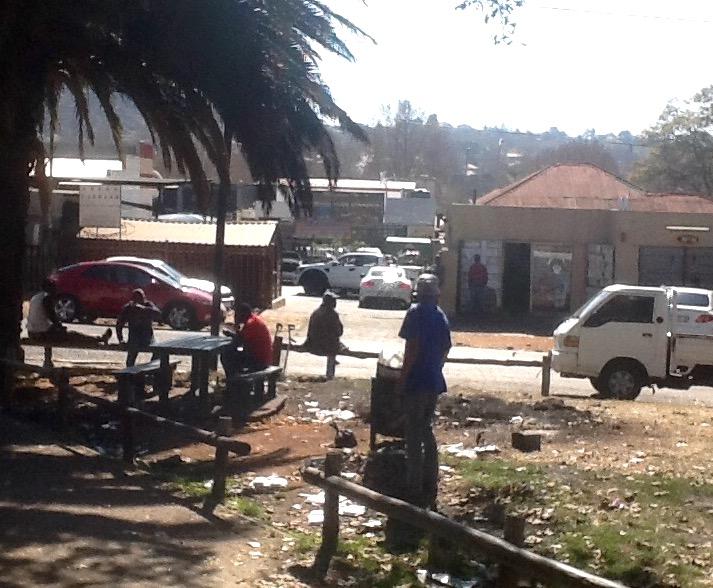 A popular drinking spot near the memorial (Kathy Munro) 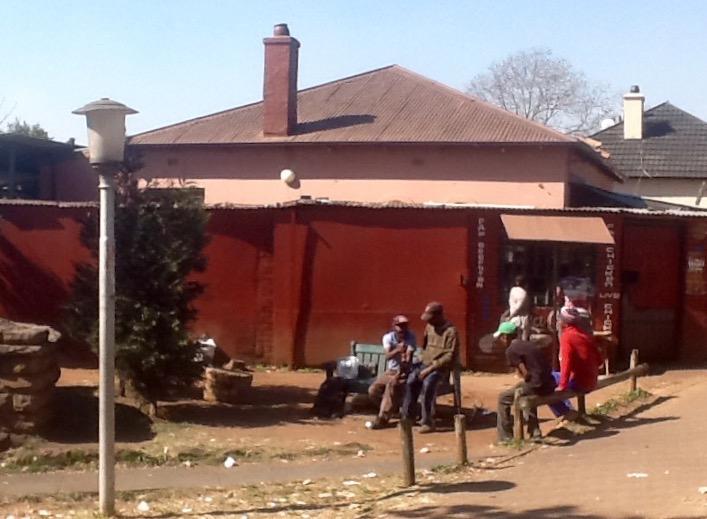 Our delegation inspected the site from the pavement edge of Kitchener Avenue and we discussed what is to be done. One person in our huddle argued for immediate removal of the memorial and asked whether there were city funds to effect removal of what is left of the memorial "this weekend". A senior municipal director argued for a fence and keeping out the vagrants. I explained that one has to see the site in the context of the current surroundings... urban decay and hopelessness has taken over. We have lost the heritage fight. To save the memorial it has to be moved. For the memorial to stay where it is an environmental and social revolution is needed and I believe this is beyond our city.

The city's own planning by-laws about selling liquor and opening businesses would need to be enforced. The urban fabric would need to be redesigned. New investment would need to be secured. It's not going to happen. Commitment, willpower and capital are lacking. There would be a massive outcry if the city decided to close all the illegal enterprises in the area that provide a livelihood for several families. It is sad to concede defeat in the face of the pervading urban conditions of poverty and visible environmental decay. But I have got over the heartbreak. We arrived at a consensus that the memorial would have to be moved. We are a group of concerned practical people.

One option for relocating the memorial that we visited was the army unit headquarters down Langerman Drive in Kensington, It is located in what was once the old Queens High school. However, we all favoured keeping the memorial in Bez Valley.

We continued on to Bezuidenhout Park. This fine city park dates back to 1949 and prior to that it was the farmhouse and farm of the pioneering Voortrekker Bezuidenhout family. Over time the farm was parceled up and sold for the development of the north eastern suburbs. What remained was a large expanse of farmland where successive generations of the Bezuidenhout family lived well into the 20th century. During the Anglo Boer War after the occupation of Johannesburg by the British, the farm was a remount camp for horses and soldiers. There is a blue plaque on the original farmhouse and not far away is the old family graveyard. There is now a large parking area and it's a popular, sometimes riotous picnic spot especially at New Year when music echoes across the Valley. 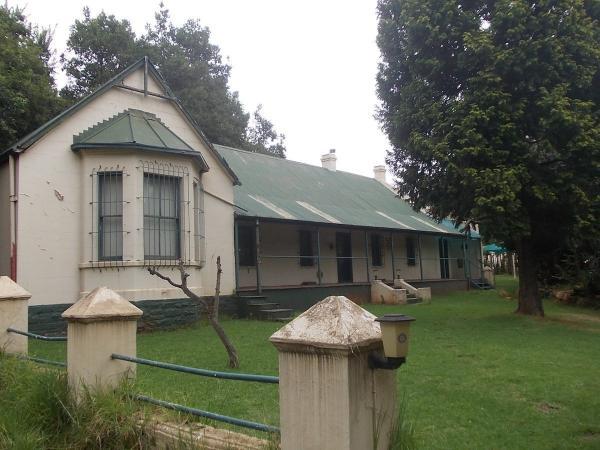 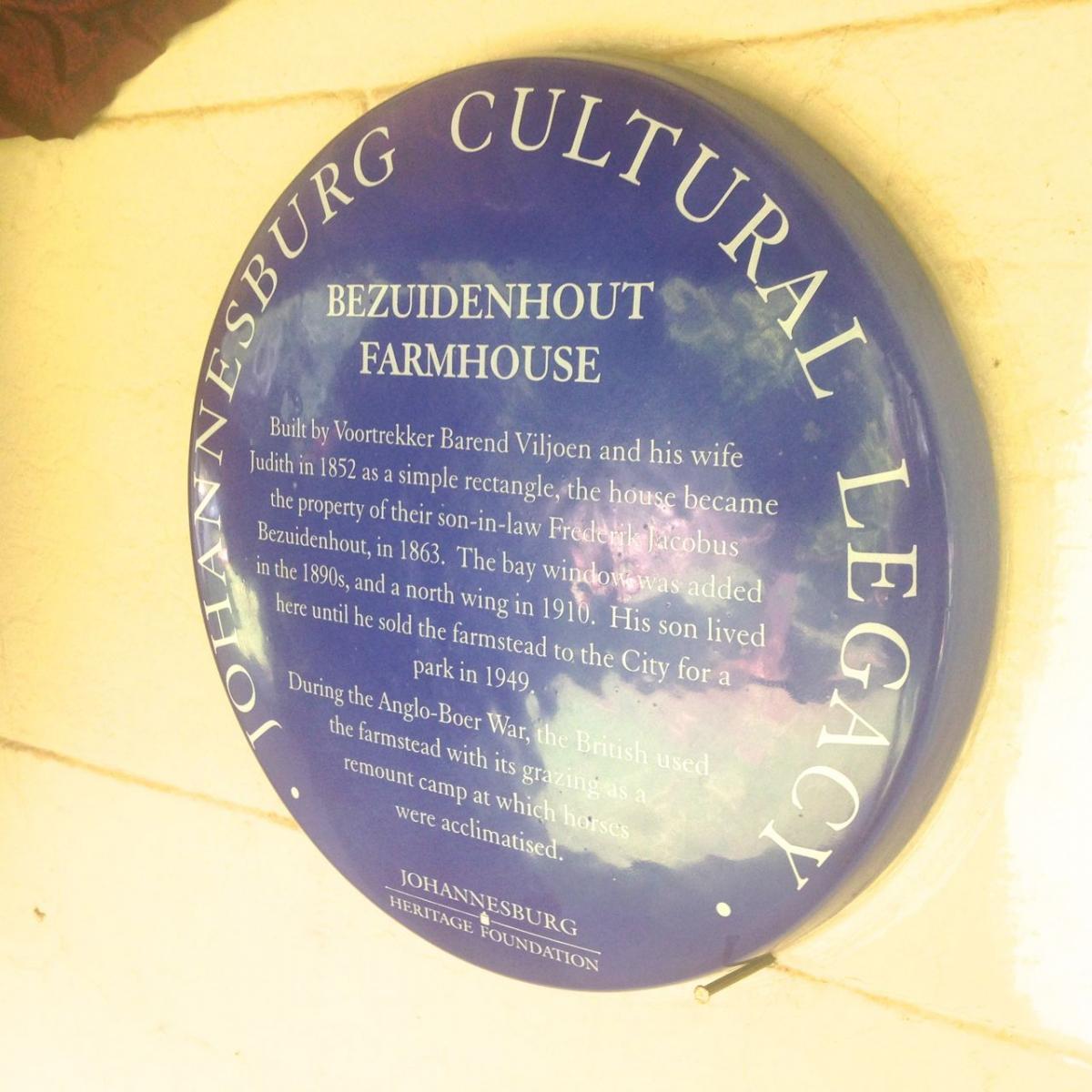 Once a week a 5km city run through the park attracts hundreds of people. Rotary now occupy one of the old farmhouses and the other is occupied by City Parks employees. Both the farmhouses cry out for restoration and tender loving care but they are holding on. There is a fine old farm wall surrounding the original garden.

We decided that this is the right spot for the relocation of the memorial. The war memorial can be positioned within the palisade fenced garden close to the principal farmhouse. It could be saved for future generations. There is security, fencing and a people presence. It is accessible but protected. 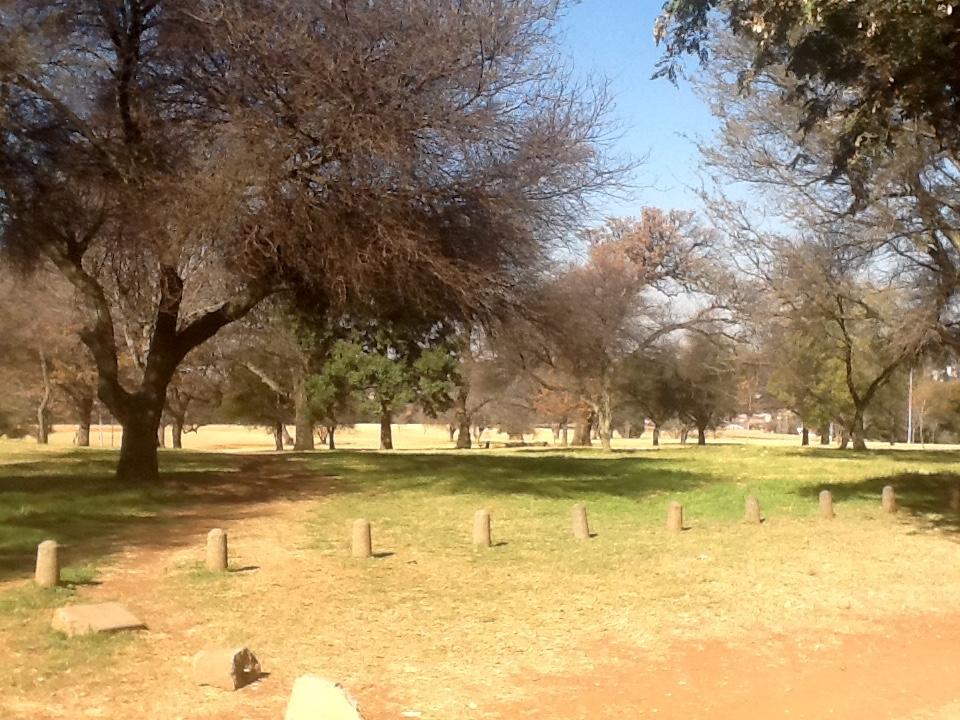 A strong motivation and a heritage impact study must now be put together and an appeal made to the City and Provincial Heritage Authorities to allow the Bez Valley Memorial to be moved, restored and recreated. A costing exercise will need to be undertaken and City budget allocated.