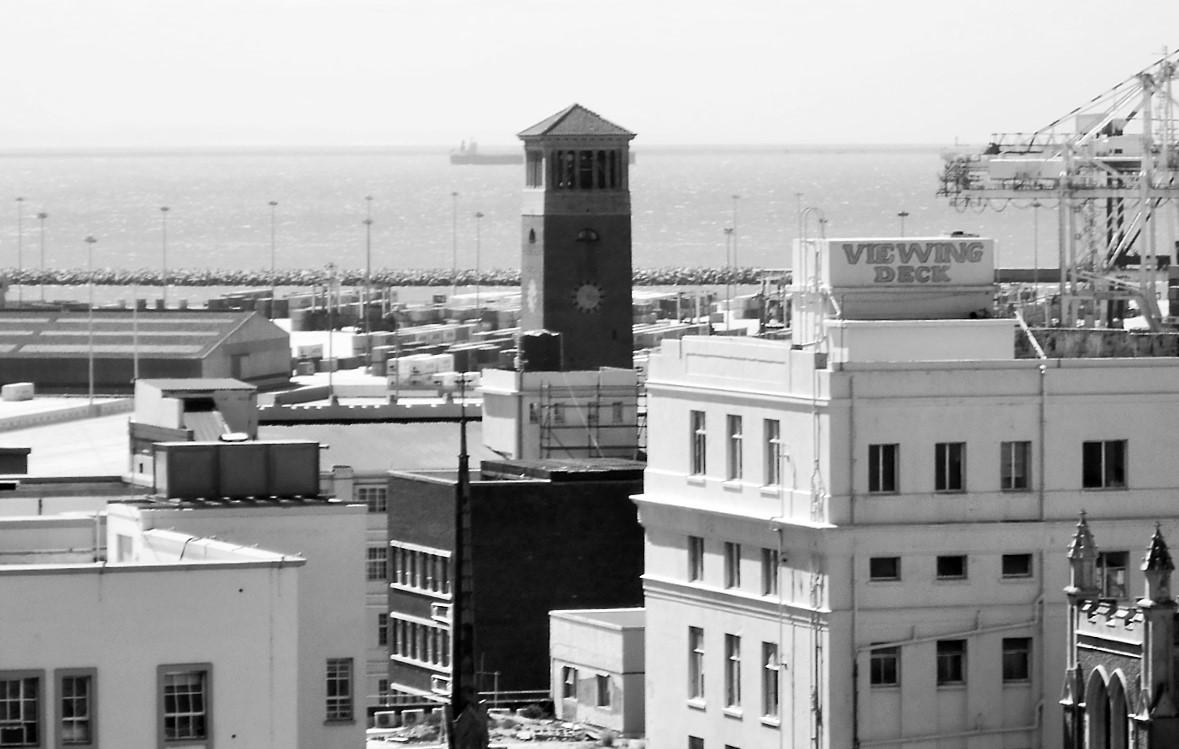 One of the most striking buildings in Port Elizabeth is the famous Campanile. In the article below, Tennyson Smith Bodill reveals the history behind the creation of this remarkable structure. The piece was originally published in the April 1989 edition of Restorica, the journal of the Simon van der Stel Foundation (today the Heritage Association of South Africa). Thank you to the University of Pretoria (copyright holders) for giving us permission to publish.

South Africa boasts an impressive number of great buildings from most periods of the country's history. It also has many lesser known, but rewarding, examples of regional and vernacular architecture. Situated in Port Elizabeth, the Campanile, which is an adaptation of Florentine architecture, is a worthy contribution to our nation's architectural heritage. 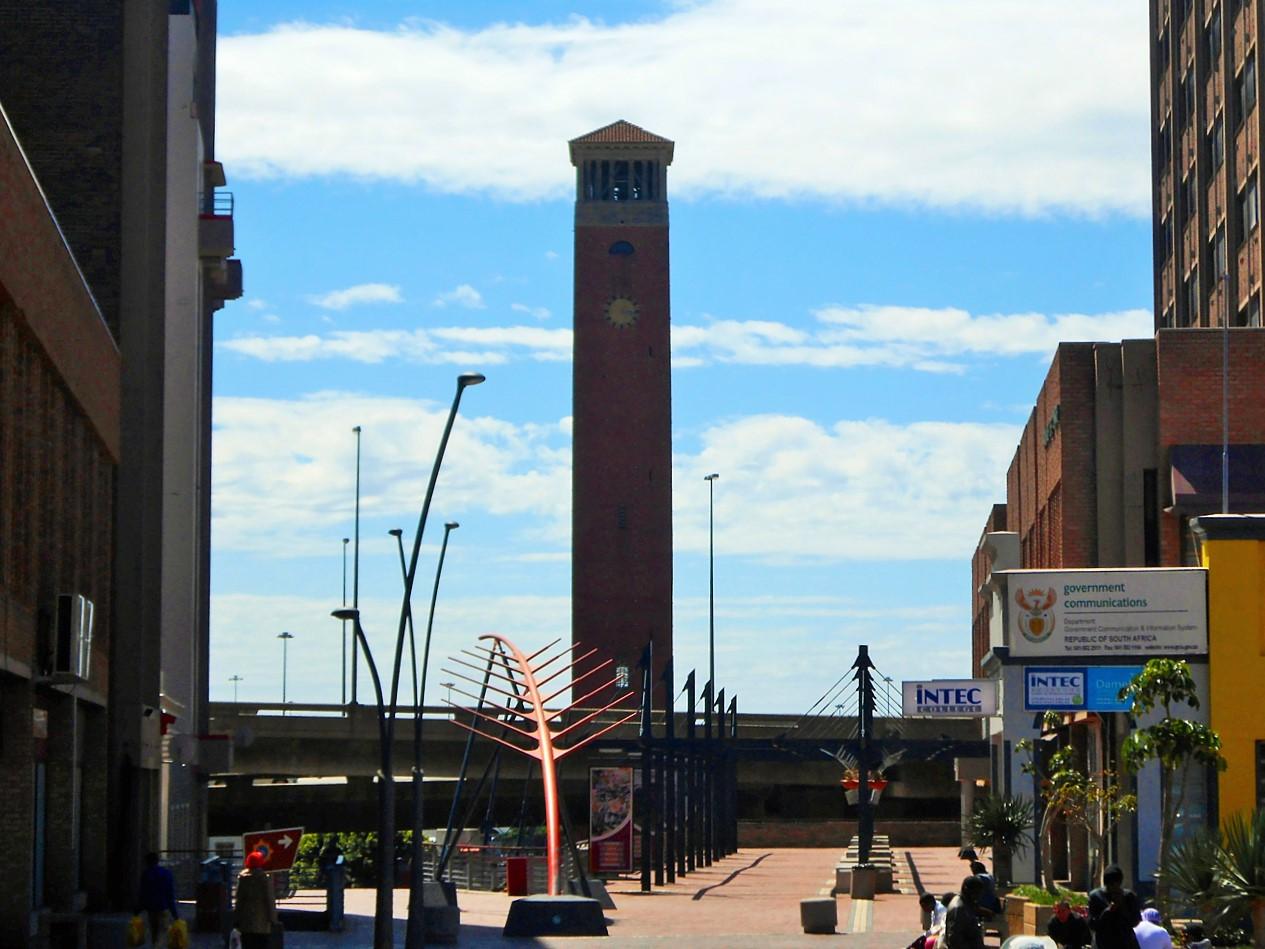 Observing the structure in its original concept and siting, one is struck by its dramatic form - dominating the entrance to the city when approached from the sea. When newly completed, the concept related well to the city which has a mixture of various forms of civic and commercial architecture, interspersed with warehouses.

The first proposal for a memorial tower to commemorate the landing of the British Settlers of 1820, was made in 1904 by the Reverend Alfred E Hall, minister of the Queen Street Baptist Church. At the time it was proposed to rebuild the Church, and the minister had the idea of incorporating a lofty tower which would serve as a memorial to the Settlers.

At first the scheme was met with enthusiasm. The mayor of Port Elizabeth, Councillor J C Kemsley, became the vice chairman of a committee, and Lord Milner and Sir Walter Hely-Hutchinson, the then governor of the Cape Colony, became patrons. However, strong objections were raised to the memorial being associated with one particular church and also to the fact that the site was nowhere near the original landing-site. After three years of controversy the scheme was abandoned in 1906.

The scheme was revived at the time of the Centenary Celebrations of the landing in 1920. In that year the Midlands Area Committee of the 1820 Memorial Settlers' Association raised the question of erecting a suitable memorial on the actual site of the landing of the Settlers in 1820, or as near to it as computation and real estate allowed. A committee for this purpose was appointed, consisting of Norman E Harris (councillor), Alexander Fettes (mayor of Port Elizabeth), Frank Pickford Marriott (head of the Art School), Aeneas R Pennacchini (memorial sculptor) and William John McWilliams (architect). Within a month the committee had decided on the type of memorial tower required, and also on the site - the landing place of the Settlers at the foot of Jetty Street.

The foundation stone of the Campanile was laid with great ceremony by H R H Prince Arthur of Connaught, governor of the Union of South Africa, on 9 April 1921. A naval detachment of Admiral Goodenough's flagship H M S Dublin formed a square around the site, and a mounted detachment of the South African Police provided an escort for the entourage. The guard of honour to welcome the Prince was provided by the newly-constituted Prince Alfred's Guard Regiment.

A competition for a design for the tower, which was open to the whole of South Africa, was organised, but all the entries - especially the accepted design submitted by F G Mcintosh - were found to be too costly. The well-known Port Elizabeth architect, W J McWilliams, with the consent of Mcintosh, then offered his services in an honorary capacity to design a simpler edifice.

William John McWilliams, RIBA (1873-1950), was born in County Tyrone, Ireland, and came to South Africa with his parents as a child. He attended school at the Grey Institute at Port Elizabeth and in 1890 was articled to a local government land surveyor, engineer and architect, George William Smith, AMICE. During his apprenticeship he studied land surveying under Arthur M Matthews at St Andrew's College, Grahamstown.

In 1895 McWilliams moved to Johannesburg where he joined the firm of Carter and Mcintosh of Jeppe Arcade, serving as an architectural assistant until the outbreak of the South African War. A long and successful partnership was started in 1901 when McWilliams joined up with Victor Thomas Jones, MIA (London), FRIBA (1864-1946), who was a specialist in Art Nouveau architecture. Jones was a former architect and designer of interior decoration to Liberty & Co of Regent Street, London. The engineering and architectural experience of McWilliams and the creative, artistic ability of Jones, formed a harmonious balance in the partnership, and several of their designs were exhibited at the Royal Academy

The two young architects left Johannesburg soon after the partnership was formed to set up practice in Port Elizabeth. Their first commission there was to design the Victoria Memorial Home for the aged. This commission was followed by other notable projects such as the King Edward Mansions, built in 1903, the Port Elizabeth Club and the Harbour Board Building, both completed in 1904. These buildings are strongly infused with Art Nouveau feeling. 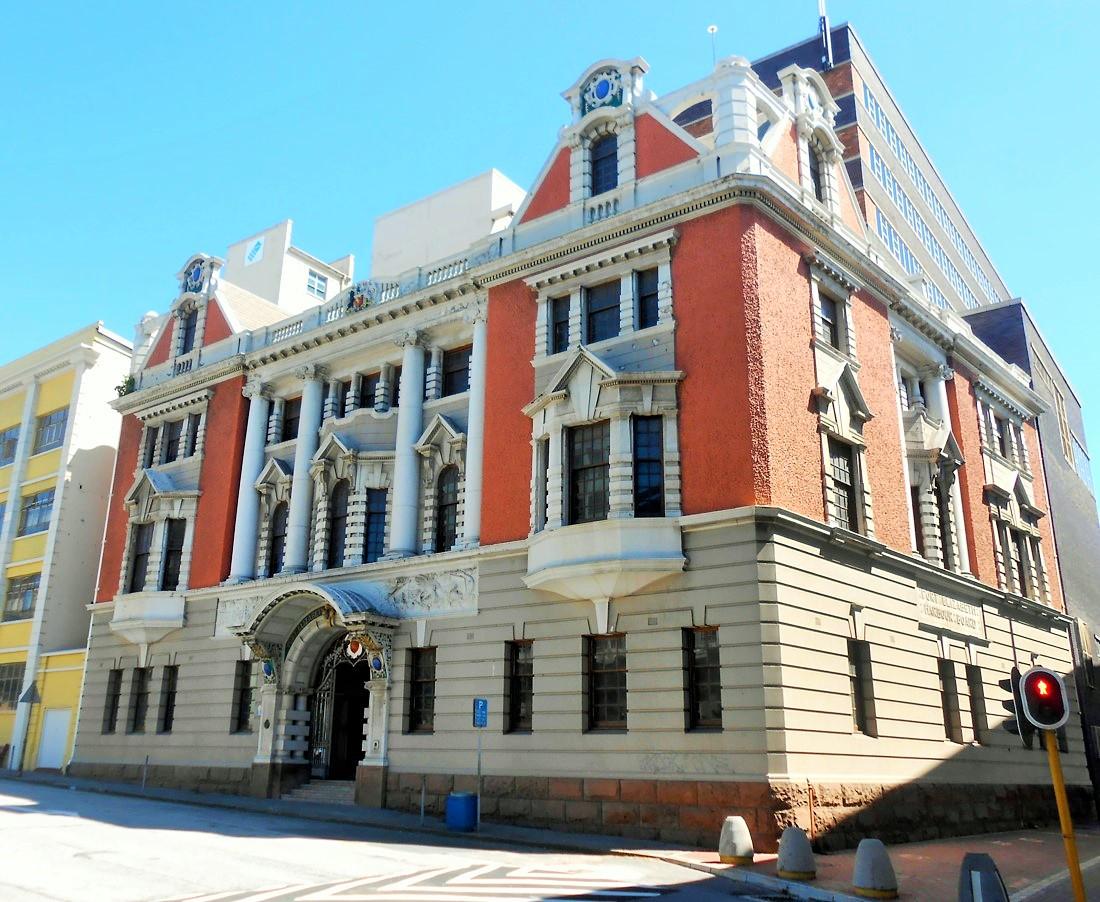 The Harbour Board Building (The Heritage Portal)

Early in 1913, a competition was held for architects' plans for a new Grey High School building and Boarding House in Mill Park, Port Elizabeth. The designs produced by Jones and McWilliams were chosen as the most suitable. The Imposing Grey High School and Boarding House, which were completed in 1915, were built in the traditional Cape Dutch idiom and the composition of the buildings are aesthetically pleasing. Both buildings were designed to be in harmony with each other, and are linked by a cloister. The school building is wholly dependent on the prominent voluted concavo gables, dignified central clock tower, shuttered windows, colonaded porticoes and shaped parapets for its beauty.

During his architectural career McWilliams used classical styles with great competence and adopted the shape of an Italian renaissance campanile for the memorial to the British Settlers.

The design for the Campanile was approved on 10 March 1922, and the contract for building the structure was subsequently awarded on 18 march 1922 to a local firm of builders, Harris and Harrower Limited, whose tender was £6 150.

Work on the Campanile commenced on 27 March 1922 and took approximately eighteen months to complete. During construction the foundation stone, laid by Prince Arthur in April 1921, was relocated to its final position on the west wall of the base. The dressed stone used to construct the base was taken from some of the oldest buildings in the city and the arched main doorway was built of stone quarried at Grahamstown. For the rest, the tower is of brick and reinforced concrete. Special care was taken in carrying out the brickwork; each brick was subjected to a severe test before being used. The structure, both base and belfry, is of local brick faced with smooth, red Grahamstown bricks. The roof tiles were obtained from Grahamstown.

Architecturally, the composition of the Campanile is well-proportioned, lofty and slender, being almost classic in its simplicity. The structure is reminiscent of the famous St Mark's Campanile in Venice, which is 320 feet high. The Campanile in Port Elizabeth is 170 feet high from natural ground level to the tip of the pyramid roof. The area of the structure at the base is 23 feet square, its foundation resting upon sea-worn rock. The windows at various floor levels are fitted with decorative precast concrete grilles and the belfry, with its composite columns and tiled roof, is logically designed and thoroughly pleasing to the observer. There are eight floors within the tower and to reach the observation floor, which is approximately 136 feet above the floor level of the reception area, the visitor has to climb 204 steps. The frieze of the reception area is artistically inscribed with brief details of the events connected with the erection of the Campanile.

The Campanile is certainly a unique monument to the British Settlers. At the dedication ceremony on 6 November 1923 the architect, McWilliams, stated that he "endeavoured to embody in the design the simplicity, restraint and dignity which are symbolic of the character of those men and women whose landing at Algoa Bay it commemorated".

H R H Prince Arthur of Connaught returned to Port Elizabeth on that day to open the tower officially. The tower had been erected at a final cost of £5 940, but there was as yet no clock and no bells for the proposed carillon, and efforts were set afoot to raise funds for that purpose. Eventually, a clock specially manufactured by Joyce of Whitechurch, England, was installed by a local firm of clock and watchmakers, J Joseph and Sons, and was set going at 12 noon on 28 April 1925. This clock, which strikes the Westminister chimes, has four large dials and the movement is driven by means of a pendulum and drive-weight which is wound every Friday. The strike mechanism, manufactured by that fine old English firm of clockmakers and bellfounders, Gillett and Johnston Limited of Croydon, Surrey, was installed during 1936 when the bells were hung. 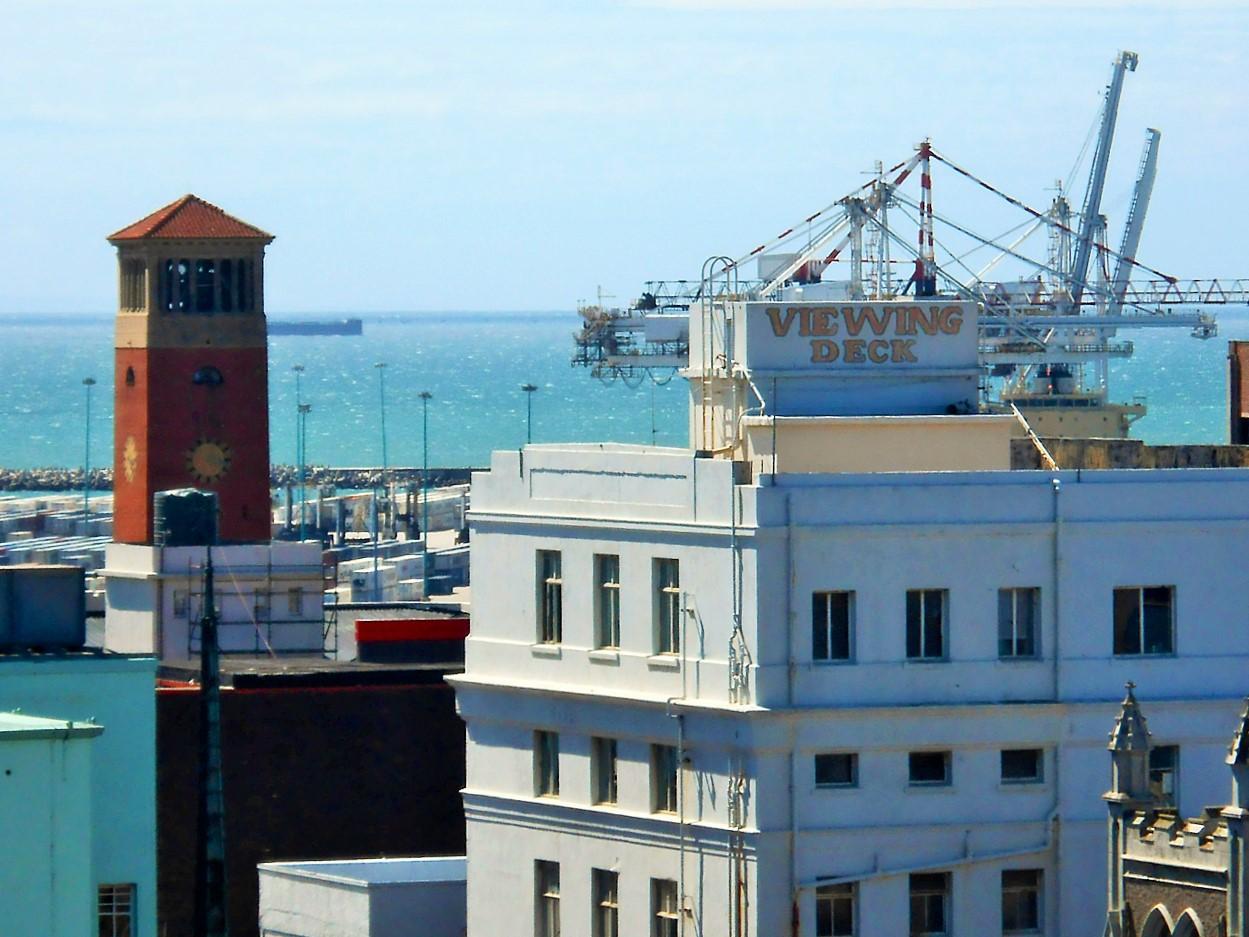 A distant view of the Campanile (The Heritage Portal)

Up to 1925, the tower had been under the control of the Midlands Branch of the 1820 Memorial Settlers' Association, but in 1926 it was handed over into the custody of the Port Elizabeth Municipality to be maintained and preserved for future generations.

The campaign to raise separate funds for bells continued however, and it was with considerable excitement that the Port Elizabeth Advertiser of July 1936 carried a long-awaited announcement concerning the bells. During the intervening years only £850 had been available for the purpose of installing bells. This was the year, however, when all the British Empire was celebrating the Silver Jubilee of King George V and the installation of the desired carillon seemed a fitting expression of gratitude for the sovereign's memorable reign.

The citizens of Port Elizabeth rallied to the occasion with the same persevering spirit exhibited by the early Settlers they were honouring. The steady growth of funds and generous contribution from the City Council, ultimately enabled the municipality to obtain the bells from Gillett and Johnston Limited. These bells, with a gross weight of over 16 tons, comprise one of the largest carillons in South Africa and the firm felt justified in stating that they had exceeded all previous standards and that, they asserted, " ... it is the finest carillon of bells ever turned out before for sweetness of tone and volume. There is not another in the world like it in that respect".

The largest bell in the carillon is approximately 6 feet in diameter and weighs between three and four tons. The bells were hoisted into position in the belfry during July 1936 and the first recital on the carillon was given on 9 September by Lionel Field, Mus Bac, ARCM.

All but six of the bells were contributed by descendants of 1820 Settlers as a tribute to their forebears, or by others who wished to honour their memory. Particulars embossed on each of the 23 bells are engraved on a brass plaque affixed to a wall in the reception area of the Campanile.

Although the Campanile is partially overshadowed by the Settler's Freeway, it remains a focal point of the city's built environment. Rarely has a building been as synonymous with a city. The citizens of Port Elizabeth hold the Campanile in affectionate esteem and its preservation is highly desirable.