The railway line between Wolwehoek and Heilbron 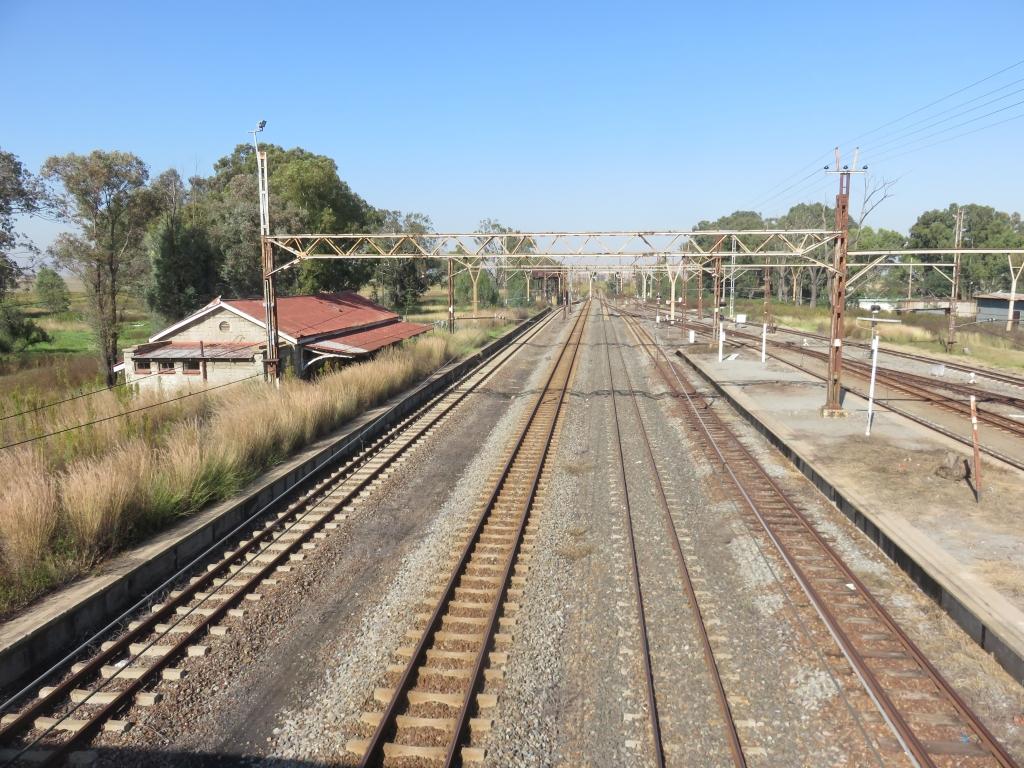 Wolwehoek is a railway station on the Vereeniging-Bloemfontein line to the south of Sasolburg (see photo above). The railway between Wolwehoek and Heilbron was part of a longer line which connects further down to Petrus Steyn, Lindley and joining the mainline between Bethlehem and Bloemfontein at Arlington. This article is about the section between Wolwehoek and Heilbron, a distance of about 50km. On the map below, dating from the time of the Anglo Boer War, it is the line marked in blue. 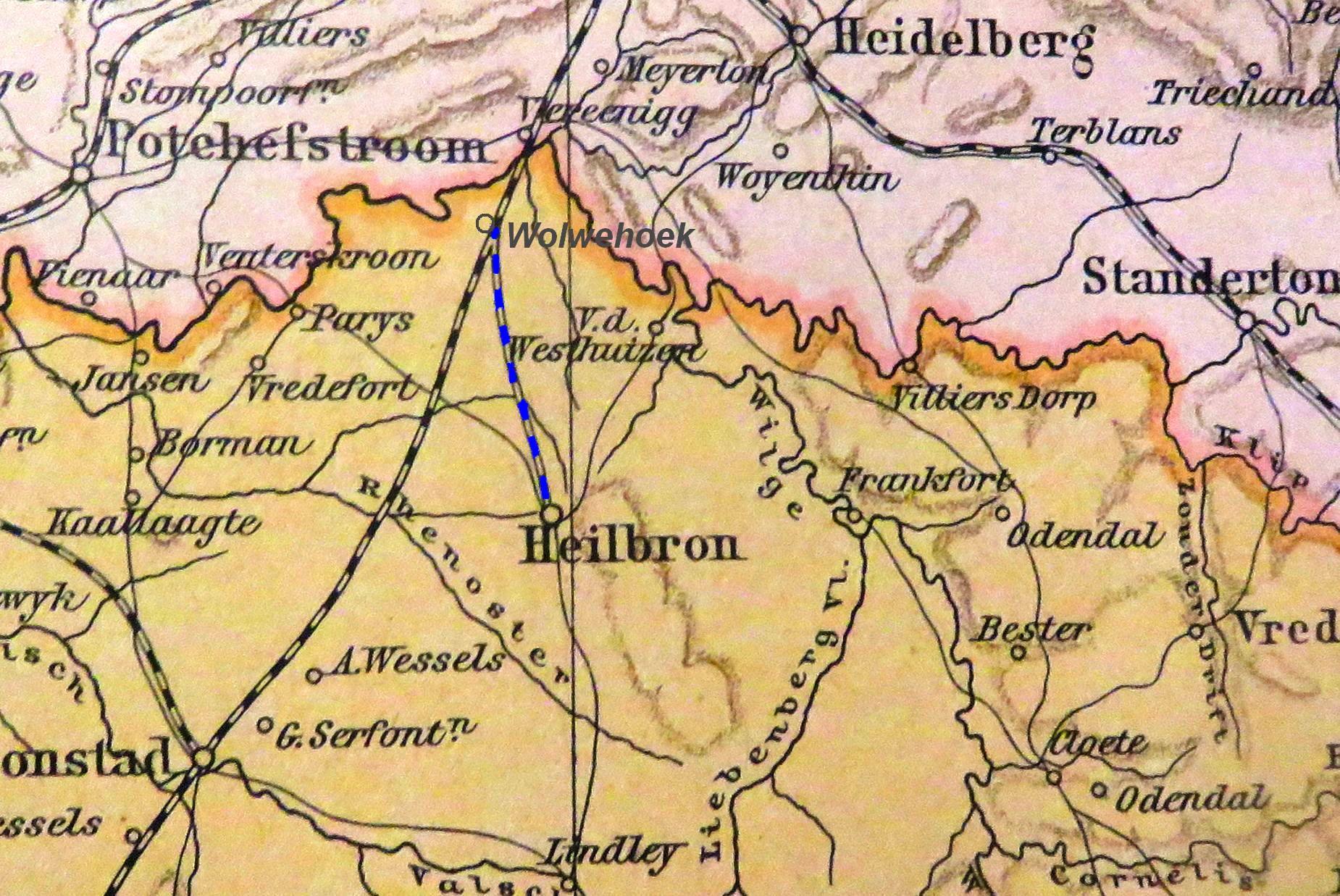 The line is not in use and the rails have all been removed. It is one of the older rail tracks laid just before the Anglo Boer War in 1898/99, at that time only up to Heilbron. The extension of this line came later, first to Petrus Steyn (1925) and in the thirties, to Lindley and Arlington. That line, from Heilbron to Arlington, still exists and is in use, but largely underutilised.

I will take you on a tour starting at Wolwehoek down to Heilbron.

At Wolwehoek Station was the branch off from the main line. The route can clearly be observed in the picture below taken from the top of the silos, it is to the right of the road. On the ground not much is still there, the switch has been removed completely, some of the rails are still there, well hidden in the grass. 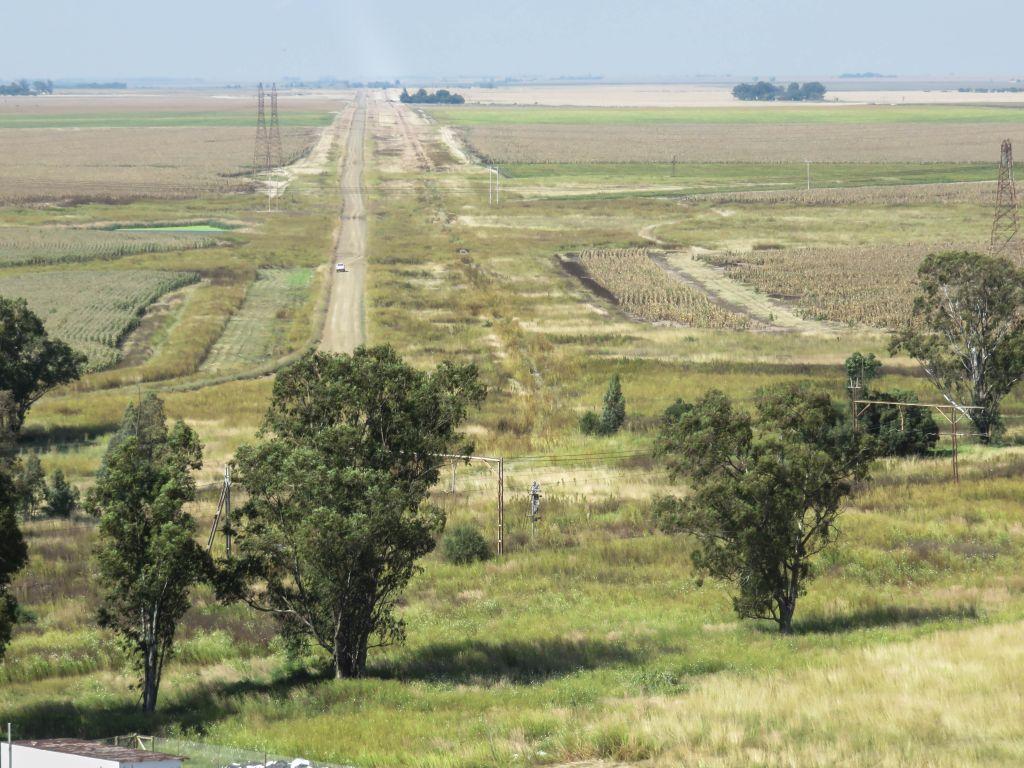 View from the silos (Horst Muller)

An empty ruin of what used to be the old station building, a sandstone construction, is still there. In former days a station not only served as a railway station, it was also an economic centre for the local farming community. The post boxes seen in the picture are witness to this, also in this building was the telephone exchange. And over the rails was the General Dealer of John Pierce. 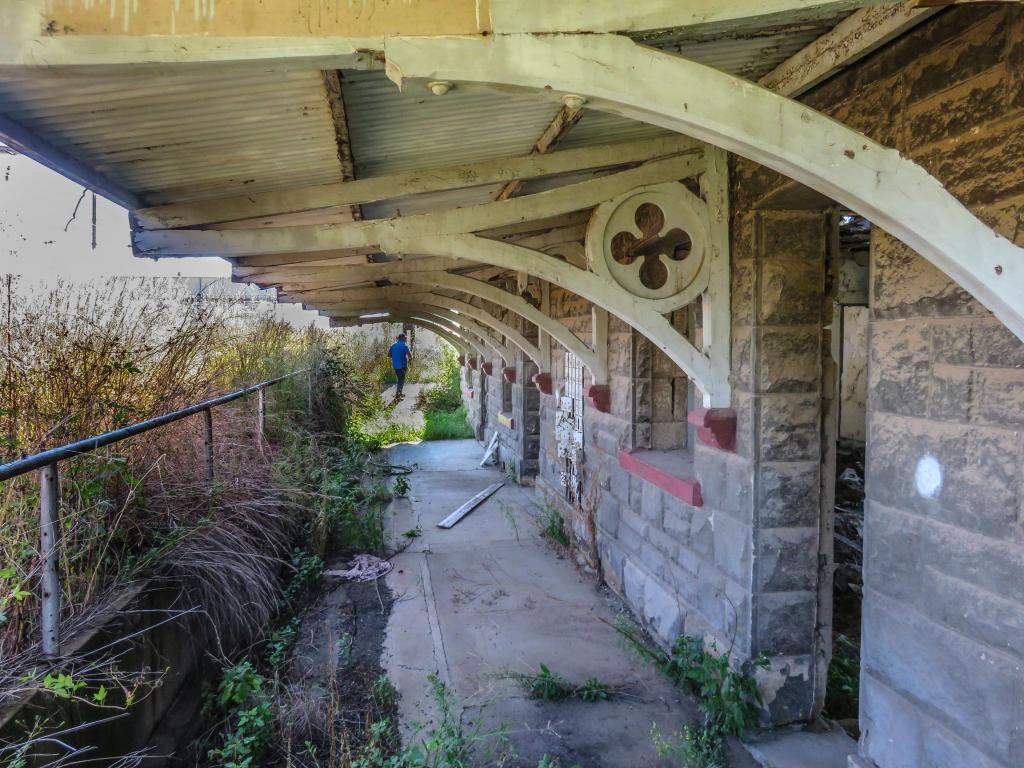 Later a new station building was erected and this one is still standing, also as a ruin. Until fairly recently it was a rail control center, this is gone, rail traffic is now controlled from a central rail control. Another relic of the past is the water tank to serve the steam locomotives.

Moving down the line we get to Trafford as the first halt out from Wolwehoek. It was at this place that we first noticed the rails being stripped by scrap collectors, that was in 2010. Long sections, measured in kilometers, were taken, The shopkeeper at the Skaapplaas Kontant Winkel (cash store) told us how the teams would come at night, one could hear them banging away and it was no use calling the police. And on occasions when the police did arrive the demolition teams would just disappear into the maize fields. 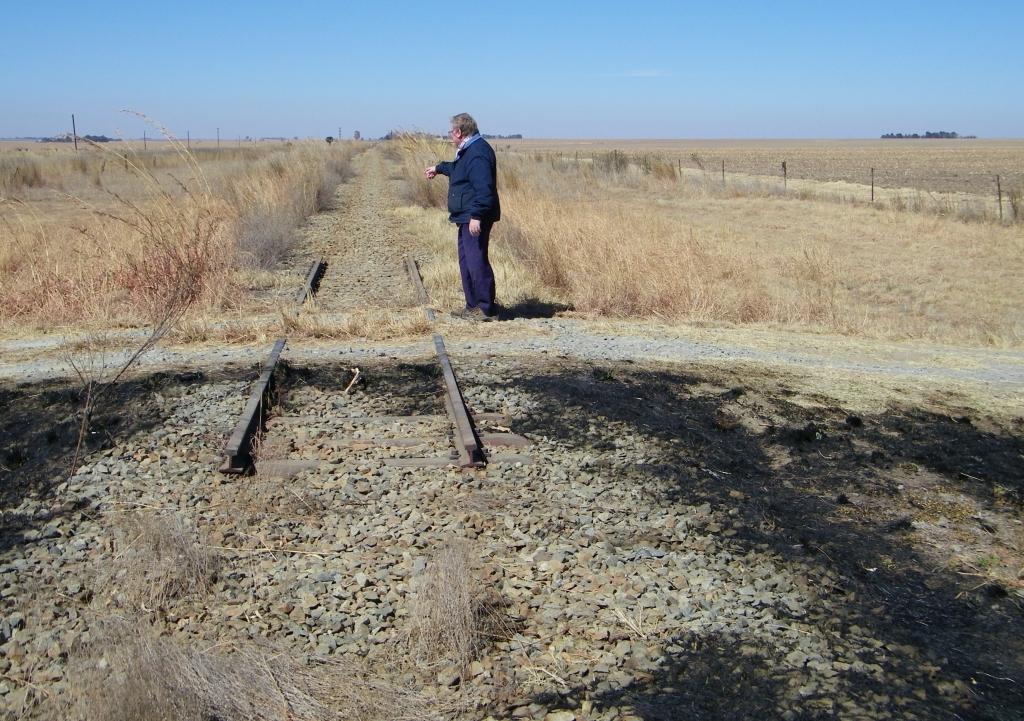 After Trafford there is Skaapplaas, Versien and Gottenburg. Skaapplaas was a siding, that is a side line where rail trucks could be parked for loading and off loading. The local farmers used the rail system extensively to get supplies and to dispatch produce. The remnants of the platform can still be seen. The rail car would be parked on one side of the platform and the other side would provide access for the ox- or horse drawn wagon. 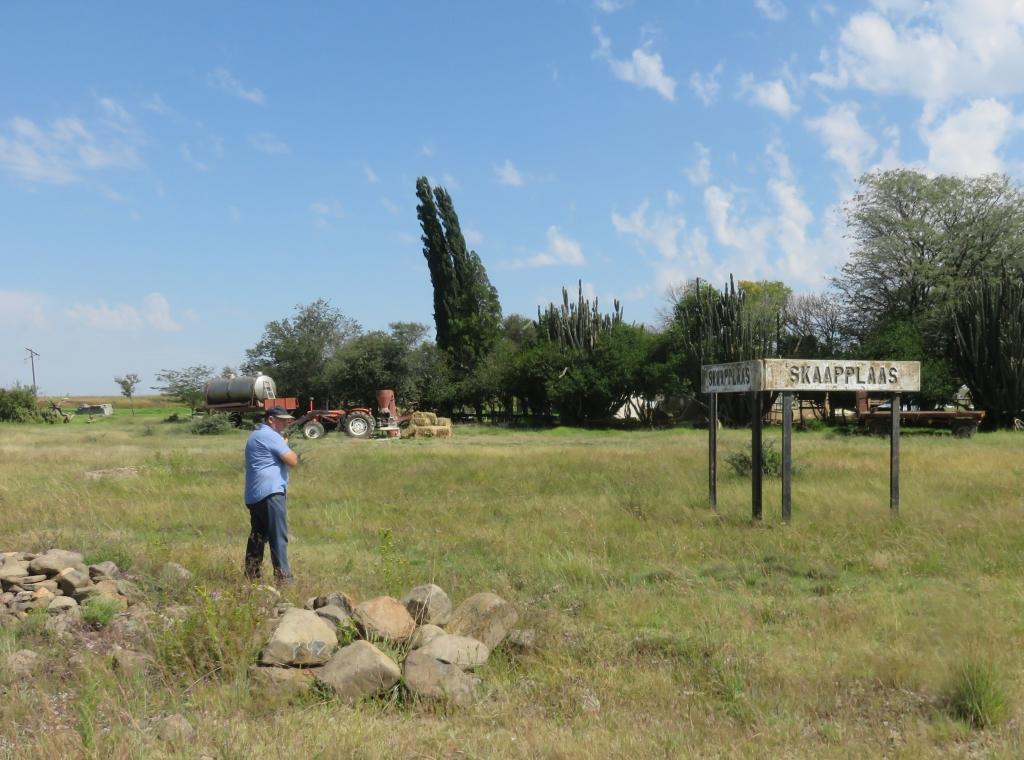 Just before Gottenburg (coming from the north) is the first steel bridge over an unnamed spruit. It is a single span supplied by the Union Bridge Co, more about this company to follow.

At Gottenburg are silos with a rail connection for loading. All that is left of that is a sign to warn private locomotives not to proceed beyond this point. Gottenburg was also a siding and was a bit of a centre with a general dealer and a school. None of these buildings still exist, just foundations. 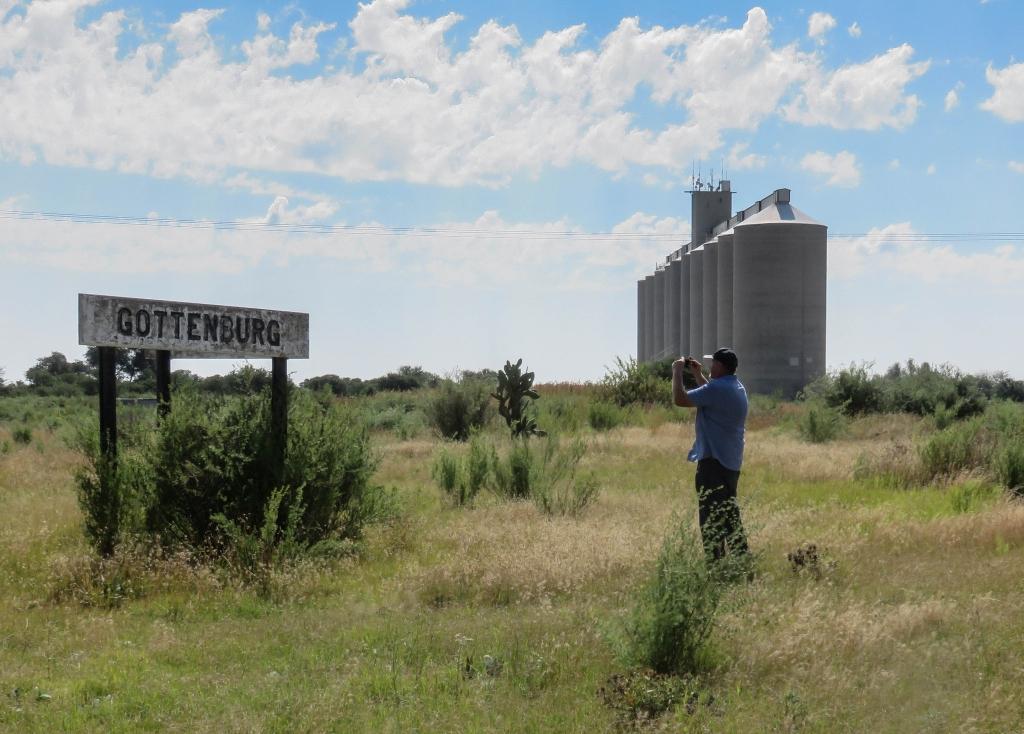 Soon after we get to the bridge over the Kromelmboogspruit. It is a substantial bridge consisting of three spans. It was supplied by the Union Bridge Co., as the nameplate, that used to be there, states. The address is given as No.1 Broadway New York, thus it came all the way from the USA. 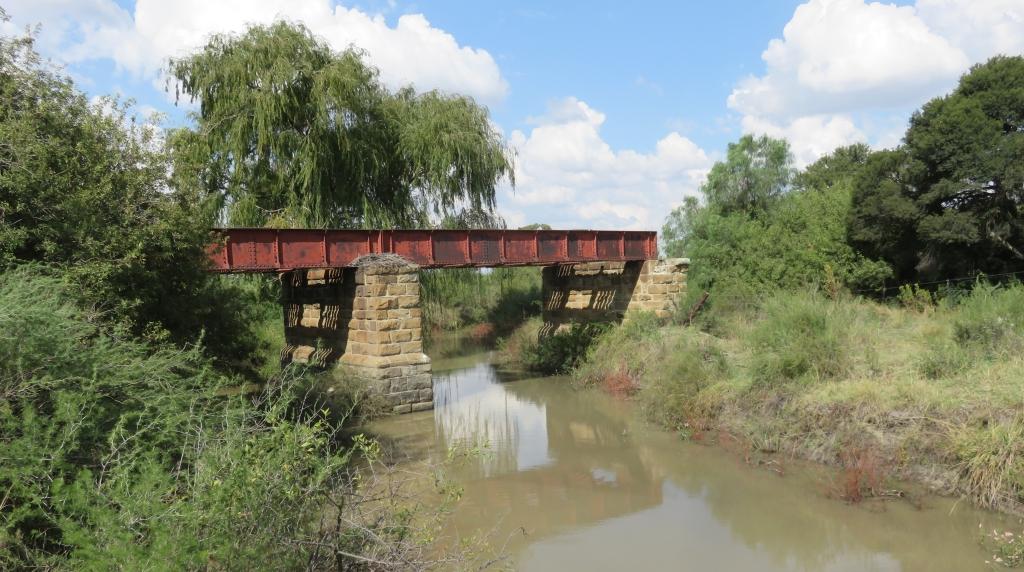 Bridge over the Kromelmboogspruit (Horst Müller)

During the Anglo Boer war (1899-1902) there had been an attempt by the Boers to blow it up. This was done by wedging a grenade under the line and to shoot at it from a safe distance to hit the fuse. The picture shows a piece of shrapnel found under the bridge. With that attempt, the bridge was damaged but not put out of action.

Piece of shrapnel found under the bridge over Kromelmboogspruit - Horst Muller.jpg 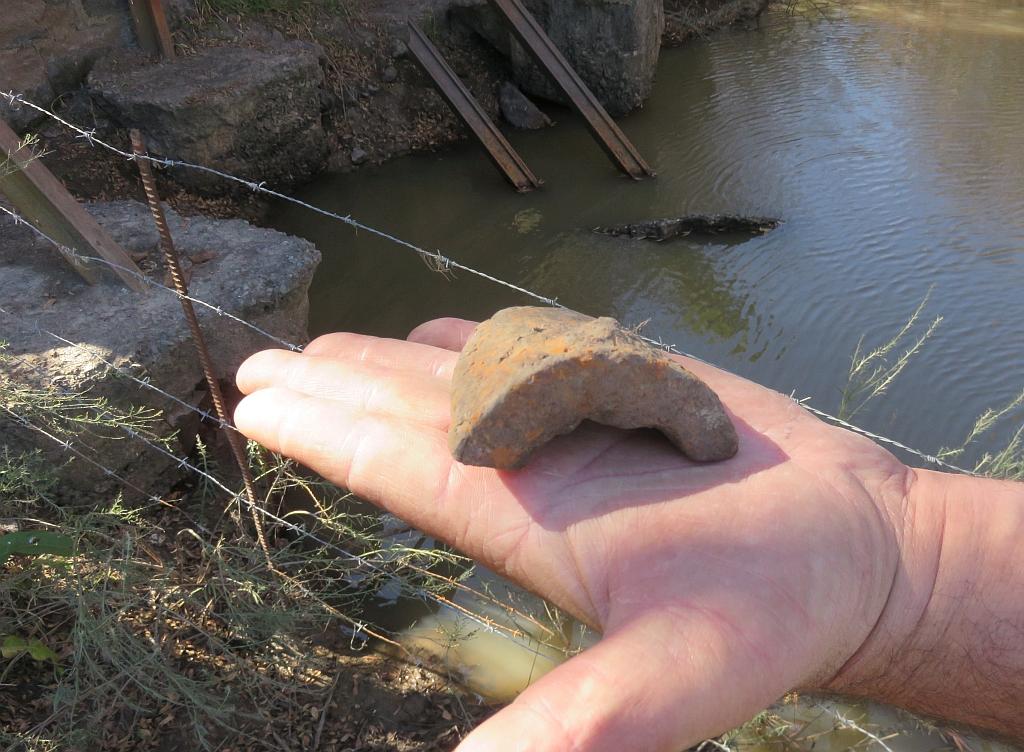 More than a hundred years later the scrap collectors managed to achieve what the Boer saboteurs did not. A whole span of the bridge has disappeared. Inspecting the scene, it was determined that a cutting torch had been used to disassemble it.

This bridge was actually the reason why the line was shut down. In the late 90s, there was heavy flood which carved out a channel under the line at the bridge. At that time the railways were already considering shutting down some of the smaller lines and decided not to repair the damage.

The next siding is Ryeford, to get there one has to pass through farming land. Nothing left except the railbed, the sign and the platform, all covered with vegetation (mostly cosmos) that has taken over. 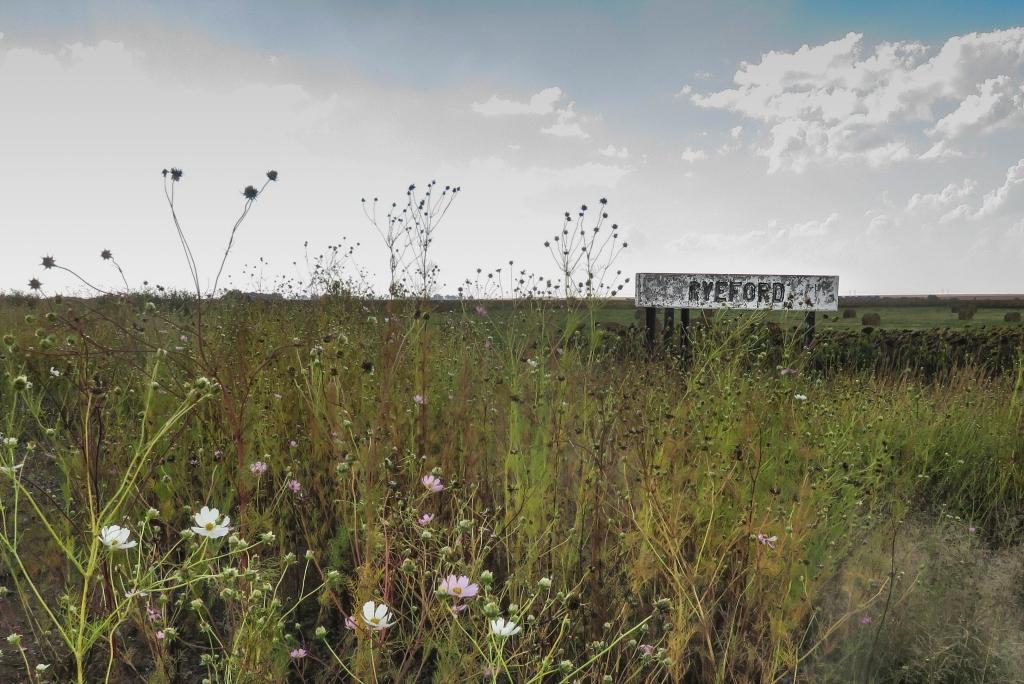 The bridge over the Elandsspruit is the ‘big’ one, the biggest of the line. Spanning 65 meters and 15m above the spruit. 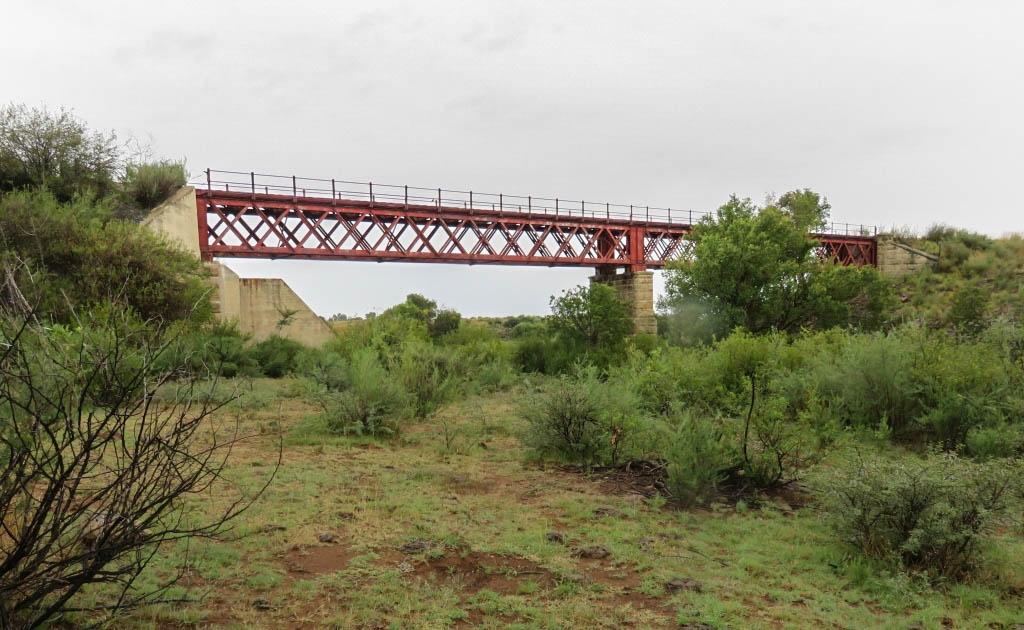 Bridge over the Elandsspruit (Horst Müller)

An interesting aspect of this bridge is that it was only completed after the line was opened. Near the bridge one can see the foundations of the first low-level-bridge. It is possible to follow the initial railbed from where it branched off and comes down, crossing the spruit and making its way under the bridge and up the other side. The picture below shows the situation very clearly.

The bridge under construction - photo supplied by Nico Moolman.jpg 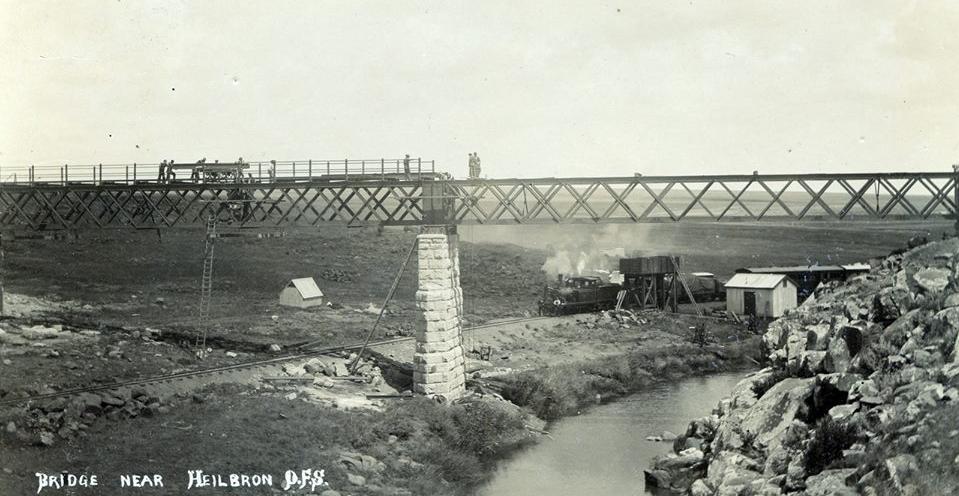 The bridge under construction (photo supplied by Nico Moolman) 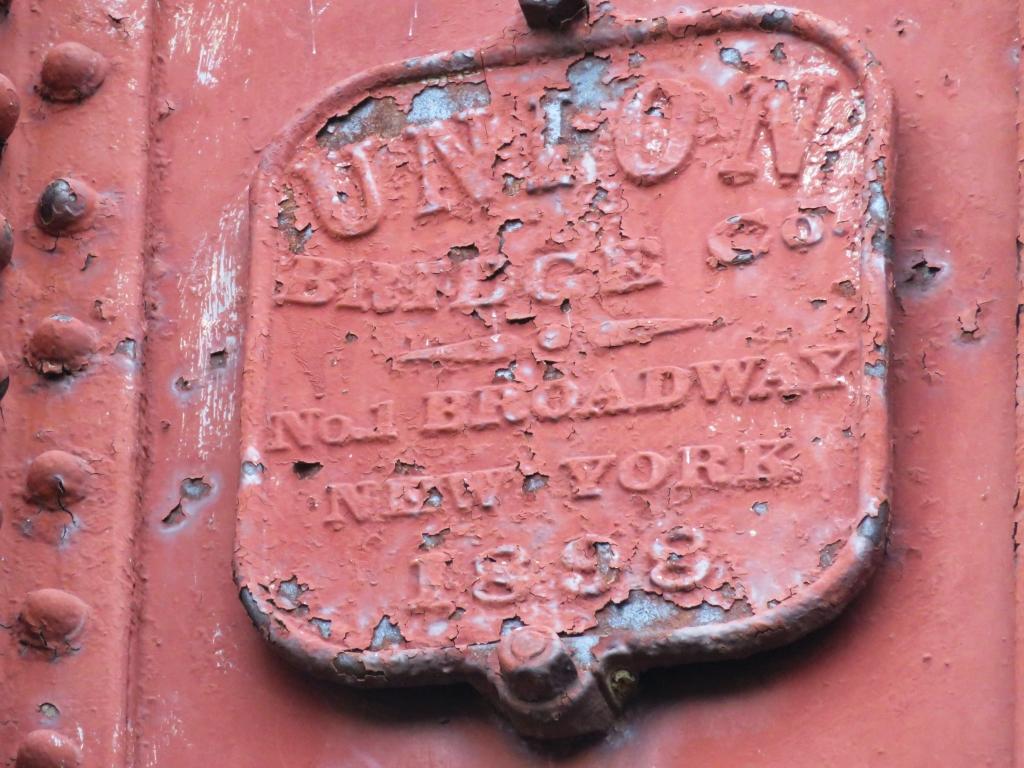 The steelwork for the bridge was also supplied by the Union Bridge Co., the nameplate is still in position. (Horst Müller)

Just past that bridge is the last siding before Heilbron, it's called Weilbach. Called so after the owner of the farm at the time, JF Weilbach. A well known personality in the area, he has been mentioned on The Heritage Portal before as the one who had the Weilbach farm house constructed (click here to read).

Further down the line we find two bridges constructed from Sandstone, one of them a two arch bridge. 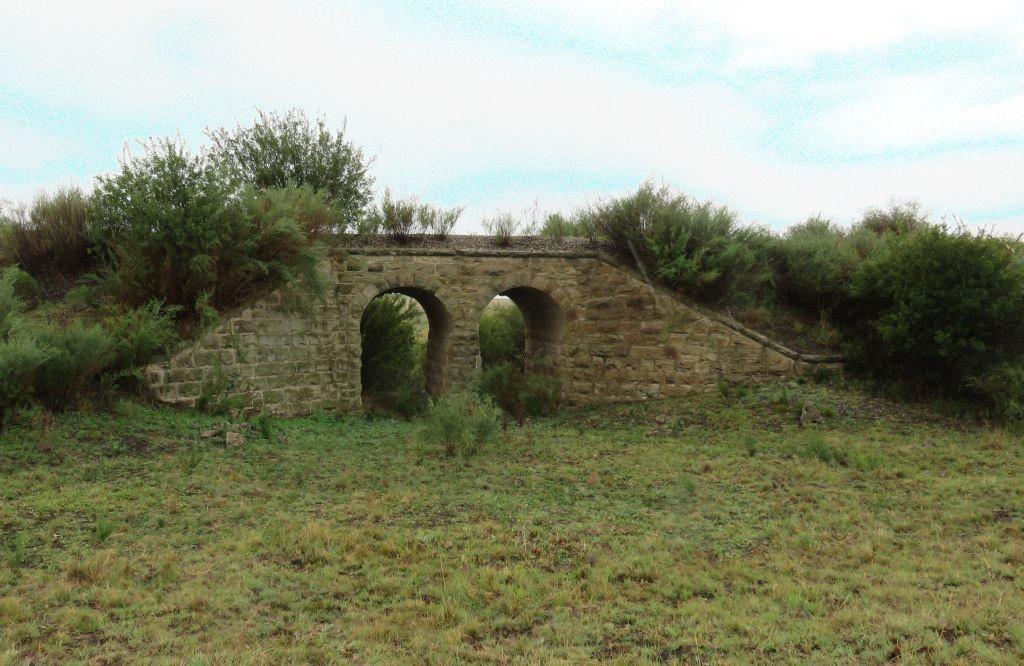 And eventually we arrive at the station of Heilbron. The station is still active, but very minimal. There are no station personnel, trains coming in have to organise themselves.

Heilbron Station at the time of the opening in 1899 - source unknown.jpg 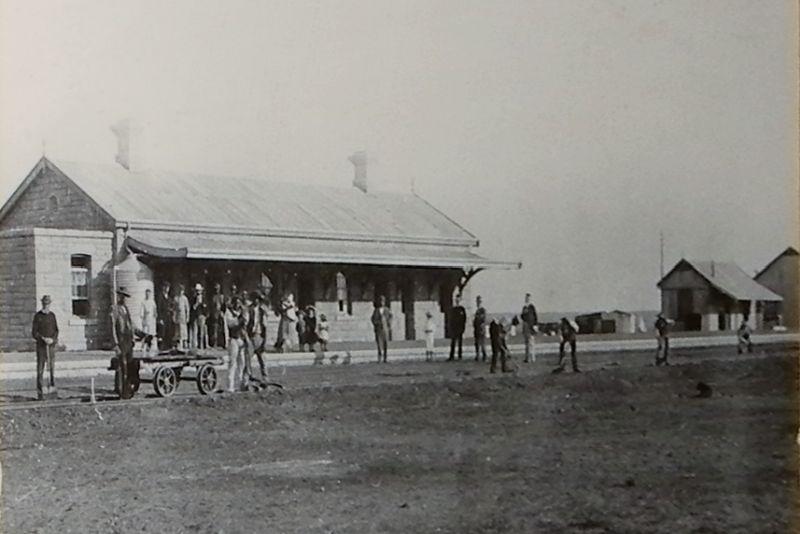 Heilbron Station at the time of the opening in 1899. 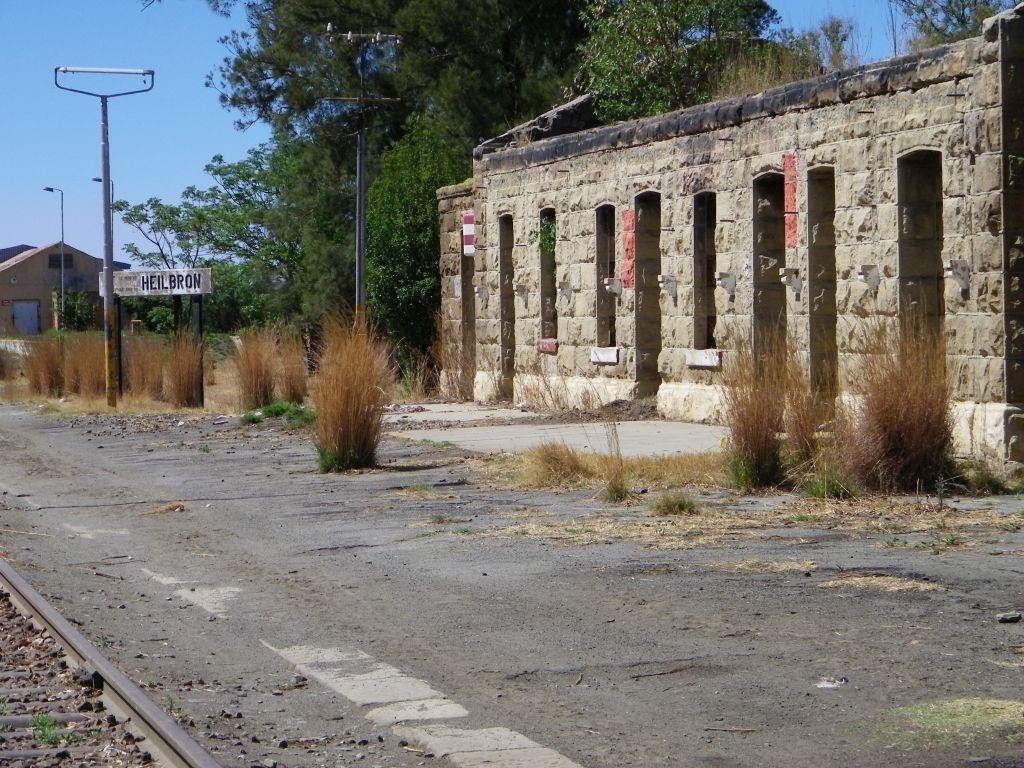 More infrastructure to the back of the station is witness to more active times in the past. There is still the goods shed and some platform for goods handling or for servicing the locomotives. It's totally overgrown and protected by a sign that states that no unauthorised persons are allowed on these premises.

Thank you to Piet Lombard for showing me certain places and being a companion and to Wouter Weilbach for allowing access to the big bridge.