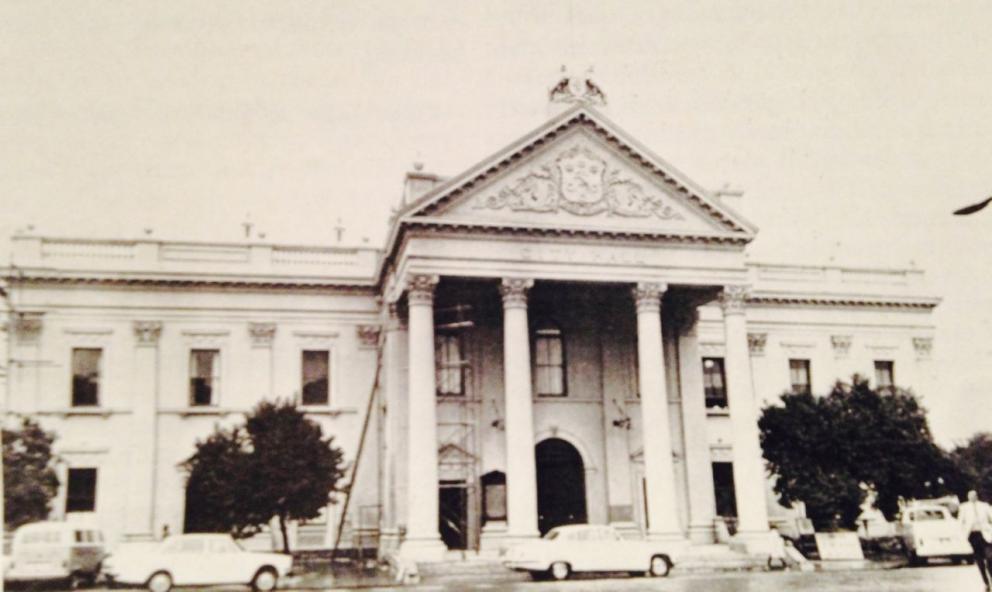 The Kimberley City Hall is one of the city's major attractions and a declared heritage site. It may be hard for current visitors to imagine a time when the future of the building was in doubt. Below is an article describing heroic efforts to save the landmark building in the mid 1970s. It was published in Restorica, the journal of the Simon van Der Stel Foundation (today the Heritage Association of South Africa). Thank you to the University of Pretoria (copyright holders) for giving us permission to publish.

Like old soldiers, it seems, old buildings don’t die, they just fade away. But unlike old soldiers buildings can be restored to their former glory. Just such an example is Kimberley’s City Hall. Since the completion of new municipal offices in the city, the old hall had been unused and uncared for, its shell crumbling and cracking. This is the story of the saving of this historic structure by the use of complex drilling and pinning techniques.

A campaign was mounted to save the building and, when restored, to have it declared a national monument. But structural damage was severe and the materials dry and powdery. Using a dry diamond drilling technique and a method of pinning common in mining, the structural damage has been halted and the remainder of the renovation programme can be completed.

Kimberley began in 1871 with the discovery of the first diamond on Colesburg Kopjie which eventually become the Big Hole. A tented town mushroomed around the deposits, at one time housing almost two hundred thousand people. Unlike many ‘rushes’, the Kimberley diamond mines didn’t run out and today the town is still alive with a population of about 125 000 people.

When a large number of people gather together a certain amount of organisation naturally occurs. In Kimberley’s case, it began with the formation of the Diggers’ Committees which grew into the Town Council. Naturally the Town Council must have a building in which to hold meetings and house the staff. So it was in Kimberley but the first town hall did not last very long. A fire in 1898 destroyed most of the building and the twenty years of records in it.

However, it did not take long for a decision to be made to build a new Town Hall and designs were called for, a prize of £100 being offered for the design selected. The design chosen was by a Mr F Carlstairs Rodgers, a Kimberley architect. On Wednesday 16th November 1898 His Worship the Mayor, Mr Moses Cornwall JP, laid the foundation stone and the building was completed only 10 months later. 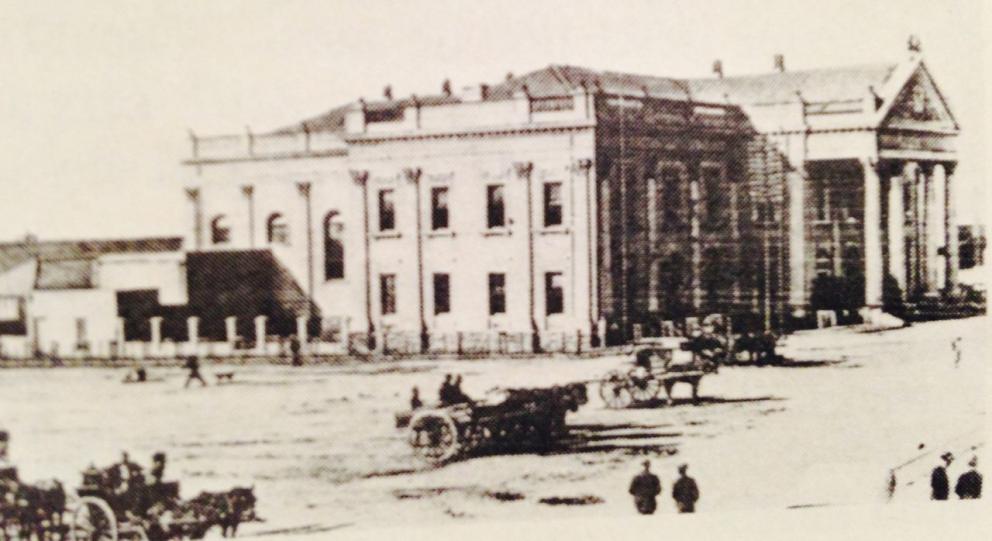 Until about five years ago the building was in daily use, becoming a City Hall when Kimberley achieved that status in 1913. As the city grew the functions of the municipality became more complex, requiring more and more staff, until a new complex of buildings was necessary. Since then the building has been unused and virtually unattended.

It was eventually decided that the building should be renovated and given to the nation as a national monument. The renovation is now well under way but whether the Monuments Council will accept the building depends on meetings yet. [A Provincial Heritage Site today]

The major problem was the outside structure. Built of locally made bricks and mortar, the building had suffered over the years from the extremes of temperature found in Kimberley and the general weathering of the materials. The facade above the Corinthian columned entrance, was threatening to fall into the main street and the back left hand corner into the market.

It looked an easy job at first sight. Just drill some holes in the facade and put in the rods to hold in the front and strap the corner to prevent the crack spreading. This would have worked for most buildings. Here it would have aggravated the situation. The bricks are old and crumbling, and in places the mortar can be pulled out by a finger. Conventional techniques for drilling therefore could not be used. The vibration from a percussion drill would probably have caused the building to fall down and the water from a diamond drill would have washed the mortar from between the bricks with the same result.

Kimberley is still an active mining town and miners are constantly using their ingenuity to devise ways of holding up roofs and walls of tunnels and some very sophisticated techniques have been developed. Engineers of De Beers Consolidated Mines were therefore consulted and they suggested that if holes could be drilled length ways through the walls to beyond the crack, steel rods could be inserted and grouted into position with a fast setting resin such as is used in the mines to brace tunnel roofs. But how to drill the holes - that was the question.

Obviously it had to be with diamond drills to minimise the vibration, give accurated holes over lengths up to 4,5m and clean holes to minimise the amount of work to make good after drilling. The De Beers mines have a very close relationship with the Diamond Research Laboratory in Johannesburg where intensive research has been carried out into most kinds of drilling. The contract was made and the problem presented. But even the engineers at the DRL had not tried this kind of drilling, especially over distances of 4,5m and accurate to within 4 deg. However they had a few ideas and all they could do was try them.

A team comprising one miner and two engineers from the DRL was formed. The mine would supply compressed air to operate the drill, give high pressure air to be used to cool the drill and remove debris formed in drilling, so that water need not be used. The DRL would supply the diamond drill, bits and rods. Scaffolding was erected and the job begun.

The facade was the first to be tackled since the holes were short and directly through the wall. Tie rods were then to be fitted and the facade braced back to the main beams. At first a surface set drill bit was used on the assumption that the particles would be coarse and the larger size of diamonds would give more clearance to remove the dust. But this bit was subject to constant core jamming which prevented progress of the bit and caused a considerable amount of overheating. The heat generated was sufficient to cause the diamonds to start to carbonise and the metal matrix to blue.

A thin wall bit impregnated with 18/20 US mesh De Beers EMB-S natural diamond, was fitted and cutting rates improved considerably and the overheating problem was alleviated. In all, eight holes were drilled through the 0,5m thick wall, each taking about half an hour including the time taken to move the machinery. The drill used for these was a low powered, air-driven, mine drill.

This part of the exercise was extremely useful in that it was possible to determine the power that would be required to drill the long holes at the back of the building and the best type of bit to use. The low powered mining drill supplies by the mine could not be used and the DRL engineers therefore brought from the laboratory a 10 hp pneumatic drill which turned the bit at 200 revolutions per minute. It was also decided that the air to the bit could be increased if a core breaker were fitted. This would not only prevent jamming but reduce the need to pull the rods.

From here on, the drilling was very fast, accurate and almost vibration free. Twenty-three holes were drilled to beyond the crack, these varying in length from 3,2m to 4,5m at an average speed of an hour per hole including the time taken to resite the drill. Eight 2m long holes were then drilled in the back of the wall at 90 deg to the long holes to provide extra support. This particular rig was secured to the scaffolding and the drill rods were inserted through the machine since drawing of the rods was not necessary. But the drilling was not without problems. Loose bricks in the middle of the wall sometimes dropped into a cavity, blocking the drilled hole, necessitating redrilling until the brick was completely broken away. At other times the building looked as if it was on fire, the high pressure air finding its way out of cracks and carrying dust with it.

When the holes were completed a crew from the mines took over to insert and secure the rods. The holes were blown out to remove the last of the debris and the rods inserted. The polyester resin was mixed and pumping began. This operation had to be done very quickly since the resin hardens to a gelled condition in forty minutes.

Only time will tell if the operation has been a success but hopefully the combination of diamond drilling, steel rods and fast setting resin will prevent further damage being suffered by this historic building.