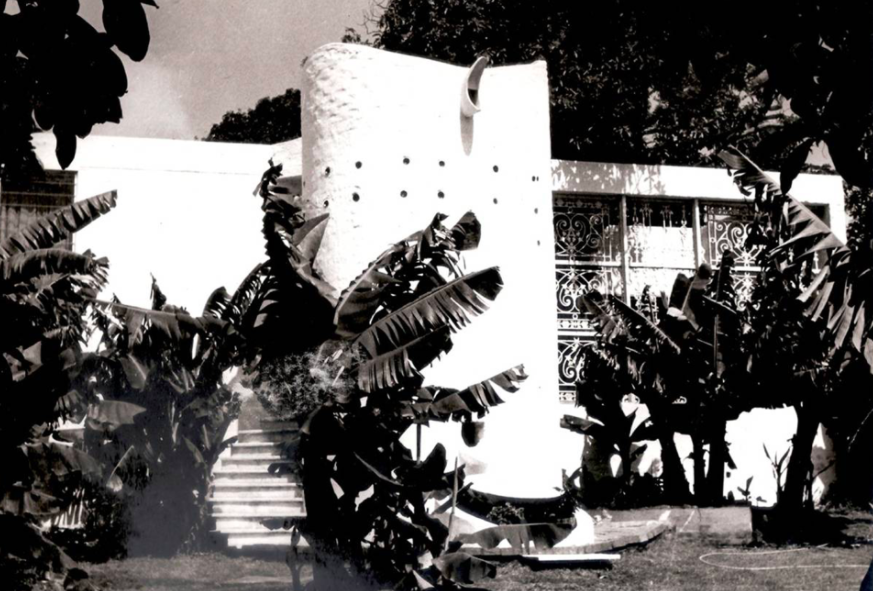 The SAIA - KZN Regional Heritage Committee in Durban has raised alarm about the Barrie Biermann House currently under threat of demolition. Robert Brusse (in the chair), together with Rodney Harber, Trish Emmett, Lindsay Napier and Kirk White have launched a national appeal. The heritage community including architects everywhere wish to object to the demolition of this modernist Durban architectural gem.

The present campaign is initially focused on objecting to and convincing the Local Authority to veto the current application for consolidation of the two sites – Biermann’s and the neighboring site – and the rezoning of the consolidated property from Residential 900 to Institutional 2. The latter zoning will permit a broad range of other uses, but will also sanitize the current illegal (unregistered) use of the site for a medical practice and laboratory.

Once this application is 'terminated', the next step in the heritage recognition process will be to get the building provisionally declared. Most of the letters of objection submitted to date demonstrate the reasons for the preservation of the building and site.

Located on Glenwood Drive, Berea, House Biermann was the home of the architect Barrie Biermann, built with love, imagination and style. He forged a sense of the regional vernacular in the early 1960s, the house was started in 1961 and completed in 1962. There were two earlier structures on the site. Barrie Biermann adapted and redesigned the older property to create a unique and rather wonderful home. It is a property that misses the general protection of the National Heritage Resources Act by two years (it is 58 years old in 2020 and general protection kicks in at 60) hence an urgent KZN Provincial Heritage declaration is needed to protect this home. Barrie spent his career teaching architecture at the University of Natal and died in his home in 1991.

A disaster to South African architecture has just come to light. Illegal demolition has started on House Biermann in Glenwood Drive. Fortunately the damage so far is limited. The curvaceous boundary wall is history and is now a palisade fence for car park!

The new owners wish to redevelop the site as a medical centre. It is a piece of Durban heritage that needs to be saved and celebrated afresh.

There is an early mention of the Biermann house in an article in Lantern (September 1972) - Houses of the Sixties - Architect Designed homes in South Africa, 1960-1970 by Danie Theron. In the opinion of Theron it was a house that had a strong influence on local domestic architecture, especially on the work of architects such as Hans Hallen, Paul Mikula and Brian Lee. Biermann found and incorporated old building materials in his home. Economic necessity and a small budget made Biermann an early recycler. It all added up to “a romantic and personal statement with bagged walls, concrete roofs, discarded ironwork and shutters, undulating brick paving and exotic plants into a total unity of architectural experience”. Indoor and outdoor living spaces combined. Theron added, “It is an exuberant rediscovery of the decorative value of throw-away materials such as broken slabs of stone, bottles, asbestos, cast iron and timber fretwork.” 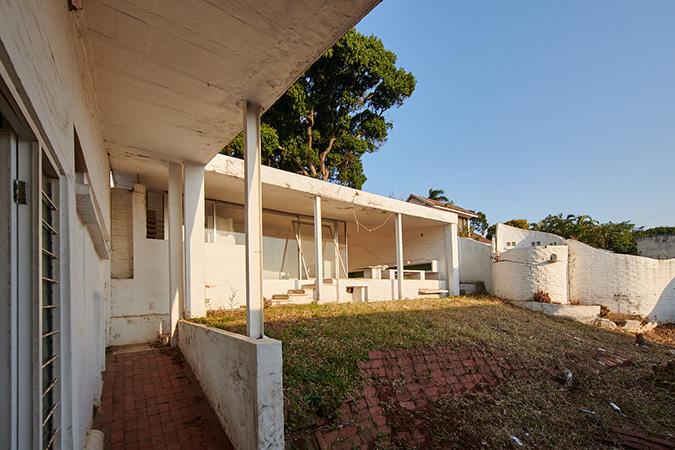 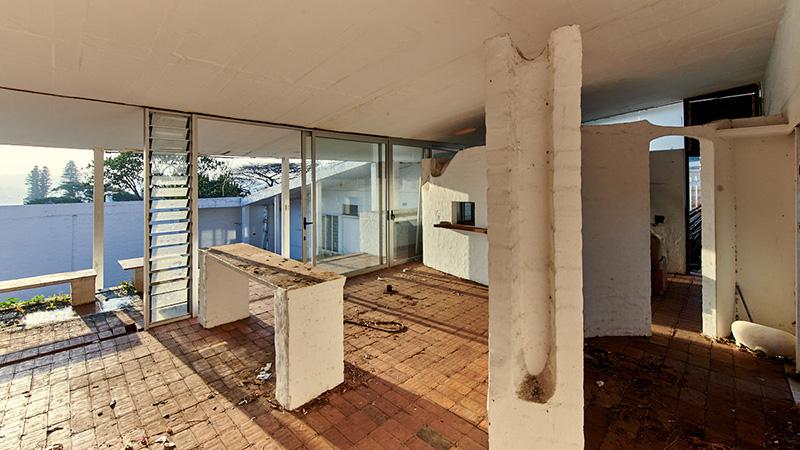 The Biermann House also reflected South American architectural influences as Biermann had spent time in Brazil as a young architect. In 1969 Biermann was in partnership with Danie Theron but this does not appear to have lasted long and Biermann though educated in Cape Town settled in Durban, built his home in 1962, and taught at the University of Natal where he rose to the position of Associate Professor.

By the mid-1980s the Biermann house had achieved landmark status. Barrie Biermann wrote about his home in an article featured in the UIA, International Architect Magazine, Issue 8, on contemporary Southern Africa architecture, published in 1985 on the occasion of the South African conference. The article is a double page spread that addressed the challenge of marrying what Biermann called “old fashioned modern design, economic necessity and regional vernacular”.  He elaborated on planning, surfaces, space and mass, light, definition and materials.  This article can be found on the artefacts website (click here to view).

By the second decade of the 21st century, House Biermann had become a Durban icon and featured in the SPOT MY DURBAN exhibit at the UIA congress held in Durban in August 2014. It was described as:

One of the finest pieces of domestic architecture in Durban, it has influenced a generation of architects. The house has been rebuilt on two existing buildings on the site over a number of years by Barrie Biermann, a prominent academic who taught at the School of Architecture, UKZN (University of Kwa-Zulu Natal, formerly UND University of Natal Durban). Its exemplary design solution lies in its response to climate, sloped terrain, existing vegetation, through the grouping of the residence's wings around a series of open courtyards and essentially the main courtyard, the opening of most of the internal spaces to enclosed gardens. The succession of the internal spaces, horizontally and vertically and the spatial progression (succession) through them, the views through and from them were elegantly and subtly addressed and yet enforced by B Biermann whether one circulates in the complex from the top of the property on Glenwood Road down to the bottom end on Essex Road or vice versa, always offering new visual if not emotional facets of the genial implementation of a design that is reminiscent in its spatial progression to cloisters and monasteries of the likes of Santes Creus in Spain.”  (Poster for the 2014 exhibition).

Biermann’s book, Boukuns in Suid-Afrika published by A Balkema in 1955, was illustrated with his own drawings and has become a collectable classic. He integrated diverse strands of South African architecture - indigenous Zulu, British colonial, Cape Afrikaner and Indian temples. It is a short book and deserves to be better known, but written in Afrikaans it found only a limited market. It has been said “more than anyone else Biermann set the agenda for the study of building, particularly indigenous building, in South Africa”, and this was decades before transformed teaching agendas. That rare combination of architectural practice, reflection, teaching, building a dream house and influencing his students over four decades makes Biermann’s house particularly significant. 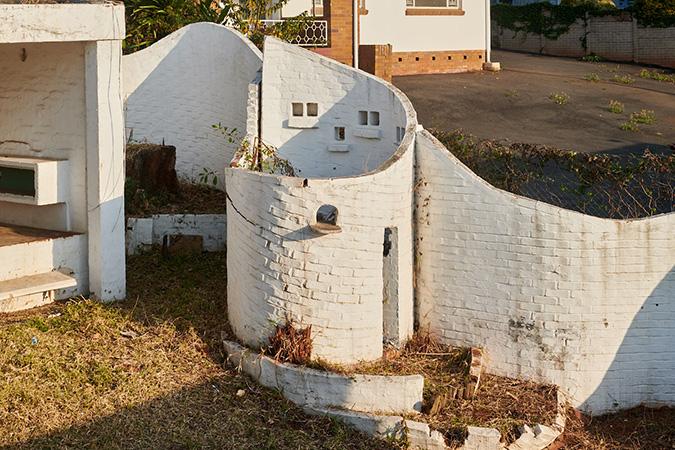 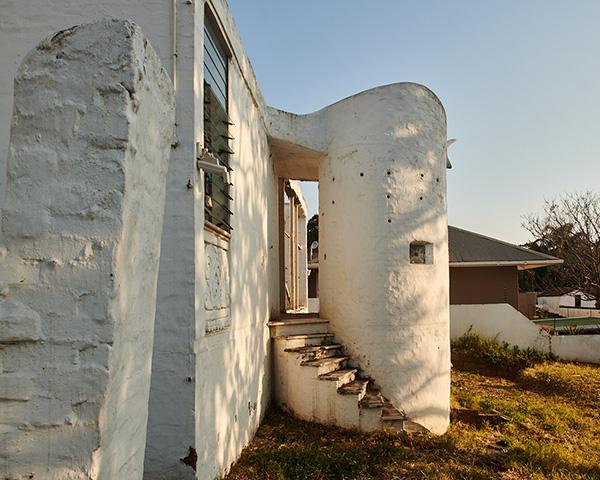 If you feel strongly about fighting to save important architecture and shouting out about a heritage building that though it has not yet hit the defined venerable age of 60 years to qualify for legal protection, should be recognized as ‘heritage”, we urge you to submit a personal viewpoint.