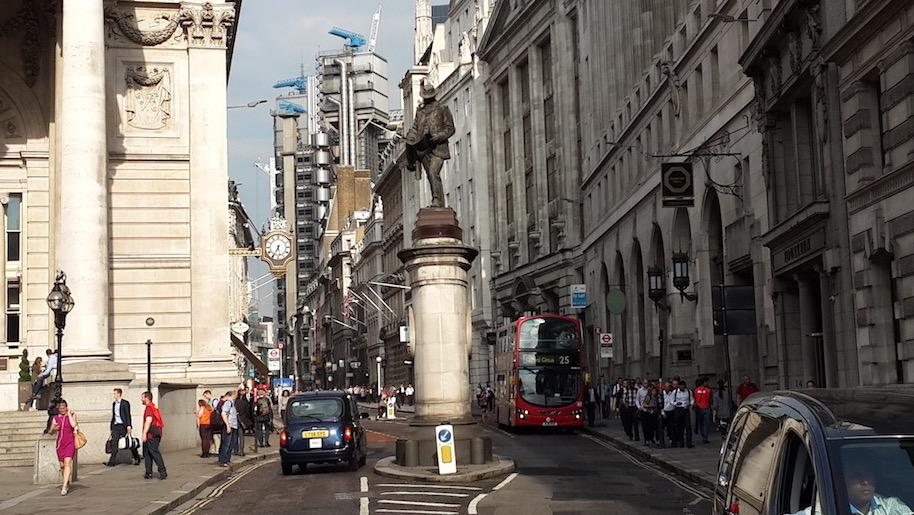 There are not many South Africans who have been honoured by having a statue of themselves erected in London. Only two come readily to mind and they are Jan Smuts and Nelson Mandela, whose statues stand proudly in Parliament Square, Westminster. However, there is a lesser known South African who has a statue which stands outside Bank Station; he is James Henry Greathead (1844-1896), the grandson of an 1820 Settler of the same name. So why is it that a boy from Grahamstown should be so honoured and what was his achievement? To answer this you have to go back in time 160 years to the London of Charles Dickens, when the metropolis was becoming overcrowded and the streets congested with traffic. 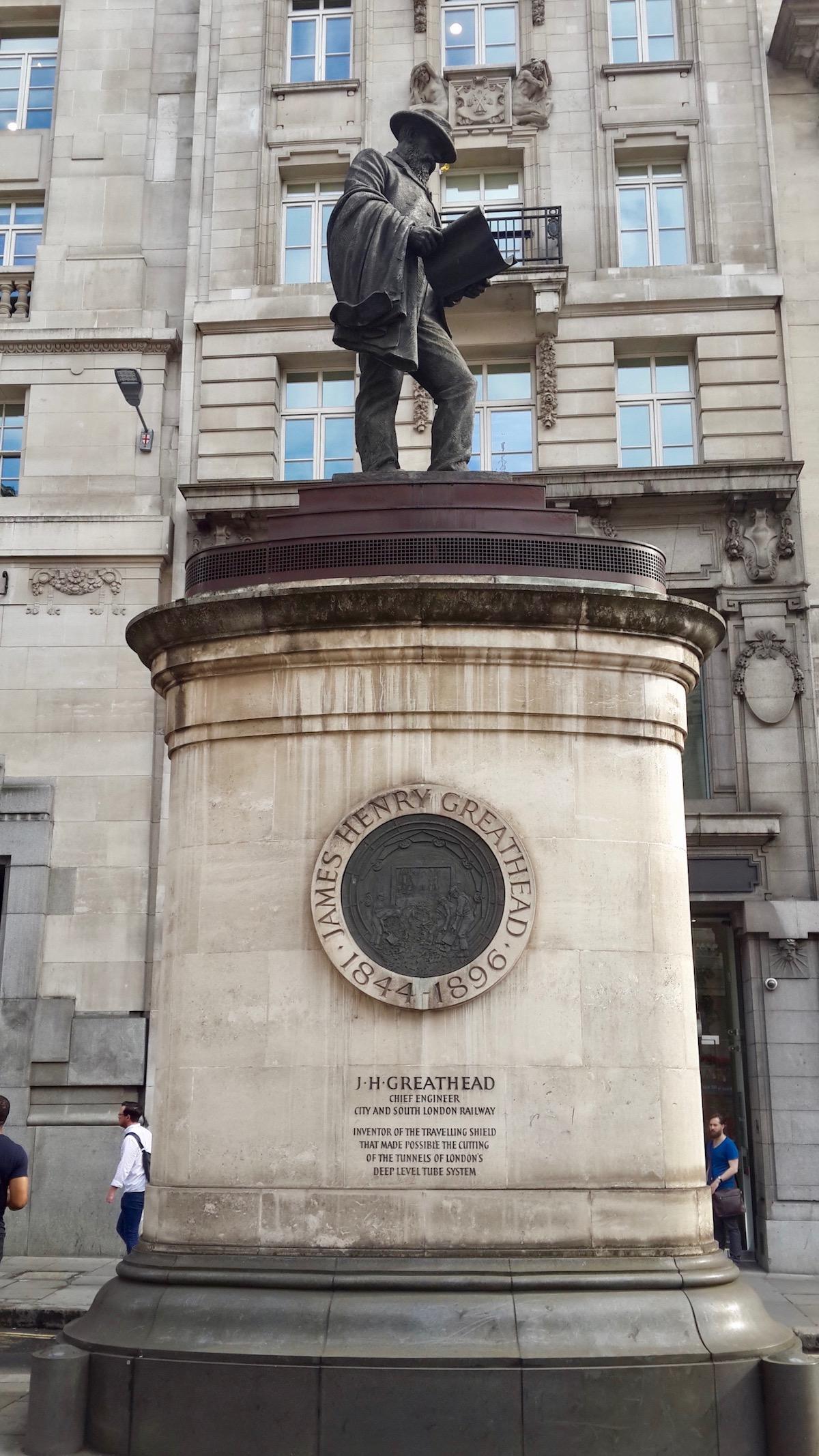 James Greathead had come to a bustling London in 1859, as a fifteen year old boy, and he enrolled at the Westbourne Collegiate School (then part of Kings College London), having already completed his South African schooling at St Andrews, Grahamstown. In 1864 he would embark on a career in Engineering, becoming a member of the Institute of Civil Engineers. He would work closely with the eminent engineering consultants and brothers Peter Barlow and William Barlow. Greathead’s great accomplishment would be the cutting edge technology of his day (literally). To find out more read on.

London was founded by the invading Romans in 43AD, at the then tidal limit of the River Thames. There is no archaeological evidence to suggest that a British settlement existed before that date and the River Thames was considered then to be the boundary between several British tribes. We do know, however, that in 60 AD, Londinium was burnt down by Queen Boudicca but the Romans were here to stay (until 410 AD that is) and they rebuilt it as a major trading centre, which it continues to be. With due apologies to New York, Paris and Rome, London has been arguably the most important, interesting and influential city in history, it being the cradle of modern democracy, the epicentre of the British Empire, the world’s financial hub and the first to have an underground railway; as Dr Johnson once said “If you are tired of London you are tired of life”. London’s phenomenal growth from the mid-eighteenth century created the urban giant of Victorian London, which by the 1840s, with the coming of the railways, was the largest city on Earth.

A City of London solicitor foresaw the impending crisis of streets becoming overcrowded with pedestrians, livestock, horse drawn buses, cabs, carts and carriages causing traffic jams (nothing changes). His name was Charles Pearson (1793-1862) and in 1845 he produced a pamphlet promoting his passion for a subterranean railway, along the valley of the River Fleet (going north-south) with its hub at Farringdon that would help lessen the traffic problem. His zeal would culminate in the opening of the “Metropolitan Railway” (the MET) two decades later, albeit not as he had first planned but certainly to his liking, as it would connect the existing main line railway termini north of the River Thames – Paddington, Euston and King’s Cross. 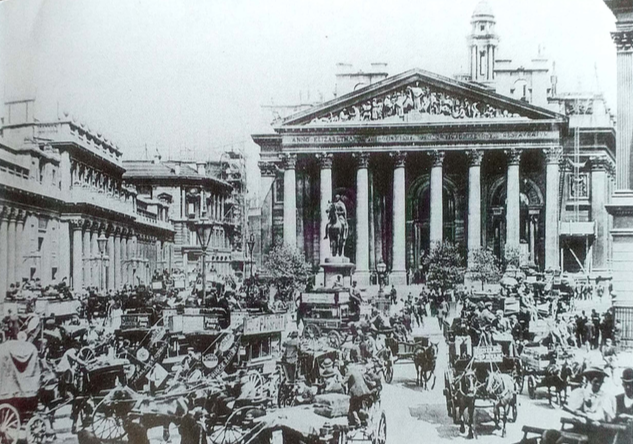 Congestion in London before the railway (National Railway Museum)

The MET would be the first underground railway in the world (opened 9th January 1863) and its route would follow the existing Marylebone and Euston Roads. In the course of construction these roads were dug up to form a wide trench (i.e. by the “cut and cover” method) which caused considerable disruption to road traffic. The building method once the trench was dug was to support the soil (outside) with brick retaining walls then roofing over with a brick barrel vault to form a tunnel and then restore the road surface above. The work would take nearly three years to complete, starting in February 1860 and finishing by the end of 1862. The immediate success of the “MET” (as a sub-surface railway) would bring about extensions both eastwards and westwards that would eventually lead to the completion of the “Inner Circle” by 1884; now known as the Circle Line (yellow on Tube Map).

Cut and cover along the Thames Embankment 1869 via LT Museum Guide 1980.jpg 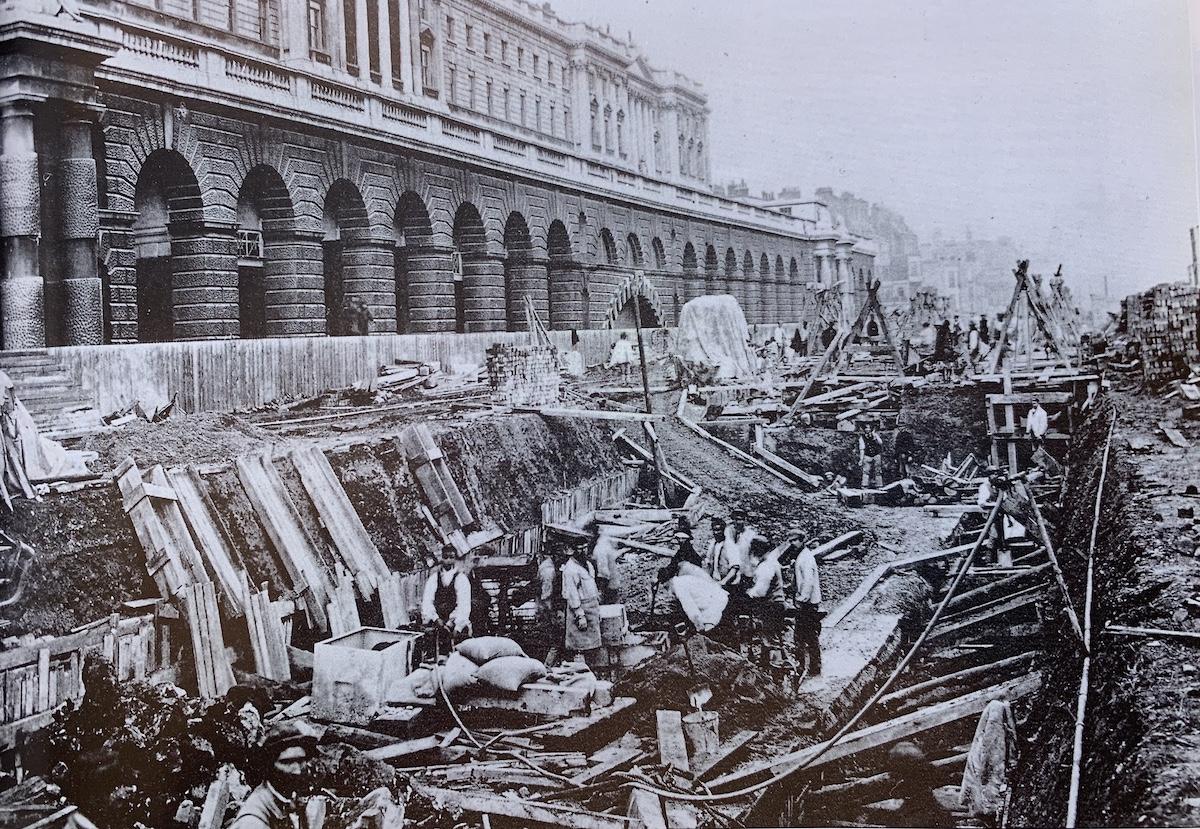 London Underground Map circa 1908 via The Subterranean Railway.jpg 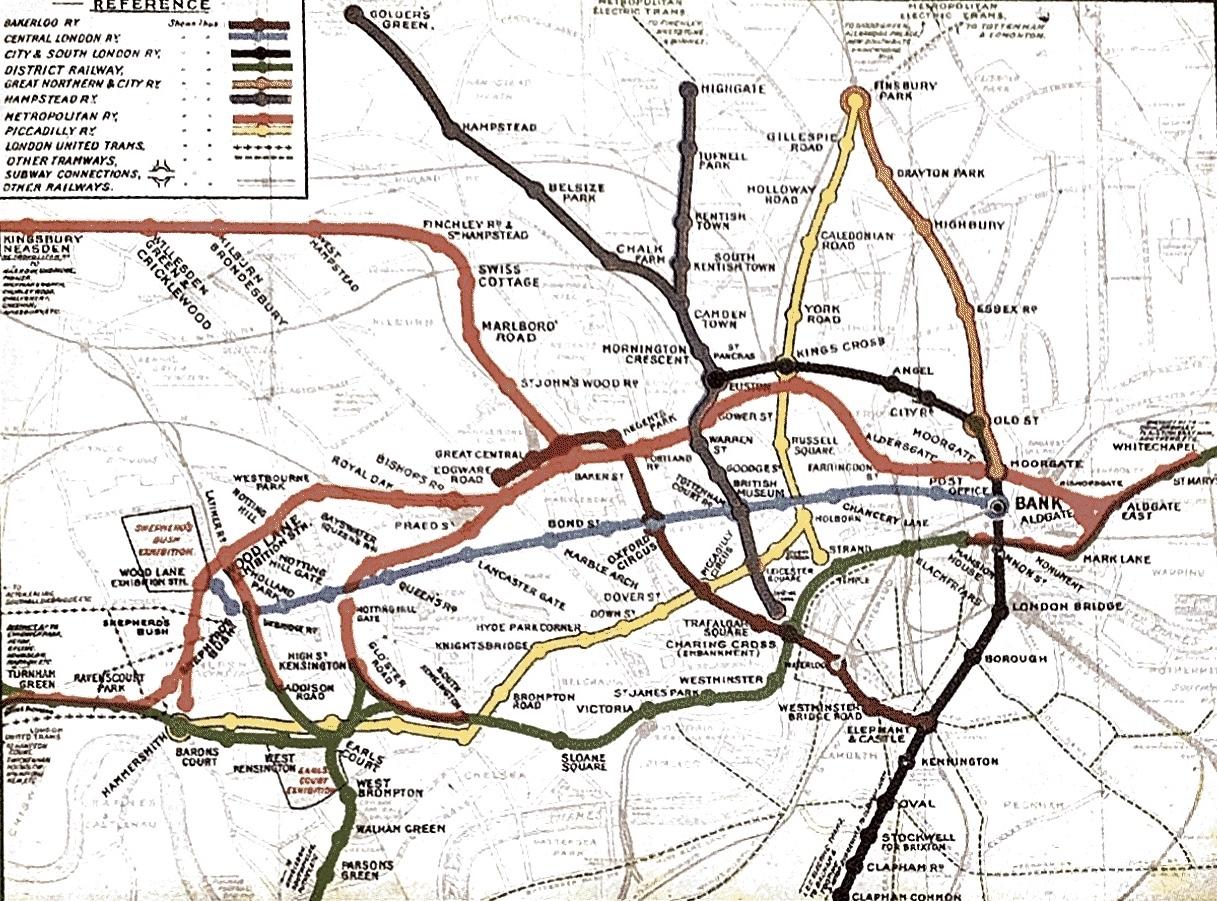 London Underground Map circa 1908 (via The Subterranean Railway)

The City of London Corporation opposed the plans of the main line railway companies (inter-city) to enter into the “Square Mile” and a Royal Commission on “Metropolis Railway Termini” of 1846 rejected the idea of overground railways going into one central station, as would become the case in German cities where they had a single “Hauptbahnhof”. Instead of one hub London would eventually have 15 terminal stations, which the “Inner Circle” was able to connect with, barring those stations on the South Bank – Waterloo and London Bridge. Interestingly enough this year, when the Elizabeth Line (Crossrail) opens fully, there will be a central station at Farringdon!

London’s transport demands were unrelenting and many further underground lines were proposed in the last quarter of the nineteenth century, note that not all proved to be feasible. The disruption to the city at street level caused by the “cut and cover” method could no longer be tolerated and the time had come for a new method of tunnelling to come to the fore. Engineering technology was moving forward at a pace and three new innovations would come together to make deep level railway tunnels a viable option; they were the electric motor, the elevator (lift) and the Greathead tunnelling shield. 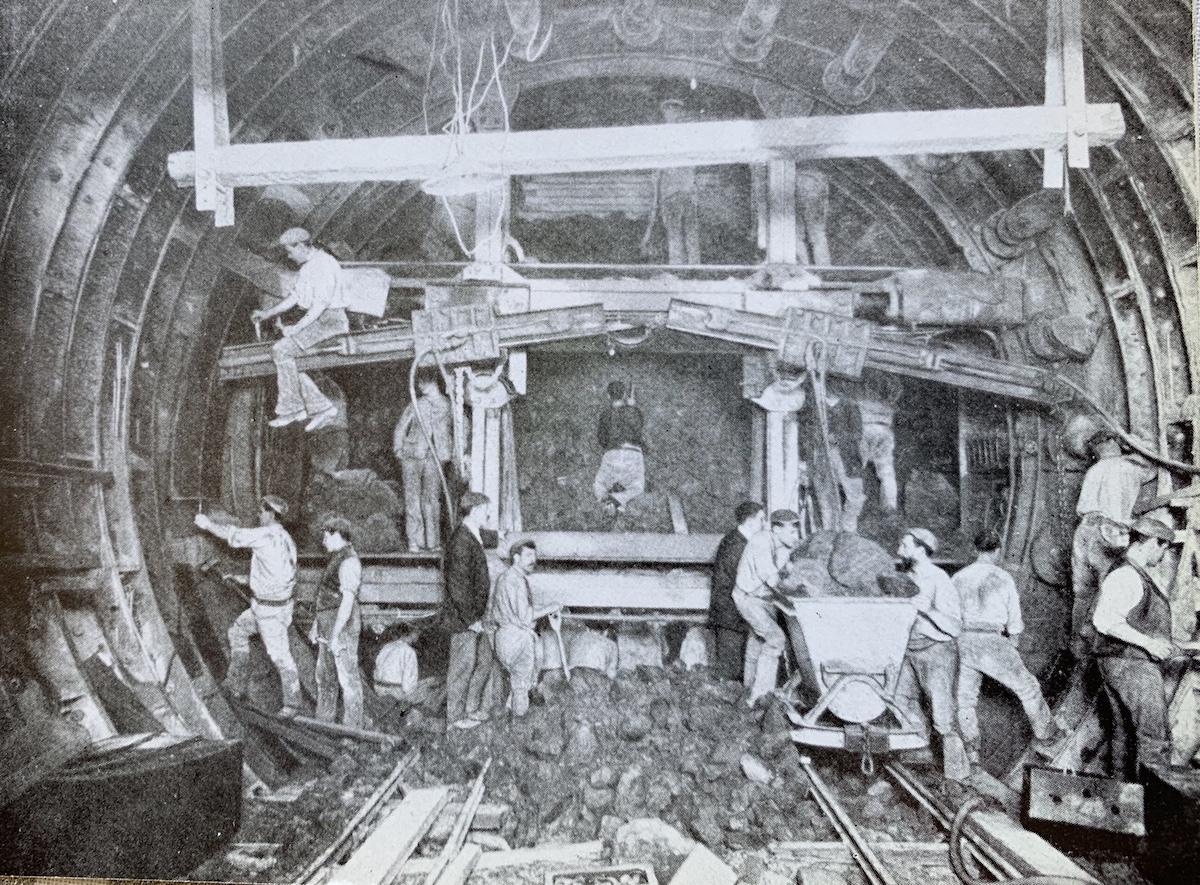 Now the Thames Basin, on which London is built, has sub-strata consisting of a thick layer of clay which proved to be soft and stable, thus ideal for tunnelling. James Greathead had been a pupil of Peter Barlow, the latter having patented a circular tunnelling shield in 1864 (patent No. GB 2207/1864), which was an improvement over Marc Brunel’s original brilliant idea for a tunnelling shield that was used for the Thames Tunnel between Wapping and Rotherhithe; the first tunnel under a body of water (built 1825-1843). Barlow and Greathead worked together on a second tunnel under the Thames to be known as the Tower Subway as it was close to the Tower of London which would open in 1870, prior to the construction of Tower Bridge (opened 30-06-1894). This tunnel with its modest diameter of 7 feet (2 134mm) was driven with the Barlow Shield and it would give the 26 year old James Greathead the experience he needed for what was to become his next challenge and his claim to fame. 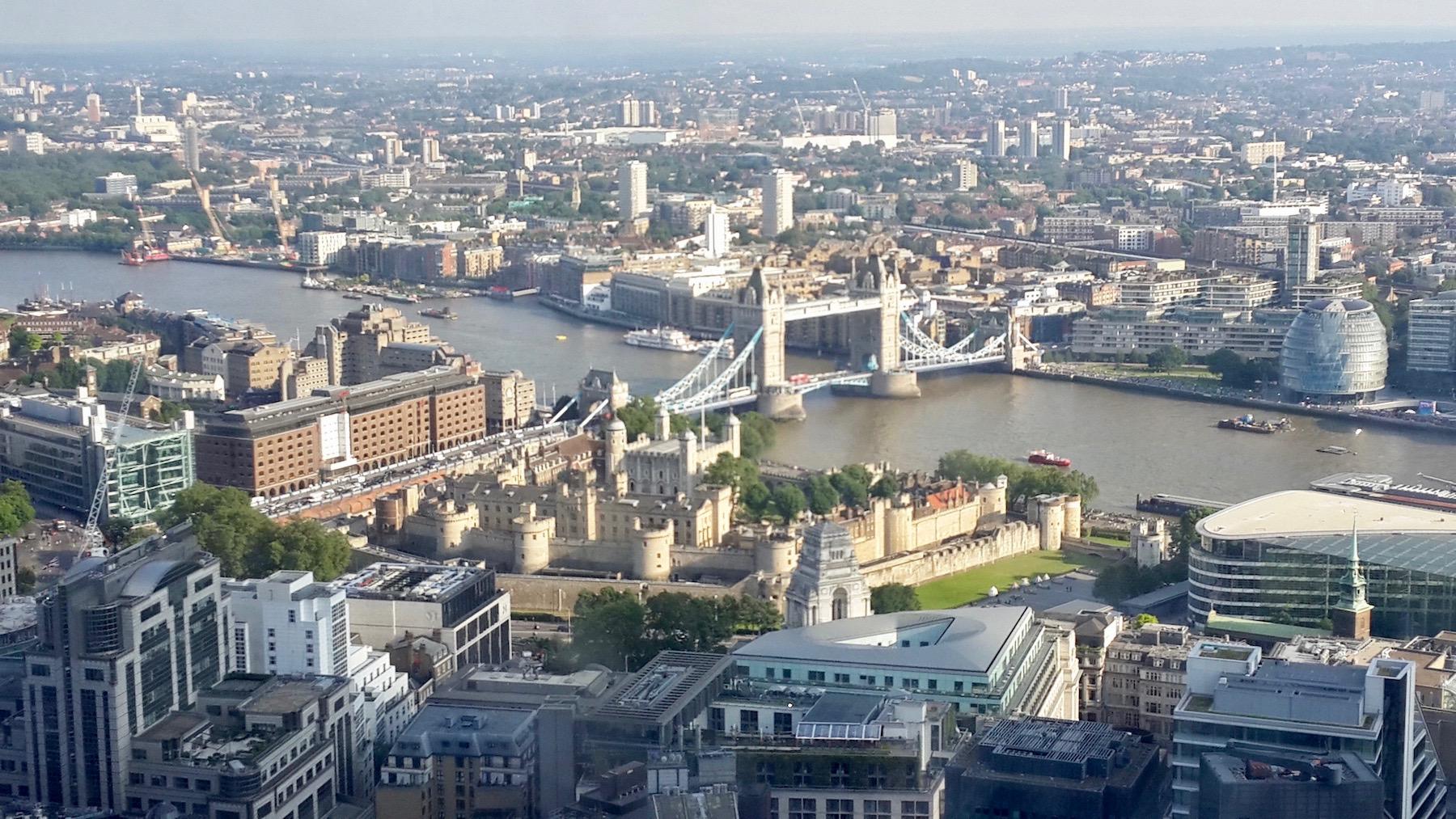 James Greathead had worked closely with Peter Barlow on the latter’s tunnelling shield patent and although he was in no way credited, it is thought that he played an important part in making the shield a practical proposition, thus with his expertise he was able to develop further the tunnelling shield and in 1874 he applied and was granted a patent (No. GB1738/1874) for his own version – the Greathead Shield; the forerunner of the modern Tunnel Boring Machine (TBM).

The deep level City and South London Railway was credited as being the first electric underground railway, when it was opened to the public on 18th December 1890. It ran between King William’s Street and Stockwell and is now an integral part of the Northern Line (black on the Tube Map). James Greathead was in charge of its construction and it was where his patented tunnelling shield was first used. Owing to its successful use it would become the standard for all future deep level tunnels driven under London up to the outbreak of the Second World War. He would be involved with the next two deep level railway tunnels, namely the Waterloo and City and the Central London Railway which would interchange along with the northern extension of the City and South London at Bank Station. James Greathead would not live to see the completion of those railways as he died on the 21st October 1896 aged only 52. 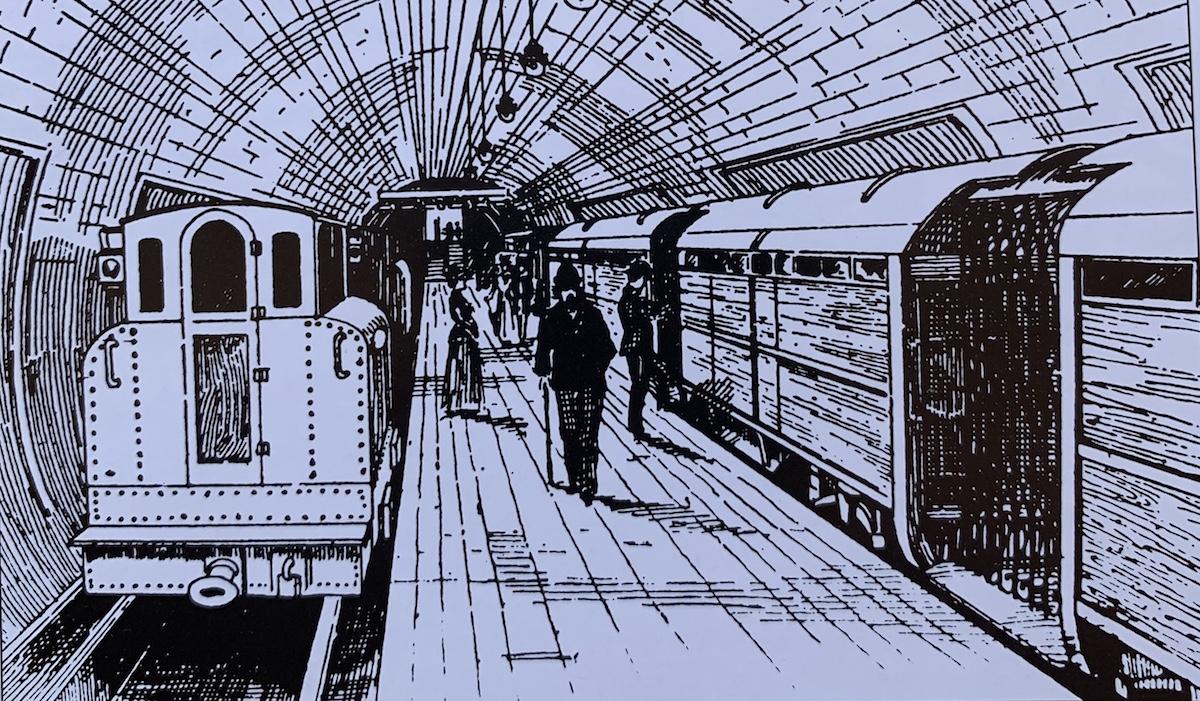 It is fitting therefore that a statue was erected in his honour on a plinth in Cornhill, outside of the Bank Station, but his recognition as the father of “The Tube” came nearly 100 years after he died, as his statue was unveiled as recently as 1994. The plinth on which his statue stands has a dual purpose as it also is part of the ventilation system to the station below ground. 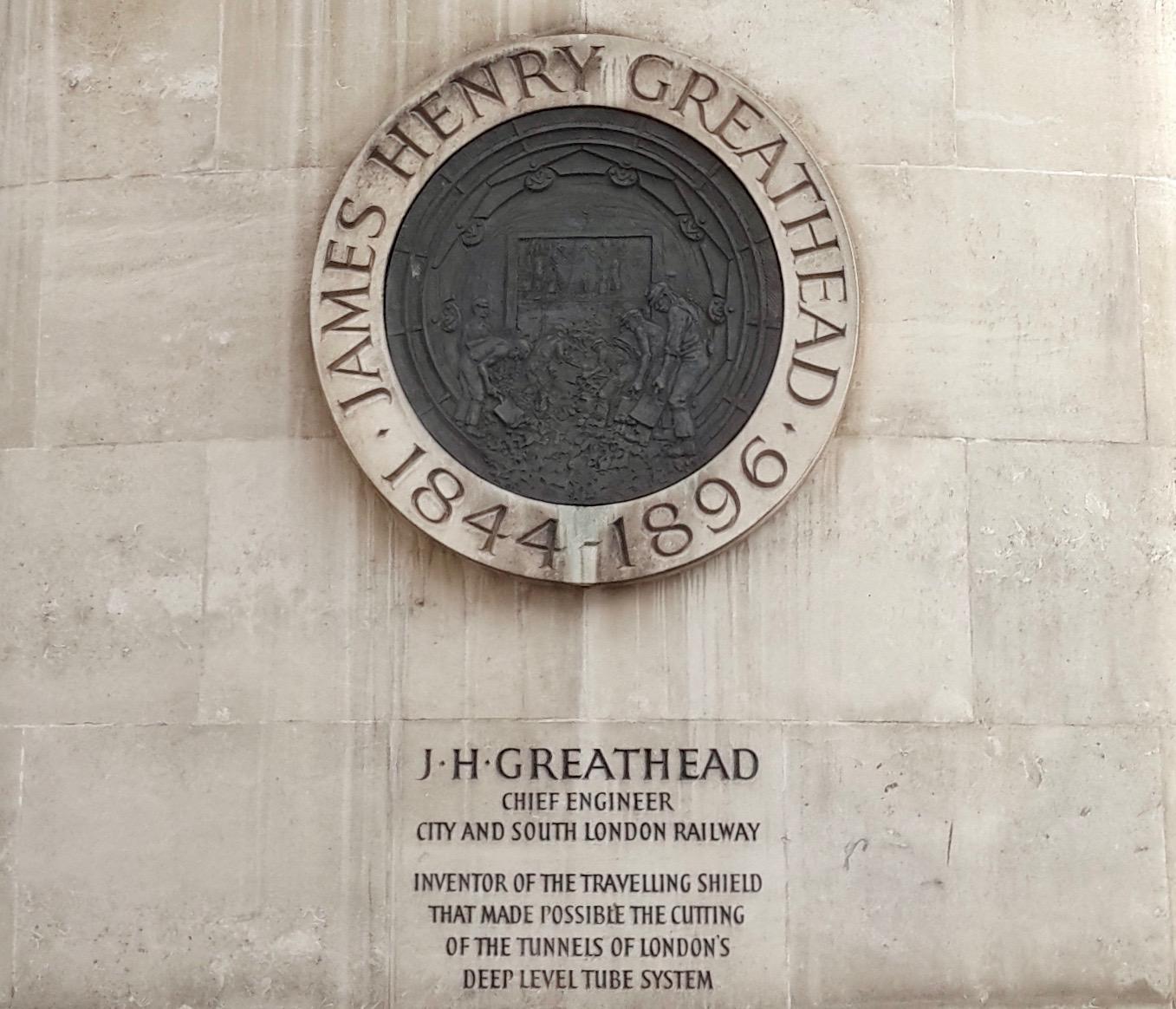 Inscription below the statue (The Heritage Portal)

Note: It was the writer’s intention not to “dig” too deeply into the technical aspects of the Greathead Shield as there is, for those interested, lots of information in that regard on the internet. Reference 8 below, is a “Youtube” video that explains everything (a picture says a thousand words) - click here to view.