Remembering the end of the tramcar era

In 1961, South African Panorama ran a special article bidding a sad farewell to tramcars in Johannesburg (the tram had dominated the transport scene for seven decades until the rise of the trolley-bus led to its demise). Below are a few excerpts and photographs from the wonderful piece. 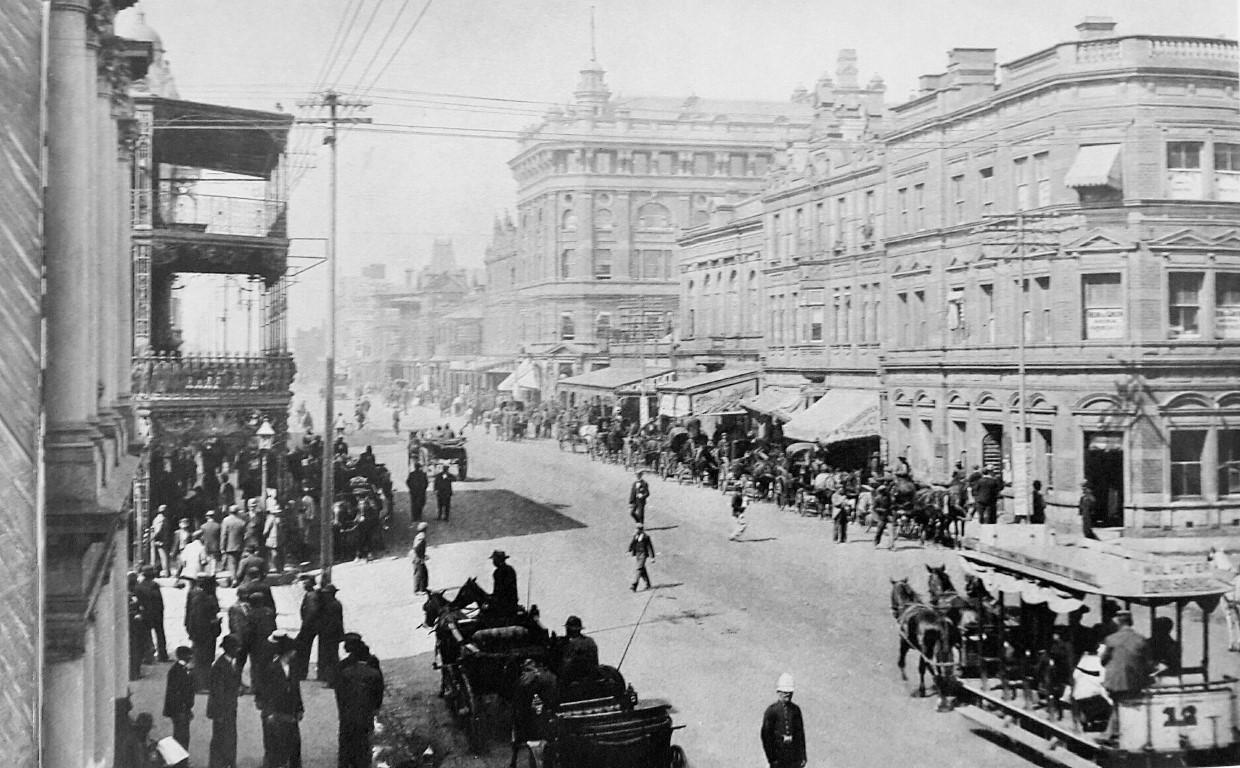 Tramcars have been part of the Johannesburg scene for 70 years - for almost as long, in fact, as there has been a Johannesburg. Now this colourful and somewhat noisy era in public transportation is coming to an end. The trackless, electrically-operated trolley-bus - silent and manoeuvrable in big-city road traffic - has come to stay. By the end of last year, "tram" routes which once criss-crossed Johannesburg had been reduced to four only, and any day now the last of the leviathans of the Johannesburg streets will clang to rest in the municipal sheds. 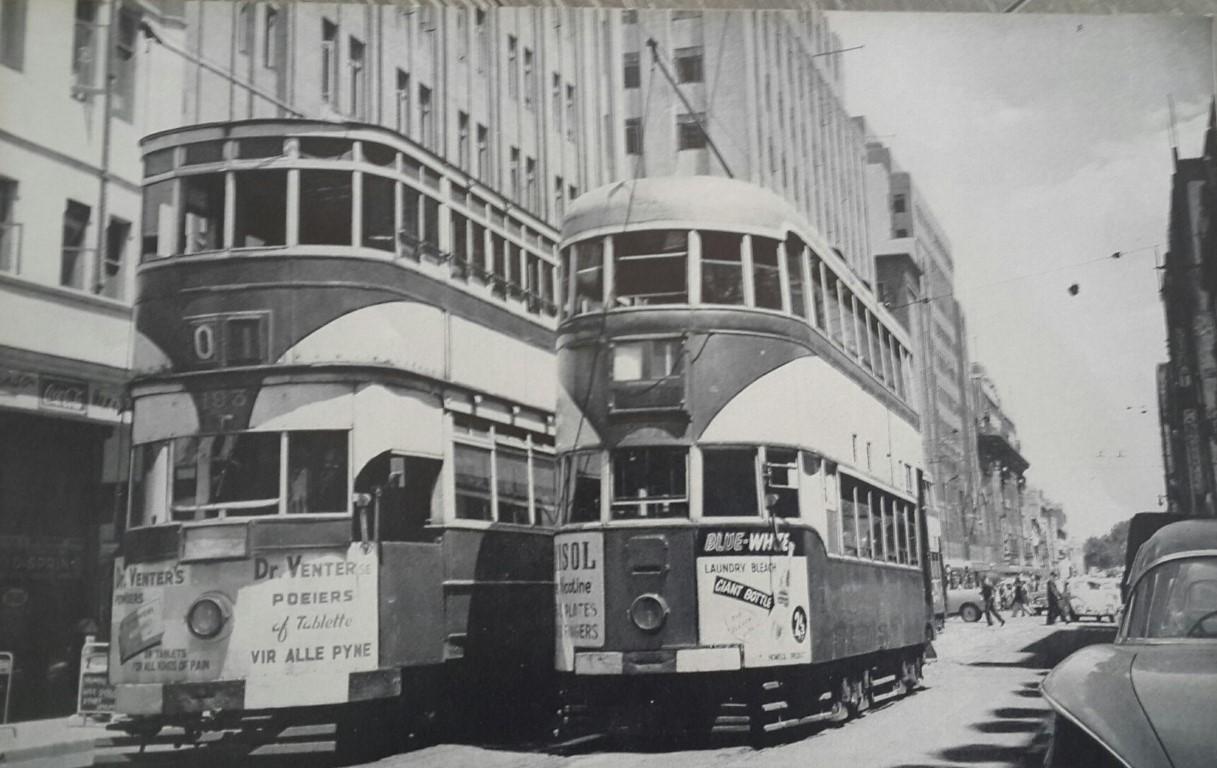 In retirement, tramcars are not without their uses. They can be bought for very little money and serve well as cubicles at resorts, roadside stalls, bungalows and children's playrooms - though they are banned by municipal building regulations within most city limits. Collectors' pieces from trams are in brisk demand not only in South Africa but also overseas. 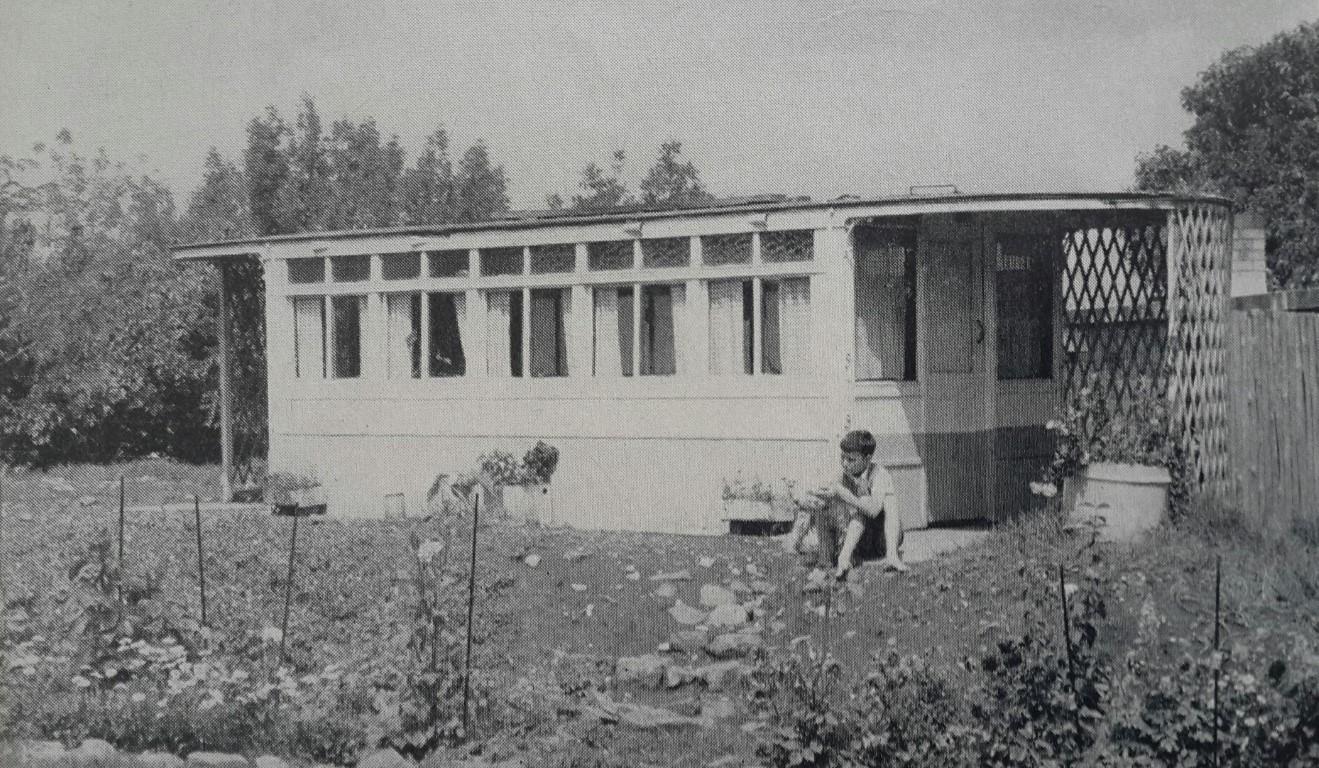 Trams have been part of Johannesburg since the days when the town was a small bustling mining camp, and there are still people living in the city who can recall riding in the old horse-drawn trams, the last of which were withdrawn on the 14th July 1906.

When old horse-drawn tram No. 8 was brought out of retirement in November 1960 in aid of charity, a dear old lady remarked that the display was not quite authentic: the tram should have been drawn by three horses. Also, the bell that used to hang over the driver was missing. 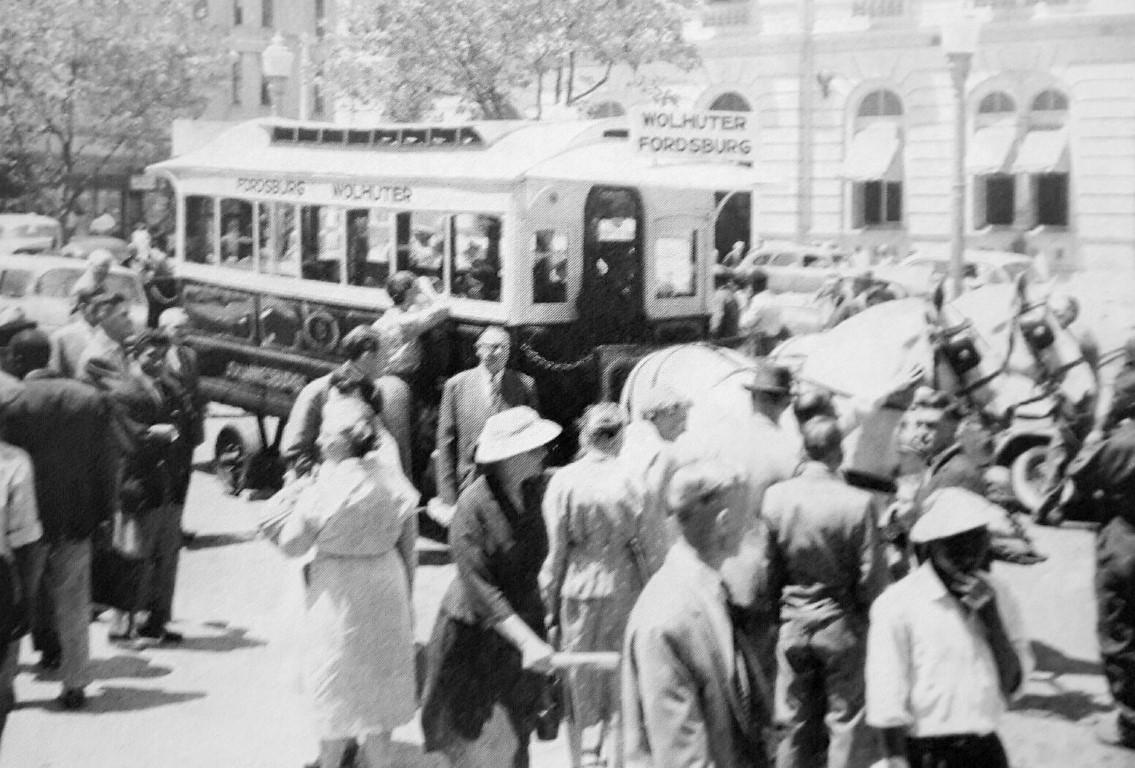 Shortly after the gold discoveries on the Witwatersrand in 1886, and the opening of the town of Johannesburg, the Transvaal Government granted a concession for the operation of trams in the streets. The Johannesburg and Suburban Tramway Co. Ltd was formed, and in 1891 it opened up its first four miles of horse Tramways.

The company was granted a 30-year concession to work tramways by animal power. Tramcars were imported from England and modified in Johannesburg. The open trams commonly called the "Toast Racks" were very nice in warm weather, but after a few severe storms there was a clamour for the closed in versions.

The trams at first had rubber-banded wheels, but later ran on tracks. They were drawn by two, three or six horses, and some of them comprised two coaches. Later double-deckers were introduced. 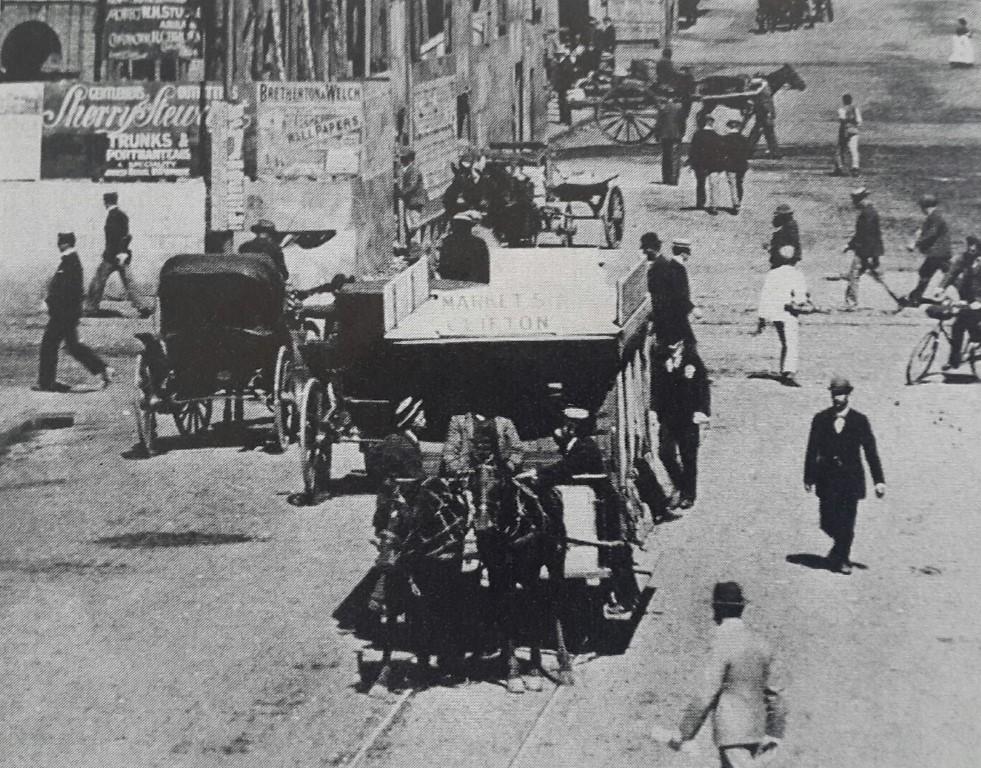 The earliest drivers were ex-British soldiers, rich in Cockney humour. They acted as conductors too, collecting fares from passengers before driving on. A bell which hung from the roof over the driver's head announced the arrival and departure of a tram. 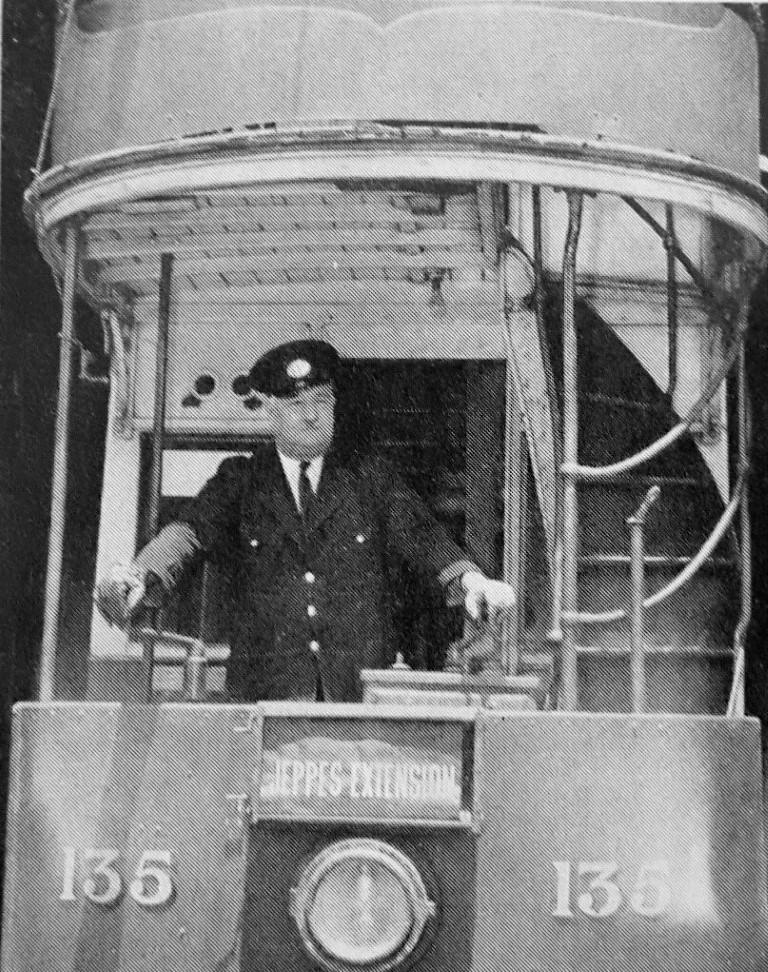 Successor to the horse-drawn trams was the electric single decker. The Council also operated freight cars for conveying stone, sand, track material and labour gangs. Five water sprinkler tram cars had come into use by 1906 to water the dusty streets of Johannesburg. Some other interesting historical features of the city's tramway operations were the installation of tram-car meters for measuring the amount of electricity used by each motor between the years 1910 and 1919; and there was a large punch-clock fixed on a pole at a major intersection so that tram conductors could punch their keys and provide tramway statisticians with some facts about the timekeeping of schedules. 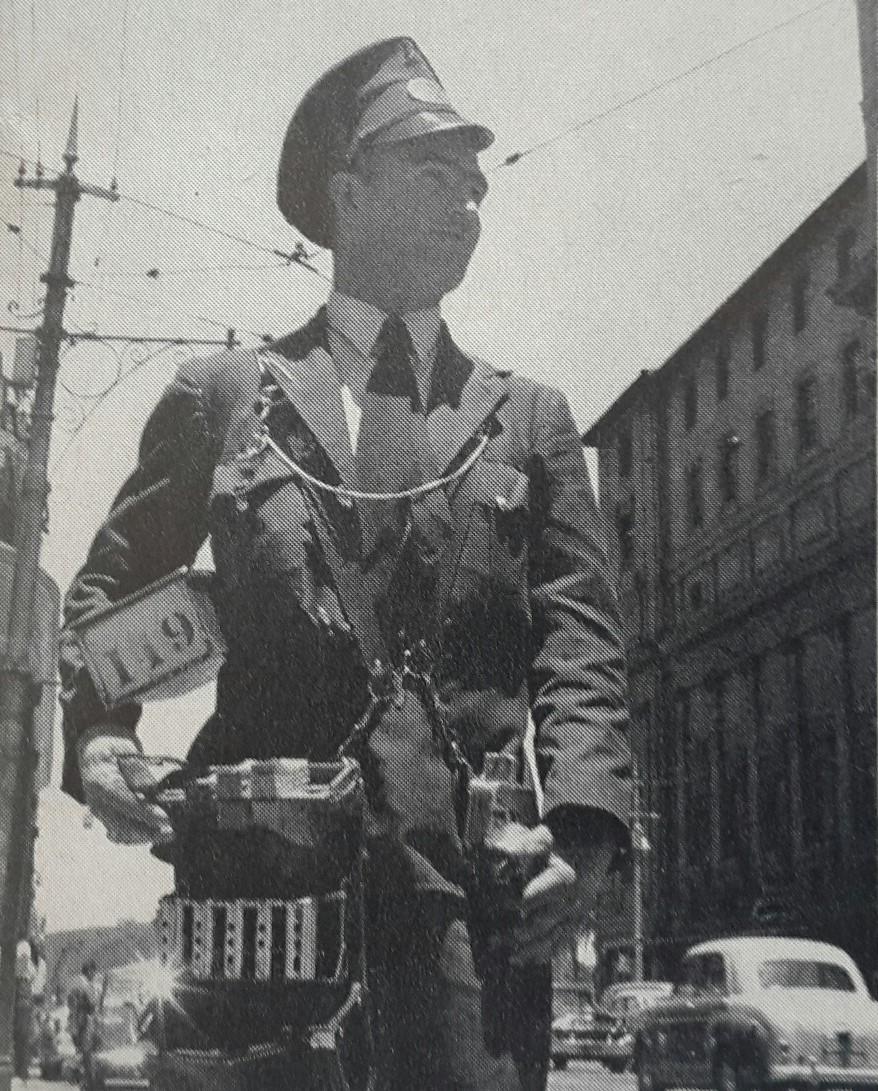 A familiar sight was the young boys operating at the points. Their slickness was amazing. They were proud when a tram did not have to stop but could run quickly through the points. After learning the points and other items of tram routine, they went on a 12-months training course before passing out as drivers and conductors. 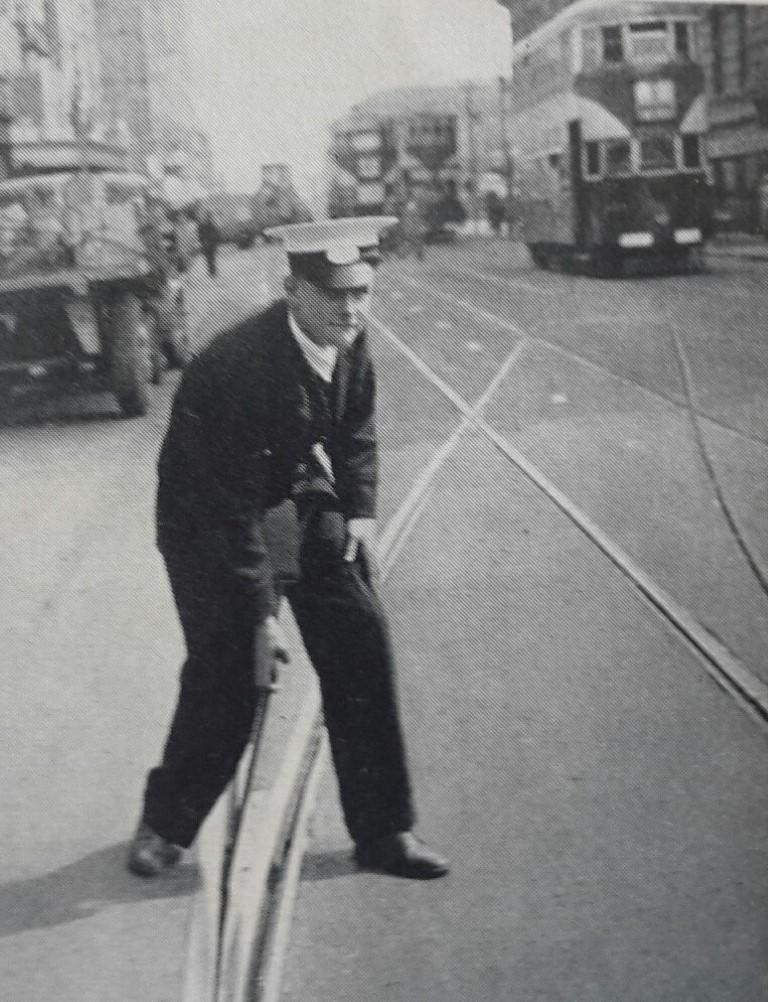 There is a slang vocabulary among Tramwaymen. Passengers are known as "clients"; an inspector is called a "shark"; and a driver and conductor are "mate" to each other. The old trams were called "brakes".

Wouldn't it be great to see the tram return to the streets of Johannesburg? Imagine a tourist route running down Main Street, around Newtown or through Maboneng. Perhaps even a short hop from the Rosebank Gautrain station to the various spots in the Parks?  Let's hope it happens one day!