Oblowitz's Bioscope and the Adelphi Cinema: Film in Hermanus: 1906-1981 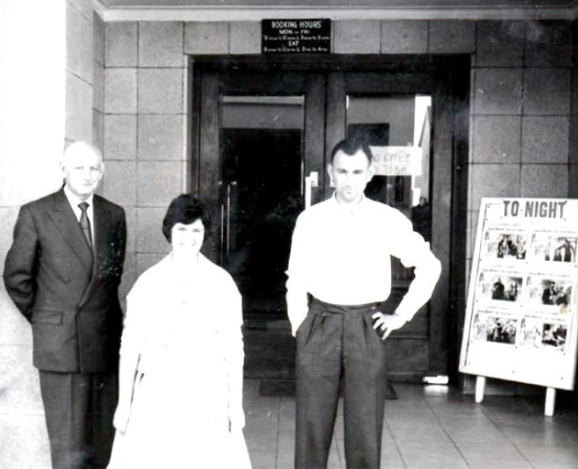 The Adelphi Cinema was built by the Allen family in 1916 and was owned and managed by Simon Allen, one of the sons of David Allen and a grandson of the original Allengensky. The first member of this family to come to South Africa was Adel Allengensky, who arrived in Hermanus from Latvia, via Cape Town and Greyton early in the 1890s.

However, the Adelphi was not the first ‘bioscope’ in Hermanus. In the early 1900s, Jacob Oblowitz owned and ran a general dealer store on the corner of Main and Harbour Roads, where the Fishermen’s Village now stands. Jacob Oblowitz was nothing if not entrepreneurial and at one time or another had five businesses running: his general dealership, a tea room, hardware and ironmongery outlet, a barber/hairdressers and a bioscope. 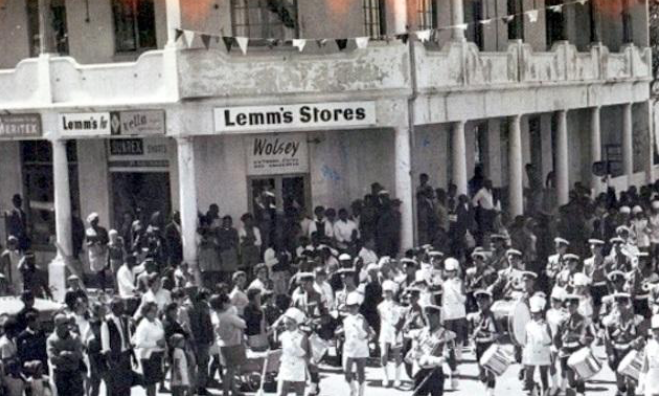 There is no record of the equipment he used in the bioscope, but the films were certainly silent. He operated the projector and screened the movie in a large room above the shop. He often stopped people passing in the street and encouraged them to come in to watch a film. However, on one occasion when Mr Luyt owner of the Marine Hotel asked for a haircut just before the film was due to start, Oblowitz ran upstairs and told the cinema audience that they would have to wait. There is more to this story which can be read about in a book published by the Hermanus History Society and titled “In Those Day: the story of Joey van Rhyn Luyt and the Marine Hotel”.

The Adelphi was a custom-built cinema with an art deco like design outside and, by all accounts, comfortable inside. Photographs exist of the exterior, but little was known about the interior until I asked Minette Minitzer for help. Minette is the daughter of Simon Allen and spent her earlier years in Hermanus. She has an impressive recall of the Adelphi and supplied me with the photograph of her family (see main image).

Booking seats in advance was possible. You did this at the cinema and once you had paid your reserved seats were marked off with a big blue cross on a seating plan. Families who spent every holiday in Hermanus were given especially reserved seats which they retained from year to year.

Once you had your ticket (reserved or not), you passed through the foyer (which was tiled in mustard colour tiles), up some stairs and into the interior. This was partly wood-panelled and probably painted above the panelling. The screen was behind maroon velvet curtains, and the upholstered seats were the same colour as the curtains. The curtains opened with a flourish to indicate the start of the show; a moment greeted with enthusiastic cries from the audience. The seats were arranged in rows, some with four seats in a row, while the others alternated six seats in one row with seven in the next to improve the line of sight for each patron. They were modern seats, fixed in place and with a bottom portion that tipped up. There were two aisles. 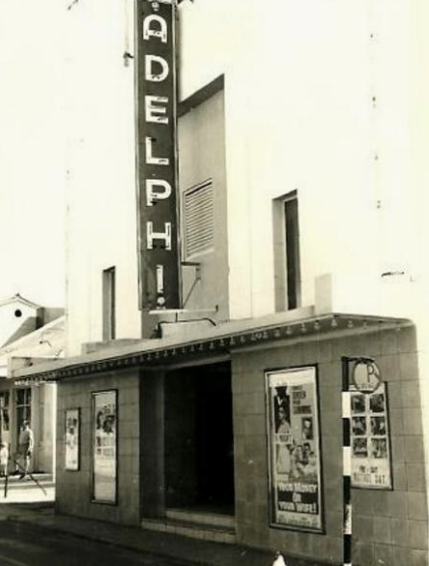 Usherettes were employed for every show. Patrons could not go to their seats unless shown by an usherette. “Poppie de Kock is the one I remember,” Minette writes. “She lived in one of the houses where Rossi’s is today. She single-handedly showed everyone to their seats, running up and down with her torch. No one was allowed inside without her showing them to their seats.”

The day’s entertainment came in two unequal halves. “Shorts” were first shown, usually a newsreel, a cartoon and another film, often a travelogue. Then it was ‘interval’ during which refreshments were sold in the foyer or by the usherette or people went to the nearest café for sustenance. The Adelphi was located where a travel agent now trades and adjacent to it was a fashionable meeting place, the Cafe Royal, belonging to Mr Coena Hamman. The Café was where the Hermanus Pharmacy now is. Patrons of the Adelphi usually went to this café.

As she did not herself smoke Minette cannot recall the practice of the time relating to this. However, members of the Hermanus History Society who frequented the Adelphi were unanimous in remembering that smoking was permitted. One comments that he clearly recalls ‘the clouds of smoke in the beam of the projector’.

Simon Allen introduced Cinemascope at the cinema in mid-1956. The first film shown in Cinemascope was “Jupiter’s Darling”, starring Esther Williams and Howard Keel. Set in ancient Rome, the story created space for Williams to show her swimming skills and Keel to sing.

In August 1958 politics caught up with the Adelphi at last. Up till then, there had been no formal segregation in the cinema, but in this month the Manager Mr Simon Allen was informed by the Department of Community Development that a permit had been granted for coloured and Indian patrons to attend shows, but that Natives could no longer be admitted to the cinema at any time. This was an end-point of a year of appeals, all of which were turned down.

In 1968 attendance by Coloured patrons was also stopped. However, the article in the Cape Times from which this information has also been gathered reported that a resident, Mr George Eastland immediately started film shows for ‘non-white’ audiences in the Moffatt Hall in Mount Pleasant.

Simon Allen drove to Cape Town once a month to choose the films for the month. This was no small task, as the programme changed every two days, meaning a minimum of 12 programmes. The films themselves were sent by rail to Bot River and then by railway bus to the Hermanus ‘station’ in Mitchell Street, now the Tourism Office. In a marvellous image, recalling a South Africa long gone, Minette writes: ‘(A) worker whose name was Dawid collected the reels at the bus station in a wheelbarrow which was kept in our back yard’.

Berdine Luyt records that troops on leave in Hermanus during World War II regularly visited the Adelphi, except on the night of 5 October 1945 when a massive storm caused power outages in the whole town, including the cinema. This was the same storm which caused the Onrus River to come down in flood and wash away the bridge between Hermanus and Onrus.

Everyone reading this article will be familiar with the long building behind Hermanus Property Sales, which is now occupied by Rossi’s Restaurant. The Allen family owned this building and divided into three ‘apartments’, rented out to three different families: the de Kok, van Dyk and Smalberger families. As Minette recalls, the daughter in the de Kock family worked as an usherette in the cinema. Mrs Gail Overmeyer, who now works at SANSA, lived there with her parents in the 1950s. Her father was Mr Edward Smalberger who was for many years the projectionist at the Adelphi Cinema. This information was confirmed by Mrs Magda Odendaal, whose family (Wrigley) lived at 15 High Street at the same time. Their house is now Tutamen Antiques. Magda married Wessel Odendaal, whose father Samuel Jacobus Odendaal was the building site supervisor at the construction of the New Harbour. The Odendaal family now lives in Voelklip.

The Adelphi Cinema was destroyed by fire in 1981.