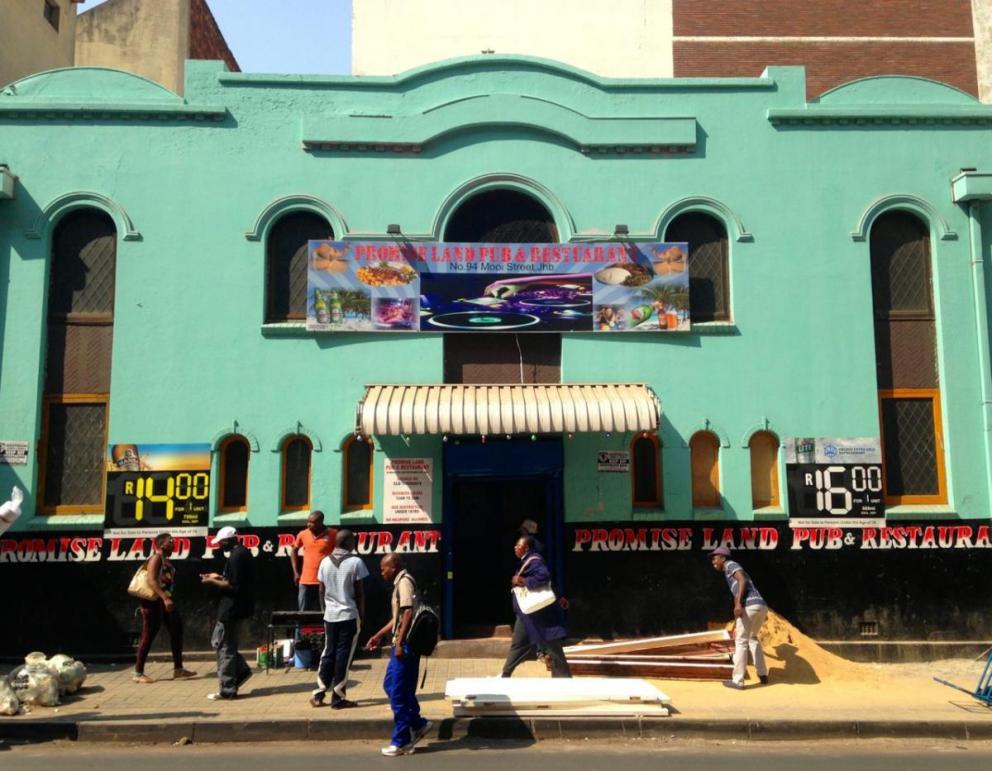 The captivating story below appeared in the 1982 issue of Restorica. It was compiled by Hymie Amoils and traces the origins, history and significance of the Poswohl Synagogue in Mooi Street Johannesburg. We visited this Provincial Heritage Site, now the Promise Land Pub and Restaurant, yesterday and noticed internal alterations taking place. It would be interesting to see if the necessary approvals from the Provincial Heritage Resources Authority Gauteng (PHRAG) have been secured. Thank you to the University of Pretoria and the Heritage Association of South Africa (HASA) for giving us permission to publish.

In early Johannesburg, Jewish religious life was dominated by three congregations, all of whose synagogues were built within the historic Randjeslaagte triangle. The oldest was the President St. Synagogue, founded in 1888; the Park Synagogue adjacent to Park Station, was founded in 1891 and opened by President Kruger in 1892, and the Orthodox Hebrew Congregation in Fox St. was founded in 1892.

After the Anglo-Boer War, more congregations were formed, and new institutions came into existence in order to serve the expanding Jewish community. Apart from other areas, three more synagogues were built in the Randjeslaagte area. Of the goal of six constructed in this area, only two remain: The Great Synagogue in Wolmarans St., built in 1913, which was brought into being by the amalgamation of the first three already mentioned, and the Poswohl Synagogue in Mooi St., built in 1921. The latter is situated in the central Johannesburg Business District, very close to the City Hall.

Poswohl, a small Lithuanian village, was the home, some 150 years ago, of Rabbi Abseli, who became known as “the Poswohler Rabbi”. Later he served as a Rabbi in Vilna, where his reputation as a scholar and sage brought the village of his origin the only fame it seems to have acquired in Eastern Europe.

At the turn of the present century, some of the Jewish inhabitants of Poswohl emigrated to South Africa and settled in the eastern portion of what is now downtown Johannesburg. Records show that from 1912 the Poswohlers held religious services in private homes. By 1920, the community was in a position to purchase a piece of real estate in Mooi St., on which the building of a synagogue was begun in 1921. The foundation stone was laid by the late Mr. Abraham Beinashowitz in that year. This synagogue and its community flourished until after the Second World War, when the growth of this part of the city as a commercial centre, and also  the growing prosperity of members of the community, brought about the gradual departure of families to the newer residential suburbs of the city. What was once a thriving residential area became semi-industrial, and gradually the synagogue lost its congregation. However, the building still stands in its original condition, and has never been deconsecrated. 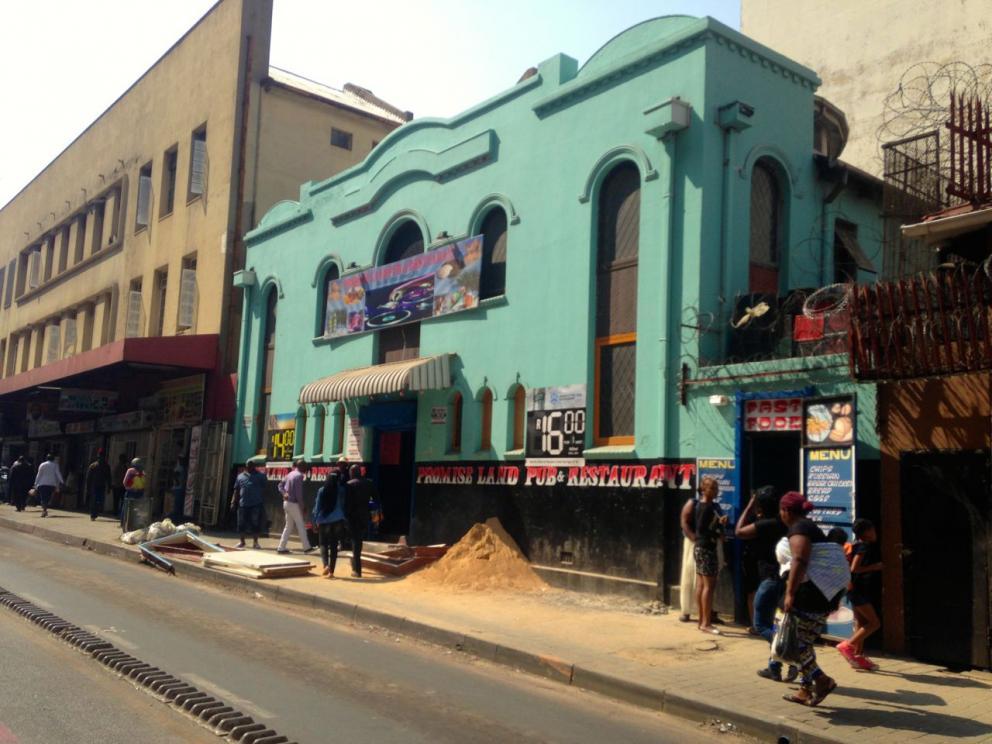 The synagogue was a manifestation of the faith that these immigrants from Poswohl had in their new country, and a token of their trust in its religious tolerance. It embodies their commitment to South Africa. Unlike the great Synagogue in Wolmarans St., it is not a grandiose building, since the members of this community were simple working people. It is a monument to the faith of the ordinary men and women who lived around it and made it the centre of their cultural and spiritual lives. It is a record of the pioneering years of Johannesburg, built before the rough-and-ready mining-camp era had come to an end.

This synagogue is also, incidentally, a memorial to a community that no longer exists. The Jews who remained in the village of Poswohl perished in the Holocaust during the Second World War. The Poswohl Synagogue in Johannesburg is believed to be the only memorial anywhere in the world to the Jews of Poswohl.

The immigrants from Poswohl, in forming their own congregation, wove their community into the fabric of Johannesburg life, but created their own distinct motif in its complex pattern. There are few, if any, examples elsewhere in the world of a synagogue such as this one, established by people from one small village in a city half-way across the world, still standing in its original condition, and habitable.

The building, on a stand of 50 ft. by 50 ft., was designed by S.V. Mann of Johannesburg in 1921. It is of brick, with a corrugated iron roof, and is surmounted by a dome, a rare architectural feature in Johannesburg today.

The contractor who built the synagogue was Mr K. Achber, a founder member of the synagogue. Neither he nor the architect had ever designed or constructed a dome before this, and Mr. Achber later said that he had many a sleepless night worrying about the building of that dome. In measuring up and drawing plans of the building recently, the architect concerned commented that the design was to say the least, “unconventional”. 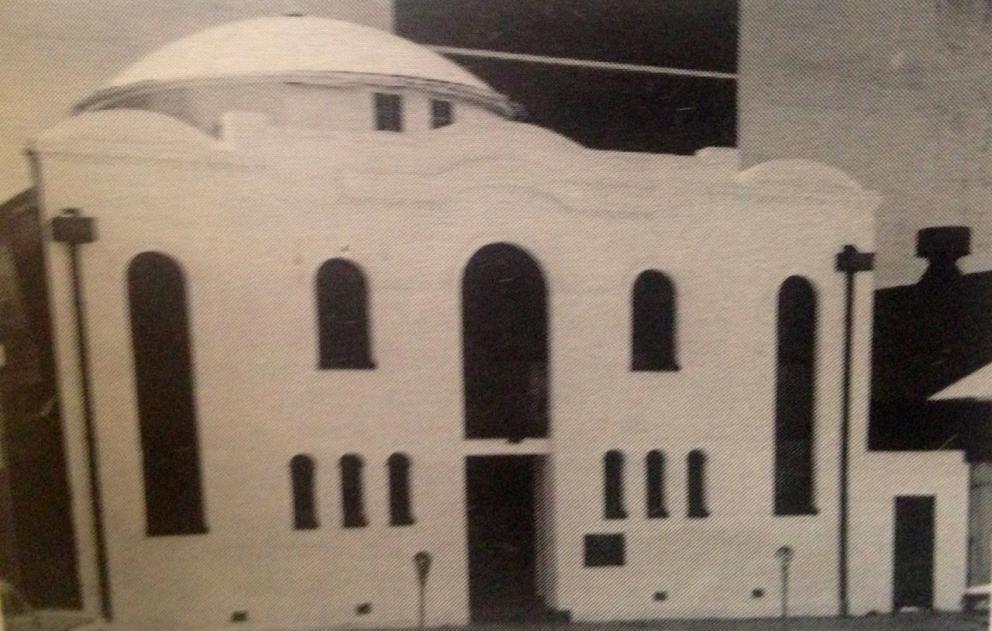 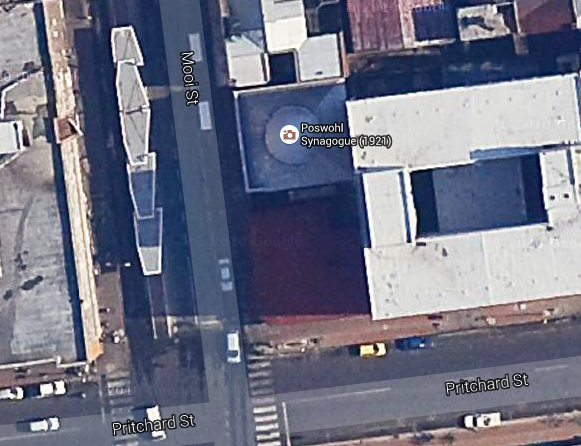 The finely composed facade is an original interpretation of the Byzantine style, of which there are very few examples in Johannesburg (the Great Synagogue in Wolmarans St., being one example).

The plan form of the building, the position of the cantor’s platform, the ark (in which the scrolls of the Law are housed) and the inclusion of a women’s gallery, are typically arrangements for an orthodox synagogue.

The internal space is a pleasantly proportioned volume, with light entering through leaded-light windows. It is surmounted by a dome. The dome is twofold, having an inner and an outer component, with a space between the two. The structure of the dome is lightweight, consisting of timber trusses. The external covering is of thin metal sheeting. On top of this dome is a unique feature, a three-dimensional Star of David. It was constructed by Mr M. S. Kavin, a plumber by trade and a founder member of the synagogue.

Much of the detailing of the building is noteworthy. The ark is decorated with finely moulded plasterwork, which is mostly in good original condition. The pressed-metal ceilings, cornices and the leaded-light windows are building components that are no longer manufactured.

The Poswohl Synagogue owes its preservation to three families, descendants of Poswohlers, who maintained the building over the years following the departure of most of its congregation.

Mr. J. Beinashowitz, whose father laid the foundation stone was responsible for keeping the building intact and in a reasonable state of repair for many years. His efforts were supported by the Miller and Segell families, who made financial contributions.

Mr. Joe Meyerson annually organised services in the Synagogue for the High Festivals, thus preserving the continuity of the synagogue as a religious centre and ensuring that it was never deconsecrated.

Mr. Hymie Amoils has more recently, been responsible for extensive repairs and maintenance work to the fabric of the building. It was through his efforts that the building was brought to the attention of the National Monuments Council and accepted as a National Monument by them in 1981. 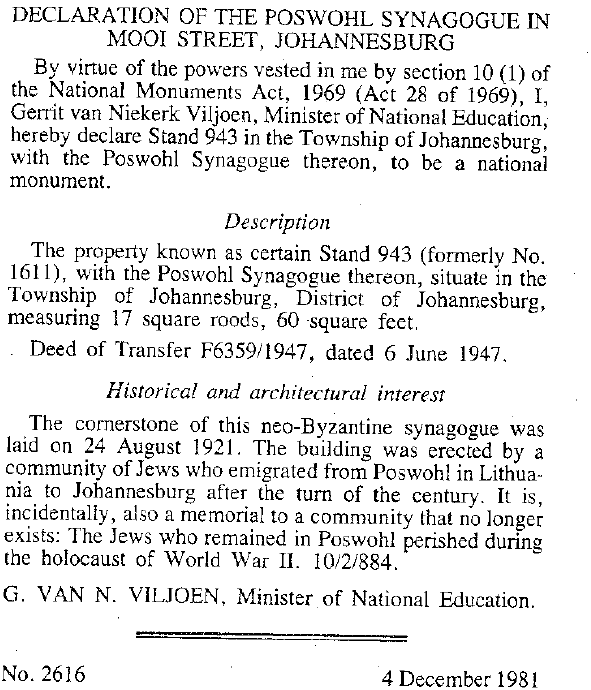