The Grange - The story of a famous farm in Griqualand West 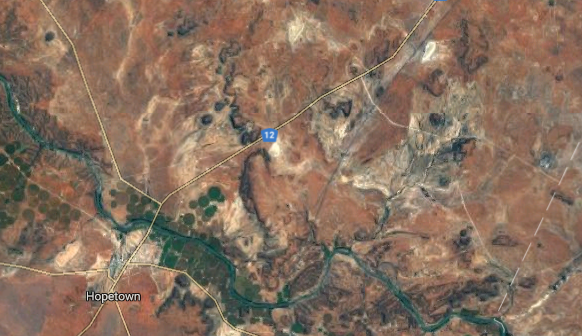 The Grange was a majestic farm in Griqualand West that became well known as the first stop after the Orange River on the journey from the Cape to Kimberley. The Fincham Family owned it for many years and welcomed many famous visitors making their way to the diamond fields and beyond including Winston Churchill, Charles Warren and Cecil Rhodes. Below are a few powerful passages from the diary of Allister Thornton Fincham that tell the story of the transformation and ultimate tragedy of the Grange. Thank you to Spencer Fincham for sending the diary through.

It was at Hopetown on the third day of February, 1871, that I was ushered into this world. My parents resided on the farm named Witteputs, which after it had been surveyed, was renamed The Grange.

My parents settled on this farm whilst Griqualand West belonged to the Griqua Tribe under Captain Waterboer who resided firstly near Douglas but had moved to live on a farm on the banks of the Orange River about twenty miles from Hopetown.

The Griquas were wealthy. They owned their own land and many horses, cattle, sheep and goats. The Bo-landers, as the Traders were known, came from the Western Province with long tent wagons and carts of various kinds which were loaded with hogsheads of cheap brandy, known by the name of Cape Smoke, and wine. The wagons, brandy and wine were exchanged for cattle, sheep and goats and, in many instances, for farms which they got at very low prices and in this way the Griquas impoverished.

David Arnot received title to a number of farms of which the Grange was one. At a later date when Mr. Arnot sold the farms my Dad purchased the Grange for 500 pounds payable within thirty years plus interest at 6% per annum payable half yearly. The capital and interest was duly paid. On the farm The Grange my parents raised a family of twelve - nine sons and three daughters. I am the sixth of the sons. My parents at the time were very poor. The whole of their possessions were an old tent wagon, 10 oxen and a few sticks of furniture. There was no dwelling house of any sort. Hence Dad and his eldest children had to set to make bricks and commence building to get cover for the family.

Luckily, the water table in those far gone days was near the surface hence there was little difficulty in procuring water for mixing soil and making bricks. However, it was a struggle to provide for the growing family. At nights time my Dad was busy making veld shoes and my Mother assisted by way of sewing the upper leather to the soles of the shoes. There were no schools thus Dad and Mother had to teach the children to read and write and also give them Bible lessons. Some days Dad would do work for neighbours such as building kraals, painting carts and wagons and in this way he earned money or kind to enable him to feed and clothe the family.

Now something relating to myself. As a very young boy I became very interested in books and loved to learn and read. In 1868 the first diamond was found in the District of Hopetown. The discovery led to more prospecting being done and brought money into circulation of which Dad took advantage. He, being successful to a moderate extent, provided for further improvements on The Grange.

Then came the discovery of one of the diamond mines at Kimberley. Happily for us, the main wagon road from the Cape Districts was opened up over our farm and this enabled Dad to open a small supply store where travellers could purchase foodstuff. Eventually the store became a large one. Besides the store a relay station for Gibson Brothers passenger busses was arranged there and whilst the teams of horses were being changed Mother was able to supply meals to passengers, all adding a little grist to the mill.

I can remember occasions when the late Cecil John Rhodes stayed one night at The Grange on his journeys from Kimberley to Cape Town. I can also recall a visit by the late Sir Charles Warren when he passed by with a column of ""Rooi-baatjies"", British Soldiers, when he was on his expedition to settle a dispute with the Free State. When this dispute was settled activity increased and more money came into circulation and things became more prosperous. 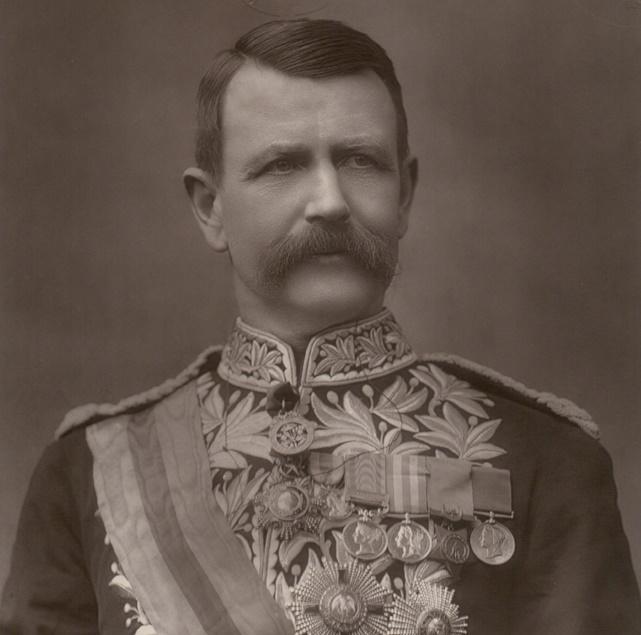 The second visit by sir Charles Warren was when he came to settle the Griqua rebellion. At the end of this a Land settlement Board was appointed, Sir Charles ranking as Administrator. My Dad was elected by the Burghers, who took part in quelling the rebellion, to represent them at the Land Board. During these happenings I grew older and had reached the age of ten years and naturally became more interested in what was taking place in and about our district.

The third visit by Sir Charles Warren was when he came to settle the matter around Vryburg and Mafeking with the "Free-booters", Transvaal Boers and natives.

By this time Dad had become in a position to engage a tutor to give us schooling on the farm. The hours were from 9 a.m to 12 noon and from 2 p.m to 4 p.m daily except Saturdays. On Sundays, an hour of Bible lessons and singing. At the age of thirteen I had to assist in the store and learn book-keeping. When eighteen years old I was able to keep a set of books in Double Entry.

Now I come to the most important event in my lifetime. In 1894 I travelled by oxwagon from Vryburg to Johannesburg to join in happy matrimony with my beloved girl friend, Evelina Gertrude Howarth whom I married on 14th. November, 1894. We returned by oxwagon to Vryburg, which was my home at that time. The journey took fourteen days to complete, calling at Potchefstroom, Klerksdorp, Wolmaransstad, Schweizer Reneke. The country was beautiful, green all over with plenty of grass and veldt flowers. God willing, we hope to spend our Diamond Wedding Day on 14th. November, 1954.

Things rolled on fairly quietly until after the Jameson Raid. The Afrikaners had become anti-English. Then came the Boer War. Lord Methuen with his column passed over The Grange. Eleven thousand men arrived on Monday morning and moved off on Wednesday afternoon in the direction of Belmont. On Thursday morning the battle of Belmont was fought, the results of which I need not here reiterate. 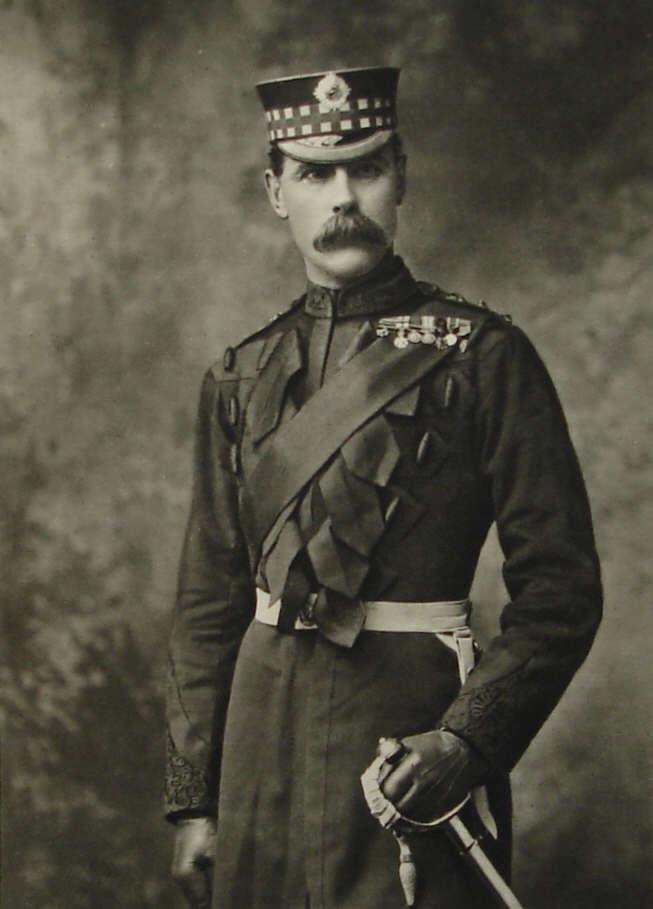 Accompanying Lord Methuen's column was a young gentleman named Winston Churchill, who represented a London Newspaper, had purchased at Cape Town a four wheeled horse-drawn carriage and two ponies. On his arrival at my farm, The Grange, his driver discovered that a four wheel carriage was too much for two ponies to draw over our South African roads, hence he wished to exchange some for a two wheel Cape Cart and, as I possessed a very good Cape Cart, an exchange of vehicles was made which enabled the young man to continue his journey in comfort without tiring his ponies. For many years my family and I enjoyed driving in the four wheeler. The same young man, now Sir Winston Churchill, has become Prime Minister of England.

My Dad and Mother had both passed away prior to this date and I having become possessed of The Grange by purchase price then paid by me was 5,500 pounds. The Grange being the first watering place for men and horses, it became the first stop after the Orange River.

I carried on farming ostriches, cattle, horses, sheep and angora goats very successfully for some years, when at last a great drought struck parts of the Cape Province, Victoria West, Carnarvon, Kenhardt, etc.. When a great trek with sheep followed, the thousands of sheep which were making for the O.F.S and North of Kimberley all trekked over my farm and left it bare without a blade of food for my animals to feed on, resulting in my having to trek to Vryburg district with my cattle and sheep. For horses and goats I found grazing on another part of our district. Ostriches I had to feed Aloes, Mealies, Lucern and bones. At the end of three years it was possible to bring home such sheep as I had left out of my flocks. The cattle I disposed of at Vryburg. The sheep had become infested with many parasites and wire worm, leaving a balance of poor animals numbering 800 out of 3,000 head previous to my trek. Ostriches also became infested with wire worm resulting in great mortality and loss.

During this struggle I became interested with my brothers in General Businesses in Vryburg, Mafeking and Ermelo wherefore my share of capital was required. To meet this I raised a bond on my farm. Then came the slump in Ostrich Feathers, motor cars arrived resulting in a big drop in the price of horses, in fact, no demand for them. Eventually ostriches were killed, their meat being used for native nations. Ill luck followed me until at last a general slump came. Consequently the Banks required money and advances and bonds had to be paid.

During the crises it became necessary to dispose of my farm, a family home where all of us were brought from birth to manhood. What a tragedy! The only redeeming factor was that, my wife and I being married by Ante-nuptial Contract, her household furniture and my Life Policy were saved. Otherwise I walked out without a penny piece to make a new start in life.