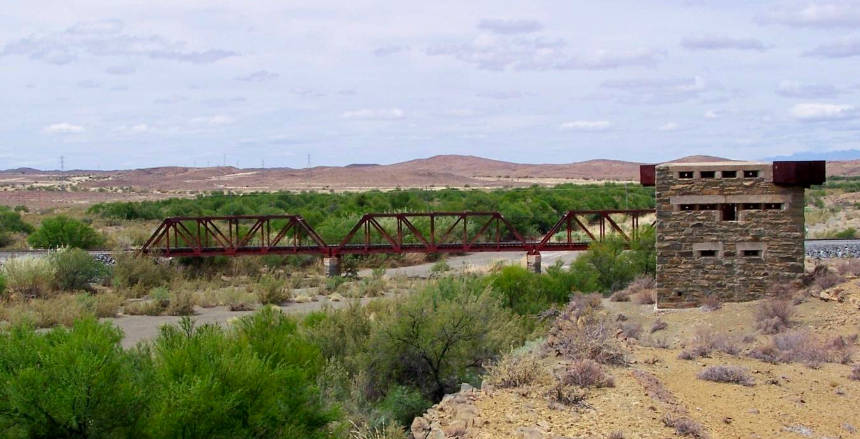 The Cape Government Railway’s [CGR] construction of a railway from Cape Town to Kimberley (1875-1885) was governed by the imperatives of rapid construction and the limitation of costs. Consequently the alignment followed contours and minimised cuttings and embankments. Sections of this alignment became inadequate as traffic increased and faster times for train operation were demanded. Consequently the re-alignment of certain sections became imperative for operating and cost efficiencies. This work was tackled piecemeal when funds were available. The Boer War, branch line development and an economic recession which reduced CGR revenue (mid-1900s), restricted these regrades.

In 1906 the CGR General Manager [GM] reported that “surveys for the reduction of gradients in one or both directions, that is, for Up and Down traffic, or for Down traffic alone, between Grootfontein [later Koup] and Dwyka have been completed.”

As part of this upgrade, bridges in the section were to be strengthened. Reports and drawings were prepared and an indent for the necessary materials was sent to England in February 1906.

I strongly recommend that this work should be steadily continued .... with a view to reducing the cost of haulage ... the heavy passenger traffic from Cape Town is especially handicapped by the gradient between Touws River and Dwyka ... by an expenditure of    £276 000 a saving of £8 700 could be affected after payment of interest.

By regrading a portion of this section from Dwyka to Grootfontein [Koup] at a cost of  £54 000 there would be a saving of £2 900 per annum after payment of interest.  Should the traffic increase, the saving effected will be greater in proportion.

A start was made south of Dwyka with a view to completing the section of line between Grootfontein [Koup] and Dwyka and the strengthening of the Dwyka River and Blood River bridges was nearly completed.

Map showing the railway line above the N1

An economic recession in 1907 and 1908 impacted adversely on the regrading programme. In 1908 then GM, TS McEwen, stated:

Nothing has been done in this direction [track regrading] during the year... the traffic to the north over the Western System is heavily handicapped by the severe gradients between Touws River and Dwyka which necessitate a reduction of the loads of goods trains by almost one half between these points.

An outlay of £276 000 in regrading this section would, with the present exceptionally low traffic, result in a saving of £9 952 per annum after paying interest charges and as the traffic increases the saving would be in greater proportion.

As an instalment of the larger scheme the sections between Grootfontein [Koup] and Dwyka could be regraded at a cost of £53 371 and with the existing traffic a saving of £1 750 per annum in the cost of working the section would result.

Near the end of the first decade of the 20th century, the finances of the CGR improved and the sectional regrading of the Western System continued. The CGR GM in 1909 reported:

In order to provide reproductive work for unemployed Europeans, work was started between Dwyka and Grootfontein [Koup] and fair progress made with 209 men employed. Owing to a strike among the labourers, the work was given over to contractors, and the men transferred to the Eendekuil – Graafwater extension... It is hoped to complete the reduction of gradients between Dwyka and Grootfontein by the end of 1910 when it will be possible to work 1 in 66 loads in both directions between the points named and thus save considerable train mileage.

CGR correspondence in the Cape Archives refers to the expropriation in 1909 of land from the farm “Bloed River’s Plaats” (Owner NJS Swartz) for the reduction of gradients “Blood River and Dwyka”. With the formation of the Union of South Africa in 1910, the South African Railways (SAR) took over this work. The SAR Magazine April 1910 reported:

The re-grading of various lengths of road between Touws River and Prince Albert Road is being pushed rapidly forward, and when completed will enable greatly increased loads to be hauled over this section.

The SAR Magazine August 1910 reported [a rewrite of what the CGR GM wrote]:

With the view of providing relief work for unemployed Europeans, the Government authorised the expenditure necessary to carry out the reduction of the gradients on the portion of line Dwyka and Grootfontein. Very fair progress was made, but, owing to difficulties being experienced with the men, they were transferred to the Eende Kuil - Graafwater extension, and the work was placed in the hands of contractors. It is anticipated that the section will be completed by the end of the year, when a considerable saving will be effected in the working of traffic thereon.

Further on the report reiterated another comment of the retiring CGR GM:

Another point for consideration is that with the advent of Union a very heavy passenger traffic will be created between the Legislative and Executive Capitals of South Africa, and the question of shortening the time taken on the journey will become of urgent importance.

The altitudes of the section Dwyka, Blood River (later Antjieskraal), Ketting and Grootfontein [Koup] clearly illustrate that in the central Karoo some of the steeper gradients are from north to south. [Distances from Cape Town] 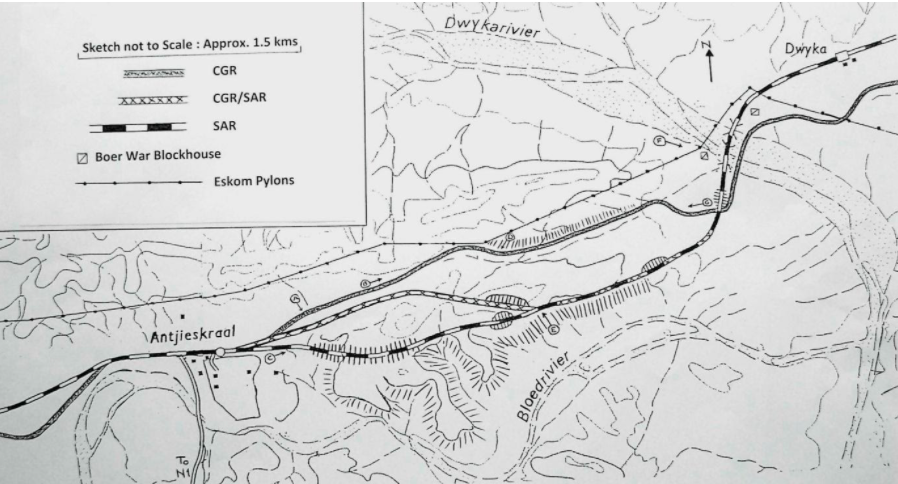 The Karoo’s semi-desert contributes to the retention of landscape features and the manifestations of previous constructions. Consequently railway archaeology is promoted. An inspection of the section Dwyka – Koup readily reveals the CGR’s alignment. The section Dwyka – Antjieskraal (Blood River) is particularly interesting as there are three alignments viz. CGR; CGR/SAR; SAR over the extended roughly L-shaped ridge.

From Blood River the CGR alignment follows the contour crossing a single arch bridge of dressed blue/grey stone before going steeply straight up the ridge which is crested through a shallow cutting (1 – 2m). On the northern side of the ridge there is a long embankment. A relatively expensive construction which helped compensate for the gradient on the S-curve near the summit. The alignment then runs through the centre of the valley to the bridge over the Dwyka River. In the mind’s eye the romantic can picture Class 6s labouring hard on this incline to lift their loads up the ridge. 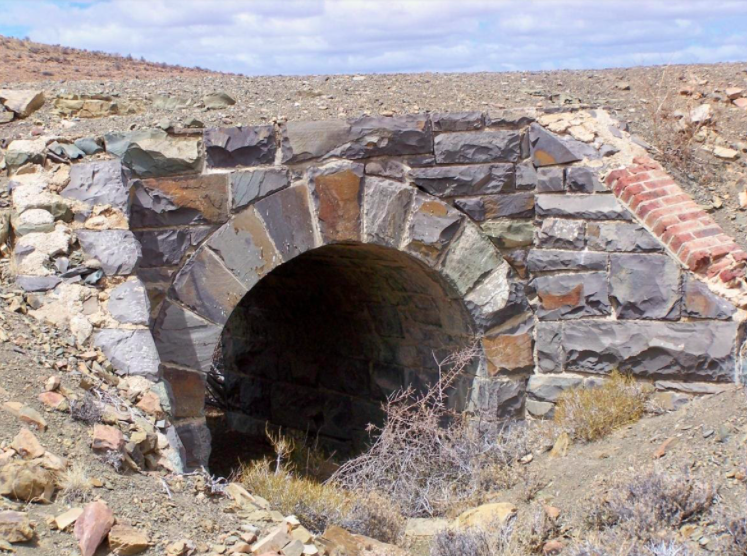 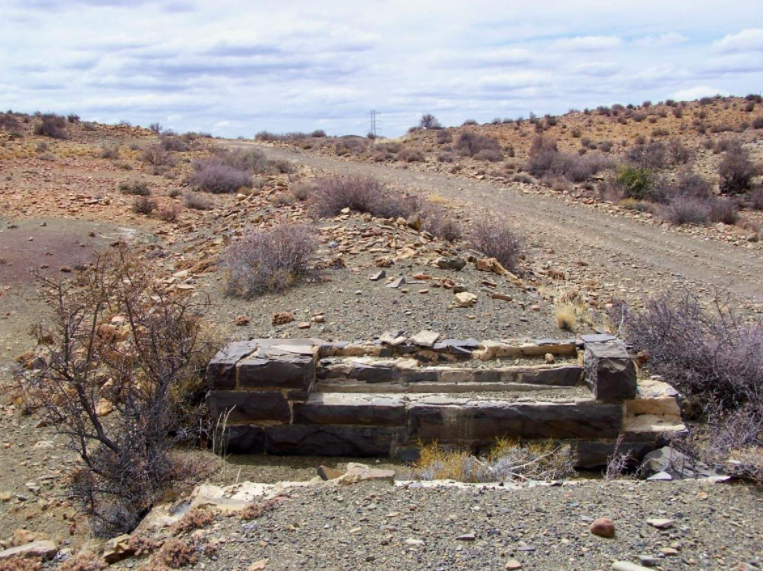 Today the Dwyka River is crossed by a Warren Truss 3-span girder bridge. The bridge stands on the stone pillars which originally supported the CGR’s flat-girder bridge. (The abutments and pillars have been heightened with concrete.) Such was the bridge’s importance during the Boer War that two stone blockhouses were built to protect it: 110 years later the blockhouses still stand as silent sentinels (see main image).

The CGR alignment has a number of dry-packed square culverts which are clearly copies of the drainage system developed by Andrew (father) & Thomas (son) Bain the Cape Colony’s famous 19th century civil engineers. 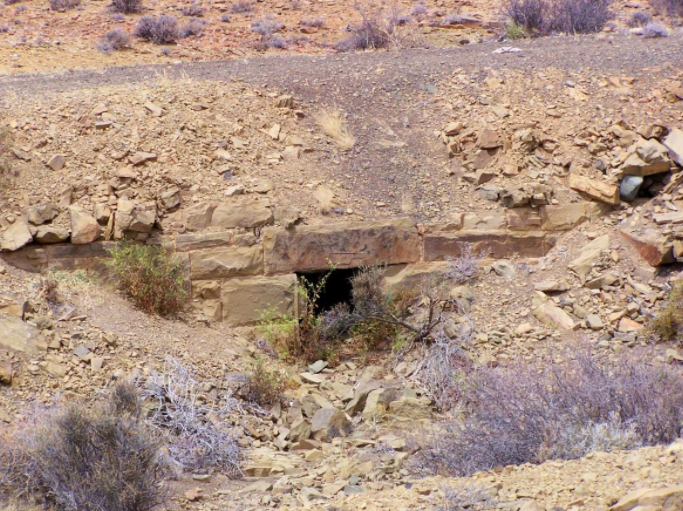 The CGR track had no stone ballast. The track was stabilised using compacted earth. Old photos and the track-bed attest to this feature.

The CGR track had no stone ballast - Allen Duff.png 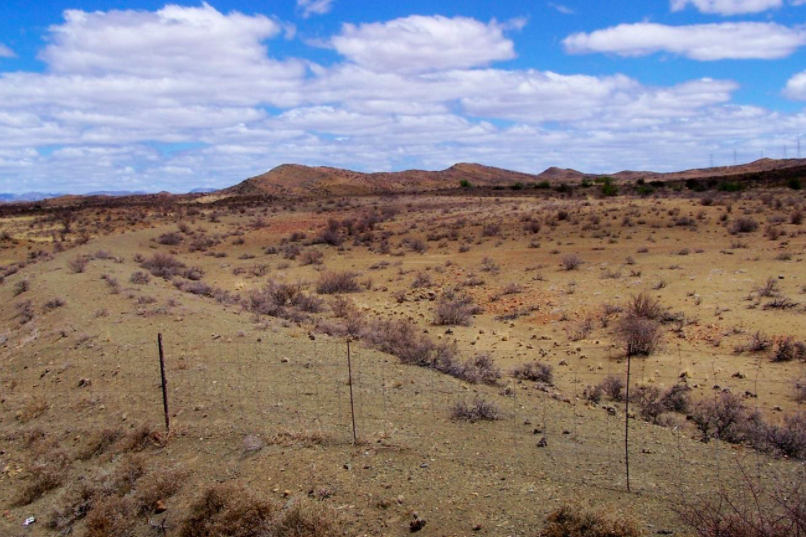 CGR track-bed at the Dwyka bridge going south over the ridge to Blood River- Allen Duff.png 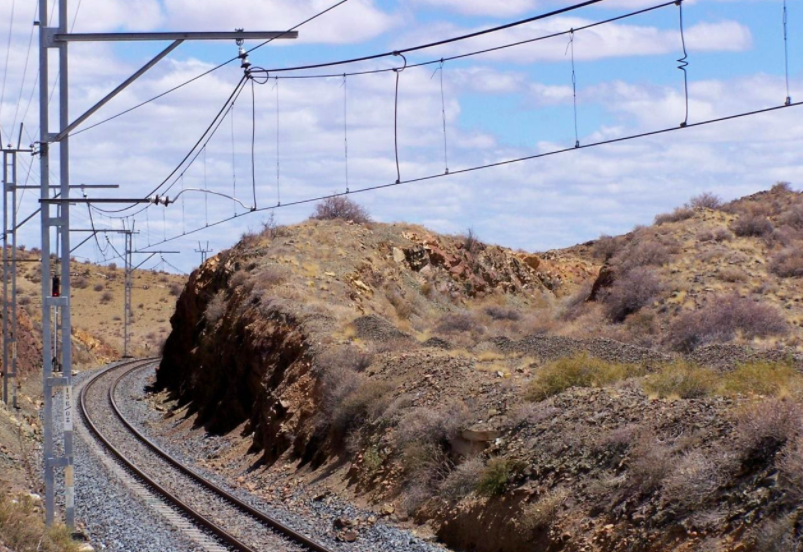 CGR SAR Crested the ridge through a cutting - Allen Duff.png 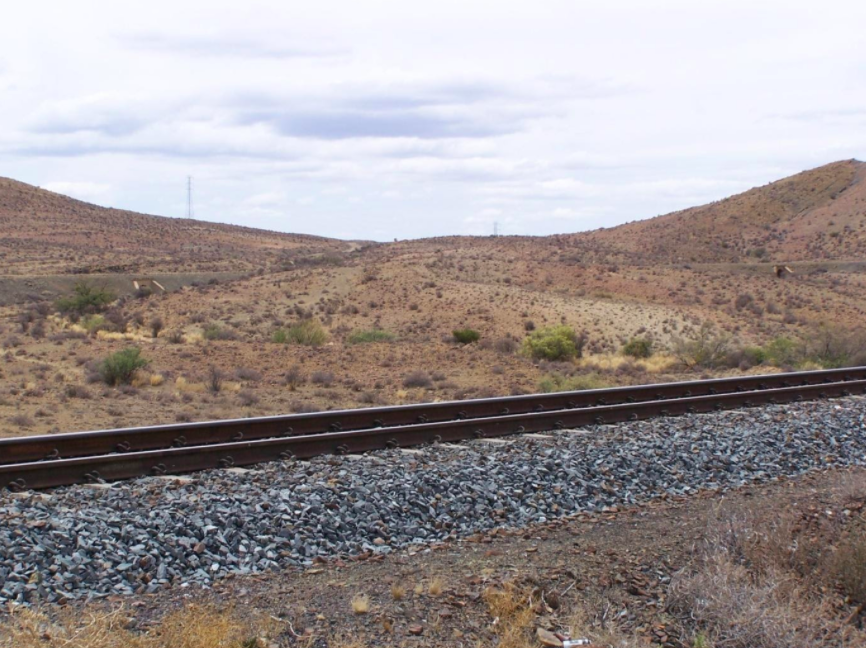 The CGR/SAR realignment followed the contour on the south side of the ridge until near the crest where the alignment continued west through a cutting before curving round over an embankment to join the CGR alignment at the northern entrance to Blood River station. Of interest is the use of concrete instead of stone for the culverts. The use of concrete in railway construction in South Africa dates from this period e.g. 1912 concrete arched bridge near Topping on the railway over the Outeniqua Mountains.

In October 1901 six Boers including Deneys Reitz, trudged northwards over this ridge and the CGR alignment. They had been separated from Smuts’s commando. In his book “Commando” Reitz wrote that they could see the two Dwyka River blockhouses in the distance. 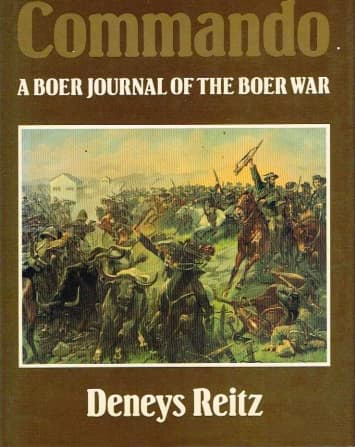 It was probably in the 1950s when the Class 25s started working this line that a third alignment was constructed. This alignment took off from the CGR/SAR alignment near the western end of the ridge on the south side. It runs through a deep cutting and over a high embankment to Antjieskraal. This alignment was electrified in 1961.

In September 1901 the ill Boer War commando leader, Gideon Scheepers, was captured on the farm Kopjeskraal on the Dwyka River about 25 kms south of the railway. The prisoner was entrained at Blood River (Antjieskraal) for transportation to Matjiesfontein and later to Beaufort-West.

Probably also in the 1950s, about 500m west of Antjieskraal, a straight shallow cutting was blasted to do away with a long curve round a rise. Thereafter directional changes to the alignment between Antjieskraal and Ketting were marginal though the elevation of the tracks was raised a metre or two. 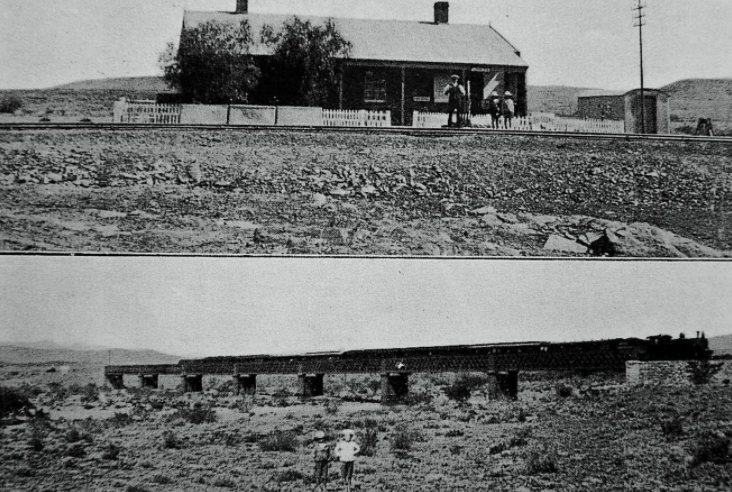 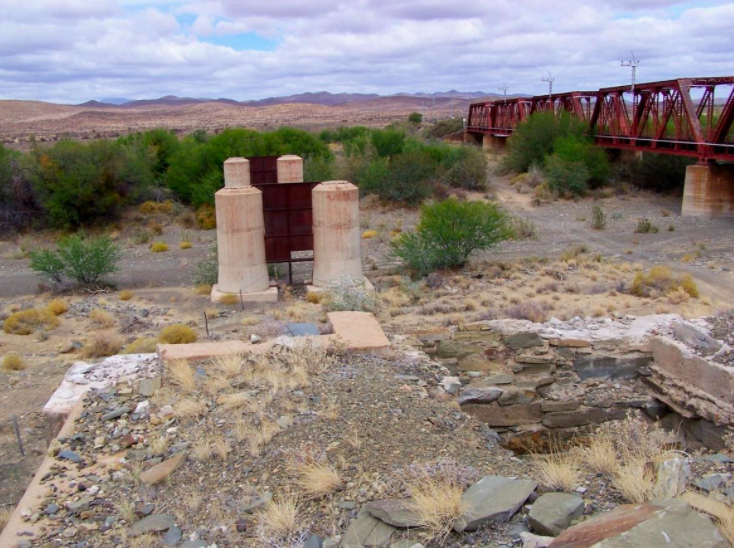 About 750m west of where the Ketting passing-loop was, is the bridge over the Blood River/Bloedrivier. The CGR’s bridge (725ft) of flat girder spans was replaced with box girders by 1908: the original pillars were retained. To strengthen this bridge, the round metal support pillars were encased in concrete in 1924. Probably in the 1950s this bridge was replaced with an adjacent 5-span Warren Truss girder bridge. The abandoned CGR pillars and cross-supports were left in situ along with the dressed sandstone abutments.

As the railway from Cape Town to the interior in the Boer War was the British army’s supply line, this was also an important bridge. It was guarded by a military camp (on the west bank) until a blockhouse was later built (on the east bank). 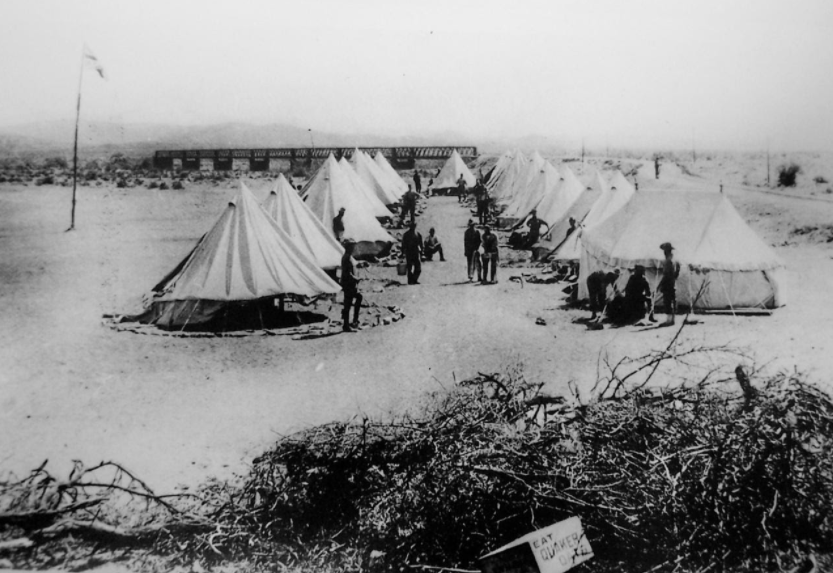 Legend has it that Rudyard Kipling wrote his poem “Bridge-Guard in the Karoo” after overnighting at the British army camp at Ketting.

My thanks to Ron Conyngham and Bruno Martin for their comment

Bridge-Guard in the Karoo by Rudyard Kipling (shortened)

Sudden the desert changes,
The raw glare softens and clings,
Till the aching Oudtshoorn ranges [Swartberg Mountains]
Stand up like the thrones of Kings -

The twilight swallows the thicket,
The starlight reveals the ridge.
The whistle shrills to the picket -
We are changing guard on the bridge.

(Few, forgotten and lonely,
Where the empty metals shine -
No, not combatants-only
Details guarding the line.)

And the solemn firmament marches,
And the hosts of heaven rise
Framed through the iron arches -
Banded and barred by the ties,

Till we feel the far track humming,
And we see her headlight plain,
And we gather and wait her coming -
The wonderful north-bound train.

(Few, forgotten and lonely,
Where the white car-windows shine -
No, not combatants-only
Details guarding the line.)

Quick, ere the gift escape us!
Out of the darkness we reach
For a handful of week-old papers
And a mouthful of human speech.

More than a little lonely
Where the lessening tail-lights shine.
No - not combatants - only
Details guarding the line!