The First English Church Across the Vaal 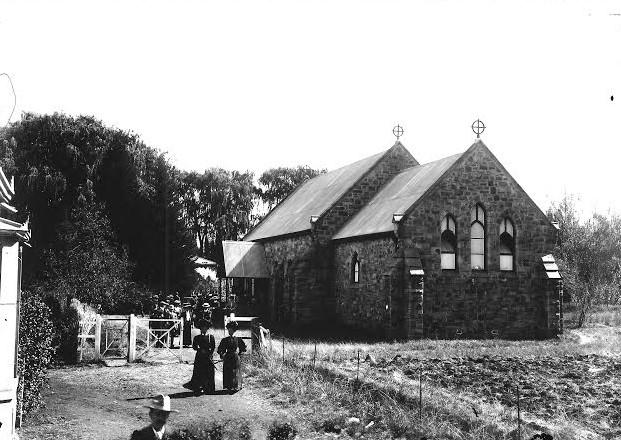 About two decades after the first Voortrekkers came to the Mooi River valley, they were followed by itinerant traders, some of whom were English speaking. The Voortrekkers were mostly farmers and in need of the wares that the traders were selling.

Dr Edward Twells, bishop of the Anglican Church in the Free State visited the Mooi River area in 1862 and held the first English service here.

The first deacon was Mr W Richardson who arrived in Potchefstroom in June 1866 to serve the 60 members of the church. The first service he held was on 26 June 1866. At first a vacant store was used as a place of worship. One of the first churchwardens was Thomas Ayres (1828 -1913), who later became known worldwide as a naturalist, but died in poverty in his house in Sol Plaatjes Avenue. 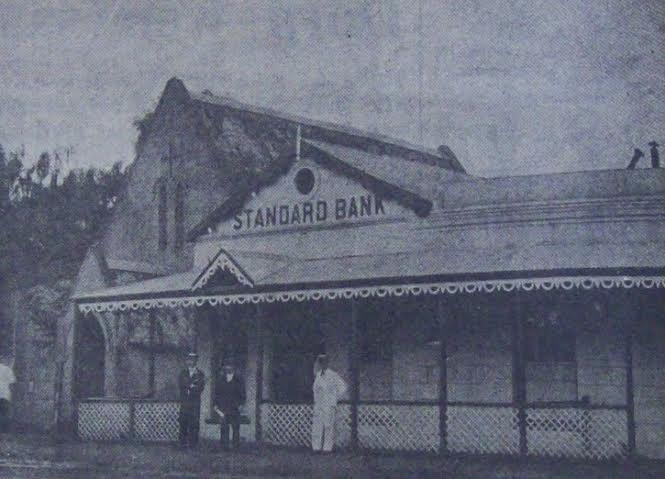 First St Mary's -The first church was erected at 166 Walter Sisulu Avenue. The Standard Bank was later built on the street front, slightly in front of the church. This photograph was taken on 7 November 1900 and appeared in the Potchefstroom Herald on 29 August 1969. The staff of the bank were FGJ King, manager, TJP Welch, accountant and PA Rainer, clerk. The church building was demolished in 1904 after the plot was bought by Carl Olën, who founded a transport service there. Olen Lane was named after him.

The foundation stone of the first building of St Mary’s Church was laid by President MW Pretorius on 25 March 1867. Bishop Twells attended and also blessed the building.

The building had seating for 80 congregants, had a high thatched roof and lancet windows, and a mud floor. It was built at a cost of £450. All buildings in Potchefstroom, at the time, had floors made from cow dung, polished with ox blood.

The Anglican congregation had quite a challenge with the mud and dung floor of their church. It was said that during the rainy season the legs of the church pews, on which the congregants were sitting during a service, would slowly sink into the soft mud floor. Everybody then had to get up and some strong men had to extract the pew from the mud before the service could continue. 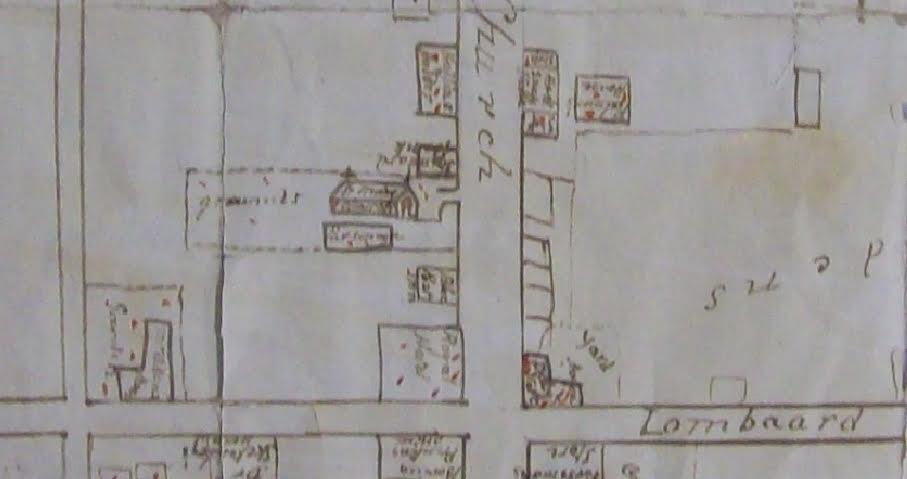 1881 Church on Palk Map - When Mrs Anna Palk drew a map of Potchefstroom in 1881 to show the town at the time of the Siege of the Fort, she added this miniscule drawing of the church. (Source: Potchefstroom Museum)

The building of a more sturdy and suitable church building was a goal but a lack of funds hampered this.

When the Swede, John Eduard Mouberg, died on May 10, 1871, his will was found tied up in a handkerchief. He left his entire estate to the “English Episcopal Church”. This comprised of three plots in Rivier Street and movable property valued at £250, in total £1 000.

This enabled the church to acquire property for a new church building and the current plot in Auto Lane was bought. The present St Mary’s was designed by John George Crone and built by Augustus Falconer. The foundation stone was laid on 25 March 1890.

The church was built from stones quarried in the Ventersdorp-Lichtenburg area. Arie Kuijers in Potchefstroom 1838 – 1988, described the building as a “hall church like its predecessor, . . . a typical English church in a simplified Gothic idiom.”

In August 1890, when the walls were almost complete, the chancel arch collapsed, leading to the resignation of Crone together with some members of the building committee. At the time £3 400 was spent, but the building was still unfinished. John William Gaisford, a local architect connected with the church for over 40 years, came to the rescue and the building was finished. 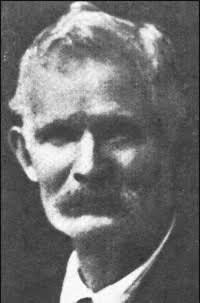 John William Gaisford was the first person to practice as an architect in Potchefstroom. He also designed the buildings of the ML Fick Primary School and the building of the Dutch Reformed Mooirivier congregation.

The inauguration service was held on 14 June 1891, although the ceiling was not yet installed. The building was consecrated by Bishop Bousfield. At the time the church only had about 85 members. Both ceiling and walls were completed in 1897. 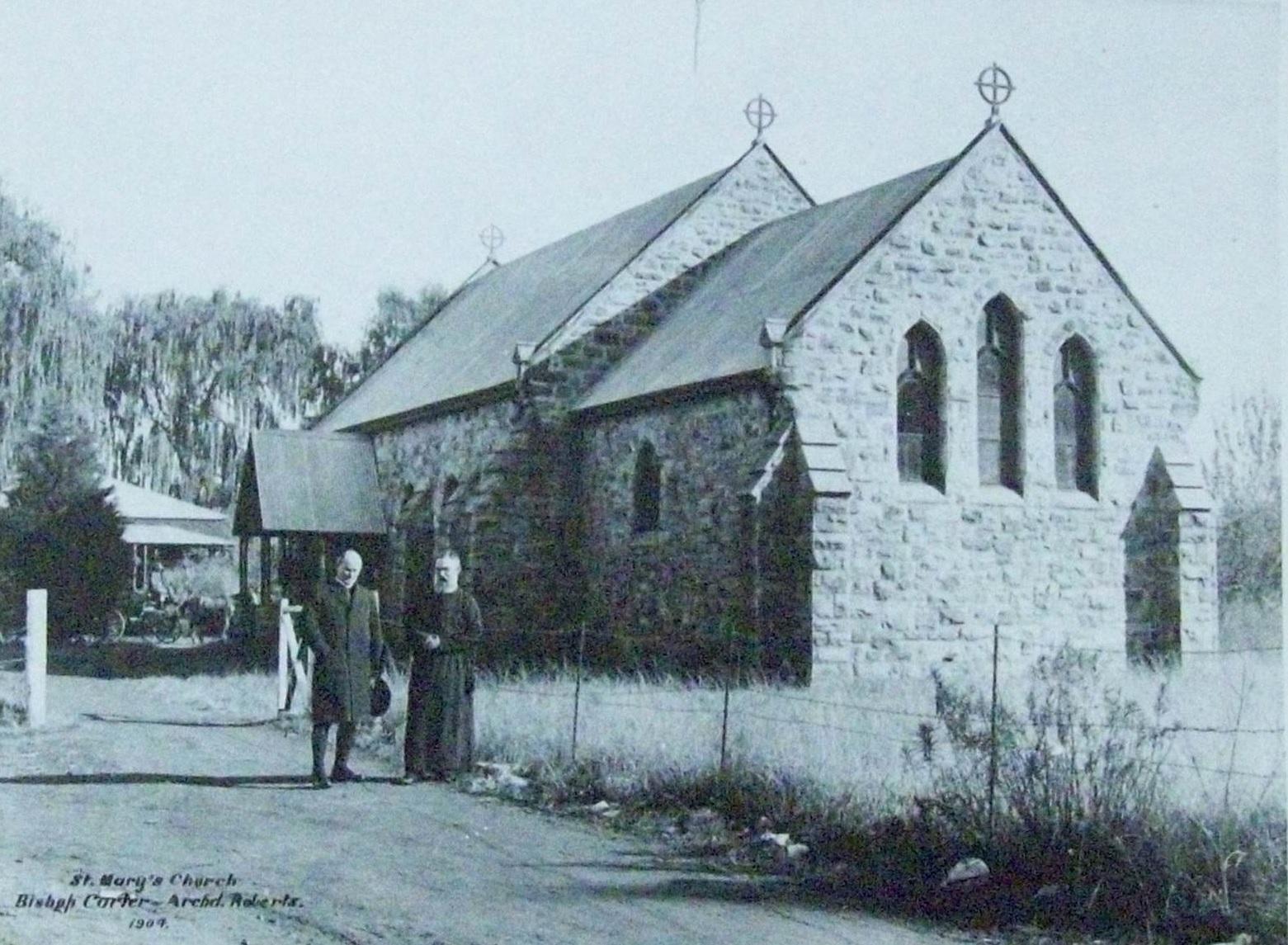 St. Mary’s Anglican Church looked like this in 1904. In front of the church stand Bishop Clarke and Archdeacon Roberts. (Photo: Potchefstroom Museum)

When Miss Farnsworth, housekeeper of Captain Hugh Baillie, who farmed in the area east of the town, died, she willed money to the church, which was used to build a rectory. To this Captain Baillie added £250 and the rectory was completed in 1896.

The influx of British soldiers after the Second Boer War swelled the membership of the church to 500 in 1910.

As a memorial to the soldiers who died in the First World War, a Church Hall was built and inaugurated on 23 October 1922 by HRH Prince Arthur of Connaught, the Governor General of the Union of South Africa.

St Mary’s is known for its beautiful stained glass windows. The generosity of Mr Ricketts in 1929 made the installation of the first three windows possible. In 1945 more windows were added and the last was installed in 1987.

The Church bought a piece of the carpet which was used for the coronation of Queen Elizabeth in 1952 symbolizing the strong ties the church has with England.

New pews were installed when St Mary’s celebrated its diamond jubilee during Easter 1951. Due to its poor condition, the original rectory was demolished in 1964 and a new one was built.

The church was declared a provincial heritage site in 1991.

St Mary’s celebrates its 150th year in 2016. A church organ from England, dating from the same period as the church was acquired early in 2015. The church is undertaking a large fundraising initiative the restore, transport and install this organ in time for the festivities.