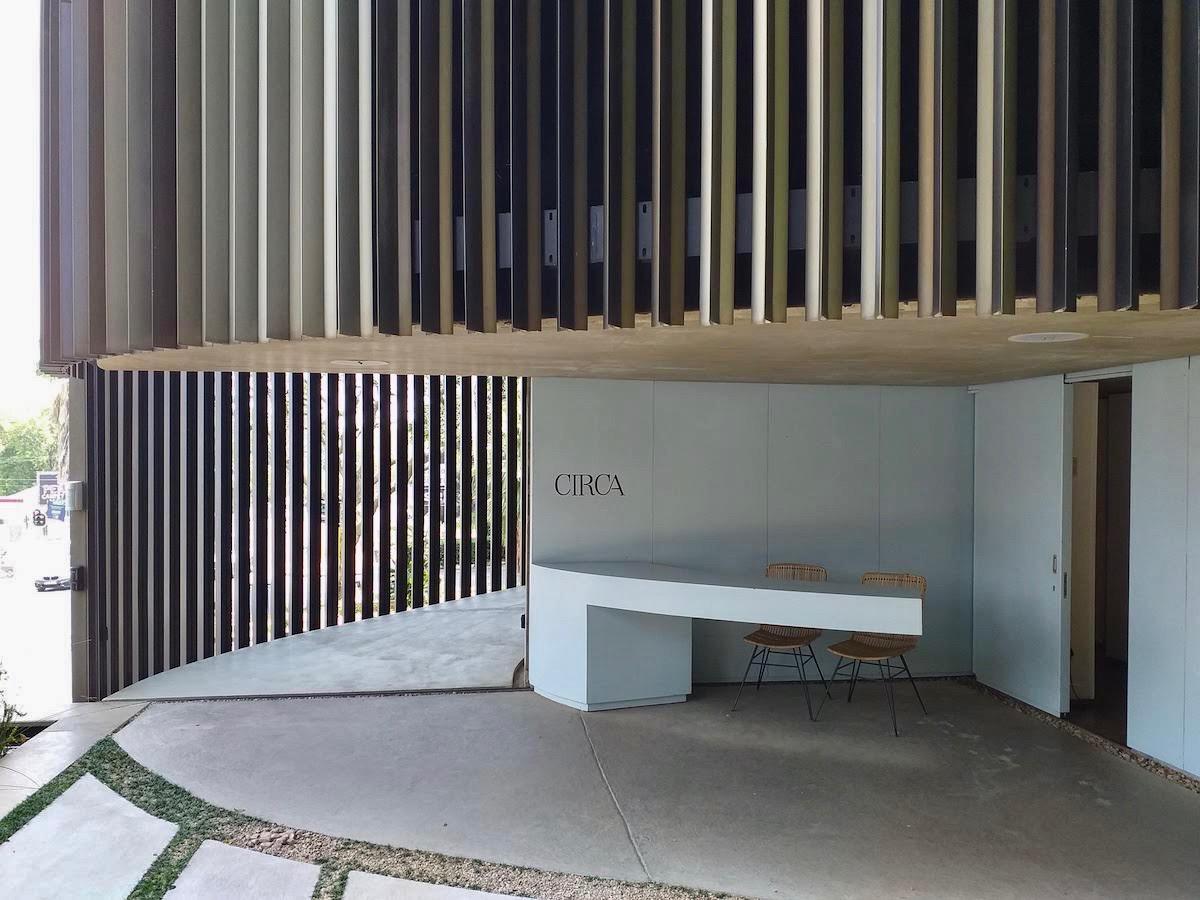 In the article below, journalist Lucille Davie explores one of Johannesburg's architectural delights: Circa gallery. The piece was originally published on the City of Joburg's website on 6 February 2009. Click here to view more of Davie's work.

There can’t be many buildings in Joburg that have a presence quite like Circa on Jellicoe in Rosebank. There’s something arresting about its tall elliptical shape that makes it easy to think it came from another planet.

Described by the architect as “a small building with a big attitude”, this new art gallery on the corner of Jellicoe and Jan Smuts avenues is causing quite a buzz around town.

Its 500 tall aluminium slates soar up to 14 metres into the sky, totally encasing the three-storey building in a protective, fortress-like fashion, yet arousing curiosity as to what this strange structure is. 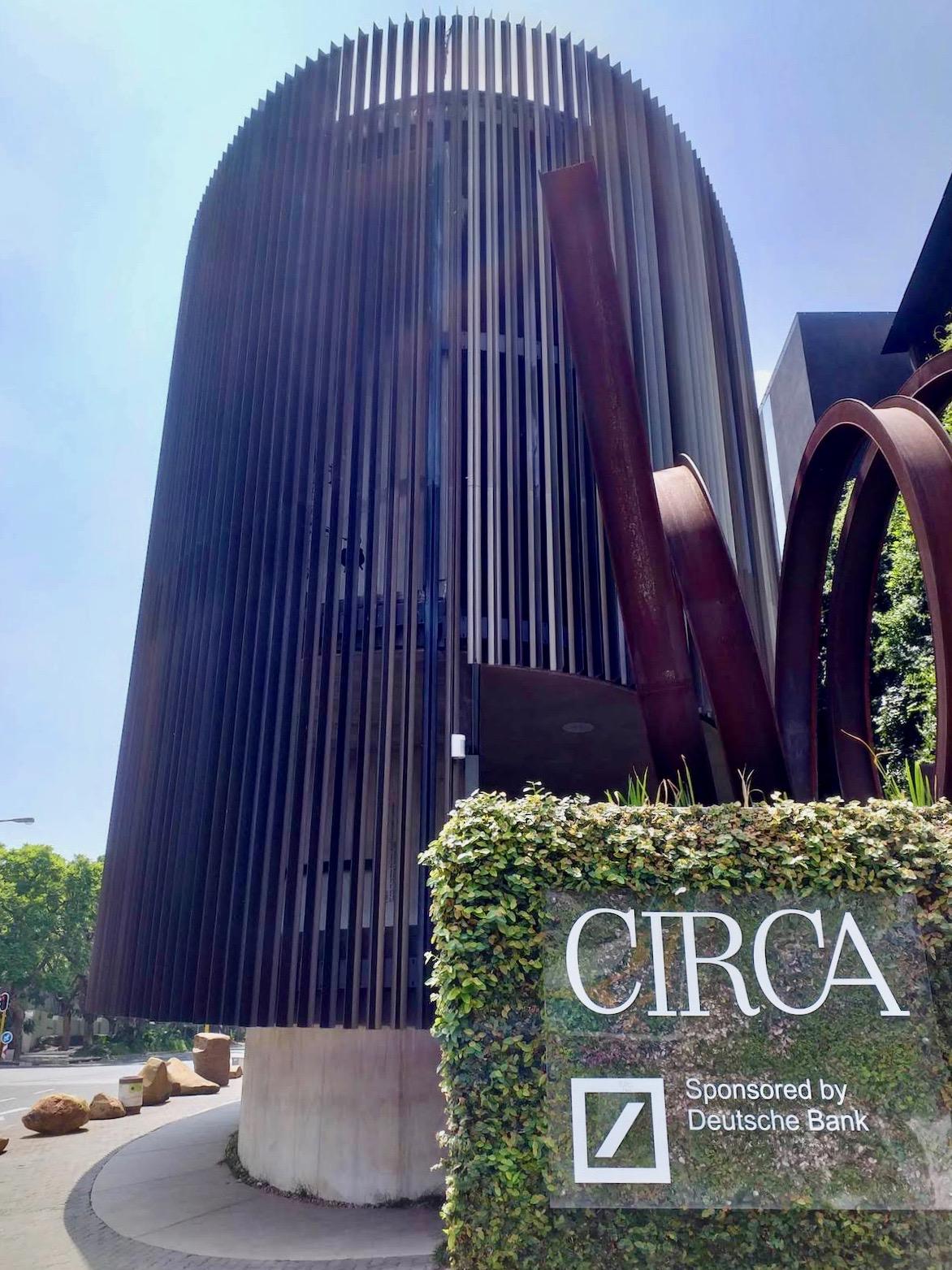 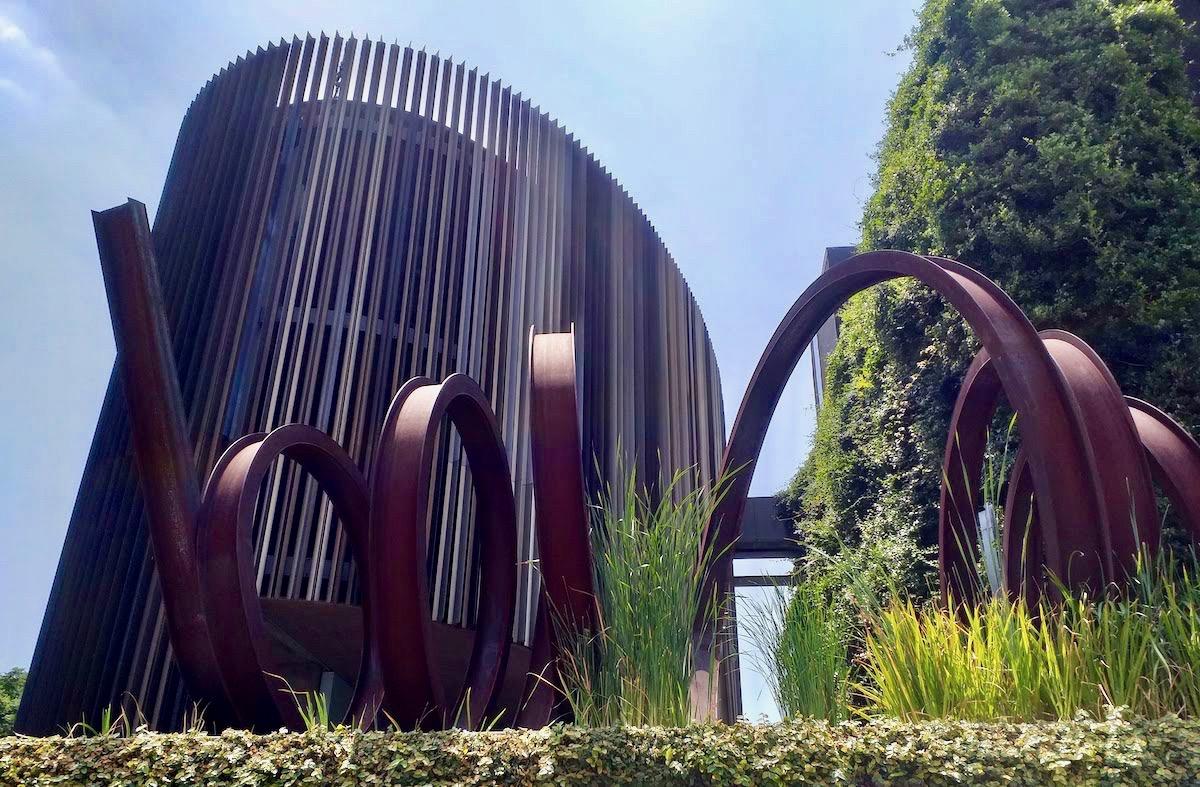 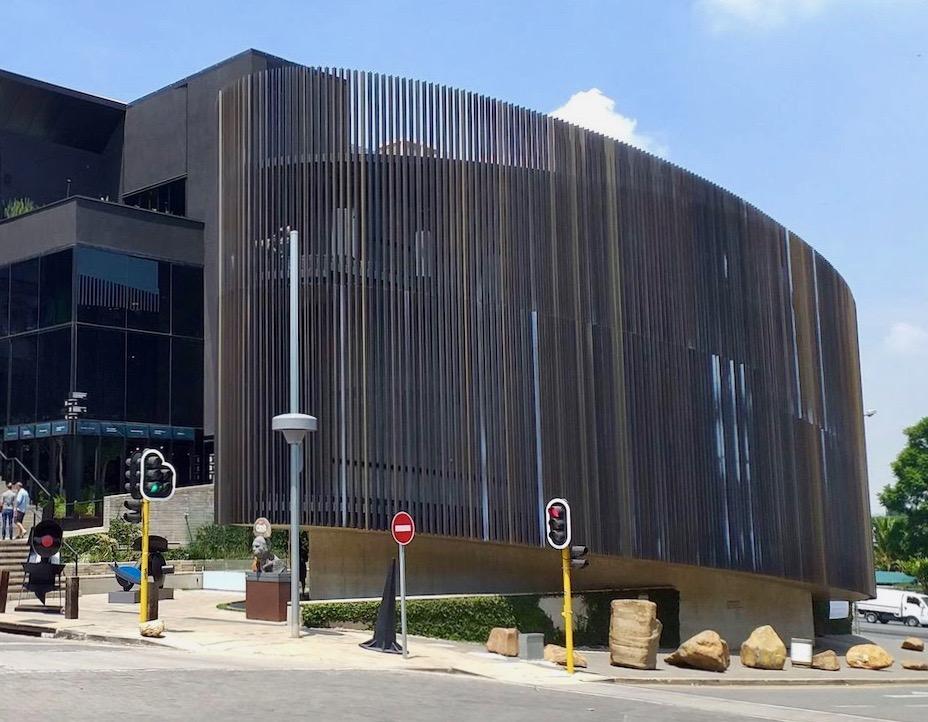 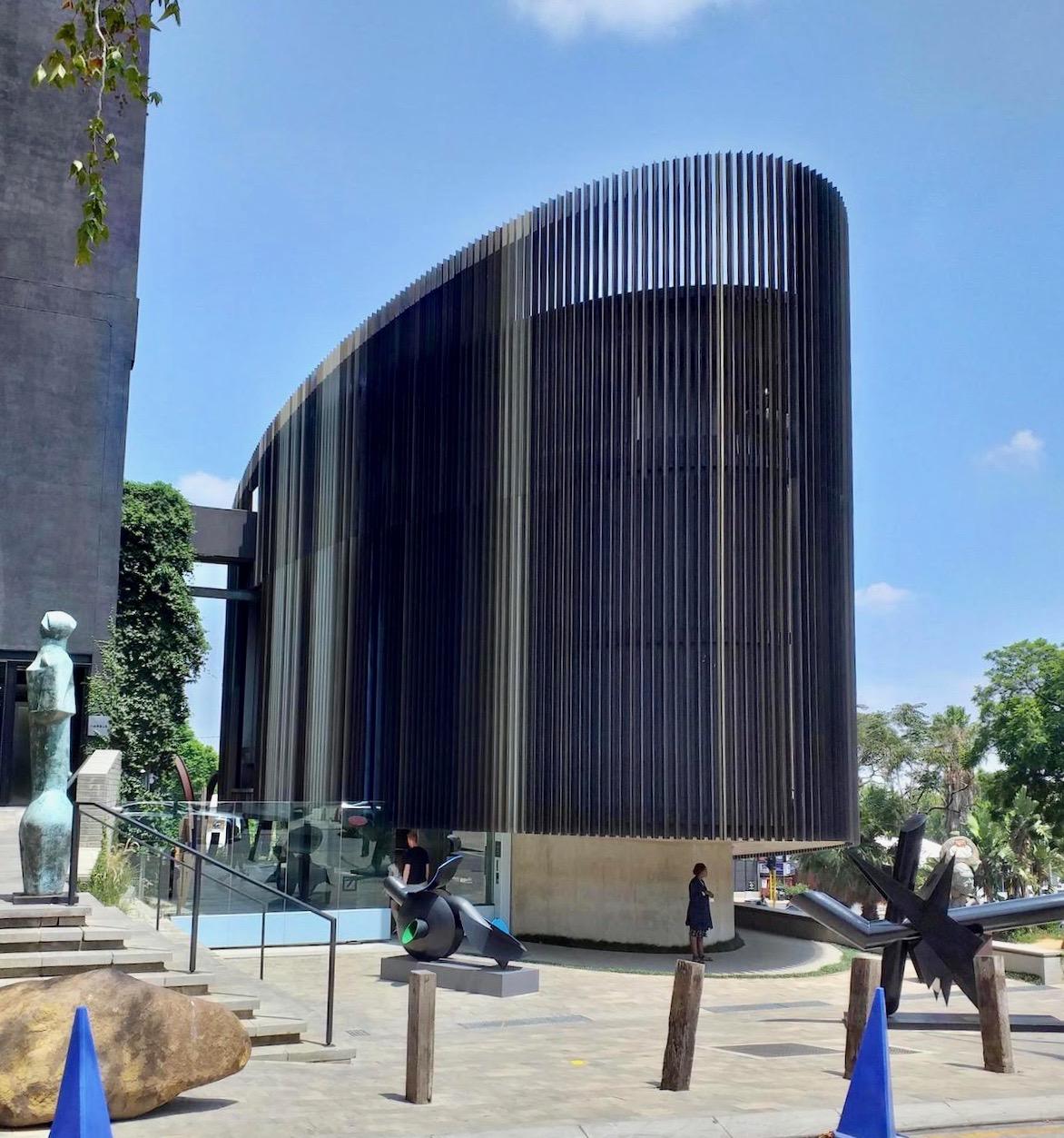 Circa from multiple angles (The Heritage Portal)

That curiosity is further encouraged on entering the building. A concrete spiral walkway pulls you up into the building, with the multi-coloured slates or fins on one side, a concrete wall on the other. There is a sense of anticipation on arriving at the second floor, which is amply satisfied when you enter the double-volume 177m² gallery space. Perhaps it’s something to do with the tall walls, or perhaps it’s just the impressive artworks on display. Or perhaps it’s almost a womb-like experience, and therefore intrinsically natural and comfortable. 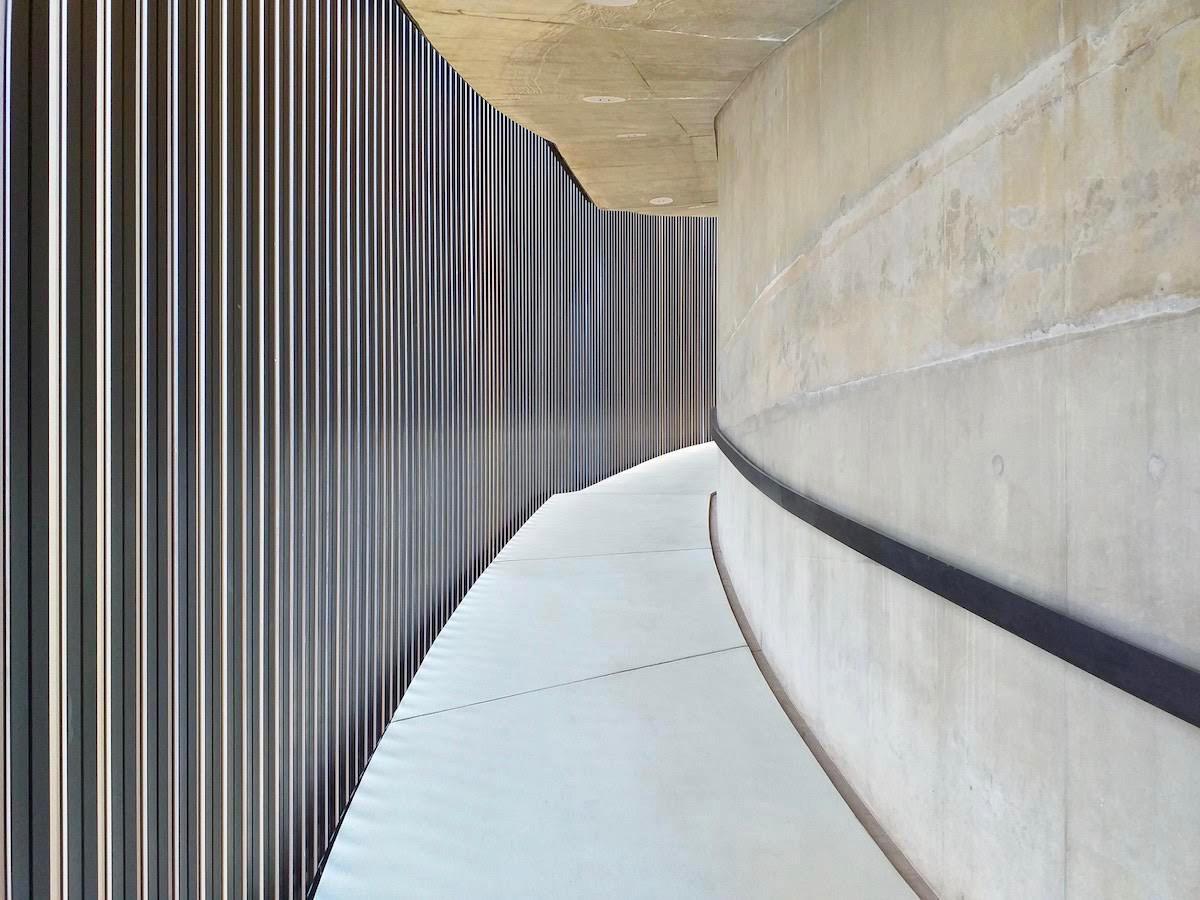 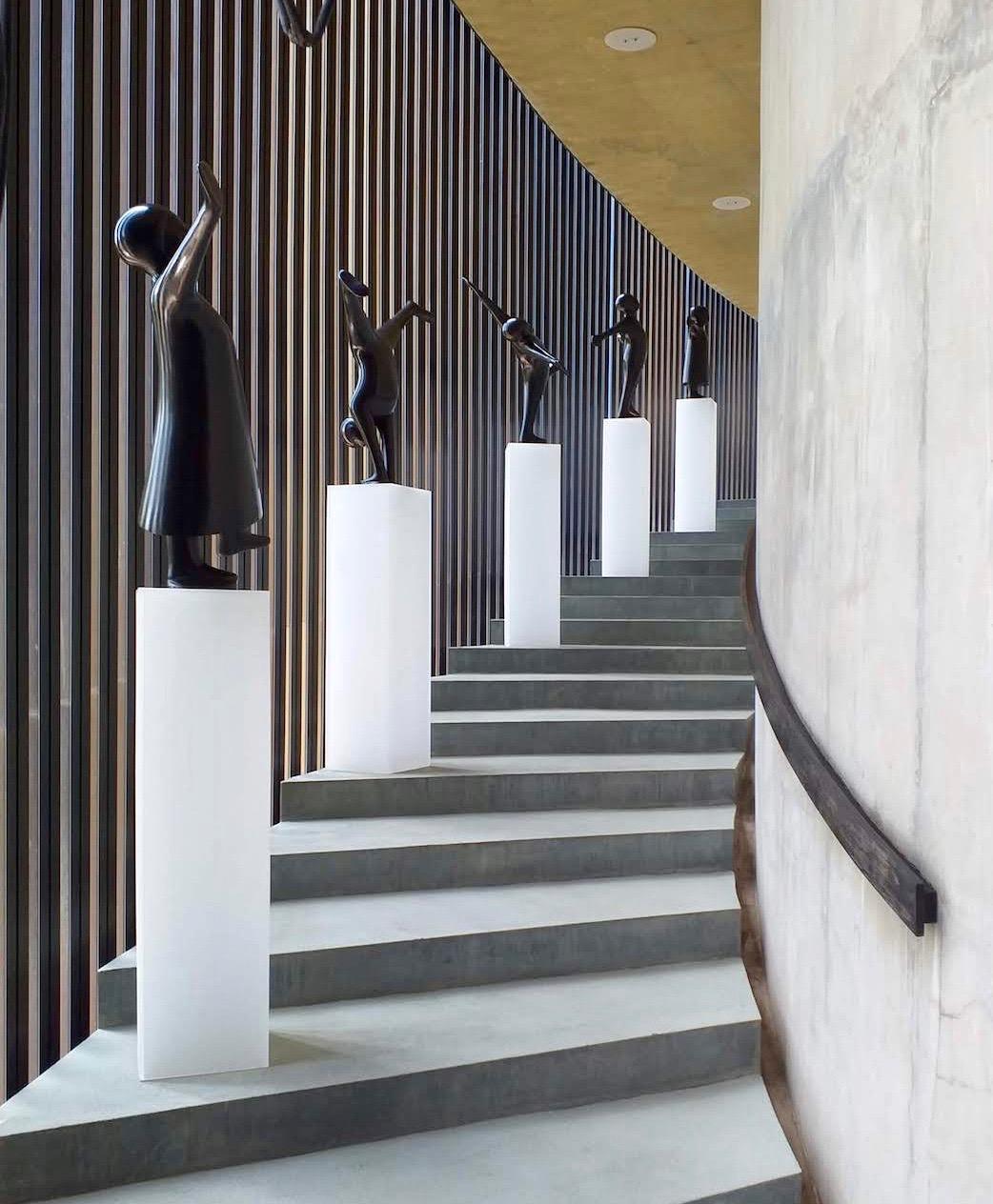 The next level up (The Heritage Portal) 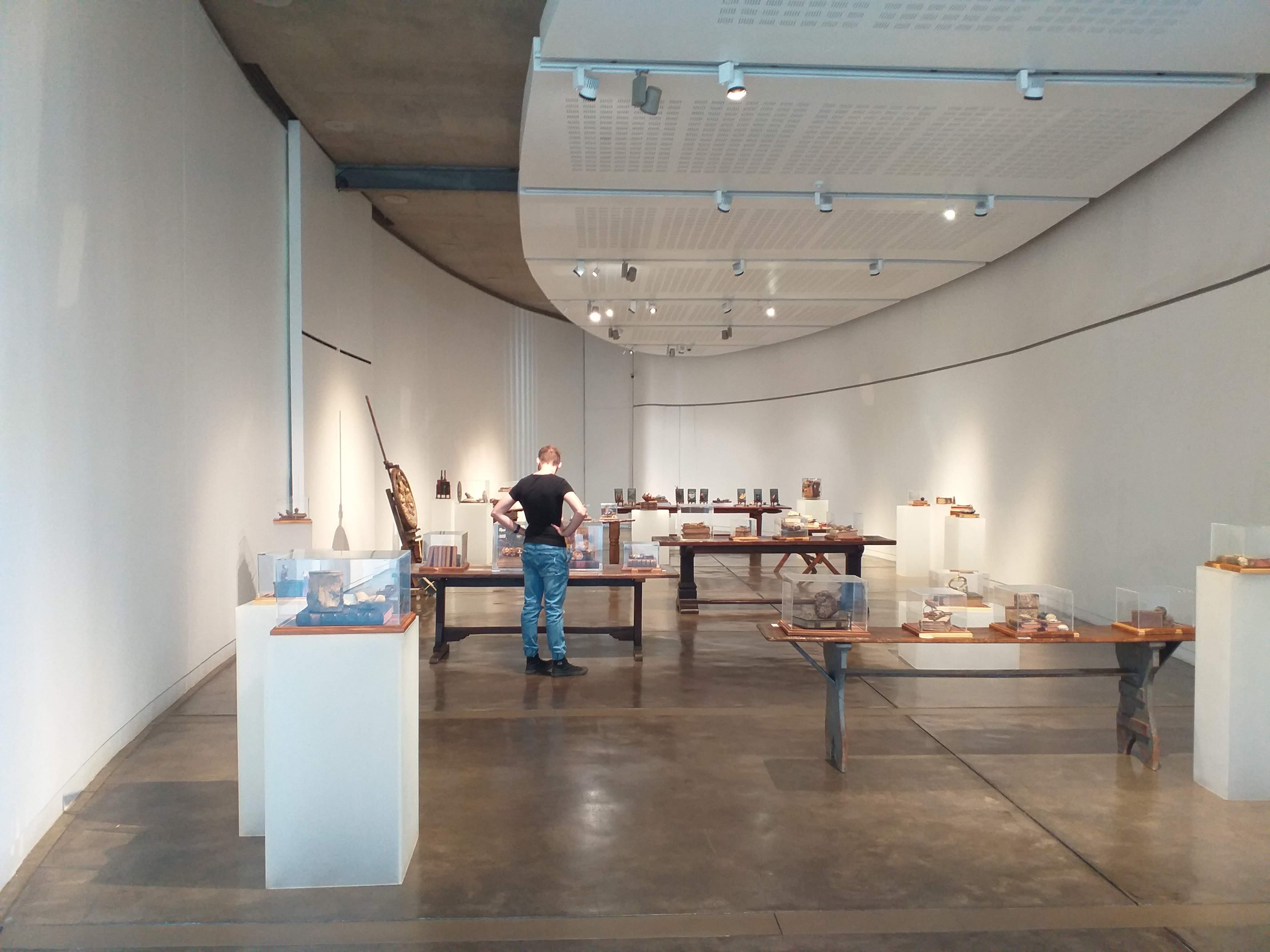 The owners of the building are Mark and Christine Read, also owners of the enduring Everard Read Gallery across the road, which traces its history back 97 years, to 1912.

Mark Read says that the idea for Circa on Jellicoe goes back to the late 1980s, when the land was originally purchased. Describing the new building as an “architectural gift to Johannesburg”, he had intended Circa as an extension of the older gallery, a post-modern structure adjoining a house.

“The new building presented a once-in-a-lifetime opportunity to venture into new territory without damaging in any way the integrity of Everard Read,” he explains. “With the new space, top contemporary artists could show vast work in its cavernous interior.”

Two of those top contemporary artists - Willem Boshoff and Karel Nel - have been chosen to open the gallery. The exhibition, entitled Penelope and the Cosmos, opened on 7 November, and runs until 15 December.

The architects of this amazing structure are Pierre Swanepoel and his team at StudioMAS Architecture and Urban Design. 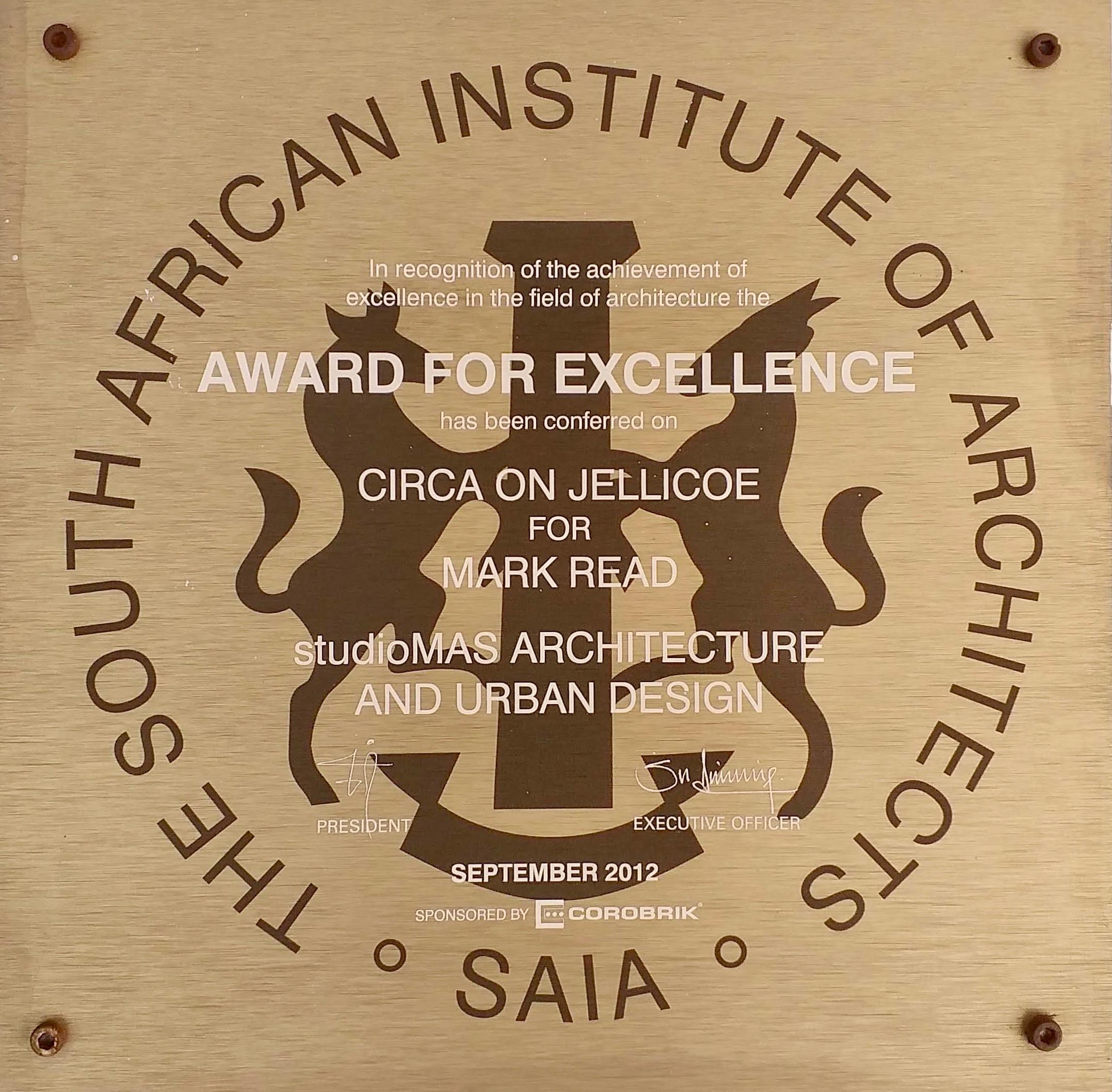 Swanepoel describes it as “the next iconic building in our portfolio”, and he’s certainly got a lot to brag about. Structures his firm have created in the last few years – both residential and public - have added richly to the country’s wealth of architecturally exciting buildings.

Public structures include Kliptown Square in Johannesburg, the Biovac Building and Claremont Central in Cape Town, and the NICD Laboratory in Joburg. Private dwellings include houses like Westcliff Estate, the Infill House in Cape Town, and the Vaal River Pavilion. Most of his firm’s creations have received awards.

“The purpose is to create a building responsive to the art on show, offering something physical and real; something that alters perspectives of everyday life,” says Swanepoel of Circa.

He adds that the vision for the gallery is to become a “cherished city landmark in an impressive art precinct”. The building is very much part of the art. “The architecture is therefore a sculptural artwork, moulding itself around the art it contains.”

Inspiration for the tall slates came from the typical stick fences around Zulu kraals, and the “vertical elegance of reeds and grasses”. 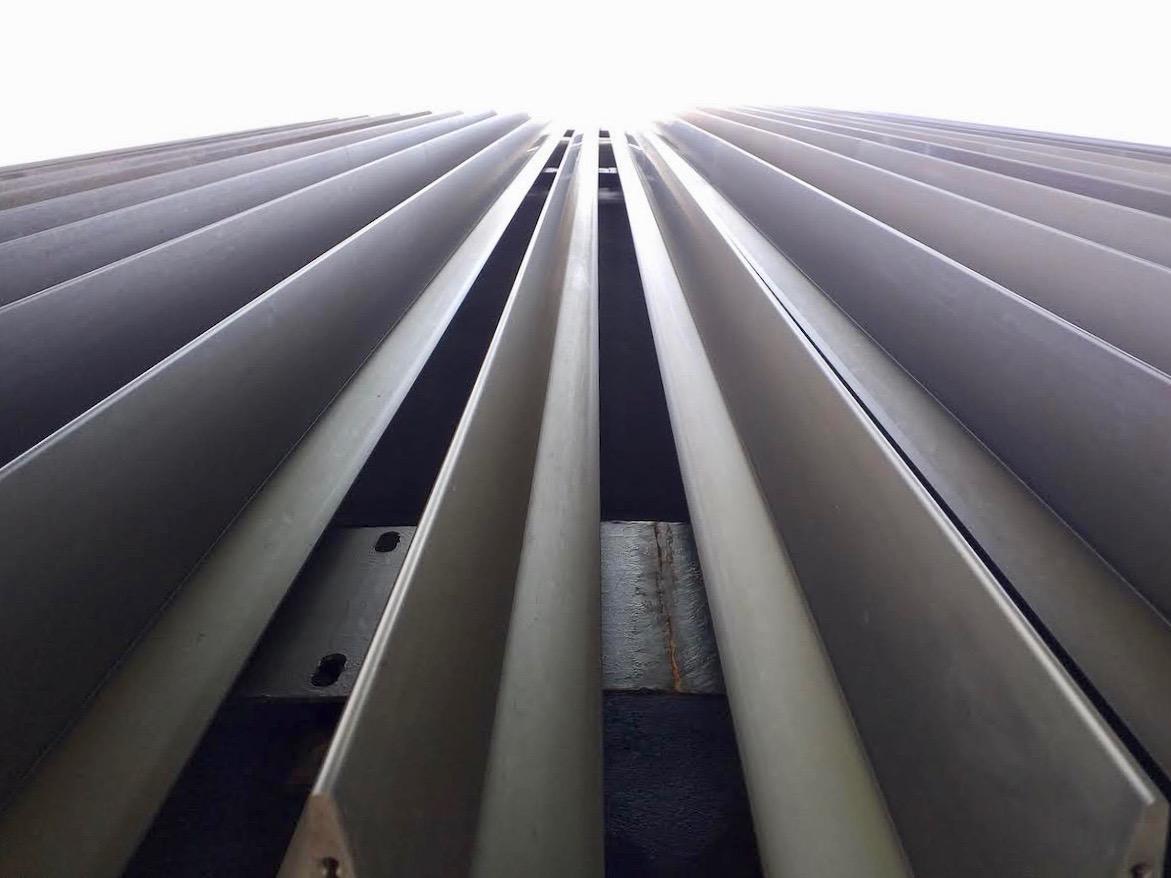 The tall slates from below (The Heritage Portal)

Acknowledging that the site, a small rectangular piece of land, was a challenge to design within, even for a conventionally shaped building, Swanepoel says: “It therefore creates a unique opportunity for some ingenuity and adaptive design.”

The perfect ellipse or elongated circle of the building appears made for the awkward site.

“Circa would not look the same were it to be built somewhere else. Partly in response to rational limits, a large part of the design of Circa stems from intuition, complimented by common sense. As its name suggests, it is not specific or defined, it is Circa,” elaborates Swanepoel.

It’s the uncertainty or approximation in the name that particularly excites Read. “One could say it’s neither here nor there, but rather free to travel in space and time, not hindered by any preconceived template. What better name for it than CIRCA,” he says. 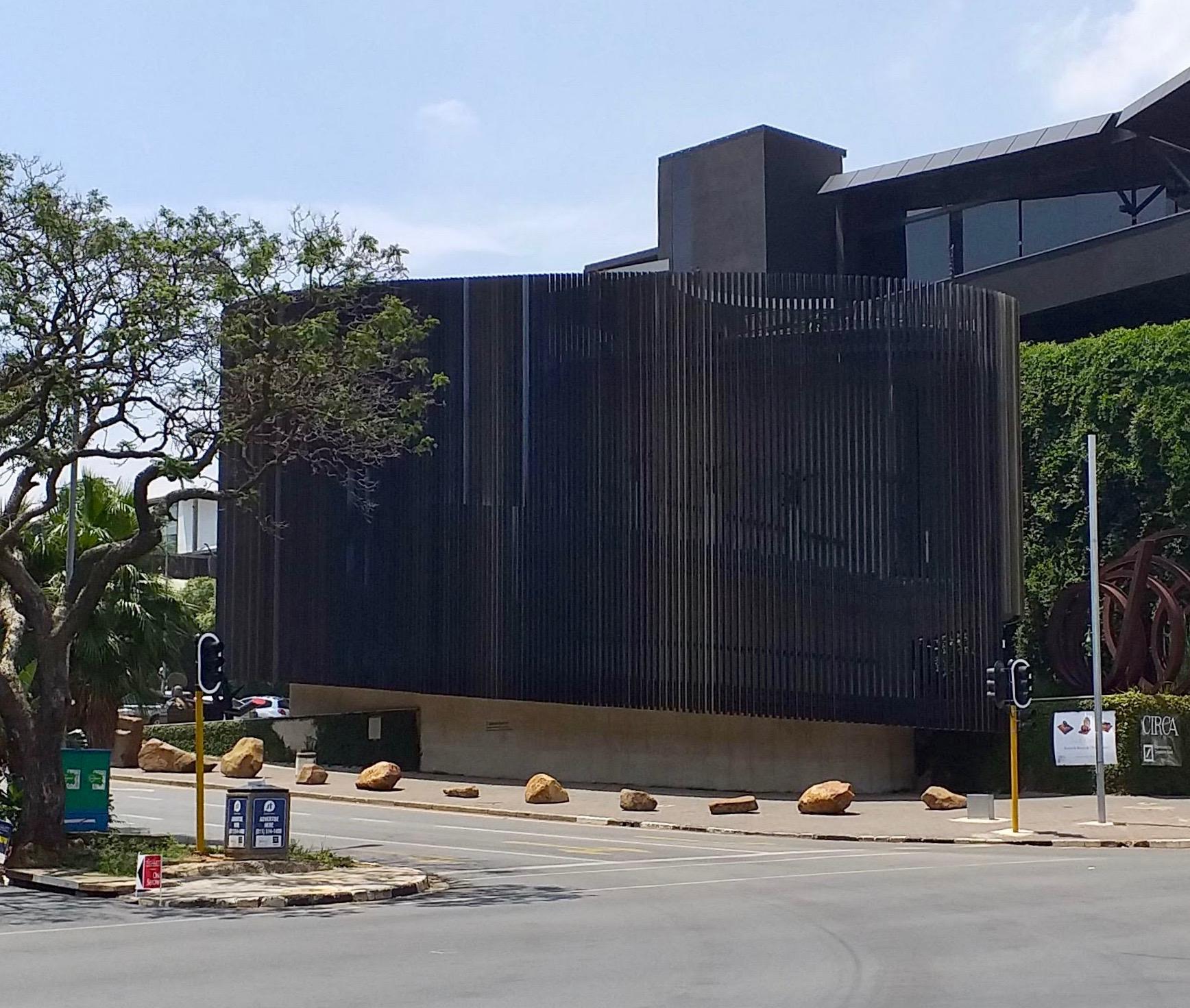 Circa (The Heritage Portal)

Not a conventional gallery

He indicates that it’s not going to be a conventional art gallery, showcasing just art. He plans to show fossils; or exhibit new green technologies and South Africa’s biodiversity; or treasures like a piece of moon that journeyed back with the Apollo 16 in April 1972; or a rare Coelecanth specimen. He envisages lectures on a variety of subjects, including music, theatre and dance.

Of course a range of topics are already being discussed on the top floor of the building, in the Darwin Room, a spacious, elegant room, with adjoining deck offering views over Jan Smuts Avenue and the leafy surrounding suburbs. It is a space that is available for conference hire. 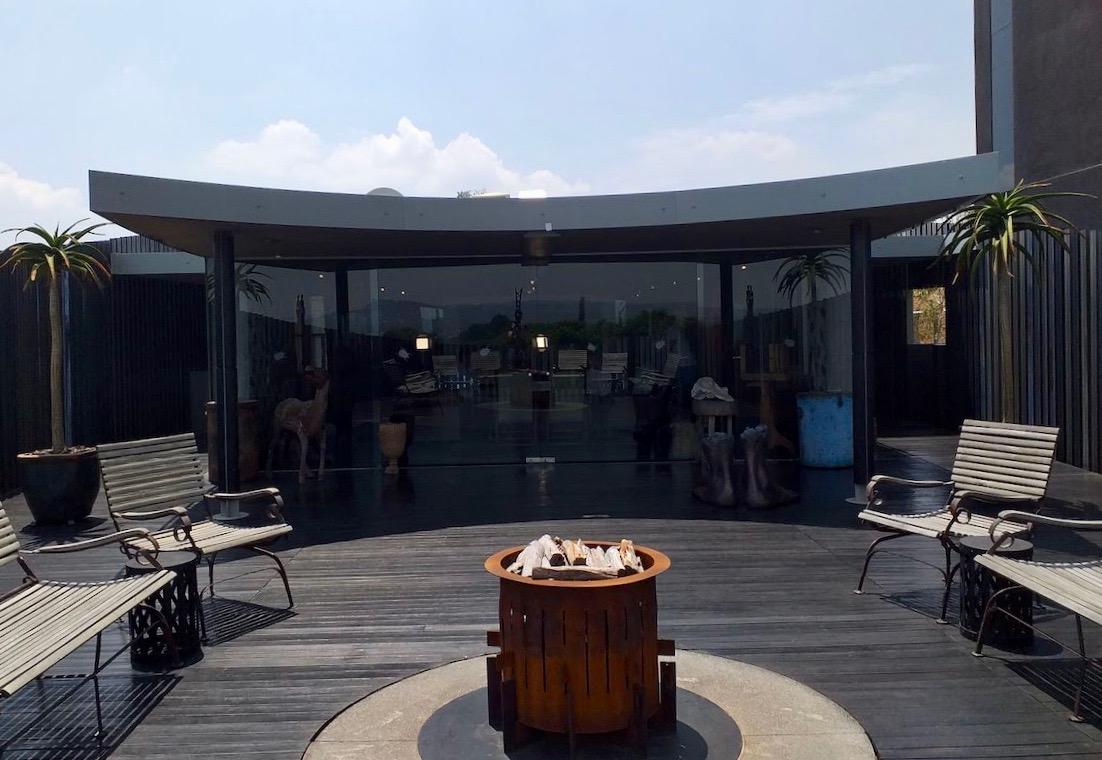 Deck and Darwin Room at Circa (The Heritage Portal) 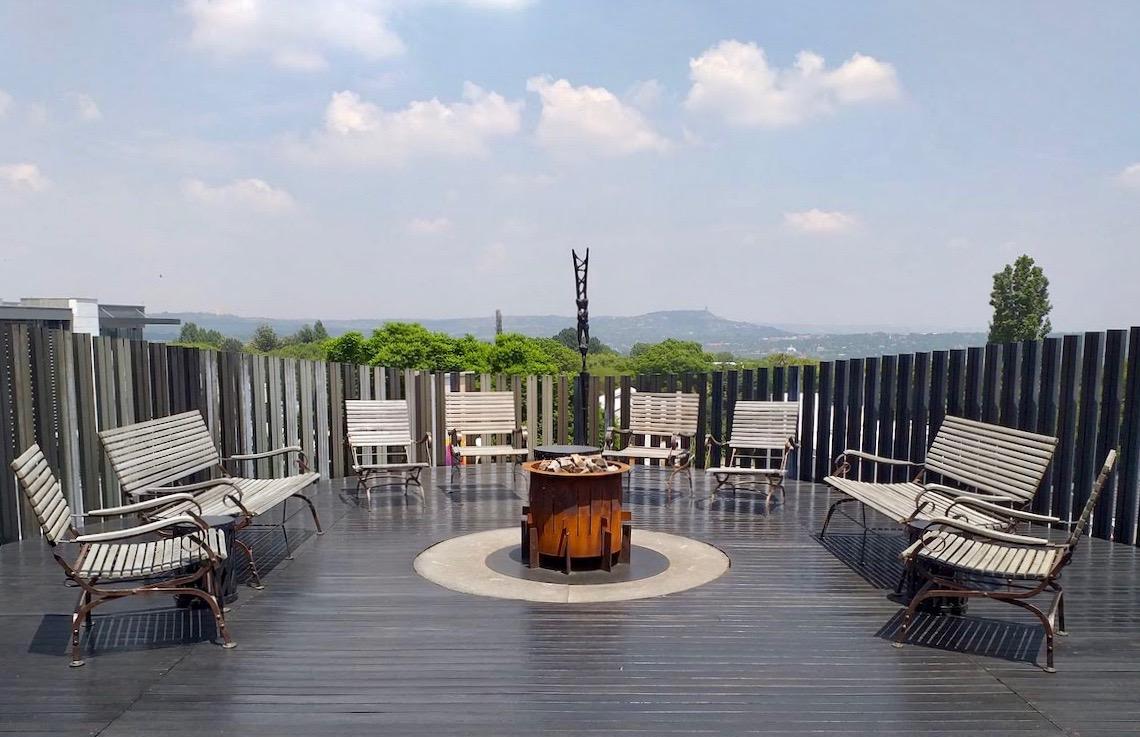 The deck with magnificent view (The Heritage Portal)

The fire escape from the top floor is a metal staircase divorced from the building, but reached via a walkway. It allows for creepers to be grown up its tall walls. “It emphasises the importance of encouraging conditions for nature to develop in harmony with man-made things,” says Swanepoel. 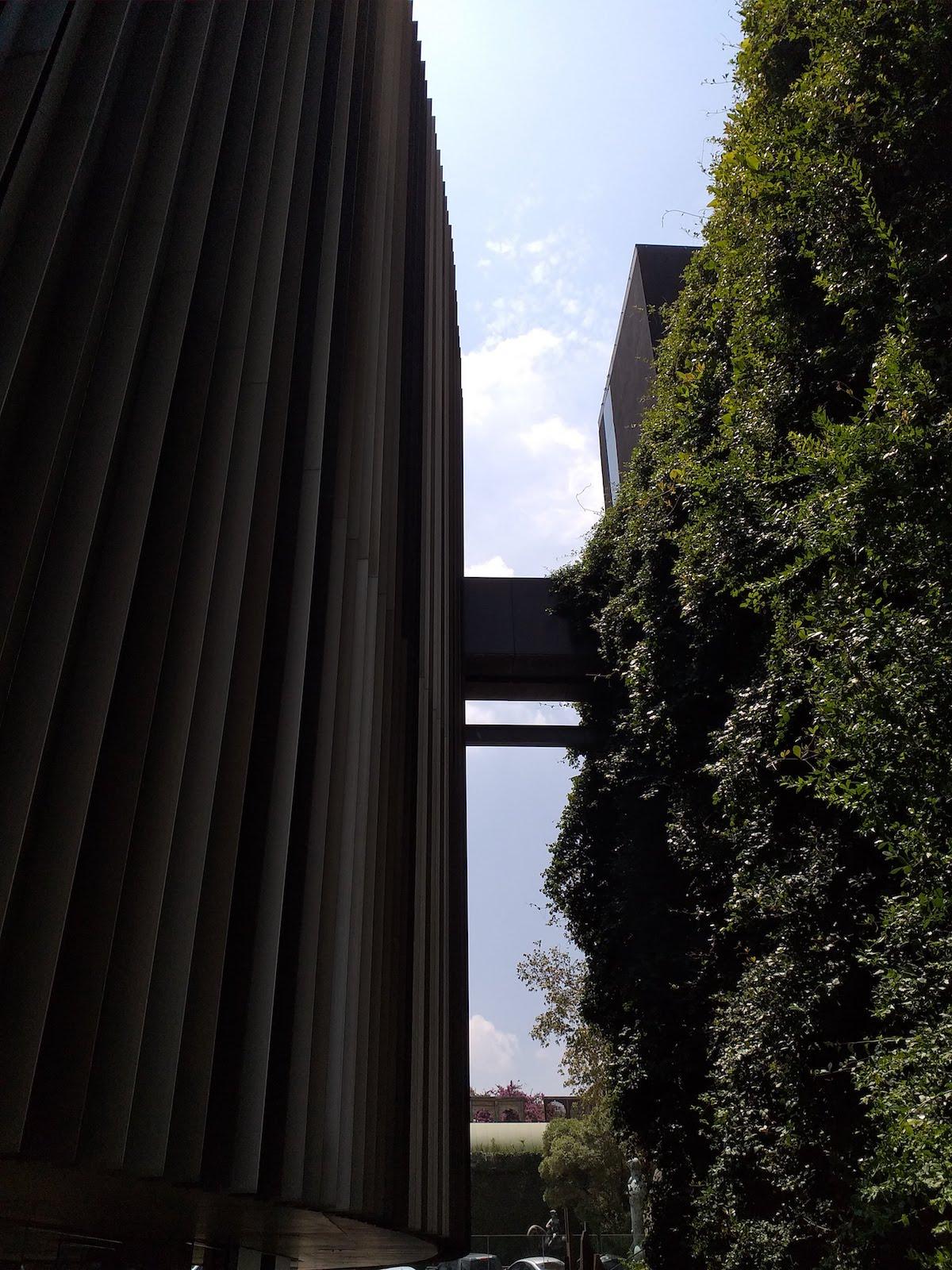 The fire escape is reached via a walkway (The Heritage Portal)

The ground floor is called Speke, some 106m² of gallery space available for “craft curiosities”, with seven movable display screens that can be lowered from the gallery above, extending the display area, or when lifted, opening up the Speke area. Speke is named after John Speke, a British army officer and explorer who journeyed through central Africa. He gave Lake Victoria its name, and correctly identified it as the source of the Nile

The gallery is eco-friendly. Electricity is produced by means of solar voltaic panels. Rain water is harvested and used for everything except drinking water. And solar-heated water will be used for heating the gallery.

“Circa promotes the seemingly forgotten concept of designing an inviting building with ‘good manners’; one that does not resort to perimeter fencing or a 3m high wall,” concludes Swanepoel. 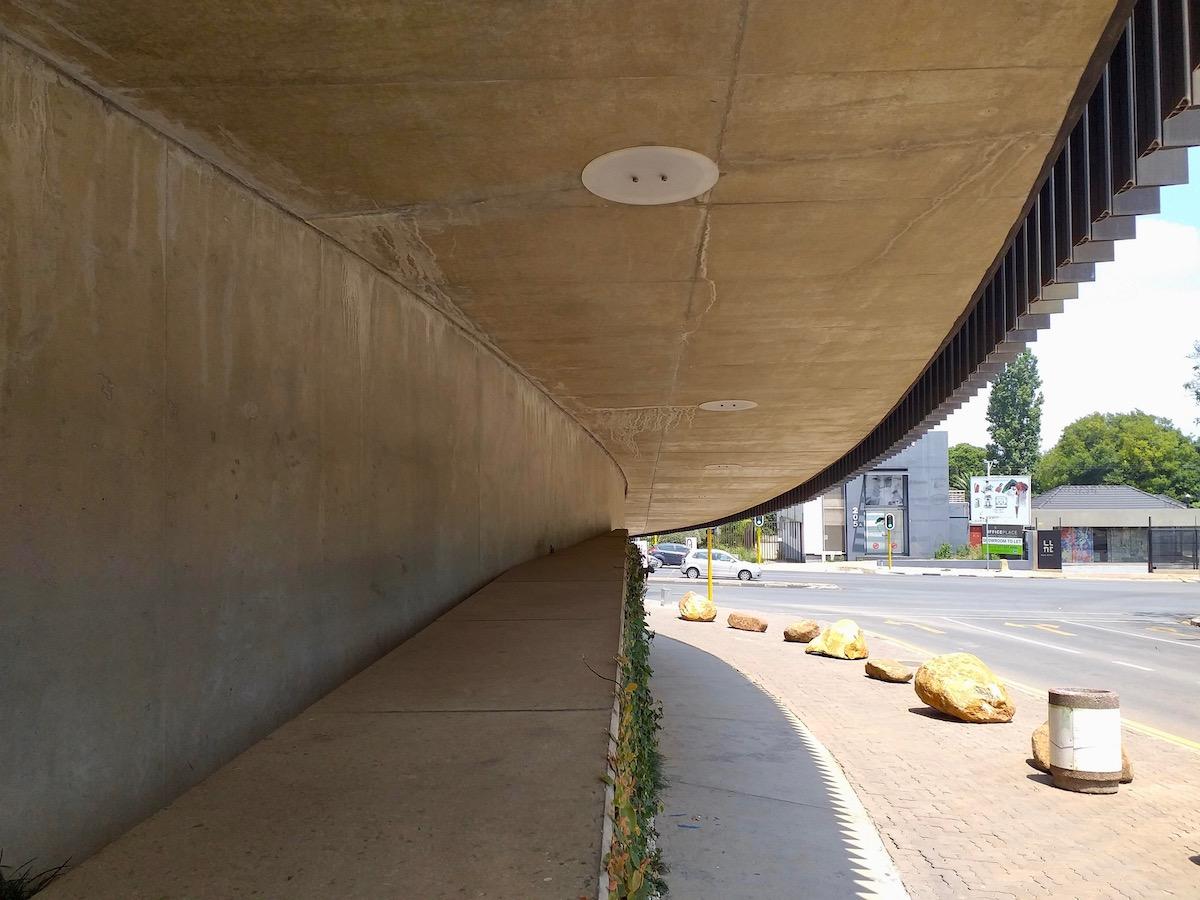 An inviting building with good manners (The Heritage Portal)

And then there’s the art to savour.