George Rex - Remarkable but not Royal

In this article, first published in 1976, Patricia Storrar does a masterly job debunking the myth that George Rex, the founder of Knysna, was the illegitimate son of King George III. She also reveals fascinating biographical information on Rex and provides details of the spaces and places associated with him. The article was published in Restorica, the old journal of the Simon van der Stel Foundation (today the Heritage Association of South Africa). Thank you to the Univerity of Pretoria (copyright holders) for giving us permission to publish.

It is sad that there should be in South Africa today so few material reminders of the remarkable George Rex, one-time marshal of the court of vice-admiralty in Cape Town and for 35 years grand seigneur of the straggling little huddle of houses which was later to grow into the town of Knysna. It is even, considering the wealth of rumour, legend and speculation which has flourished round Rex's name for nearly a century and a half, a little strange. 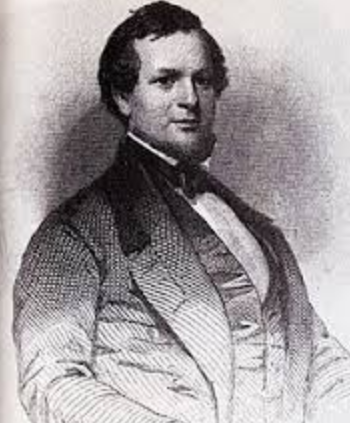 A petrol station today plies its trade at No 17 Prince Street, Gardens, Cape Town, where once George Rex's handsome house, Schoonder Zigt, stood in its famous gardens. Melkhout Kraal, his even finer estate on the east bank of the Knysna lagoon, has virtually vanished without trace. Only with the help of a diagram which Rex drew up for insurance purposes and which gives the exact dimensions of the buildings, is it possible to trace the outlines of the main house in the raised mounds which are all that is left of the crumbled foundations. Industrial buildings have crept up to within 30 metres of the spot where he once welcomed his guests at the front door of Melkhout Kraal and Escom power pylons tower even closer to his grave, which lies in what were his once beautiful grounds. 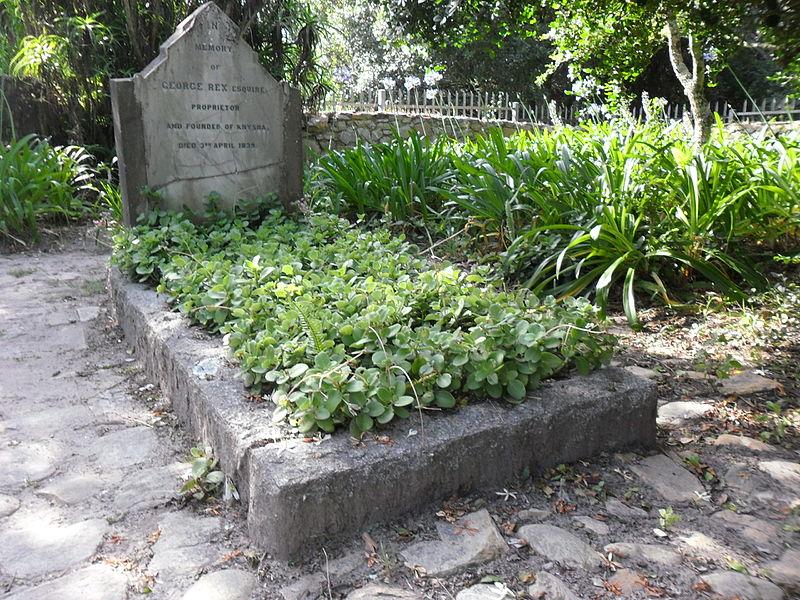 The slipway on the upper reaches of the Knysna lagoon, where in 1826 Rex laid the keel of his brig, The Knysna, has been proclaimed an historical monument and a granite monolith bearing a plaque marks the spot. Here the overhanging bushes have recently been cleared round the monolith itself, but the spot is still difficult to find. Belvidere House, on the west bank of the Knysna lagoon, is the only building extant in any way connected with the founder of Knysna (having been built in his lifetime by one of his sons-in-law) but even that is now up for sale and it is by no means certain that it will be preserved.

The origins of the enigmatic George Rex, popularly supposed for almost a century and a half to have been the illegitimate son of King George III of Britain and a fair Quaker girl, Hannah Lightfoot, have at last been firmly established, thanks to the expertise of Professor Ian R Christie, Head of the Department of History at University College, London. All he had to go on was the fact that Rex had been a proctor of Doctors' Commons, London, that he had been appointed marshal and sergeant-at-mace of the vice-admiralty court, Cape of Good Hope, in 1797 and that he had a much-loved sister, Sarah Rex, who died at her home in Bath in 1842. The will of this Sarah Rex (who is acknowledged by all investigators, including Sanni Metelerkamp8, to have been George's sister) had already been examined and the fact noted that in it the children of George Rex were named among others as legatees.

Professor Christie used this will of Sarah Rex as a starting point in his investigations. In it are mentioned various freehold and leasehold properties which were to be sold and the proceeds divided among various legatees; the sum of £1 000 was to be a bequest "to my nephews and nieces, the children of my late brother, George Rex, of the Cape of Good Hope ... "

The second vital link in the chain of evidence leading to the establishment of Rex's genealogy was a document found in the records of the Manor of West Ham Burnells in Essex and this records the sale of Sarah's lands in terms of her will. Certain copyhold lands, "all those three acres and three roods of land situate, lying and being in Bromley Brook in the parish of West Ham ... formerly in the tenure of John Warren ... " are described in detail. It is these copyhold lands which provide the key to the long-standing puzzle, "Who was George Rex?

The third important document constituting a confirmatory link in the chain is the claim, made on 20 April 1765 by one John Rex, a distiller of Goodmans' Fields, Whitechapel, to his right to take possession of certain copyhold lands left to him in terms of his maternal grandfather's will. These lands are described as "all those three acres and three roods of land lying in Bromley Brook in the parish of West Ham ... now in the tenure of John Warren". The similarity of the wording between this paragraph and that quoted from the will of Sarah
Rex, furnishes proof that this was one and the same parcel of lands. The next document to be examined lays bare the relationship which entitled Sarah Rex, spinster, to inherit the lands which John Rex inherited from his grandfather.

The spotlight now turned on the will of John Rex (George's father), who is shown in the London merchant directories of the seventeen-seventies in business as a distiller at 87 High Street, Whitechapel. This will mentions two lots of land in Plaistow Marsh "in the parish of West Ham in the county of Essex ... " which were clearly the same copyhold lands as those already proved to have been held by Sarah Rex. One interesting clause in John Rex's will reads: "In regard I have already advanced my eldest son George Rex considerably more than I have my other son and daughter, therefore from and immediately after the decease of my said wife, I give and devise the said freehold and copyhold lands ... unto my daughter Sarah Rex and to the heirs of her body lawfully begotten ... "

What more conclusive evidence could one find of George Rex's rightful lineage than the passing down of this parcel of lands through more than four generations: from John Rex's maternal grandfather to his eldest daughter's eldest son; from John Rex to his daughter, Sarah, in succession to his wife and, when Sarah died, the bequest to her nephews and nieces in South Africa from the sale of these same lands. In fact, had George not predeceased his sister he would have inherited these lands, because his younger brother, John, (also mentioned in the father's will) had died long before either of them.

It seems hardly necessary, after so neat a piece of detective work, to supply further evidence of George Rex having been the eldest son of John Rex of Whitechapel and his wife, but further evidence there is in plenty. In the register of christenings of St Mary's Church, Whitechapel, the christenings of George, John and Sarah, children of John and Sarah Rex, as well as of two other daughters who must have died young, as they are not mentioned in the father's will, are recorded.

According to this register George Rex was baptised on 2 September 1765 and the fact that he was born in August 1765 is confirmed by the information entered on his death certificate on 3 April 1839 that his age at the time of death was "73 years and 8 months". The birthdate of his sister, Sarah, who was baptised on 29 June 1770, corresponds exactly with the age given in her obituary notice when she died in Bath in August 1842.

The three children who survived in the family, George, John and Sarah, have now been firmly identified. The combined evidence of the four documents points overwhelmingly to the conclusion that George Rex was born the eldest son of Mr and Mrs John Rex of Whitechapel, London.

Although Rex was not royal he was nonetheless remarkable. Two further documents discovered in London in 1973 enabled the present writer to establish that he worked in Doctors' Commons for a total of 17 years - first as a clerk, then a notary and finally a proctor. He received the appointment of marshal and sergeant-at-mace when the vice-admiralty court was established at the Cape and held this position until the court was dissolved preparatory to the withdrawal of the British in 1803. In 1804 he settled at Knysna, where he built up his estate, Melkhout Kraal (bought reasonably in a deceased estate) to become a centre of gracious hospitality.

Reproduction of a water-colour of Melkhout Kraal painted by Major A C Gregory on 29 October 1834 - Oppenheimer Collection - Restorica 1976.png 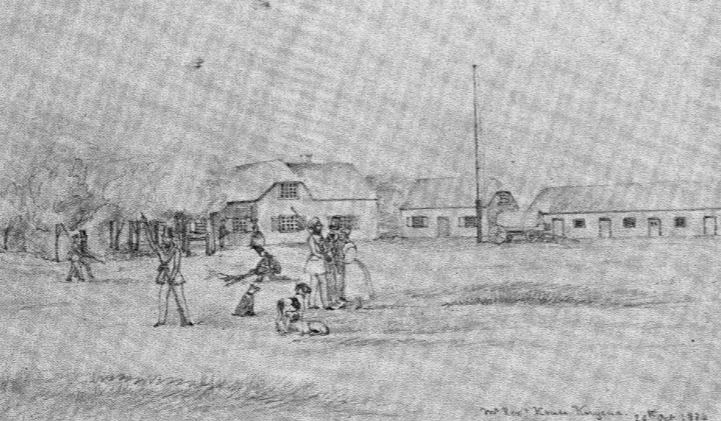 He acquired other quitrent farms at low cost and from 1830 onwards owned roughly 10 000 hectares in a great U surrounding the Knysna basin. Largely through his persistent efforts the Knysna lagoon was opened to shipping in 1817 and, having been laird of the little village and built up a considerable trade in timber there, he in effect founded the town of Knysna.

One achievement erroneously attributed to him recently was the building of Belvidere House. This was actually built by Rex's son-in-law, Thomas Henry Duthie, who married Rex's third daughter, Caroline, in 1833. George Rex did engage labourers for them during their absence overseas on a prolonged honeymoon and mustered building materials in readiness for their return, but did not build the house. Thomas and Caroline Duthie moved into Belvidere House on 10 April 1835 and it was occupied in an unbroken line by their descendants until 1974. Now, thanks to an unusual clause in the will of the last direct descendant, it must be sold. It is to be hoped that, partly because of its historic associations and partly because of the sheer beauty of the surroundings, this house will be preserved. What a fine museum it would make and how easily the buildings could be restored to house the relics of Knysna's past, including the relics of the father of Knysna, George Rex.