The Johannesburg Stock Exchange has had a remarkable six homes during its existence reflecting the massive growth of  Johannesburg, South Africa and the institution itself over a relatively short period of time. The streets where it has been located have become famous in financial circles around the world (think Simmonds, Hollard, Diagonal and now Gwen Lane). Whenever the Stock Exchange has moved, major banks and companies have followed creating new financial districts and leaving old ones to reinvent themselves. This has led some commentators to label the JSE fickle while others have argued that the institution has been quick to adapt to changing times. Wherever you stand in the debate, it is clear that the JSE has left its mark on the City of Gold.

The First Stock Exchange Building was completed in 1887, a year after the founding of Johannesburg. It was located on the corner of Simmonds and Commissioner Streets and became the hub of the young mining camp. A frenzy of trading occurred most days with people from all over the world trying to get their share of the wealth eminating from what would soon be recognised as the largest gold field on earth. 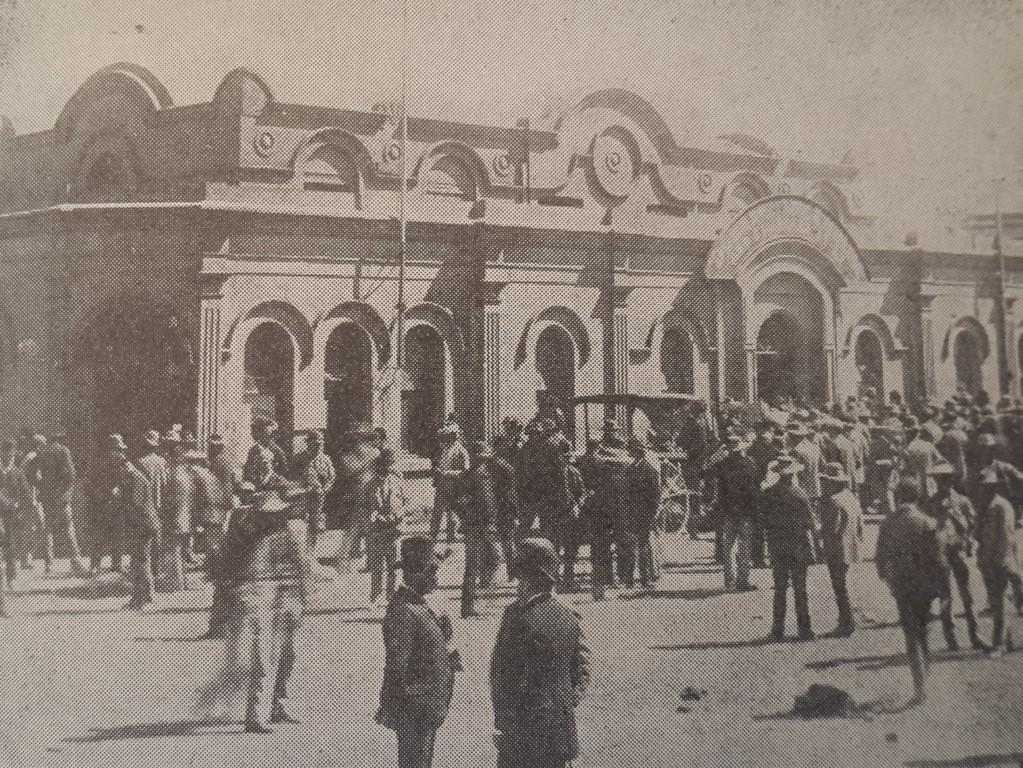 At the end of a working day investors and brokers would pour out onto the street to continue trading. Almost every book that looks at the early history of Johannesburg describes this famous scene. Brokers and mining company representatives appealed to the Mining Commissioner to block off Simmonds Street between Market and Commissioner Streets to create a private square. The appeal proved successful and the section was closed using chains hence the emergence of the iconic phrase 'Between the Chains'. Many world famous mining firms that shaped the growth of the industry were floated at this open air exchange. Alas if you visit the site today there is no commemoration of this wonderful piece of Johannesburg history. We hope this is remedied in the years ahead. 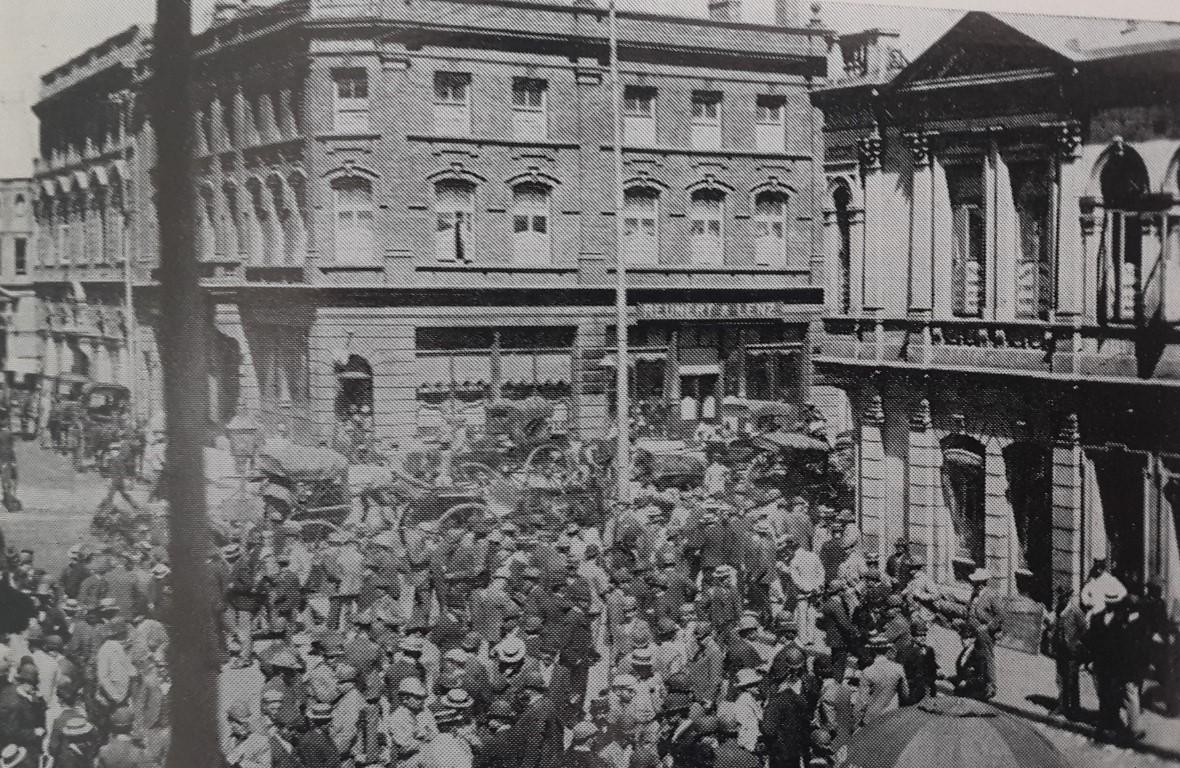 The Second Stock Exchange Building replaced the first within two years reflecting the rapid growth of the young mining town. The foundation stone was laid in November 1889 and the building was completed in 1890. It was designed by the firm Lennox Canning & Goad and had an impressive facade and large trading hall. Tough economic conditions hit Johannesburg in the early 1890s resulting in the eastern portion of the building only being completed in 1893. This section was designed by AH Reid.

A thriving financial district grew around the Stock Exchange with banks and mining firms wanting to be as close to the financial nerve centre of the town as possible. As mentioned in the introduction, this pattern has continued until today. 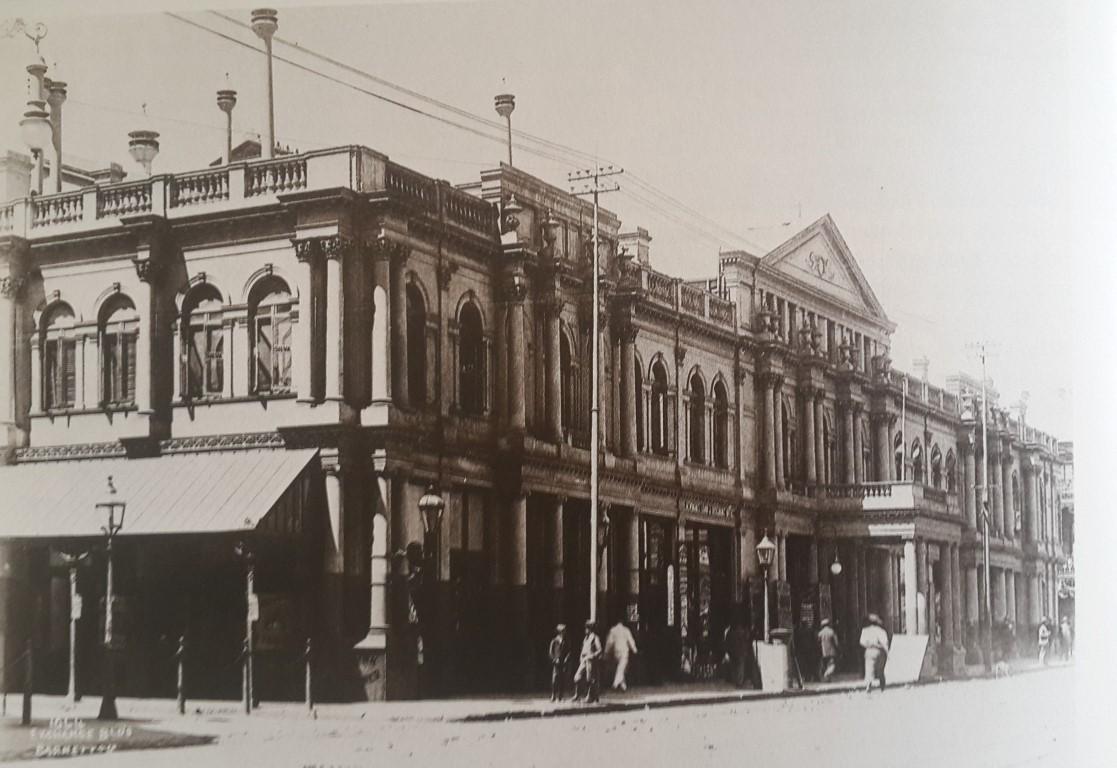 The Second Stock Exchange (From Mining Camp to Metropolis) 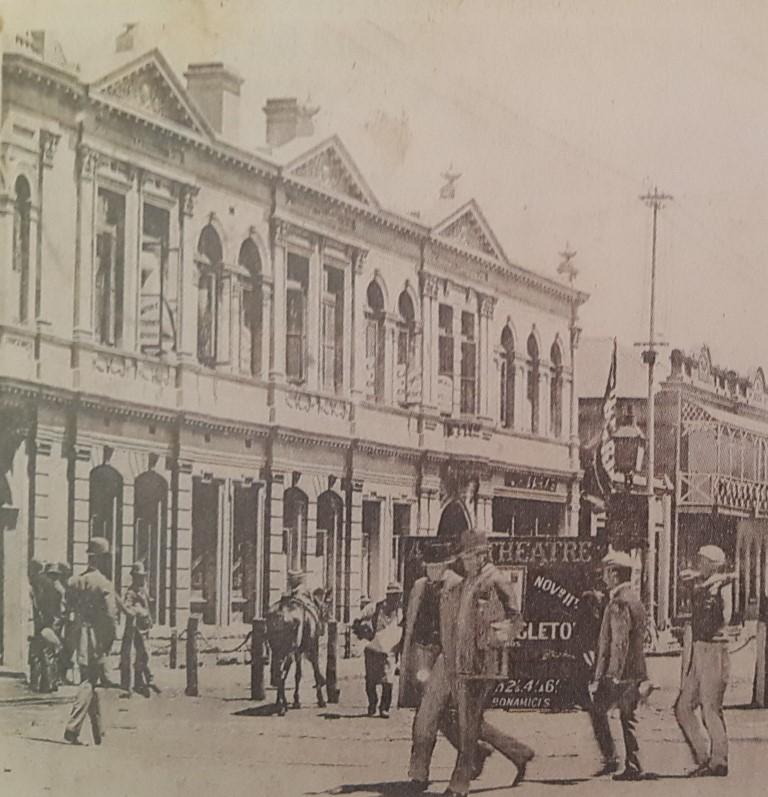 Another shot of the Second Stock Exchange Building. Note the chains. (A Johannesburg Album) 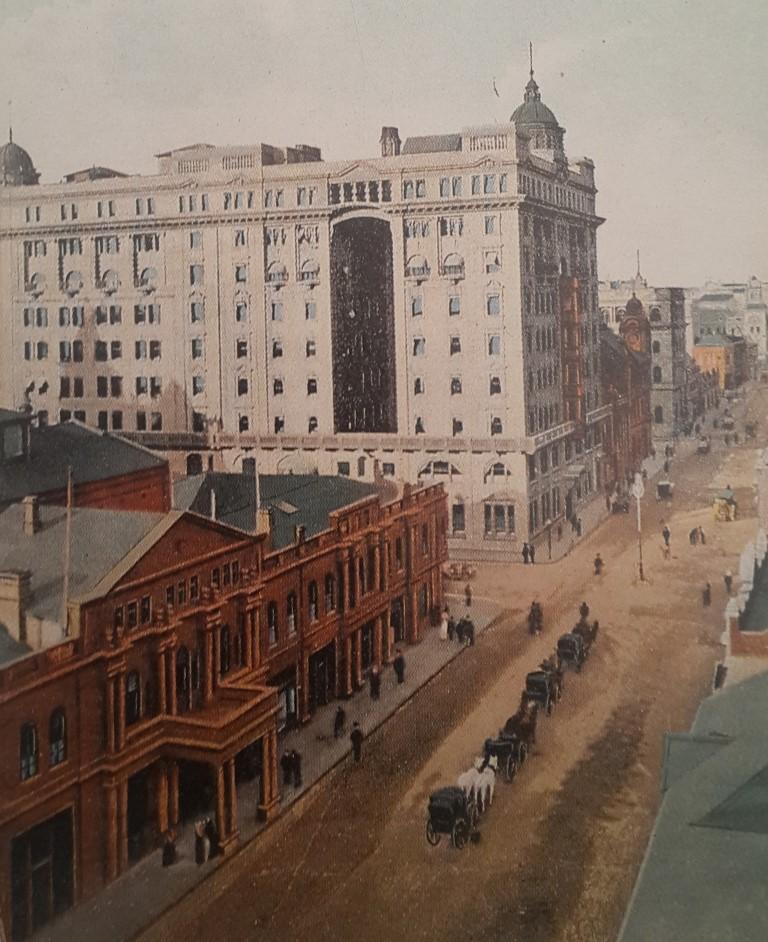 The Third Stock Exchange was completed in 1904 on a new site in Hollard Street. Once again the need for greater space and more modern features was the catalyst for the move. The building was designed by the famous firm Leck & Emley and included 210 offices and a two storey 28.3m by 22m main hall. The move sparked the shift of the financial district westwards with Hollard Street becoming 'the Wall Street of Johannesburg' for over seven decades before the JSE moved on again. The Third Stock Exchange was demolished in 1958 to make way for a new exchange on the same site. 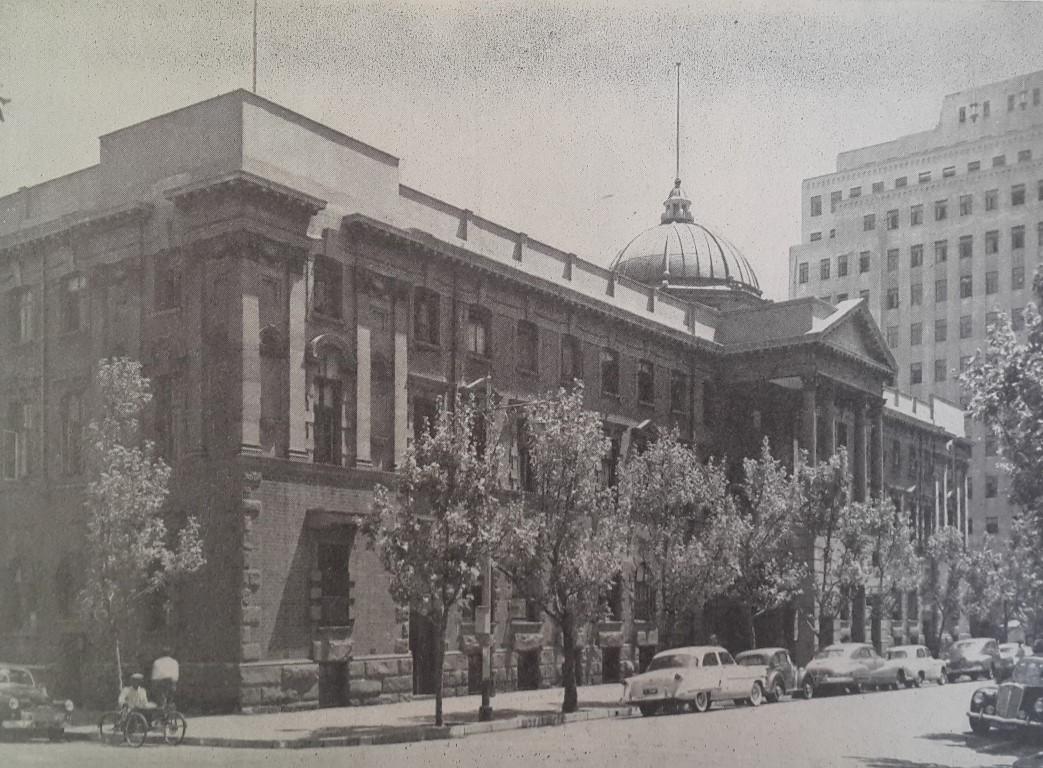 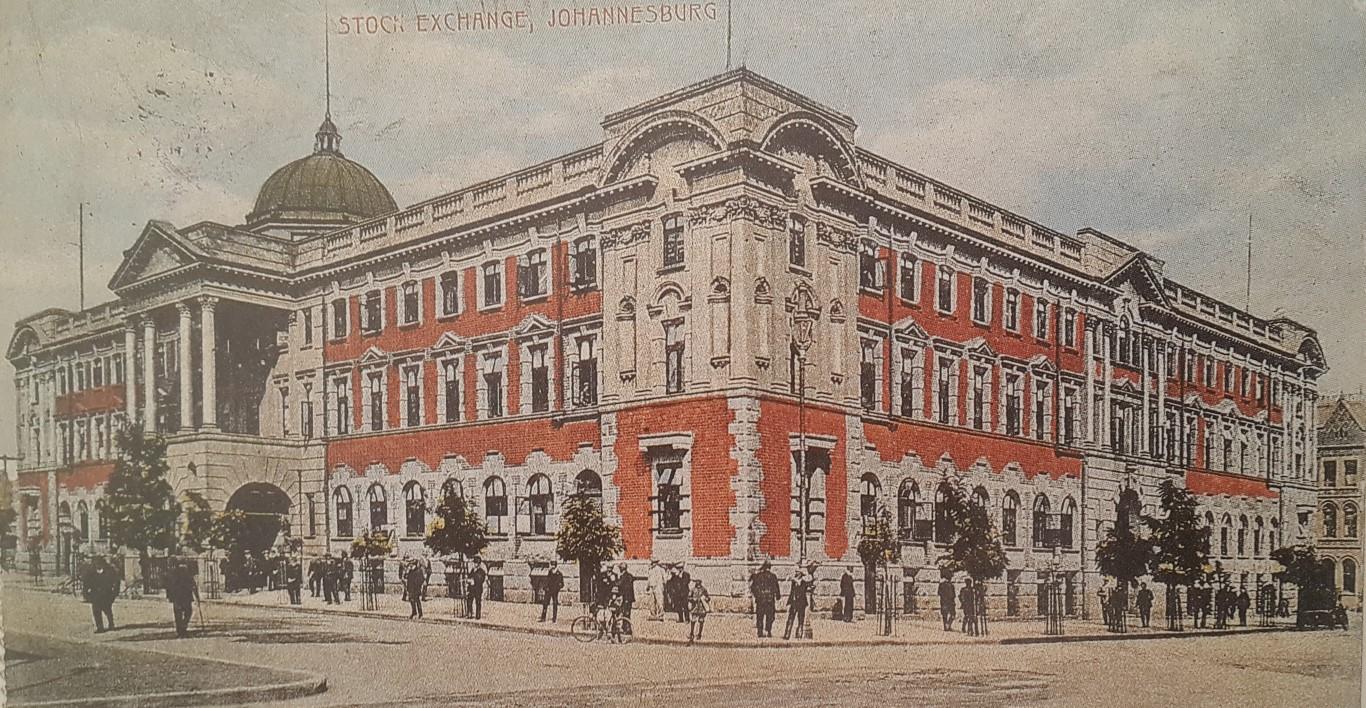 Another shot of the Third Stock Exchange Building (A Johannesburg Album) 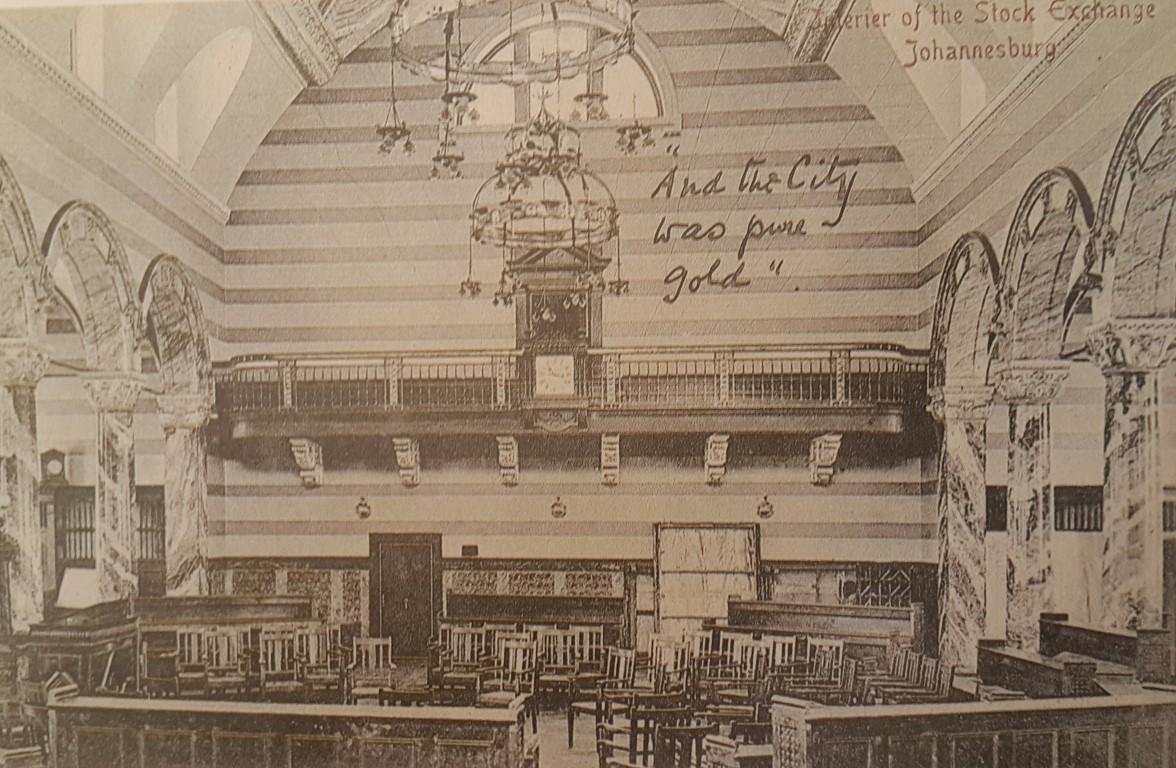 The Interior of the Third Stock Exchange Building (A Johannesburg Album) 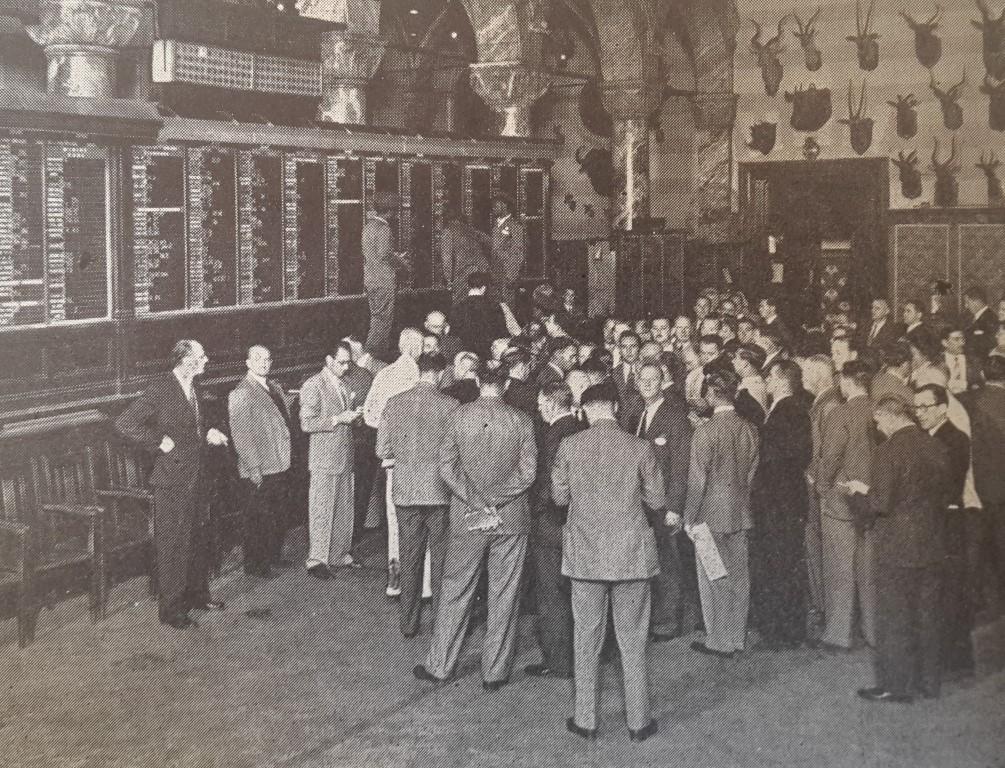 Another shot of the main trading hall (Fifty Golden Years)

The Fourth Stock Exchange Building emerged from the rubble of the Third and was completed in 1961. A powerful public relations exercise led to Presidents and Chairmen of famous stock exchanges including London, New York, Paris and Frankfurt being invited to the grand opening. The new building included a majestic trading floor located on the seventh floor (rising to the ninth), an exhibition hall, a committee dining room, a cinema projection room and plenty of office space. The JSE would call this building home for a brief 17 years before it moved to new premises in Diagonal Street. A board showing the closing share prices on 7 December 1978 is preserved in the lobby of the building today. 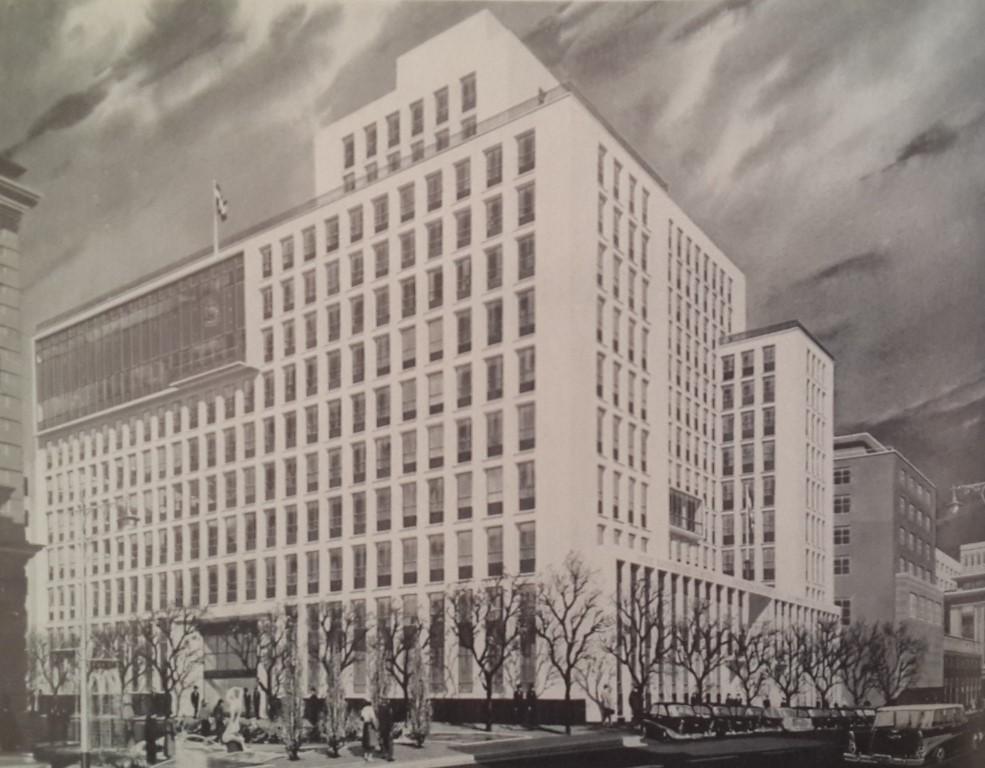 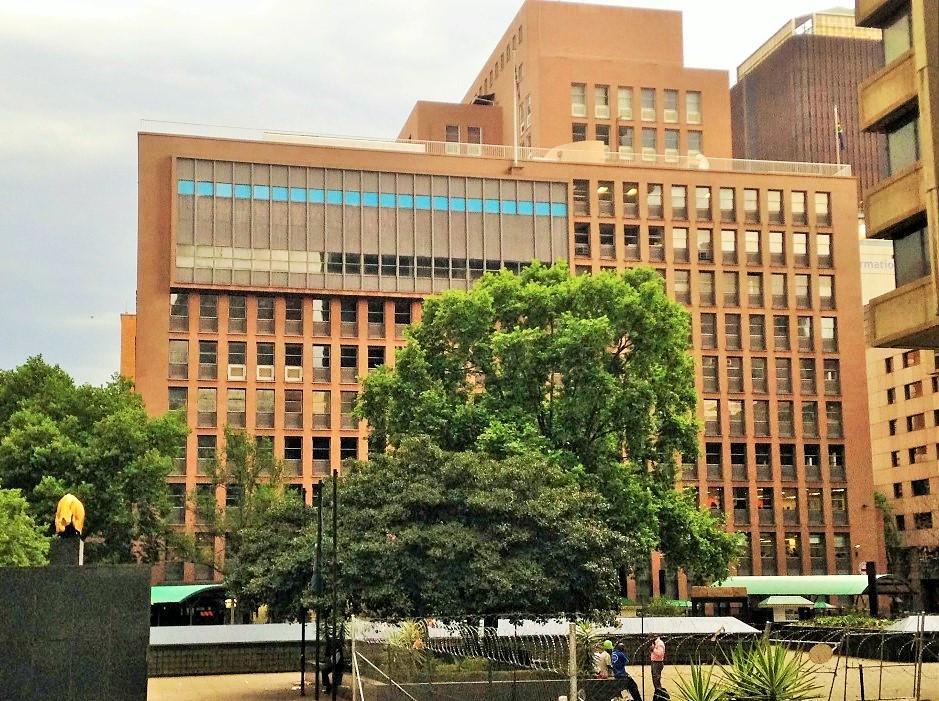 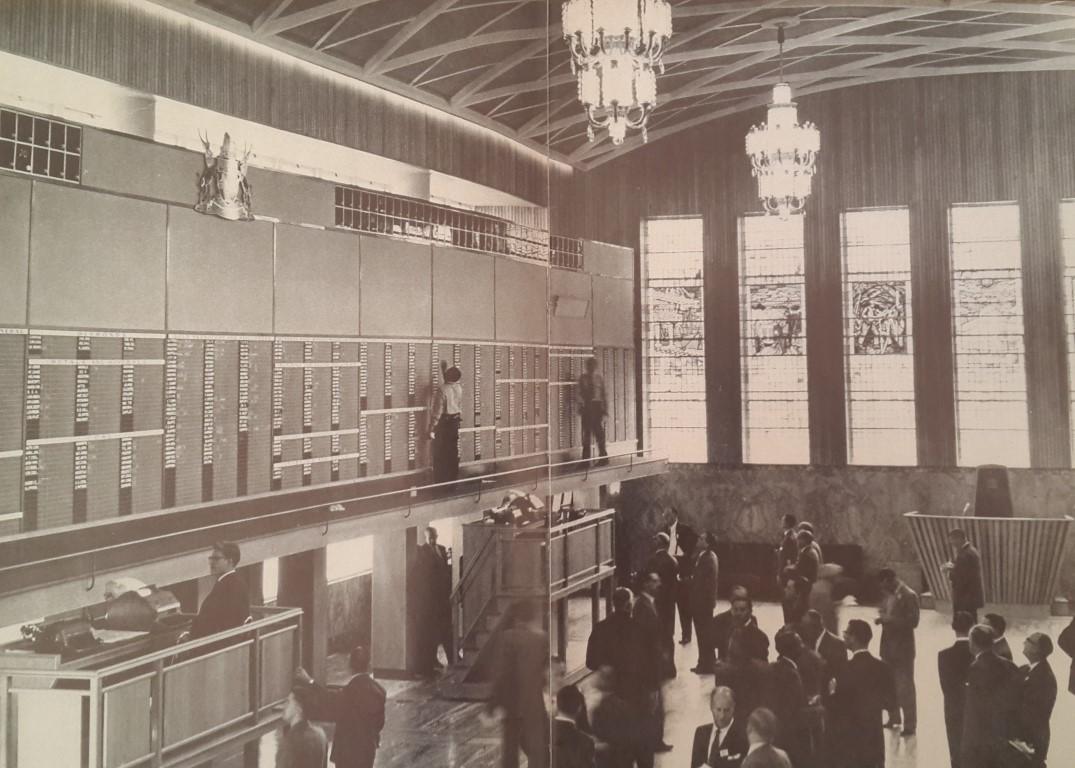 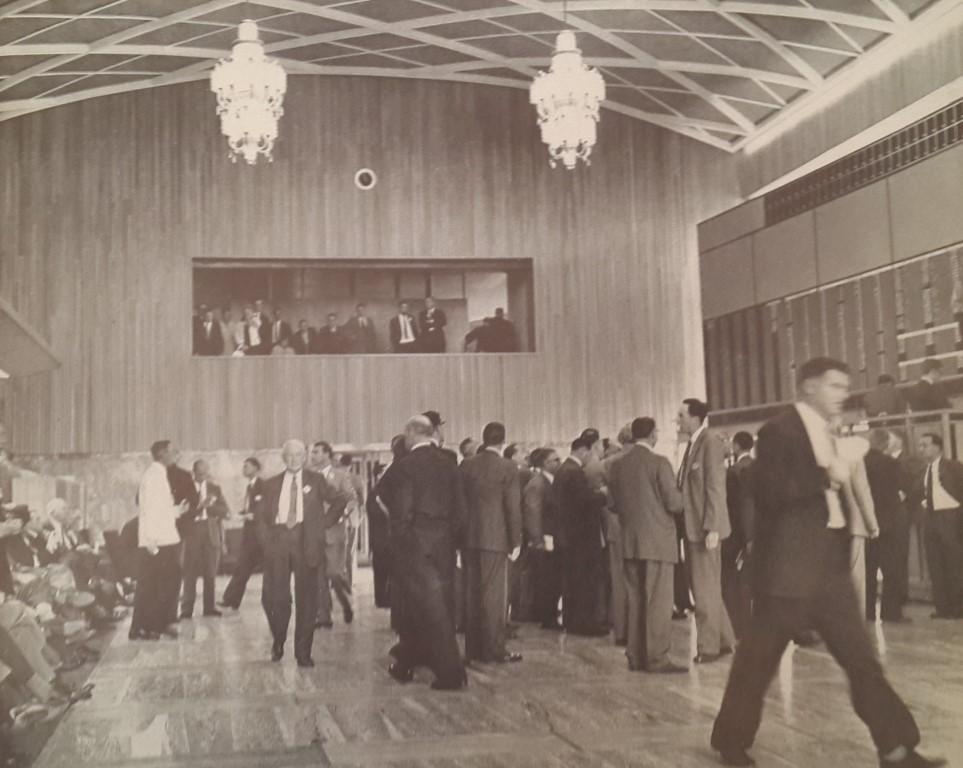 Another shot of the Trading Hall (South African Panorama, 1961) 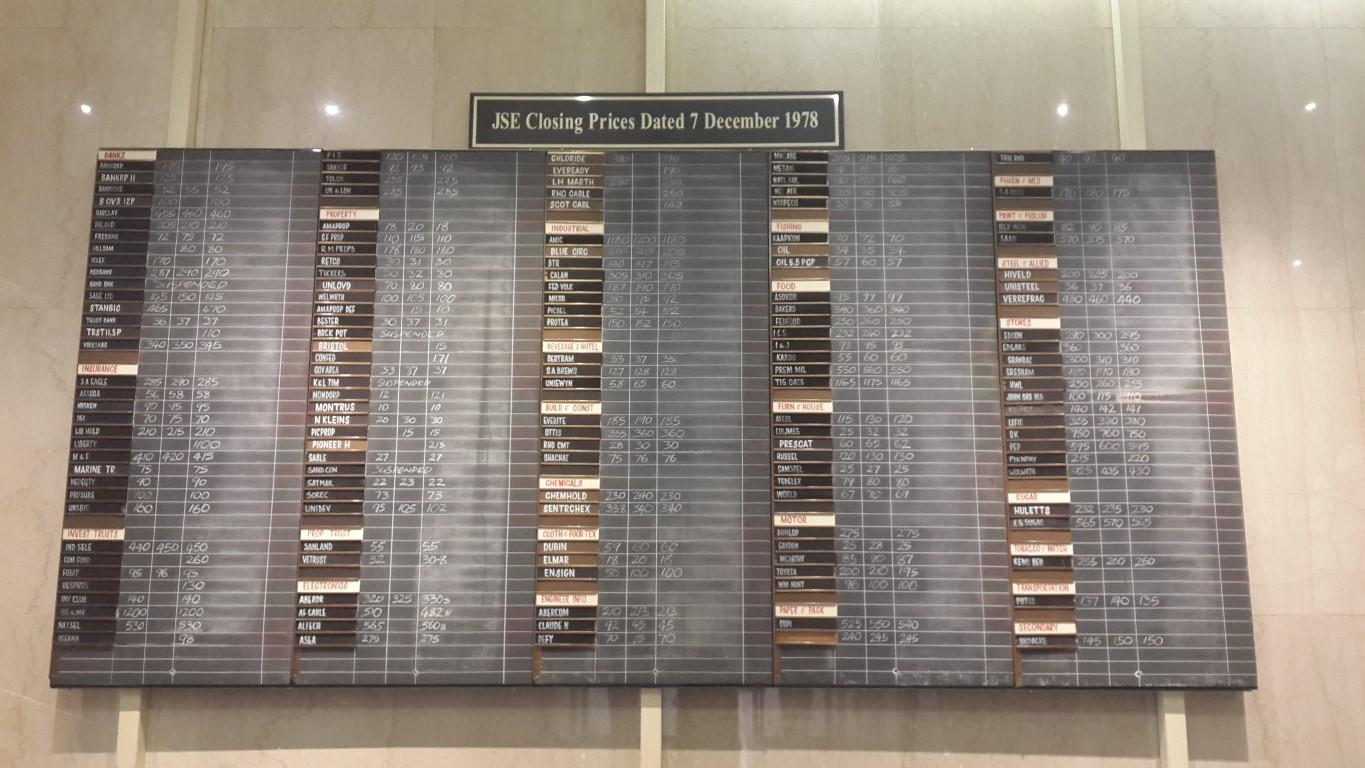 The Fifth Stock Exchange Building, located at 17 Diagonal Street, opened in 1979 and marked the end of the Hollard Street era. It was designed by Monty Sack and was one of the first atrium buildings in Johannesburg. Commentators at the time believed that the move would be a major catalyst for the development of the area from Diagonal Street westwards to the M1. Although a number of significant buildings were erected, the overall vision for the area fell victim to the larger trend of CBD decline and the flight to the North. Predictions were made in 1979 that the JSE would be based at Diagonal Street for 50-75 years. It lasted just over twenty before relocating to Sandton. The old trading hall has been preserved and from time to time special functions are held there. 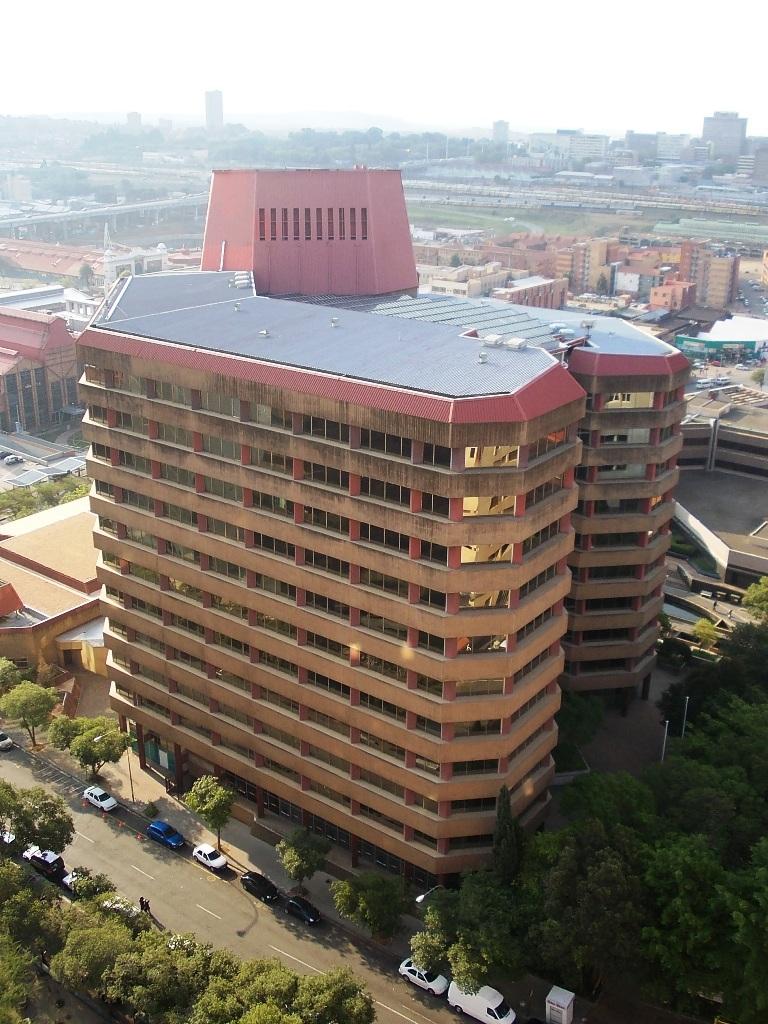 The Old JSE Building from above (The Heritage Portal) 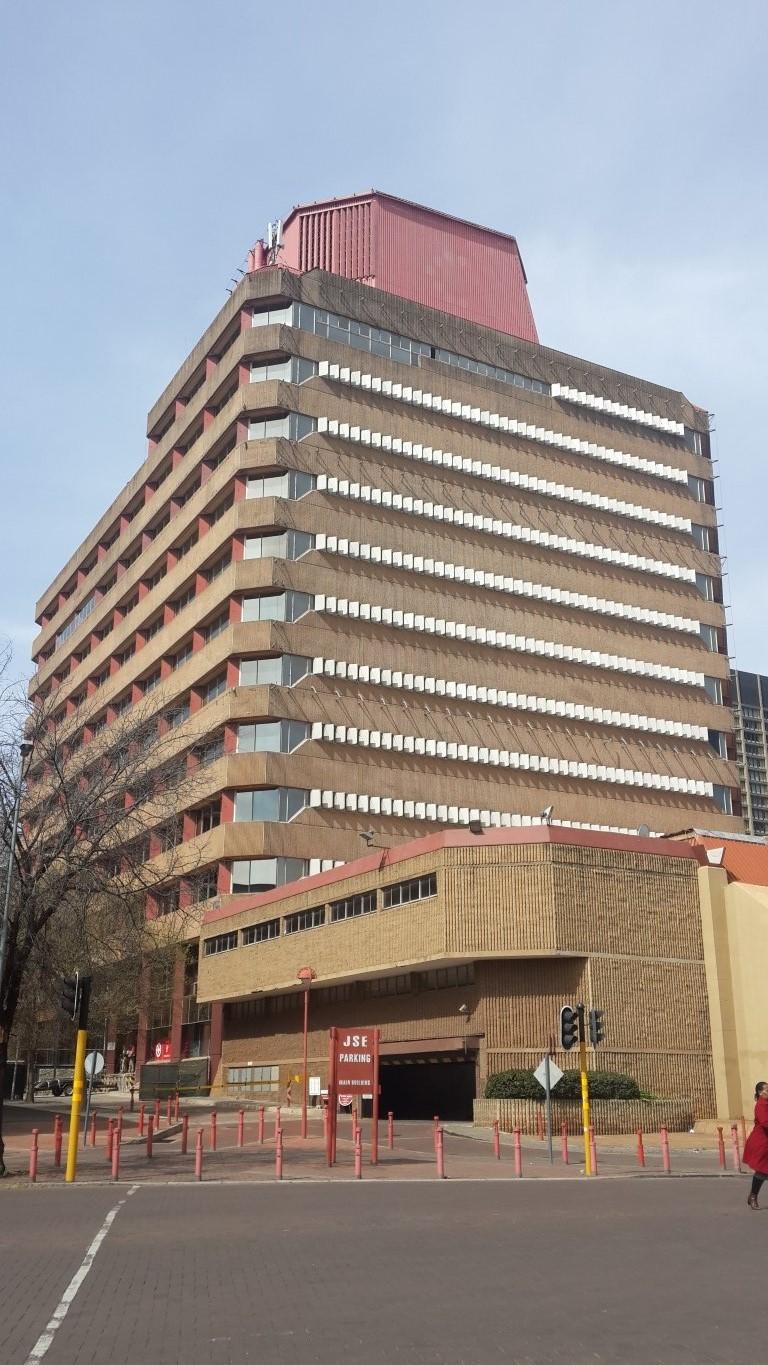 Another shot of the old JSE Building (The Heritage Portal)

In 2000 the Johannesburg Stock Exchange relocated from 17 Diagonal Street to its current home at Exchange Square on Gwen Lane / Maude Street in Sandton. Exchange Square was designed by TPC architects and is surrounded by banks, hotels and corporate headquarters. Sandton continues to expand and it is hard to see the JSE relocating anytime soon. Having said that I won't be making any predictions or placing any bets given the JSE's journey over the last thirteen decades. 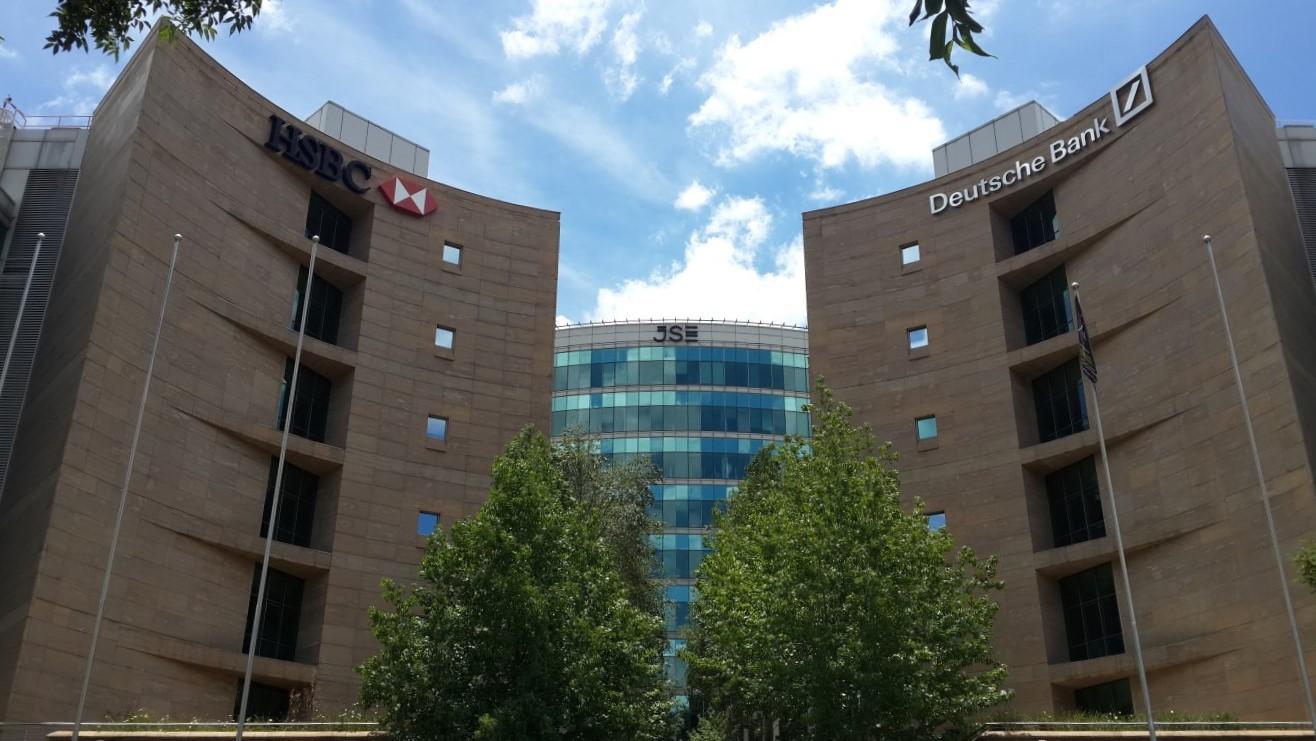 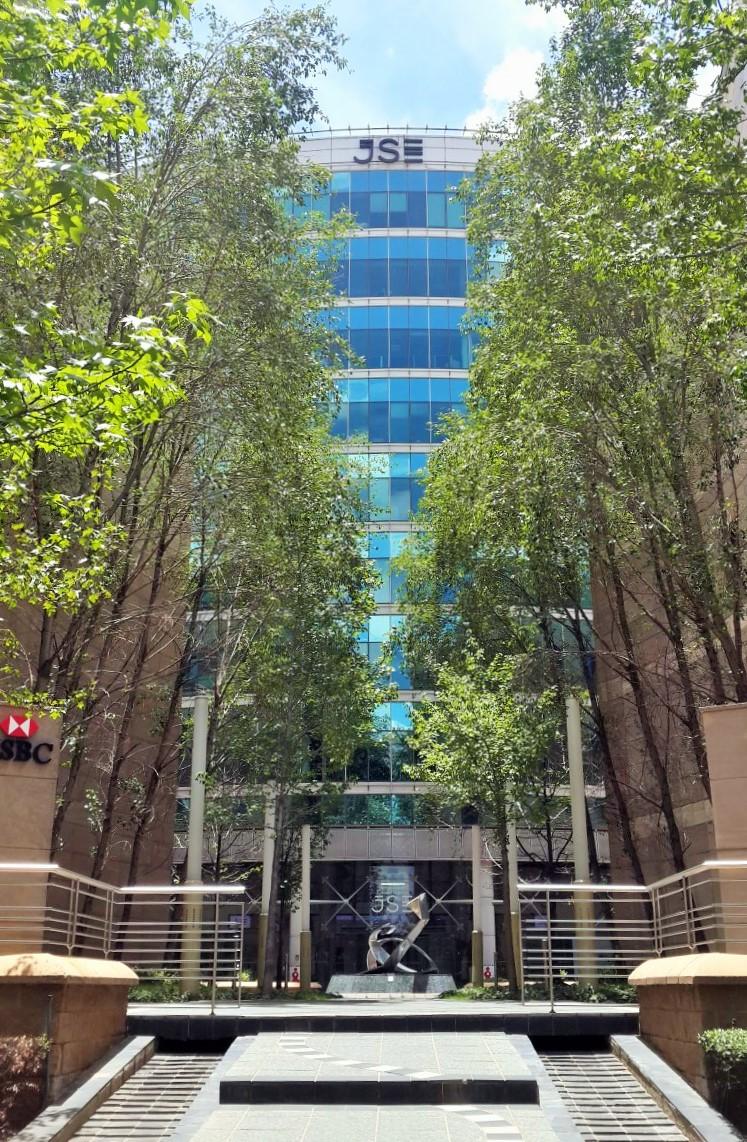