Report from the 2012 Heritage SA Symposium 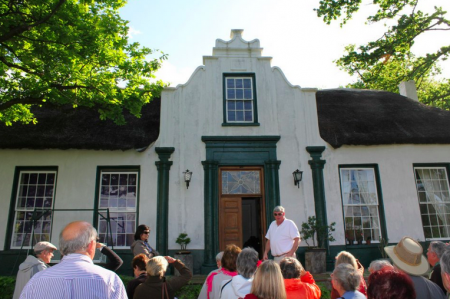 [Originally published March 2012] Every year Heritage SA (renamed the Heritage Association of South Africa) runs a powerful symposium for its members and affiliates. Last year the Drakenstein Heritage Foundation played host and selected the following theme: 'The role of inidgenous peoples, settlers and slaves in creating 18th century opulence at the Cape.' Below is a report that appeared on the Heritage SA website via Courant Vant Vlekaancaap.

The Symposium theme revolved around the development of the 18th century Cape Manor House, the economy of the Cape, and the factors that contributed to the wealth of the settlers at the Cape. It was an extremely successful and well-attended symposium and it was very satisfying to see a number of our own branch members at the various lectures and outings.

Over 90 people attended the lectures on Friday. Thursday was devoted to matters relating to Heritage SA at the Annual General Meeting. The same evening there was the unveiling of plaques to mark historical sites associated with forced removals in Paarl with members of the community recalling these traumatic events.

Friday provided very interesting lectures starting with the early geology of the Paarl Valley going back millions of years to Gondwanaland. The lectures highlighted the life of the early inhabitants of the area, their first contact with the new settlers as well as the impact colonialism had on the indigenous people. One lecture gave a fascinating glimpse of the material wealth (or not) of the inhabitants by studying MOOC (Inventories of the Orphan Chamber) documents in the Cape Town Archives Repository. Later the afternoon Len Raymond invited all attendees to accompany him on a walk in the centre of old Paarl starting at the Toringkerk (right) and then progressing to Mill Street.

Saturday was devoted to a short lecture by Len on the remaining 18th century homesteads on farms in the area before departing in two buses on a very interesting tour. We saw neglected as well as beautifully restored homes. Lunch was at Babylonstoren where all of us received a bottle of estate wine. After a visit to the homestead, we had the opportunity to see the magnificent clivias in full bloom.

A very insightful and entertaining few days with a very positive atmosphere and it was good to make contact with people from other branches.