Potchefstroom has lost one of its grand old buildings

What was once the pride of the British garrison at Potchefstroom, is now a pile of rubble. The city recently lost one of its Grade 2 Provincial Heritage Sites, when the General’s House was destroyed in a veld fire.

The General’s House was the only brick and mortar building in a sea of galvanized iron structures built as part of the garrison of Potchefstroom after the Anglo-Boer War. The building has been standing empty for two decades, in spite of numerous attempts by various individuals and organisations to have it restored and used. Early in June a concerned resident of Potchefstroom tried to contact the relevant authorities to warn them of the dangers of the vegetation right next to the building catching fire. He took photographs showing dried grass and trees growing up against the walls of the house.

Potchefstroom experienced a boom after the Anglo-Boer War, when thousands of British soldiers were stationed at the garrison. To accommodate them cantonments were erected. These galvanized iron and wood structures were made of Jarrah wood and imported from India. Costs for the construction of the cantonments in Potchefstroom amounted to approximately £1,5 million. Facilities catered for any conceivable need of the occupants. Apart from barracks, there were stables, hospitals, schools, recreational grounds, polo fields, clubs, reading rooms, post and telegraph offices, described as “all appurtenances of civilisation”. The streets were wider and better kept than those of the town of Potchefstroom. Almost immediately the garrison and its occupants contributed to an economic boom in the town and enlivened its social life. At most times the garrison housed 2 000 with a capacity for 10 000.

Against high ground with a panoramic view over the cantonments, what was known as the General’s House, was built in the first decade of the 20th century. However, it is unclear if a general ever resided for a period of time in this residence of the commanding officer of the garrison. This was, however, not a galvanized iron structure, but a beautiful Edwardian building built from bricks and mortar, adorned with decorative fretwork on the veranda.

The floor of the veranda was made of wood and decorative sandblasted panes were set into the front door. Bay windows adorned the front of the house and beautifully crafted built-in wooden benches the foyer.

What is locally known as the General’s House, was built as a residence for the commander of the garrison of British forces, established in Potchefstroom after the Anglo-Boer War. The first occupant was likely colonel SCH Monro. These built-in ornamental benches were in the foyer. (Lennie Gouws) 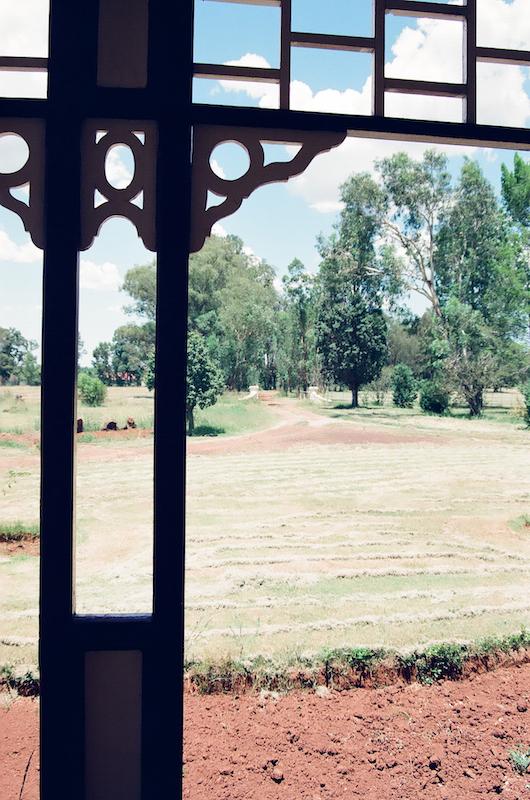 The General’s House and its surrounding gardens were declared a National Monument in 1982. This is how it looked in 1997. Since then the building suffered much neglect and was destroyed in a fire on 17 July 2020. (Lennie Gouws) 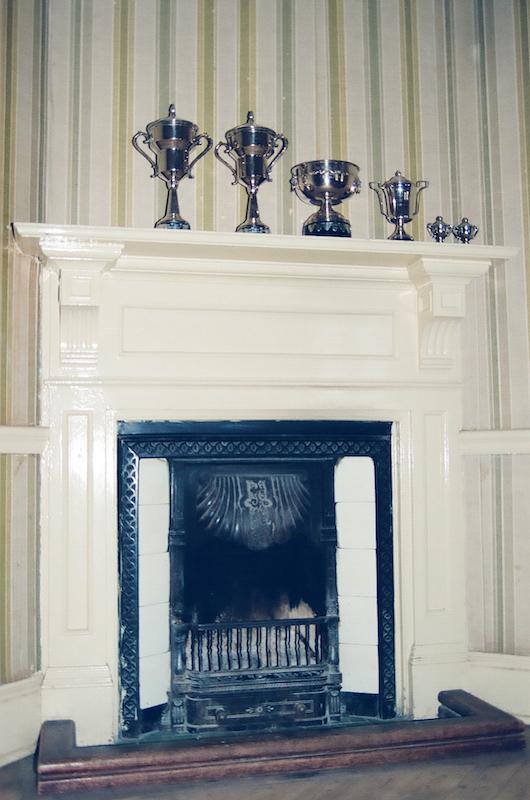 Before being vandalised between 2000 and 2006 fireplaces in the General’s House were ornamentally decorated. A member of a local heritage organisation visited the property in 2006 and noted that all metal and electrical fixtures were ripped out. This photo was taken when the General’s House was the home of the North-West Cricket Board between 1996 and 2000. (Lennie Gouws) 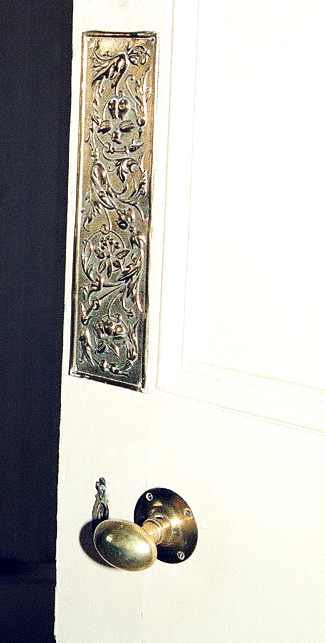 A copper finger-plate in the General’s House (Lennie Gouws)

The grounds around the house were laid out in a pleasing garden with a clay tennis court and a large bird cage.

Outbuildings include an outside toilet and a galvanized iron coach house. In front of the house was a large parade ground used for ceremonial purposes

Information on who lived in the house is scarce. One of the known occupants of the General’s House was Colonel SCH Monro, the first commanding officer of the garrison.

During the 1920s the galvanized iron structures nearest to the house were used to found the Witrand Psychiatric Hospital. Over time some of the structures housed the Potchefstroom Normal College, later the Teachers Training College. These were re-erected elsewhere on grounds of the College and known as the “tin temples”. Some of the other structures were bought by the Potchefstroom University College in 1923. The last of these were demolished in the 1950s.

The General’s House was incorporated into the grounds of the Witrand Hospital and it became the residence of the superintendent. In 1980 the film “Royal” was shot in the house. The house and its surrounding gardens were declared a National Monument in 1982. In 1986 the building was fully restored, funded by the local branch of the Foundation Simon van der Stel.

The North-West Cricket Board rented the house for their offices from 1997 to 2000, when they moved to new purpose built offices in the main pavilion of their new cricket oval, formerly the rugby stadium of the Teachers Training College.

When a member of Heritage Potchefstroom Erfenis visited the General’s House in 2006 he found that the copper finger plates and the metal surrounds of the fire places were stolen. Light fixtures and switch plates were ripped off the walls.

Attempts by an artillerists’ association to acquire the building for their offices were unsuccessful and the building slipped into further ruin.

When Mr Gawie van der Walt visited the site in early June 2020, he was shocked at the derelict state of the building and terrain. He took pictures of the overgrown and dried vegetation right next to the house and sent it to the local ward councillor. Attempts to clear the vegetation by the municipality ended up in bureaucratic quagmire and nothing was done. 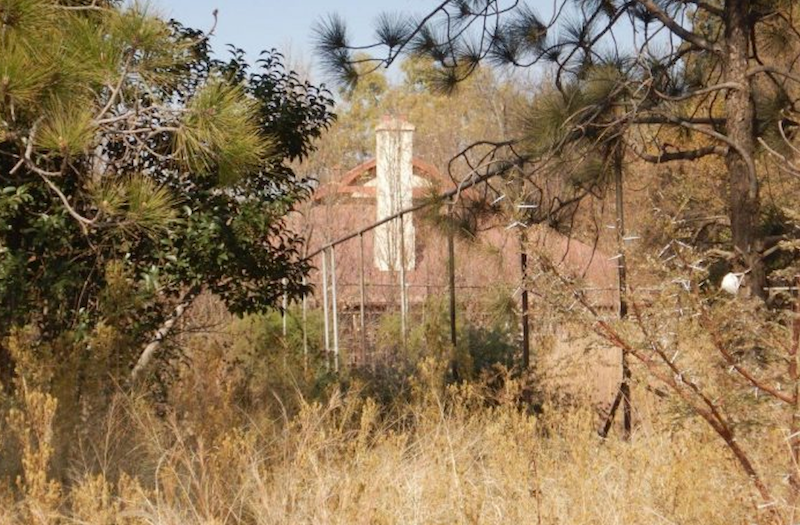 Mr Gawie van der Walt of Potchefstroom took this photograph of the General’s House in early June showing the overgrown vegetation. In spite of attempts to have it removed, nothing happened and the Provincial Heritage Site burned down on 17 July 2020.

The Potchefstroom Herald reported that a veld fire, which started next to the Louis le Grange Drive, near the house on 17 July moved into the grounds and the house burned down before the local fire brigade was able to save it. 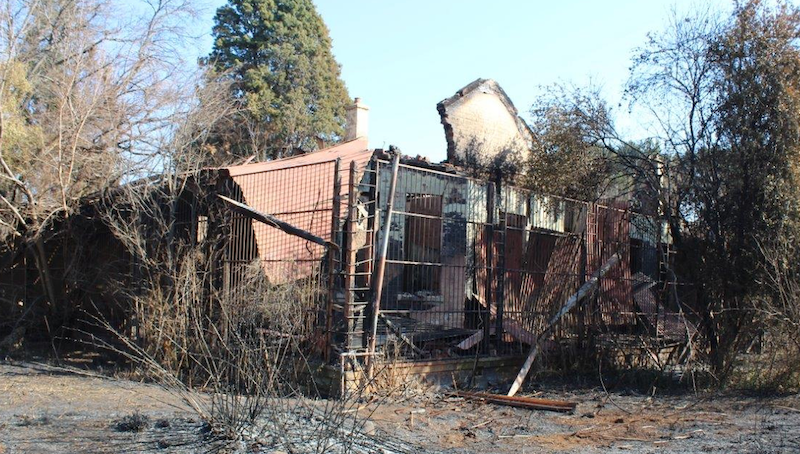 Venessa van der Westhuizen, a reporter of the Potchefstroom Herald, took this photograph of the ruin of the General’s House after the fire.

The chairperson of Heritage Potchefstroom Erfenis, Mr Johan Wolfaardt told the Herald that the building is the property of the Department of Public Works. According to him their lack of interest, unavailability of officials and the fact that the building stands on the grounds of the Witrand Hospital, making access difficult, hampered all attempts to save the building.

Potchefstroom has truly lost one of its grand old buildings.

Click here to view the article on the fire in Afrikaans in the Potchefstroom Herald.

Main image: The General’s House, a Grade 2 Provincial Heritage Site in Potchefstroom, was lost when a veld fire destroyed the building on 17 July 2020. This is how the building looked in 1997, shortly after restoration. (Lennie Gouws)