Restoring one of Kimberley's grandest homes in 1976 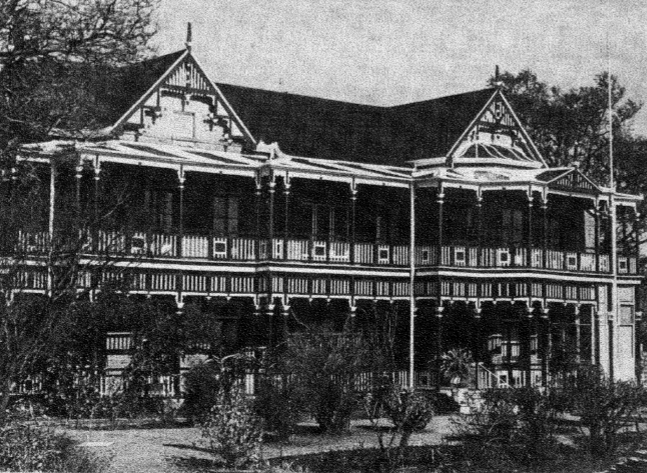 Thank you to the Heritage Association of South Africa (HASA) and the University of Pretoria for allowing us to publish this powerful piece on the restoration of Dunluce in 1976. The article was first published in the 1978 edition of Restorica, the old journal of the Simon van der Stel Foundation.

When Dunluce came onto the market in mid-1975 the only interest shown came from a speculator who wished to demolish the house and build a block of flats on the site. In their concern to save the house the owners, Mrs Rosemary Kempen and Mrs June Fannin offered the house and its contents to the Director of the McGregor Museum at a more favourable price. The Museum was in no position to purchase the property but we realized that the case for preservation would be strengthened if we could make a proposal for its ultimate use. To this end we suggested that firms which had been recently established in Kimberley should be approached to buy the house as a manager's residence. At this time our sole purpose was to save Dunluce and not to acquire further property but Barlows Rand Ltd offered to buy the house and its contents for the museum on condition that their manager could live there for ten years with the option to stay on for a further five years. The Trustees of the McGregor Museum accepted this magnificent offer in November, 1975 as well as the funds and the responsibility for restoration. 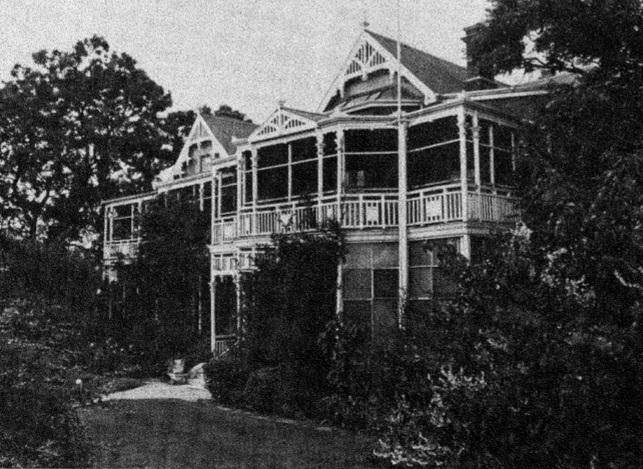 It was important to save Dunluce first because it is one of Kimberley's most gracious town houses and reflects the elegance and style of the Diamond Prince. It has attracted the attention not only of architects and artists but also of the man-in-the-street. It is also significant for its association with John Orr JP, MBE, founder of the firm that bears his name and city father having been elected twice in 1909-1910 and 1916-1918 to fill the honoured position of Mayor of Kimberley. The acquisition of a house together with its furniture and fittings, linen, utensils, toys, books and photographs is a unique one giving a complete picture of the life and pastimes of two generations. As such it is a valuable social document which must be preserved.

The residence in the elite suburb of Belgravia was designed by D W Greatbatch in 1897 for a member of the Diamond Syndicate, Gustav Bonas. A glance at the original plans leaves no doubt that every facility was provided for the lavish receptions which we believe took place there. During the Siege of Kimberley a 100 lb shell from the Boer gun, Long Tom, which was aimed at the Sanatorium, Rhodes' headquarters, fell short and crashed through the roof causing havoc in a rear bedroom and the breakfast room. A contemporary photograph in the "Souvenir of the Siege of Kimberley" published by the Diamond Fields Advertiser shows the damage that was caused. On the left hand side of the photo is a coal scuttle which still stands near the fireplace in the Breakfast room. Shortly after the Anglo Boer War Mr Bonas returned to London and sold his residence at 10 Lodge Road on 13th October 1902 to the merchant John Orr. We found receipts in favour of John Orr to the amount of £6 400 "for the residence Lillianville", £1 087 "for furniture and lamps" as well as the transfer fee of one guinea. We believe that the furniture in the breakfast room - the side board, buffet, overmantel, table, chairs, and coal scuttle - was included in this transaction.

Shell damage in the breakfast room of Dunluce during the Siege of Kimberley 1900.png 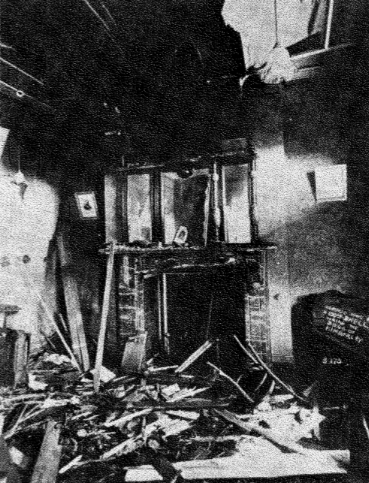 In 1903 the house was renamed Dunluce meaning "strong fortress" after a ruined castle in Northern Ireland, John Orr's land of birth. It was after moving here that John Orr began to play an active part in church and civic affairs - there was hardly a committee on which he did not serve - the Public Gardens, the School Board, the Town Council, the SPCA, the Theatre Royal, the Diamond Fields Branch of the Gaelic League and the First Board of Management of the Alexander McGregor Memorial Museum. His interests ranged from gardening, to homing pigeons and the Cambrian Male voice choir. He also worked for the amalgamation of Kimberley and Beaconsfield and was elected Deputy Mayor on the first City Council in 1913 with Sir Ernest Oppenheimer as Mayor.

John Orr lived at Dunluce for 30 years and after his death in 1932 members of family stayed there until October 1975. Through the years furniture that he brought with him such as the elegant suite in the master bedroom has remained but new pieces were added in the twenties, the thirties and the forties. Many of the wedding presents featured in a 1925 photograph are to be found in the house and the nursery is still alive with the toys, books and novelties which belonged to Rosemary and June Cooper, his granddaughters.

The first step in restoration was documentation. All the rooms were photographed as we found them and their contents catalogued and marked in such a way that they could be replaced once restoration was completed. A chronology of events associated with the house and the family was drawn up as background for restoration and publicity. Our chief sources were the house itself, the original plans which showed the architect's intent, the numerous family photographs which helped with details and dating changes to the house as well as oral evidence from the family and friends who had visited Dunluce. Once all this information was collated restoration priorities were set. The period 1903-1932 was favoured as this was the time that John Orr lived there. Also in the repair of structural defects we decided to concentrate on the house and not on the outbuildings which included fernery, servants quarters, ablutions, sheds, stable, coachhouse and garage. As the house was to be lived in by Barlow's Manager, we had to consider his comfort and convenience. To this end electric geysers were installed and the slow combustion stove disconnected from the hot water pipes.

A house that is 80 years old undergoes many changes - and the problem was whether to be ruthless and restore to the original or to retain added features which give the house some of its character. As we found a very clear photograph of John Orr and his family taken at the gateway to Dun!uce in 1903 shortly after they moved in, the decision was taken to restore the facade to this date. To this end fly screens were stripped away, a room built into the balcony was dismantled, a match wood ceiling replaced the ceiling board on the verandah and the railings were painted in green and white. We have, however, retained an extension to the verandah on the south side of the house, the canopies over windows on the north wall and an additional bathroom and bedroom which we understand were built on in the early thirties. 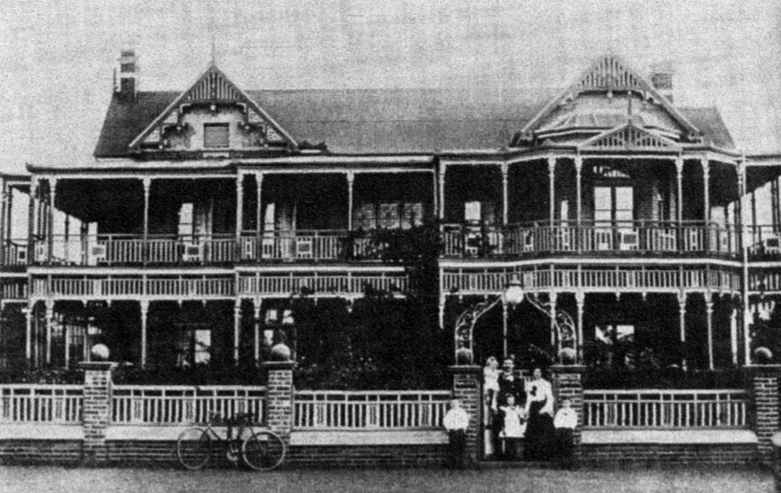 Indoors it has not been so simple and as yet no decision has been taken as to whether to assign different periods to the different rooms or to keep them a mixture of periods as the family lived in them. A large portion of the funds for restoration was spent on re-wiring to conform with municipal regulations. In order to retain the condemned brass and porcelain switches they were fitted with a low 12 volt system which when activated trigger off a switch in a central switch board which in turn relays current to the light. Apart from this major work, indoor restoration has been restricted to redecoration and re-papering in the breakfast room. A William Morris wall paper similar in design to that seen in the "Souvenir of the Siege" photograph was readily available.

The work of restoration took eight months at a cost of R36 000,00. Our architect was Mr D Yuill of the firm Timlin, Goldblatt, Nixon and Partners and the building contractor was Mr J Crawford. Dunluce was officially handed over to the Museum on 24th October 1976 by Mr C S Barlow, Chairman of the Barlow Rand Group of companies.