Landmark Potchefstroom building to be sold at auction 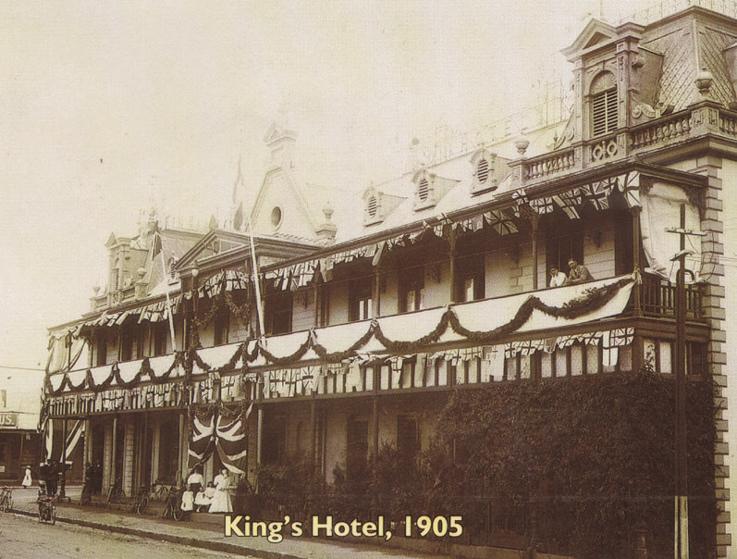 One of the landmark historical buildings in Potchefstroom is to be sold by auction. The former King’s Hotel is up for bidding on 21 February. In its heyday the King’s was known as one of the best hotels in the country. 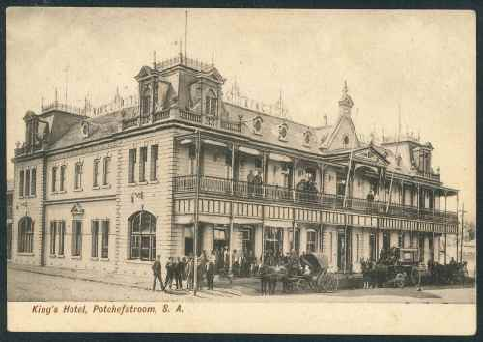 One of the best hotels in the country 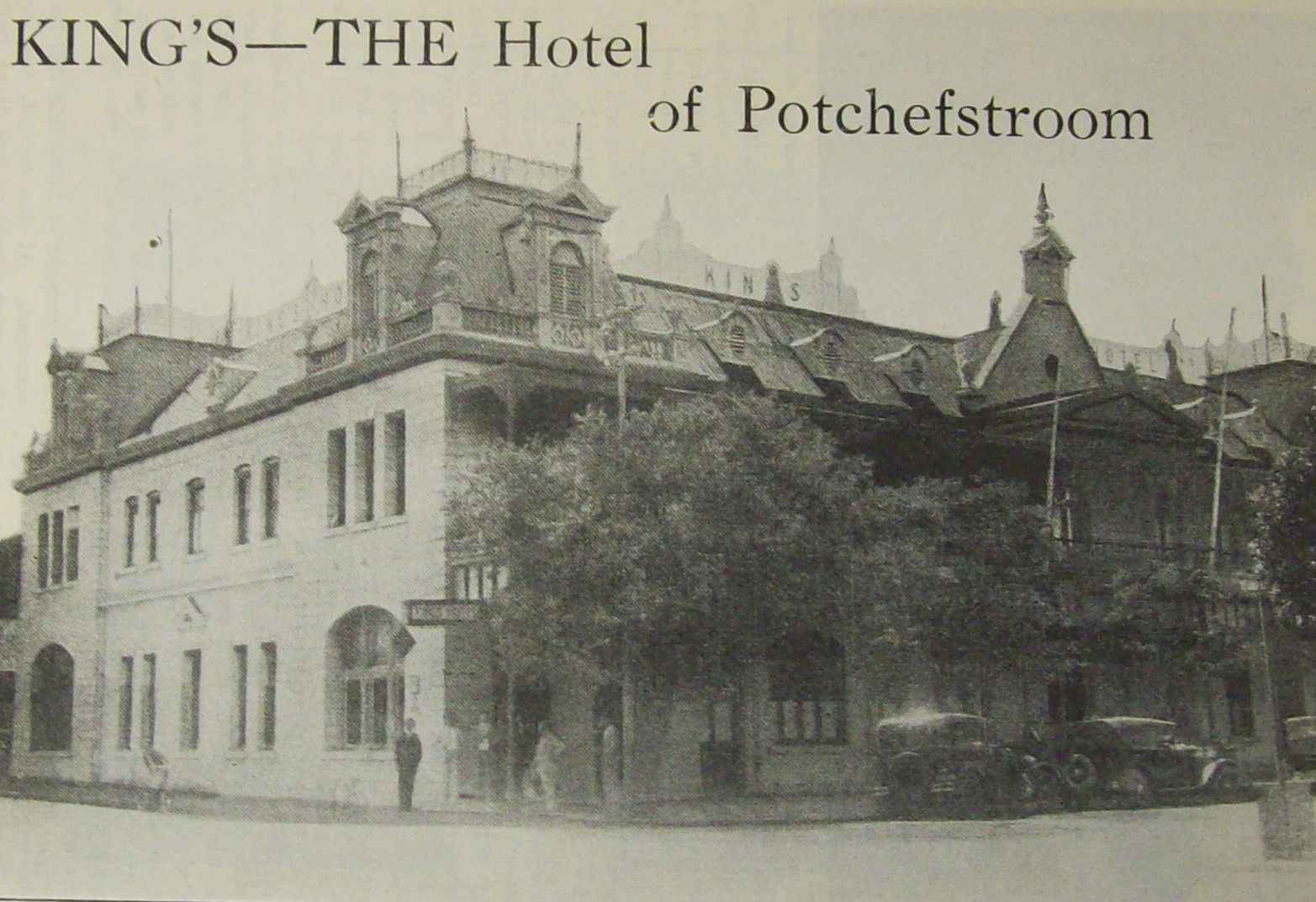 The Baumann family built the King’s in 1902 “in a substantial scale” according to a Potchefstroom tourism brochure, published in 1932. Building costs amounted to a whopping £25 000. The Baumanns owned a brewery just across the street from the hotel and their beer was exported in large quantities to the newly established Johannesburg, where it became quite famous.

The King’s was a magnificent building in the Victorian style. On the roof the name was delicately written in wrought iron work. Two ornamental towers capped both ends of the building which faced onto the Potchefstroom market square.

Wrought iron pillars supported a balcony that ran the length of the front. This created an excellent space where the genteel patrons could sip tea in comfort and shade and watch the bustling activities on the market square below. They also had a bird’s eye view on building activities when the city hall was constructed on the market square. The city hall was officially opened in March 1909 by the colonial secretary, General Jan Smuts. 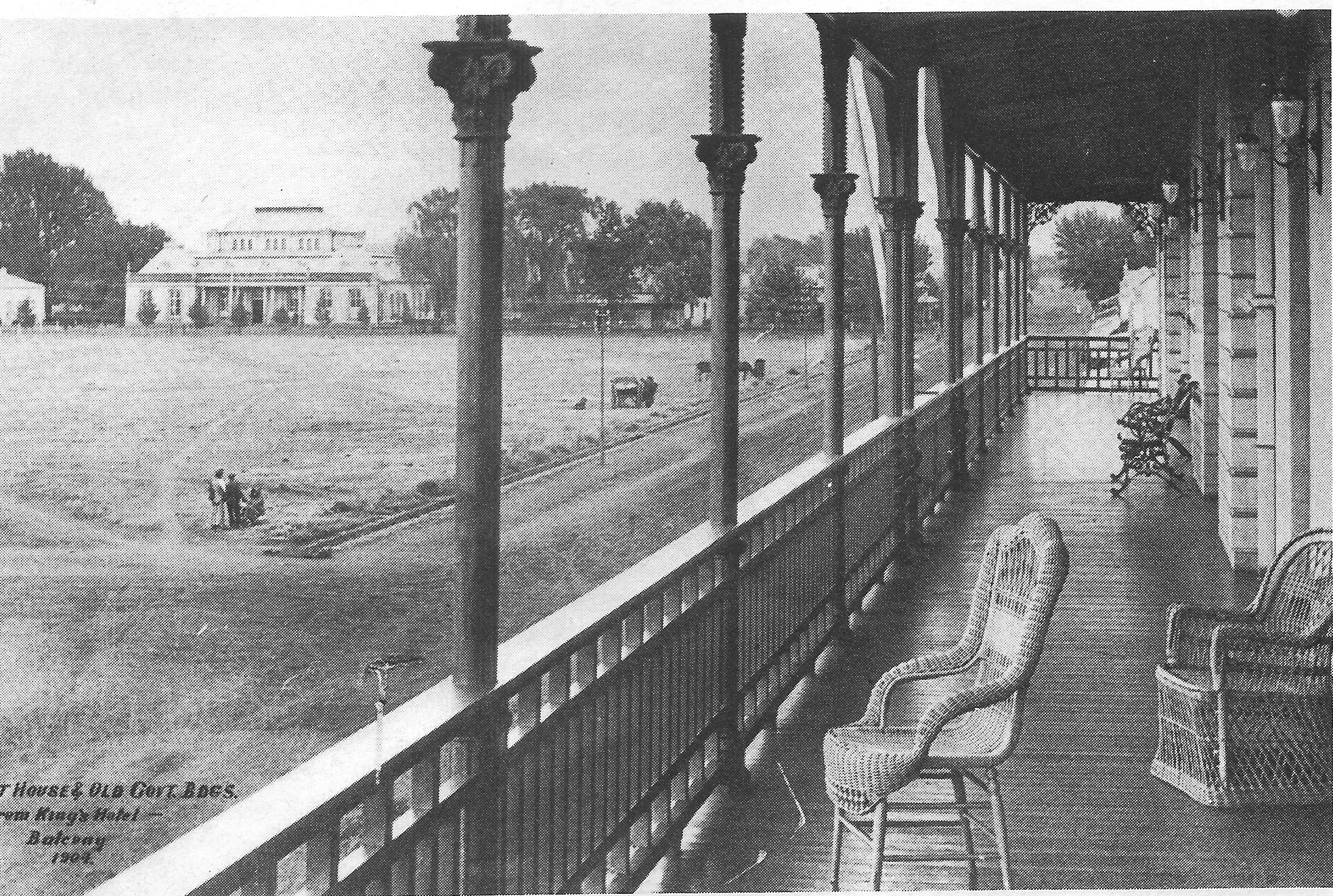 The King’s was a destination

In 1905 a long cavalcade of trendy cars made their way over the almost non-existent gravel roads from Johannesburg to Potchefstroom.

It was the first weekend tour of the Transvaal Automobile Club and their destination was Potchefstroom. The travellers looked forward to staying over at the newly built King’s Hotel, one of three modern hotels that were built here in the post-war boom years. The King’s Hotel was built on the corner of Potgieter and King Edward Streets (currently Nelson Mandela and Walter Sisulu) on the premises of the former shop of Pavey and Reid, the first shop to open in Potchefstroom. 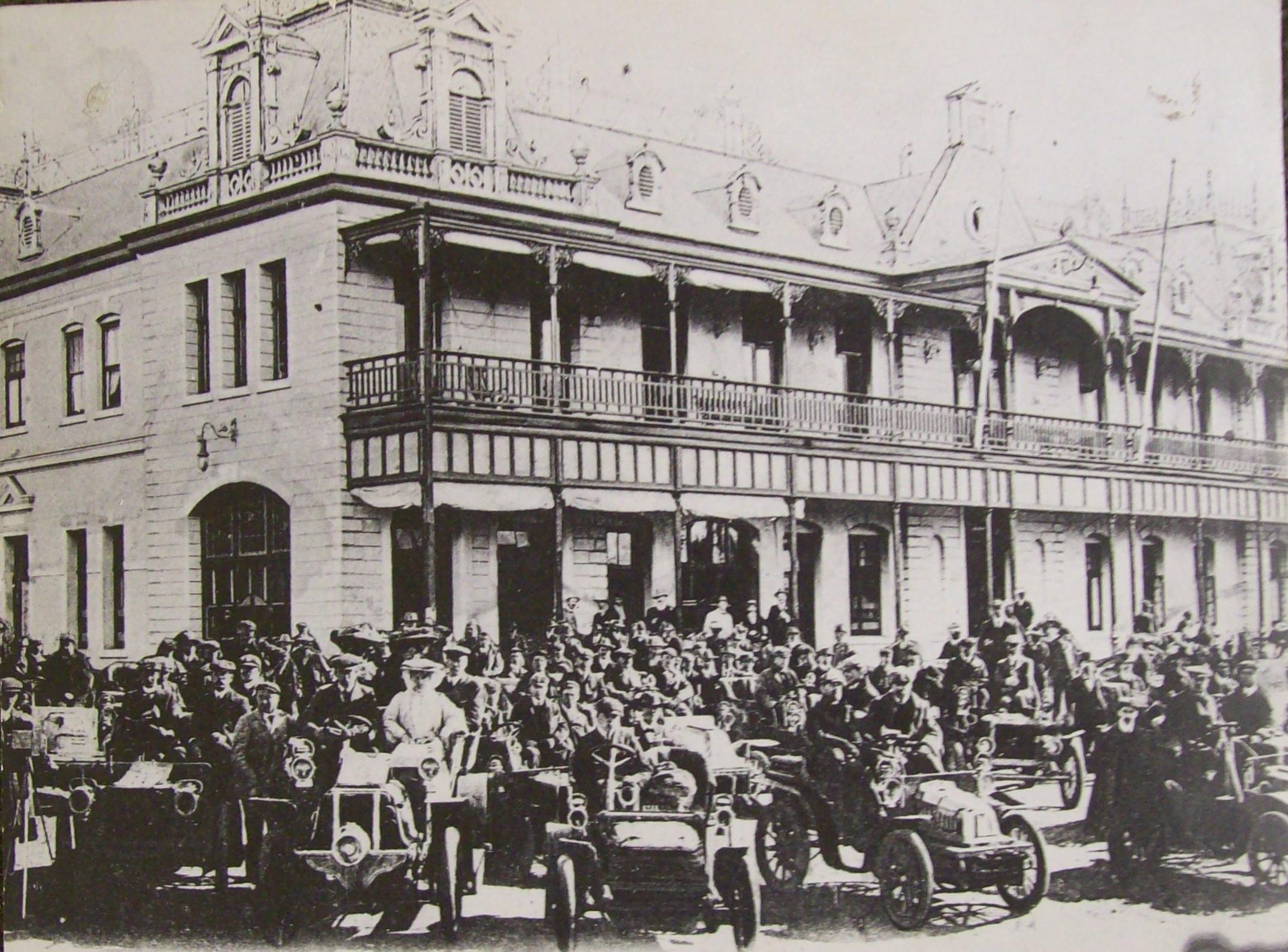 In 1905 the King’s Hotel was the destination for the first weekend tour of the Transvaal Automobile Club (Potchefstroom Museum).

The 1932 a brochure described the King’s as follows: “The hotel is excellently appointed with commodious public rooms, large and airy bedrooms, hot and cold water all day and night, a first-class table and every modern comfort and convenience.” 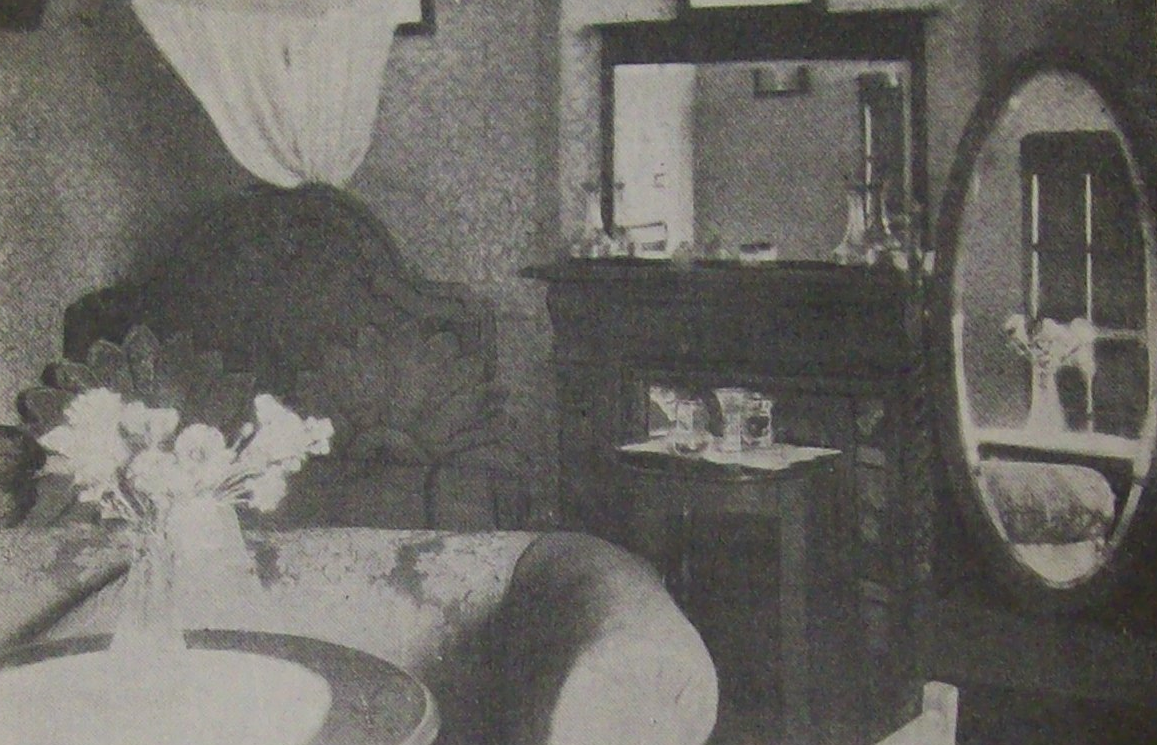 A bedroom suite photographed in 1932

From the beginning the King’s was associated with the golf club of Potchefstroom, which was built shortly after the war and the King’s was known as the “19th hole” of the golf course. By 1932 the King’s was owned by Mr. & Mrs. C. Barnard, who according to the 1932 brochure were “well-known in the South African hotel world.” 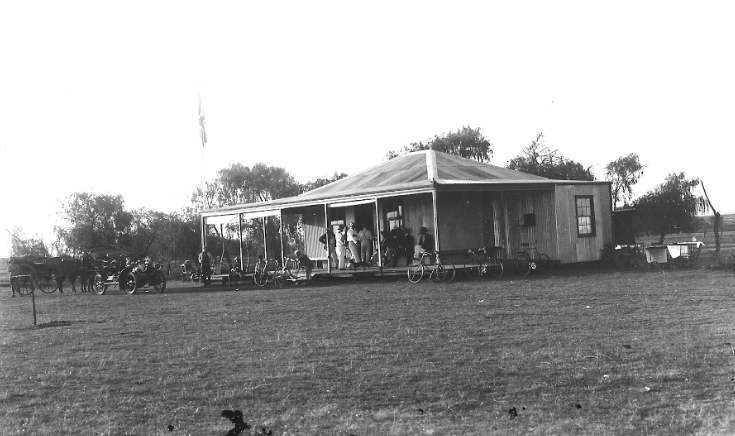 Due to the efforts of Magistrate T.G. MacFie, the Potchefstroom golf links were created when swamps along the Mooi River were drained. It was officially opened on 18 May 1908. The photo shows the first club house. The King’s Hotel was regarded as the 19th hole of the Golf Club (Photo: August D’Ange D’Astre). 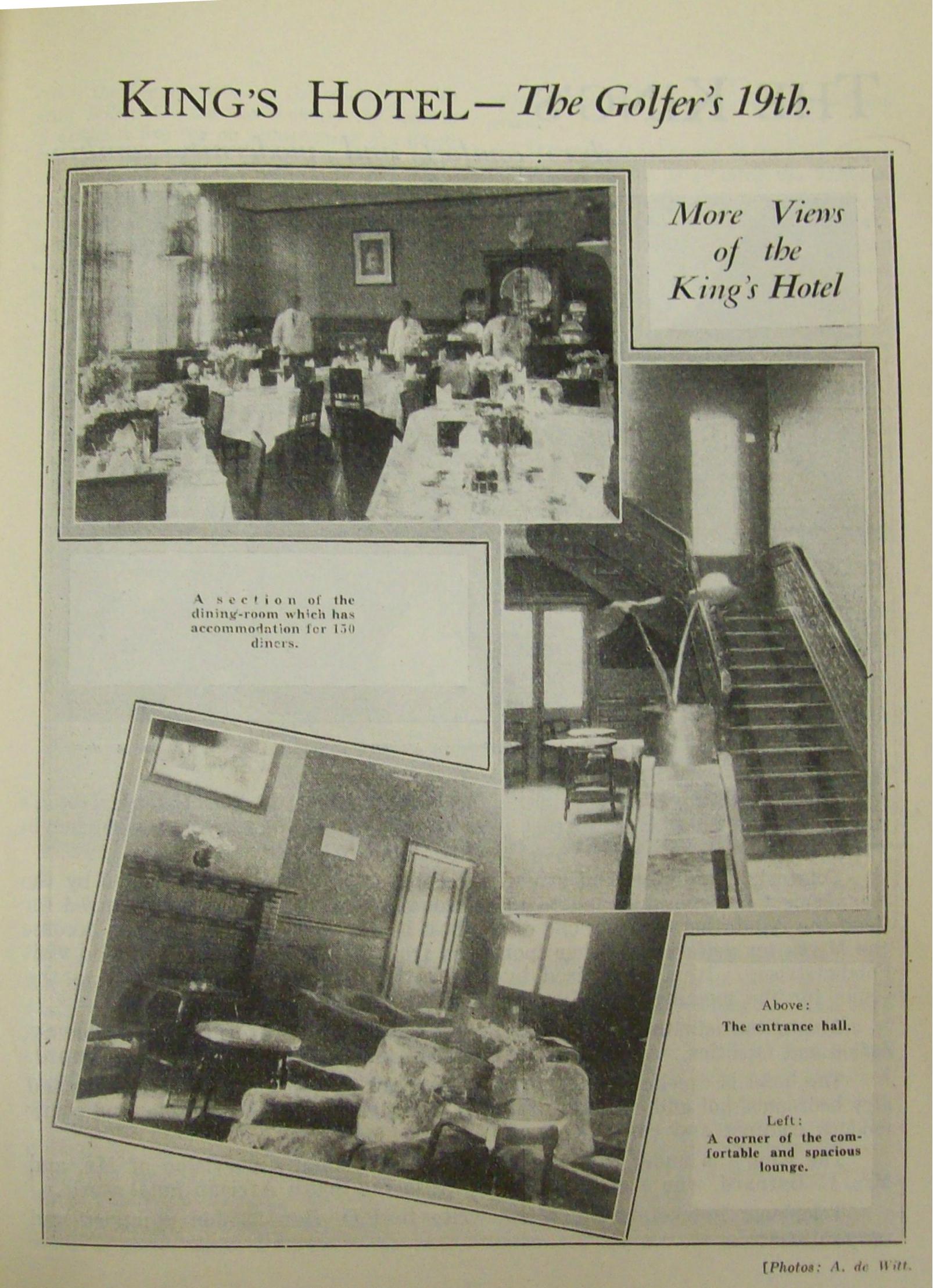 Tragedy struck twice at the King’s. In 1906 the owner of the King’s, a Mr. Wernher Jahn committed suicide in the hotel. The Potchefstroom Herald, in February 1911 described how another owner of the hotel was killed by a disgruntled employee.

Mr. Frederick Wilken (44) was shot in the passage leading from the dining room to a back door by a waiter, only named as Rose. It happened on Tuesday 20 February 1911 during the serving of the evening meal. Rose, a waiter, appeared to be drunk and was told not to enter the dining room.

He objected, left the area and came back later. Mr. Wilken, who just arrived after attending to business in Roodepoort, was shot in the heart and died on the scene after he confronted the waiter. Rose then went to his room at the back of the hotel and shot himself in the mouth.

In spite of this, the King’s remained one of the best hotels in Potchefstroom for many years. From the 1940s to 1960s, when students of the Potchefstroom University College were not allowed to dance on the campus of the PUC, the X Club operated from the King’s Hotel. A dance band accompanied illicit student dances.

Modern times caught up with the King’s in the early 1960s. The beautiful balcony which added much to the graceful façade of the hotel was demolished and replaced with a concrete structure sturdy enough to support bathrooms for each of the rooms at the front of the hotel. 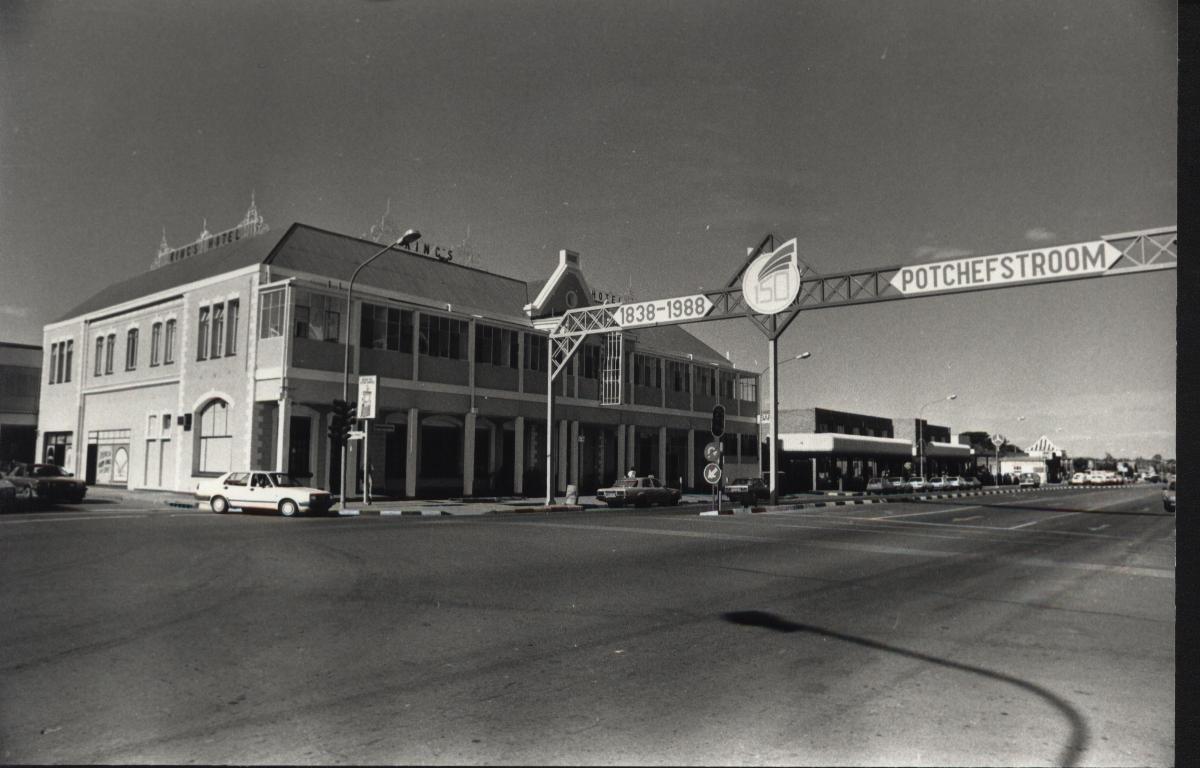 The once proud King’s Hotel lost its decorative balcony during 1964, when it was replaced with bathrooms. This photo was taken in 1988 when Potchefstroom celebrated its 150th anniversary and a commemorative arch was erected in front of the King’s (Potchefstroom Museum).

By 2013 the King’s was used as quarters for the members of the South African Police Service.

According to the current auctioneer’s listing, the King’s has retail space and 54 rooms. The opening bid is set at R1,5 million.

This article will also be published in the Potchefstroom Herald (Thursday 15 February 2018).

Main image: King's Hotel during the Royal Visit in 1905