In the beginning, the economic power was the Afrikaner ox, which adapted to the natural conditions, the vagaries of the climate and the stern masters of nature. Indeed without this breed of cattle the coming into being of a new nation in South Africa may probably have been delayed for quite an age. 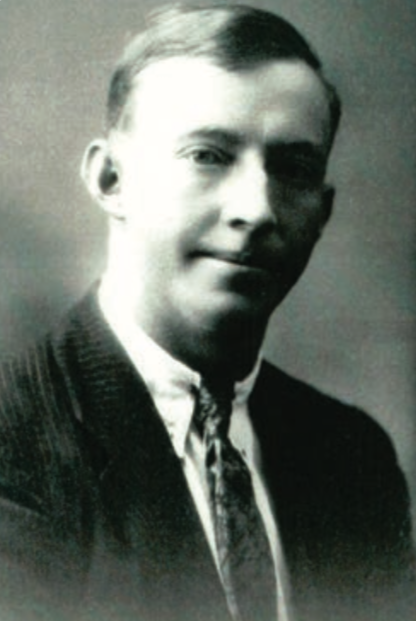 William Kenneth Shuman (The Ox-Tamer) Born 1904 - Died 1952. With ease he mixed well with young and old alike - a tantalising teaser in a pleasant manner and a hearty laugh. Fine looking - as strong as an ox and a tireless worker, he had a solution to any problem. Ken - the gentleman and friend.

Ken Shuman was founder of the Grey Craig Afrikaner herd near Queenstown in the Eastern Cape. From the commencement of his farming activities he concentrated on breeding purebred animals because of his love for good quality. He had an unshakable belief in the Afrikaner as a breed of cattle and the idea of crossbreeding was something foreign to him. His motto was: ‘To keep the Afrikaner pure is to ensure its existence.'

Having had the privilege of growing up with the manure between his toes, Ken’s observations of animal behaviour began at an early age. There are a few of us who remember the early morning parade of eight Afrikaner oxen, as they lined up according to their correct pairing along the length of the trek chains waiting for their names to be called to enter the yolks. As Ken said, each one was a distinct individual with a personality and mind of its own, often devious.

The Grey Craig four wheeled wagon was drawn by a span of six oxen and used extensively on the farm for big loads. A Scotchcart was also used - these carts were copied from the ones in Scotland - a heavily made cart with two wheels, drawn by two oxen for smaller loads.

The yolk was a round pole with four holes, two on either end for the skels. The skels were four pieces of wood for the strops which were brayed riems. All of this fitted into the skiff of the ox - the hollow in its neck. The yolk also had a kram - a u-bolt and nut in its centre where a trens - a piece of riem - attached the yolk to a chain which was connected to the disselboom of the wagon. The span was led by a looped rim around the horns of the two front oxen.

The whip to drive the oxen consisted of the voorslag, a thin riem which when clapped breaks the sound barrier,  and the agterslag, a thicker riem, then gradually thicker till where it is attached to a bamboo stick. The driver throws the whip as if throwing a stone and it claps in mid-air then falls over the oxen rumps.

Ken possessed a rare gift when it came to handling cattle and in particular oxen. With an awareness of cattle intelligence and individuality, he put a lot of time and effort into the training of oxen for draught and ploughing purposes. It is his name that will always be indelibly linked to the Afrikaner ox.

Ploughing with Oxen by George Harvey.png 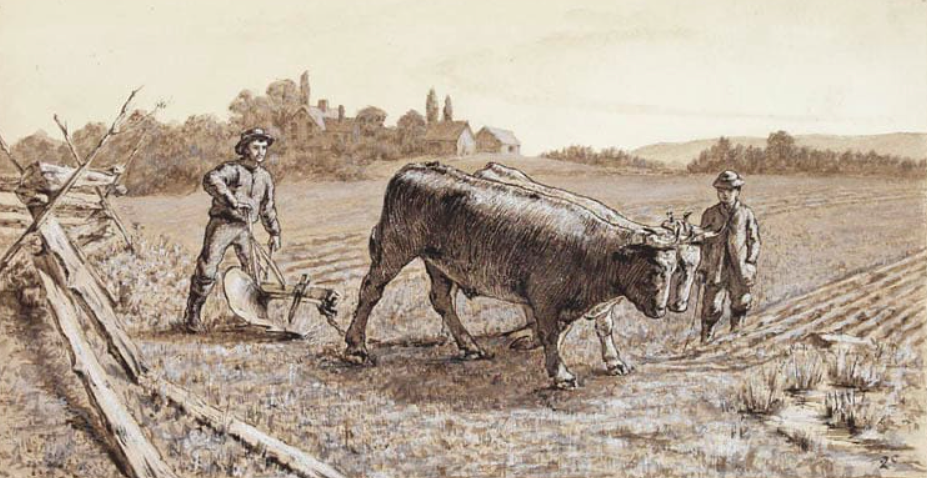 'Ploughing with Oxen' by George Harvey. This sketch was sent to the Shuman Family during correspondence with the Library and Archives of Canada.

Cattle are intelligent animals with very good memories and the ability to learn. I believe they are able to reason to some extent, although they are thought to act on instinct only. They are individuals, each with their own set of mental abilities but because they have primitive brains, their reactions and behaviours are far more predictable than that of humans. This simplifies matters considerably for the cattleman, with a small margin of variation, we know how they will react. To handle cattle properly it is necessary to understand them, and in order to understand them, every cattleman should be a student of cattle psychology. We can learn a lot about cattle by being interested and observant.

Tie a cow three or four times to the same chain in a feeding stable and she will automatically go to that particular spot though there may be fifty identical stanchions in the stable. Catch a cow in a cattle bail for drenching, branding or to be given an injection, and for a long time afterwards she will associate the bail with that unpleasant experience and be reluctant to go through it again. She may have to be pushed through quite a few times before she will voluntarily walk through.

Many interesting tales are told by the older generation who lived in the time when ox wagons were the only means of transporting goods. They lived very closely with their oxen, often sleeping alongside them around the campfire to keep them safe from lions and other nightly perils. There are many unbelievable stories relating to how clever the oxen were, they could follow instructions and steer the span to the left or to the right through many obstacles, through gates and into the previous plough furrow. Rear oxen could guide the wagon through the town streets and the narrowest entrances following the commands of the driver precisely.

Even more fascinating are the human attributes often assigned to these trek oxen. The one is said to be quite fearless and the other a big coward; one could be completely relied on to give every drop of strength and energy it possesses whilst another will always be a loafer. There are the willing ones and obstinate uncooperative ones. Such human qualities attributed to the oxen are used in every conversation relayed by these older people through generations. If we care to stop for a while and quietly observe our cattle, the way they behave, the way they react towards one another, we shall be surprised to find how aptly human characteristics can be applied to them. They are capable of emotions such as anger, fear, hatred, love or affection and jealousy while they can also bear grudges against humans (even some specific one) or other cattle. They can be happy as expressed in the joyful frolicking in the spring after a shower of rain or on being let out of the gate of the feeding pen to which they have been confined for a long period.

Take time off to look at your cattle, learn to appreciate their likes and dislikes. Learn to rejoice with them at the birth of a healthy stocky calf, share their misery and grief. If you do, they will perform better for you. There is a fascinating world of intrigue and romance out in the paddocks where the cattle are allowed to live their lives undisturbed. Observed in their natural surroundings, cattle cease to be senseless animals and become intimate friends, with all too human reactions and emotions.

In 1940, a poem title the Ox-Tamer by Walt Whitman (American poet) was adapted to Ken Shuman. This occurred when Walt Whitman’s great nephew spent a vacation with Ken and Edna Shuman on their farm Grey Craig in the Eastern Cape.

In far-away South Africa, in the placid pastoral region,
Lives my farmer friend, the theme of my recitative, a famous farmer of oxen,
There they bring him the three-year-olds and the four-year-olds to break them,
He will take the wildest steer in the world and break him and tame him,
He will go fearless without any whip where the young bullock chafes up and down the yard,
The bullock’s head tosses restless high in the air with raging eyes,
Yet see you! how soon his rage subsides - how soon this farmer tames him;
See you! on the farms thereabout a hundred oxen young and old,
And he is the man who has tamed them,
They all know him, all are affectionate to him,
See you! some are such beautiful animals, so lofty looking; Some are buff-color’d, some mottled, one has a white lining running along his back, some are brindled,
Some have wide flaring horns (a good sign) - see you! the bright hides,
See, the two with stars on their foreheads - see, the round bodies and broad backs,
How straight and square they stand on their legs - what fine sagacious eyes!
How they watch their temper - they wish him near them - how they turn to look after him!
What yearning expression! how uneasy they are when he moves away from them;
Now I marvel what it can be he appears to them, (books, politics, poems, depart - all else departs.)
I confess I envy his fascination - my farmer friend,
Whom a hundred oxen love there in his life on the farm,
In far-away South Africa, in the placid pastoral region. 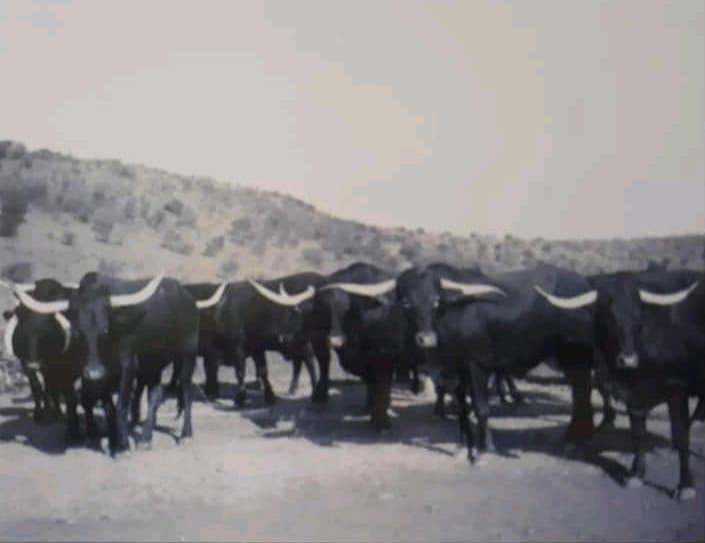 Grey Craig Afrikaner Oxen 1941. These majestic oxen with their exceptional qualities and incredible stamina, gave a distinctive character to the Queenstown district.

In the course of centuries, this beautiful and elegant breed which developed under semi-desert, tropical and subtropical conditions, acquired a certain pattern with regards to its character, habits and qualities; these qualities are definite and distinctive, and have made Afrikaners the useful animals they are today.

Magdalene Morse-Jones is an Historian and Genealogist.