The Old Synagogue in the Gardens 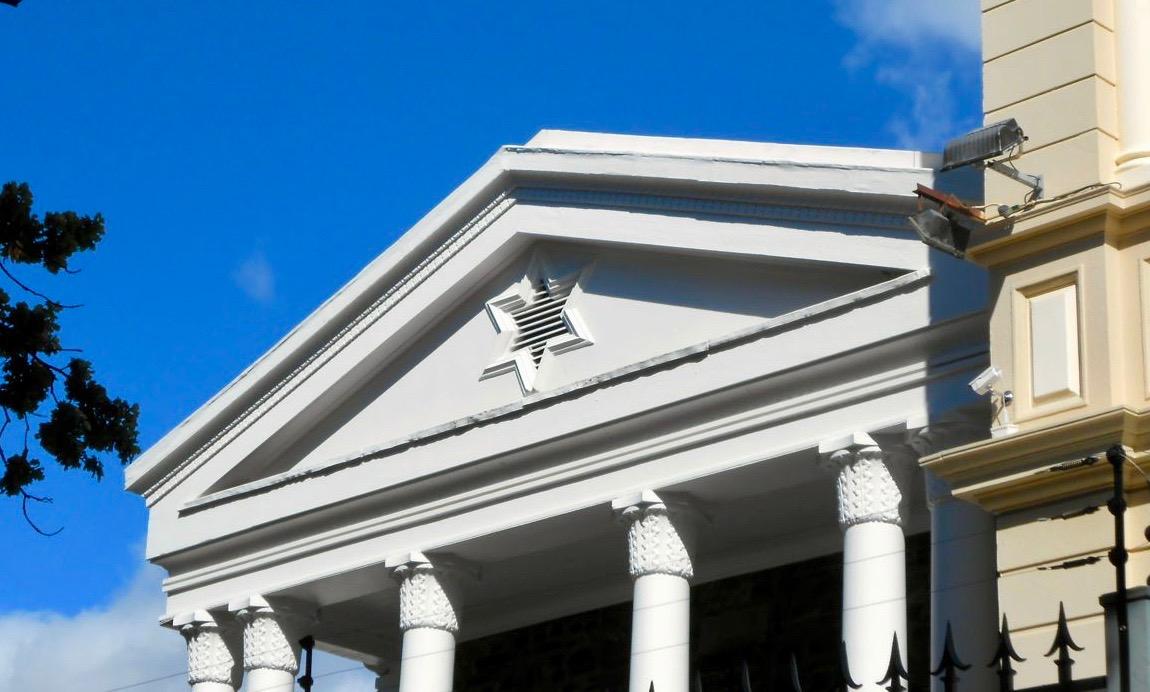 In the article below, Frank R Bradlow looks at the architectural and historical significance of the Old Synagogue in Cape Town. The piece first appeared in the 1980 edition of Restorica, the journal of the Simon van der Stel Foundation (today the Heritage Association of South Africa). Thank you to the University of Pretoria for giving us permission to publish.

In 1866, three years after the consecration of the St. John's Street Synagogue in the Gardens, Cape Town in September 1863, an album of twelve lithographic prints by Thomas Bowler, known as The Pictorial Album of Cape Town, was published. This album had an introduction and text with a written description of each print by William Roger Thomson. Thomson, who was born at Balfour in the Eastern Cape in 1832, was the son of Rev. William Ritchie Thomson, one of the Scottish Presbyterian Church clergymen brought out by Lord Charles Somerset to minister to members of the Dutch Reformed Church. Young Thomson received much of his education in Scotland and became a clergyman in the Dutch Reformed Church. On his return to South Africa, however, he preferred journalism, and was at one time editor of Die Volksvriend. When he resigned from this position, he was appointed by Juta's, the publishers, to edit The Pictorial Album of Cape Town and to write the text.

In his commentary on Plate No. 7 "The Roman Catholic Church", he says:

Not far from the Cathedral, in a quiet corner, almost hid among the trees of the Government Gardens, stands one of the most chaste and characteristic buildings in Cape Town - the Jewish Synagogue. It was erected about three years ago from designs furnished by the late Mr Hogg C E. The style is very peculiar and highly suggestive. The stranger need scarcely ask what the building is intended for, for its character is so distinctly stamped upon it. The Jews in Cape Town and the Colony are not only as active and persevering men of business, as they are all the world over, but some of them who have acquired wealth and station, are among the most liberal, public-spirited, and influential of the citizens.

It is interesting that Thomson considered the style of the building "peculiar and highly suggestive". He obviously considered it suggestive of being a building belonging to a Jewish religious community. In the above quotation, as we have seen, he says "the stranger need scarcely ask what the building is intended for, for its character is so distinctly stamped upon it." Is this in fact so? One wonders whether Thompson had seen many synagogues in other parts of the world. There is in fact nothing particularly characteristic of synagogues in the exterior design of this particular building. 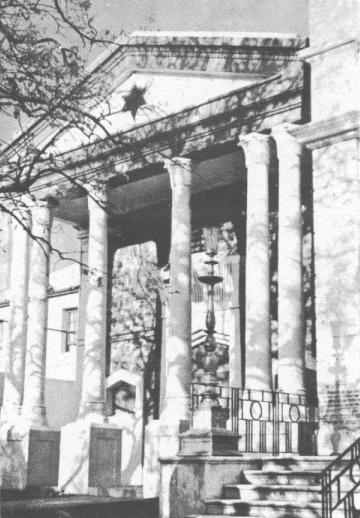 The designer of the synagogue, the civil engineer, Mr Hogg, incidentally seems to have had a singularly inappropriate name for the designer of an orthodox Jewish synagogue.

One of the feautures of this old Synagogue, or St. John's Street Synagogue, as it was called in those days, is that it was built in the so-called "Egyptian" style of architecture, and is in fact one of the three buildings in South Africa in this style. Not far from the synagogue and up the Avenue on the right-hand side is another so-called "Egyptian" building which belongs to the University of Cape Town. This building was completed in April 1841, 22 years before the St. John's Street Synagogue. It is probably well known to people who attend The Little Theatre. In his book The Historical Monuments of South Africa, Professor J J Oberholster says of this building: "Characteristic of the building will be the heavy colonnade of Egyptian columns in accordance with the neoEgyptian style of architecture which was so popular in the 30's and 40's of the 19th century." Professor Oberholster goes on to say: "The Egyptian building has remained unchanged throughout the years, and save for the Gymnasium in Upper-Paarl, is the only building in South Africa of this particular style of building." In fact that is not quite correct because the Old Synagogue is in this style of building, although there is a mixture of classical style as well. The entrance door and the windows are particularly influenced by the Egyptian style.

It may well be asked why this so-called "Egyptian" style was used for this building, and a Jewish visitor to the museum housed in the building today might well find it ironic that an "Egyptian" style should have been used for a Jewish building, considering the role of the Pharoahs in the past and the present role of modern Egypt. It is interesting therefore to know that in Australia an "Egyptian" style synagogue was built in Sydney in 1844.

In their book, Australian Genesis, Jewish Convicts and Settlers 1788- 1850, Rabbi J S Levy and his co-author G J F Bergman, tell the story of the building of the Sydney synagogue, and quote from a Roman Catholic newspaper of the tlme, The Morning Chronicle, which on the 6th April 1844 said: "The building is somewhat in the Egyptian style. It does seem rather complimentary to the memory of the tyrant Pharoah. However, the Jews are well-known to have taste in the fine arts, and it hardly becomes us to give this hasty opinion."

The authors of Australian Genesis comment that the Morning Chronicle "displayed a deeper sense of history than both the architect and the synagogue's selected committee, but they add that "the synagogue was more the product of a Masonic symbolism than Jewish tradition." They also add that "the Sydney synagogue literally set the pattern for Jewish worship throughout the Australian colonies."

Within five years of the dedication of the Sydney synagogue, "the same distinctive 'Egyptian synagogue' style appeared in Hobart Town, Launceston and Adelaide." The Adelaide synagogue was opened on the "high holidays" of 1850, and we are told that "polished cedar pews and bronze chandeliers adorned the simple interior, and the curtain in front of the sacred ark was brightly embroidered with the Hebrew character with the word Adelaide." It is a great pity that we do not have a full description of the interior of the St. John's Street synagogue when it was consecrated on Sunday, 13 September 1863 (Jewish New Year 5623).

St. John's Street Synagogue, as it was then known, today houses the Jewish Museum. It was not the first synagogue in South Africa, or in Cape Town. It was, however, the first building in South Africa to be erected specially as a synagogue. Exactly 14 years before its consecration another synagogue, the Bouquet Street synagogue further down the road, had been consecrated and it was only wlth the arrival of the Rev Mr Joel Rabinowitz from Birmingham that it was abandoned and a new synagogue built. The Bouquet Street synagogue had, of course, not been built for thls purpose, but was a converted house. This synagogue had become dilapidated and Rev. Rabinowitz justifiably felt that a more dignified building was necessary. The new building was, of course, more dignified as we can see from Thomson's description of it as 'a chaste building'. Even today, despite the mixed styles of architecture, it has a certain fundamental dignity. The back of the synagogue has, of course, been altered, but it remains otherwise unchanged.

The importance of the Old Synagogue thus lies in the fact that is was (a) the first structure erected in this country as a synagogue, (b) that it is the oldest existing South African synagogue, (c) that its architectural style is of unusual hlstorical interest, and (d) that it was so closely associated with the establishment and growth of South Africa's oldest Jewish congregation, the Cape Town Hebrew Congregation. It is indeed fortunate that this symbol of Jewish religious worship has been retained. It is the only heritage left from the early days of South African Jewry, and as such its importance both historically and symbolically cannot be sufficiently stressed. It is important that it should be preserved in its present from without alteration, and it is to be hoped that its congregation will agree to its declaration as a national monument. 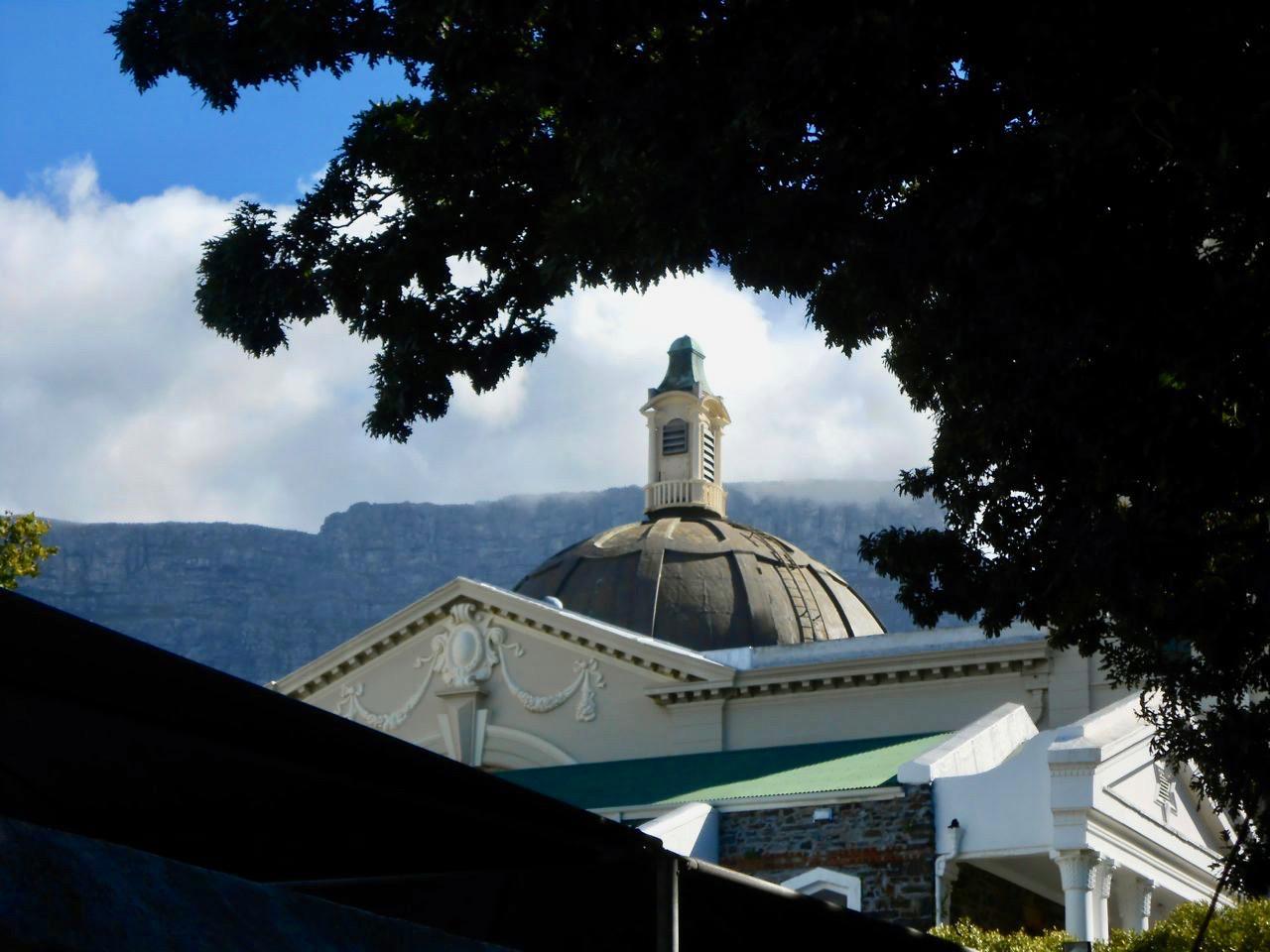 The Old and The Great Synagogues Cape Town (The Heritage Portal)