A Short History of the Pepper Tree 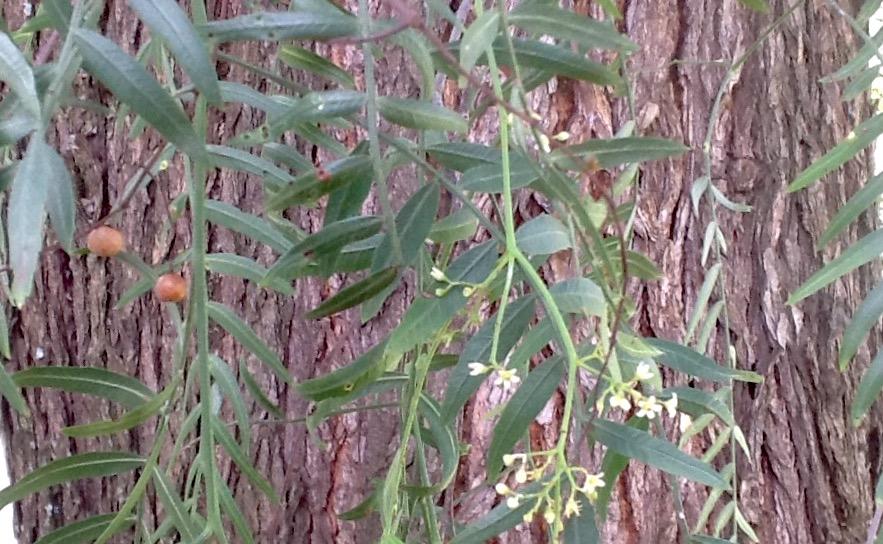 This piece was written on Day 1 of our 21 day stay home in the fight against the Corona virus. I have decided to try to learn something new about our garden and home and to share my writing with Heritage Portal readers during this time of quiet introspection and anxiety. We may discover that the small things within our own multiple worlds matter more than the large events beyond our control.

I photographed the lovely evergreen Pepper tree in a corner of my garden in Observatory, Johannesburg. Its correct name is Schinus Molle (see Photographic Guide to the Trees of Southern Africa by Braam van Wyk, Piet van Wyk and Ben-Erik van Wyk, Briza publications, 2000, page 278). It is also familiarly known as a Peperboom. It is an evergreen tree and so gives pleasure throughout the year. It is large... the height must be about 15 meters (50 feet). It is a tree that gives shade and solace. 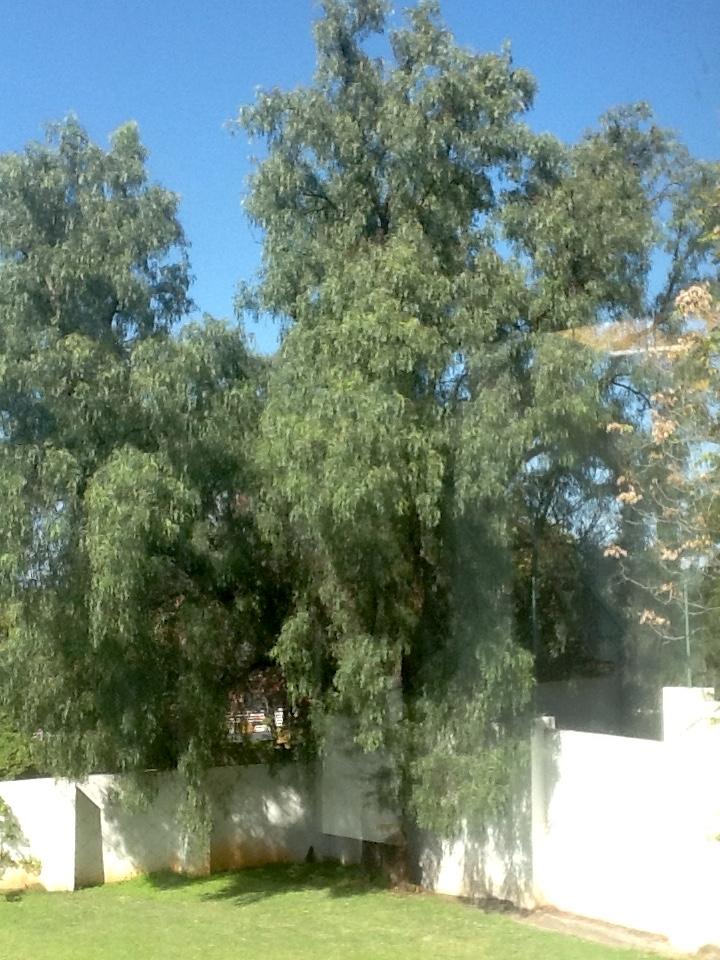 The evergreen Pepper tree in my garden

It is called a pepper tree because it produces small white flowers which then turn into small pink (reddish) fruits. The fruit resembles little red peppercorns which can be used as a pepper substitute but the authorities say not to be eaten in large quantities. In South America it is sold as "pink  pepper corns" and mixed with other black peppercorns. The fruit is small no more than 5 to 7 mm (see main image). 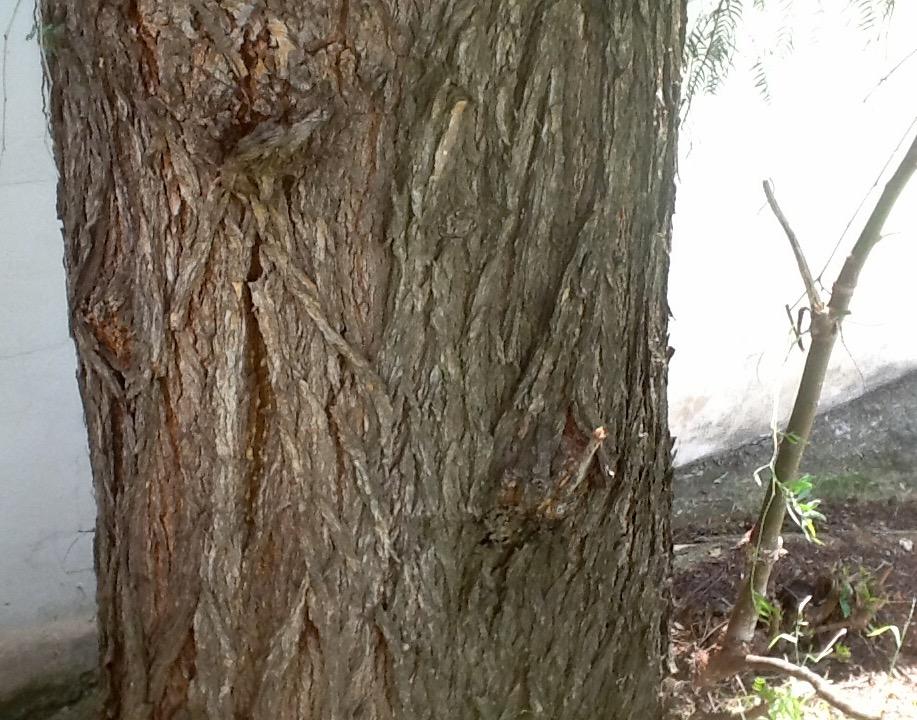 The trunk is gnarled, the bark separates from the wood quite easily and the branches and foliage droop. I notice it is a tree that sheds its branches. I often gather a pile of twig like small branches that have been shed and this makes for a bit of a mess on the lawn. Branches suddenly sprout from the main trunk and I think one could transplant such shoots for a new tree. It's a familiar tree in Johannesburg and there are many old pepper trees. It's a tree that has been in our garden since we arrived over 40 years ago and just keeps growing. It has become a tree viewed with great affection because of its presence, its size and its longevity. In South Africa it is regarded as an invasive species though one is not required to eradicate if the tree is "in possession" and under control. I see no sign of the dreaded shot hole borer in this tree so this could be a species resistant to that blight.

The tree is a very hardy, useful one and has a pungent odour. You will notice the resinous latex on the bark. It is not indigenous to South Africa and was apparently introduced from South America.  It's also a useful tree as the wood can be used in small furniture manufacture. Apparently in South America during the time of the Spanish colonies the strong wood was used for saddles. 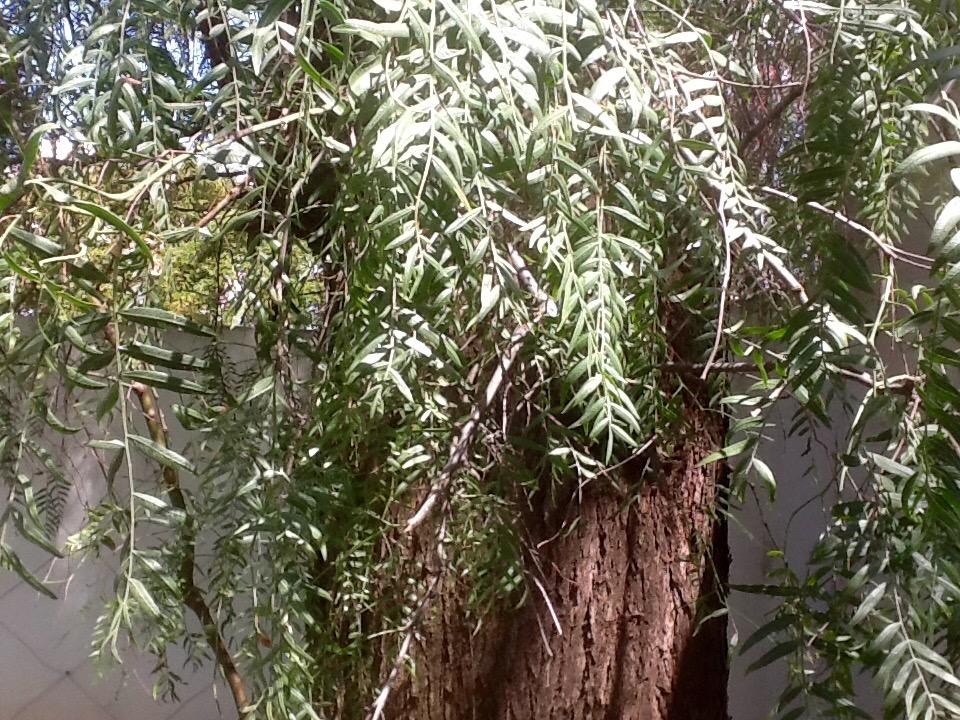 The leaves are small but distinctively elongated

The reason why you will see so many of these pepper trees in Johannesburg, particularly in the older suburbs is because they were often planted near stables for horses and the smell of the tree and its fruit kept the flies away from the horses. Remember for a time in the pre-railway and automobile age, horses were used to pull carts and carriages and we had horse drawn trams ahead of the electric tram. It was a tree that could easily be transplanted or seeded itself and hence its spread on the Highveld and into arid areas. It is strongly drought resistant. It is also said to be a natural pest control which matches the oral history of containing the flies around horses.

There are also medicinal uses for this tree. In traditional medicine in South America it was valued for its antibacterial and antiseptic properties. According to Wikipedia, the fruit of the tree also has antidepressant and diuretic and is said to help with toothache and rheumatism. The leaves are also used for making a green dye for textiles manufacture in the Andes, a use that dates back to pre-Colombian times. I have not gone as far as trying out my own beautiful tree in these various ways.