In the article below, journalist Lucille Davie looks at the epic transformation of spaces across three buildings to form the Wits Art Museum (WAM). The piece is unique as Davie was able to draw from her experience on a behind the scenes tour shortly before WAM opened. The article was originally published on the City of Joburg's website on 6 March 2012. Click here to view more of Davie's work.

Like an excited bride dressed in crisp white waiting for the first organ note to sound before walking down the aisle, the sparkling Wits Art Museum (WAM) is about to be dressed, waiting for its first exhibition in May.

With echoes of the inviting ramps that draw one up into the spaces at the Guggenheim Museum in New York, and to a lesser extent the Hector Pieterson Museum in Soweto, WAM has several levels of galleries linked by similar ramps and a polite staircase or two, giving the museum a stylish fluidity.

WAM takes the space of the former Shell garage on the corner of Jan Smuts Avenue and Jorissen Street in Braamfontein, incorporating the fat columns of the garage, as well as the curved roof, now a voluptuous balcony in the gallery. The university has thrown in sections of two other buildings, giving WAM 5 000m² of space over four floors, half of which will be available to display some of its fabulous collection of 9 000 pieces.

“It’s been a long journey. We are so thrilled that it’s actually happened,” says chief curator Julia Charlton.

The opening exhibition, on 12 May, will consist of 300 to 400 pieces. The exhibition, to be called “WAM! Seeing Stars”, will contain “works that are stars”, she says, with some excitement.

Ideas she and special projects curator, Fiona Rankin-Smith, are playing with for this exhibition are Durant Sihlali’s 1975 “Cocopan pushers, No 6 shaft, Roodepoort Deep Mines”, a watercolour depicting the working experience of miners. “He was one of the pioneers who engaged with the working conditions of black South Africans during the apartheid era,” explains Charlton.

Willem Boshoff’s 1997 “Abamfusa Lawula” or “The purple shall govern” is likely to be wheeled out too. It captures a day in Cape Town in the 1980s when the police turned a water canon laced with purple dye on the crowds, only to have the hose turned around to spray them.

Sam Nhlengethwa’s 1990 “It left him cold – the death of Steve Biko”, is top of the list too, “a celebrity in our collection”, says Charlton.

Carved wooden sculptures, Ndebele beadwork, paintings and drawings from across Africa, representing different eras, cultures and societies, are also being considered for the exhibition.

The journey to WAM was conceived in 2005. Two years earlier a space analysis was done, an effort to locate the best home on campus for the museum. Then a design team was selected through a competition. Once this was complete, the fundraising started in earnest.

Wits chipped in R10-million. Other major donors are Linda Givon, Rick and Caroline Menell, the CJ Petrow Foundation, professor Phillip Tobias, and artist William Kentridge, who donated a work that was auctioned. Three and a half years later R38,5-million was in the bank, and construction started in April 2010.

WAM’s face to the street and Braamfontein is transparent, with huge glass windows titillating passersby’s interest with its double-volume expanse of light and space. 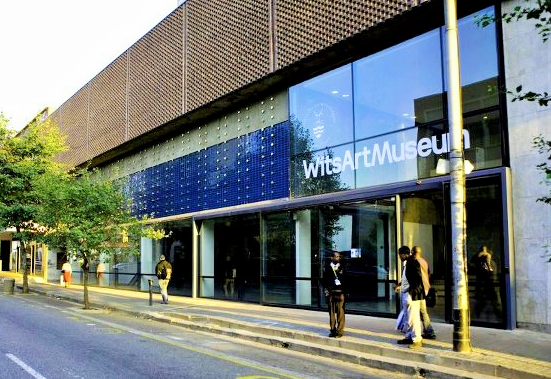 WAM’s face to the street (The Heritage Portal)

The six original garage columns define the space, reaching up into the second floor, creating a natural bond between the two floors. The garage’s curved balcony has become “a reference for our design interventions”, say architects Nina Cohen and Fiona Garson.

This ground floor space will contain a coffee shop, and more durable artworks along its interior wall, not affected by the sun that streams in.

The coffee shop will draw students and the public into the museum. But already there is a constant flow of students through the foyer up into the building for lectures, bringing a buzz to the space before it opens.

But it is behind these spaces that the real action will take place. Here a double-volume gallery is complete, with a hint of the curves in the front, in the ceiling and edging of the ramps, a contrast to the square columns. Recessed lighting under ceiling lips illuminates the walls, complementing the glow from the numerous spotlights. 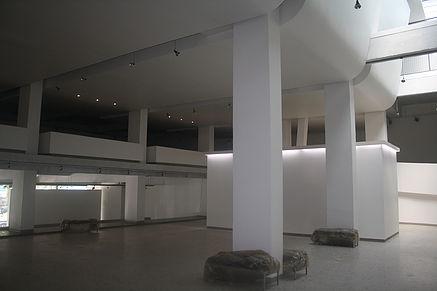 The ramp leads up to a large exhibition space, the favourite space of William Kentridge and David Goldblatt, she adds.

The surprise discovery of two basements not in the building plans was welcomed – they have been converted into exhibition space, with the same defining columns. The space is in the final stages of being waterproofed.

Behind the galleries are the neat storerooms, now being packed with the months of carefully wrapped artworks. Charlton points with pride to the acid-free cushioning that cradles the small items like pipes and wooden combs.

There is also space for the research, teaching and administrative functions of WAM.

The architects found that linking three separate buildings was a challenge. Their aim was to create a “seamless flow” between the spaces, which they have done with flawlessly.

The inspiration for their design lies in two areas. “Firstly, the siting of the project on the edge of campus allowed us to link the museum and therefore Wits to Braamfontein,” says Garson. 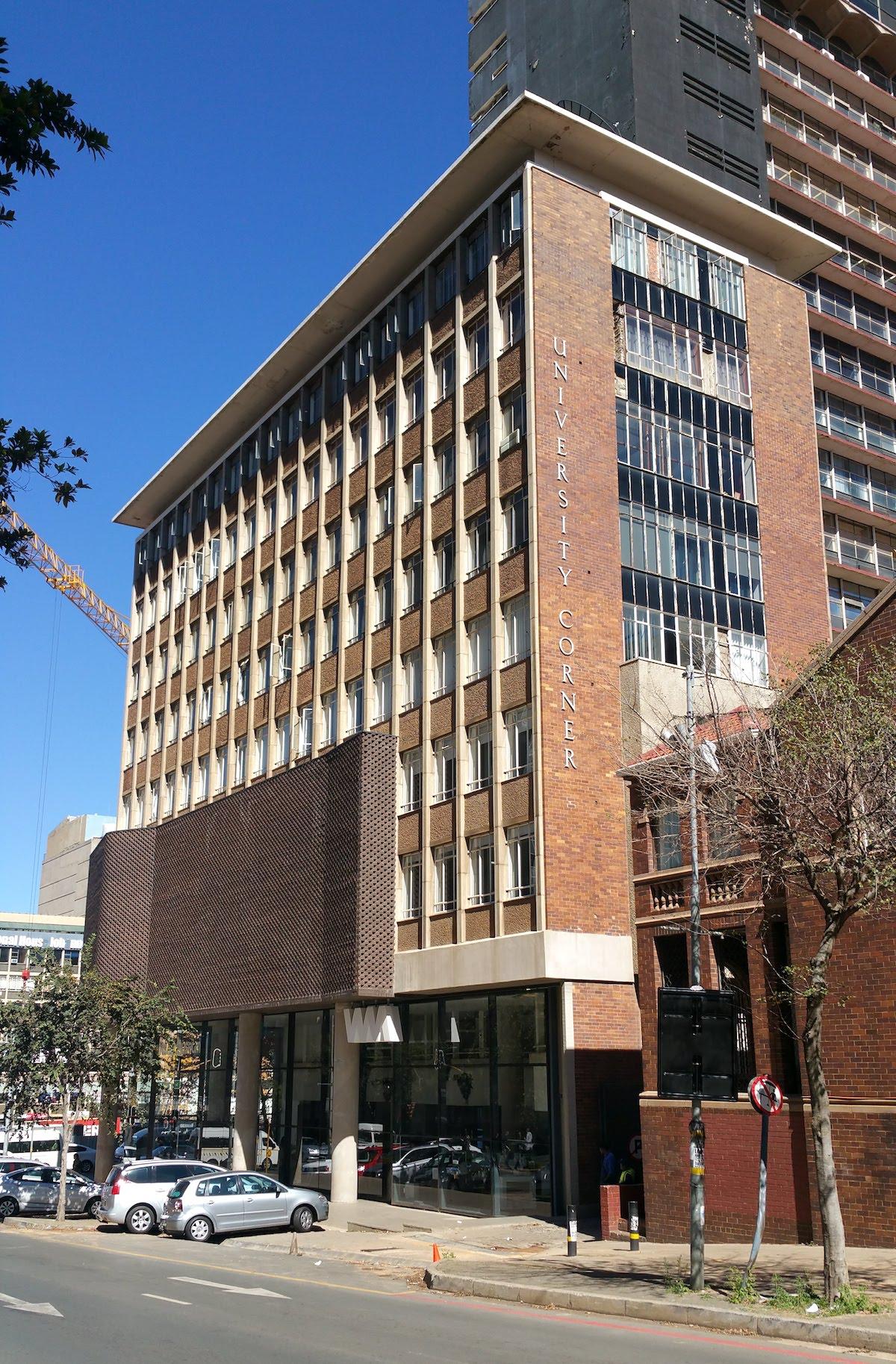 “Our intention is to allow the public to directly engage with the museum through a public forecourt and glass facades into the museum exhibition spaces from street level.”

And secondly, “giving expression to the stores which house the Museum's vast treasure of African and other art”.

The exterior walls of these stores on the second floor consist of three-sided bricks, giving the impression of a woven texture, echoing the rich textures of baskets and beadwork in the collection. “The brick makes reference to the brick buildings of Johannesburg as well as echoing the textures of African craft. The extra brick skin also contributes to efficiency of the optimally controlled climate for the storage of the collection”, says Garson.

Wits and the architects have tried to be green-friendly. Besides the footprint of the petrol garage in the columns and balcony, sparkling blue tiles in the entrance foyer and along sections of the outer wall, inlaid with metal pegs from louvres which have been removed, have been retained. Brass discs have been added to the pegs, reminiscent of elements of beadwork in the collection.

Old chairs and benches have been refurbished, and give the gallery a trendy retro feel.

This recycling of furniture was partly motivated by funding restrictions, admits Charlton. But the discipline of the restriction was a good exercise, she concedes.

It was a good discipline for the architects, too. They say that a reduced budget and “the necessary ‘value engineering’ that followed allowed us to distil the design and give clear expression to the core design principals”. And those design principals were connecting Wits and the museum to the city, and ensuring the protection of the collection, in particular behind the “brick skin”.

Some aspects were not compromised though. The goods lift was the most expensive item, says Charlton, while the climate control mechanism is world class.

A unique feature of the conversion was that the building contractors were brought on board before the architects were finished with their designs. This meant that the contractors’ input was incorporated into the design, reigning it in a bit but producing a result that everyone is happy with.

“It has been a design choice, not only a cost issue. We have fallen in love with what we have,” smiles Charlton.

Standing behind the glass facing on to Jorissen Street, with its bustling traffic and constant stream of pedestrians, the museum exudes tranquillity. “It’s a calm space. It is conducive to display and artwork,” she adds.

And when asked what gives them the most satisfaction with the finished product, Garson says: “The public interaction with the building and the expressive brick container.”

And as an added bonus, Garson and Cohen have just won the architecture category in the Absolut VISI Designer of the Year awards for WAM held in Cape Town last week. 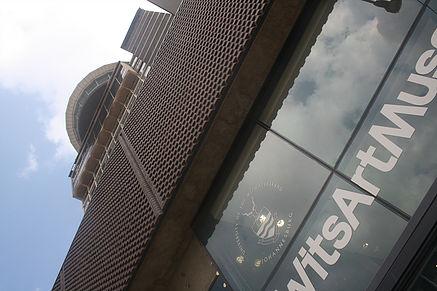 Portion of Wits Art Museum from below (Lucille Davie)

Wits’s art collection goes back to the 1920s, when the anthropology department starting collecting African art pieces for its ethnography teaching. It consists of some of Africa’s rarest and finest artworks.

Its Fine Art collection began in the 1950s, collected for teaching purposes. In 1972 the late art collector Gertrude Posel donated money to the university, to be used for acquiring contemporary art.

Wits started its first art gallery in Senate House in the early 1970s in the space occupied by the present coffee shop in the Senate House concourse. Two further small galleries were added nearby, one created from money left by Posel. This is the core of what will make up the content of WAM.

Since 1978 Wits University and Standard Bank have collaborated in acquiring art. With a budget supplied by the bank, Wits has undertaken to purchase and administer the African art collection, at the same time using it for education. The collection is jointly owned by both institutions. Private donors have over the years also contributed to the collection.