Remarkable photographs of a 1970s trip through South West Africa 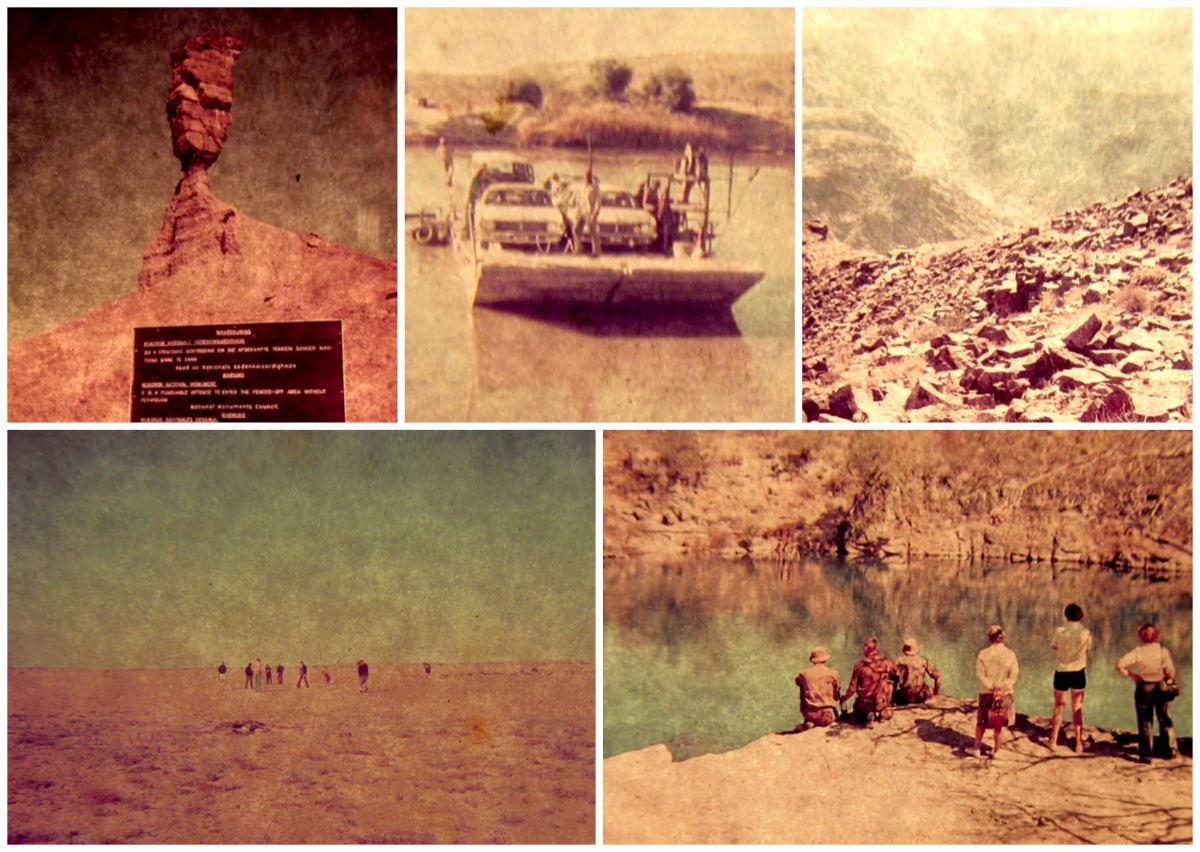 Once again, I travel with the late Denis James Strever and his friends and family back in time, to a trip they made to South West Africa (now Namibia) in 1977. This is the third article I’ve written using Denis Strever’s colour photographic slides to travel with him (click here to see photographs of the Kruger Park that haven't been seen for half a century and here for old photos of the Royal Natal National Park Hotel). Many of the colour slides (Agfacolor) have changed colour towards purple and magenta because of their age (50 years) and I’ve adjusted some of the photographs to sepia to enhance their appearance. Some of the interesting aspects of these photographs, kept in cardboard boxes in a spare room for fifty years, include the cars, the 1970s clothing, the many picnics in the shade of skimpy trees, as well as the scenic places visited. 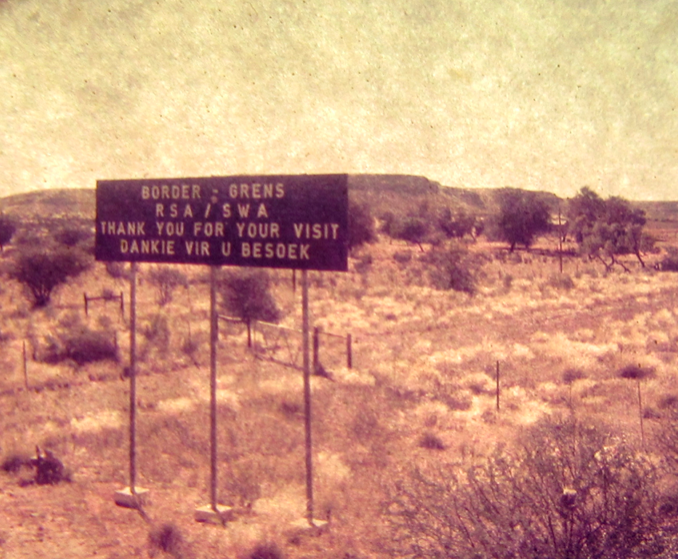 What has struck me the most is that this was a very ambitious trip. The four ordinary sedan cars left Durban and probably travelled via Bloemfontein and Kimberly to Upington and onto Augrabies Falls National Park (see maps below). Then, across the border into South West Africa (Namibia) at Sendelingsdrift and the drive to the Fish River Canyon view point and the Ai Ais tented camp. The first part of the journey alone must have taken five or six days with overnight stops along the way, and covered a distance of some 1745 km. Then from the Fish River Canyon to Etosha Pan was another drive of 1012 km, excluding any side trips, meaning that the total outward trip was 2757 km and the same back home again, a total distance of 5514 km. There is no record now of how long the trip took. Also, in the 1970s, the major motorway systems were not in place, so a slow journey all in all.

The journey to the then South West Africa

Another aspect that was interesting is that the convoy of four vehicles did not take any ‘conquer those tough landscapes’ camping trailors full of sophisticated equipment, fridges, and jerry cans of fuel and water, as we probably would now. Also, this was in the day of no cell phones, so it would be a real problem if one of the cars broke down. But this was how they did things back in those days, just with ordinary cars. Back then, there were no ‘One Stops’ along the South African and South West African (now Namibian) motorways (and no national motorways) and seeminly it was considered prudent to take along one’s own provisions and have picnics.

The photos of the many picnic stops show that the boot of each car was filled with cooler boxes, thermos flasks and glass bottles of Coca Cola – rather than solar powered GPS devices and Weber braais. There were also no small luxuries like camping chairs or umbrellas, it seems. And they really did stop at those concrete roadside ‘mushrooms’ as we used to call them.

Over-night stops on the long trip were at national parks or resorts, all booked using telephones and letters, and sending deposit cheques in the post, rather than booking online (this was all before the internet and email), with full payment required immediately to secure the booking! 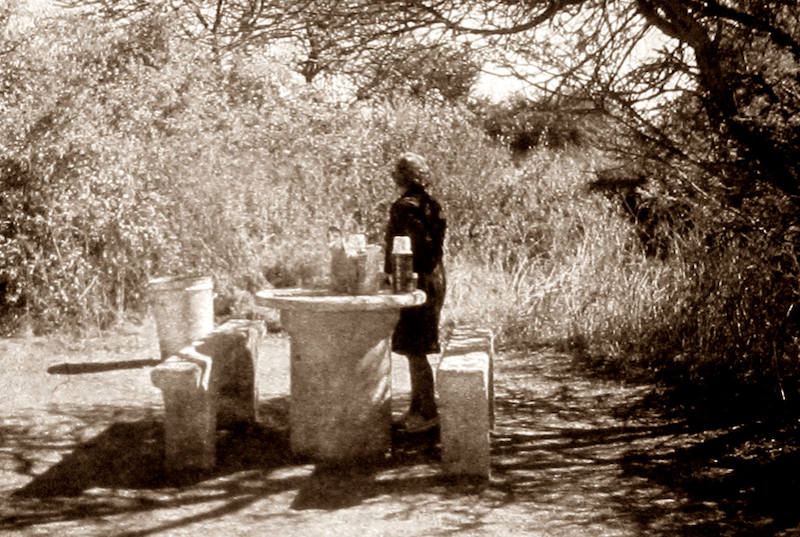 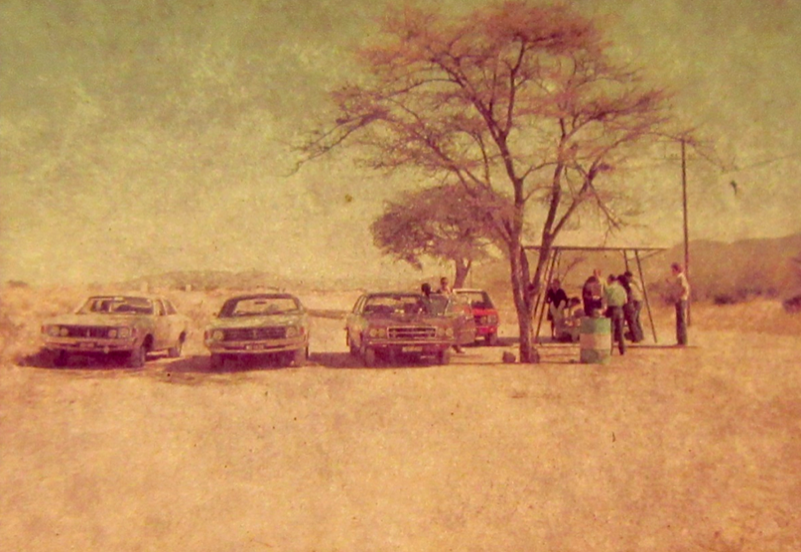 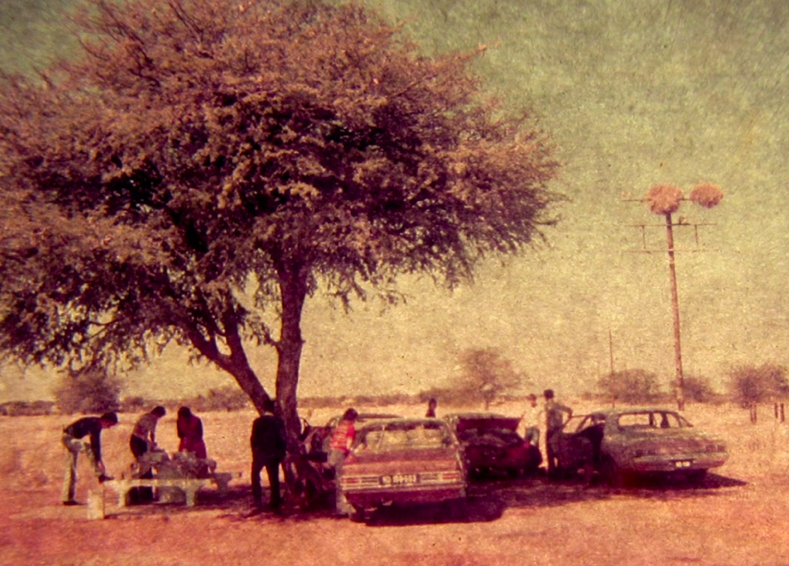 Another picnic with four cars and one tree somewhere in South West Africa (Namibia). Note the Social Weaver nests in the telegraph pole. These birds build large compound nests, a nesting activity not commonly found among birds. (Denis Strever)

No outdoor apparel industry yet – only ordinary clothes

The group wore their ordinary clothes and didn’t resort to fasionable ‘outdoor gear’. The outdoor industry could not have been underway at that point, supplying upmarket and trendy gear for those outdoor moments. On this 1977 expedition, the men wore their everyday shorts, bell-bottom jeans and button up shirts, and the young women wore the same type of jeans and shirts or stretchy tops. The older women wore a dress and cardigan with sensible shoes. My mother used to dress like that!! 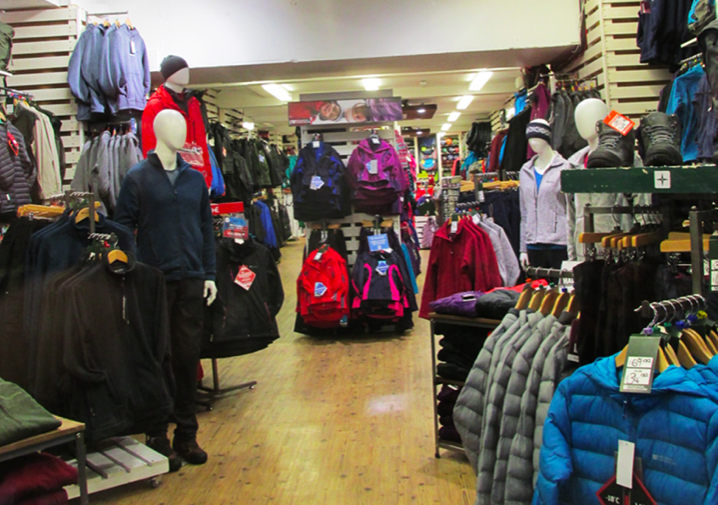 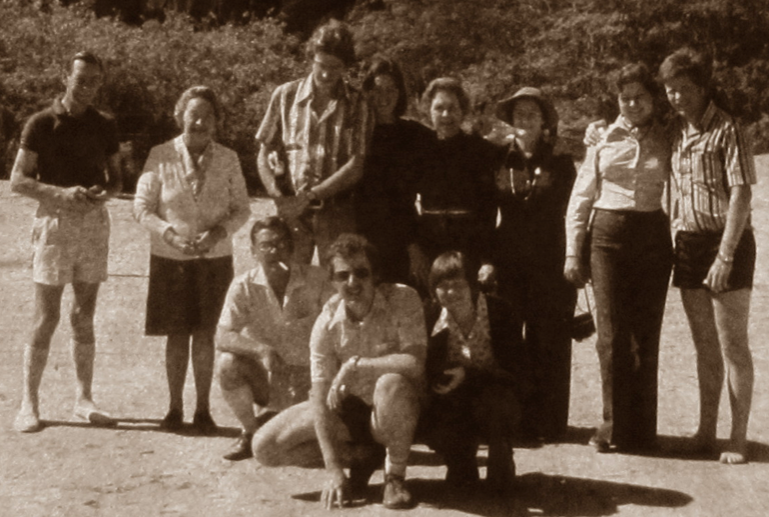 The group of family and friends who undertook the arduous SWA trip in 1977. Note the everyday clothing worn for this major expedition into the arid world of South West Africa (Namibia). (Denis Strever)

After driving from Durban, the group of family and friends crossed the border into South West Africa, seemingly via the Sendelingsdrift ferry crossing, and then onto the Fish River Canyon and beyond. Sendelingsdrift is a border post between Namibia and South Africa in the Richtersveld National Park. The ferry still carries vehicles across the Orange River at 150 ZAR per vehicle (Wikipedia 2021).

Waiting in the queue to cross the Orange River at the Sendelingsdrift ferry - Denis Strever - 1977.png 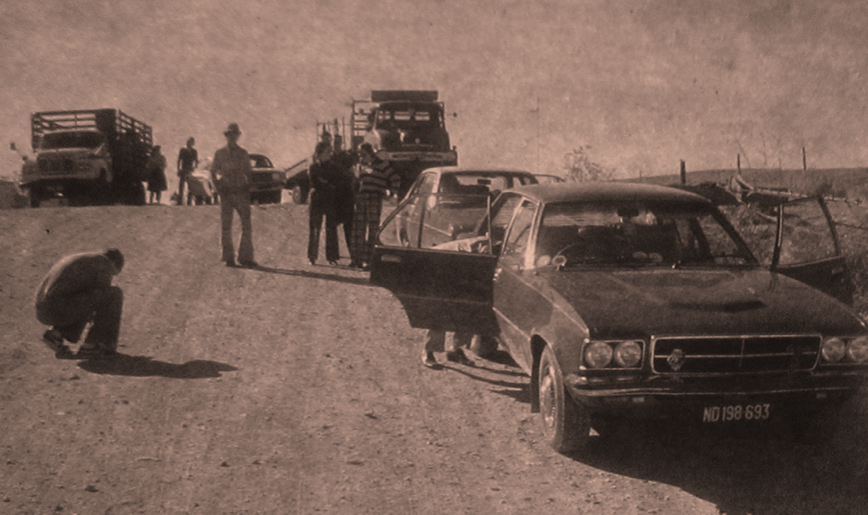 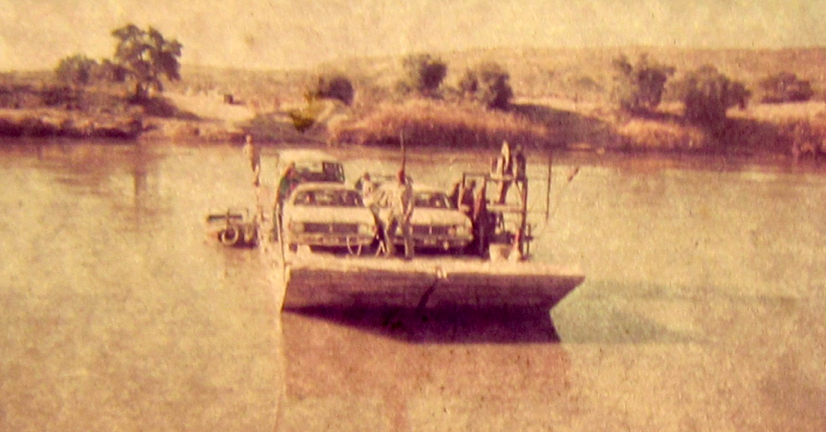 Crossing with the ferry at Senderlingsdrift, the border between South Africa and Namibia (then South West Africa). This ferry is still operating and no bridge has ever been built here. (Denis Strever) 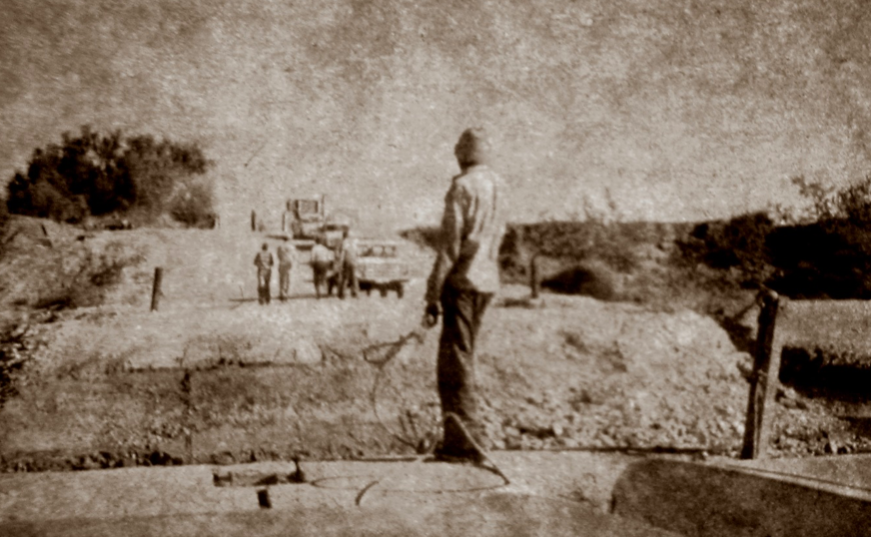 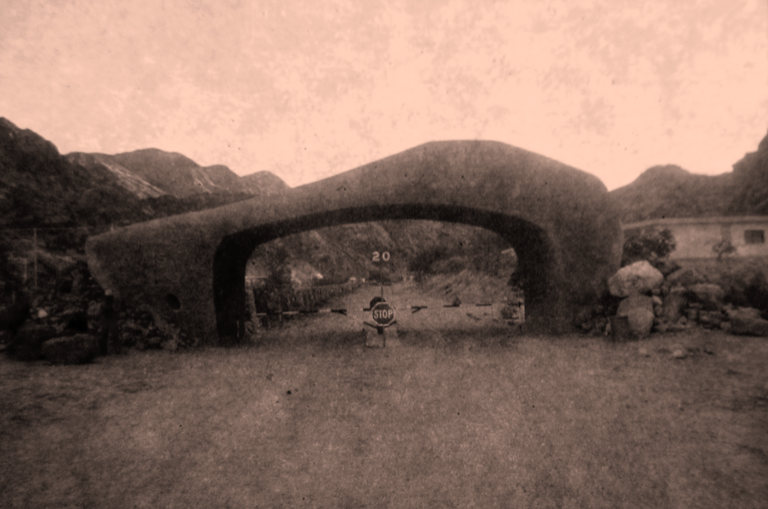 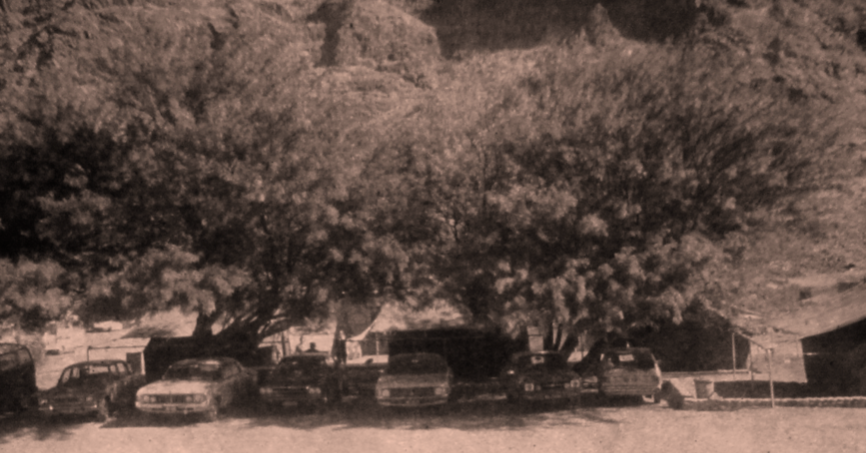 The tented camp at Ai Ais, Namibia, 197. This facility is much more upmarket now, making very good use of the hot springs of this area (Denis Strever) 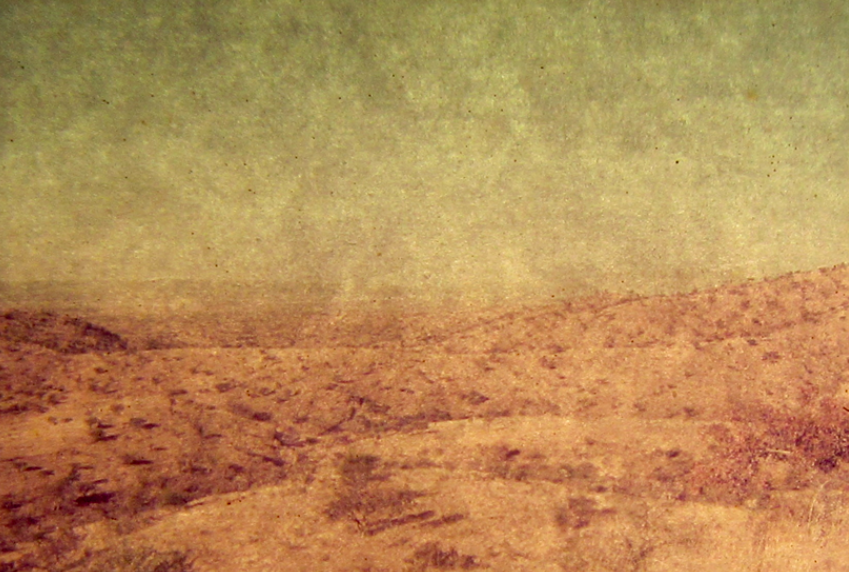 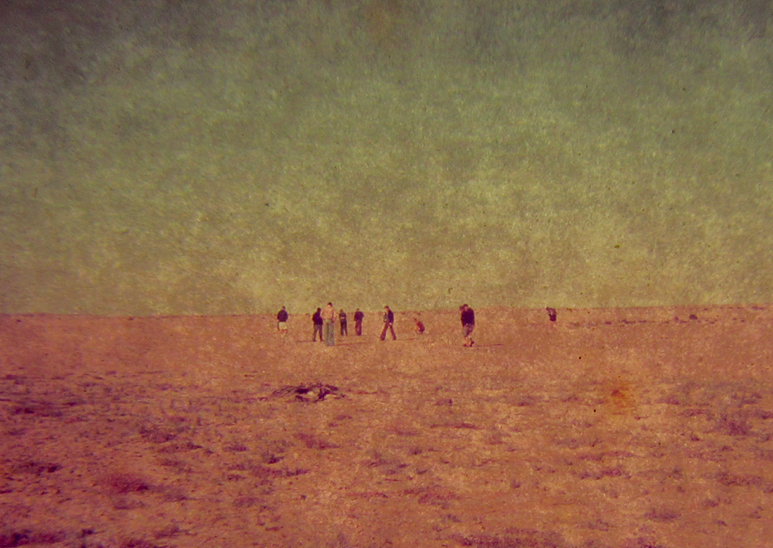 No trip to Nambia would be complete without seeing Welwitschia mirabilis growing in the wilderness of the Namib Desert. Above, the Strever group exploring the landscape for Welwitschias, 1977. (Denis Strever) 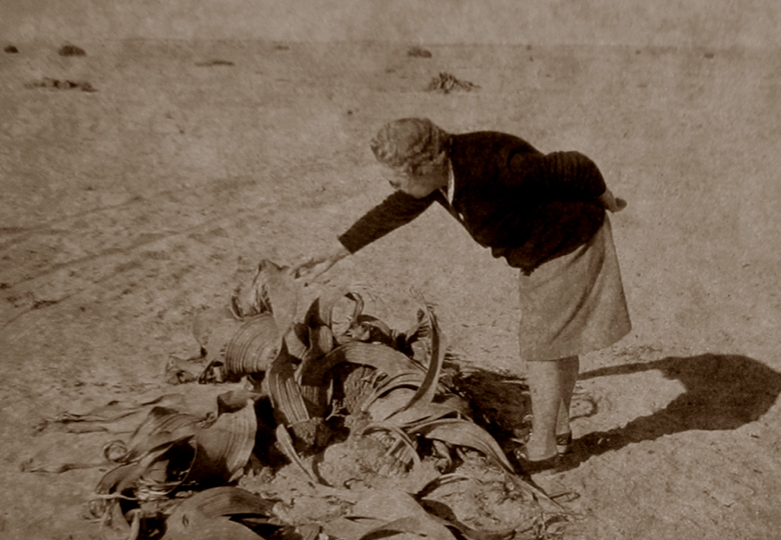 Admiring the remarkable Welwitschia mirabilis which is actually a conifer and bears cones, and is endemic to the cold coastal desert zone of Namibia. (Denis Strever) 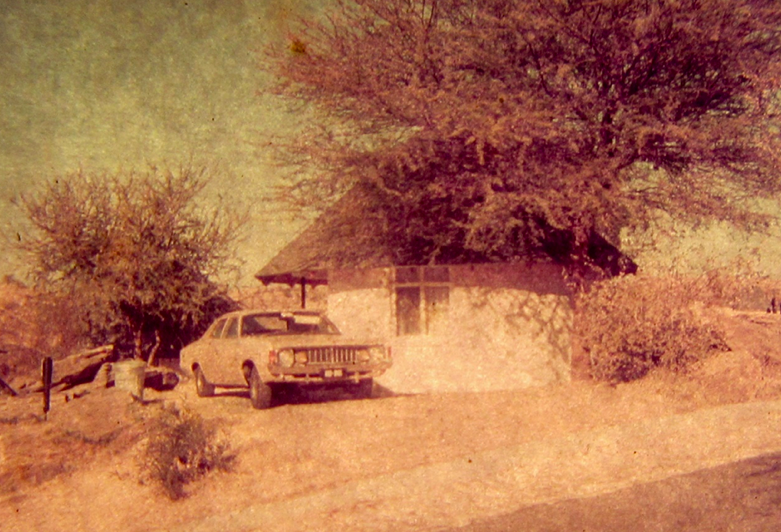 The huge rock formation fell down in 1988. The rock was estimated to weigh about 460 tonnes. A local omen said that when the rock fell, the white people would disappear. The rock formation collapsed on 7 December 1988 and Namibia gained independence in February 1990, so there may have been some truth in the prophesy. 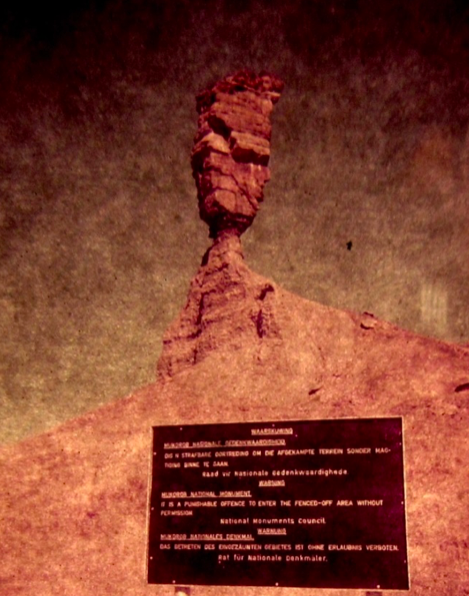 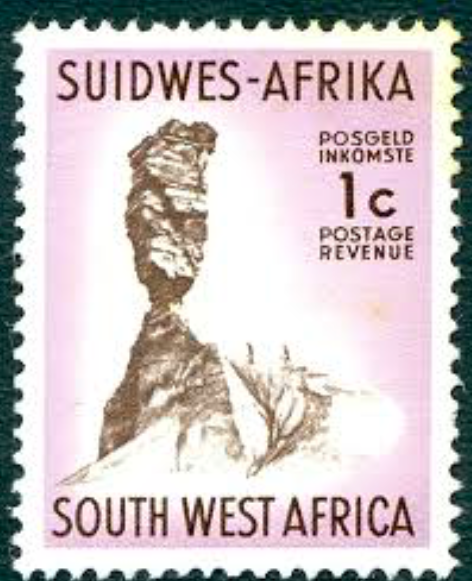 Amongst Denis Strever’s photographs were photos of an enigmatic lake with green water, but the images were very faded. Luckily there was another photograph of a sign that said ‘Lake Otjikoto National Monument’ so I knew which lake to Google to get more information. Lake Otjikoto is a sinkhole that collapsed several hundred years ago and may be connected via karst formations underground to Lake Guinas, another sinkhole lake about 20 km away. This locality of both these freshwater lakes is in the northern area of Namibia, near the town of Tsumeb and near Etosha Pan. Lake Otjikoto was declared as a national monument in 1972 in South West Africa (now Namibia). 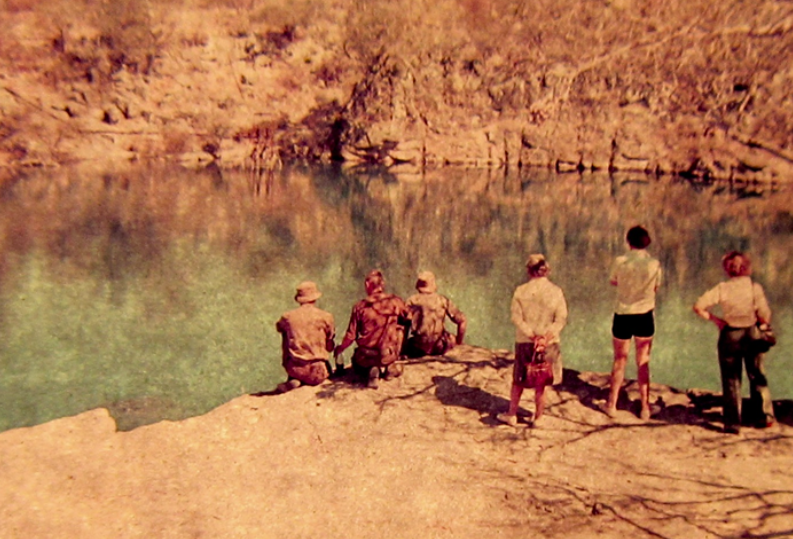 Monty Hall’s YouTube video of his expedition to seek lost treasure using modern diving exploration in this very deep lake, is worth watching (click here to view). He explains how the end of German occupation of South West Africa in the First World War is linked to this lake. The defeated German army dumped their cannons and other armaments in the lake to stop them falling into Allied hands. They also dumped a mysterious safe (seemingly never found) that was supposed to contain a fortune in gold coins. German cannons recovered from the lake were restored and are housed in a small museum in Tsumeb. 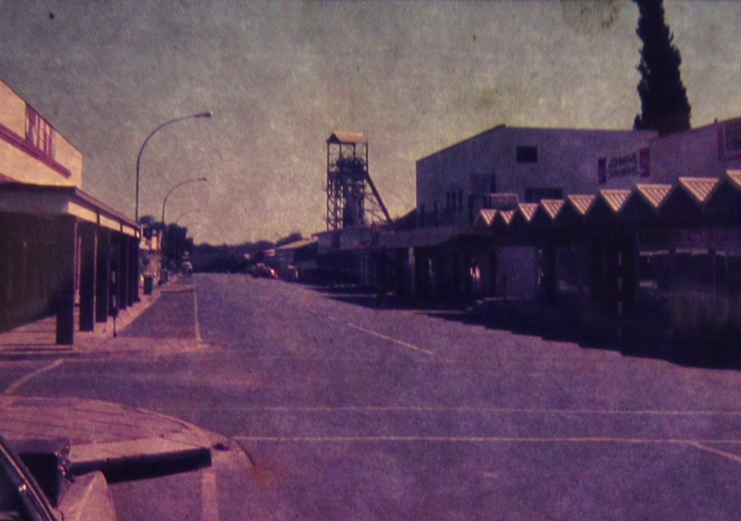 The main street of Tsumeb back in the day, 1977. The structure in the background is the disused De Wet shaft dating from the days when Tsumeb was a copper mining town.  The history of this mining town would be interesting to explore. (Denis Strever)

The Fairy Tale Forest (sprokieswoud) is a section of Etosha National Park in Kunene Region, Namibia, and is an open forest of Moringa ovalifolia (the "Fairy tale trees"), and is the largest concentration of Moringa ovalifolia in the world (Wikipedia). The tree species is widely distributed in Namibia from the escarpment northwest of Keetmanshoop to the Kaokoveld in the north and further into Angola. Its habitat consists mainly of desert or arid savannah vegetation (SANBI website). 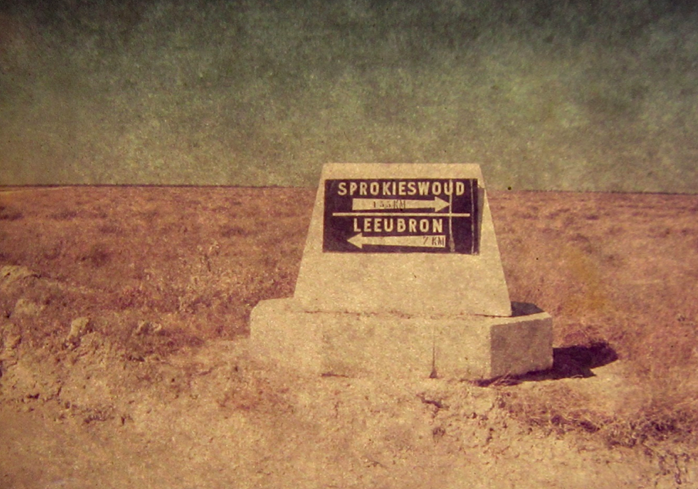 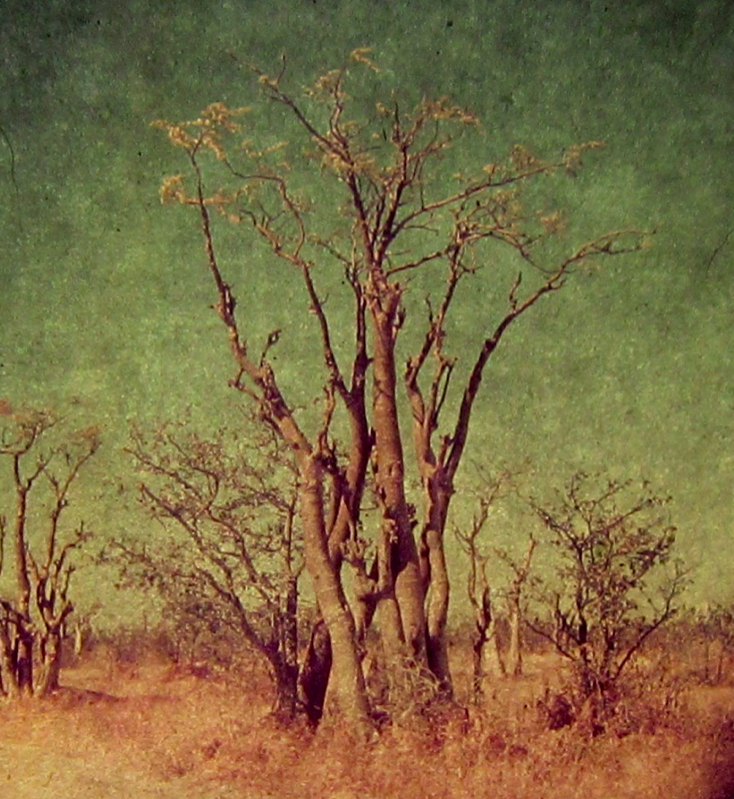 About the author: Sue Taylor holds a PhD in Plant Biotechnology from the University of KwaZulu-Natal, South Africa. Her current interests encompass cities and urban greening, material culture (trash), degraded peripheries and researching the disintegration (and rehabilitation) of landscapes and buildings. She is currently a Research Fellow at the Afromontane Research Unit, QwaQwa, University of Free State (South Africa).