Many registered trademark ephemera of yesteryear have collectors competing at auctions, markets and antique fairs to find that one elusive, or previously unidentified item for their collections.

On such trademark is Kodak. Registered as a trademark during 1888, Kodak, which was also present in South Africa some years later, undoubtedly was one of the more successful brand names within both the history of marketing and photography.

This article focuses primarily on Kodak film wallets containing the “Kodak Girl” dating from between the 1910s and 1960s. These “insignificant” film wallets are usually found in boxes containing unwanted photographs of the past. 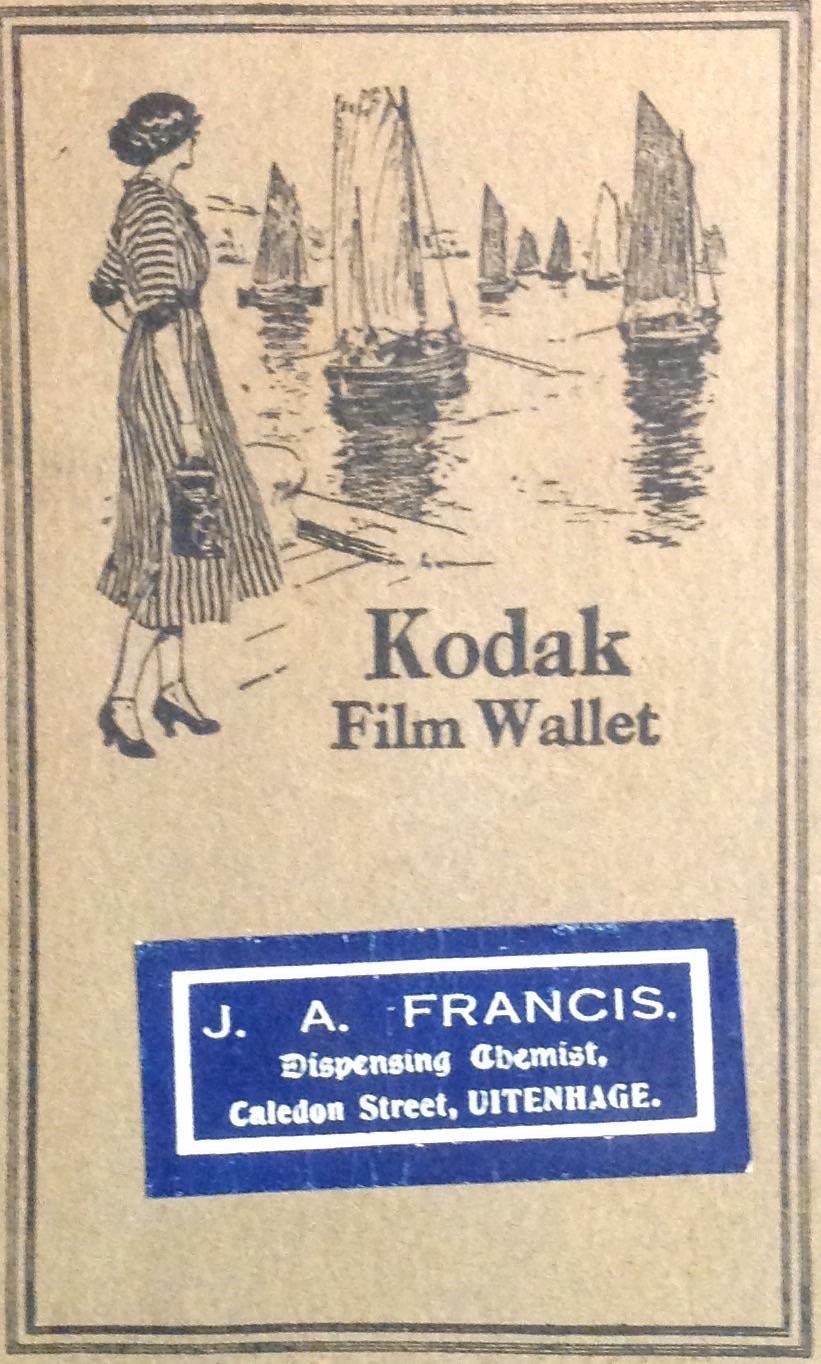 At the harbour - Lady in her striped dress with a Kodak bellows camera. Another Film wallet as presented by Photographic Chemist JA Francis based in Caledon Street, Uitenhage. Circa 1920 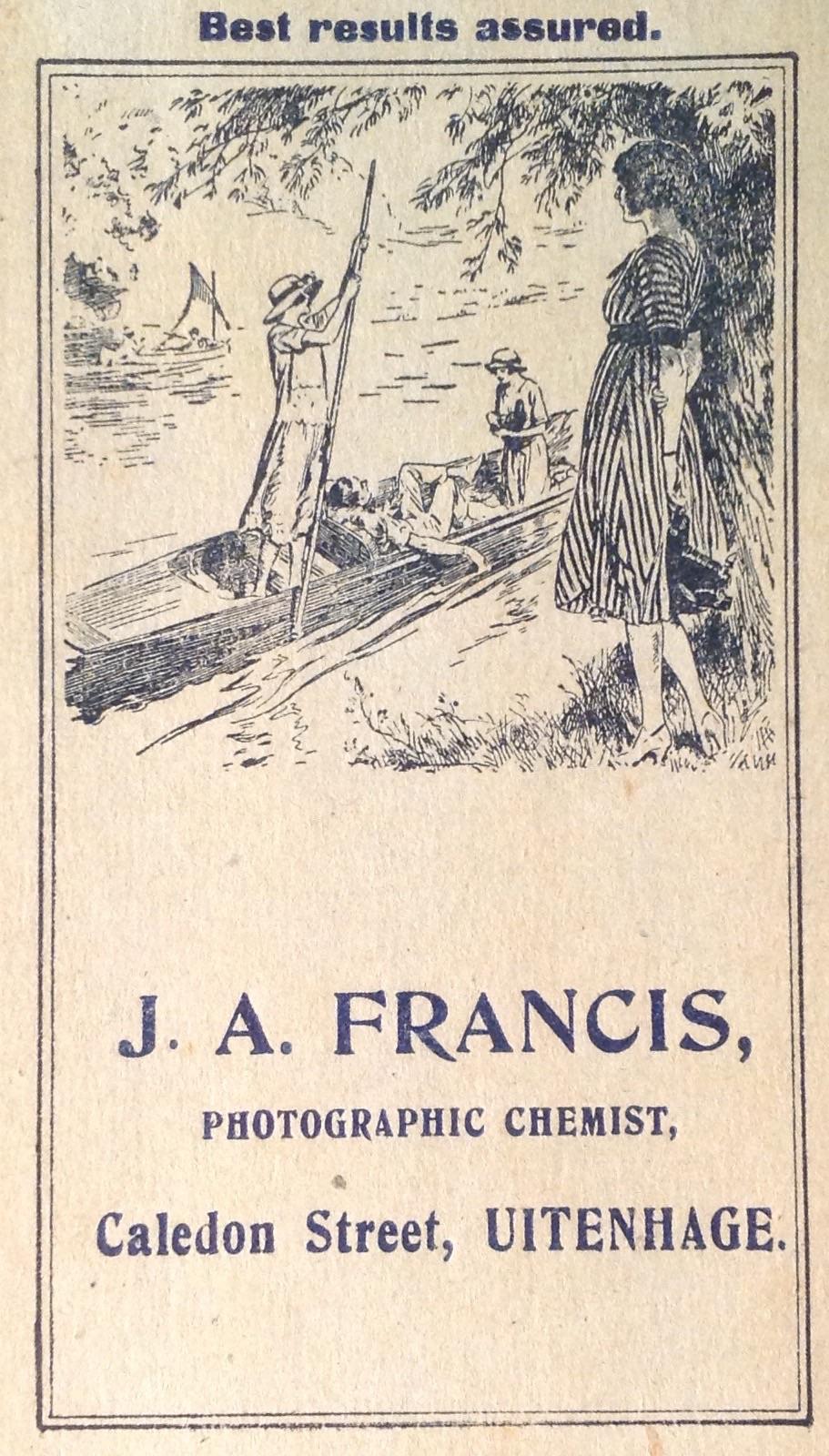 Lady in her striped dress holding a Kodak bellows camera behind her back. Not a typical South African scene, confirming that these wallets were mainly imported from abroad. This film wallet with its content was presented to the customer by Photographic Chemist JA Francis based in Caledon Street, Uitenhage. Circa 1920s

Children capturing insects being photographed by Kodak lady in her striped dress via Carol Hardijzer.jpg 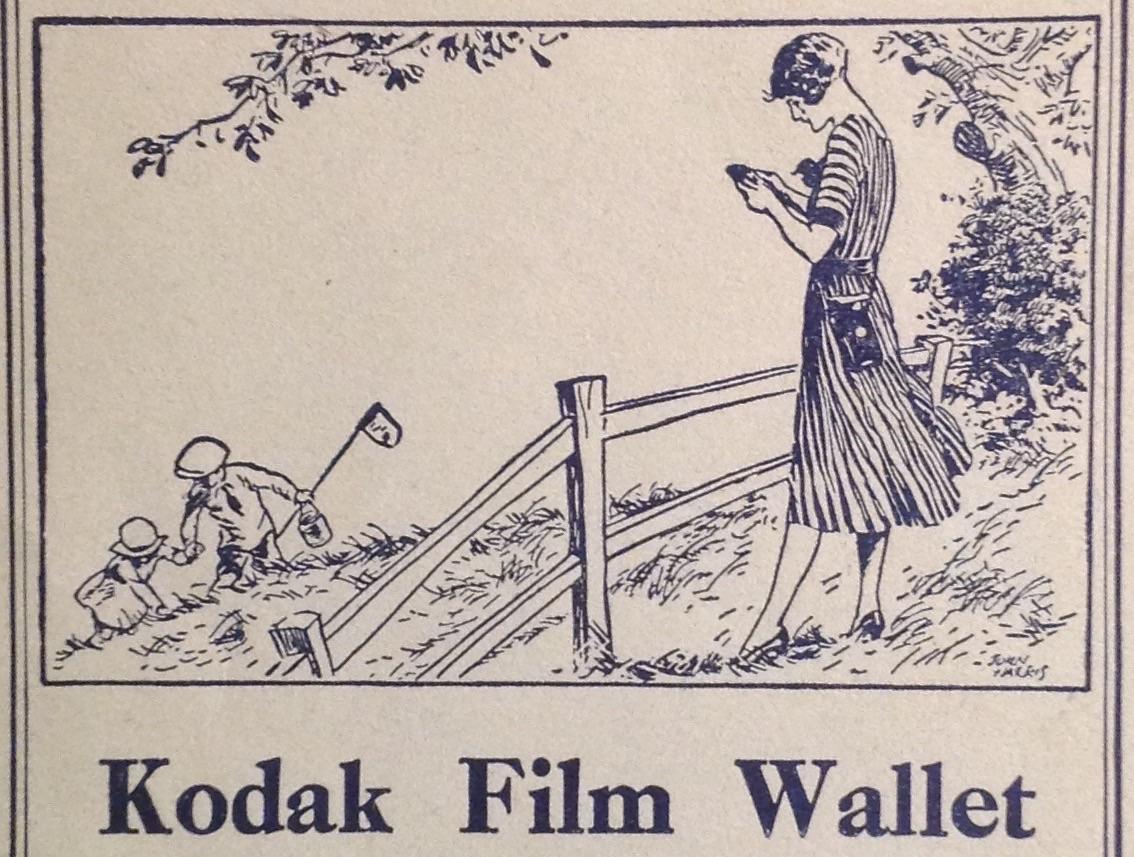 Children capturing insects being photographed by lady in her striped dress. Note the artist's signature in the bottom right hand corner. Wallet has Durban regional offices details printed on the back. Circa 1920s

But what was the purpose of the film wallets and where did they originate from?

Once a spool of film was ready to be developed, the photographer would take the spool to the developer (mainly chemists in the earlier years), who would then either develop the film on their premises or forward the spool to specialist developers. Developed photographs and their negatives were then placed in these beautifully designed film wallets. 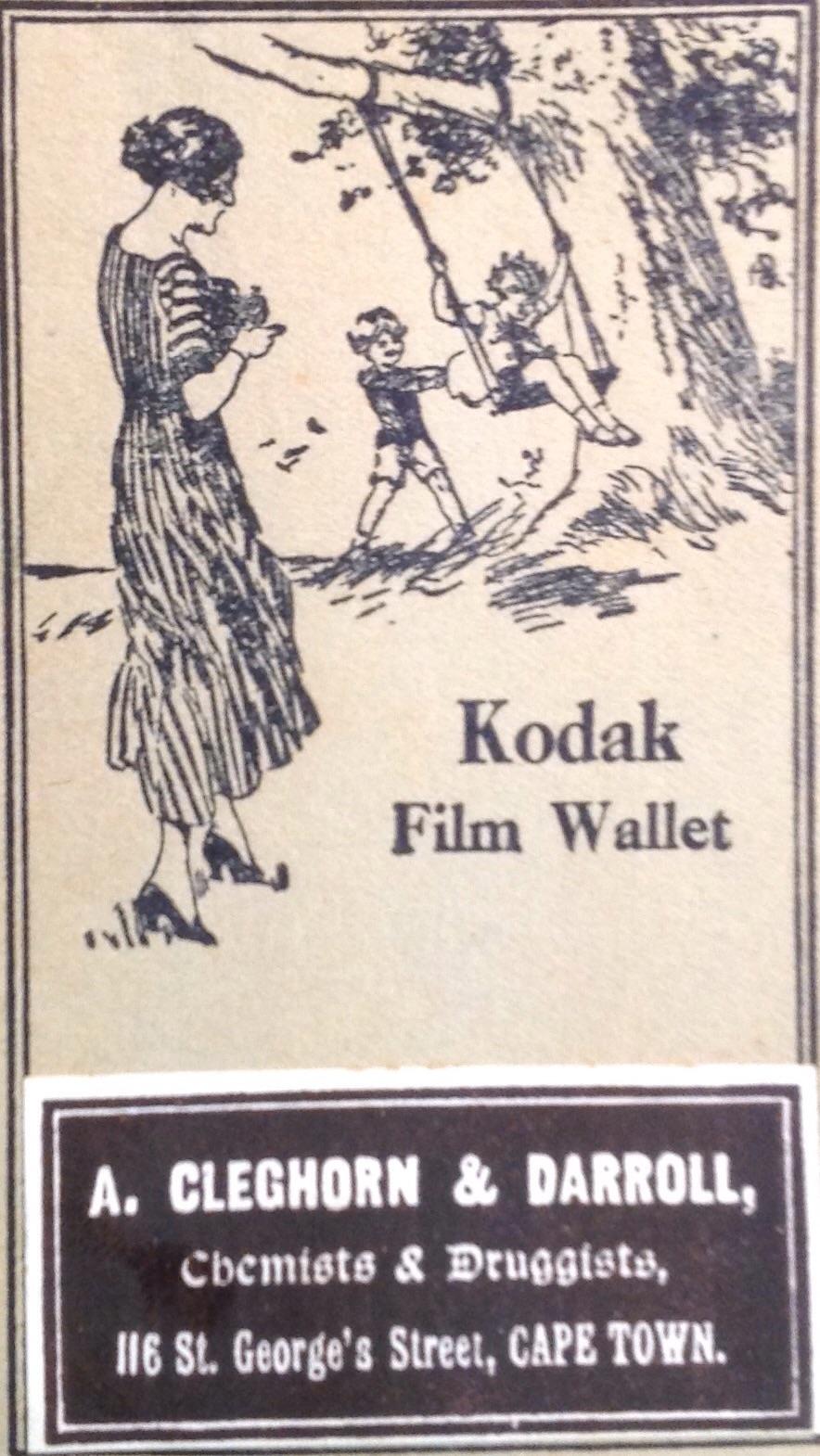 Lady in her striped dress photographing children at play with a Kodak bellows camera. Film wallet as presented by Chemists and druggists Cleghorn & Darrol based in 116 St. George’s Street, Cape Town. Circa 1920s

Film wallet as presented by the Koedoe Pharmacy via Carol Hardijzer.jpg 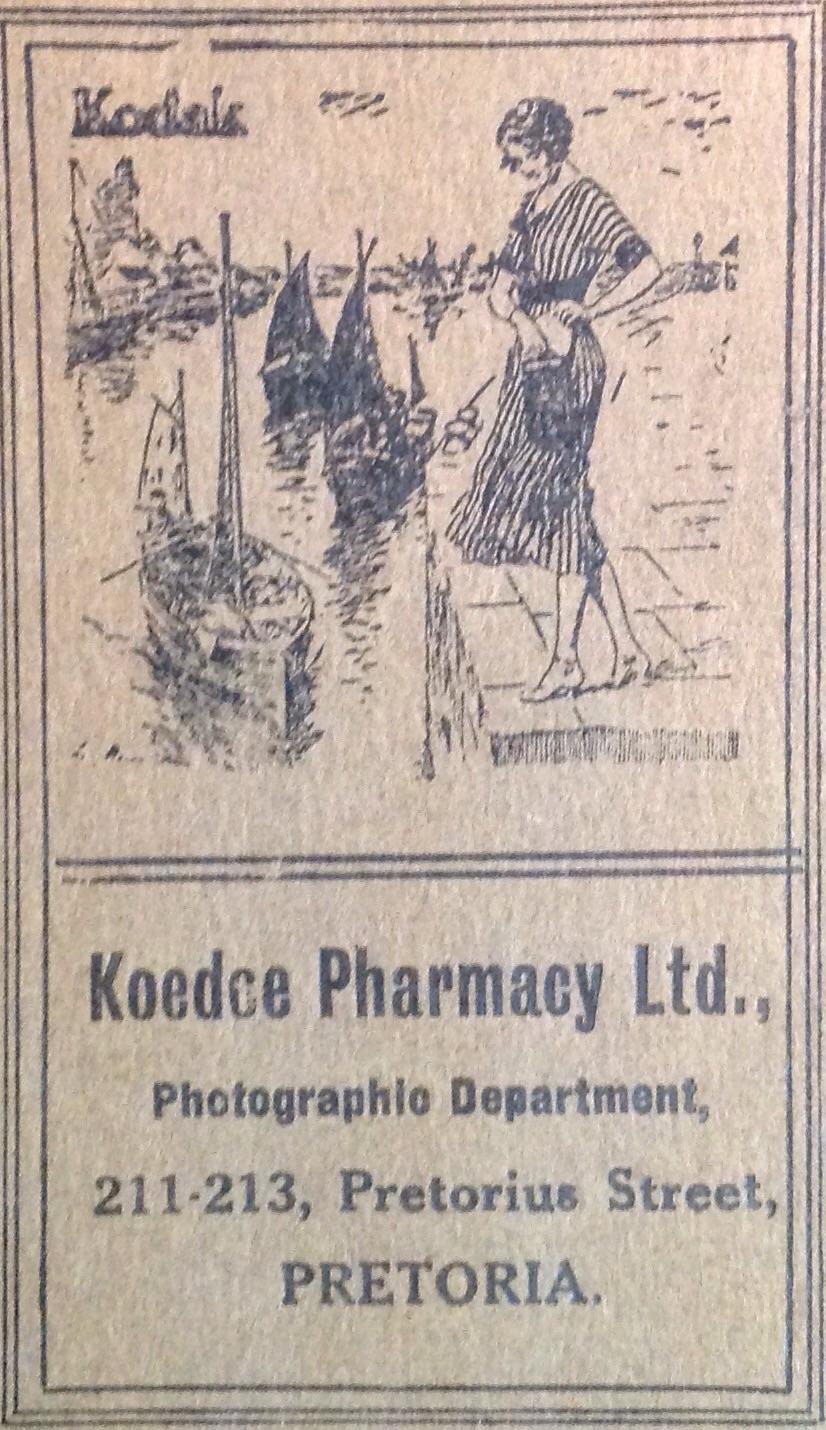 A non-typical South African scene. Lady in her striped dress holding a Kodak camera in a leather bag on her side. Film wallet as presented by the Koedoe Pharmacy (Photographic department) based at 211-213 Pretorius Street, Pretoria. Circa 1920s

Most film wallets were obtained in bulk from Kodak abroad. Once they arrived locally they would then have been distributed by Kodak to chemists, who operated photographic processing under the Kodak brand, country wide. The receiving chemist would then apply an additional rubber stamp or pre-printed label containing their individual details on the wallet.

Some wallets may however have been pre-printed with the chemist details already contained thereon. These types of wallets are in the minority. It is assumed that they may have been printed in South Africa on behalf of the chemist or developer by local Kodak offices. Some South African film wallets only contained one or all three of the Kodak regional office address details, suggesting that Kodak themselves may have developed films at their premises. 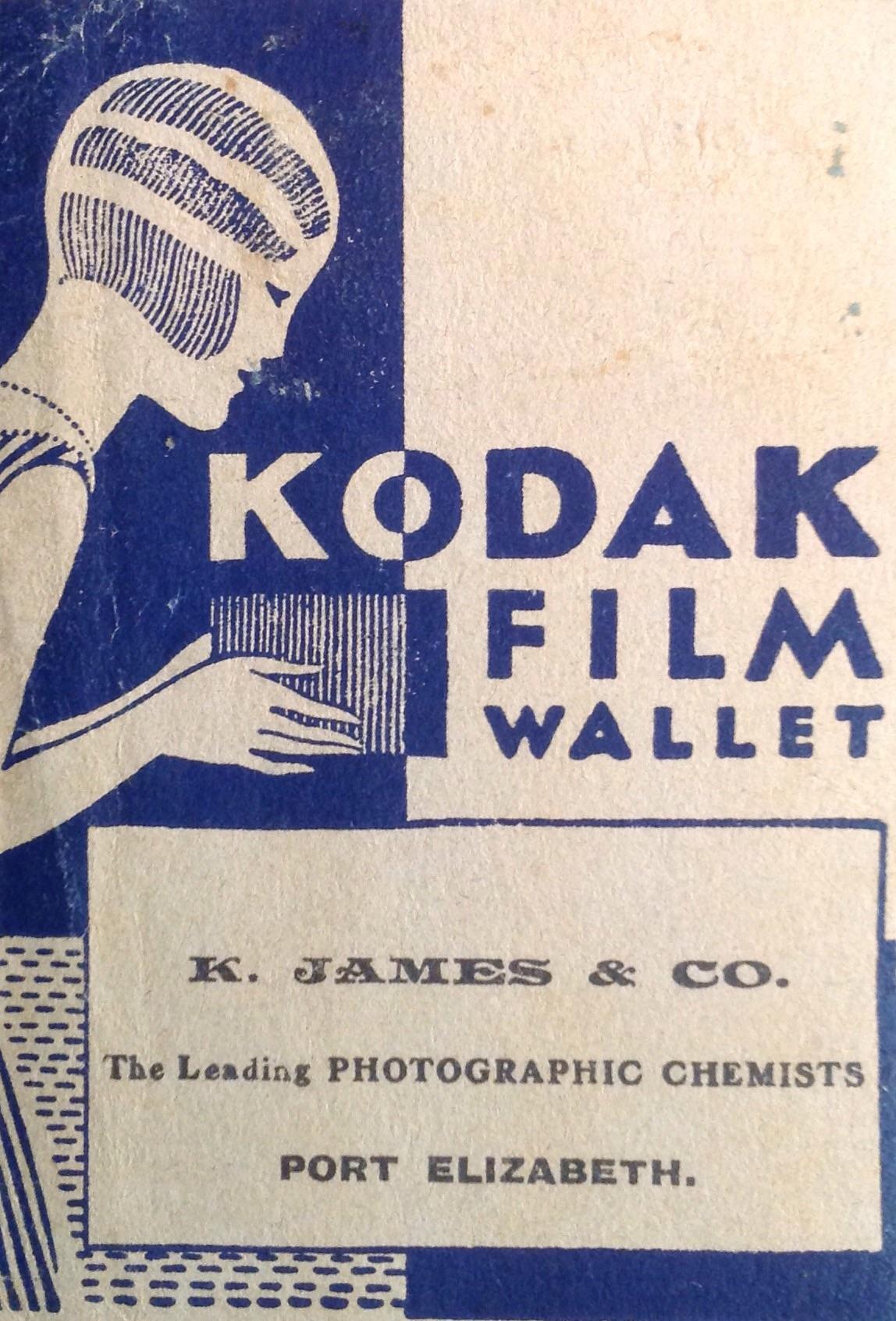 Lady in her striped dress with Kodak box camera. This more modern film wallet version was presented by Photographic chemist K James & Company based in Port Elizabeth. Circa 1930s

George Eastman (1854 – 1932) was the epitome of the American entrepreneur. In his mid-teens, he was already earning a living in banking. He soon quit banking to set up the Eastman Dry Plate Company in 1880. Though he made breakthroughs in technology, particularly mass-production, his greatest contribution to the popularisation of photography was a marketing idea. By offering a total package of camera, film and processing, Eastman eliminated all the fuss and aggravation that had formerly been associated with photography.

Eastman named his first camera Kodak – which was easily pronounceable in most languages, distinctive, not readily misspelt, unlike any other trademark, and had two Ks, which Eastman felt was a firm uncompromising kind of letter. This camera was very successful, but was only sold in its original form for less than a year.

A simpler and cheaper version of this original camera was soon designed, with new models following thereafter at regular intervals.

A Kodak Museum was also established in America to showcase the unique history of this brand.

Kodak lady in a normal dress with a very early version Kodak camera via Carol Hardijzer.jpg 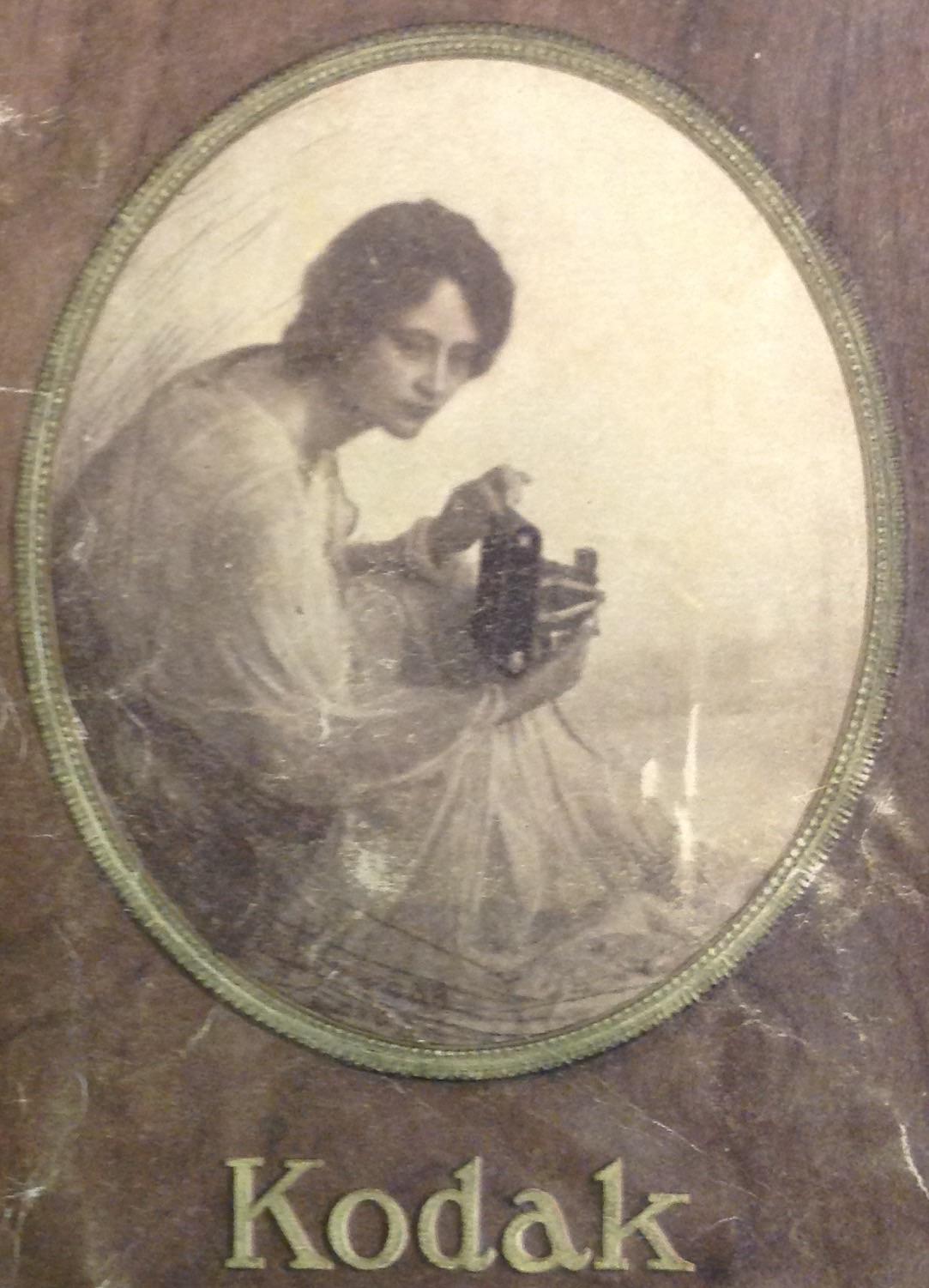 Lady in a “normal” dress holding a very early version Kodak camera. Has Cape Town Kodak regional office details printed on the back. Circa 1910s

Kodak certainly had one of the most durable and successful marketing campaigns in advertising history.

You Press the Button, We do the Rest….

This became Eastman’s classic marketing slogan. Photography was thus brought to many who had never before attempted the process.

This slogan simply meant that when a customer had made a hundred exposures in the initial Kodak camera, the camera was sent to an Eastman factory in Rochester (USA) or Harrow (England) where the film was unloaded, processed and printed, the camera reloaded and returned to the owner.

As simple as that - You press the Button, We do the Rest….

Kodak knew who they should advertise to. Around the turn of the last century, women were becoming more self-sufficient and began to enjoy more freedom, engaging more often in work outside the home and other past times. Based on this, Kodak initiated a highly effective marketing strategy as early as 1893, aimed at women.

Kodak lady in a normal dress via Carol Hardijzer.jpg 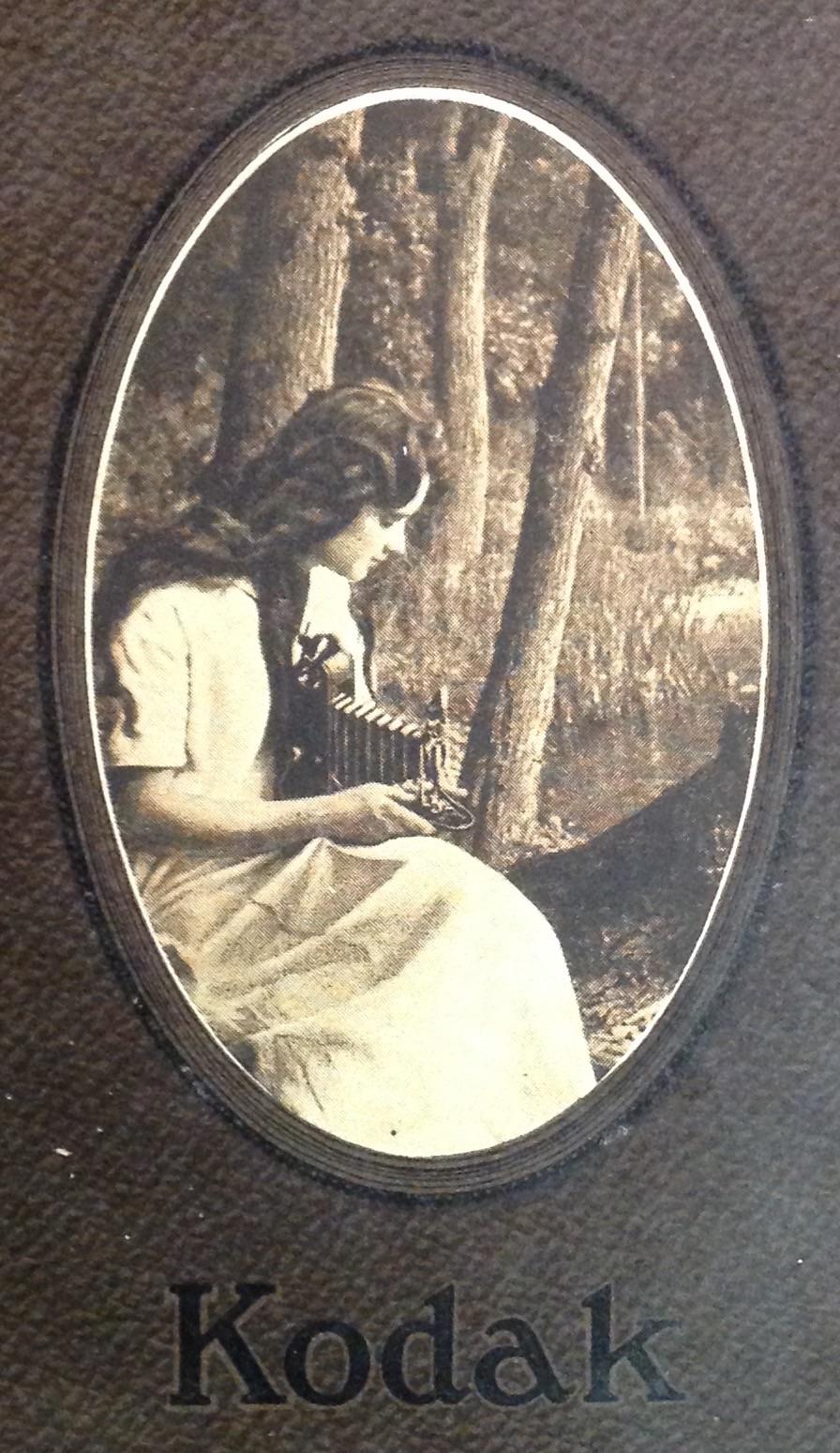 Another lady in a “normal” dress. This was probably the first photographic image used for Kodak film wallets. Circa 1920s. Wallet has Kodak Cape Town regional office details printed on the back. Circa 1920s

In 1910 a striking new element was introduced into Kodak advertising—the “Kodak Girl” as she became known, with her characteristic striped dress. For over 60 years, continuing into the 1970s, she became the personification of popular photography in the public imagination, subtly symbolizing it as easy, fun and family friendly.

The descriptor “Kodak Girl” may sound sexist. Why is the female in these ads not referred to as “The lady in the striped dress”? It is simple – The classy lady became known as “The Girl” in America and this descriptor stuck. There has even been a book published about her with the same title: “The Kodak Girl”.

The Kodak Girl was an image that became familiar to many photographers (both amateur and professional): the fashionable, young, vibrant and romantic woman in her blue and white striped dress, on a wind-swept beach, at the harbour, out on the farm etc. - always with her Kodak camera in hand and in doing so re-enforcing a lifestyle captured forever by the art of photography.

Kodak Girl on a windy beach via Carol Hardijzer.jpg 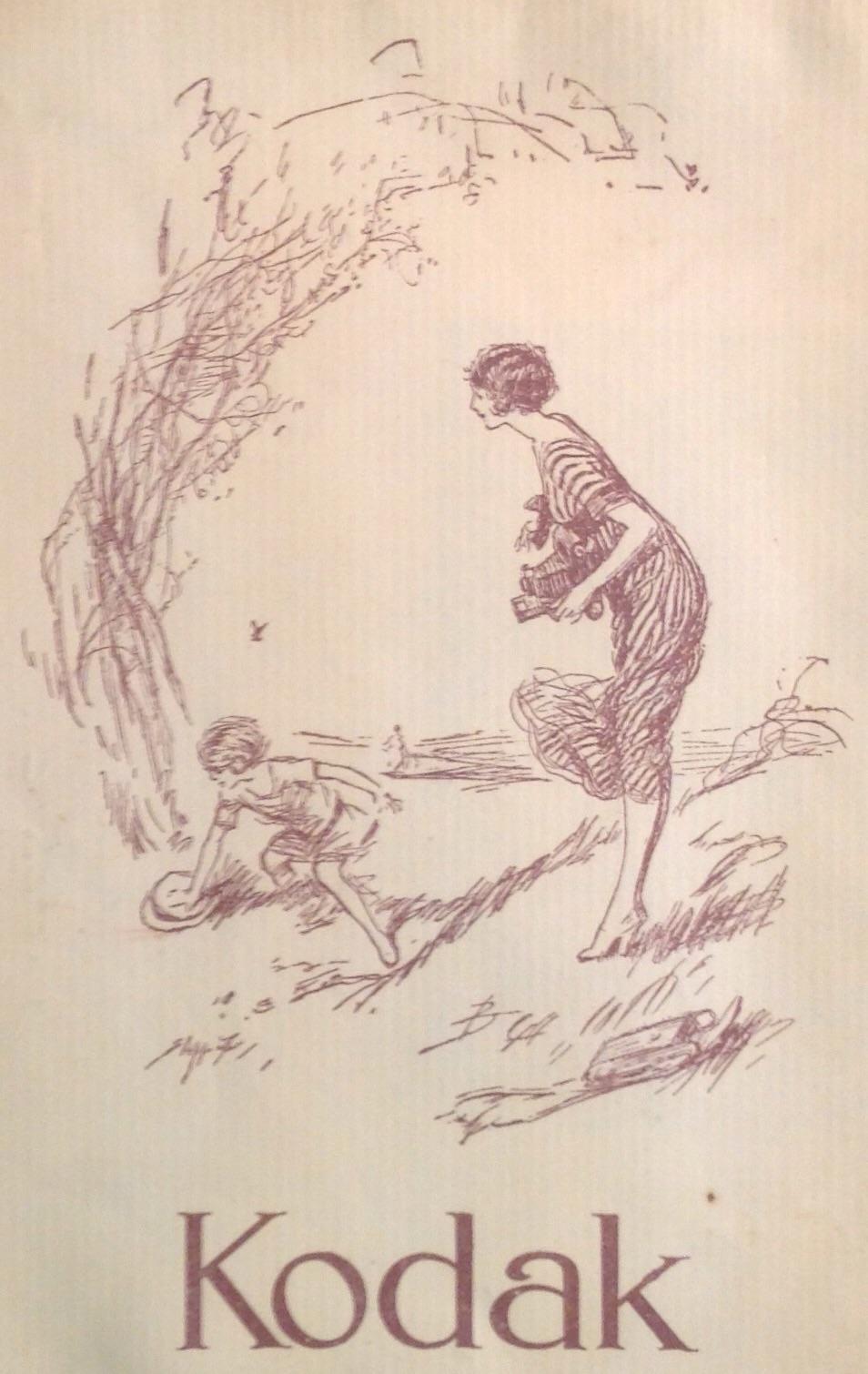 On a windy beach. Film wallet has the Durban regional office details on the back. Circa 1920s

Kodak Lady in a normal dress capturing image of children at play on the beach via Carol Hardijzer.jpg 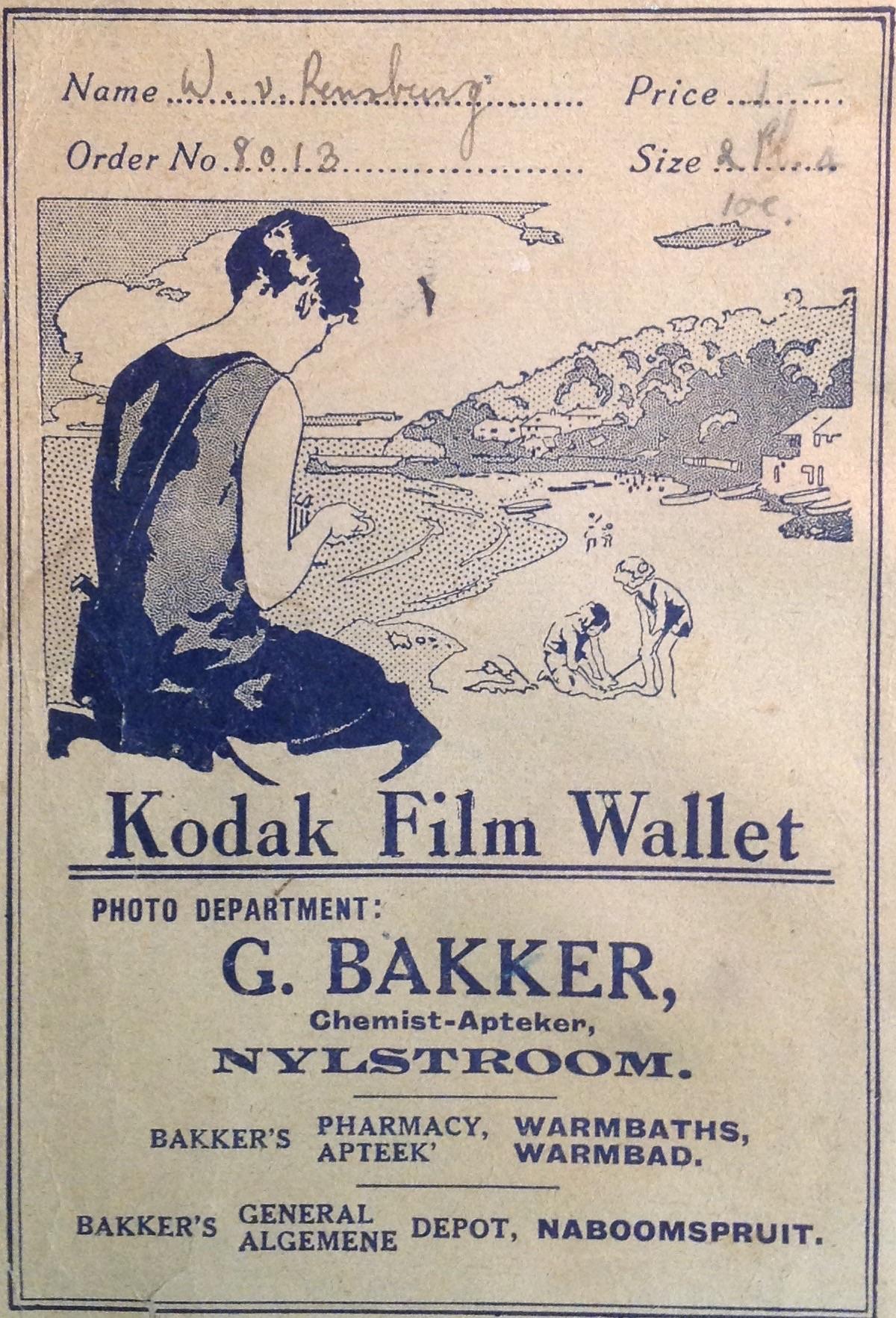 Lady in a “normal” dress capturing image of children at play on the beach. Film wallet was presented by the photo department of chemist G. Bakker based in Nylstroom. This same chemist was also active in Warmbaths and Naboomspruit. Circa 1940

Kodak Lady in her striped dress at the harbour via Carol Hardijzer.jpg 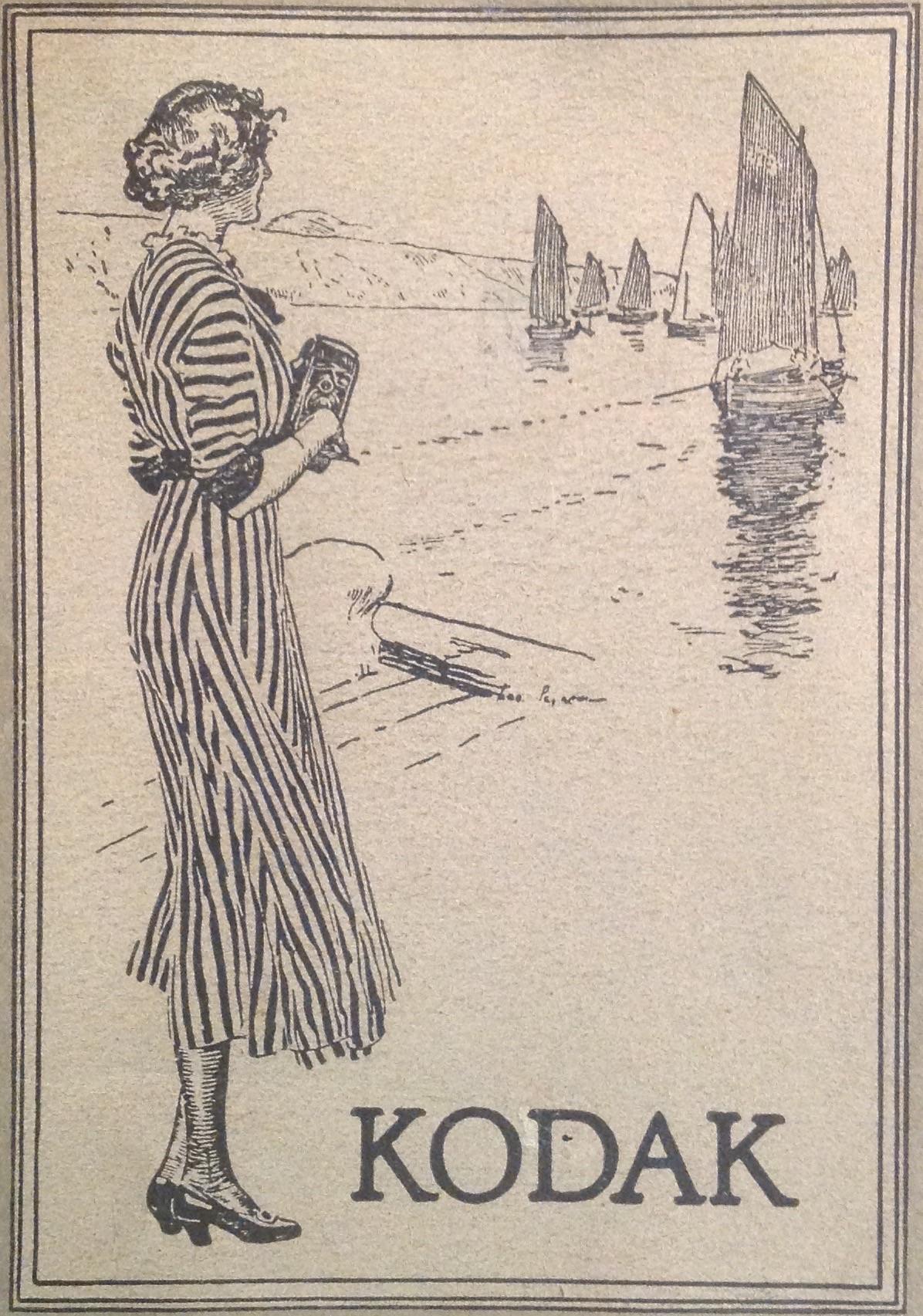 Lady in her striped dress at the harbour. Note the artist's details hidden in the image. Film wallet has the Johannesburg Head Office details printed on the back. Circa 1920s 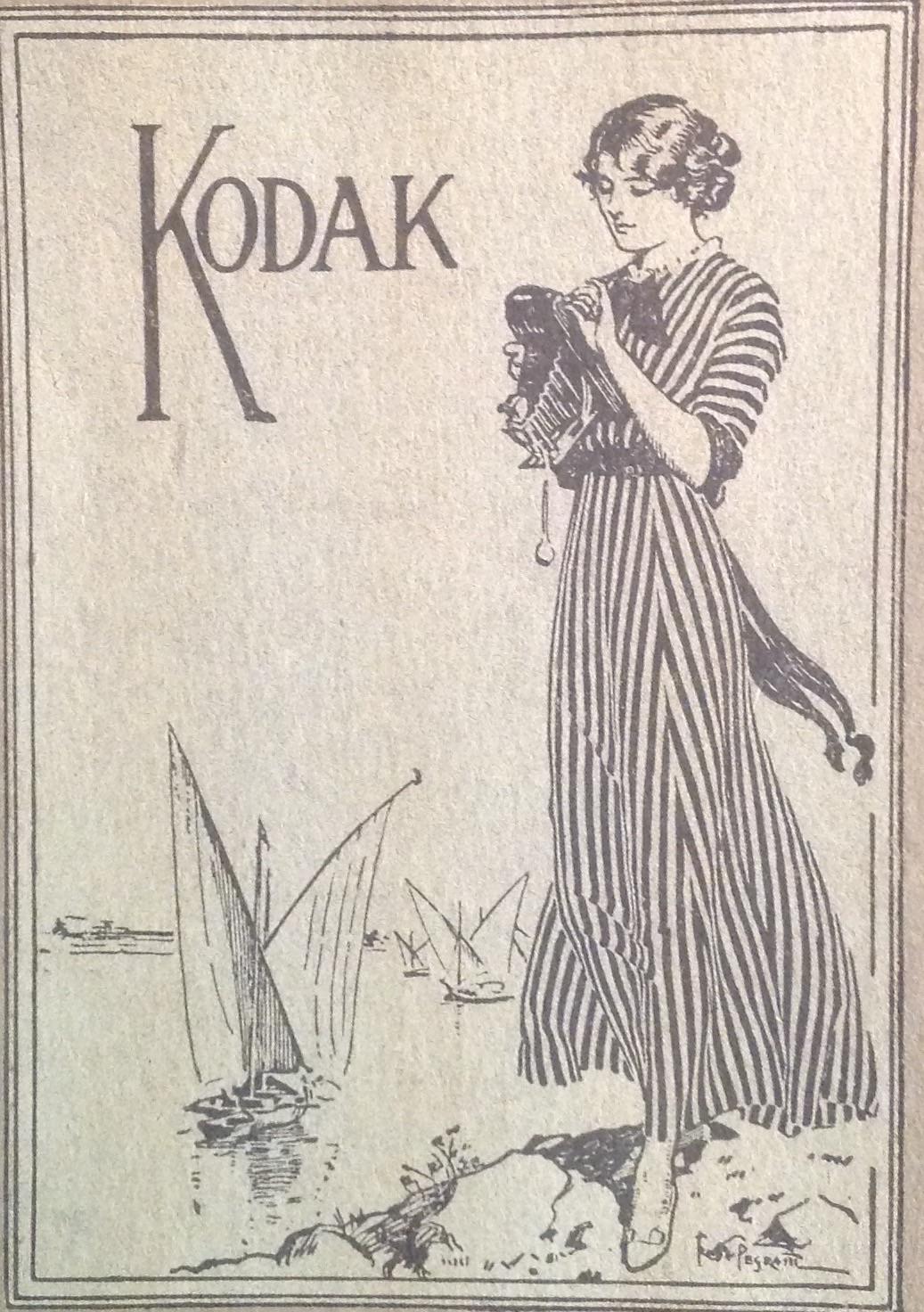 Another harbour scene. Film wallet with Kodak Cape Town regional office details printed on the back. Note the artist's signature at the bottom of the image. Circa 1920s

Lady in her striped dress holding an umbrella with a Kodak camera leather carry bag over her shoulder via Carol Hardijzer.jpg 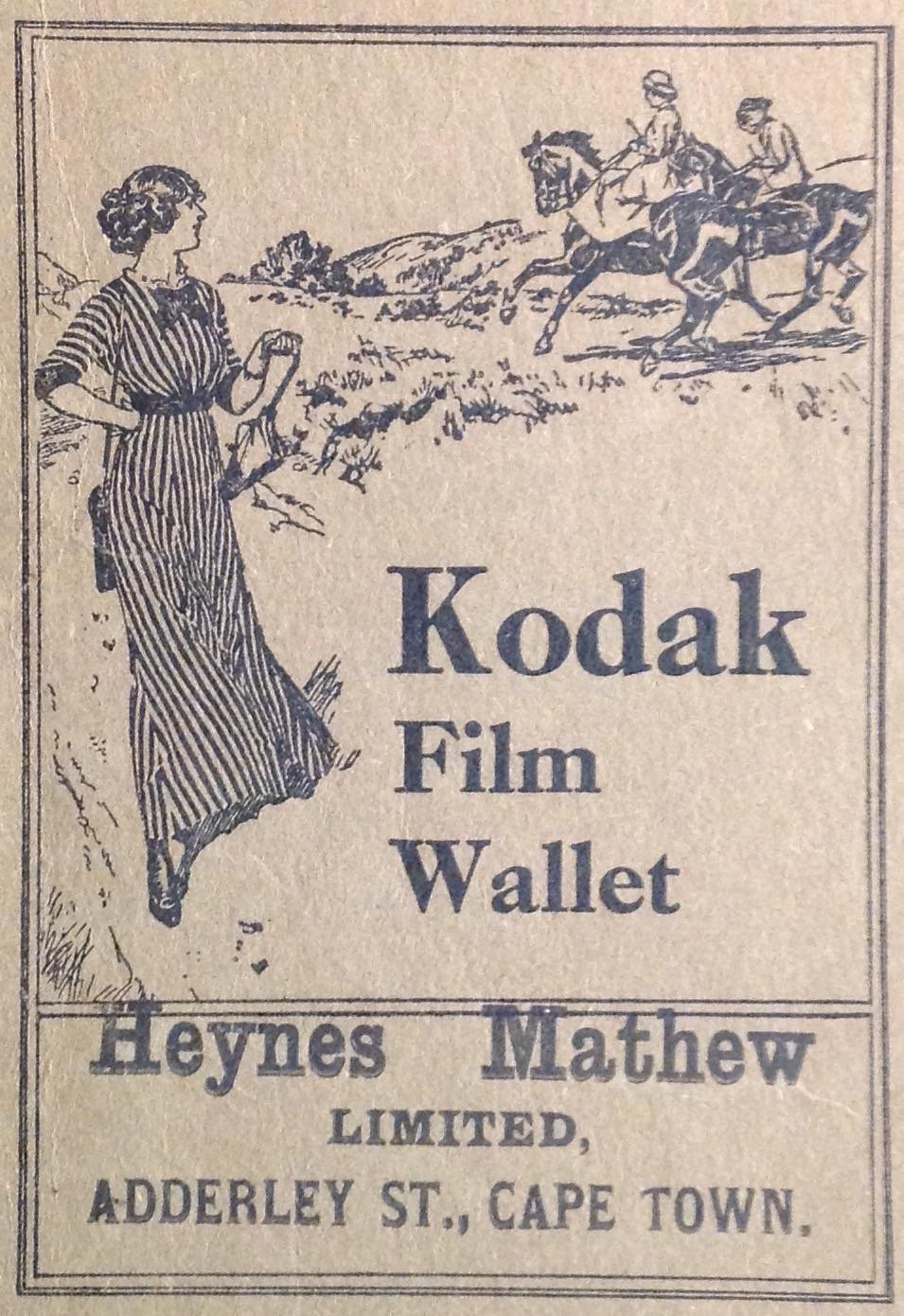 Lady in her striped dress holding an umbrella with a Kodak camera leather carry bag over her shoulder. A Film wallet presented by Haynes Mathew limited based in Adderley Street, Cape Town. Circa 1920s

Created by a leading poster artist, John Hassell, the first Kodak Girl was allegedly based on a photograph taken by Cavendish Morton, with his wife as the model. Over the years, Kodak commissioned some of the best artists and illustrators to design the advertisements and film wallet imagery. As the decades passed, the girl’s appearance altered, reflecting the changing fashion trends of the time.

Very modern version of Kodak lady in her striped dress. Circa 1960s via Carol Hardijzer.jpg 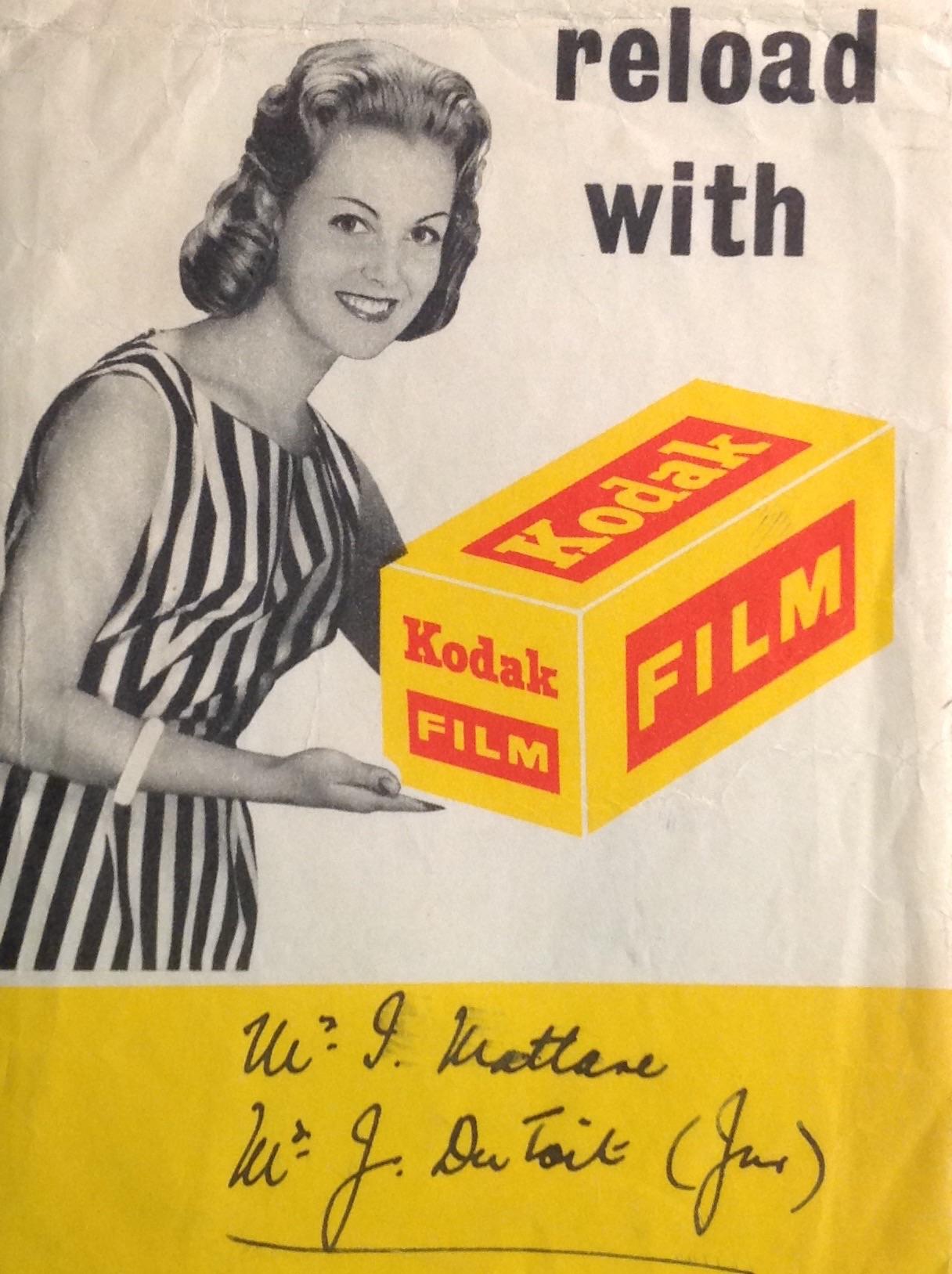 Very modern version of lady in her striped dress. Circa 1960s

To date, it has not been determined whether Kodak South Africa would have had their own artists and illustrators. The author suggests that this is highly improbable in that all the film wallet designs would have originated from either Europe or America.

The Kodak Girl was also referred to as “The Blue Girl” in England and “Dame Kodak” in France.

The Kodak Girl, was even described as the “rose-crowned lady dainty of the ads” in a poem published in a 1901 University magazine. 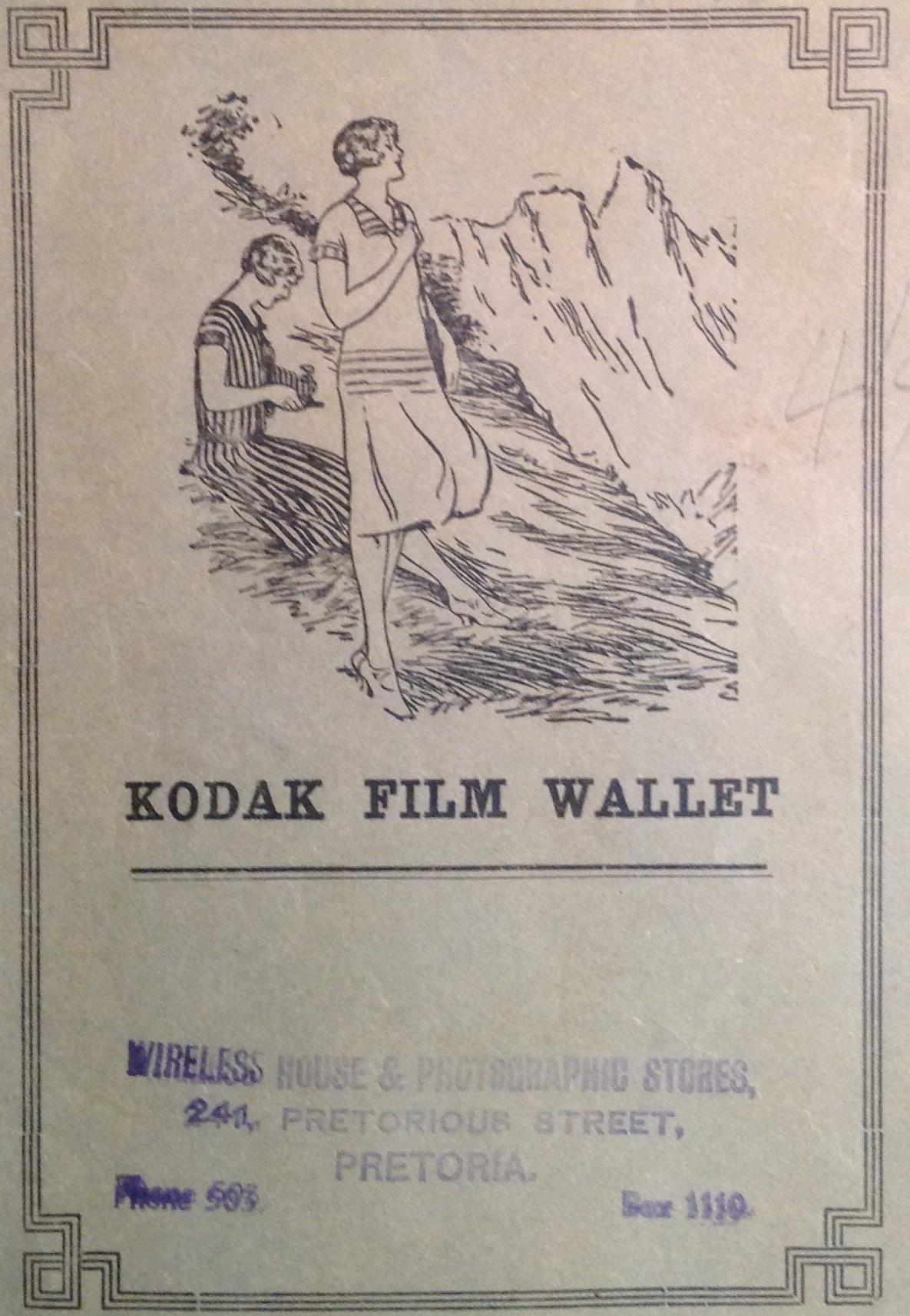 Over time, the Kodak Girl fell out of favour.  Whilst she was still around in film and camera advertising, her job was no longer to sell women on the idea of photography. From the 60s, she was more likely to be seen in a bathing suit, often in the form of a life-sized cut out, reminding customers to re-stock their film supply before the summer holidays.

History of Kodak in South Africa

Kodak’s success was not limited to the Americas or Europe. Kodak also became fully represented in South Africa during 1913. They had representation in:

As a fully entrenched product, Kodak, suspended their operation in South Africa during 1986 (after 73 years in the country) due to political reasons, only to return again 8 years later (during 1994). 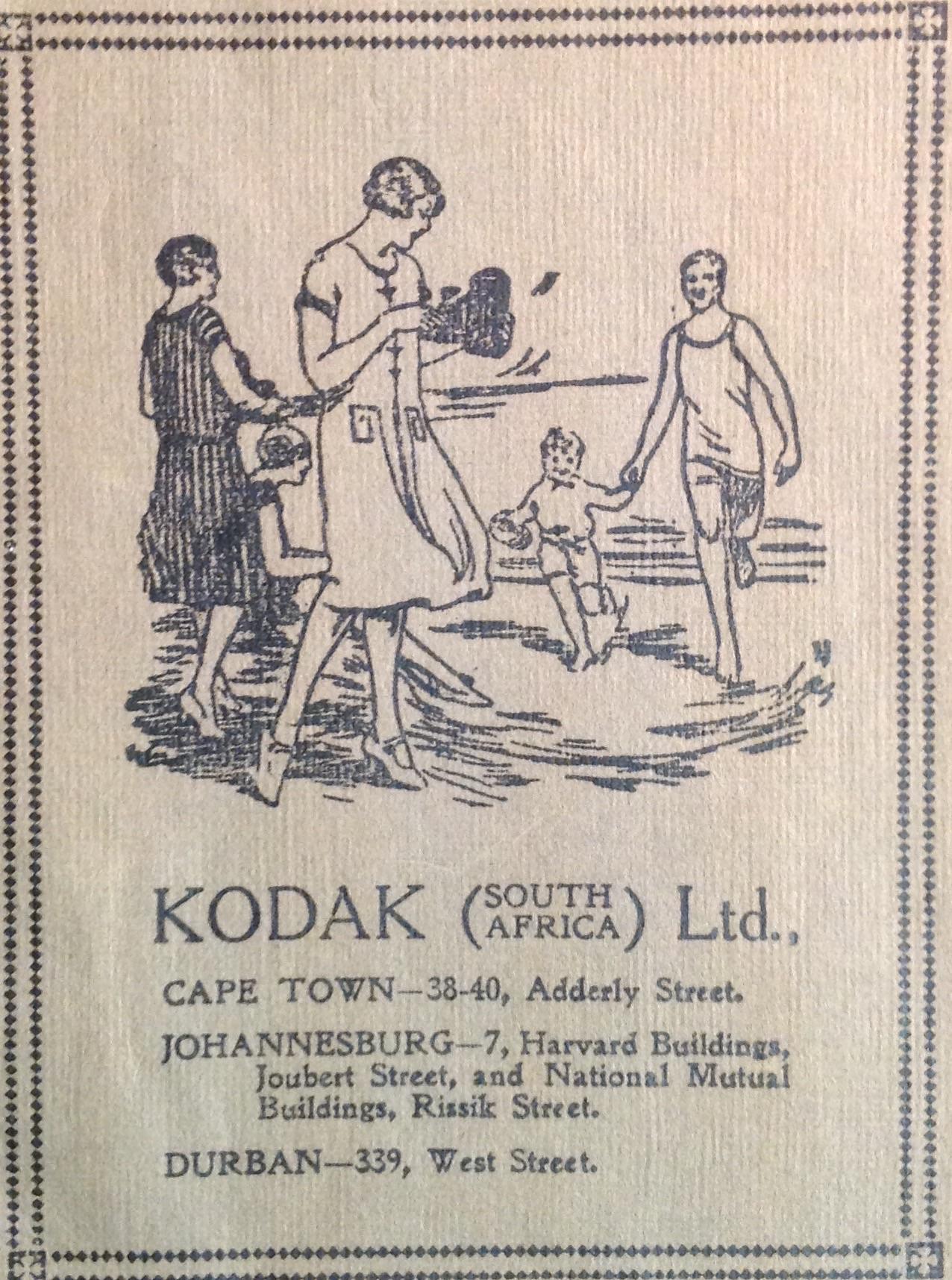 Two women holding Kodak bellows cameras. One in an striped dress and one in an ordinary dress. This film wallet confirms the address of the regional Kodak offices in Cape Town, Johannesburg & Durban. Circa 1930s

After filing for Bankruptcy protection during January 2012, Kodak emerged from this protection during September 2013, focusing on servicing international and commercial customers. Its main business focus is in Print Systems, Enterprise Inkjet Systems, Micro 3D Printing and Packaging, Software and Solutions, and Consumer and Film.

Kodak intends to make KodakCoin, a photographer-oriented blockchain cryptocurrency, available by July 2019. This is a classic example of how companies need to adjust and innovate to remain relevant.

Kodak cameras in themselves provide a wonderful field for the specialised camera collector. The author, a keen collector of anything Kodak, is also building a collection of German designed Kodak Retina and Retinette cameras.

Other Kodak antiques or collectables, that can provide a lifetime of happy hunting for the collector, include:

Any Kodak item in its original box heightens the collectability of these.