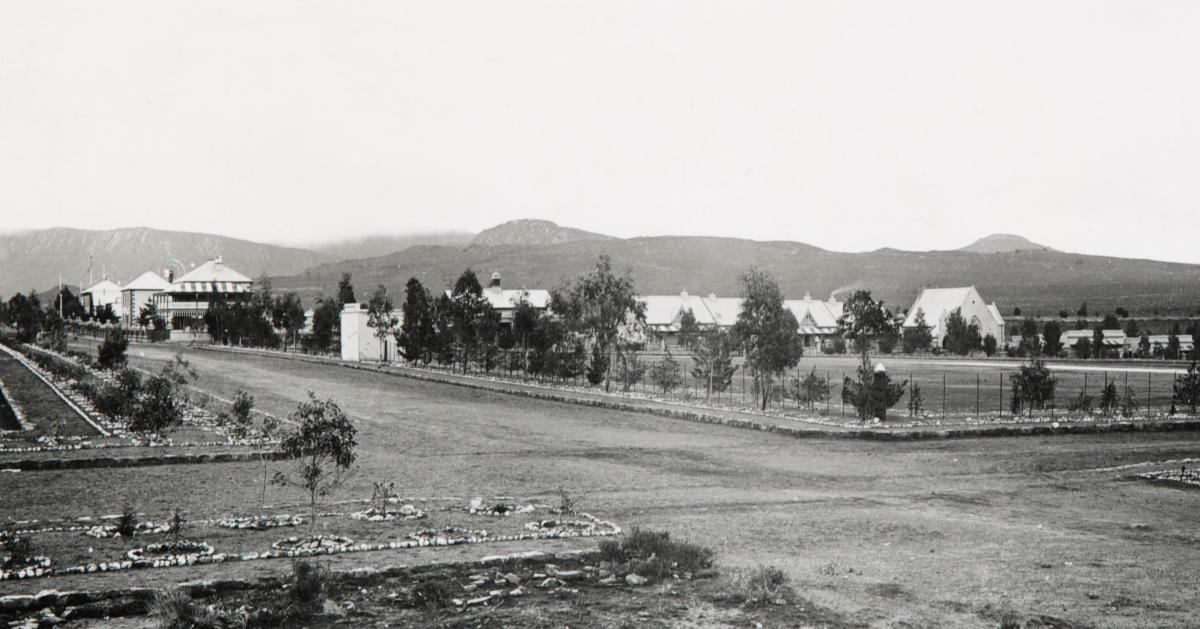 In April this year the charming Victorian village of Matjiesfontein will host a weekend of talks and events commemorating the history of the South African / Anglo Boer War (click here for details). One of the speakers is Dr Dean Allen who has written the definitive history of Matjiesfontein and its founder James Logan (many readers will be familiar with his book Empire, War and Cricket in South Africa). In the article below, Allen explores key aspects of Logan's remarkable life and reveals the political and sporting history he helped to shape. 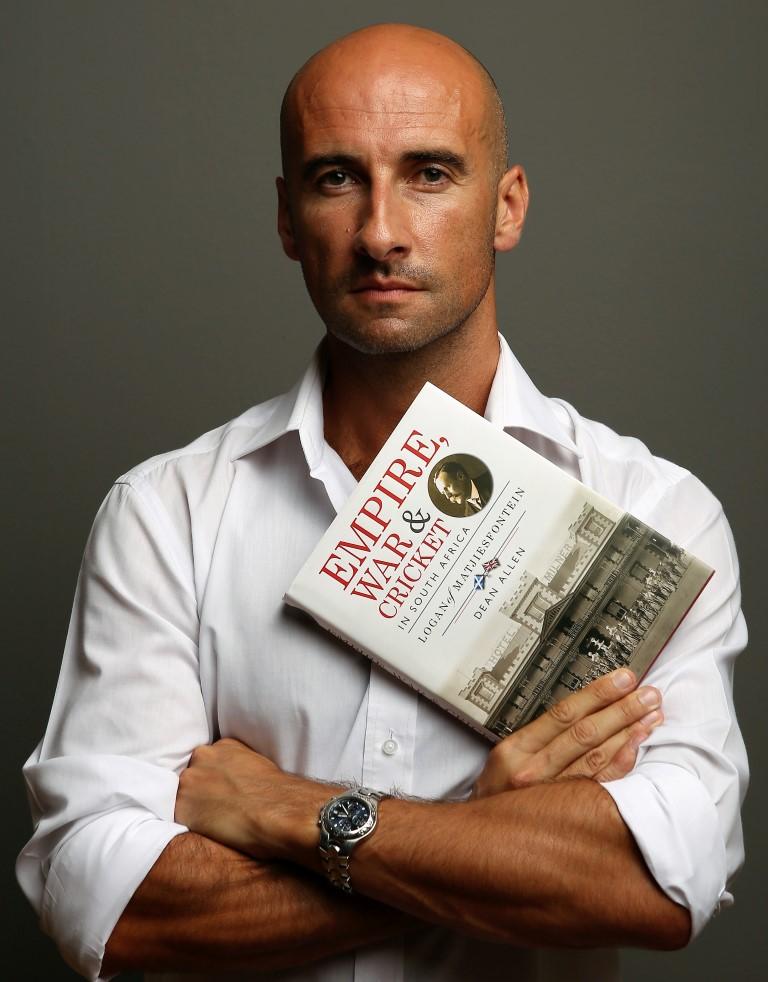 James Douglas Logan was born in Scotland on 26 November 1857 at Reston, a small working-class Berwickshire town close to the English border. By the age of fourteen, Logan had joined his father as a clerk at the town’s railway station. However, the young Scot’s ambitions soon outgrew the confines of the rigid class structure of Victorian Britain. The British Empire was expanding and the colonies were offering the promise of a new beginning. In South Africa, as one analyst suggested, ‘money was the criterion … We didn’t have any class other than a money class. There was no aristocracy.’ Logan, like thousands of others, decided that opportunity and, more importantly, status, were easier obtained in British enclaves overseas. 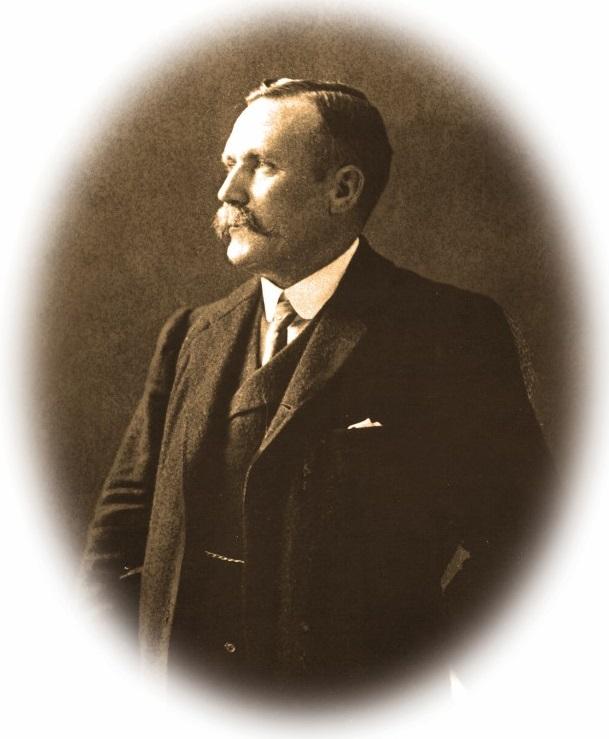 In 1877 James Logan worked his passage to South Africa and immediately headed to the bustling port of Cape Town, a trade and commercial centre that braced itself for rapid transformation with the discovery of diamonds in the north. One urgent need was an improved rail and transportation system throughout the interior. The timing of Logan’s arrival in South Africa could not have been better. The construction of the railways opened up the African interior to imperial expansion, with the railway and the telegraph becoming, in Cecil Rhodes’ view, ‘the keys to the continent’.

Logan’s timing was opportune and his progress rapid. Given his experience, he was appointed Station Master at Cape Town and then offered the important position of District Superintendent of the vast semi-desert region of the Karoo. The growth of James Logan’s business and political careers, as well as his support of first-class cricket, was established from his unlikely base in the Karoo.  Having acquired great wealth through insider trading and shady diamond deals, in 1883 Logan resigned from the Cape Railways and bought land at Matjiesfontein station. Here he opened a new rail refreshment room and set about creating a model village, with all the latest trappings of Victorian Britain, as ‘a veritable oasis in the Karoo’.

Despite its isolation, Matjiesfontein attracted attention. A master of self-publicity, Logan stage-managed major developments in the village with widespread coverage in Cape Town newspapers. The growing populace conferred on Logan the unofficial title, ‘Laird of Matjiesfontein’. By the 1890s, the Laird’s enterprise had paid off as a stream of celebrated figures journeyed to Matjiesfontein. Within British high society it became fashionable to make the sea voyage to the Cape, with a visit to Matjiesfontein almost mandatory.  Logan’s name and village were soon known throughout the empire. Lord Randolph Churchill (father of Winston) was an early visitor to the village during June 1891; he was followed by the likes of the Duke of Hamilton as well as His Highness Prince Seyyid Ali, the Sultan of Zanzibar.  Other notable visitors included Lord Carrington and the Admirals Nicholson and Rawson as well as the astronomer Sir David Gill.  These dignitaries provided Logan with highly desirable publicity. 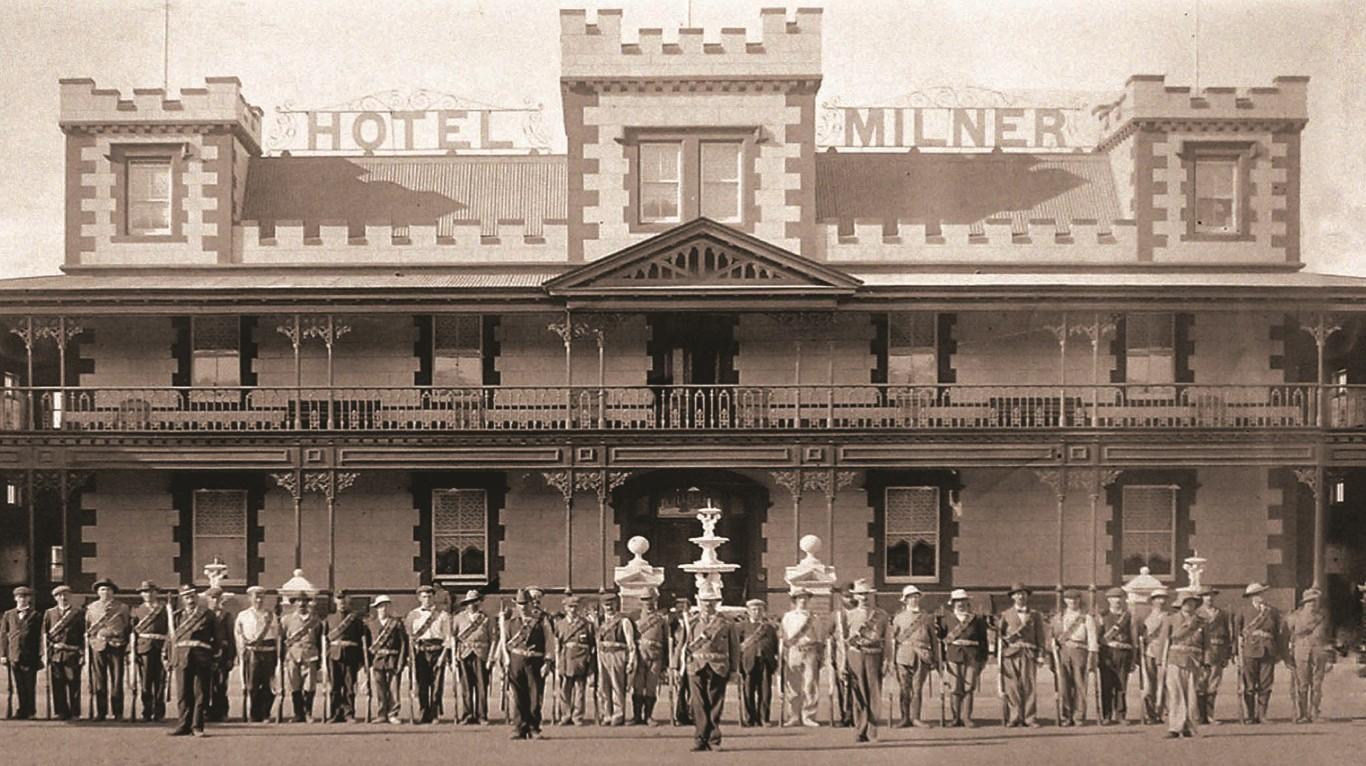 Coinciding with Logan’s rapid rise in fortune was his involvement in cricket. A keen advocate of the game, Logan’s original plans for Matjiesfontein had included a full-sized cricket square (see main image) and during the 1890s he hosted English and South African cricketers at this unlikely venue. A hospitable sojourn at Matjiesfontein was an enjoyable part of a touring side’s programme and brought both Logan and Matjiesfontein public acclaim. He had even invited George Lohmann, one of England’s greatest-ever cricketers, to make Matjiesfontein his home (Lohmann, the Surrey legend, is buried at Matjiesfontein following his premature death in 1901 at the age of just 36). However, it was as a benefactor of the game in South Africa that Logan made his greatest contribution. 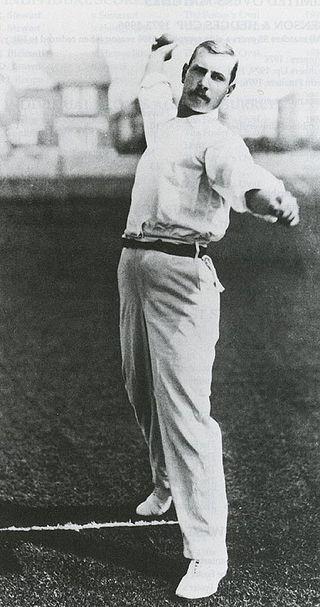 James Logan was heavily involved in ‘sponsoring’ each of England's tours to South Africa during the 1890s and with the help of some well-connected friends in the corridors of power, he was soon to achieve his ultimate ambition – to take his own South African team to England. Incredibly, this would take place in 1901 – in the midst of the South African War!

Logan’s team arrived at Southampton on 3 May 1901, and went on to play twenty five matches over the next three months. Despite a poor start, losing five of their first six matches, the tourists recorded thirteen victories, nine defeats, two draws and a tie during a tour that took in Scotland and Ireland as well as the major English regions. Five of the victories and the tied match were achieved in the fifteen first-class fixtures.  Included was the highest total ever made by a South African team in first-class cricket – 692 against the University at Cambridge. Given the timing of the tour, however, Logan and his team would face significant opposition.

In an angry letter to the Spectator, the creator of Sherlock Holmes and avid cricket enthusiast, Arthur Conan Doyle declared:

Sir, - It is announced that a South African cricket team is about to visit this country. The statement would be incredible were it not that the names are published, and the date of sailing fixed. It is to be earnestly hoped that such a team will meet a very cold reception in this country, and that English cricketers will refuse to meet them. When our young men are going from North to South to fight for the cause of South Africa, these South Africans are coming from South to North to play cricket. It is a stain on their man-hood that they are not out with rifles in their hands driving the invader from their country. They leave this to others while they play games. There may be some question even in England whether the national game has justified itself during this crisis, and whether cricketers have shown that they understood that the only excuse for a game is that it keeps a man fit for the serious duties of life. There can be no question, however, that this South African visit would be a scandal. I trust that even now it may be averted.

In Logan’s native Berwickshire, defence for the tour was provided by the local press: ‘Mr Logan has, with the majority of his team, fought steadily through the campaign for eighteen months. He raised a company of rifles at Matjiesfontein in the Karoo, and has obtained leave of absence from his command for three months.’ The Scot’s involvement in the war, like that of his players, was being embellished to exonerate the timing of the tour. In an article for The History of South African Cricket, published in 1915, fast-bowler J.J. Kotze wrote: ‘I wish Conan Doyle had done his fair share of fighting instead of starting a controversy in the press.’

The timing of the tour was not the only controversial aspect. The press also criticised the team because it was not a fully-fledged South African side. It was, as some suggested, essentially a private venture organised by Logan and made up of players largely from the Cape, including his own son. It is significant to point out though that unlike the first South African team that toured England in 1894, Logan’s side was granted first-class status by the MCC. Had they begun the tour with minor matches in order to adjust to the turf wickets, they might have done better. The poor start weighed heavily against the ultimate success of the tour.

Logan, the ‘Squire of the Southern Karoo,’ returned to South Africa having achieved a long-held ambition by leading his own cricket tour to the home of the ‘empire game’. In July 1902, he received the ultimate accolade when he and his wife were invited to the coronation of King Edward VII and Queen Alexandra at Westminster Abbey. There were invitations too to the Colonial Reception at St James’ Palace hosted by the Prince and Princess of Wales and attended by royalty and an array of dignitaries from around the Empire. Logan’s contribution to British affairs in South Africa had been formally recognised. By the end of the South African War, his social elevation was complete.

You can learn more about James Logan and his incredible story by joining Dean Allen and other guest speakers at Matjiesfontein for the inaugural Anglo-Boer War weekend on 7-9 April 2017. To book your spot email bookings@lordmilnerhotel.co.za or call the reception at Matjiesfontein directly on 023 561 3011.  Click here for full details.

Allen's book Empire, War and Cricket in South Africa: Logan of Matjiesfontein is available at all good book shops or via bookorders@deanallen.co.za. Further information about Dean and his work can be found via his website: www.deanallen.co.za 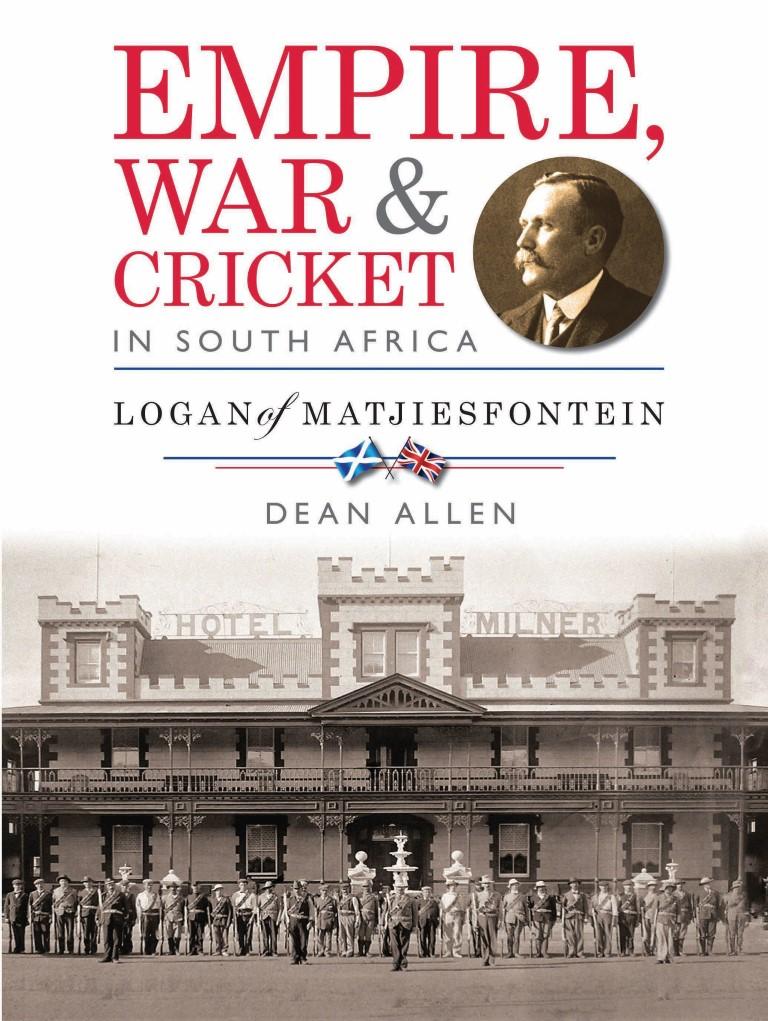