Lion Battery - The Russians and the Noon Gun

Lion Battery is a richly layered historical, social, architectural, aesthetic, scientific and technological landscape. The battery and its historical layering was influenced by significant international events. It is today the site from where Cape Town’s famous noon gun is fired from. Construction started in 1888 and was completed in 1890. By June 1890 both No. 1 and No. 2 emplacements were ready for the mounting of 9 inch RML Guns. All work was done by pick and shovel. 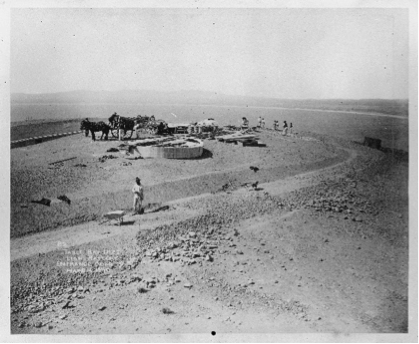 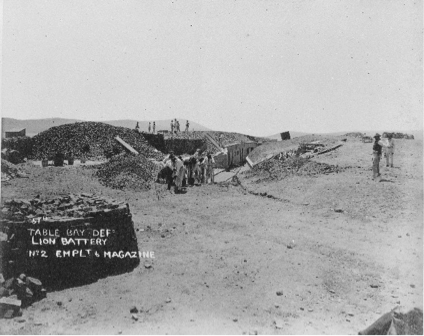 Russian expansion in Afghanistan started in the 1870s. This raised concerns that Britain’s domination of the Indian Ocean would be compromised. Concern at the Cape manifested itself in a cartoon in the Lantern on 23 March 1878 with the Russian Bear threatening the maiden labelled ‘Cape Colony’. 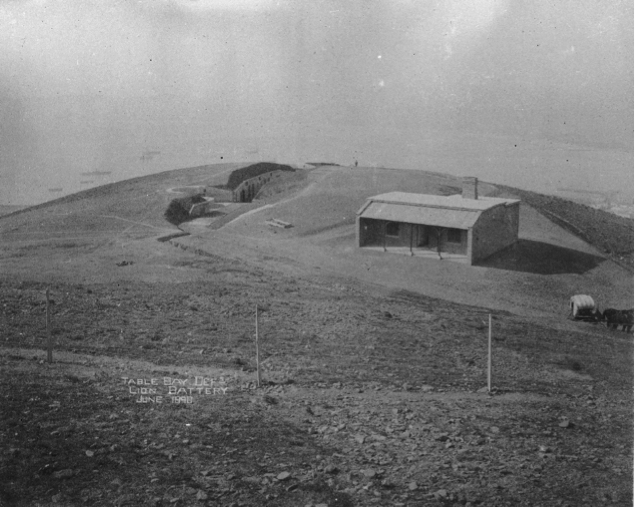 In 1884 Russian troops occupied Merv on the northern border of Afghanistan. A year later they crossed the border, attacked and defeated the Afghan soldiers manning the fortified frontier positions at Pendjeh.

The Imperial Committee on Defence was alarmed that Russia would be in a position to threaten British interests in India and bases in the Indian Ocean. Defence upgrades in Durban and Cape Town were then planned. 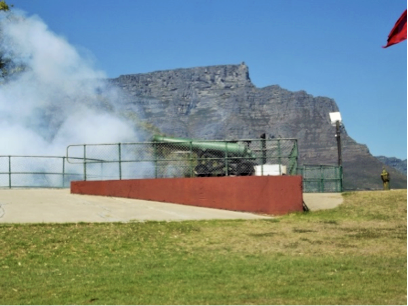 The noon gun was moved to Lion Battery in august 1902. Before that it had been fired from the Imhoff Battery. Supplies of electric detonators ran out in WWII. The gun was then fired by hitting a percussion cap [commonly used by the mines to set off dynamite with] a hammer. The Artilleryman had to stand at a certain angle or get seriously injured. Quite a few hammers were severely damaged in the process.

One gun was also secretly replaced with one from the Castle in WWII after the contractor who was to refit the worn percussion mechanism broke his tap inside the mechanism. The botched repair job can still be seen on the one cannon at the entrance to the Castle.

The time signal has been given by the observatory since 1820 and with the development of the telegraph and electricity by means of an electric bell. The gun can sometimes be heard at the observatory 18 seconds after firing.

The first public observance of the Pause of Remembrance took place in Cape Town on 14 May 1918, the two minute silence commencing with the firing of the noon gun. In 2008 a plaque was unveiled at the battery to commemorate the two-minute pause. The two-minute pause is to-day a recognised part of remembrance services world-wide.

View from no 1 emplacement via Ron Viney 2014.png 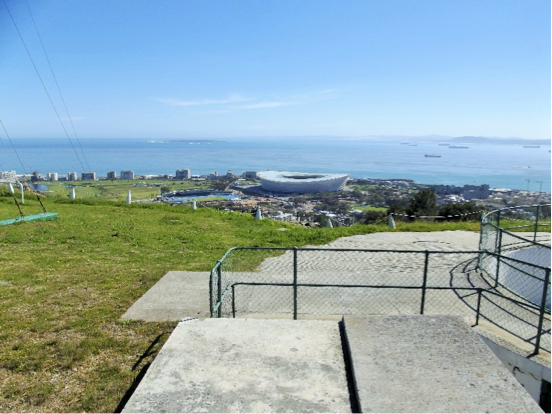 Most of the CGA were demobilized in February 1919. The Union Defence force officially took over in December 1921. In 1928 two Ordnance Hotchkiss QF 6 pounder Mk I guns manufactured by the Elswick Ordnance Works were also on site. Two rounds from the 9.2-inch guns and 42 rounds from each of the 6 pounder guns were fired annually.

Firing of the larger guns stopped in 1935 because of complaints and damage claims from residents in Seapoint.

In World War II the large guns were removed and replaced with two 6-inch QF Mk II guns. All instruments were manned by ASWAAS girls who had been posted to the battery.

The Catzenellenbogen Bastion at the Castle was used to fire salutes until 1939 when it was moved to Lion Battery. Four 12-pdr 12cwt Mk I guns were mounted at Lion Battery in 1943. The Navy still fires return salutes to visiting naval vessels with these 4 guns. 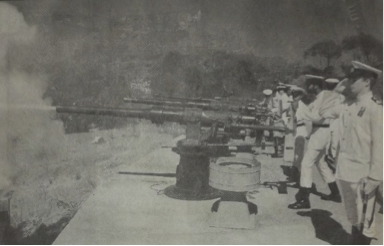 The Noon guns are 18-pounder smooth-bore muzzle loaders. Both are loaded with 1,3 kg. of black powder before each shoot. Both guns are loaded but only one is fired. The other serves as backup in case of a misfire. The guns bear the monogram of King George III (1769 to 1820). They were cast by Walker and Company. One is mounted on a cast iron garrison standing carriage. The other is on a more recent mock up. A third gun of this type is also on site but on the wrong type of carriage. The guns were moved to their present position in 1998 for safety reasons when the firing and the site was opened for public access. The remains of the original location from 1902 to 1998 are still extant. 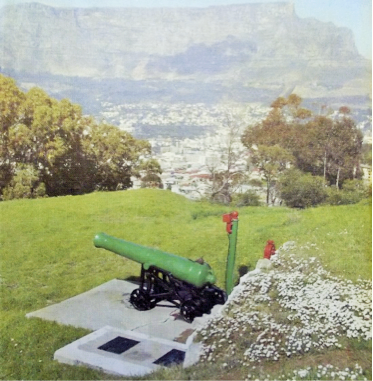 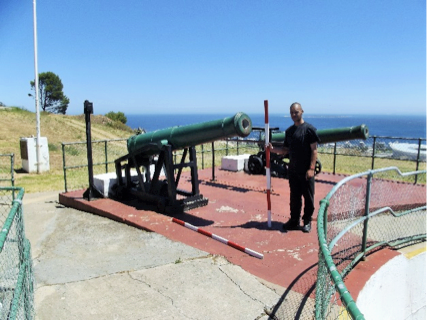 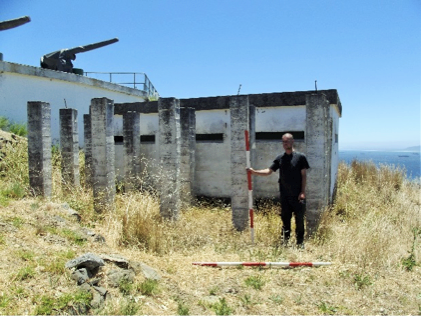 The barracks, built in 1911 with the upgrading of the original emplacements and construction of a third emplacement, is very Edwardian in style and materials. Of note are the solid cast iron pillars of the verandah. 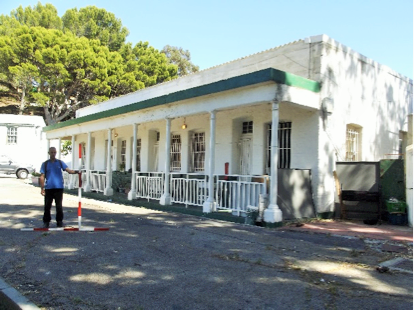 A prefabricated corrugated iron and cast iron structure was built to house the generator that powered the hydraulics of the two 9.2 inch guns placed on site in 1911. The gutters and downpipes significantly were made by a prominent Industrial Revolution foundry: Carron & Co. A home-made fire bell and fire bucket stand are also still evident. 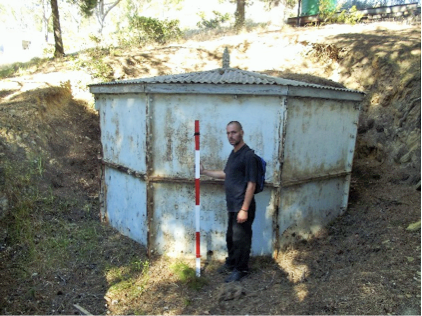 A hexagonal water tank dating from 1892 is still to be seen. It is one of 4 that were brought into the country but the only one that bears any markings. Two were placed in Simonstown and the third at Fort Wynyard of which only the foundation is left. The tank is highly significant as a rarity. It is a cast steel prefabricated structure and is an example of the extensive use by the Victorians of relatively inexpensive prefabricated steel construction methods.