Restoring Kitchen Car 269: the Curious Tale of the Designer 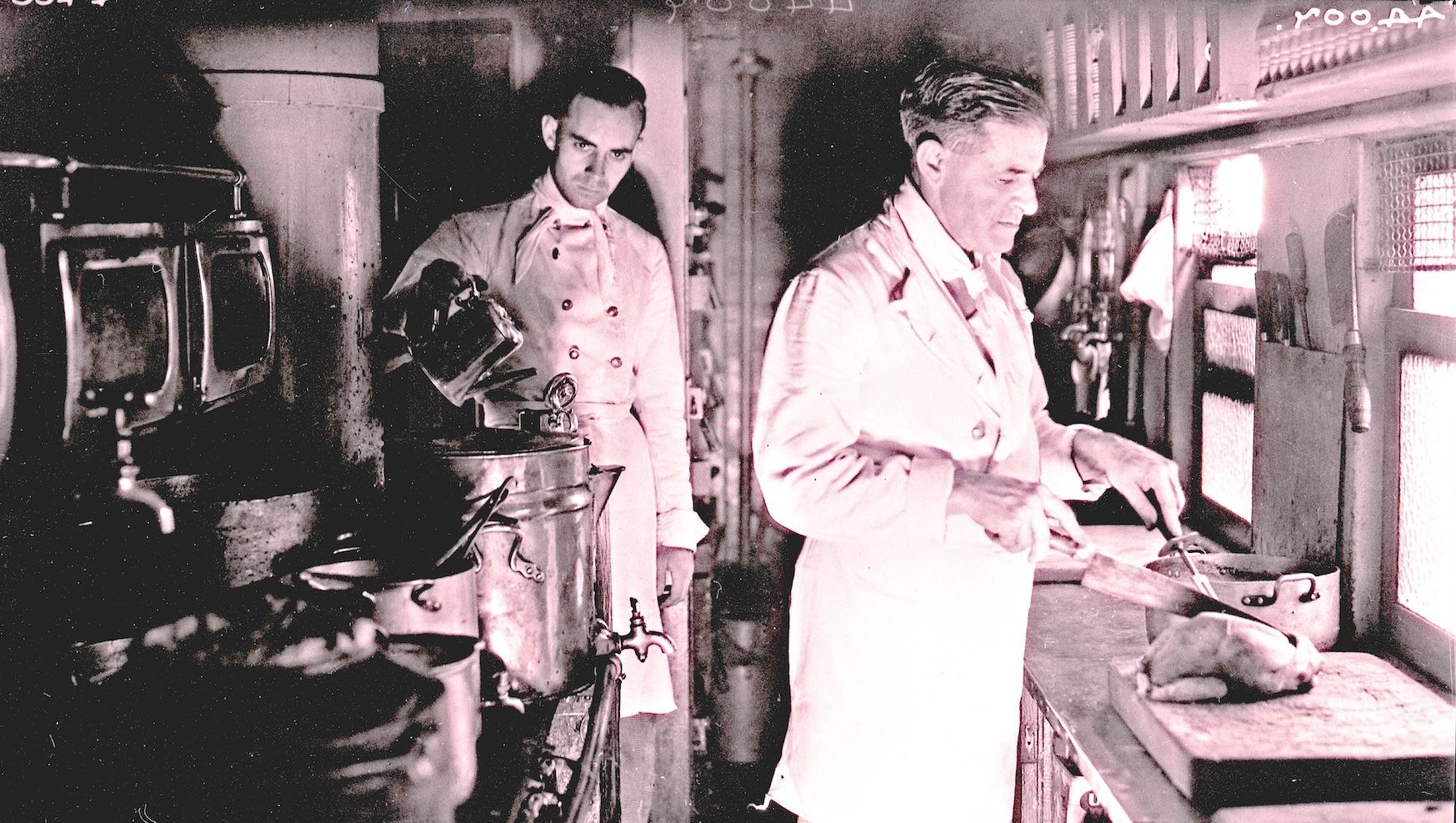 Members [of the Railway Society, Natal Branch] can hardly fail to be aware that the Umgeni Steam Railway (USR) restoration team has been busy for many a long day with a circa-1928 kitchen car, no. 269. One of the USR senior members has been heard to refer to it despondently as “the gift that keeps on giving” as every problem solved seems only to generate another problem. However, work continues and has turned up a story this ex-Johannesburger finds fascinating and worth re-telling.

One discovers in Les Pivnic’s (1985) esteemed book on railway dining cars, that the batch of kitchen cars to which no. 269 belongs, was designed by a team including one “Chef Zimmerli” – a name of considerable renown among lovers of good food of a certain age, living in Johannesburg some time ago. 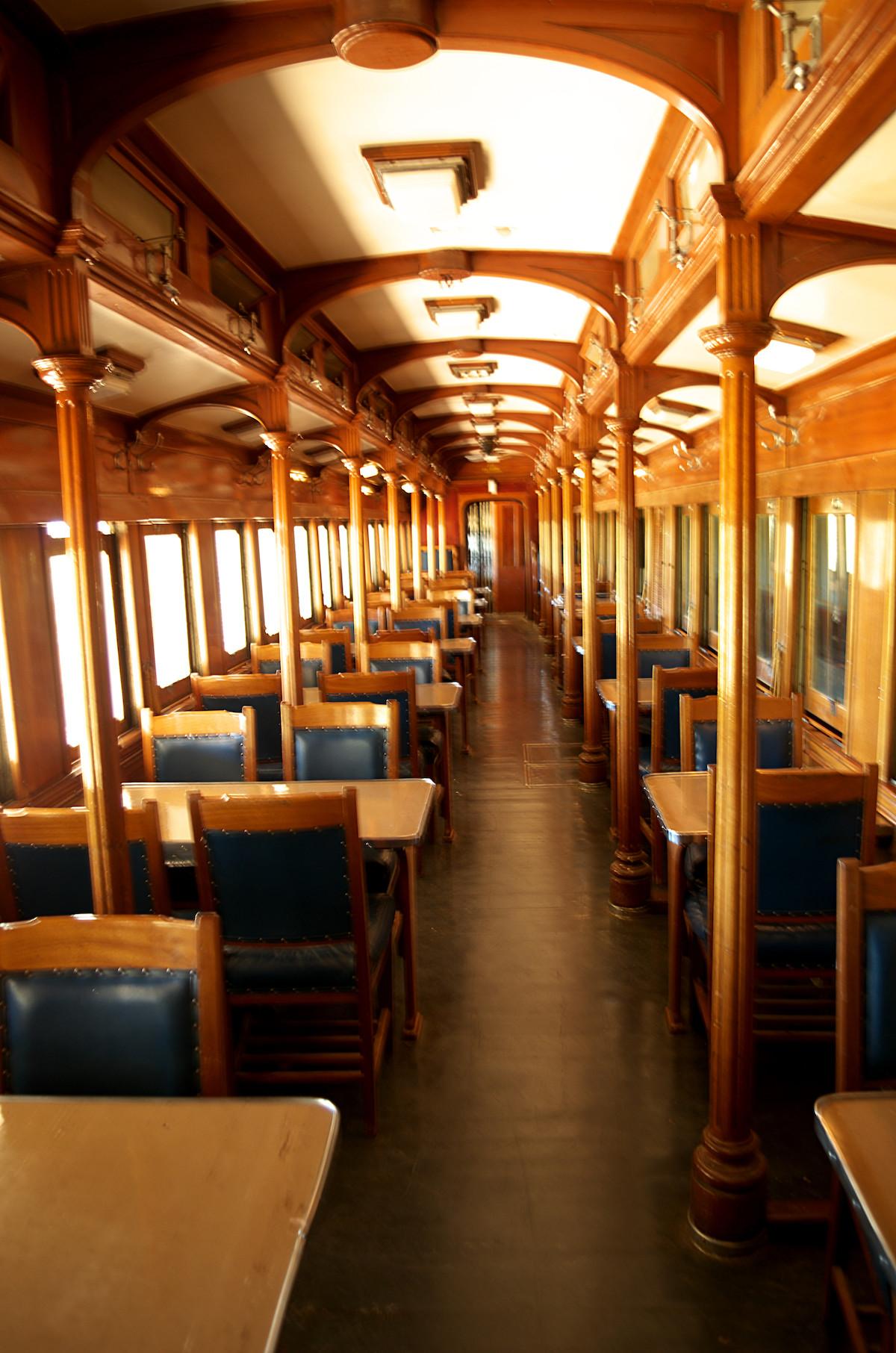 Jules Zimmerli was born on 1 September 1896 and appears in the S.A.R. Magazine for the first time as the Chef running the dining car that was a highly esteemed part of the British Empire Exhibition at Wembley (London) in 1924–25. He was promoted to Inspector of Chefs in the SAR Catering Department in 1926. At this point we are told that he had been in Railway service for 17 years, before which he had trained in a number of overseas hotels and restaurants (hard to believe, as this would have made him 12 years old when he joined the railways). 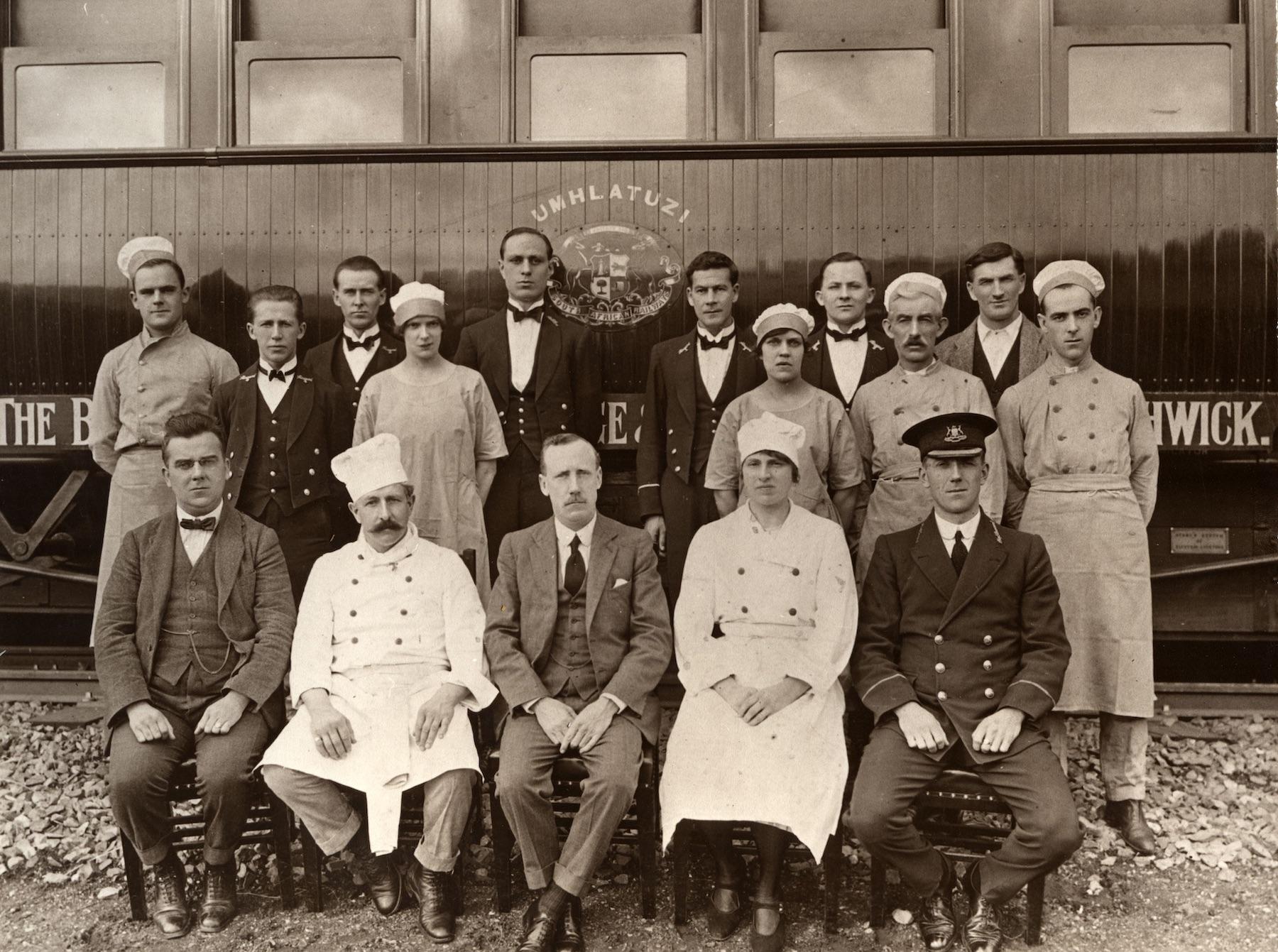 Crew of dining car “Wembley” at the British Empire Exhibition in London, 1924. The person seated second from the left, wearing a chef’s toque, is believed to be Jules Zimmerli. (Transnet Heritage Library)

It appears that he left the Railways service in 1930 (a bad time, one might have thought). He appears in the Government Gazette as having bought the Regent Bar and Restaurant, 174 Jeppe Street, Johannesburg, on 10 October 1930. Here he remained, evidently successfully, until July 1940, when he sold the Regent to a company called Vrede Hotels. The family interest in this transaction for me is that the lawyer handling the paperwork was my mother’s uncle.

I have not yet found when the Zimmerlis bought the Zoo Lake Restaurant (officially Zoo Lake Kiosk), but it must have been about the time Jules sold the Regent. The Zoo Lake operation was registered in the name of Georgina, Jules’s wife.

I remember the Zoo Lake Kiosk in this incarnation from my childhood. It was dark and gloomy, and the walls were lined with stuffed animal heads of a startling number of species, which became more than somewhat moth-eaten with age, each one glaring disapprovingly at the diners. This should have been a truly traumatic experience for a small child, but curiously it succeeded in putting me off neither good food nor wild environments.

Georgina Zimmerli sold the Zoo Lake Kiosk on 18 March 1960 to Constantinos Petrotis and Nicholas Candiliotis. As I recall, the first thing they did after taking over was to get rid of the stuffed heads and make the place light, airy and much pleasanter for (at least) small boys. As far as I know the restaurant remained light and airy for a long time, but became vastly more expensive than it was in those far off and palmy days. I am informed that in more recent years it changed hands and names at least once or twice, and like so many worthwhile features of urban life, has suffered from Covid-19 and the attentions of vandals.

The Zimmerlis moved a kilometre or two up the road to the then-new building of President Place, at the corner of Jan Smuts Avenue and Bolton Road. (This building has since been demolished and replaced.) Here they established a definitely upmarket restaurant called Chez Zimmerli, fondly remembered by more than a few Johannesburgers “of a certain age”. Jules Zimmerli died on 17 April 1967, but his widow, Georgina, maintained the restaurant for a while. At some stage, however, it became a limited company. A friend remembers that towards the end of this time the presiding genius of Chez Zimmerli was a certain Mr Thurman, whose son was at school with my friend, who fondly recalls the Zürcher Geschnetzeltes and Crêpes Suzette. Georgina died on 18 March 1975, and the restaurant was sold on 1 October 1978 and again on 21 August 1981, after which it vanished from history.

The story of the career of Kitchen Car 269 herself is an epic for another day, as is the story of her restoration. Suffice to say at this stage that in 1980 the decision was made that the Kitchen Cars 254, 267, 269, 271 and 272 would remain in service and used for duty on the Black Mineworkers trains between Johannesburg, Germiston and the Homelands. It would have been a hard life for 269 during this period. The kitchen cars were withdrawn from service in 1982 and sold at auction. No. 269 was the last remaining AA23 and was staged at Koedoespoort. It was later purchased at auction by Umgeni Steam Railway. If I attempted to tell any more here, I should be standing heavily and unnecessarily on USR’s toes – doubly unnecessary as they contributed most of this paragraph.

Suffice to say that an AA23 kitchen car “goes with” an A22 dining car, and sure enough there is one in the USR stable – no. 209 ‘Maputo’, which as it happens is a close match in age for the kitchen car. USR has supplied the information that ‘Maputo’ was bought at auction from South African Transport Services at Kaserne, Johannesburg by a Mrs Allsopp of Bar Circle Ranch. Mrs Allsopp in turn later sold this venerable carriage to Umgeni Steam Railway.

All of which raises the question, why go to all this effort? I have heard it said that the staff accommodation in the kitchen car would be useful at Kloof when trains are run on consecutive days, which is undoubtedly true. But I hope to live long enough to see ‘Maputo’ fully restored and operated together with 269 on what would pretty well by definition be rather special trains. One could (I hope) offer refreshments on, for example, the Special that goes to the Royal Show in Pietermaritzburg each year. Or one could look for an example to the Bluebell Railway, which runs a few trains each year featuring their Pullman kitchen-and-dining-car sets. They offer luncheon and dinner outings, at a price that this South African would consider eye-wateringly expensive, or afternoon teas at an only slightly lower fare. Is there scope for such an outing here?

Type A22 dining car in use - Hand-coloured lantern slide from Transnet Heritage Library.jpg 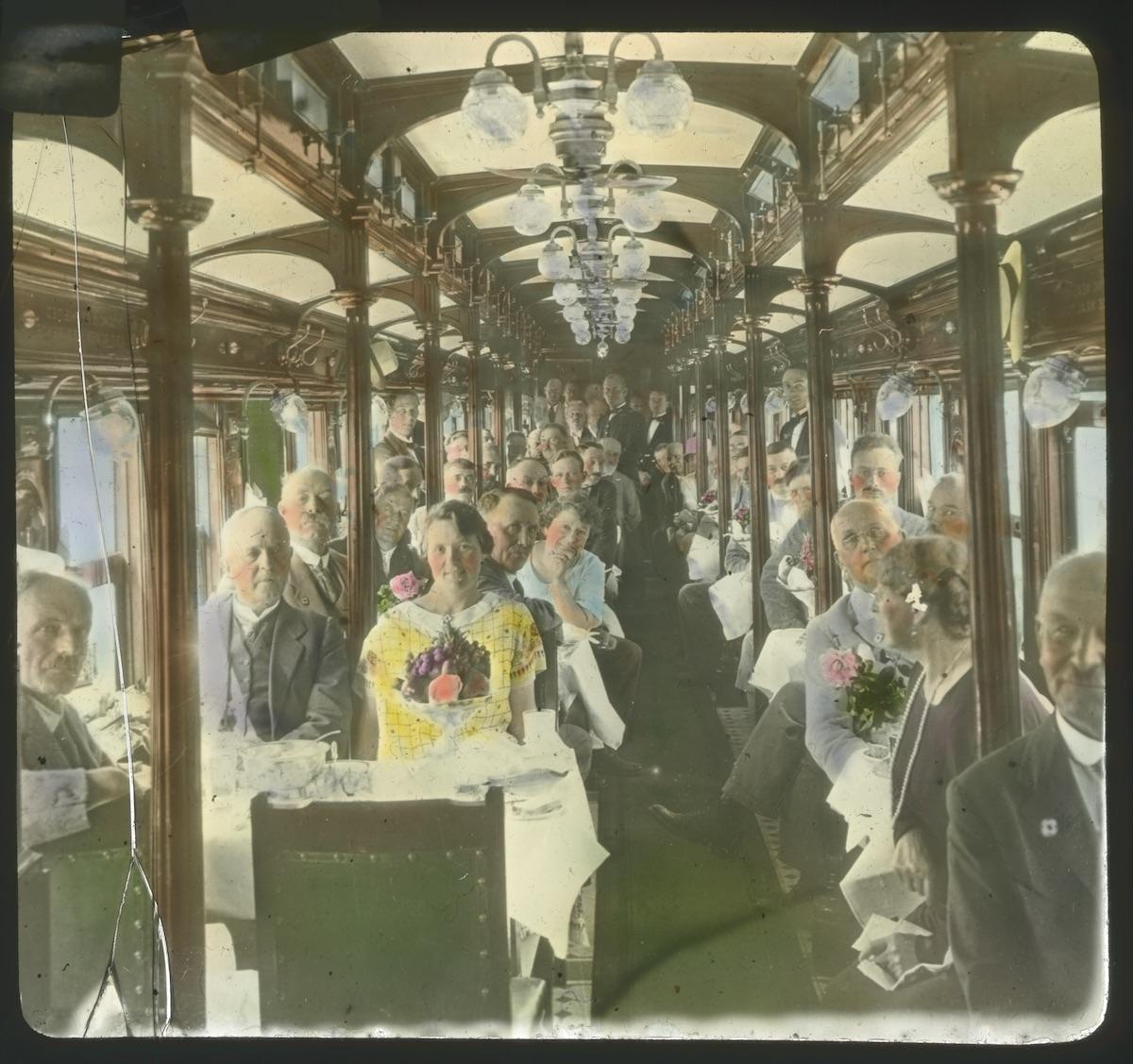 *** Umgeni Steam Railway runs steam trains from Kloof to Inchanga, both in the western fringes of Durban. Usually these leave Kloof at 08:30 and 12:30 on the last Sunday of each month, but intending passengers are advised to check and book on umgenisteamrailway.com before setting out. There is ample parking at Kloof, across Old Main Road from the station. Special additional trains are arranged from time to time. Changed Covid-19 regulations can result in changes to the schedule being made without notice. Booking is essential.

This story is slightly edited from a version that appeared in the Railway History Society Chronicle 57: 10–12 (2021).

Acknowledgements: Much gratitude is due to Ingrid Henrici, librarian at the Library of Parliament, for images of pages relevant to the Zimmerlis from the Government Gazette. A major thank-you to Yolanda Meyer of Transnet Heritage Library from the Aladdin's Cave that is the Transnet Heritage Library. Also to Marc Bouchier, Andy Anderson, Alistair Christison and Prof. Kathy Munro for assorted information and help.

About the author: Hugh Glen was born and grew up in Johannesburg. He studied botany at the Universities of the Witwatersrand and Cape Town, and spent almost all of his working career with Botanical Research Institute (now SANBI). He moved from National Herbarium, Pretoria to the Kwazulu-Natal Herbarium in 2004. After retirement he expressed an interest in the local branch of the Railway Society of South Africa (what small boy doesn’t love trains?) and found himself instantly catapulted into running their library at Inchanga Station. Since 2020 he has also edited the more-or-less quarterly Railway History Society Chronicle.