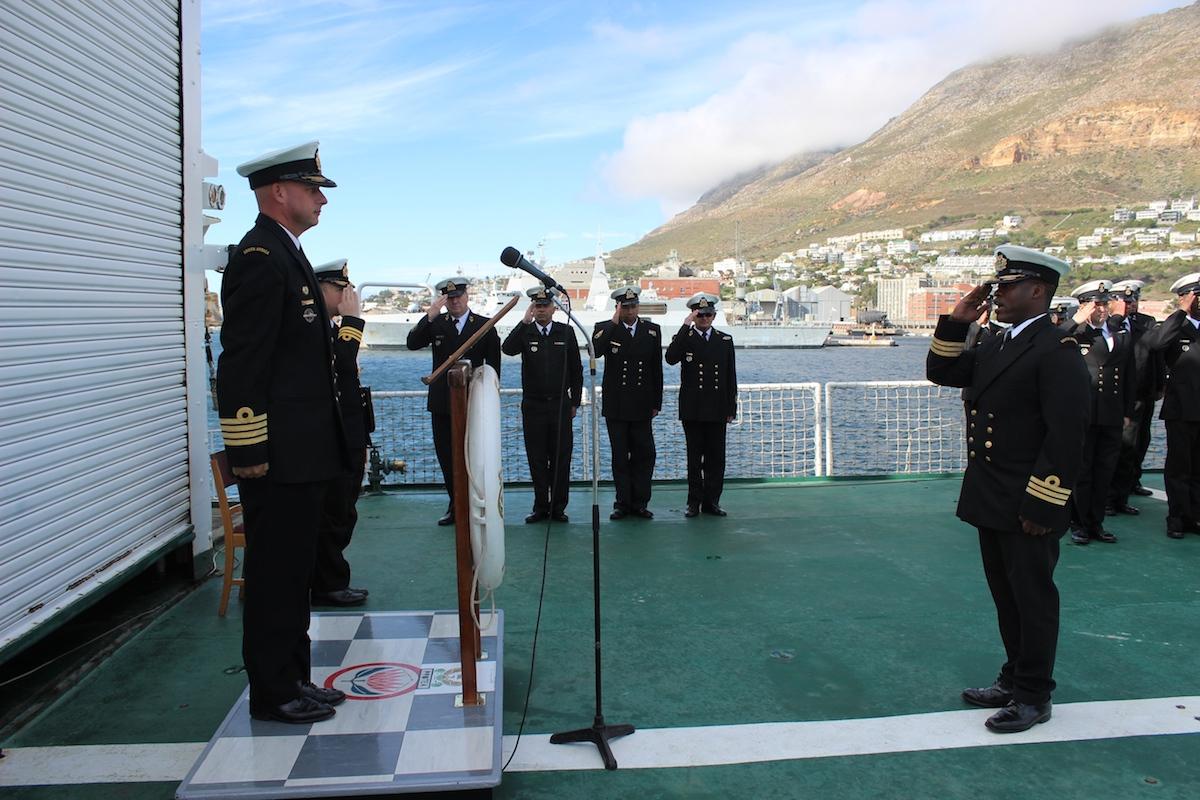 On 25 May 1978, the SA Navy hydrographic survey vessel, the SAS PROTEA under command of Capt C.J.H. Wagenfeld rescued twenty-six crew members from the Japanese crab fishing boat, the Kaiyo Maru No 1, which foundered off the Skeleton Coast of Namibia. Shortly thereafter, PROTEA was involved in another mercy mission to evacuate a heart attack victim from the tanker Texaco Sweden off the Namibian coast. SAS PROTEA was justly rewarded that year with the award of the SA Navy Sword of Peace for humanitarian efforts. 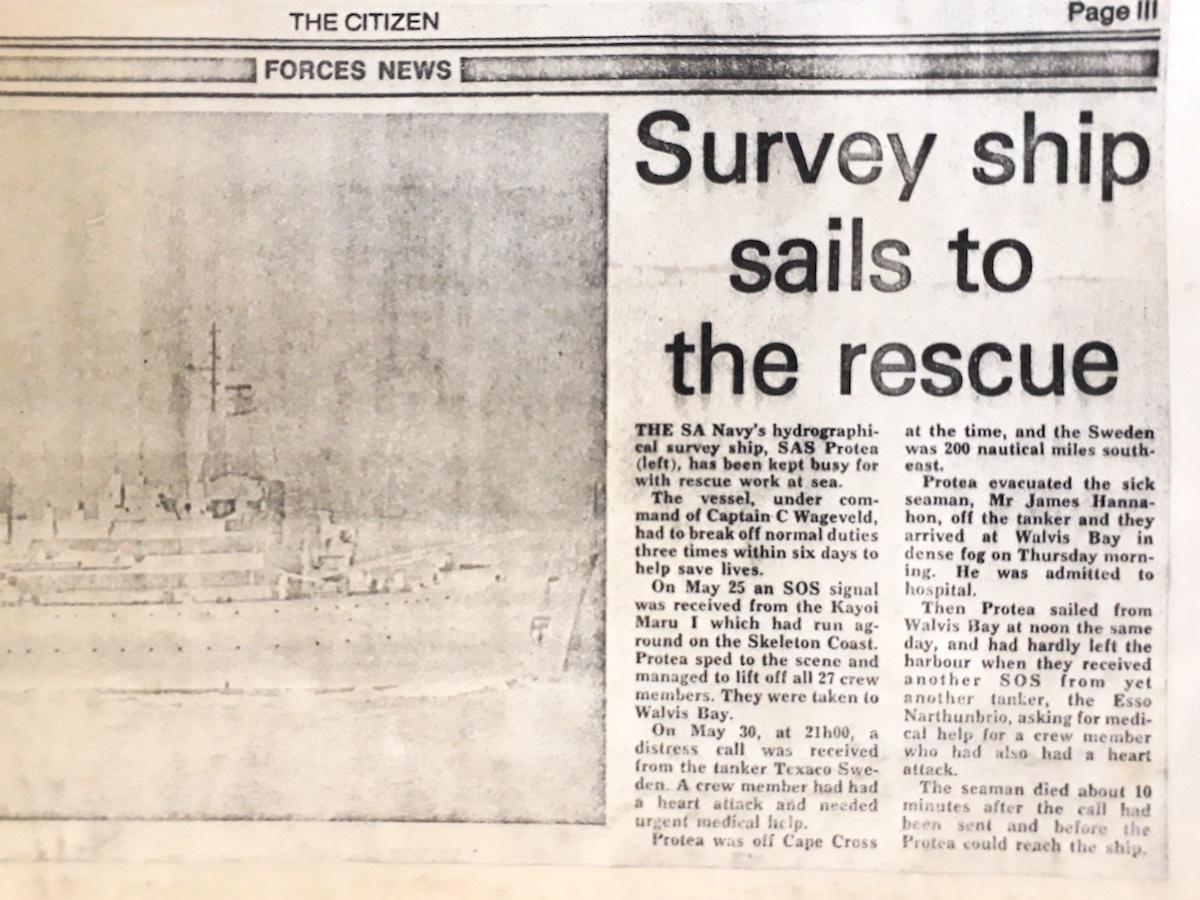 Article from The Citizen reporting on the recue

Rear Admiral Bernard Teuteberg (retired) provided a detailed account of how the rescue effort unfolded on 25 May 1978:

“I remember the day very well. I was working on one of the survey boats (running lines to and from the coast out to the 50 m isobath) in the company of the other survey boat (Pikkewyn and Skimmer).  The PRO was operating out of sight to the north of us.  We received a radio transmission from the ship, ordering us to cease survey operations and make our way north at best speed in order to join the ship.

PRO had received the distress call from the Kaiyo Maru and had determined that the stranding was to the north of her by some miles. She dispatched the helicopter with a full tank of fuel to search for the wreck, to report and to assist with rescue operations. Meantime we had caught up with the PRO and were hoisted onboard after which she turned north at best speed. The helo on arrival at the wreck site determined that it would take too long to hoist the stricken sailors and fly back to the PRO.  Decision was then made to airlift the sailors ashore and await the arrival of PRO (including Avcat fuel). Language was a problem and communication with the sailors very difficult.  After all the sailors had been dropped ashore the helo returned to the PRO for fuel, etc. Obviously the stricken sailors were perplexed seeing the helo disappear and started drinking a lot of whisky that came ashore with them. Once the PRO had closed the wreck the helo once again took off in order to bring the sailors onboard. I seem to remember that the helo could only airlift up to three sailors at a time and therefore the evolution took some time. On arrival onboard PRO the sailors were extremely happy and had to be tackled in order to keep their arms out of the turning rotors.  We then fed them, and made sure that they were dry and warm.”

About 10 years ago Mr Tielman Niewoudt, who used to work as a DIRCO personnel attaché at several South African embassies and consulates (now retired), discovered a Japanese Lacquerware fine art box in the store room of the South African consulate in Tokyo, Japan. Since embassy personnel frequently rotates he could not establish when the lacquer box was given to the Consulate-General as a token of gratitude for the rescue, by the SAS PROTEA, of the crew of the crab fishing boat Kaiyo Maru No1 when it was wrecked off the Skeleton coast. Unfortunately the inscription inside the lacquer box only stated the day and month of the rescue.

Japanese lacquerware are highly prized objects and esteemed gifts made by traditional fine art masters. Sadly, this beautiful gift from the rescued crew members and their employer was left behind, apparently forgotten, in the consulate's store room in Tokyo. Mr Niewoudt brought the box with him when his deployment to Japan had ended.  During a recent visit he requested a friend, Mr Pieter Viljoen, whose son currently serves in the South African Navy, to present the Japanese gift to the relevant SA Navy personnel.

Mr Viljoen contacted the Naval Museum and delivered the Japanese lacquer box to the Officer in Charge SA Naval Museum who then contacted the Officer Commanding of the SAS PROTEA, Captain Glen Hallett, requesting the formal handover of the Japanese gift to the ship, at an appropriate occasion. This occasion came just at the right time, as the SAS PROTEA celebrated its birthday (46 years in service on 23 May) and the Captain’s Divisions were scheduled for Friday 25 May to coincide with the actual rescue event off the Skeleton Coast in 1978. 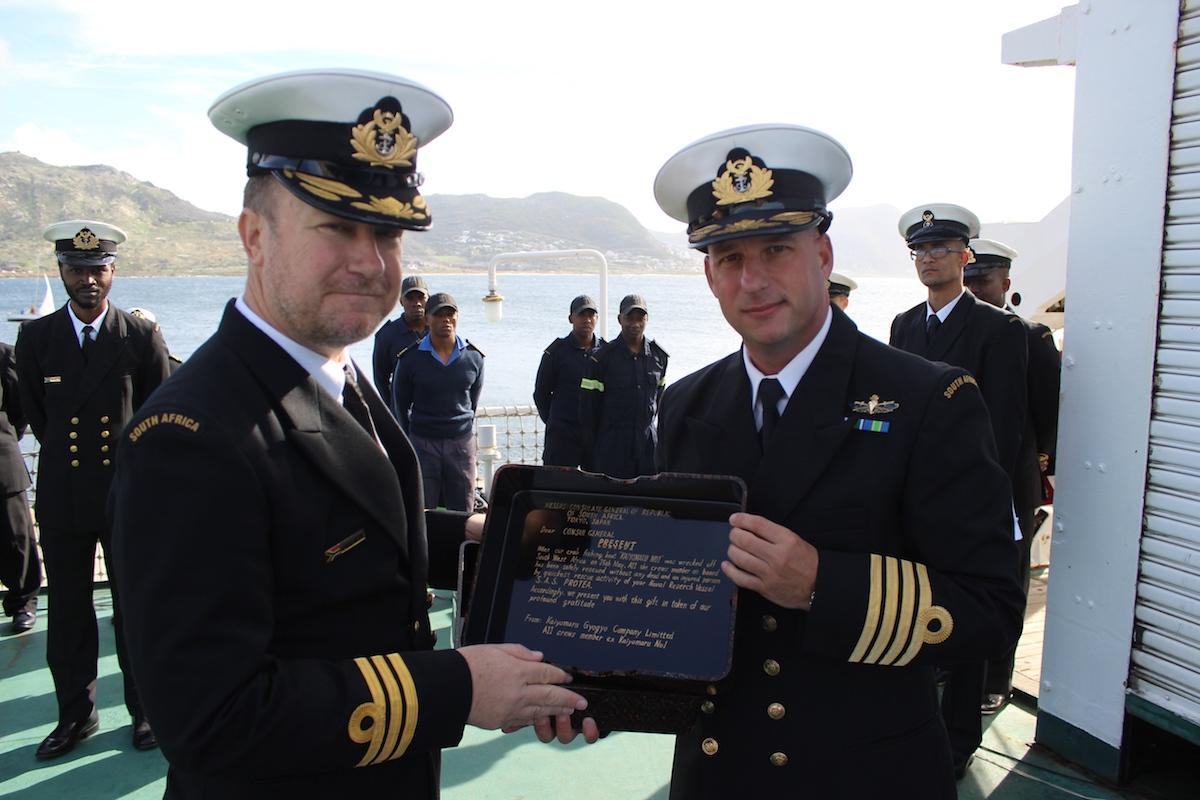 Formal handover of the Japanese gift to the ship (AB Khoza)

During his address to the ship’s company, Captain Hallett emphasised the proud history and heritage of SAS PROTEA. He emphasised that the vessel will continue to be an active part of the Fleet and that those that serve on her should serve in that manner. He praised the efforts of the ship’s company and several commendation and qualification certificates were awarded at the Captain’s Divisions.

Commander Leon Steyn is the Curator of the SA Naval Museum