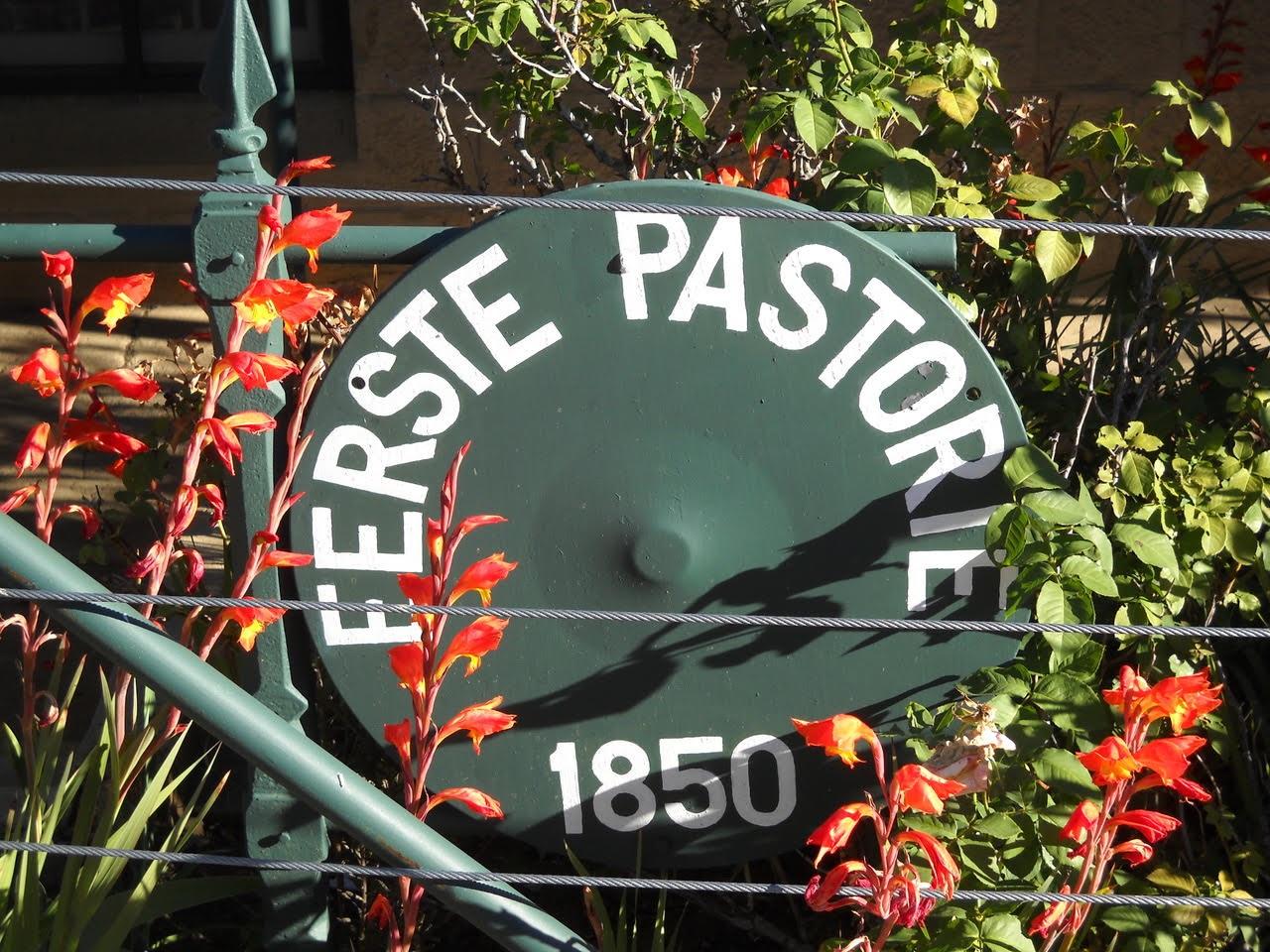 The Eerste Pastorie was built in 1850 in the newly formed town of Winburg in the Orange Free State of South Africa. It was a house built for the Dutch Reformed Church's Pastor or Predikant (the Dutch word for leader, in this instance Church Leader and is abbreviated as “ds" before his name). 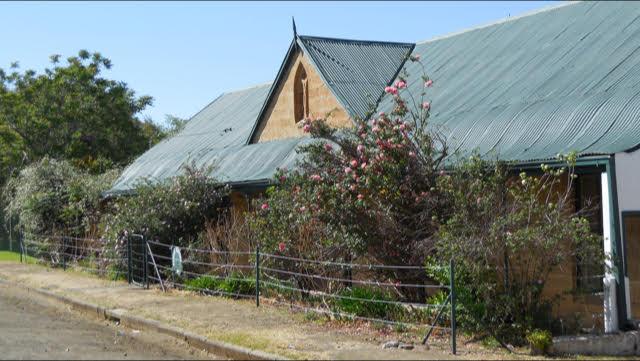 In 1848 regular church services started being held in Winburg and the Church Council authorized the building of a church. A Pastor, ds Dirk Van Velden, was appointed and he was to arrive in Winburg in September 1850 from Holland. 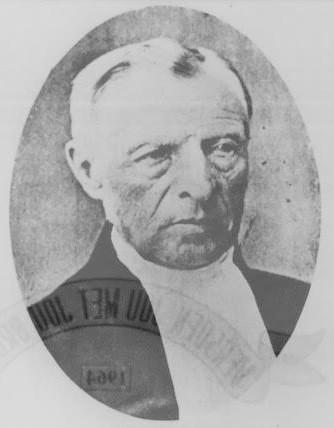 At the May 1850 Church Council meeting, the building of a house for ds Van Velden was tabled. It was to be built with the best building materials and with a roof of Tambookie grass. The house was built with 50 loads of stone and 40 000 bricks. Yellowwood planks and trusses were brought from the Cape by oxcart for the floors and roof. Unfortunately for Van Velden, when he arrived the house was not complete and he and his wife with 5 children had to live for 8 months in the church's backroom.

ds Dirk Van Velden and his family lived in the Eerste Pastorie from mid-1851 to February 1854, during which time the they recorded the first two births in the house, a daughter and a son. ds Van Velden was reassigned to Ladismith in the Cape and a replacement in Winburg was not appointed until 1861. It is not known what use was made of the house during the vacancy, Predikants from neighbouring towns likely used it during their visits.

When ds H Van Broekhuizen was appointed in 1861, the town was paralyzed with drought and the church was in serious debt. His five years in Winburg were not easy as the politics of the time were difficult and led to the Basuto Wars in 1865. Owing to bad health, he left Winburg in April 1866. To the Pastorie’s benefit, the grass roof, which was leaking during the rainy season, was repaired in 1863. 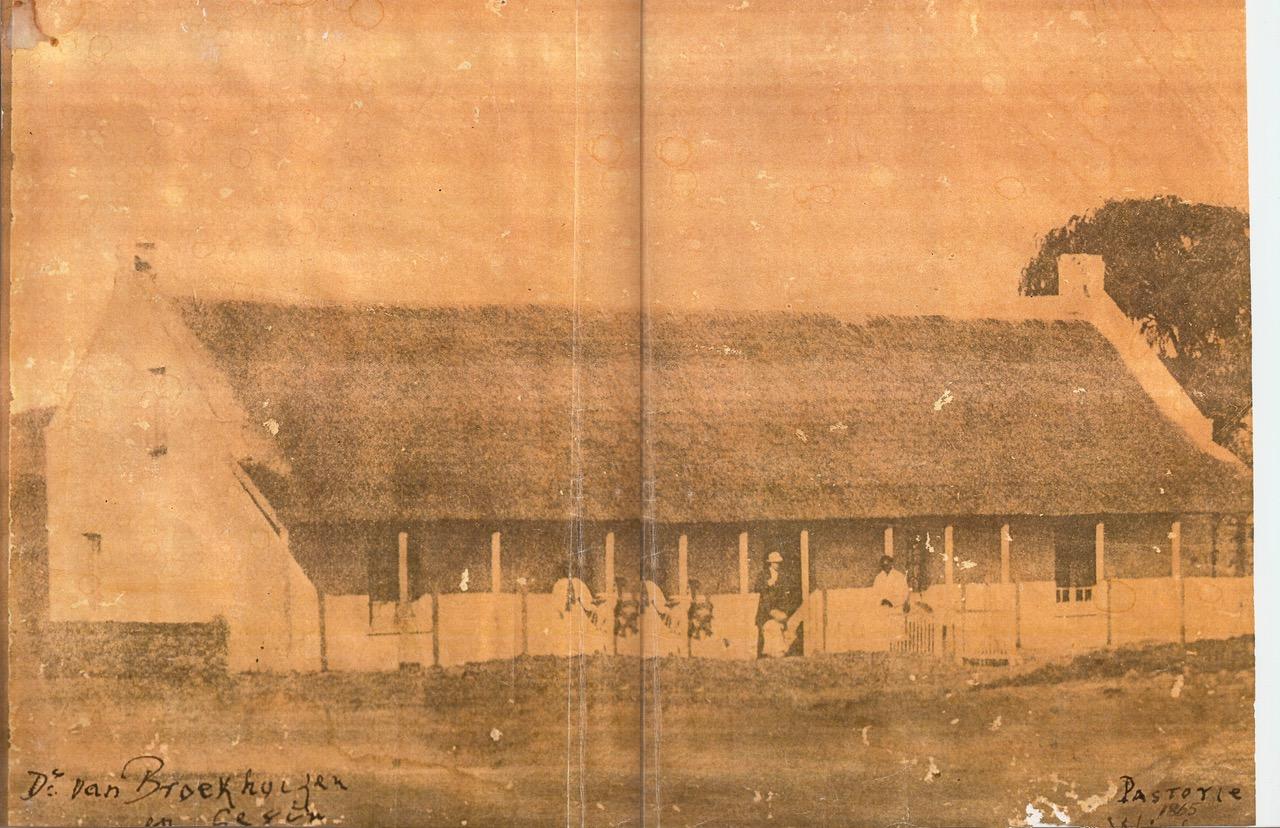 A short vacancy followed, but in July 1867, ds Pieter Adriaan Coenraad van Heyningen from Kroonstad was appointed as the third Predikant. He held this position in Winburg until December 1893. During his time, the town and congregation grew. His family also grew, and in 1882 numbered nine children. The old building was also having greater problems with damp in the foundations, and in 1882 was taken down and rebuilt on higher foundations. A larger house with dressed sandstone walls was built. ds Van Heyningen’s youngest daughter, Caroline laid the Hoeksteen at a ceremony on 9 March 1882. She tells the story in her memoirs written when she was 80 years old, as well as many insightful tales of goings on in the Pastorie during her childhood. 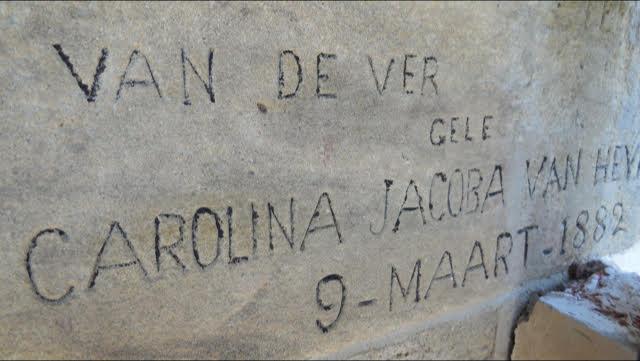 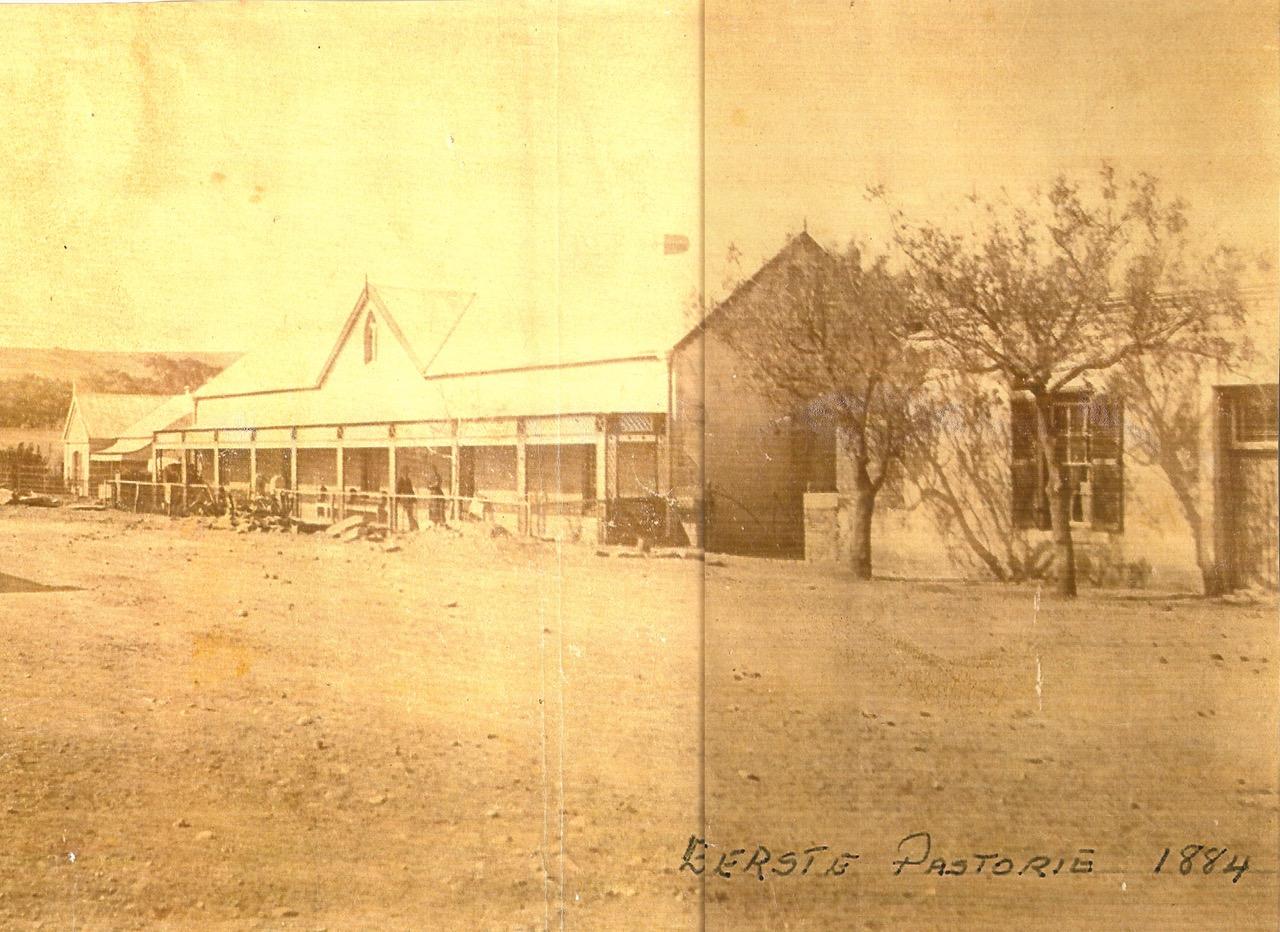 The Predikant was possibly the most important man in the community and hosted important visitors from all over the world, both in Church matters and political matters. President Reitz of the Orange Free State was a regular visitor staying the Pastorie.

ds Van Heyningen returned to Holland when he retired, but did return to South Africa to visit his children and was caught up in the Anglo Boer War, resulting in him being incarcerated in Norval Point Concentration Camp. The new Predikant in Winburg, ds Jacobus Johannes Tier Marquard lived through the War in the Pastorie.

At the time of his appointment in 1894, Winburg had over 3000 residents, the Free State numbered over 100 000. The town was about to celebrate the arrival of the first train, in 1898. Church Council approved the building of a new church and the Hoeksteen was laid by OFS President M T Steyn on 20 January 1899.

But the specter of war hung over all these achievements. When it was declared on 12 October 1899, turmoil spread throughout the town. Commandos left for both Ladysmith in Natal and to Kimberley. Initial Boer successes were followed by an advance on Bloemfontein in March 1900 by the British. The Free State was occupied from then on.

ds Marquard had joined the commandos as a “padre” and was captured at the surrender of Golden Gate in July 1900 and sent to a POW camp in the Cape.

From the outbreak of war to the end, his wife Margaret wrote frequent letters to her mother in Stellenbosch from the Pastorie in Winburg. Therein she details daily life through the traumas of the war, from baking “biskuit for the commandos” in the kitchen hearth (still in use today), to the expropriation of first the horses, then the carriage and finally the house by the British. 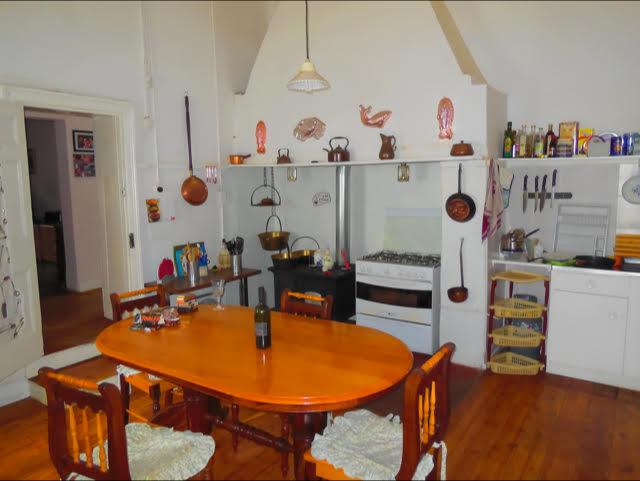 A recent photo of the kitchen (Grant Hendrey)

After the war, the Marquards returned to Winburg and started the Orphanage which for most of the rest of the 1900’s was a famous feature of the town.

The new church was completed and consecrated in 1904. ds Marquard accepted a call to Bloemfontein in that same year, but sadly at the age of 42 contracted enteric fever and died within 4 weeks.

In 1906, Willem H Boshof became the town's minister and lived in the house until 1918. Aside from the continued development of the “kinderhuise”, he was the incumbent during the split of the congregation. The final skirmish of the 1914 Afrikaner Rebellion occurred on 12 November 1914, when General Louis Botha attacked the camp of General Christian De Wet at Mushroom Valley, near to Winburg. 22 Rebels were killed and 6 Union soldiers. General De Wet escaped but was later captured near Kuruman. The town was divided, as was South Africa, over the issue to support either the British or the Germans in the First World War. The Mushroom Valley skirmish led to the naming of the Union supporters in the congregation as “having blood stained hands”. By 1917 a second NGK church was built in Winburg, and the division continues to this day. 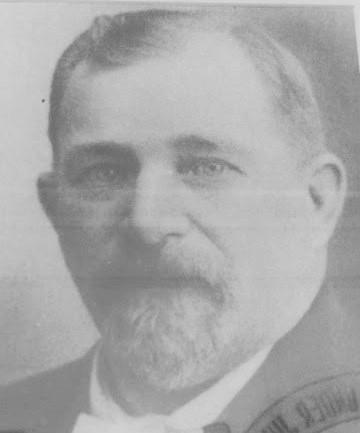 The obvious stresses of these events during his time possibly led to his sudden death in 1918 whilst visiting relatives in Kroonstad He was succeeded by ds Herman Christian John Becker, who served thirteen years as Predikant for the now considerably smaller congregation.

Joachim Jan Hendrik Hattingh was appointed in 1932 and was the last Predikant to live in the Pastorie. During his time, the church installed a new organ, claimed to be the biggest the the Free State. His wife was the organist up until his retirement in 1947.

In 1947, the Dutch Reformed Church built a new parsonage, the Tweede Pastorie in Victoria Street, and sold the Eerste Pastorie to Mr H. L. Weyers for £2000.00. His wife Suzie S. Weyers lived in the Pastorie until her death in 1998. Although the church no longer owned the house, a relationship continued in that Suzie Weyers was the church's organist, having taken over this role after ds Hattingh’s retirement.

In 1998, J. O. Van Jaarsveld bought the house after a period of vacancy. Unfortunately the house was broken into whilst unoccupied and the ornate chandelier and door to the dining room was stolen.

The house was resold in 2000 to Mrs N. Joubert who lived in the house up to 2012, although she had sold it to Mr D. G. Hendrey in 2007, who is still the current occupant, and author of this article. 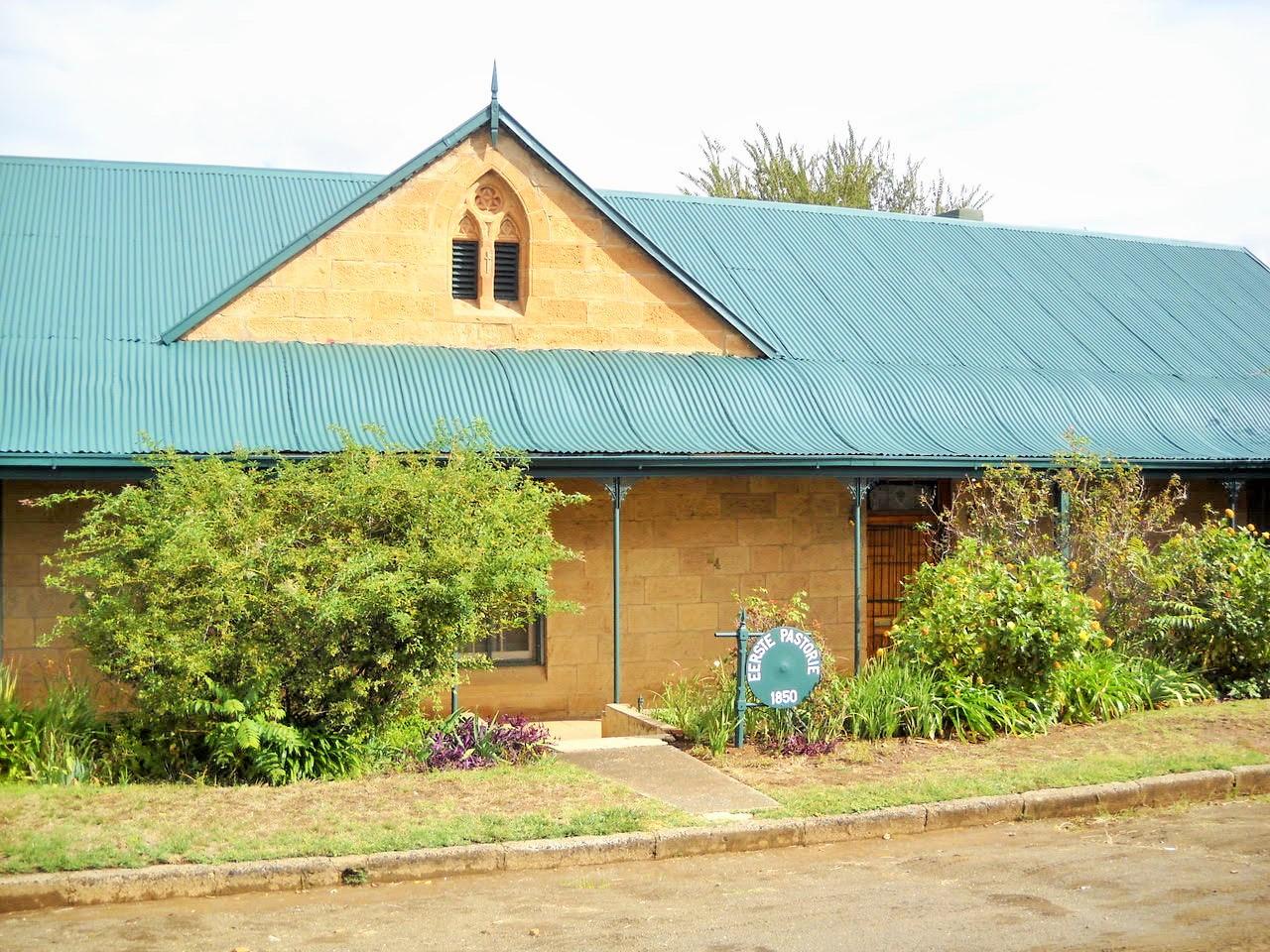 Today the house still has its oregon floors and ceilings, the ceiling is in fact another floor, the roof trusses spanning from each side to the centerline without any internal support. The roof is corrugated iron, with a shaped front over the veranda. The oregon sash windows are still in use, as are the two cast iron Victorian fireplaces. The front walls are still in good condition, a testament to the craftsmanship of the masons who cut and prepared these large sandstone blocks. 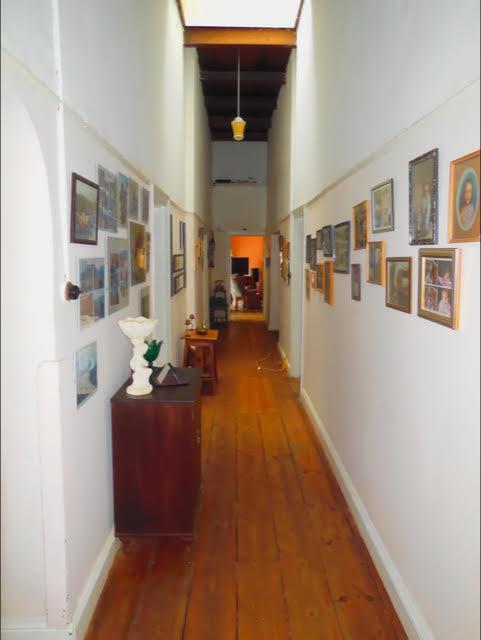 The base of the original yard to garden wall is still visible, and it was in this area that the well used to be.

The outside carriage house is now a narrower than standard double garage, the original stable still contains the 5 animal tie up manger. The horseman’s room has a horse shoe over the door as a moment to its original use. Surprisingly often, mementos from the past rise up in the ground, or from gardening activities. These are mainly pieces of broken crockery or bottles, but a variety of metal objects have also been found.

Today the house is looking for a new owner, one who is sympathetic to its historical value and who will ensure the house makes it to its third century (click here to view notice). From research, the house can claim to be the oldest continually lived in house North of the Orange River. The three older houses, Bethulie, Philipolis and Winburg have not been lived in for years and survive as parts of museums. No house in the old Transvaal can be found this age.