Prospecting for gold in the 21st century

In the article below, journalist Lucille Davie ventures across old Joburg mining land tracking the activities of 21st century gold prospectors. She reveals the secret nature of their enterprises and describes the innovative processes used to extract the gold from multiple sources. The article was originally published on the City of Joburg's website on 4 October 2006 (Joburg's 120th birthday). Click here to view more of Davie's work.

I took a walk where miners with rudimentary tools first found gold in Johannesburg.

Right across the original reef – from Roodepoort in the west to Benoni in the east - there are pockets of individual miners working minute deposits of gold, in much the same way as miners searched for gold 120 years ago.

Described by Willie Laing, mineral resources manager for Crown Gold Recoveries, as “dassies”, or rock rabbits, these people are very elusive, and disappear into the undergrowth before they can be approached.

“Now you see them, now you don’t – their heads pop up, then disappear.”

I was told about these miners while on the hunt for another story, and the idea intrigued me.

Laing and his assistant, Patrick Mogane, survey field officer, agreed to take me along on a trip to look for the elusive miners.

Laing explains that the miners are mostly from Mozambique, but were probably previously formally employed in the gold mining industry in Johannesburg or surrounds.

He says they probably have old plans and maps of the early mines, perhaps even photographs. From these they would know where the old assay offices were, or where old equipment was, where fine gold fragments would have been dropped. It is from these areas that they would collect samples of soil for their own operations.

Looking down an old Joburg mine shaft - Heritage Portal - 2012.jpg 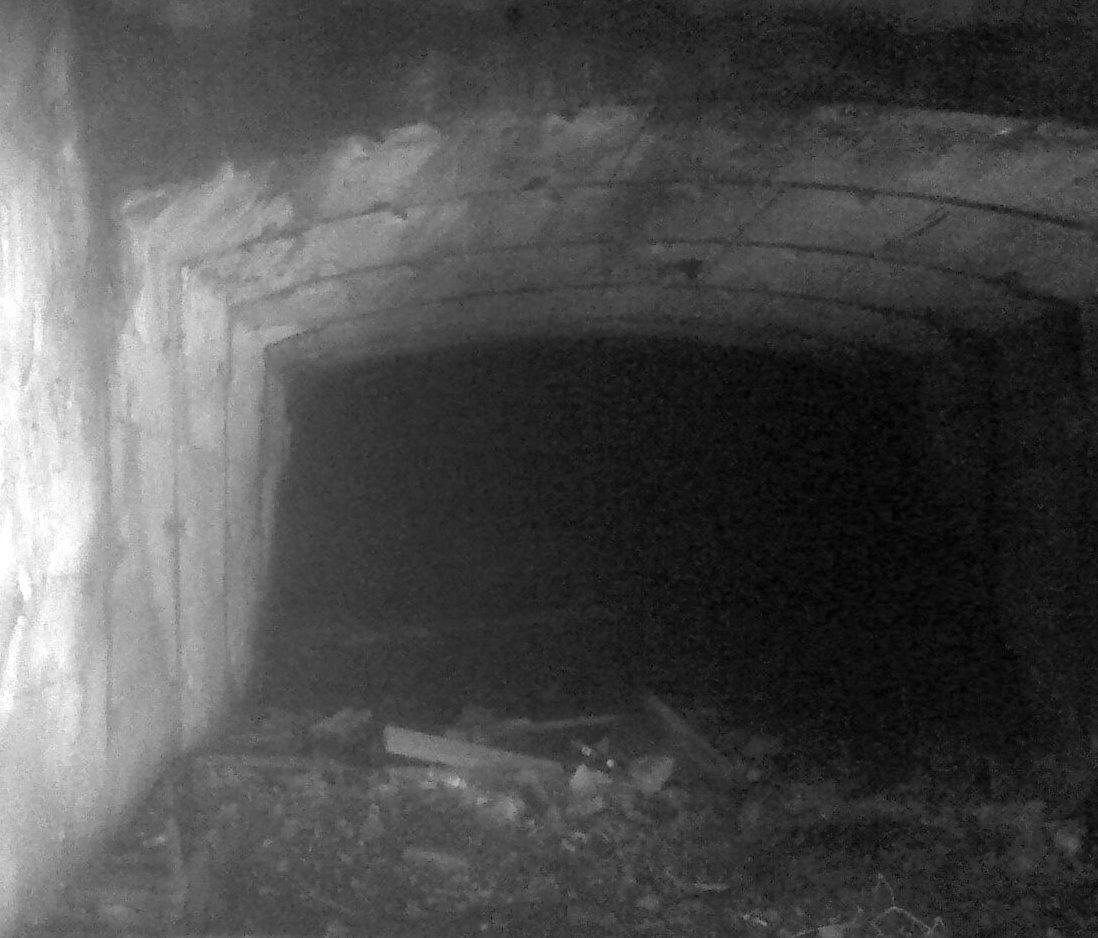 Looking down an old Joburg mine shaft (The Heritage Portal)

We travel west along Main Reef Road to where a large mine dump is being reclaimed, a process that has been ongoing since the early 1980s, with around 800 000 tons of sand being processed each month. So far some 87,9 tons of gold have been recovered from the dumps in and around Joburg, says Henry Gouws, general manager of Crown Gold Recoveries. This equates to R12-billion at current gold prices, he adds, which is “serious gold”.

He reckons that the reclaiming will continue for up to another four years, after which the operation may move to a more productive area, either east or west of Joburg, depending on the level of the gold price.

We turn off into the deserted workings. A mine dump, with huge bites out of it where loads of sand have been removed and channelled to the works at Crown Mines, dominates the scene. Dozens of mature wattles and scrubby bushes are scattered between mounds of sand. The skeletons of large rectangular concrete basins lie in a row, all that is left of the intense mining operation that began in 1886, when George Harrison found gold in rocky outcrops at Langlaagte. The basins used to be the receptacles where the rough gold rock was crushed. 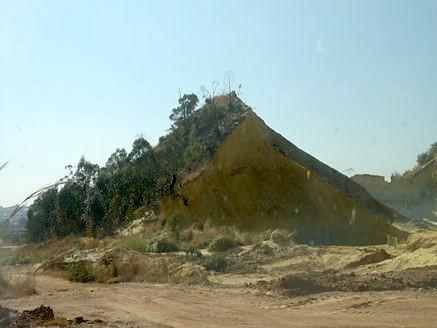 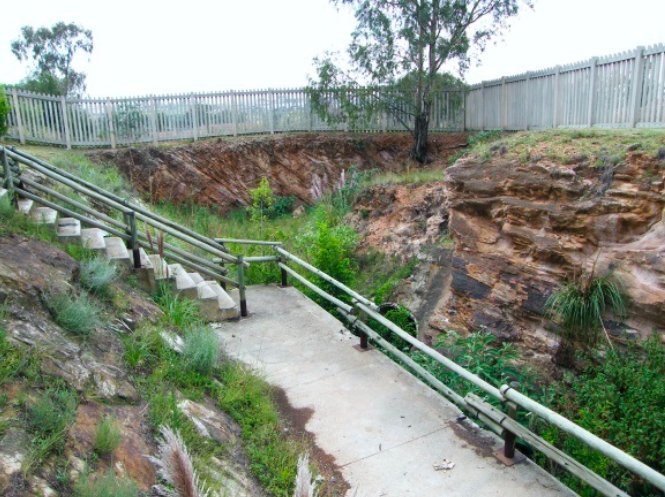 It is from the concrete that fine traces of gold are being extracted. Laing explains that with the pounding and vibrating of the equipment, fine fragments of gold would have become lodged in the concrete walls. Now the miners chip at the concrete, and grind those chips into dust, and by means of flushing the sand through troughs, they filter out the gold dust.

Several of these hard-packed troughs are visible, lying at a low 45° angle, but they’re dry - they were abandoned some time ago.

The miners also collect soil from old railway sidings and around the entrance to shafts. They’ll chip off rust from any metal in these areas – it could contain tiny fragments of gold.

The miners make the soil into a slurry, then run it down the trough, which is lined firstly with plastic sheeting, then squares of carpeting, perfect for collecting gold dust or “free gold”, which they obtain using mercury or cyanide.

Laing estimates that they probably earn about R50 between two or three men, or half a fingernail of gold. It’s possibly worth around R1 000 on the black market.

After stopping at various other spots, we abandon this site and move across the road, to an area adjacent to the New Canada Dam.

Laing says that this is more likely to yield success as these 21st century miners need water for their rudimentary operations.

We park and walk towards a row of concrete basins. Mogane goes walking beyond the basins. We try to stay as quiet as possible, so as not to scare away the miners. He waves to us. We hurry over, through the undergrowth, over mounds of earth and chunks of concrete. He has found an encampment.

The men have cleared a tunnel from under a large, round concrete basin, and with sheets of plastic and old blankets, have created a sleeping area. In the clearing are the remnants of last night’s fire, covered with a small braai grid. Nearby are plastic tubs, plastic bags and sacks, and strategically placed rocks, obviously used as seats. The bare rudiments of life.

Laing comments that these miners live close to the edge. “I admire them for what they are doing – this is hard, hard work.”

In the past, says Laing, there was an active effort to confiscate their mercury or cyanide concentrate, the basics of their operation. But then there were “lots and lots” of them in the Joburg area. Laing says they’ve mostly moved on, probably to the Ekurhuleni area.

”The gold branch has arrested some of them,” he says. Laing has reported them to the police periodically. “They are stealing our gold,” he says.

”They are stealing but they’re not breaking and entering.” There are safety concerns – they dig under structures which have the capacity to collapse on them. The mercury and cyanide they use is dangerous to their health. 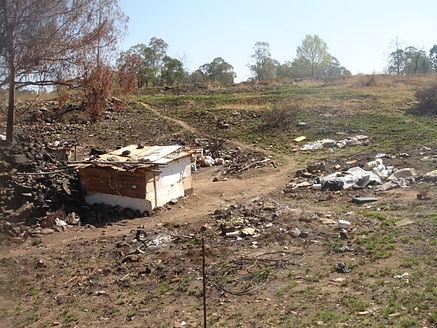 Andre Cronje, the department of minerals and energy regional manager of mineral regulation for Gauteng, says the department is trying to get them more formalised, possibly into a consortium.

He explains that they have had success with the groups working in Ekurhuleni, where the largest number of men are working, possibly around 300. The idea is to team the miners up with environmental companies and to get them involved in “more constructive” work, like an environmental clean-up operation.

Cronje is concerned with having them work in a healthy, clean and safe environment. He even talks of raising capital, and acquiring machinery, to make their operations “more efficient and productive”.

”There is so much residue in these areas, it will keep people busy for years,” he says.

He hopes too, that once the areas are clean, other informal groups will be discouraged from creating encampments.

At the same time he says the department is not against small scale mining, saying that these small-scale operations continue all over the world.

Laing clearly has a soft spot for these 21st century prospectors. “I have respect for these guys – I don’t want them to be threatened.” He would like to see them incorporated into the official mining fraternity, working safely and legally.

Laing, Mogane and I get back in the car – they have eluded us again. We move a kilometre or two further west, and stop the car about 40m from an encampment. It consists of a locked shack, a rudimentary fireplace, a stack of empty 2L plastic coke bottles, and various bits of camp oddments.

Mogane strolls over towards the dam, and discovers a newly abandoned trough. The strips of carpet are still wet, and have been roughly thrown off the damp trough. I ask him to demonstrate how the miners operate the trough.

He picks up the strip of plastic, arranges it on the trough, then covers it with the squares of carpet. He grabs a spade, tips a spadeful of sand into a bucket, walks over to the edge of the dam and fills the bucket. He pours the contents down the trough and it trickles over the carpet, sinking into the fabric. 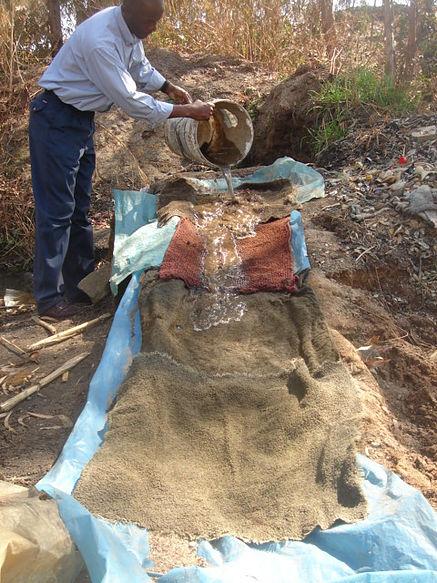 We look around but there’s no sign of them. The dam is edged with tall reeds, the undergrowth is thick beneath the trees. They could be watching us from its depths.

We walk back to the encampment and see a man some 50m away. We whistle and call to him. He strolls over. He is probably over 60, and says he is collecting metal for recycling. Laing is doubtful, saying they all use that excuse. Laing asks him about the miners, but he pleads ignorance. Laing gives him R10 and he walks away.

We turn to go and see another man up the road, with a pick over his shoulder. This looks hopeful. We call him over. He also says he is collecting metal and is not forthcoming about the men living and working at the site.

He walks off down the road, with his pick over his shoulder, looking just like a miner of old.

We give up - the dassies have won. 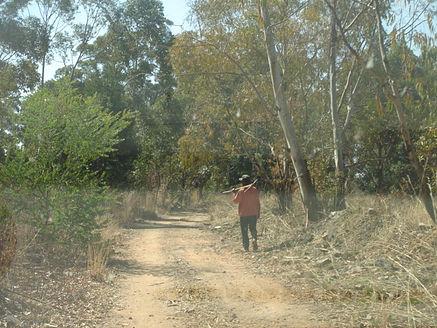