The Scheffel Bogie and the Rail Gauge 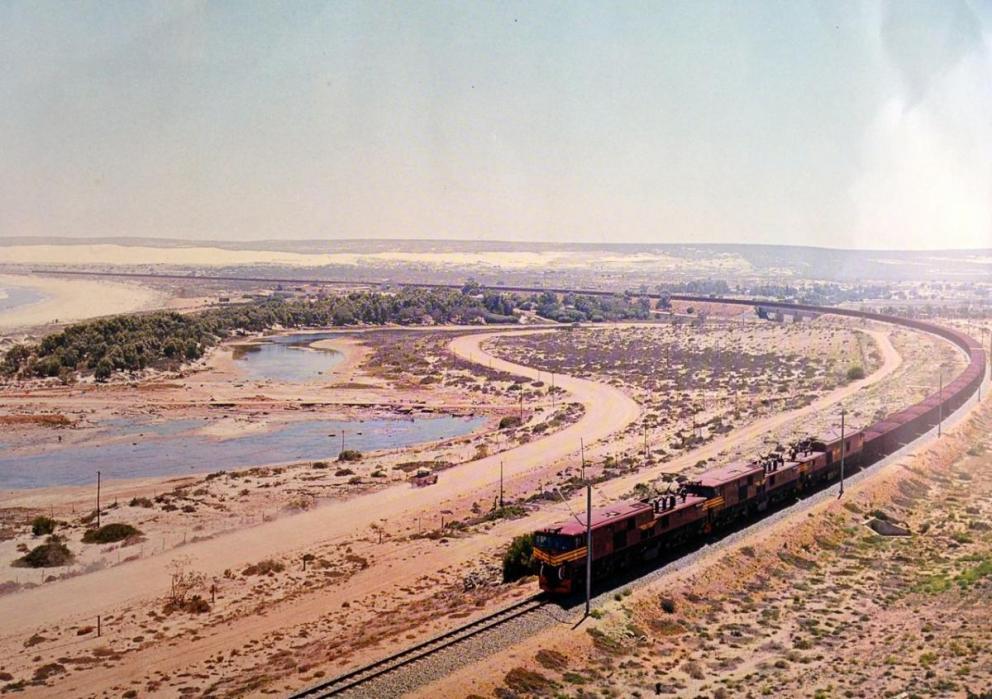 Present day Southern Africa has inherited its railway gauge from a bygone era of 142 years ago, when in 1873 the decision was made to reduce the gauge from 4’-8½” to 3’-6”, when the Cape Government Railways (CGR) planned its extension from Wellington to Worcester for the reasons why see “Ox Wagon to Iron Horse” - click here to view. The extension was the first phase of a railway line that would finally link Cape Town with the diamond fields of Kimberley, the latter being reached by 1885; the year before the discovery of gold on the Witwatersrand.

The purpose of constructing the railway line was two fold, firstly to speed up the journey to and from Kimberley and secondly to transport heavy goods and its building became the impetus for the laying of more tracks from the ports to the interior. The CGR led the way in railway construction right up until the end of the 19th century and strongly influenced its neighbours, Natal and the Boer Republics, in their choice of gauge; as a break in gauge would have had negative logistical and economic consequences, as was to be the case in Australia where each state chose a different gauge, which thus precluded through running.

Cecil John Rhodes had in common with his contemporaries John D. Rockefeller (oil), J.P. Morgan (banking) and Andrew Carnegie (steel) the desire to build a business empire. When Rhodes became the Prime Minister of the Cape in 1890 (he had been the MP for Barkly West since 1880), he combined his wealth and his political “nous” to expand the British Empire in Africa. His business field was the exploitation of minerals from the earth’s crust and he sought to find new natural resources in the interior of Africa by opening up the Dark Continent with the building a railway from Cape to Cairo (see “The Cape to Cairo Railway Dream” - click here to view. The fact that that fabled railway was never completed matters not, what it did do was to make the railways of Southern Africa adhere to one gauge – the Cape Gauge of 3’-6” (1 067mm). An exception was the railway network of East Africa where the Metre Gauge (1 000mm) was preferred, however in the context of making a comparison with the Standard Gauge of 4’-8½“(1 435mm), the Cape and Metre Gauges stand as one.

In recent times the Cape and Metre Gauges have been heavily criticised, by politicians, as the reason for the run down state of many railway systems in Sub-Saharan Africa and that the only solution to the problem is to convert to the Standard Gauge. Nigeria and Kenya have both contemplated changing to the Standard Gauge and South Africa has already built a rapid transit line between Johannesburg and Pretoria to that gauge - the “Gautrain”. 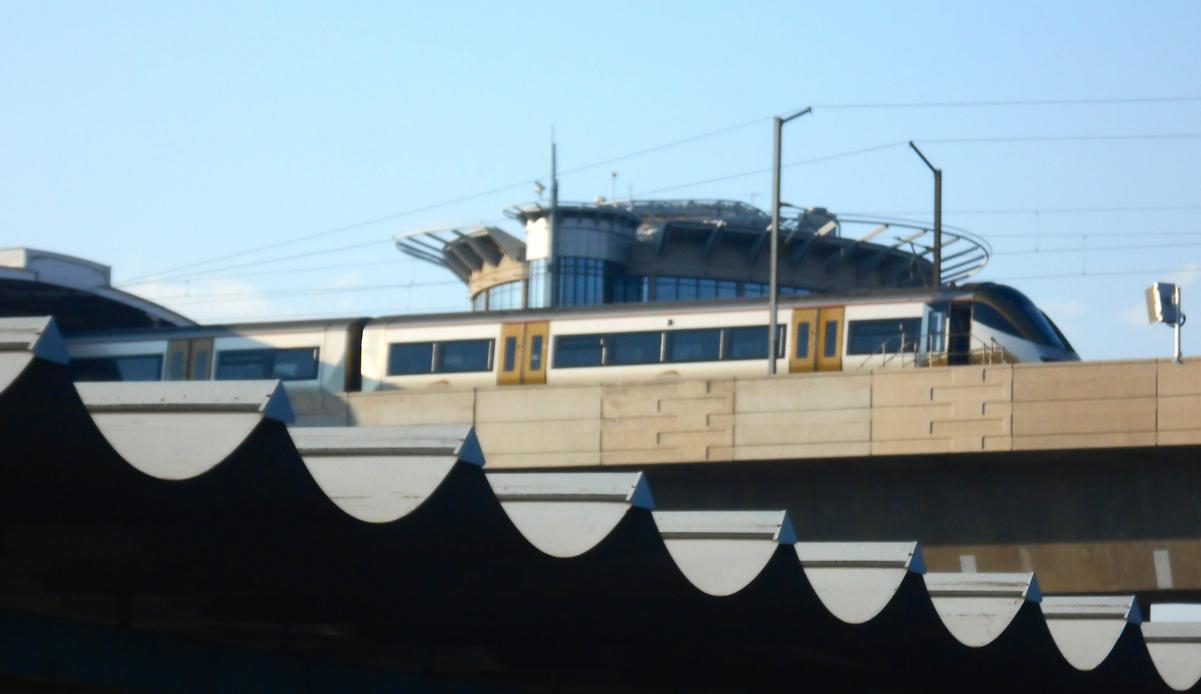 Gautrain arriving at OR Tambo Station

The main technical criticism of the Cape Gauge has been that high speed running was not possible due to instability on curves and this was a determining factor in choosing the Standard Gauge for the “Gautrain” so that a speed of 160 kph (100 mph) could be attained. The decision discounted the existence (since 1975) of a technological breakthrough which enabled speeds of 245 kph (152 mph) to be reached on the narrower Cape Gauge.

The problem of speed and stability exercised the mind of a mechanical engineer working for the South African Railways (SAR), which led to the design and fabrication of a new high stability bogie (or truck in USA parlance) that could run at higher speed without derailment. The inventor of this bogie was Dr. Herbert Scheffel and he was given the recognition that was his due when he received the Shell Prize for Industrial Design in 1975 and the Gold Medal of the Association of Scientific and Technical Societies of South Africa in 1976. Over the last forty years the Scheffel Bogie has seen constant development with many thousands going into service here and abroad on Metre, Cape and Standard gauge railways. 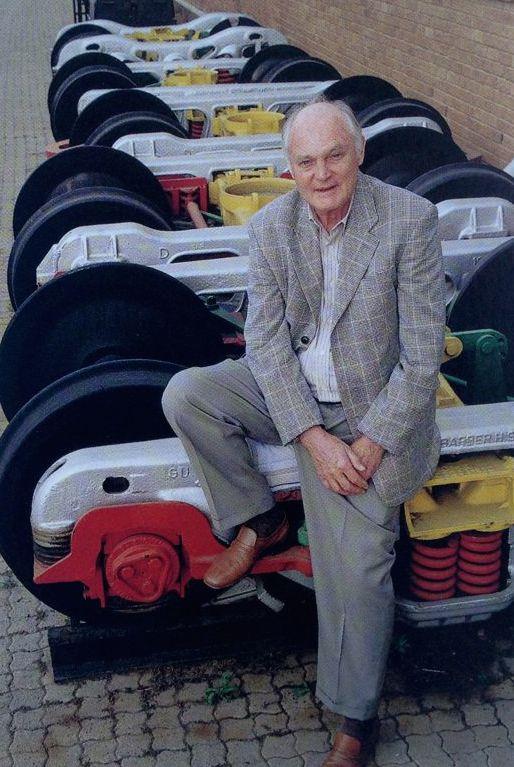 Dr Herbert Scheffel with different generations of his invention at the Transnet Pretoria Test Centre (photo by Graeme Williams in The Hidden Edge – Quest for Progress, Innovation in South Africa)

A bogie is a four-wheeled undercarriage positioned at each end of a goods wagon or passenger coach and it is used for the purpose of running along the rails and transferring loads to the rails. Before the invention of the Scheffel Bogie previous types of bogie chassis were rectangular on plan and rigid. Herbert Scheffel proposed a flexible “cross anchor” bogie with a high wheel profile that not only allowed the inner and outer wheels to accommodate each other on curves but also dampened the lateral forces that caused vibration. The Scheffel Bogie first went into service in 1975 with SAR’s fleet of ore wagons and proved a great success as it reduced wear on both wheels and rail heads and provided a stable vibration free ride.

South Africa has in order of 20 000 route kilometres of railway, added to which there are the railway lines of our neighbouring states, all running on the Cape Gauge (a legacy of our colonial past). There has been much debate on the subject of the preferred rail gauge when upgrading our trunk lines, especially the Gauteng to Durban main line. It would seem absurd to change to the Standard Gauge when there is so much through traffic from north of our borders and should extra speed and capacity be required a ready solution exists in the Scheffel Bogie which can bear heavier axle loads and faster running on well maintained permanent way (rails, sleepers, ballast and formation).

The Deputy Transport Minister, Jeremy Cronin is on record as saying that South Africa must work within Cape rail-gauge constraints and it should not be viewed as “this backward thing we have to be ashamed of” (Engineering News 29th July 2011).

Elsewhere in the world, notably in Japan (its conventional lines), Indonesia, New Zealand Queensland and Western Australia, the 3 foot 6 inch is still a valid option. Queensland Railways in particular have upgraded their passenger service along the coastal main line between Brisbane and Cairns (1 680 km) with the new “Spirit of Queensland” service comprising seven coaches with a diesel power unit at each end (push and pull), which has the latest Tilt Train technology allowing a speed of 160 kph (100 mph) on certain stretches of line. This goes to show that the Cape gauge can be developed further still without incurring the prohibitive costs that would accrue from a change of gauge.

It may be trendy to have a Standard Gauge railway but in truth much can be achieved on the narrower 3 foot 6 inch, it is only because the majority of the world railway route mileage is on the Standard Gauge (in North America and Europe) that makers of railway rolling stock and equipment pander to that market with off the shelf products; the “Gautrain” four-car set, that plies to the Airport from Sandton is after all only a British Electrostar with a false nose.