Looking back at the Woolff Restoration of the Donkin Row Houses 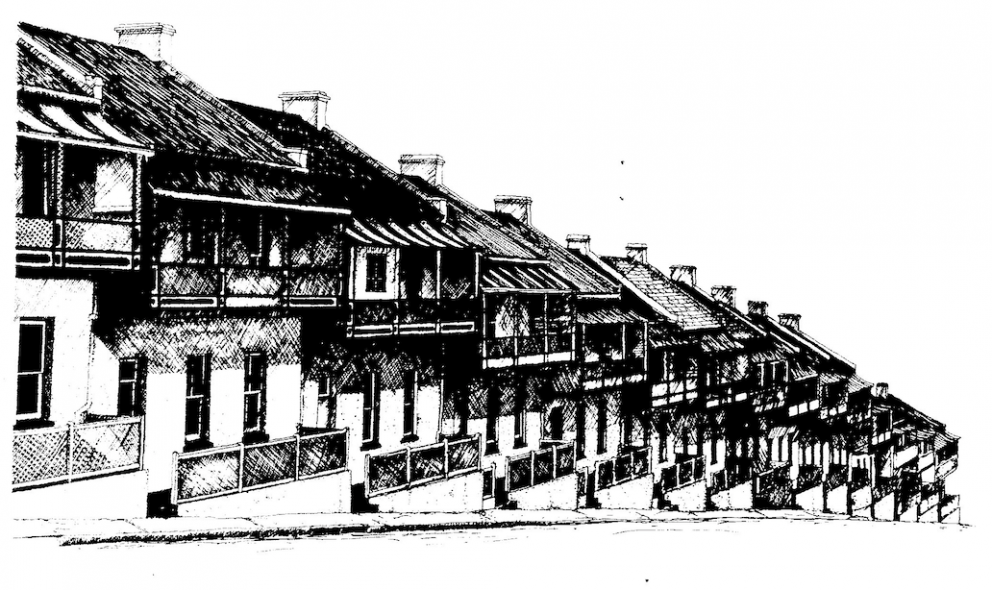 In the late 1980s Dr Nic Woolff compiled the article 'Lessons Learned from Restoring the Donkin Row Houses'. It was published in Restorica, the journal of the Simon van der Stel Foundation (today the Heritage Association of South Africa). If sentiment on the ground at the moment is anything to go on, the current developer has not learned any lessons and therefore this piece might make depressing reading for members of the heritage community. Thank you to the University of Pretoria (copyright holders) for giving us permission to publish the article.

The Group of Row Houses in Donkin Street is a very important and beautiful architectural feature of Port Elizabeth. As one of only a few remaining examples in this genre they are today much more valuable than when they were built originally. After meticulously restoring them, the author - a medical doctor by profession - was awarded the main prize (jointly) in the Herald Architecture Awards for 1988. In this article he describes the principles behind the policy he adopted for the restoration of these houses. 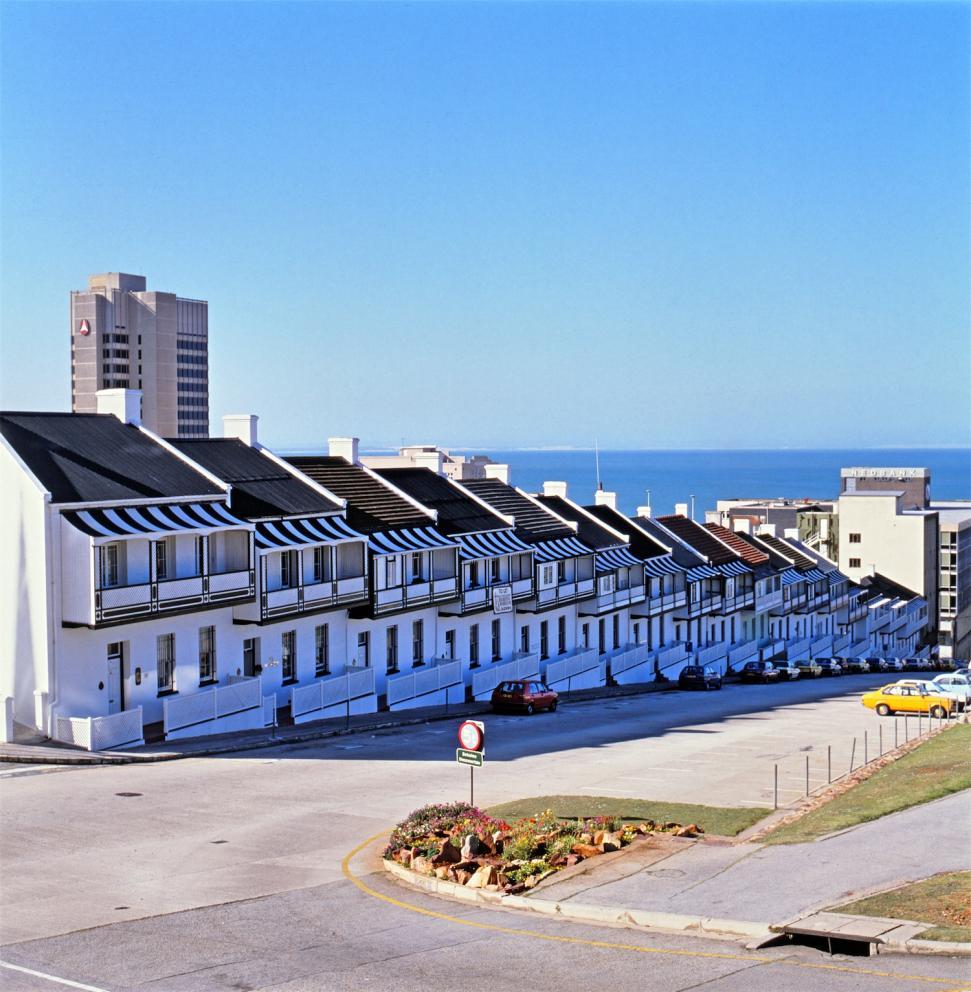 I am convinced from my experience in Donkin Street that no outstanding abilities are required for restoration. What is needed is time, interest and application. And this should not be surprising when one considers that those who originally designed and built the houses were, in fact, ordinary citizens. They worked from their memory of how houses were constructed in England and struggled with what meagre materials and labour were available here. And if they could erect these buildings in such adverse circumstances, it should surely not be an unsurmountable task to us to restore them. Nothing is beyond human scale. There are no specialised techniques - just basic methods and basic materials.

There should be no needless overestimation of the merit of the terrace. The houses are typical 19th century structures without any particular feature or quality. What has made them worthy of note today is:

They exist as an intact terrace in good condition where most other contemporary groups have been demolished or are in disrepair.

They face onto a large and well-placed open space near the centre of Port Elizabeth, where considerable number of citizens and visitors pass every day.

They have been furnished with either period or compatible furniture, so the restored tone of the house is continued within as well as without.

The Colonial Government of the Cape sold singly the 17 plots on which the Donkin Terrace is now built. Then between approximately 1855 and 1880 the houses were erected, starting from the bottom and proceeding more or less in sequence, to the top. One of those plots where building did not immediately take place, or on which small temporary structures were placed, the neighbors enwooded beyond their boundaries, with the result that these houses finally built on these plots were sounder than the rest. In fact, all the houses are slightly different. The task of restoration has to make then appear largely the same at least at first glance.

There was no conception, when my parents bought their first house in Donkin Street over 20 years ago, that most of the others would eventually come into our possession. The purpose, then as now, was to enjoy, improve and preserve. Later, as others became available in the open market over the years, we purchased them and brought them into condition. Only in the latter years have we been concerned to acquire all that became available lest, should they fall into other hands, the new owners would have their own and different ideas and thus break the established appearance of the row. 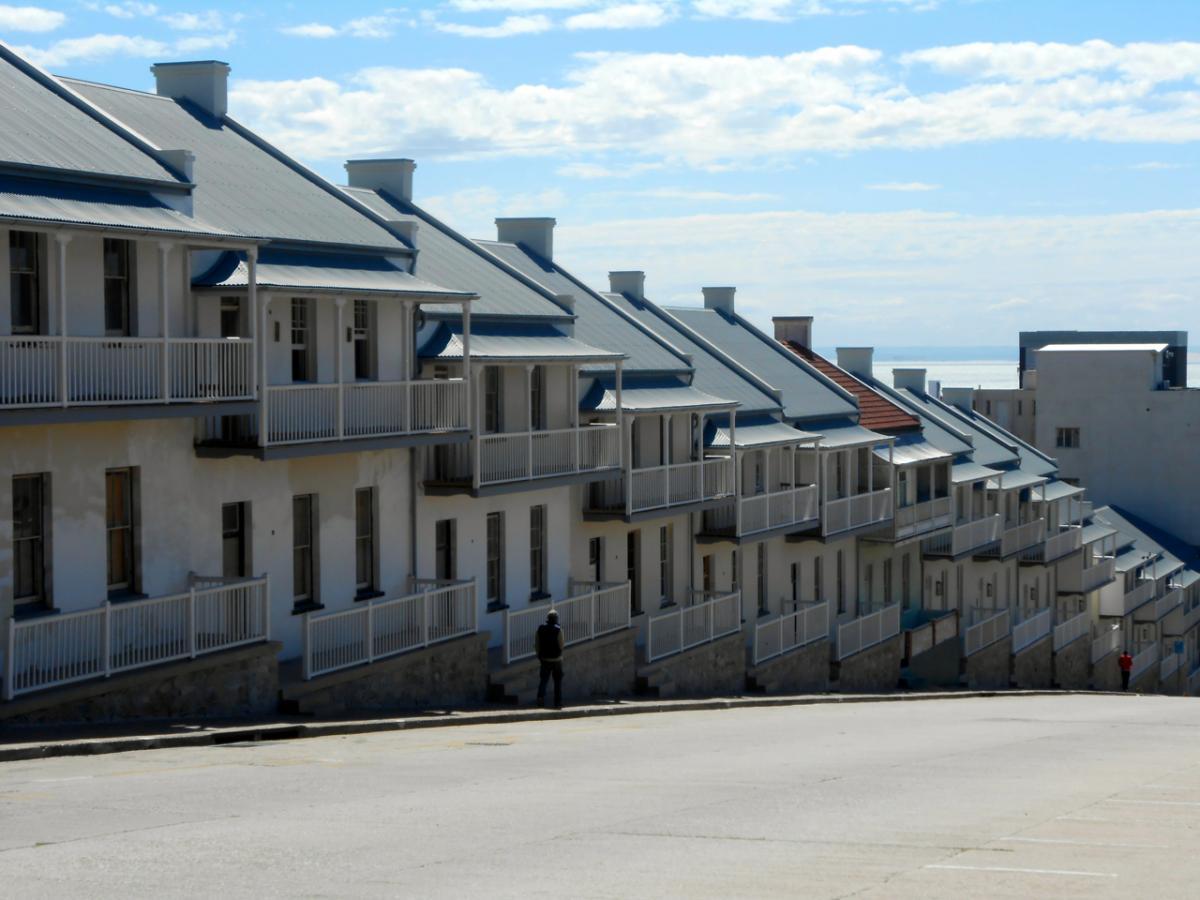 The first stage of acquiring a new house is to make it safe and livable. That is to renew the wiring, fix the roof, and modernise the plumbing. Then follows the replastering, inside and out, plus wood repairs and repainting. Next is removing the added facades and replacing it with original designed wooden balconies. Lastly is the furnishing - a stage which is never fully done. Pieces are added, others taken away as the collection improves and grows.

Of all these tasks, certainly the most difficult and challenging - especially for an owner builder - has been the replacement of the facades. As anyone who has known Donkin Street from before will tell you, the houses were a jumble of different and untidy frontages. As the original wooden balconies perished in the weather, so they were replaced, at various times, with an array of bricked and concrete structures that obscured the essential uniformity of the row.

Clearly these abominations had to go, but to remove them was daunting for a number of reasons. Firstly, the houses infringed directly on a busy street - with both pedestrian and motor traffic passing right in front.

Secondly, the facades were relatively new and in good condition and strongly resisted being brought down.   It was a case of taking off the good and leaving the bad - which seemed illogical even today if it wasn't for historical correctness.

Thirdly, with the facades being strong and the houses themselves weak (soft bricks with lime grouting) the balconies had to be separated with clinical precision. 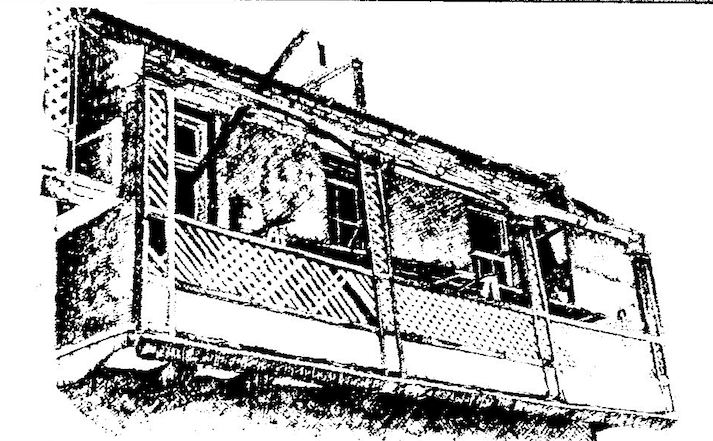 The bonds by which they were attached to the houses had to be severed with such neatness and controlled force that the house itself would be undamaged and the balconies drop directly downwards. The concrete had to be studied for its structural weaknesses, and these points undermined so that the whole would drop under its own weight rather than by external force.

No demolisher's ball could be used, nor any careless demolishing staff. The demolishing was done - bit by bit - over weekends and with the street closed, by the same restoration team that would have to attach the new wooden facades and who therefore had an interest in damaging as little as possible. An unfortunate but inevitable consequence was that the stoeps were dented by the concrete falling from a height, and had themselves to be demolished and rebuilt from scratch. For the new wooden balconies to fit in proper alignment, both stoeps and the fronts of the houses had to be exactly true. As the houses were never in perfect alignment at any stage in their existence, this meant working to a degree of precision and adaption as allowed no error.

A further area of meticulous attention was the construction of the new balconies themselves. Wood had to be found and selected that would not yield and warp. That wood had then to be worked and treated to meet and maintain these tolerances. Then the wood - cut to meet the original design - had to be installed without strain and with equal precision to last in position for the next 100 years.

All this is demanding but none is difficult. Certainly all is within the capabilities of the competent house owner. Since most of the larger and historically important buildings have already been secured, it follows that the most promising future area of preservation is that of the smaller and much humbler, privately owned houses. I hope that my work at Donkin Street and this article will be an encouragement in this direction.