Embellishing an icon - Artists and the Union Buildings 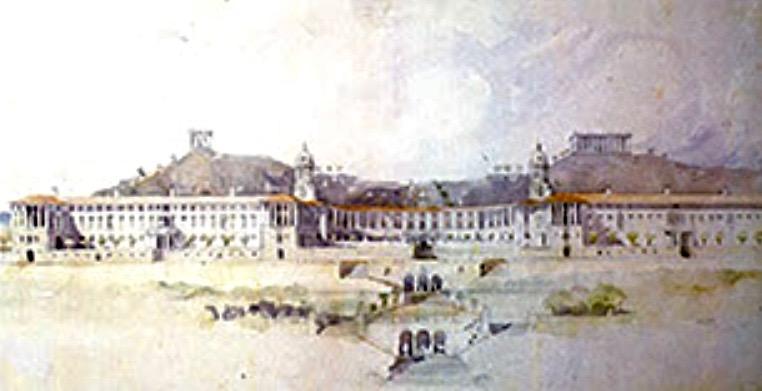 The following is an extract from a paper by Art Historian Professor Alexander Duffey in which he explores the many artists who contributed in one way or another to establish the Union Buildings as an important icon, not only of Pretoria, but also South Africa. These artists can be grouped into two distinct categories: those who contributed directly to the embellishment of the buildings and their surroundings and those who made representations of the buildings and their surroundings.

A large number of artists produced paintings, etchings and drawings of the impressive Union Buildings and through their work helped to make these buildings known worldwide and establish them as one of South Africa’s important architectural icons. The earliest known representation of the buildings are a number of watercolour perspective paintings by the architect, Herbert Baker, dating from June 1909. The most impressive is the water colour painting present in MuseumAfrica, which was also used in etch-form for the cover of the commemorative programme for the laying of the cornerstone by the Duke of Connaught on 26 November 1910. 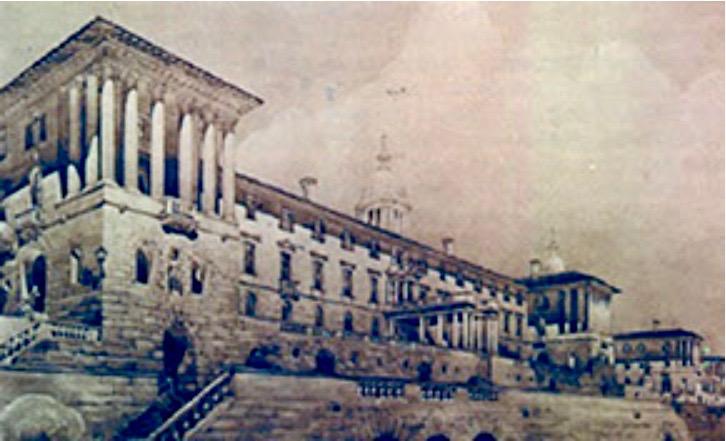 Watercolour of the Union Buildings by Herbert Baker

Cover of the Union Buildings Commemorative Programme - Sourced by the Arcadian.png 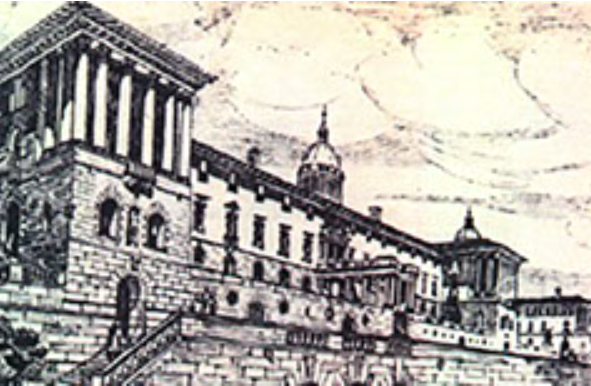 Cover of the commemorative programme

The well-known South African painter, Jacob Hendrik Pierneef (1886-1957) had a very long association with the kopje known as Meintjieskop, on which the Union Buildings were built. It always occupied a very prominent position in his oeuvre. In the more than 70 known artworks depicting Meintjieskop and the construction of the Union Buildings there, which he made between 1905 and 1948, he seems to reject the placement of these buildings on the well-known hill. He considered Meintjieskop as an important landmark of the old Republican Pretoria and regularly featured it as subject matter in his paintings. He did not support the Imperialist ideas of Botha and Smuts at that time and rejected the idea of erecting such buildings in Pretoria.

During 1912 and 1913 Pierneef was very active with making drawings and paintings of the Union Buildings in progress. In total about 20 of these paintings have survived. The earliest painting is a crayon and pencil drawing. It shows the Union Buildings from a low angle with the emphasis on a sun-lit worker’s hut on the right. In the foreground a worker loads a trolley and in the background behind the hut the gantries tower above the Union Buildings in progress. With this work it seems Pierneef wanted to emphasise the chaos on the building site and the way the natural environment was being spoilt by the construction.

Pierneefs earliest drawing of the construction of the Union Buildings 1912 - sourced by the Arcadian.png 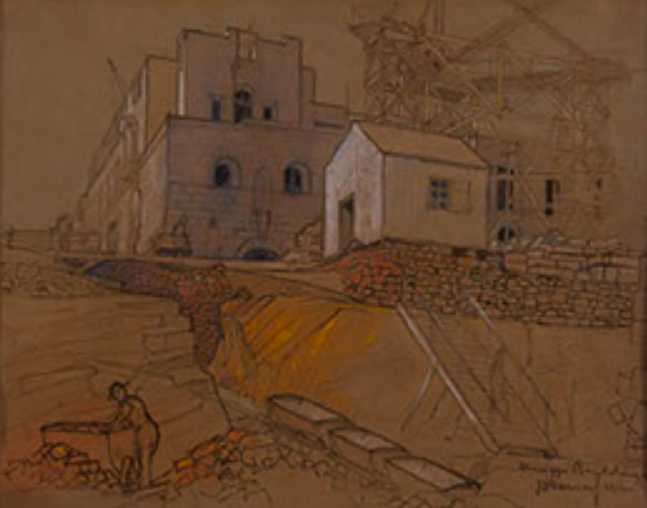 Pierneef's earliest drawing of the construction of the Union Buildings

Pierneef’s documentation of the Union Buildings stressed all aspects of the disappearance of the old. In his numerous drawings he shows that Meintjieskop, as the people of Pretoria knew it, was going to be changed forever and with it was to come a new era of mechanization. A crayon drawing dated about the middle of 1912, shows the three large steam driven cranes used in the construction of the Union Buildings. The main emphasis is on the chaotic stacks of Portland stone, floor tiles, heaps of sand and the polluting steam crane on the right. 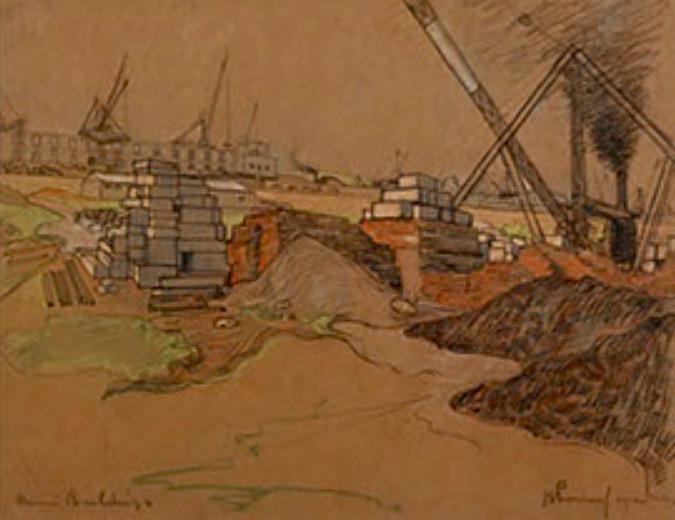 In the period from 1913 to 1948 Pierneef continually returned to represent Meintjieskop and the Union Buildings in one way or another and there are at least 29 artworks from this period. A rather contraversial painting in the Pretoria Art Museum, entitled Apiesrivier, Pretoria met Meintjieskop agter was created in 1948 and shows the winding Apies River running in a gully from the foreground to Meintjieskop in the background. The work, painted in the year the Nationalist Government came to power, shows Meintjieskop as it looked prior to 1910, without the politically unacceptable Union Buildings on it. 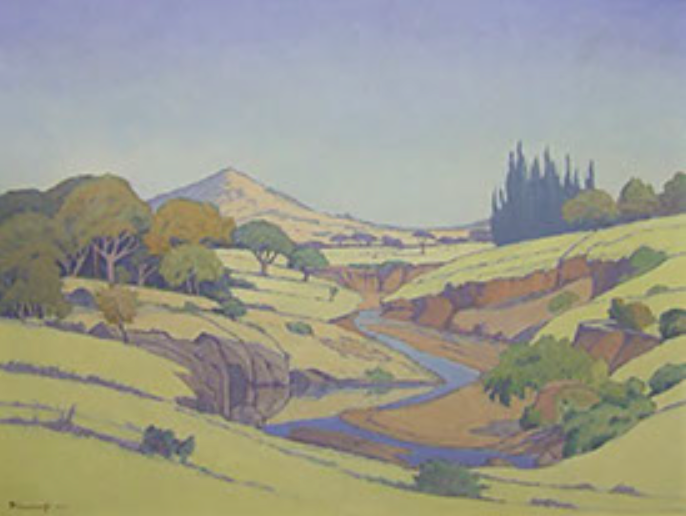 When Erich Meyer came to Pretoria in 1911, Pierneef accompanied him on painting trips to Meintjieskop, where the Union Building were under construction, and there Meyer completed a number of paintings.

Union Buildings under construction 1913 - Meyer - sourced by the Arcadian.jpg 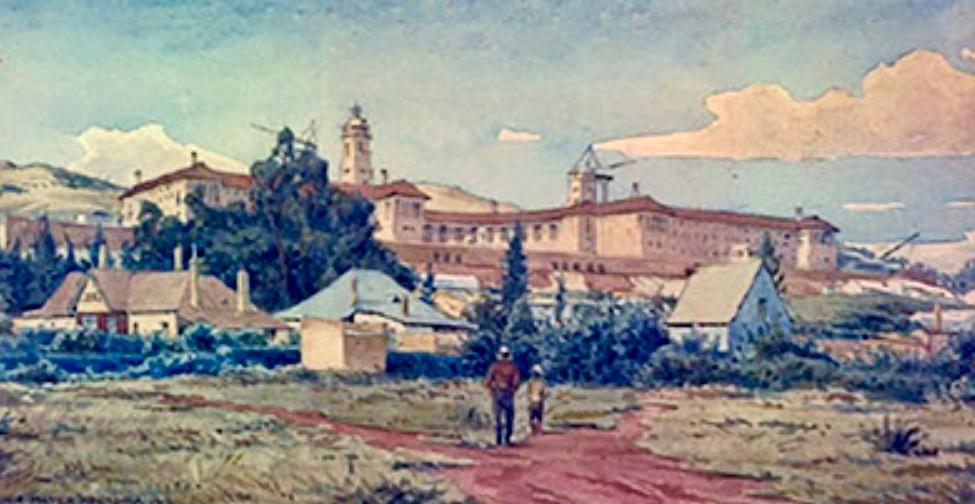 By the 1920’s the Union Buildings had become a popular theme in paintings of Pretoria and views of these buildings were produced by artists such as S.F Naude, Thomas Leighton, H.M. Pemberton, David Canty, Sydney Carter, Johan Marais and Willem Goosen. 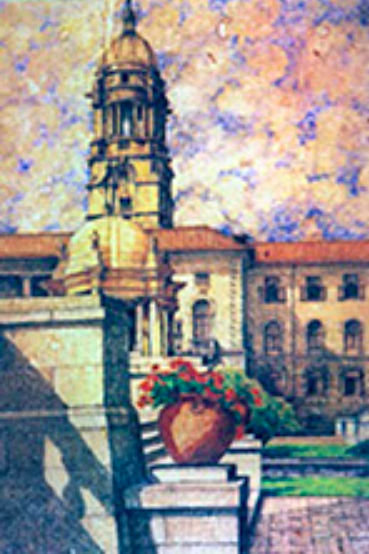 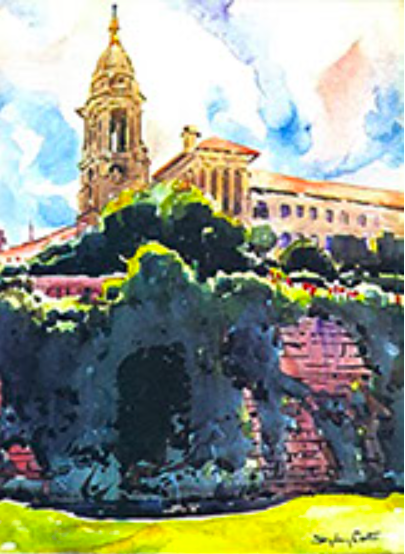 In later years many artists painted views of Pretoria and invariably used scenes showing the Union Buildings to identify their cityscapes. A very good example is the 1959 painting Street Scene, Marabastad by the Durban artist, Geoffrey Charlesworth. 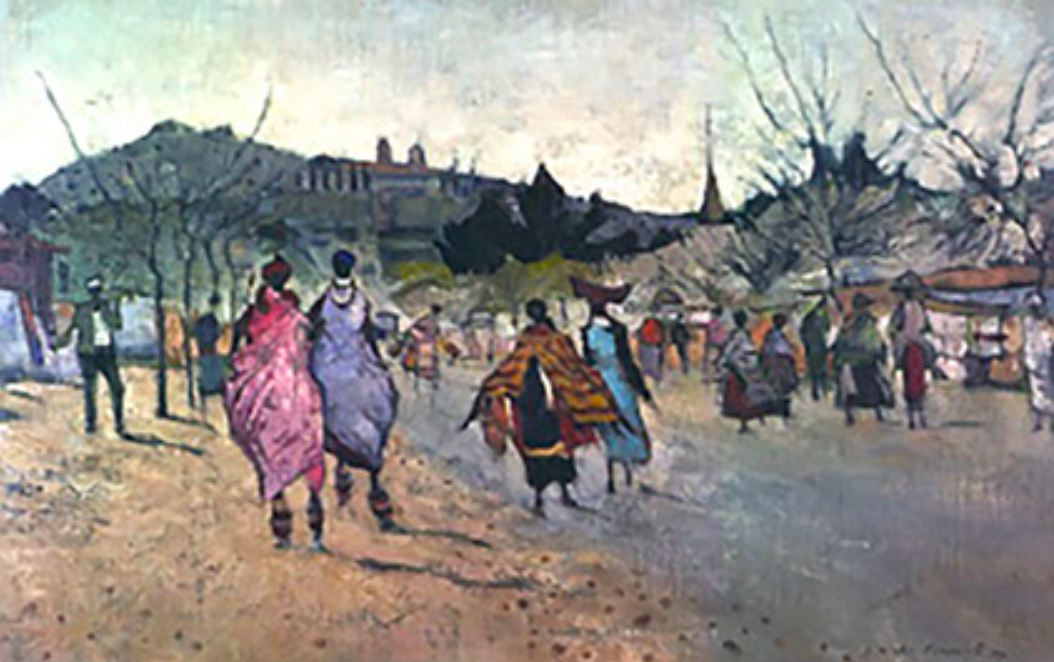 Right from the start, the Union Buildings were destined to become an icon of Pretoria and South Africa, not only because of their impressive significance as the seat of government in the north, but also because of the architect’s attention to craftmanship and detail, his free borrowing of architectoral styles, his request to use local materials and his gift to extract all that is symbolically significant and synthesize it into an impressive unit of exceptional monumental grandeur.Those artists who over the years directly contributed to the embellishment of the Union Buildings, as well as the many who later created artworks of these magnificent buildings, all helped to confirm and cement their iconoc status for generations to come.

This article first appeared in the June 2021 edition of The Arcadian. Click here to access the original story. A complete version of this paper is available for perusal on the ARRA website: www.arra.co.za.