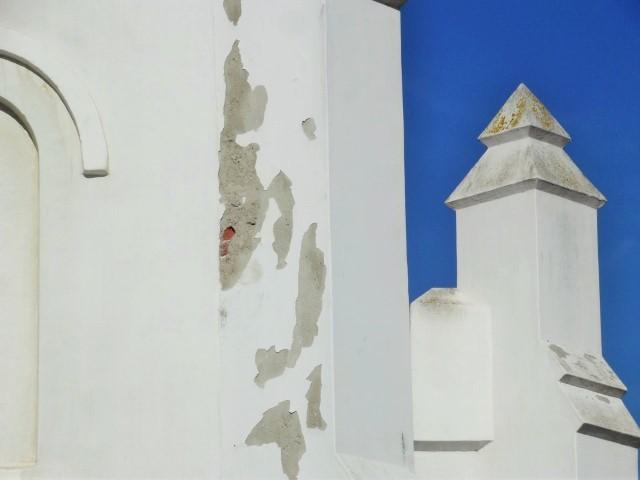 [Originally published in 2014] The restoration had proceeded reasonably to a conclusion in November 2004 ready for handover from the contractor to the Department of Public Works (DPW) and the Robben Island Museum (RIM). In July the tower and particularly the NE buttress had been partially stripped to the brick, re-plastered and painted. Six months later in early January 2005 the then Heritage Manager for Robben Island reported to SAHRA that the paint had started to blister in places on the tower. By February 2005 the paint had started peeling. Small spots of plaster had also peeled. The architect, contractor and RIM met on site in February of 2005 to determine the extent of the deterioration and its potential cause. A paint specialist was also to hand. 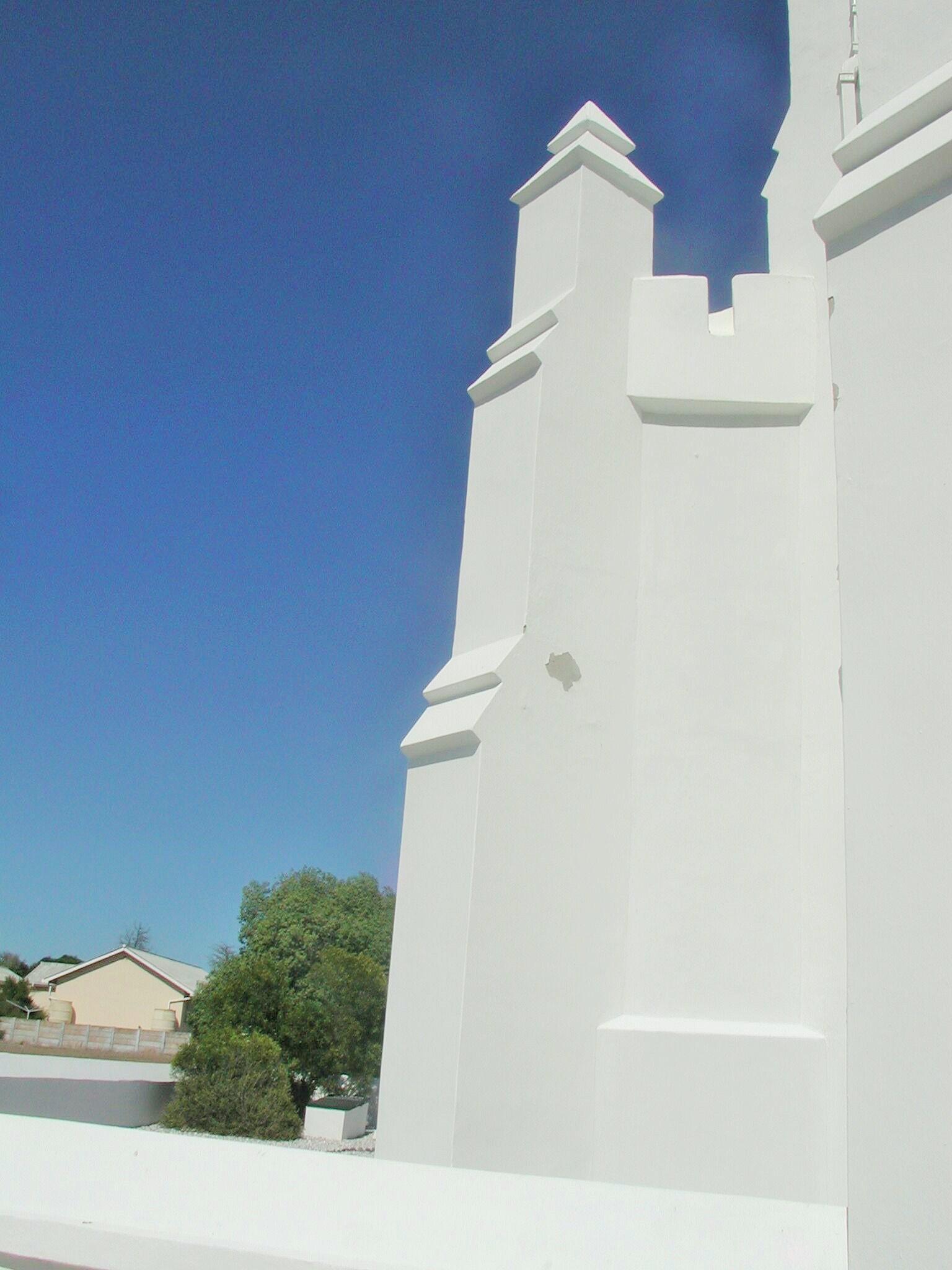 The paint had started to blister in places

The RIM Acting Heritage Manager reported that on their arrival they had started collecting paint and plaster samples for analysis. The samples were to be sent to the CSIR centre at the University of Stellenbosch. The results would be sent to the contractor who would forward these to DPW. The RIM Manager specifically requested a ‘Method Statement’ from the contractor outlining how and when the problem would be dealt with. In January of 2011 when RIM was again preparing for a World Heritage Committee representative on a monitoring visit the results of these tests and the ‘Method Statement’ could not be located. It is doubtful if any of this was ever done.

The RIM Manager concluded that whatever the outcome of the tests that further substantial work would be required to fix the deterioration. The standard three month period in which a 10% retention fee was still payable to the contractor had not expired. The contractor was therefore under an obligation if they wanted the rest of their money.

The RIM Manager then concluded the problem raised by the quality of water used by the contractor had implications for future construction projects. It had transpired from the meeting that the paint specialist had concluded on site that the possible cause was a high salt content in the plaster used. A little further investigation showed that the contractor had used sea water instead of clean water for the plaster.

Robben Island is unique in South Africa in that they purify seawater in a reverse osmosis process to supply fresh water to the Island. It transpired that the plant was not operational and undergoing repairs. The contractor was supposed to have shipped water from the mainland but opted to take a short cut with dire results.

I had two grandfathers who had a large knowledge of building and construction. Splatter plaster was mixed in a 3 to 1 with a quarter quantity of salt. You then had to water the plaster after application for some days afterwards to set or it would peel badly. But this mixture was only applied on a hard substrate. I am not a chemist but from observation there is some sort of reaction between salt and Portland cement. The salty mix on the Church was destined for disaster.

January 2011 RIM had cash in and wanted to facelift the obvious visible parts of the main street before the proposed visit by World Heritage in February. It was, however, obvious that this was not going to work for the Church because despite the retention fee the contractor never returned to do the remedial work. The plaster and paint had also deteriorated considerably. RIM was concerned about the negative report the World Heritage representatives might put out if nothing was done. 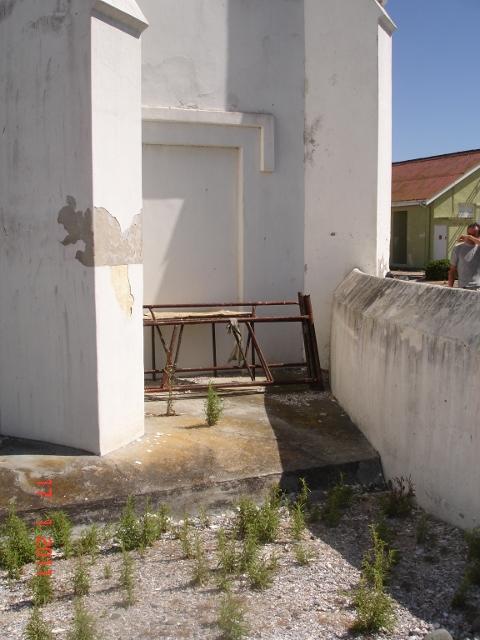 The plaster and paint had also deteriorated considerably

Our suggestion was that the problem should be investigated and that this was the line they should take. Until the investigation and research had reached its conclusion no work would be done on the Church. A number of recommendations were made to RIM including ongoing physical and photographic monitoring, as well as periodically to follow the dry and wet seasons over a year test the moisture content of all the walls inside and out.

The snippet of information about the height and extent of damp up to the cills reported by the restoration architect raised questions. Paint and plaster on the interior had also deteriorated in places not adjacent to the exterior deterioration. Some of this was due to another problem but I leave this for next time.

Needless to say none of the recommendations were followed. No research into the problem! The church was left to stand and with my next visit in March and May of 2013 the tower and NE buttress had deteriorated even further. The deterioration had now spread to below the area of the replaced cannon. Paint and plaster peeling was considerable. This I highlighted in a seminar presented in May at which RIM Management was present. 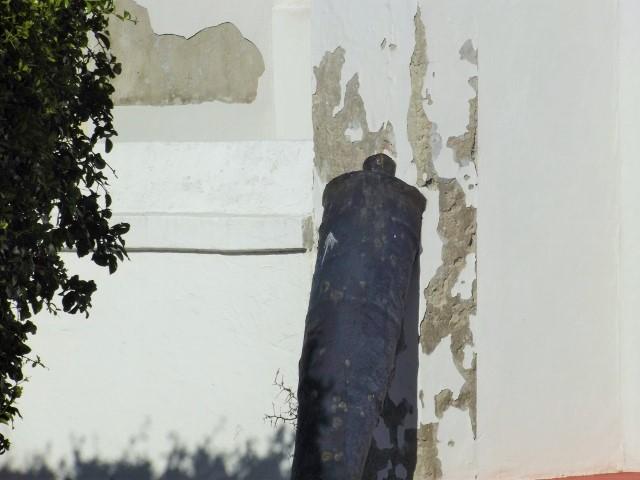 Paint and plaster peeling was considerable

A decade later and the problem has as yet not been addressed. The architect and contractor appear, in my opinion, to have absolved themselves of responsibility. Neither RIM, SAHRA nor DPW appear to have taken the matter further on an Iconic World Heritage Site. The Church itself is in the tourist gaze.

To be continued...Poor maintenance aggravates the problem.