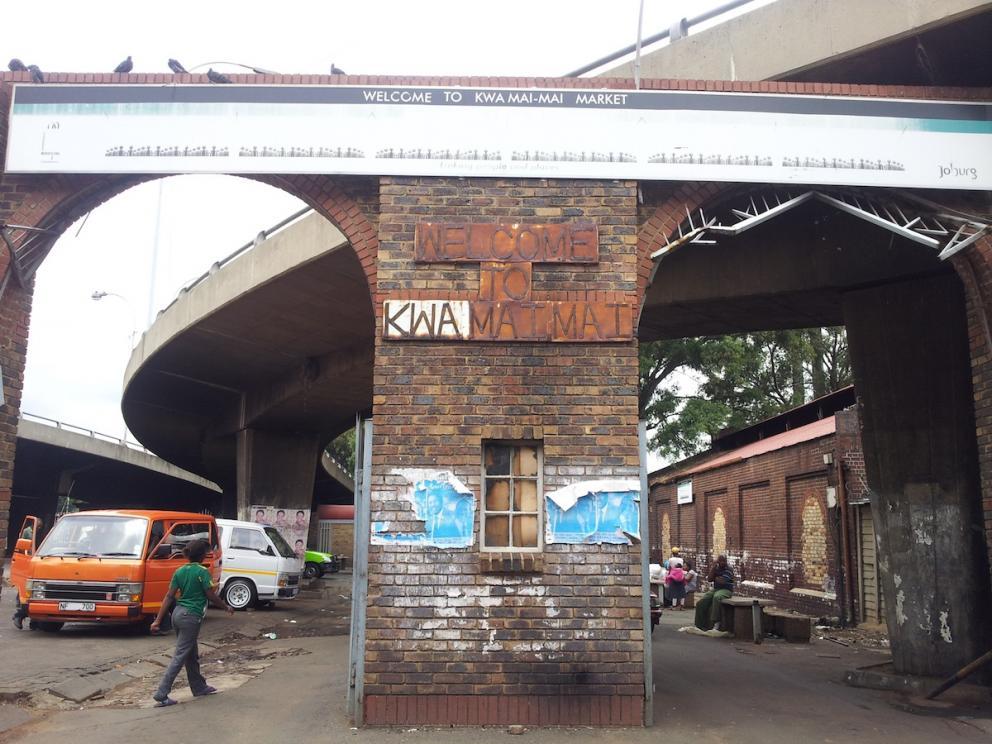 The Mai Mai Market is one of the oldest markets in Johannesburg. Many sources describe it as 'the Place of Healers' (Ezinyangeni). People from across Gauteng flock there in search of cures for a myriad of ailments. The market is located to the east of the city on the corner of Anderson and Berea Streets and has been through many periods of neglect and revitalisation. There appears to be a relatively settled community and thriving trade for those lucky enough to run a business at Mai Mai.

In the lead up to Johannesburg's centenary celebrations the market was selected as one of the top 100 places worthy of preservation. WJP Carr a member of the Johannesburg Historical Society (now part of the Egoli Heritage Foundation) and for many years the Manager of the City Council's 'Non-European' Affairs Department (NEAD) compiled the following overview in 1985.

The original Mai Mai Bazaar was located on the grounds of the old Salisbury and Jubilee Compound, at the corner of Wemmer, Jubilee Road and von Weilligh Street on the East, and Kruis Street Extn on the West. The Salibury and Jubilee Gold Mine closed down before the First World War and the compound was taken over by the City Council round about 1919/20 and used for the accommodation of black men casually employed in Johannesburg. This class of worker was known as a ‘Daily Labourer’ and they carried a special pass which had to be renewed every month; since they had no fixed employer the pass had to be signed by the Council official in charge of the compound.

The place got its name ‘Mai Mai’ from the habit of an early mine manager, a compassionate man, who always said “Mai Mai” whenever a mine worker who had been injured underground was brought to the surface. The Mai-Mai provided for an interesting variety of self employed workers, such as skin workers, bangle makers, carpenters, snuff makers, sjambok makers and a number of well known herbalists, whose small shops were a veritable cornucopia of remedies such as herbs, animal extracts, snake skins and dried snake venom. The skin workers and the bangle workers manufactured the regalia used by the mine Dance Teams and would set out from time to time, laden with goods they had made and travel along the Reef from one Mine Compound to another, selling their wares.

At that time mine workers whose contract had expired would not dream of going home without a wooden kist or box about 2 feet by 18 inches, by 18, lavishly ornamented with inset mirrors on the lid and/or sides and with an African artistic motif worked into the surface of the wood; often this was burnt in, or in the form of a crude ‘wood cut’. The snuff makers, all of whom are inveterate smokers ‘imported’ a wide variety of very crude and harsh tobacco from the Transkein area and, mixed with aloes and other vegetable matter, was then sun dried and pounded into fine powder in a large mortar and pestle.

Another popular trade was that of sandal makers. This was in the hands of the Zulus, who used cut up motor tyres for the base of the sandal, which was secured to the foot by straps or thongs. The bangle makers were very skilled and produced intricate designs, which were also applied to the manufacture of beautiful ornamental ‘dancing sticks’ and purses. With the passage of time the Salisbury and Jubilee Compound fell into disrepair and after a bad fire in the 40s, the Council decided to move the whole place to a new site in City and Suburban off Greene Street and Berea Street, where it still is but it has retained the old name of Mai Mai.

Both in the original compound and in the new Mai Mai, a limited amount of residential accommodation could be rented by the traders. The place has always exercised a strong fascination for tourists.

This site is also of importance because it is very close to the spot of the Natal Camp (first called Meyers Camp) where the diggers from Natal pitched their tents on the banks of the Natal Spruit (now canalized).