The Balcony Building (numbers 58-62 Main Road) is today mainly associated with The Factory Shop, which was opened in this building in 1983 and has expanded over the years to occupy most of the building. It was owned by a Swiss national, Jörg Friedrich, who managed it until 2013. The present owner, Fransien Koegelenberg took over at that time and has expanded the business further.  Fransien was kind enough to show me the interior of the building. 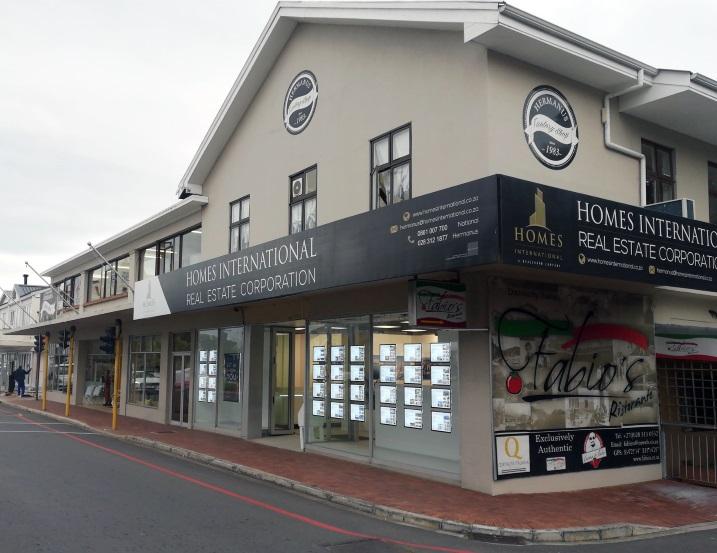 At present a real estate corporation named Homes International Real Estate Corporation is on the corner of Main Road and St. Peter’s Lane. Fabio’s Restaurant is around that corner and faces onto the Lane, but, structurally it is part of the Balcony Building. Previously, a leather goods shop called Hakbak Leather rented the premises. It was followed by two restaurants in succession before the present restaurant opened for business

For nearly sixty years, Alex Grant: Pharmacy occupied one shop on the ground floor. The shops on either side changed over time. An image from about 1925 shows three of these shops. On the right of the pharmacy as one faced it was a business called Anglo Parisian. It advertised itself as selling French model gowns and novelties. So far I have been unable to find out more details of it. Much later this area housed a branch of Foschini, and more recently of Total Sports. 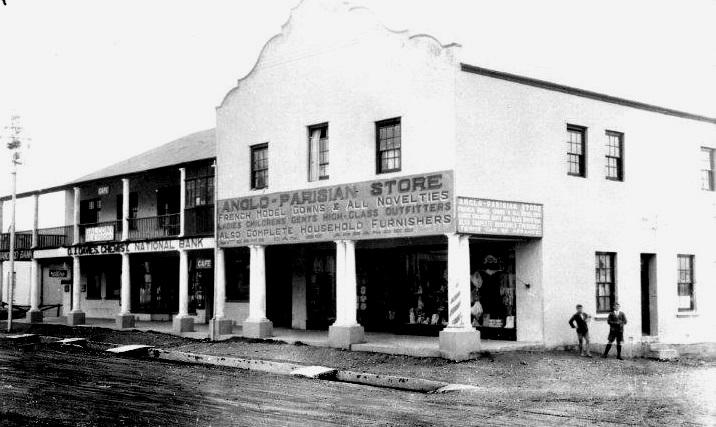 Image of the Balcony Building from 1925 (Old Harbour Trust)

To the left of the pharmacy on the 1925 photograph you can make out the name of a branch of a bank which has the word “National” in its name. This was almost certainly a branch of the then largest bank in the country, the National Bank of South Africa Ltd. Established in the Eastern Province in 1838, this bank later merged with others to form Barclays Bank. Later still, it became FNB and now has much larger premises on Market Square, across the road from its original branch.

The Balcony Building was constructed in the early 1900s, perhaps as early as 1906. The work was done by Robert Walter MacFarlane (1874-1955), son of one of the original settlers, who was also named Walter MacFarlane. Several of the men in the family were named Walter, so Robert Walter was generally known as Wattie. He constructed the Ocean View Hotel at about the same time as the Balcony Building.  Wattie served as Mayor of Hermanus from 1923-1926.

The Balcony Building was almost certainly the largest commercial building in Hermanus at the time it was built, and was well-situated, at the junction of the two most important streets in Hermanus, and adjacent to the Anglican Church.  It was also diagonally opposite the Victoria Hotel which belonged to Walter MacFarlane, Senior.

However, there are no records of ownership and tenants until the 1920s. By that time, the most notable feature of the building was a roller-skating rink. I assumed that this could only have been on the ground floor, as the weight of dozens of skaters and the noise created would have been dangerous and disturbing for any business beneath it.

However, there is oral evidence that the rink was on the first floor. Peter van Dyk told S J du Toit that in the 1950s “We loved the Balcony Tearoom where we could sit on the balcony and see the street panorama below. This was the place the young people congregated, chatting and listening to the juke box. On the right side in the big hall was a roller-skating rink, later converted into offices”.  This seems to suggest that the tearoom and rink were on the first floor.

Peter van Dyk confirms the existence of the hall in the Balcony Building: “The Balcony was the main hall in the village. The BESL (British Empire Service League) held their annual Christmas function in the roller-skating hall. The Grobbelaar Hall was not yet built…”

Another regular user of the hall was the annual ‘wild flower show’. Long-standing Hermanus resident Nancy Okes recalls the event in the 1920s:

…the flower show was held in the great room above Sandy Grant’s chemist shop…three long sets of trestle tables, covered with starched white cloths stretched down the room. On these were vases and pots and bowls of fynbos… Onlookers spoke in hushed tones. The scent was overwhelming… When in later years I read about the ‘upper room ‘my mind always returned to the flower show. Jesus administered to his disciples in a fine aroma of fynbos and before Him stretched long white covered tables…

On the ground floor, fronting onto Harbour Road in the early 1920s, was I. Davies Pharmacy, the first pharmacy in Hermanus. It was a branch of the same business in Caledon.

Alexander Grant worked for Mr Idris Davies from 1928 to 1931, before he was able to acquire the business and change the name to Alex. Grant Pharmacy.

Sandy Grant (as he was always known) retained control of the pharmacy until he sold it to Dennis Rigg in the 1980s. Dennis had previously worked for Sandy as a pharmacy assistant.

This branch of the National Bank is one of the businesses that has left physical evidence of its operation, in this case, the walk-in safe. The door of the safe is still in fine working condition and revealed some interesting information. The manufacturer of the safe was a firm in London by the name of John Tann. The firm was the oldest safe maker in England, having been established by Edward Tann in 1790. They boast multiple awards and 'by appointments' and were considered the best safe makers in the world. Someone has written a date on the door: 1938. This was probably when the safe was installed. Obviously no expense was spared by the bank, even in a small branch such as Hermanus.

There is no clear detail of all the other businesses in the Balcony Building over the decades. However, we do know that at one time the firm of Beunderman’s Electrical was next to Alex. Grant Pharmacy, facing on to Main Road, and, on the other side, was a business belonging to the Nigrini family. The owner was Malita (Bunny) Nigrini and correspondents describe it as a toy shop with a bicycle shop at the rear. Later, a women’s clothing shop known as Leonie’s operated in this spot.

Most of the rest of the first floor was partitioned into a fairly large number of offices.  There are 13 original windows facing onto St. Peter’s Lane and it is reasonable to assume that each ventilated one office. There is clear evidence of a passage along this section so it is reasonable to assume that each office with a window was partnered with an office internal to the building, giving a maximum of 26 offices.

There are three sash windows under the gable, which has itself unfortunately been removed. These windows probably provided ventilation for the Balcony Tea Room.