Rediscovering a Herbert Baker House in the heart of Yeoville 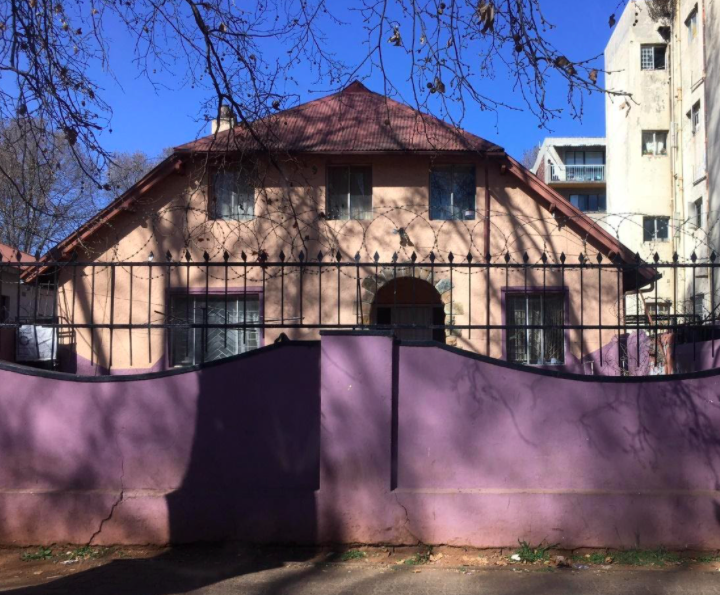 Research into Herbert Baker’s domestic architecture in Johannesburg led me to return to Doreen Greig’s excellent book Herbert Baker in South Africa. Appendix B lists Herbert Baker’s projects and a house in Yeoville at 10 Yeo Street designed in 1910 under the names of Baker and Masey for Mrs G B Given-Wilson is listed. It belongs in the body of work labelled the “Transvaal houses” of Herbert Baker. The house is listed as a Baker and Masey house of 1910 but in fact Baker’s partnership with Francis Masey was dissolved in 1909; Masey went to live in Rhodesia where he ran his own practice but he died fairly young, at the age of 51.

This set me wondering whether a Baker house could still survive in Yeoville. First port of call was to check Google Maps. This is the google view of the house in February 2015. 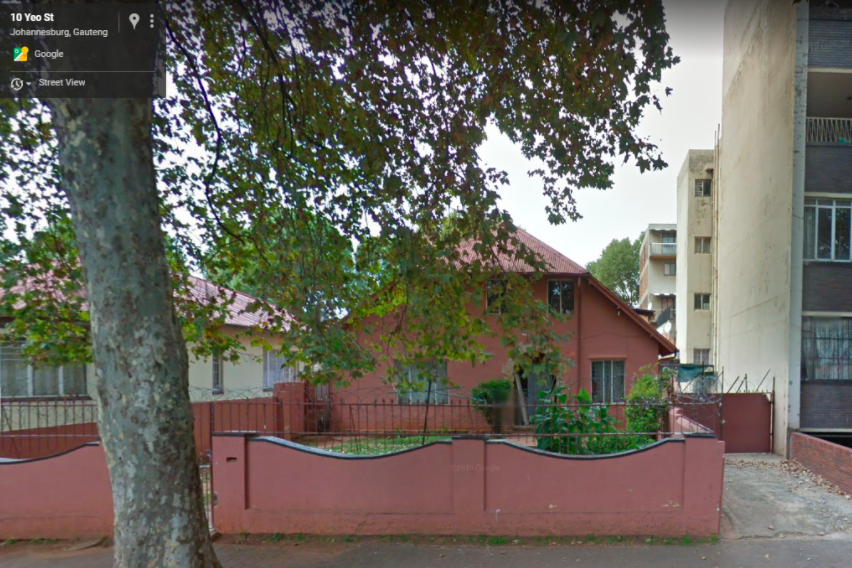 Di Steele of the Johannesburg Heritage Foundation’s Resource Centre brought up an aerial view of Stand No 552 together with the name of the owner, a Thokozile Getrude (sic) Mbobo. The property was zoned for Residential 4 and valued at R691 000.

Excerpt from a property report for 10 Yeo Street Yeoville.png 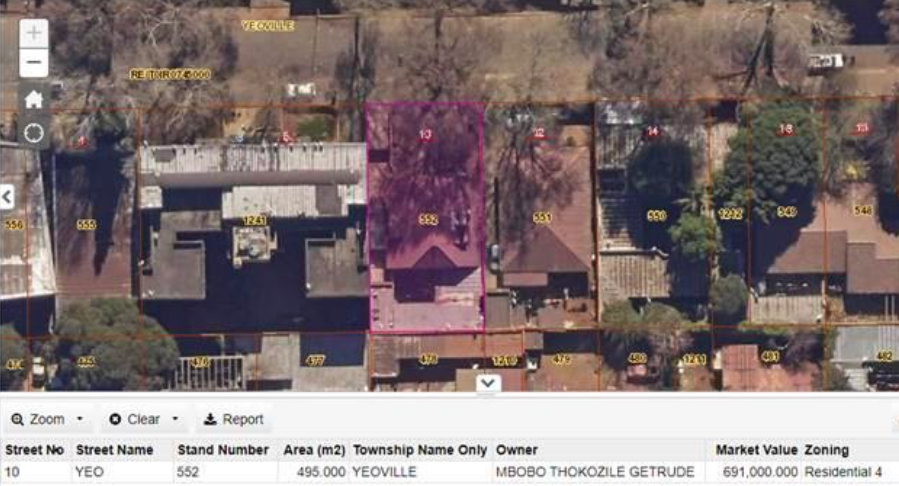 Portion of the property report

The valuation roll for 1913 lists Mrs Given-Wilson as the owner and at that date the valuation of the property was £1100; the valuation roll for 1925 lists a Mrs D B Alexander as owner and the value of the property had risen to  £1640. In 2011 the Parktown and Westcliff Trust Heritage team of Flo Bird and Michael Fleming visited the house and decided on a C heritage grade for this house. In my opinion this heritage house belongs in the line-up of Baker houses and should have heritage protection at Provincial level; as a rare example of a Baker house in a less affluent suburb. I would award at least a B grade to this property. It is one of those strange persistent survivals and is now 111 years old. The roof is perhaps the most interesting feature although Doreen Greig commented on the quality of fittings, door knockers, the handles to windows of the many Baker houses. Specifically in the case of the Given-Wilson house the art nouveau lamps on the stoeps of this house were particularly noteworthy. I doubt that such lamps remain today. 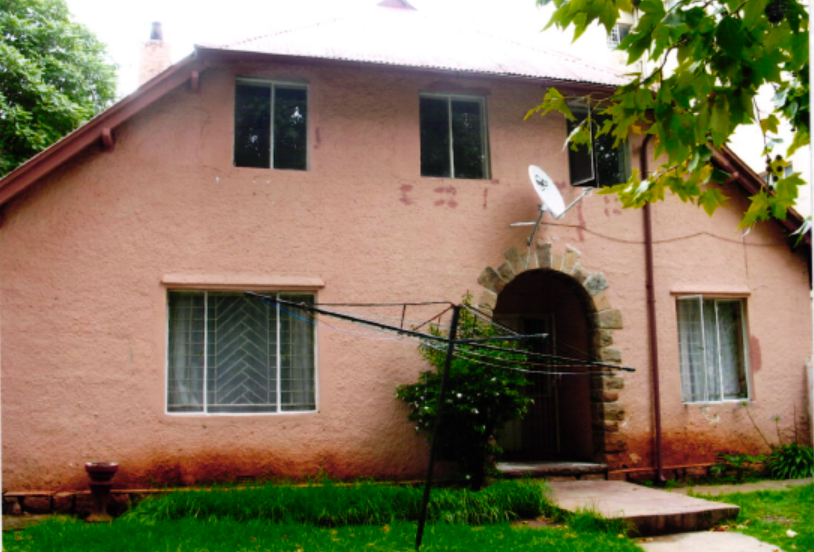 I decided this required further investigation and persuaded my husband to accompany me to Yeoville. The block in Yeo Street where no 10 is located lies between Joe Slovo Drive (formerly Harrow Road) and Grafton Avenue; Yeo Street terminates with a barrier at Joe Slovo Drive. Street names are not visible. To find Yeo Street one counts the streets off an old Holmden’s map (I did it the old fashioned way rather than use  my cell phone to guide me). I was delighted to find that the house is still there. The front wall is not  high - there is a front garden. The house is a double story with a hip roof and the original corrugated iron roof remains. This is a remarkable survival. The colour of the roof and walls is a rust red. Some nice features remain but the place is long since past the glory days of the Given-Wilsons and a friendship with Herbert Baker. In 1909 Mr Given-Wilson sponsored a cricket team that played a match at St Johns College but as yet I know very little about the Given- Wilson family.

When the Given-Wilsons’ lived here, Yeo Street would have been a street of detached  houses, with generous sized gardens; trees on the pavements would have been saplings; outbuildings would have included stables and a carriage house and perhaps later a motor house (a garage for a new fangled automobile), outbuildings and accommodation for staff, perhaps a chicken coop and quite possibly a barn for a cow. Today the house fills the entire stand but in all probability large stands would have been subdivided and land sold off over time. A four storey apartment block is now the neighbour and dwarfs the house. The plane trees are mature and reach beyond the roof line of the apartment block next door. 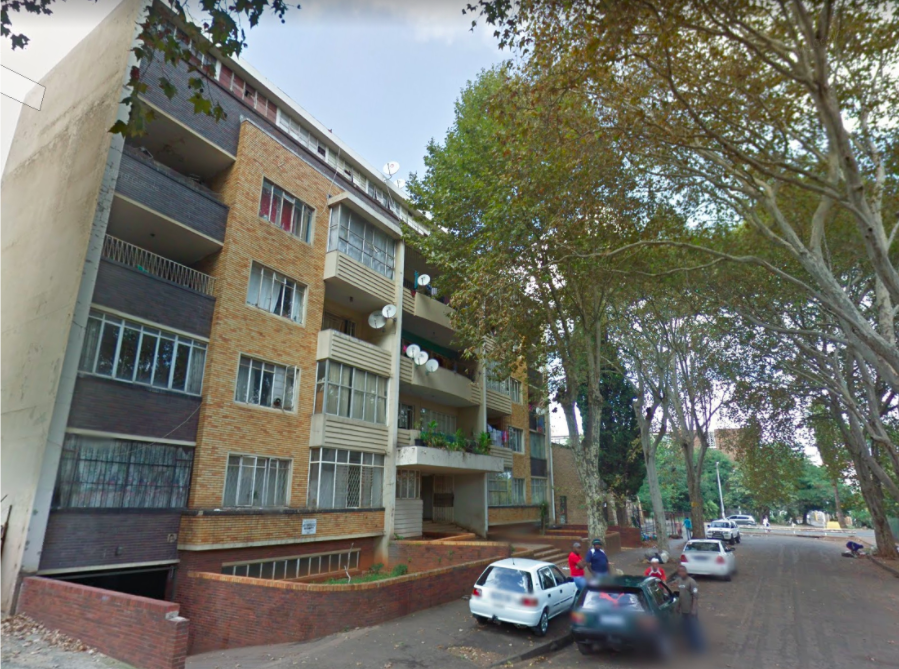 The house needs to be written up and recorded and the intrepid heritage sleuth personality in me took over as I stepped out of the car. I noticed there was an open gate and two people hanging up washing in the garden. My intention was to approach, greet and explain the context and ask if I could take a couple of photographs. Before I could move 3 steps I was accosted by a looming, leering drunken large man with prime muscles and a beer bottle in his hand shouting at me and telling me to be off. He fumed with expletives. I decided silence was the better part of valour. I made a hasty retreat back into the car. My husband did a nifty U turn, foot on accelerator and we sped away. My heart rate shot up as the beer bottle was smashed against the back window. I did not manage to get my perfect photo in fact there were no photos at all. It was an unpleasant and scary encounter; a case of total non-communication; where and how could one begin to explain the incredible built legacy in this cul-de sac.

Sadly Yeoville is in a state of neglect and slow decline. The potholes multiply and water leaks from broken pipes to fill the craters. Many of the suburbs gorgeous buildings are in a state of disrepair.

I shared the disappointment of my misadventure with my heritage colleagues. Flo Bird and her son returned to 10 Yeo Street and I am delighted to share their photos with the heritage community. 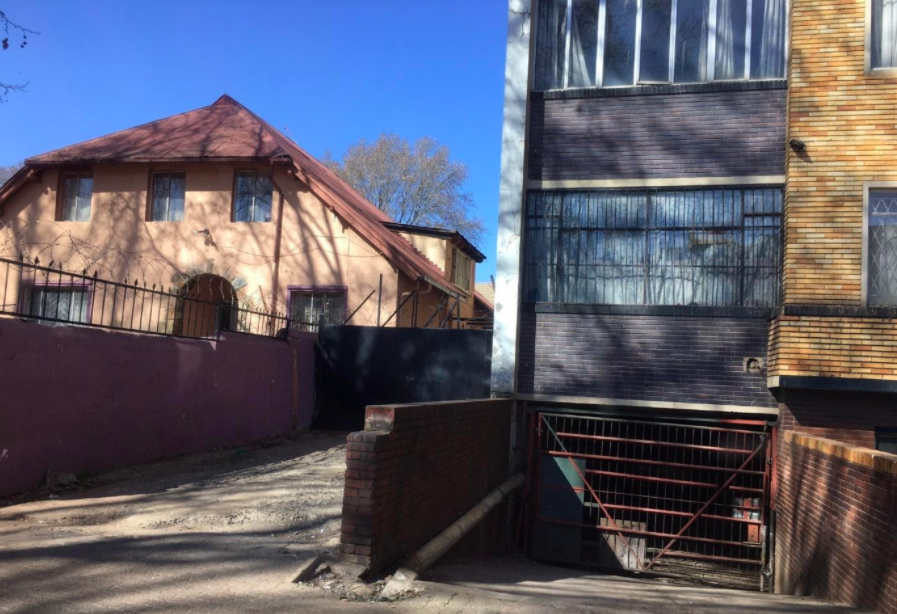 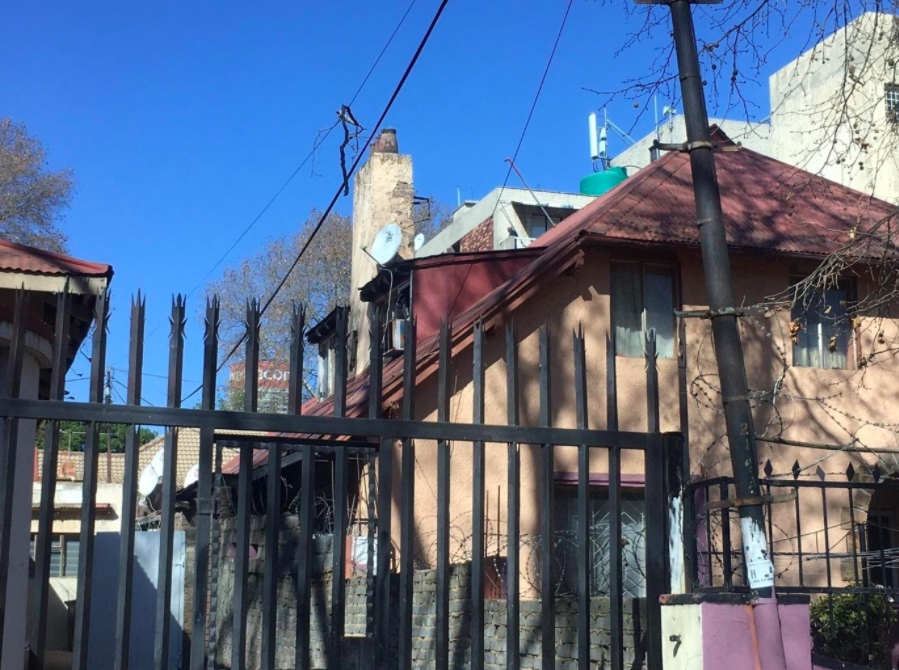 Flo Bird points out that a Residential 4 Zoning means that the property owner and any future developer has the same rights as the large block of flats next door. The Johannesburg Heritage Foundation would have great difficulty opposing the demolition for a new block of flats in the context of the densification policies of the City of Johannesburg and the proximity of this  house to the Louis Botha Avenue  Corridor of Freedom.

Flo takes a realistic view: “The JHF would be prepared to offer help with restoration and perhaps with advice and design on new outbuildings to bring in additional income we might have a chance of saving it, but there is no way the COJ will oppose demolition for higher density and the PHRAG would not be keen either.”

In my opinion considering that each Herbert Baker house makes a unique contribution to the built legacy it is a great pity that heritage should be trumped by densification. To be realistic there is a heavy demand for accommodation in Yeoville despite the infrastructure crumbling under the pressure of numbers.