I thought this would be a gentle essay featuring a well-loved Cape Town heritage landmark. But between my first site visit and an interview with ‘Friends of the Mill,’ John Hammer, Devils Peak blazed, roared and leapt with a great fire. A UCT library/reading room filled with treasures, burned, structures and woodlands were consumed in spectacular fashion and the Mill and adjacent houses became forlorn, smoking ruins in the process. Now the task of Friends of the Mill is not so much about mollycoddling and preservation, as about resurrection and restoration. Faced with a highly visible and mighty project, John mused: perhaps this is the sort of exposure we don’t really want? 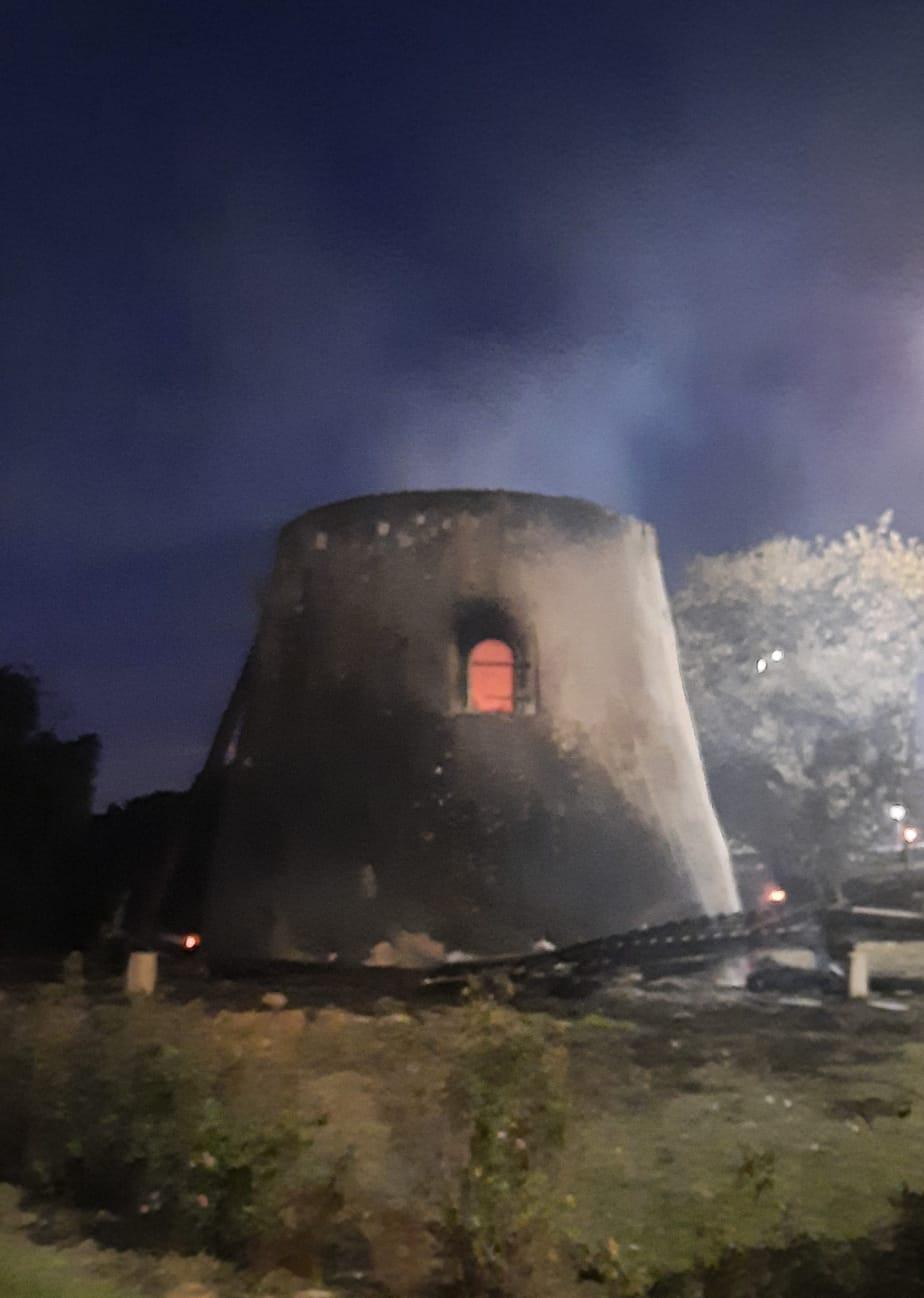 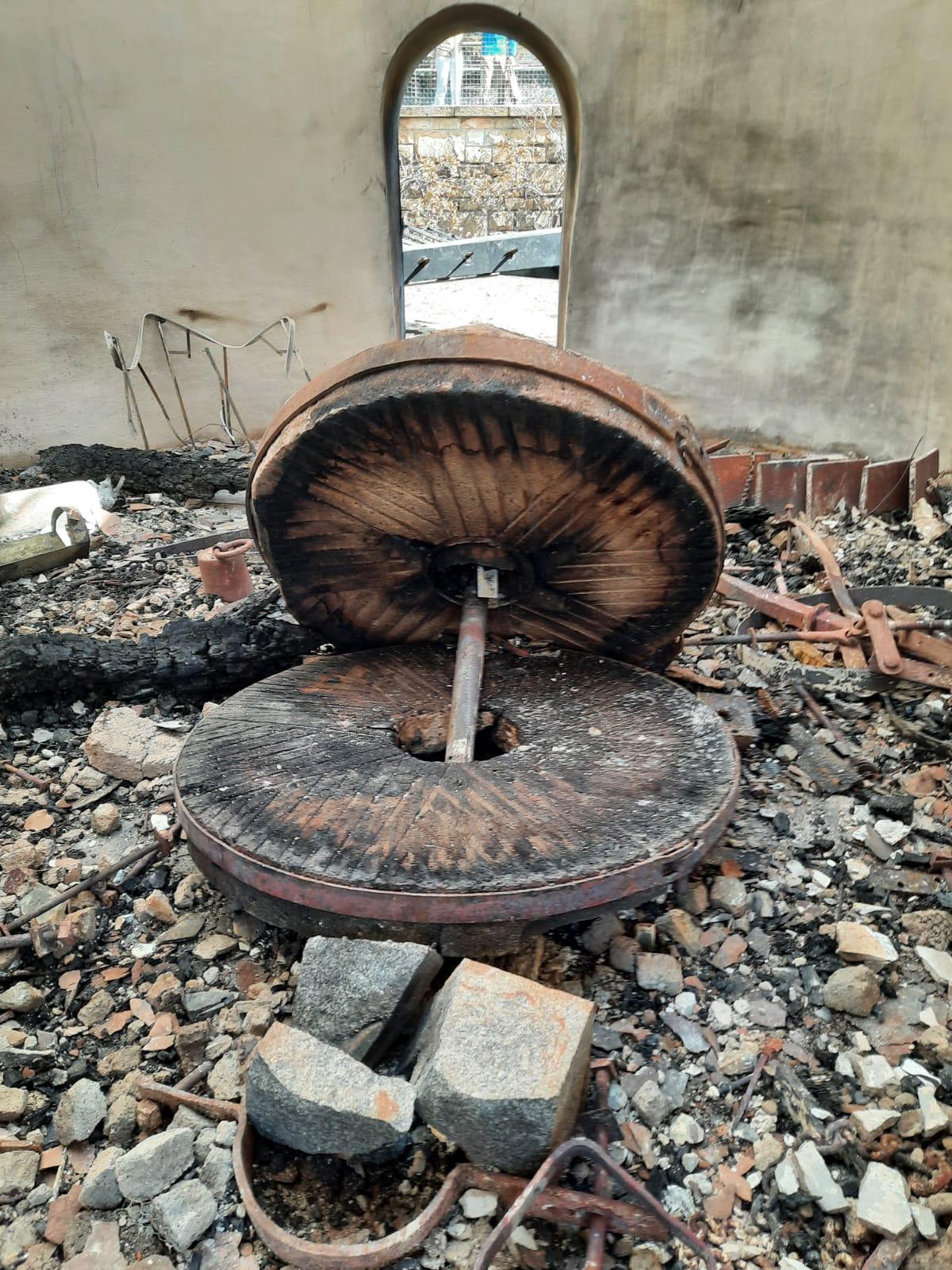 Upper and lower mill stones. All that was left after the fire. (John Hammer)

But, he went on to explain, offers of help and support were pouring in from inside and outside the country. He and his colleagues are resolved to fashion Mostert’s once again into a peoples’ mill, offering a very special and rare peep into the past.

By the end of the Seventeeth Century, there were many vernacular windmills operating on the farms on the land below Devil’s Peak along the Liesbeek River valley where now the Southern Suburbs stretch. Built probably without great skill and design, not many mills survived the fierce Cape gales. Faced with this obstacle, The Council of the Dutch East India Company set new standards. They imported materials and skilled artisans from Holland early in the century for the erection of a model mill, Oude Molen, which unfortunately, apart from two millstones, no longer exists.

On the farm Welgelegen, owned by the van Reenen family, Mostert’s Mill, named after a van Reenen son-in-law, was built to the new standards in 1796. Welgelegen, with its thirty slaves, was prosperously farmed for well over a century, yielding wine and brandy, fruit and hay. Welgelegen was appraised in 1873 at the height of its prosperity. The inventory, included among others, two houses, a brewery, a bakery, stables for 16 horses, 300 choice fruit trees, 70 000 vines. 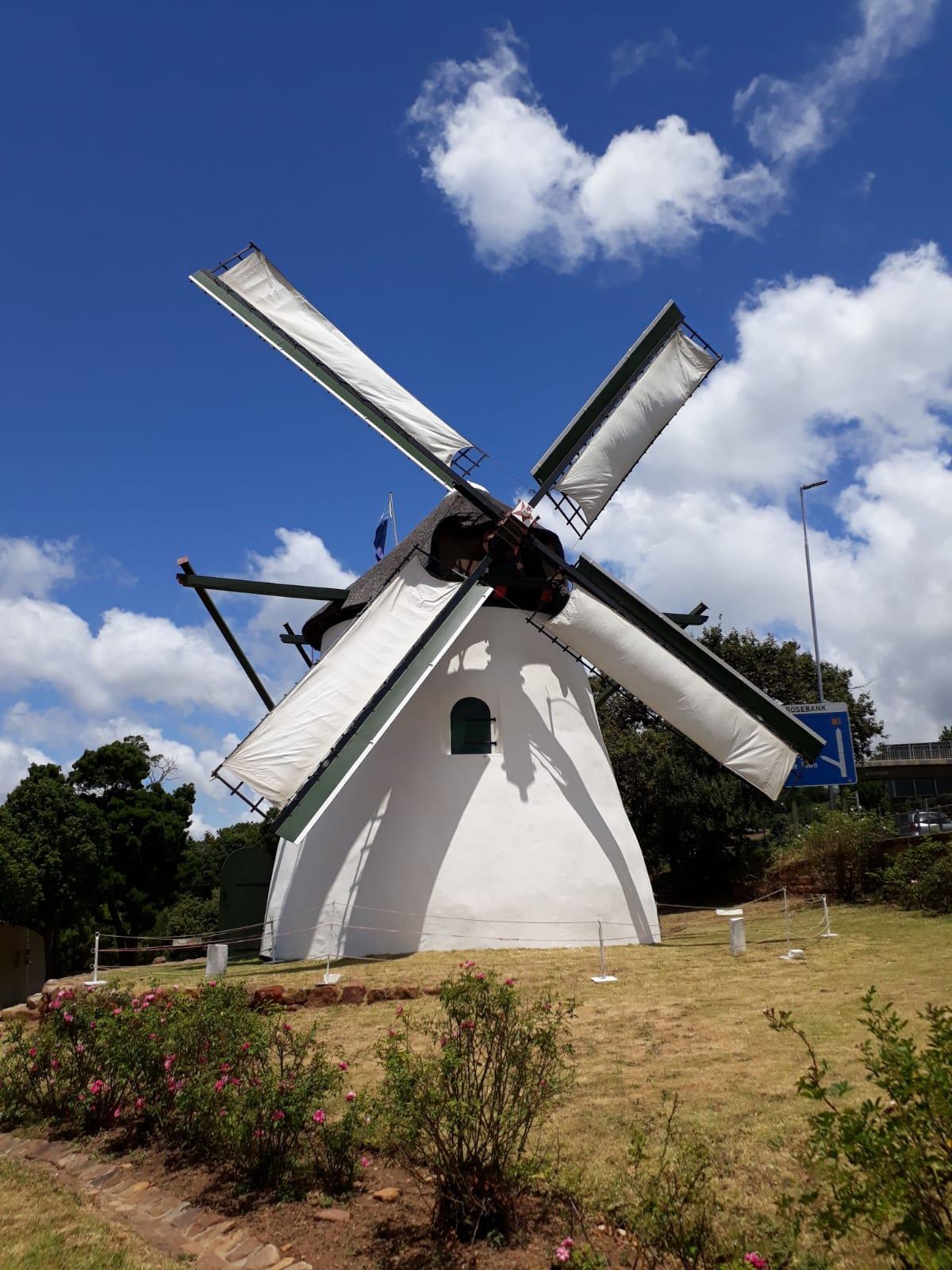 In 1890 Cecil John Rhodes acquired Welgelegen and the old farm homestead was redesigned and renovated by architect Herbert Baker for John Blades Currey, first manager of Groote Schuur estate. Rhodes bequeathed Groote Schuur to the people of Cape Town after which the mill was managed by the council but not used for milling. It fell into disrepair until restored in 1935 by the Public Works Department using millwright John Bremmer’s Dutch company and supported by the Netherlands Government and the Holland Mill Society. The mill and the adjacent threshing floor were declared national monuments in 1940, but deterioration continued.

As a result of the influence of James Walton, Honorary Life President of the Vernacular Architecture society of SA [VASSA], a society sub-committee was formed to deal with the preservation of the mill. This eventually resulted in the formation, in 1993, of the Friends of Mostert’s Mill [FoMM]. Walton and Andre Bakker a Dutch master miller became patrons of the Friends. Another renovation was completed in 1995 by Fagan Architects assisted by the Dutch millwrights, Dunning and Bremmer. Thanks to the Friends, until a few weeks ago, the mill remained intact and in full working order. Milling once a month when possible. Hammer, an experience miller, and Anthony Buckland, whom he trained, ground wheat into whole meal. This could be bought at the Mill and a sample loaf was baked by Buckland for tasting.

Windmills are the ultimate, environmentally clean machines. Mounted on strong tower like buildings, graceful, wind-turned sails, drive geared shafts which operate grinding stones or pumps or saw blades. Windmill roofs or caps can be rotated to face into the wind whatever its direction.

Drawing showing the inner workings of a typical mill via John Hammer.jpeg 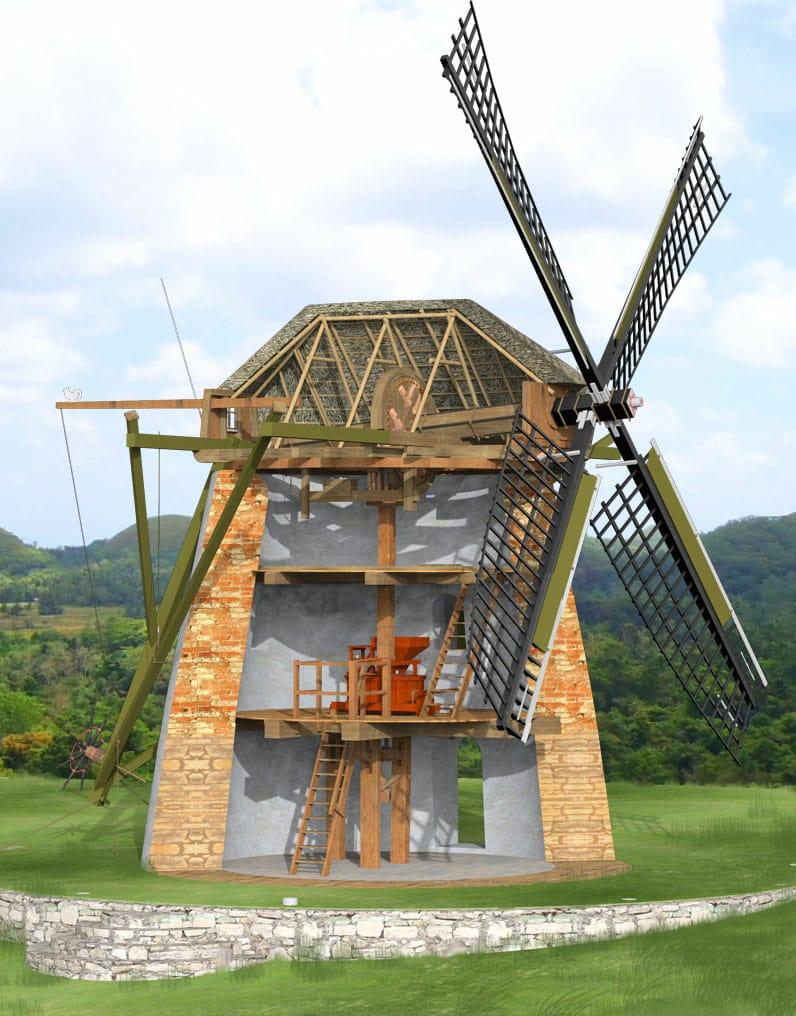 Although one might think mills originated in the Netherlands, they were in use in Persia and Greece before the Christian era. But true, the windmill has become a famous symbol of Dutch tradition and many of the towering structures still glorify the Dutch countryside. Today they mainly serve the tourist trade. By the fourteen hundreds, the Dutch converted windmill, grain grinding power to pumping power in order to turn the low lying polders into agricultural land. And during the Northern Renaissance a mill owner named Cornelis Corneliszoon van Uitgeest [1550 -1607?], adapted his mill to saw wood planks thirty times faster than by hand. The resulting silent, pollution clean, industrial revolution assisted the expansion of Dutch shipbuilding and mercantilism.

Currently, more windmills in the form of electricity generating, wind turbines are operating in China than anywhere else. And who can fail to be enchanted by those whispering giants on the wind farm near Caledon?

Today, Mostert’s is the poor, damaged ‘sole survivor,’ the last outpost, the only windmill in Africa and one of only three in the Southern Hemisphere [Tasmania and New Zealand]. Watch her rise from the ashes with her sails joyously turning in the wind again.

Many thanks to John Hammer, dedicated miller and current Chairman of FoMM.