A stroll through the Heidelberg Kloof cemetery 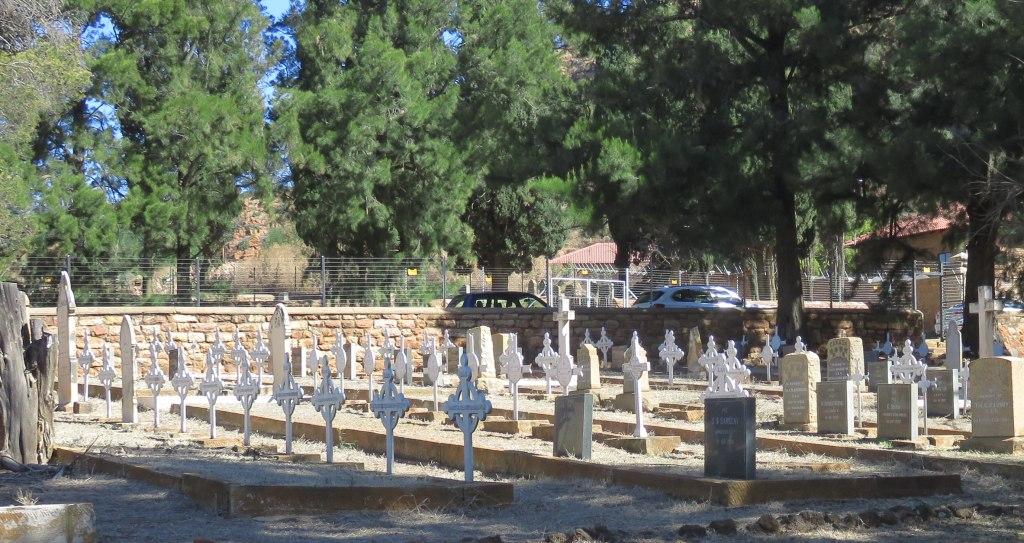 Beautifully situated in the Heidelberg Kloof is the Kloof cemetery, the original and oldest cemetery of the town. In fact, the oldest grave goes back to before the town was established. I'd like to take you on a walk through the graves, picking up a specific grave stone here and there.

The town started with Heinrich Ueckermann, he set up the first trading store in what now is the town. 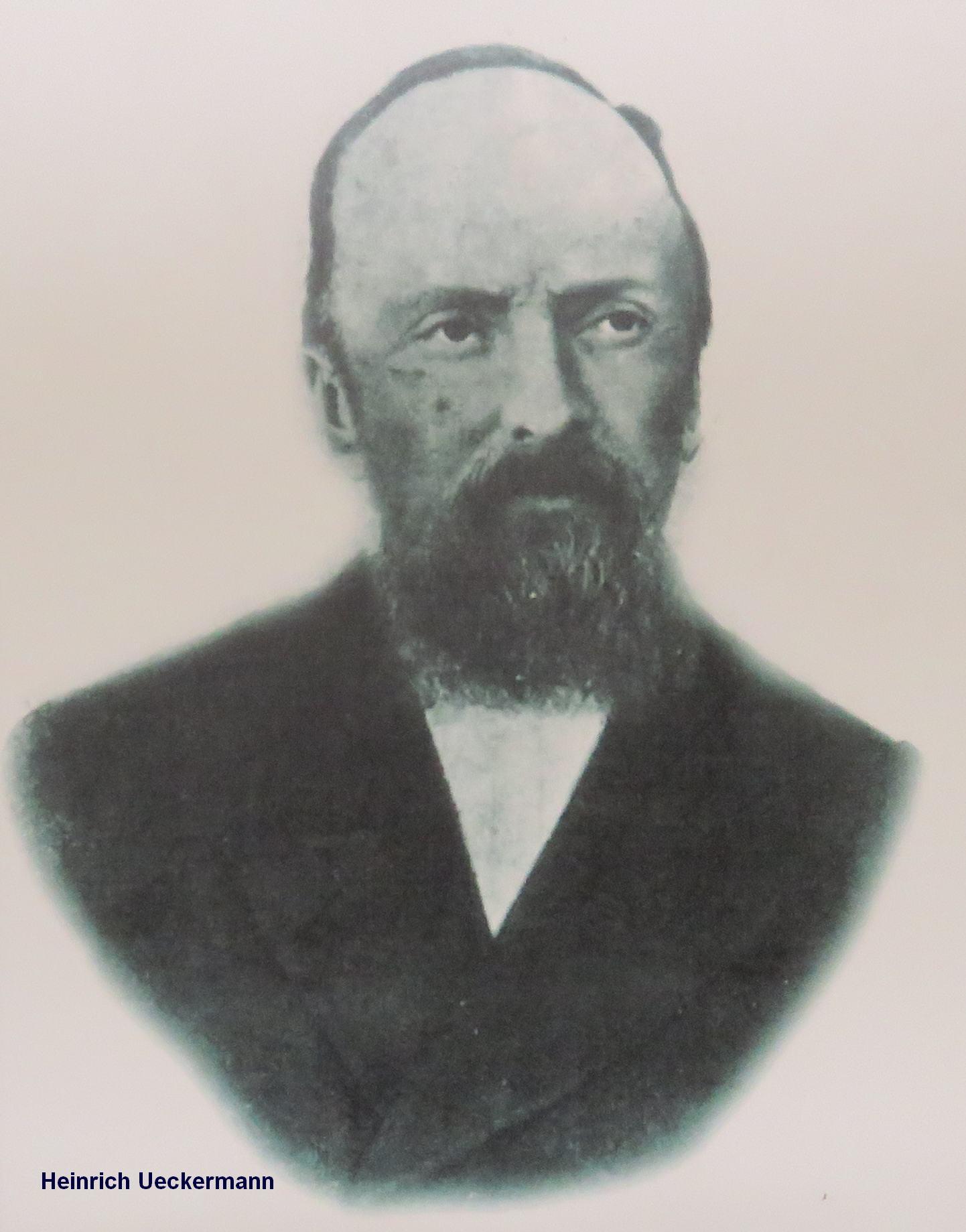 He originated from Germany and named the place after Heidelberg in Germany where he studied (the sources don't reveal what he studied). He arrived in South Africa in 1849, disembarking in Durban. He set up business in Pietermaritzburg and two years later got married to Elizabeth Mary Mason. She bore him 14 children.

After the birth of their first son, they trekked extensively by ox-wagon into the interior as far as the Soutpanberge. It was on this trek that their first daughter was born in 1856 (a personal note: it is always an amazement to me how tough people were in those days that they could trek for months on end and have babies at the same time). On another trek he got to the farm Langlaagte and decided that this was a good place to establish a trading store thus bringing an end to their wanderings.

From the farmers Strydom and Venter he purchased a piece of land to set up a trading store. This piece of land still exists as stand no.92 on the corner of Ueckermann and Kerk Street. The picture below shows the trading store in the early days. 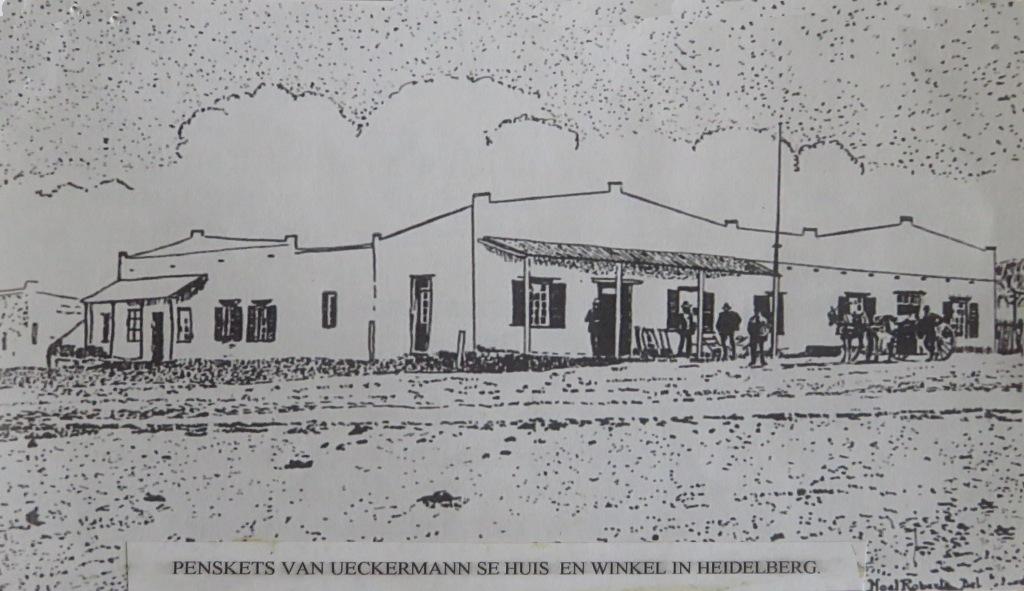 On his initiative a town was laid out and proclaimed.

His business was obviously successful and he became a respected citizen of the town. He represented Heidelberg in the Volksraad (Parliament) and was a member of the executive (uitvoerende raad). In business he not only had the shop, he also opened a chemist (which gave rise to the thought he may have studied pharmacology in Germany) and became a building contractor. He was also a member and the secretary of the Nederduits Herformde Kerk and it was under his supervision that the first church was built in 1864/65. 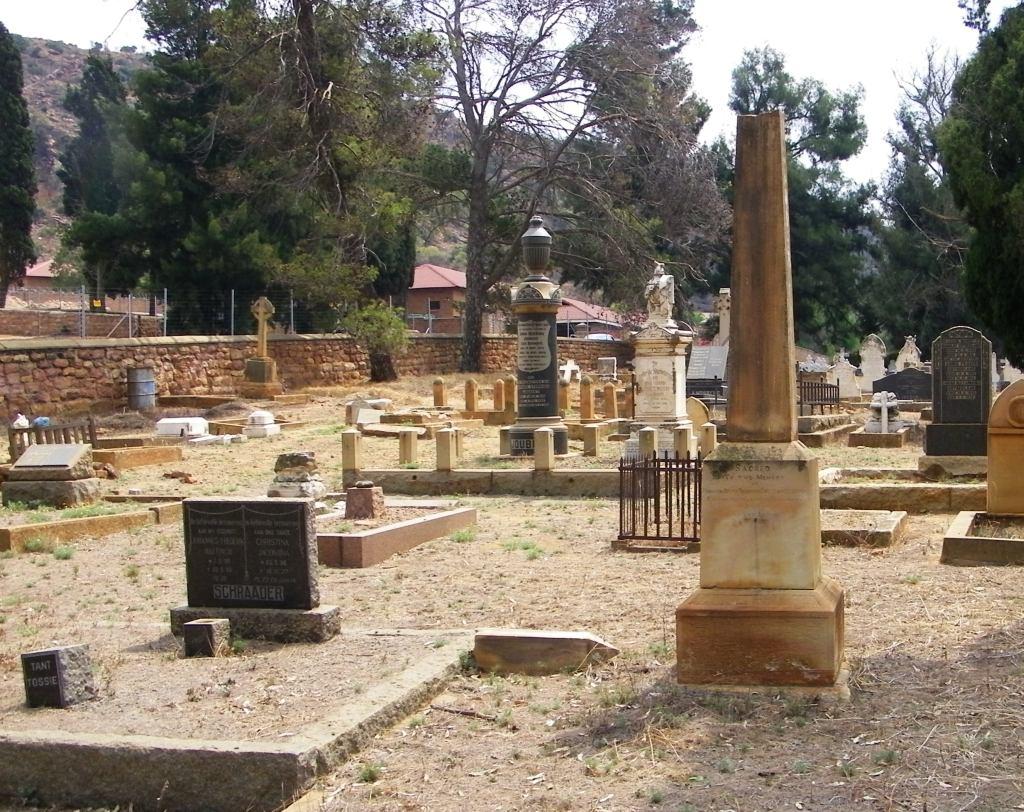 The Grave of Heinrich Ueckermann

The inscription on the gravestone reads:

A note: Mecklenburg is not a town or a place, it's a state in the Federal Republic of Germany. His exact place of birth is Schwerin, one of the major towns in Mecklenburg.

On the side of the gravestone it says:

Near the bottom of the cemetery, towards town, is a grave completely overgrown by a Yucca tree. With its spiky leaves it protects the grave plate very well, protecting against the weather and erosion and also against humans. Moving a couple of leaves I got a glimpse of the name Ueckermann, and that really set me going. I had a difficult job getting to the inscriptions. 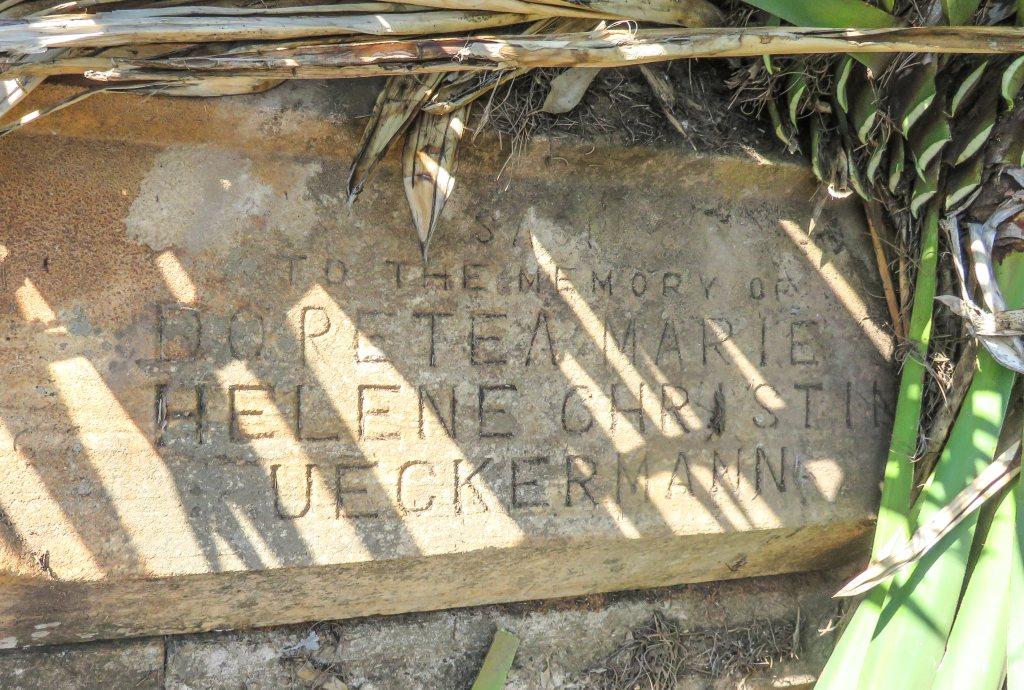 On the one side the inscription says:

SACP
To the memory of
DORETEA MARIE
HELENE CHRISTINE
UECKERMANN

And on the other side it says:

The three letters in brackets are not visible and have been assumed.

Searching through my sources I came to the conclusion that this was the mother of Heinrich. The background to this is that there was another Ueckermann in the district, it was Carl August Friedrich, a brother of Heinrich. He joined Heinrich later in Heidelberg and was the first public prosecutor and later a Justice of the Peace. Carl was Heinrich's junior by 10 years and also made his way to South Africa around 1860. He came with his mother. The sources state her name as Dorethea Marie Helene Caroline and she died in Heidelberg in November 1870.

John Alfred Ueckermann died whilst serving with the Heidelberg commando during the Boer War. I have not been able to find out how and why, I'll keep on looking. He was a grandson of Heinrich Ueckermann and son of Frederick Ernest Ueckermann. Frederick was the first child born to Heinrich and Elizabeth in Pietermaritzburg 1851. 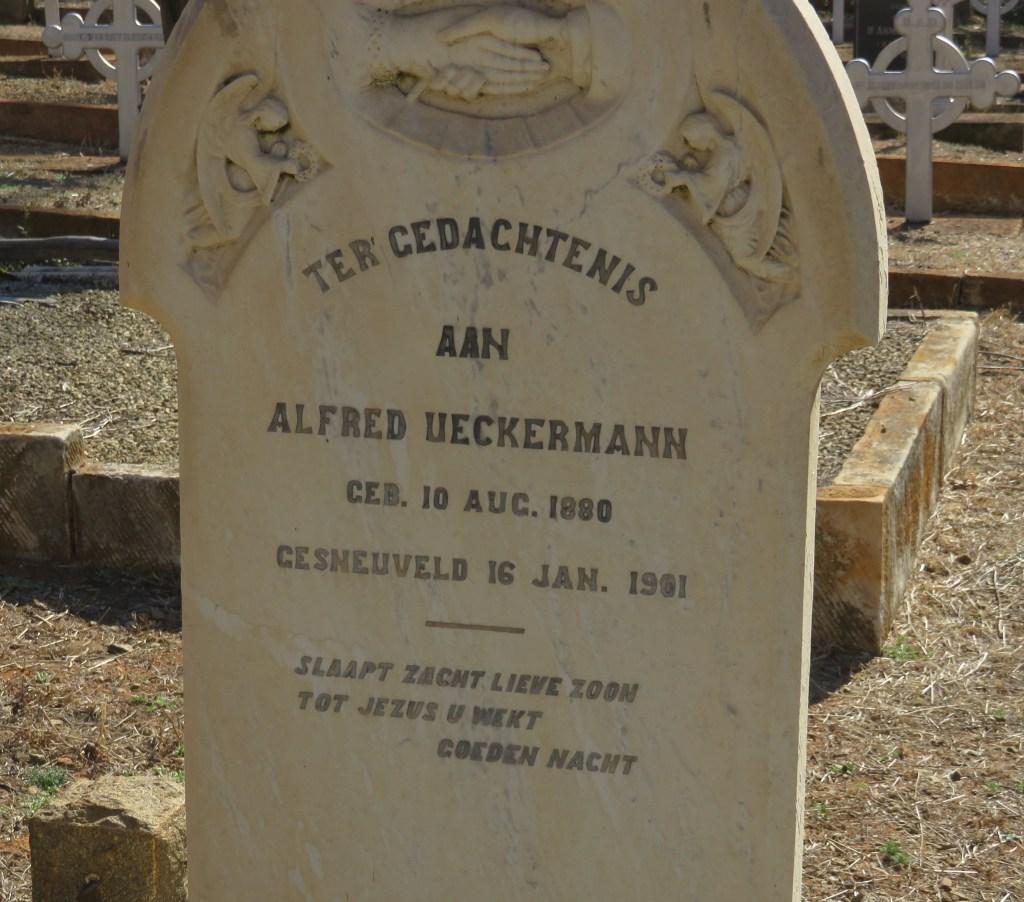 The plaque on this grave states:

Thomas William Fannin
Surveyor
of the Darcle, Natal
who laid out the town of Heidelberg
shortly before his death on
Dec. 19 1865
Requiescat in Pace

The last sentence is Latin and means 'rest in peace'. And I don't know about this place name Darcle, where is it?

TW Fanning was a surveyor from Natal who was moving through the area looking for work. Heinrich Ueckermann gave him the contract to lay out the new town. Unfortunately a severe attack of malaria caused his demise before he could finish the job. During his sickness he was nursed in the Ueckermann house. He was the first person to be buried in the Kloof cemetery. 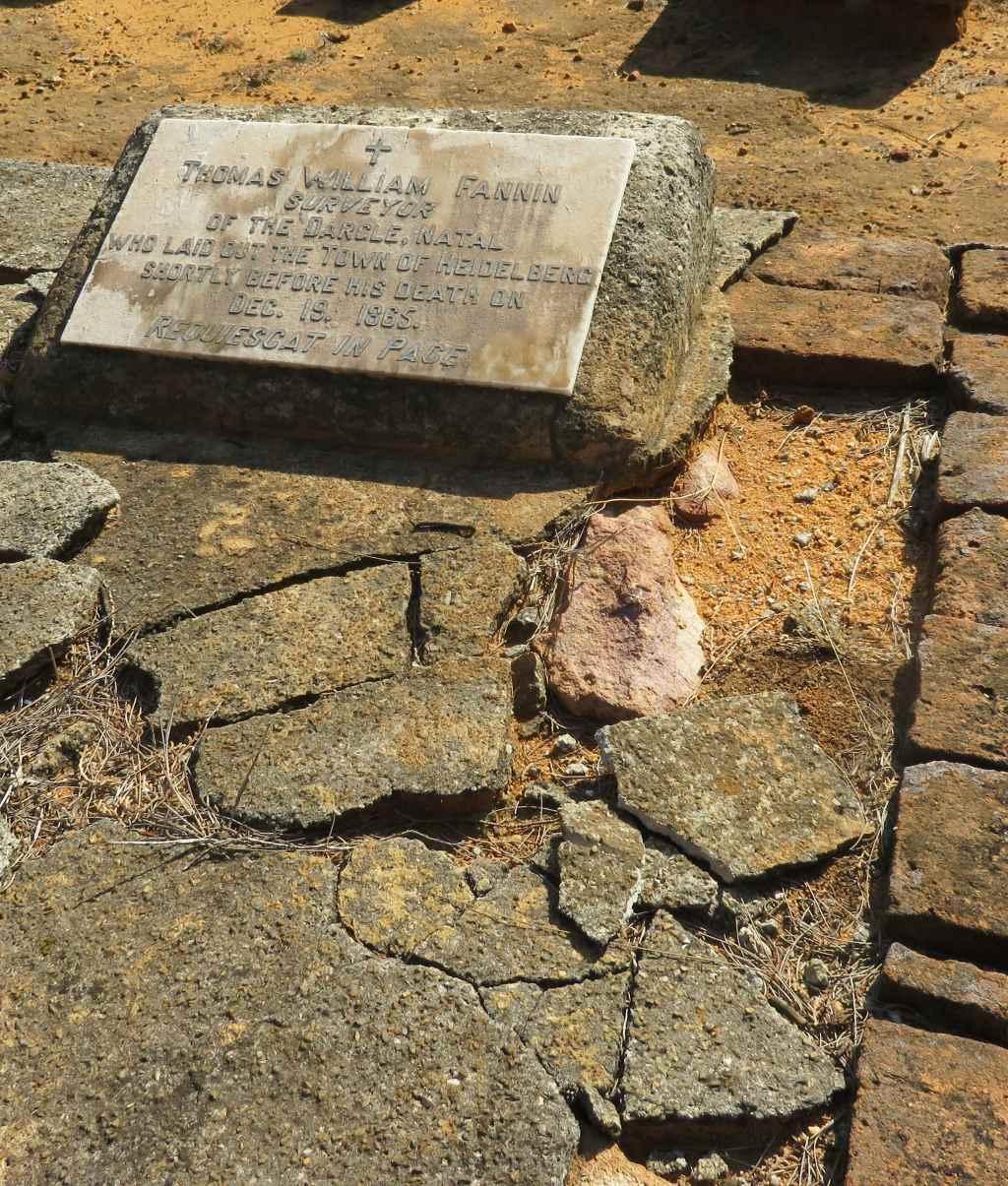 On the memorial honoring the fallen comrades of the Heidelberg commando appears this name, Harra von Zeppelin. He was one of the German volunteers who had joined on the side of the Boers. 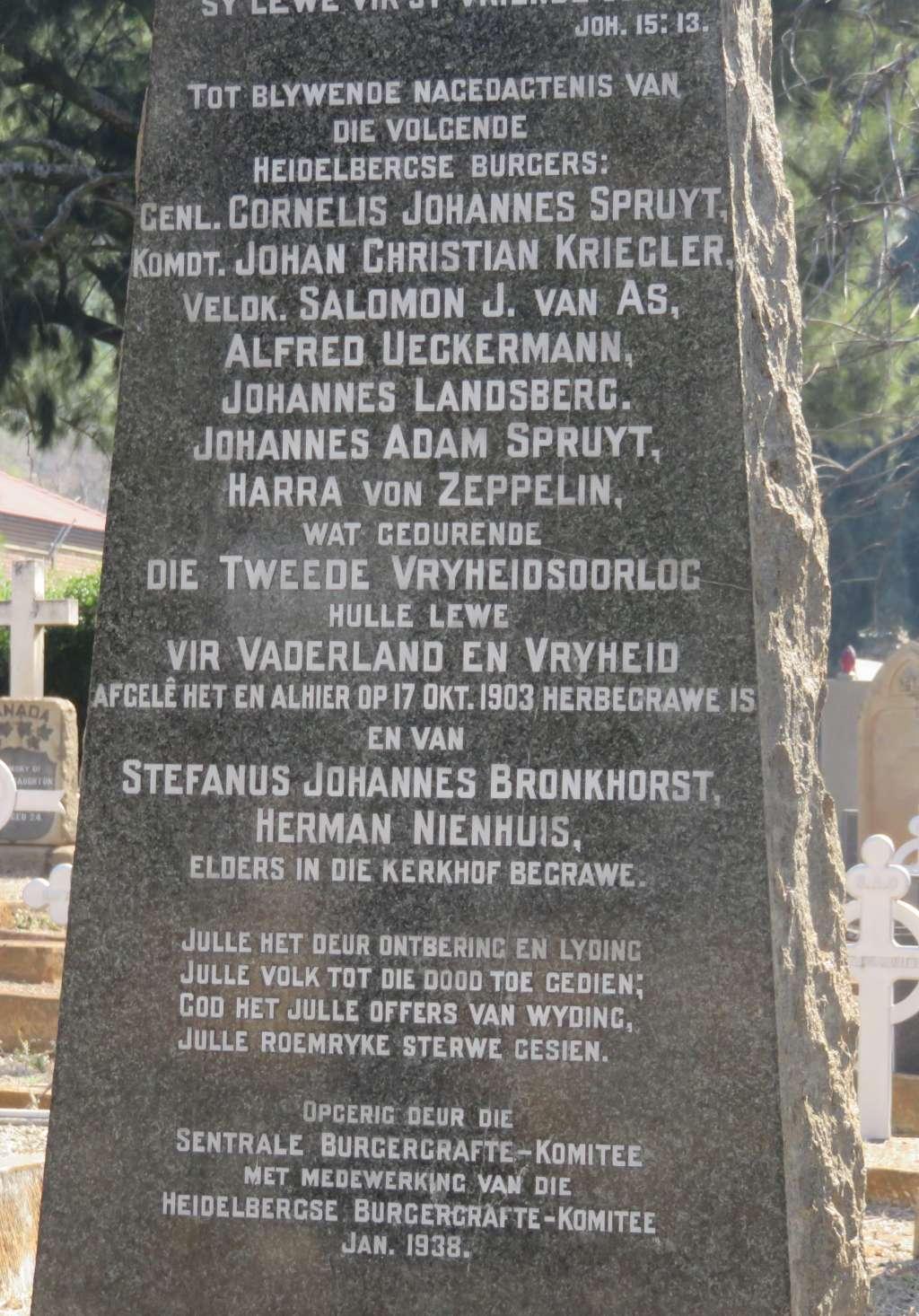 When war became imminent some Germans formed a corp under the command of Oberst (Colonel) Schiel. That unit saw action very early in the war at Elandslaagte, that is a railway station between Ladysmith and Dundee. It was in that battle that the German corp suffered heavy losses and it cost the life of the Graf von Zeppelin. According to witnesses he had received a shot to the head and barely conscious also received a wound when cut by a sabre and stabbed with a lance by the cavalry of the enemy. He survived the night and only died the next day.

He had the rank of an officer and in the few days with the corp became very popular, although he insisted that his fellow comrades address him by his title 'Graf' (Count). I could not find out anything about his life in the Transvaal before he joined the war. He must have lived there since he was with the action from the beginning. 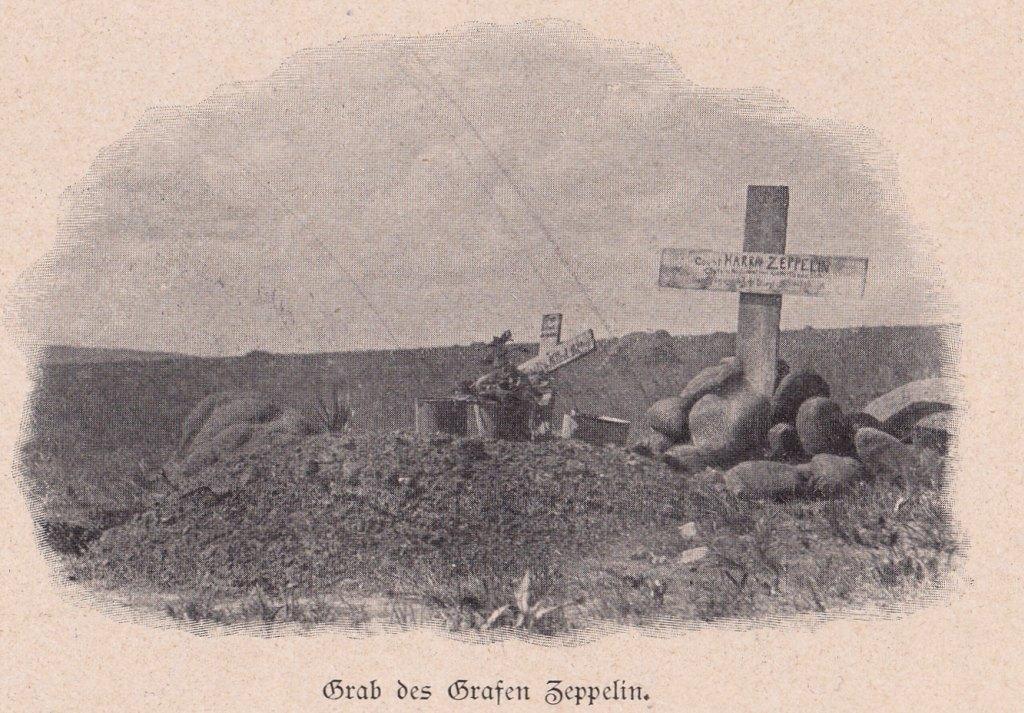 Another name on the memorial that drew my attention was that of Salomon van As. Van As was a field cornet during the Boer War as a member of the Heidelberg commando. He was involved in the killing of Captain R.C.H.Miers. The incident occurred during September 1901 at Riversdraai 12 miles south of Heidelberg. Captain Miers approached the Boers under a white flag most likely with the intention to convince them to surrender. What exactly happened is not known. The British claim the Captain was shot in cold blood which makes this a war crime whereas van As claims he acted in self defence.

The British felt so strongly about it that his name came up in the peace conference at Vereeniging as one of three burghers that had to hand themselves over to the British for investigation. He was imprisoned in the Heidelberg jail where the court case took place. Van As was not given the opportunity to call his own witnesses, was found guilty and was condemned to die. The execution took place at the back of the jail, the bullet holes in the wall remain as witnesses to that event.

A few years after that the father of van As received a letter of apology from the British military, admitting that the court case was irregular and thus van As had not received a fair trial, compensation was offered to the family but refused. 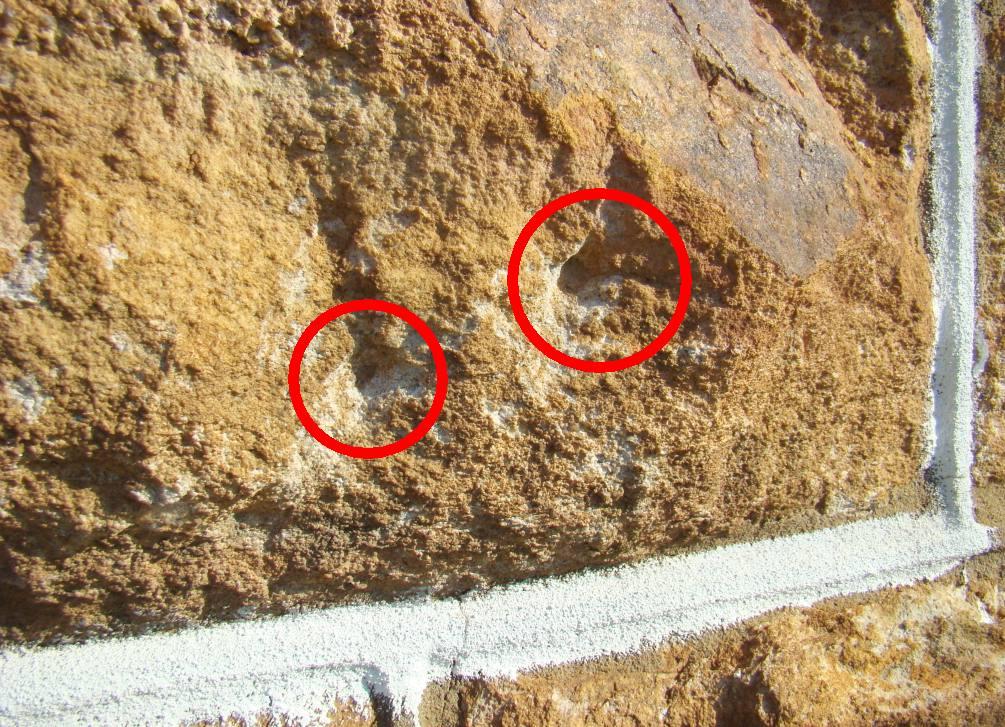 Bullet holes in the wall of the jail

There is a large section of war graves for British soldiers killed during the 2nd Anglo Boer War. Most of them are marked with the standard steel crosses and some with proper grave stones.

Here we meet somebody we know from the Salomon van As episode mentioned above: Captain Miers who died as a result of the confrontation with van As.  The full inscription reads:

In Memory of
Ronald Hill MacDonald Capel
Miers,
Lieutenant 2nd Batt.
Somersetshire
Light Infantry,
and captain in the
South African Constabulary
was killed at
Riviersdraai near Heidelberg,
on 25st September 1901. 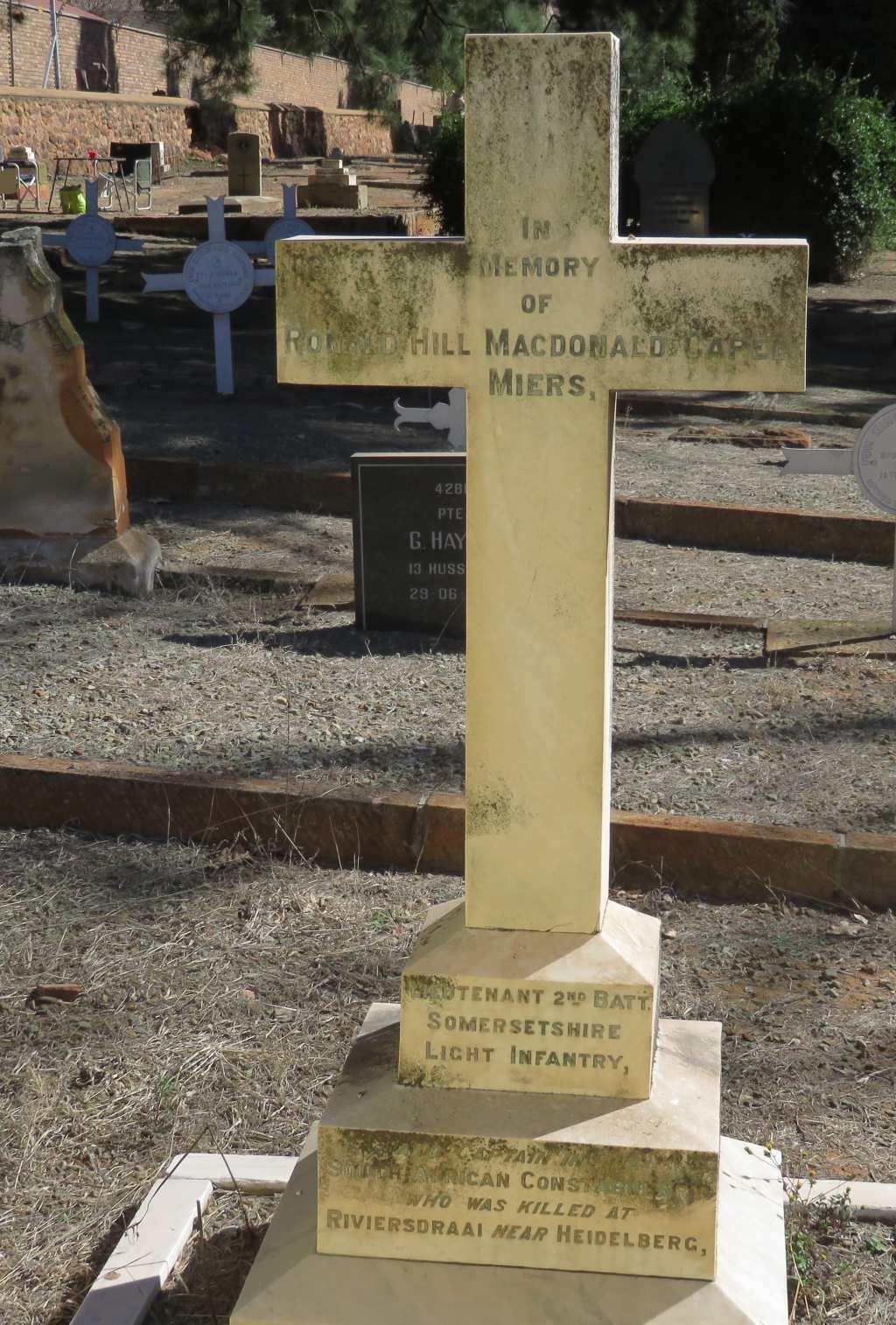 The graves are in two locations, one at this cemetery, Kloof, and the other location at what is called the camp cemetery. That one is on the way out of town toward Nigel. There should also be some graves from the black camp, the whereabouts of that is not known, at least not to me. 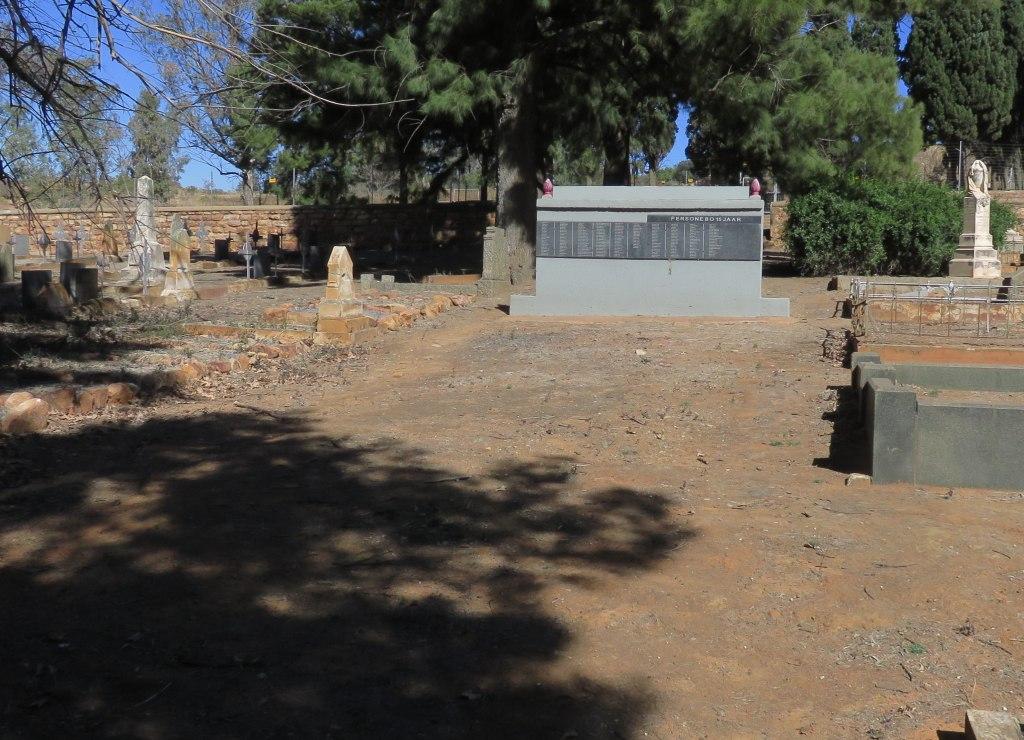 Graves from the First Boer War

The heading is thus wrong, I couldn't think of anything better. The graves are certainly from the time of the annexation of the Transvaal by the British and the British army was present in the area. Although there was no garrison at Heidelberg, these must have been soldiers passing through or staying in a temporary camp. 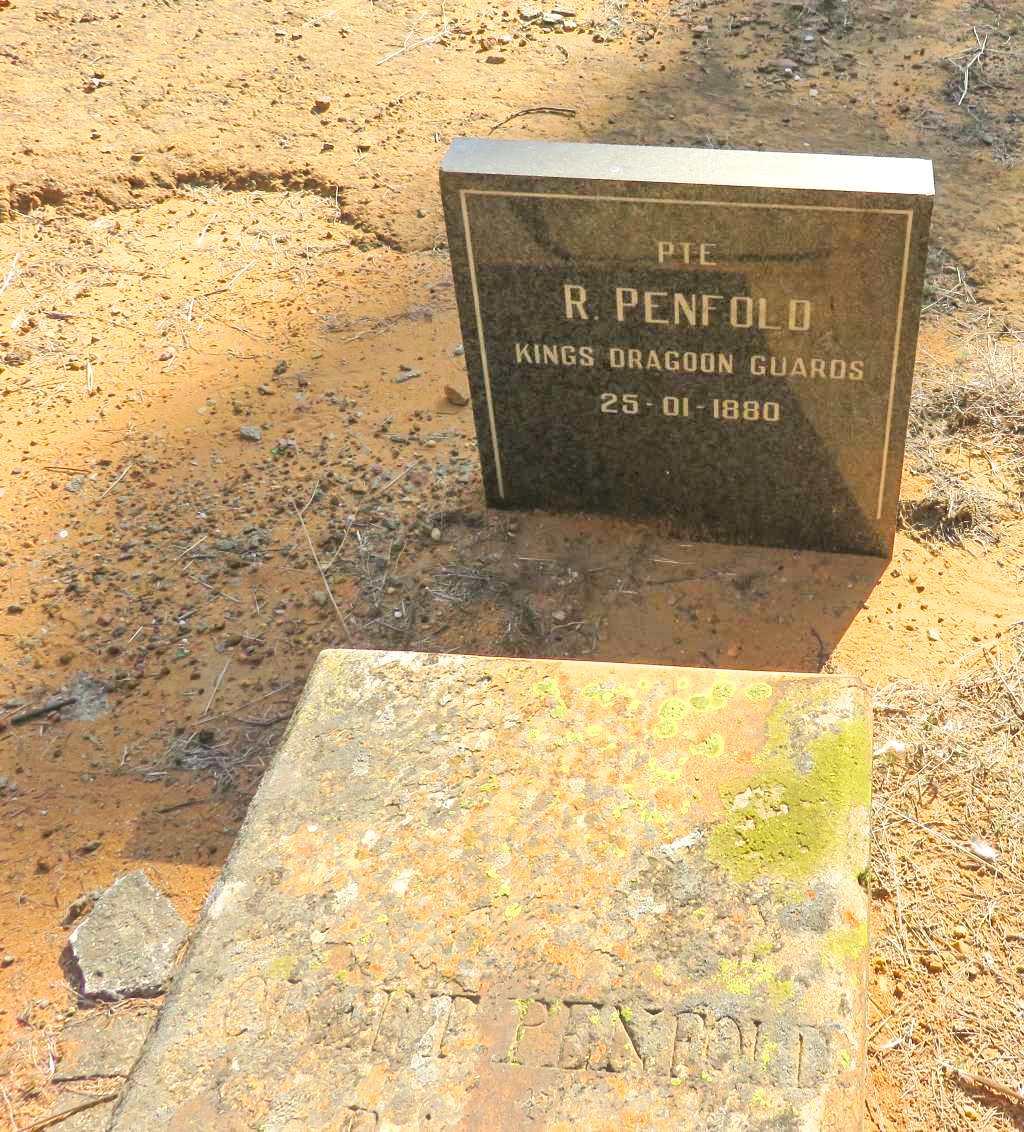 This grave had me a bit confused, because a person of the same name is buried at Goeiehoek not far from here. The name is the same, but the dates differ. The one resting here in Heidelberg is the son of Pieter Daniel at Goeiehoek (click here for details). He came with senior from the Cape in 1838 to fight in the Battle of Blood River. Coming back from the battle, senior settled at Goedverwachting and junior at Nooitgedacht. 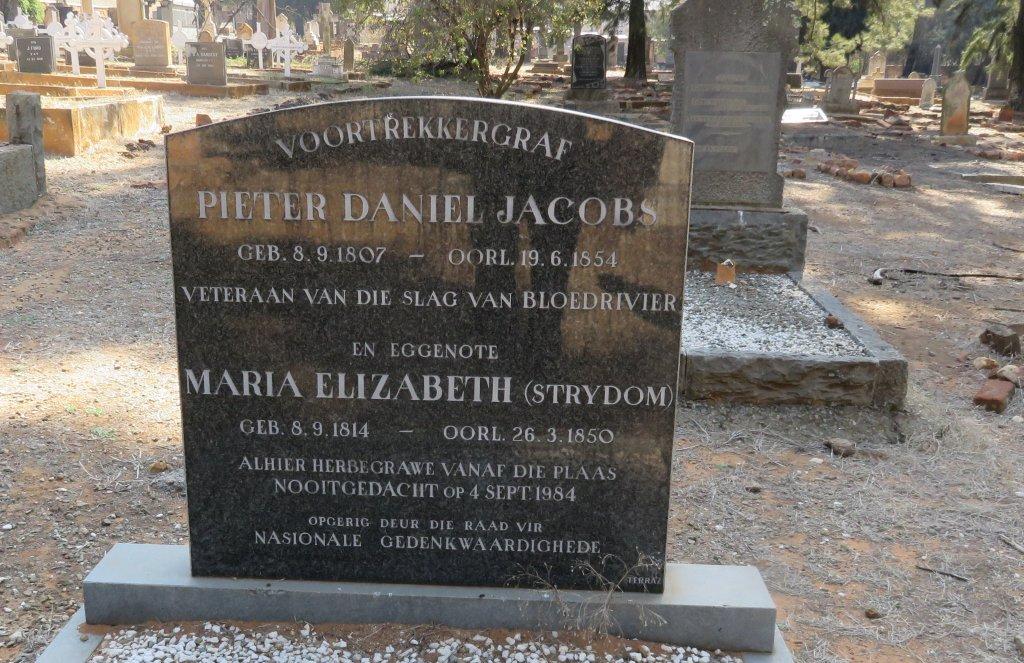 There are two graves, that I have come across, with the name 'van Warmelo'. The oldest one is that of Nicolaas Jacobus van Warmelo. He came from Holland and initially served the church in the Soutpanberg. He was called to be a minister of the Herformte Kerk in Heidelberg from 1868. From 1885 to his death in 1892 he was the minister for the United Church. 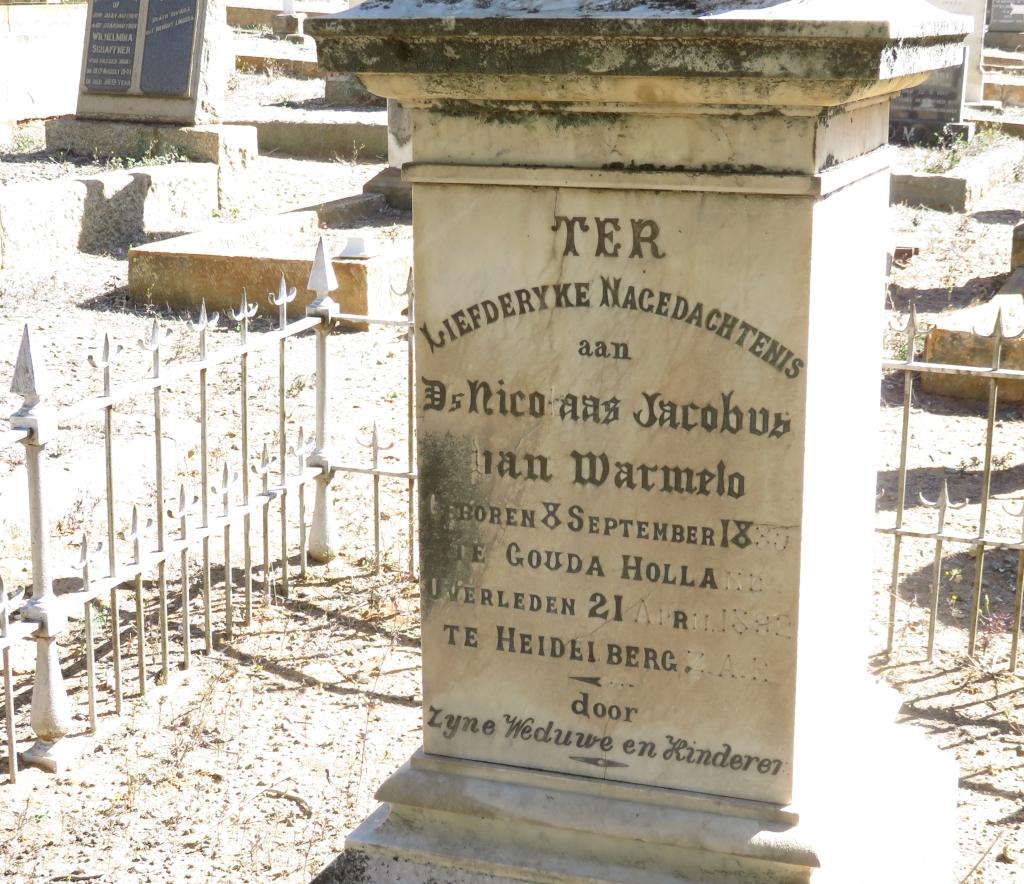 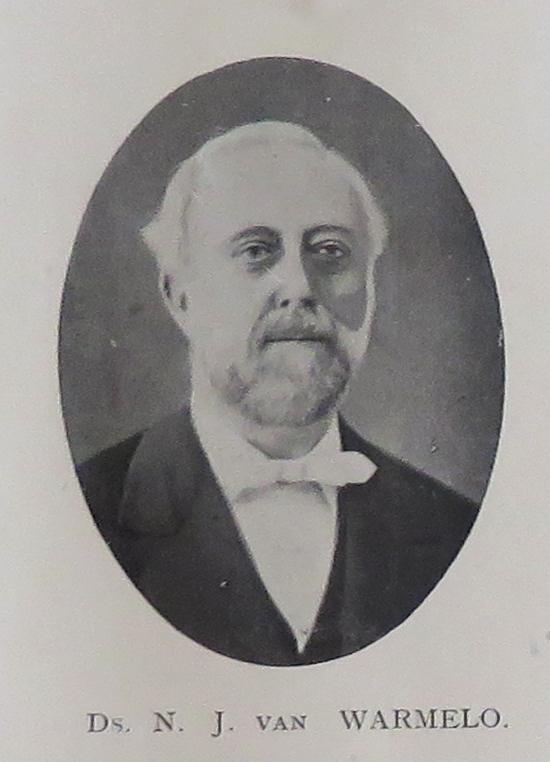 Dietlof van Warmelo is well known because he wrote a book, 'On Commando', about his time as a Boer soldier during the Boer War. He wrote it whilst imprisoned in India. I like his style of writing which is very down to earth, telling the story the way it was. I can't find anything about his life after the war. He lived to a good old age of 94. 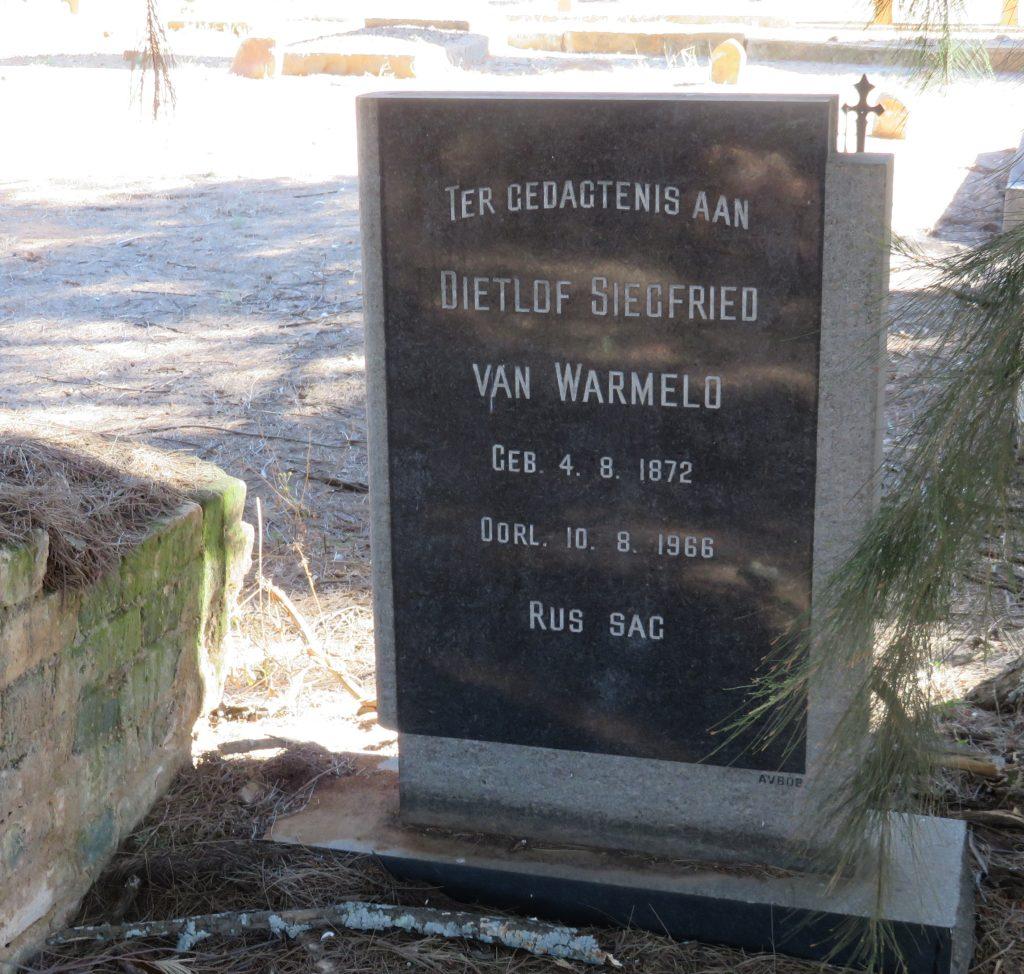 Writing seems to be in the family, his sister Johanna Brandt, known as Hansie, also wrote a book: 'The Petticoat Commando'. It was a book about the time when she lived with her mother in Pretoria during the war. They acted as secret agents, smuggling messages to Holland under the noses of the British occupation force.

By no means are these all the interesting graves. There is the newer section to the Kloof side of the concentration camp graves. I have not touched that section yet. It does contain the grave of AG Visser, the well known Afrikaans poet and physician who lived in Heidelberg. Also not reported on is the Jewish graveyard, just over the road. This is not accessible, an electric fence and locked gate makes access very difficult. It is a pity, but I do understand why this has to be done.

About the author: Horst originated from Germany many years ago, has spent a life time working for some major chemical companies. Throughout his life he has had an interest in local history and has now in retirement made this his major hobby. He believes in not just doing the exploration and research but to also write down his findings. Check his website www.ruralexploration.co.za.