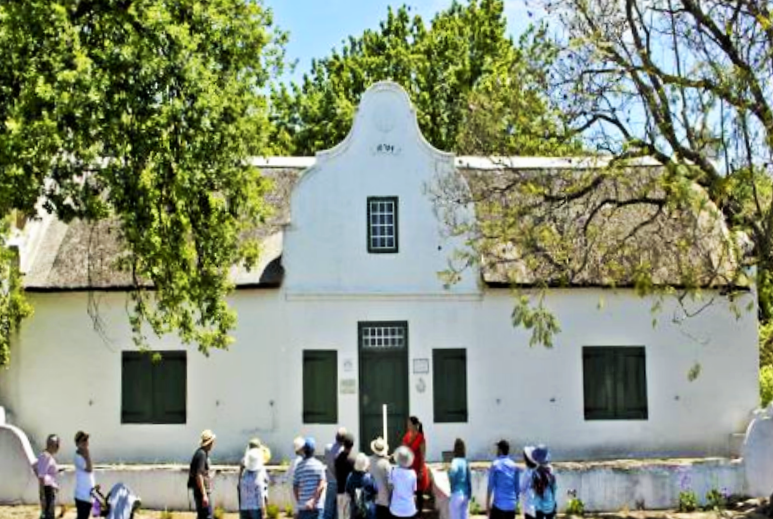 It is believed that the first VOC explorer, Abraham Gabbena, first stepped into the area approximately 5 years after Jan van Riebeeck had established his re-provisioning station. Apparently he was dazzled by the shimmering morning light emanating from the wet granite rocks in the area. He named them “Peerl” and “Diamandt”. The Khoe referred to these huge outcrops as “Tortoise Mountains”.

The Het Gesticht Museum at Number 112, Main Street, Paarl was where a contingent of members and friends of the Durbanville Heritage Society met our Tour Guide, Hybre Van Niekerk, on 17th October 2015. 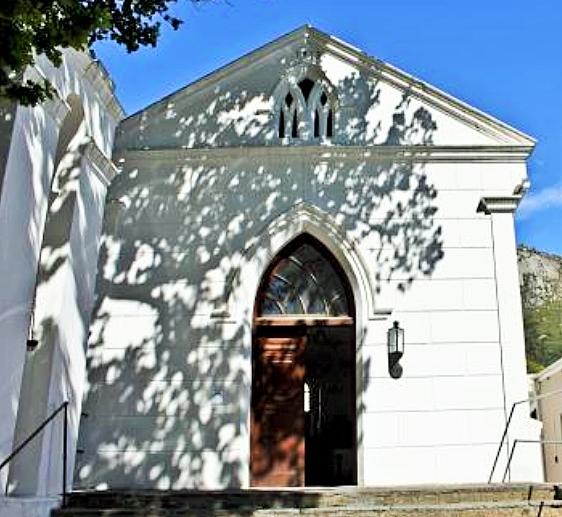 The Museum, set back from the Main Road and facing the mountains in the east, was the home of the 4th oldest church in South Africa. The Het Gesticht Church, completed in 1814, was built by the Paarl landowners to minister to the spiritual needs of approximately 80 slaves and their families from Mozambique and the British and Dutch East Indies who worked on the surrounding farms. In the beginning High Dutch was the “Lingua Franca” to the congregants until 1819 when the London Missionary Society sent Rev Evans to be the new minister and English was added into the services.

During the restoration of the church instituted by Heritage Western Cape prior to it becoming the museum, Hybre did a lot of genealogical research on the first congregants. She became friends with a number of the grandchildren and great-grandchildren of those families whose forefathers were the first children recorded in the 1820 baptismal register.

Opposite the church is a well preserved Cape Georgian House built for a Mr Van Der Spuy in 1826. Walking down the Main Road we appreciated the shade along the tree- lined avenue. The different species of oak trees were originally planted on the instructions of Governor Simon Van Der Stel and on maturity the wood was used to make wine-barrels in which wine made from the delicious Paarl cultivars could mature prior to shipping to Europe.

A short walk from Het Gesticht we visited the grounds of the Huguenot ‘Strooidak Kerk’ designed by Louis Thibault and consecrated in 1805. Dominee Thom was appointed as the first dominee. The Theological University was built nearby and in the church cemetery are the graves of 2 of Paarl’s pioneers, Gottlieb Wilhelm Antonie Van Der Lingen, and Doctor J R Zeederberg. The pastorie stands opposite the church. 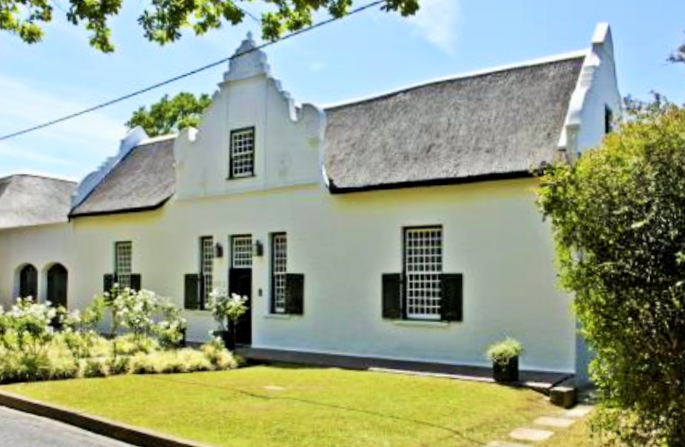 Further along set back from the road we saw the beautiful Cape Dutch / Georgian family home built to special specifications for Dr Zeedeberg, the local doctor and surgeon. Nearby in the square were a few more lovely examples of early colonial Victorian homes. 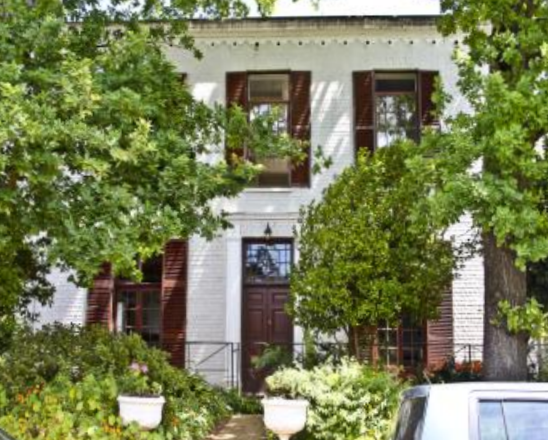 We admired the premises of the original Western Province Bank built in 1847. Because bank notes were printed on the premises the shutters on the windows were placed inside for security. 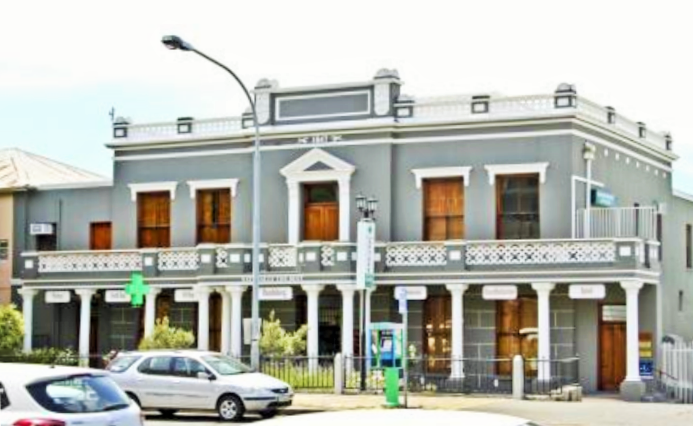 By 1842 the congregation of Het Gesticht had grown so much that a second church and school were built around the corner from the Zeederberg home. Sadly during the 1980’s a law was passed disallowing the coloured community to worship there and after the old school premises were sold, they were demolished. 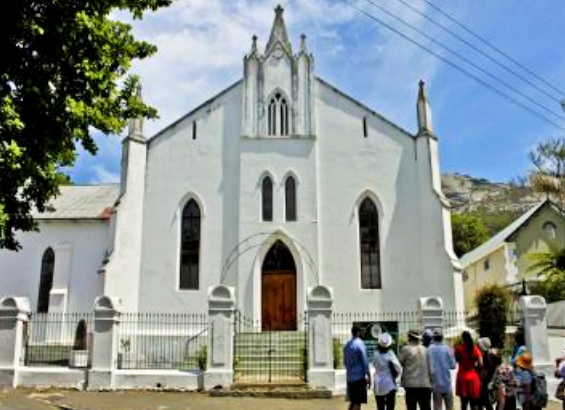 Back to the Main Road we saw the Classberg Building, with its brick façade built in about 1897 by Antonie de Wit. Further along the road is a fine example of Cape Dutch architecture, a manor house with a working mill at the back. Today it has been restored and is now home to the best bakery in Paarl, the Juno Bakery Mill.

Number 193 is an historic Herbert Baker designed home for the De Villiers family. Across the road was the family distillery and cellars where they distilled their famous Paarl Rock Brandy. It seems that Mr De Villiers was a very colourful resident of Paarl who, when he wished to visit his famous cellar, insisted his servants roll out the red carpet before he crossed the road. 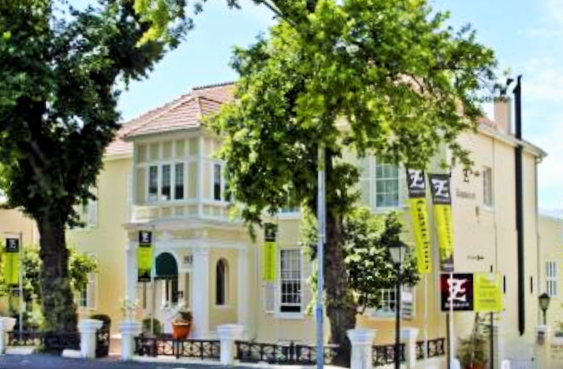 Thanks to Hybre we were able to visit the lovely inner gardens and the oldest wells in the grounds of Huis Vergenoegd, a double storied Victorian building. Opposite is another well preserved commercial Victorian edifice which housed the printing presses for P. M. Cross. 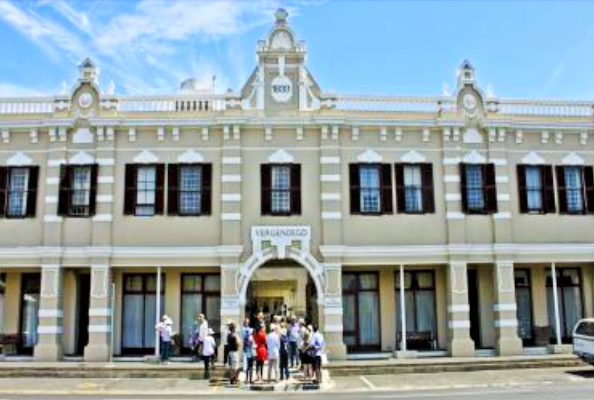 The Patriot Building played an extremely important role in the development of the Afrikaans Lanuage. ‘Die Genootskap Van Regte Afrikaaners’ was formed in 1875 to campaign for written Afrikaans to be accepted instead of Dutch. 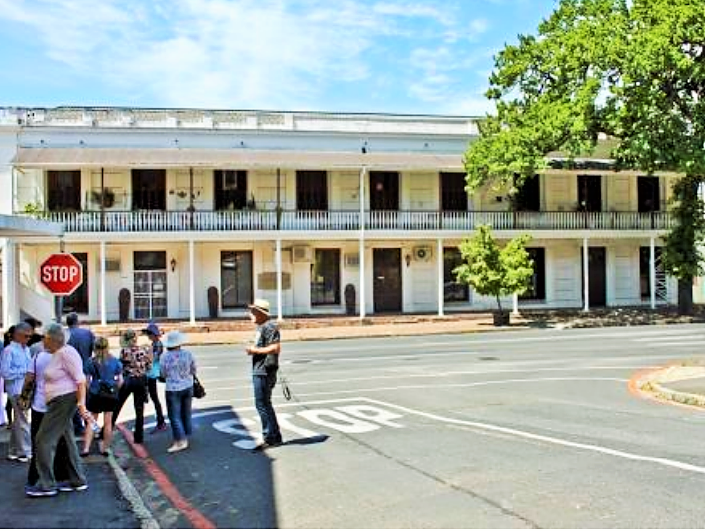 We completed our tour in the old building built in 1784 where the Paarl Drakenstein Heemkring Archives are housed. The Paarl Information and Tourist Bureau is at the rear.

On the opposite side of the road is the gabled police station built in the style of most of the government buildings of the time in the early 1900’s.

Hybre shared her passion for everything historical relating to Paarl with us and we were more than a little envious to experience how many of the heritage buildings in the town have been preserved. Thank you Hybre, you really whetted our interest and we plan to return and visit more of historic Paarl some time next year.