Some memories of Rosebank in 1966

These sketches were drawn in 1966 as part of a first year student project at Wits. It involved taking a walk through a familiar built environment and documenting the various textures and vistas that one encountered. I was still struggling to develop a drawing style of my own, and the kind of clean pen-and-ink drawings that mark my later work were yet to evolve.

I now consider these drawings to be somewhat archaic and outdated, but they do document a set of buildings that are no longer in existence and therefore deserve revisiting. Ironically the only space that still survives is the parking lot in front of Fournos, which is still just as soulless and lacking in human scale as it ever was.

It is not by accident that this narrative is totally devoid of black people. Events at this time took place at the height of Apartheid, and although most of the people you met in Rosebank were probably English-speaking and professed to hold liberal opinions, few would have had any contacts in the black community. The Progressive Party represented nearby Houghton, which was predominantly liberal Jewish in character, but Rosebank was waspish and voted for Dave Marais, of the United Party, a diamond merchant who chaired the (all-white) South African Football League and spoke in Parliament a total of three times in twelve years. 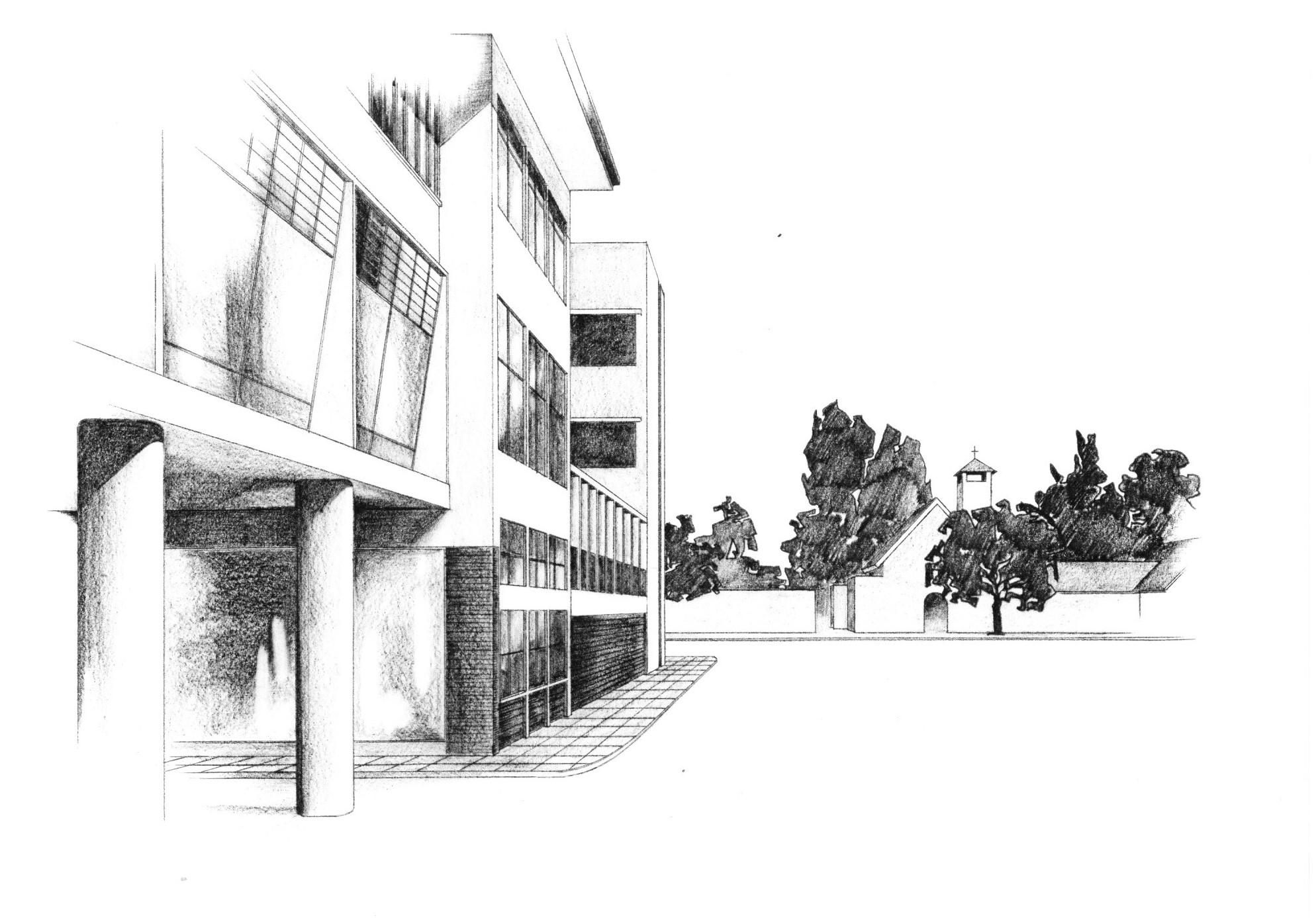 This was located behind the Kelvin Grove, seen in the centre left of the picture, with the underpass leading to Admiral’s Court in front. Across the road, on Cradock Avenue, was located a small Protestant chapel, whose name now escapes me and which has long been demolished. I think that today the site is the home of a pizza parlour that specialises in bad food and overloud music. The Kelvin Grove verandah, on the other side of the building facing Tyrwhitt Avenue, was a popular gathering place for students on Friday nights and Saturday lunch-hours, and was the place where the spotty, the unloved and the unwanted could get a last-minute invitation to a party that evening. It was also where, in March 1969, the Editors of the Rag magazine, WitsWits, held court every evening, drinking copious flagons of beers and laughing uproariously at the string of filthy jokes that anyone passing through was invited to share. They then published the collection in aid of charity. Despite its obvious lack of good taste, dubious literary merit and a brilliant front cover by Richard Smith, the Rag magazine was an immediate hit with travelling salesmen and motorcar mechanics throughout the Reef, prompting outraged municipalities from Springs to Roodepoort, fearing for public morals, to ban its sale in perpetuity. The parking lot was uplifted in about 1973 to make way for The Firs shopping centre, designed by John Shunn in association with Harris, Fels, Jankes & Nussbaum, who also designed the Norwood Hyper. 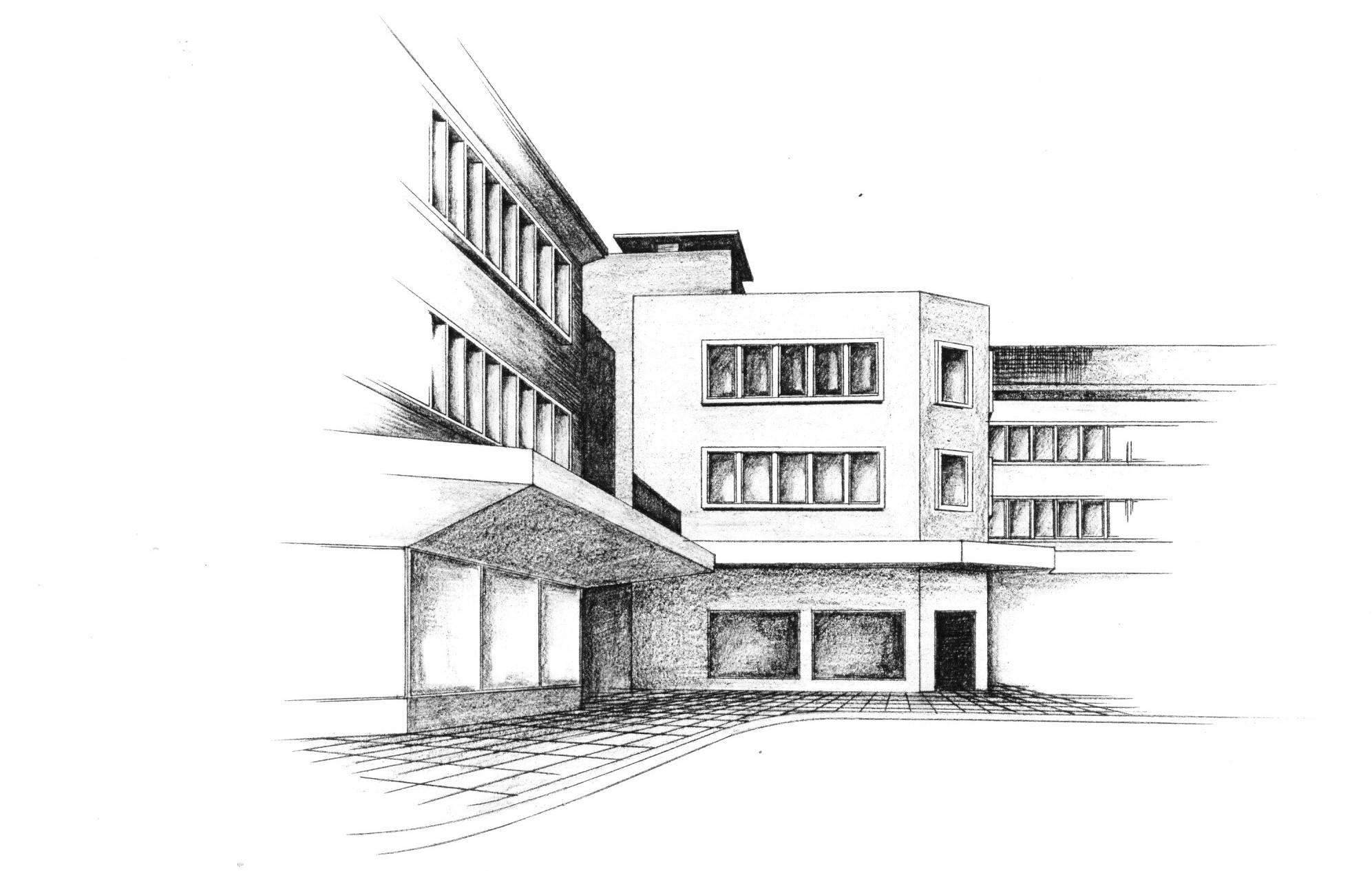 Side view of the Belfast from Tyrwhitt Avenue

The Belfast, on the corner of Oxford Road and Tyrwhitt Avenue, was the place for school-going teenagers to meet their dates on a Saturday afternoon before going on to swim at the Wanderers, or taking the No 8 bus into town to see a film at the Metro, the Colosseum or the 20th Century. The Plaza was a hangout for ducktails and strictly verboten from our elders, as was The Odeon in Rosebank, but we still went anyway. Where else could we see Elvis in Jailhouse Rock? In those days cinema management would not let you buy a ticket unless you were properly dressed, jacket and tie for boys, dresses for girls. No jeans. I can remember people getting dressed for the opera just to go for a matinee at His Majesty’s, so the Belfast corner was always full of well-dressed teenagers. Scruffy teens only became fashionable in the 70s, by which stage the Plaza was gone and His Majesty’s would let in anyone with money. The Belfast was considered to be a shop for polite society, but I do not remember it as being particularly larney. Thrupps was much nicer, and still is. I think the building in the centre of the picture housed a jewellery shop, but I never went in there so do not really know. 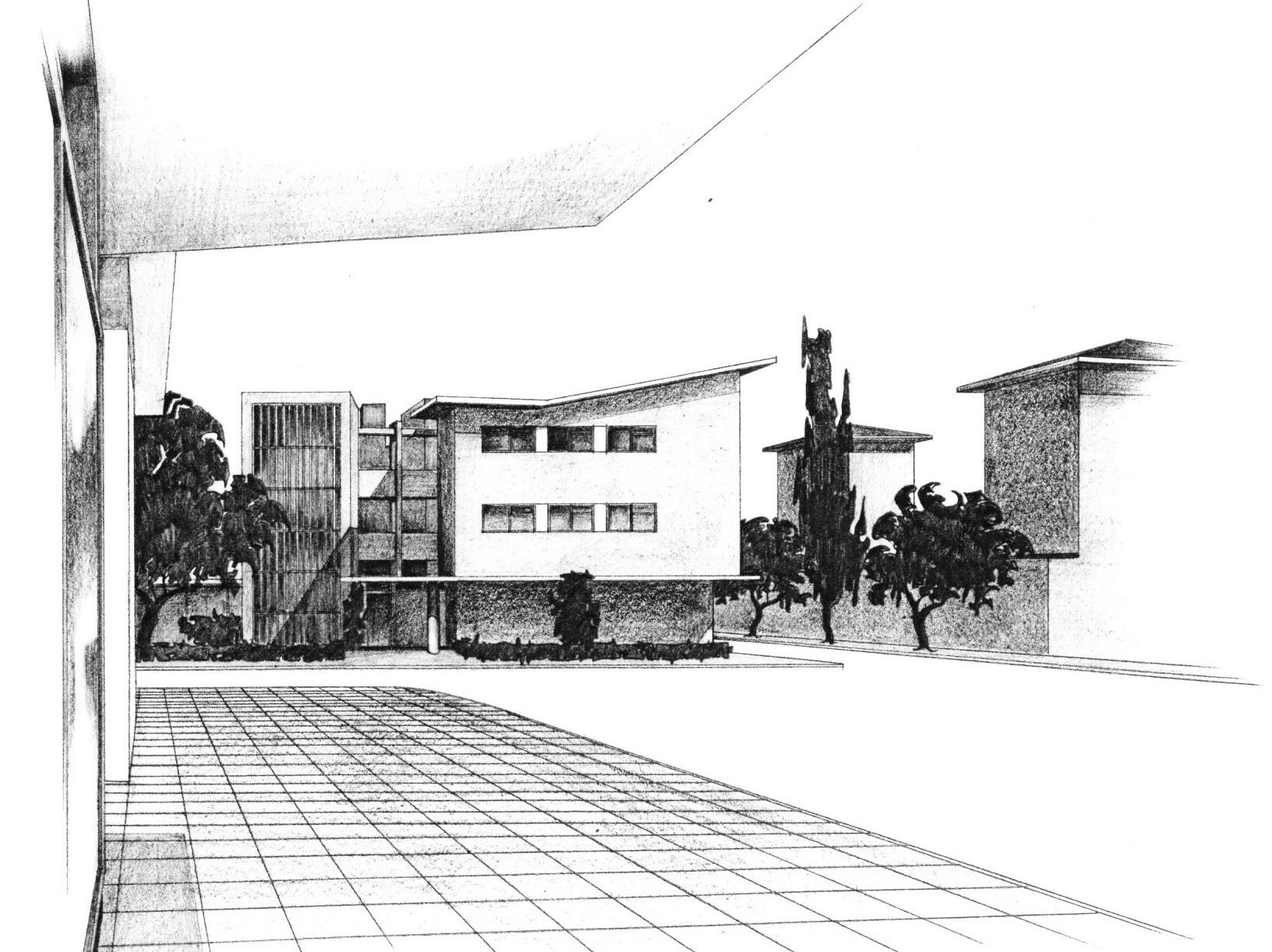 The block of flats stood diagonally opposite the Kelvin Grove, so its residents were forever complaining to the Rosebank Police about the noise. They usually pitched up at about eleven, but always ended up having a drink on the verandah with us, and the noise carried on unabated until the hotel management stopped serving liquor. Then we either went home or moved on to the Balalaika in Sandton. At some stage they demolished the flats and put up a shopping mall, but by that stage the Kelvin Grove was also long gone as was the police station. 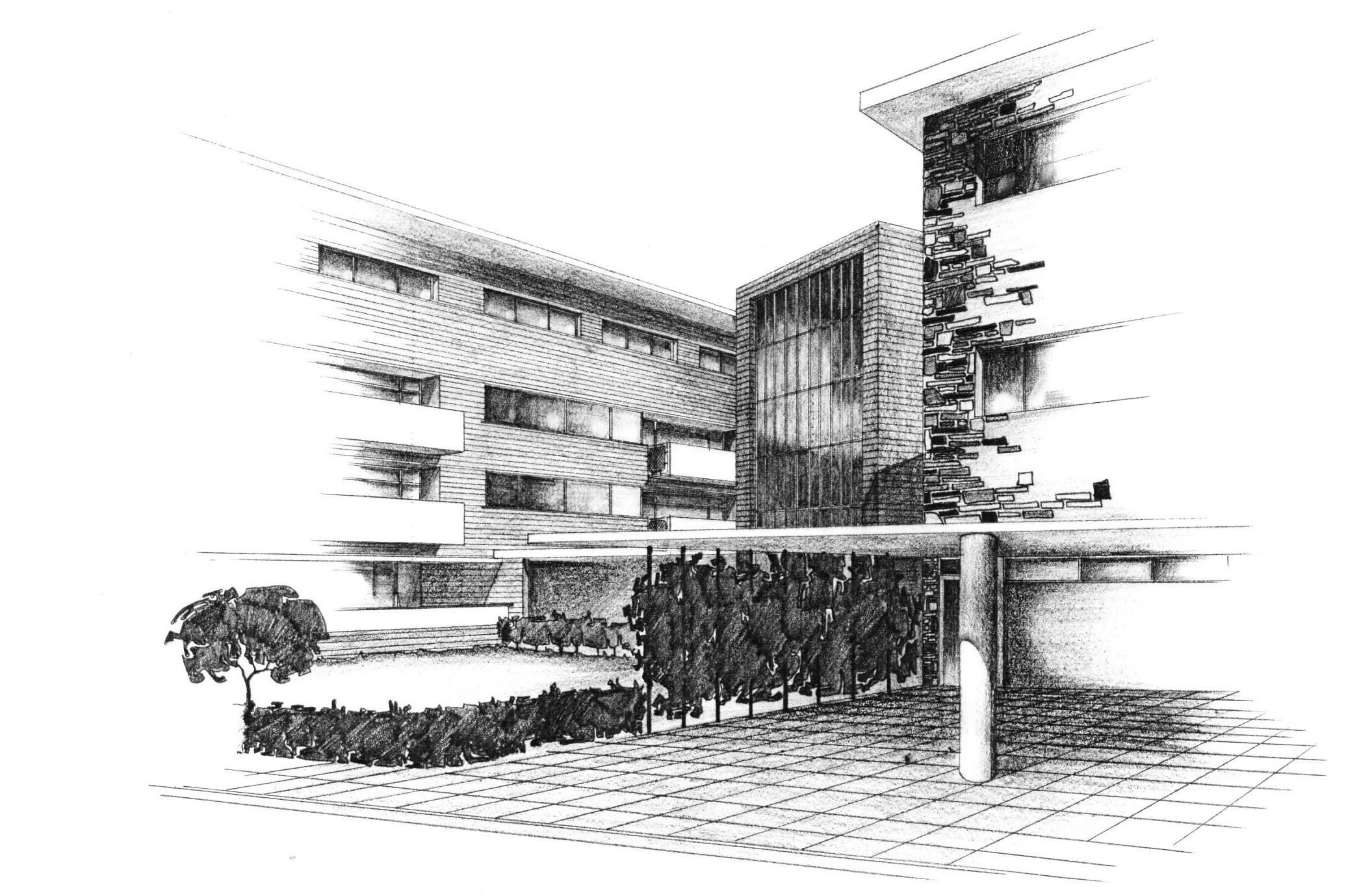 The architecture was pretty well typical of the 1950s, and I am quite sure that had anyone ever invited me in, I would have found the place furnished with uncomfortable kidney-shaped armchairs and panelyte tables in pastel colours, which were bloody awful but are worth a fortune today. My favourite was a bedroom site rendered in black panelyte with embedded glitter and a golden plastic trim, which I saw in a furniture shop in Sabie that same year. 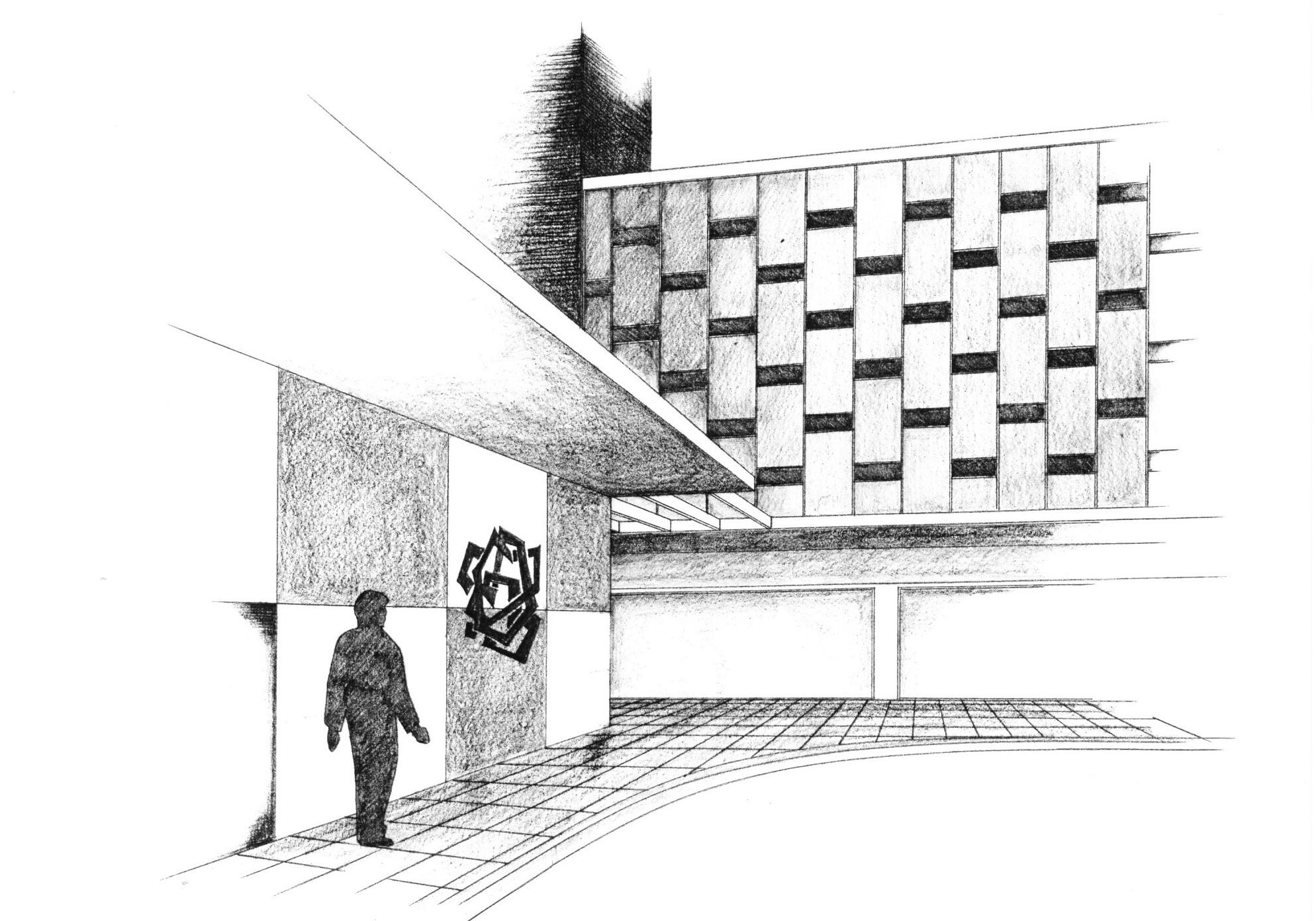 If you shopped at the OK Bazaar’s in Rosebank, you could have your groceries bagged and boxed, and delivered by means of a mechanical overhead conveyor belt to the parking area at the back of the shop, where you could collect it and stash it into the boot of your car without anyone knowing that you shopped at the OK. Considerate, huh? That way no one could see that you had also bought the print of a blue woman by Tretchikoff from their picture galley. The delivery area was hidden behind a screen wall tastefully finished in green-and-white marble with a funny modernist squiggle embedded on its surface. In the 1960s strange squiggles like that were passed off as Modern Art to the visually illiterate. I do not recall if the Belfast sold groceries, but if you were well-off, then you shopped at Thrupps, where you could buy your food and either have it delivered to your home, or your bags would be carried to your car by an obliging and suitably obsequious sales assistant. 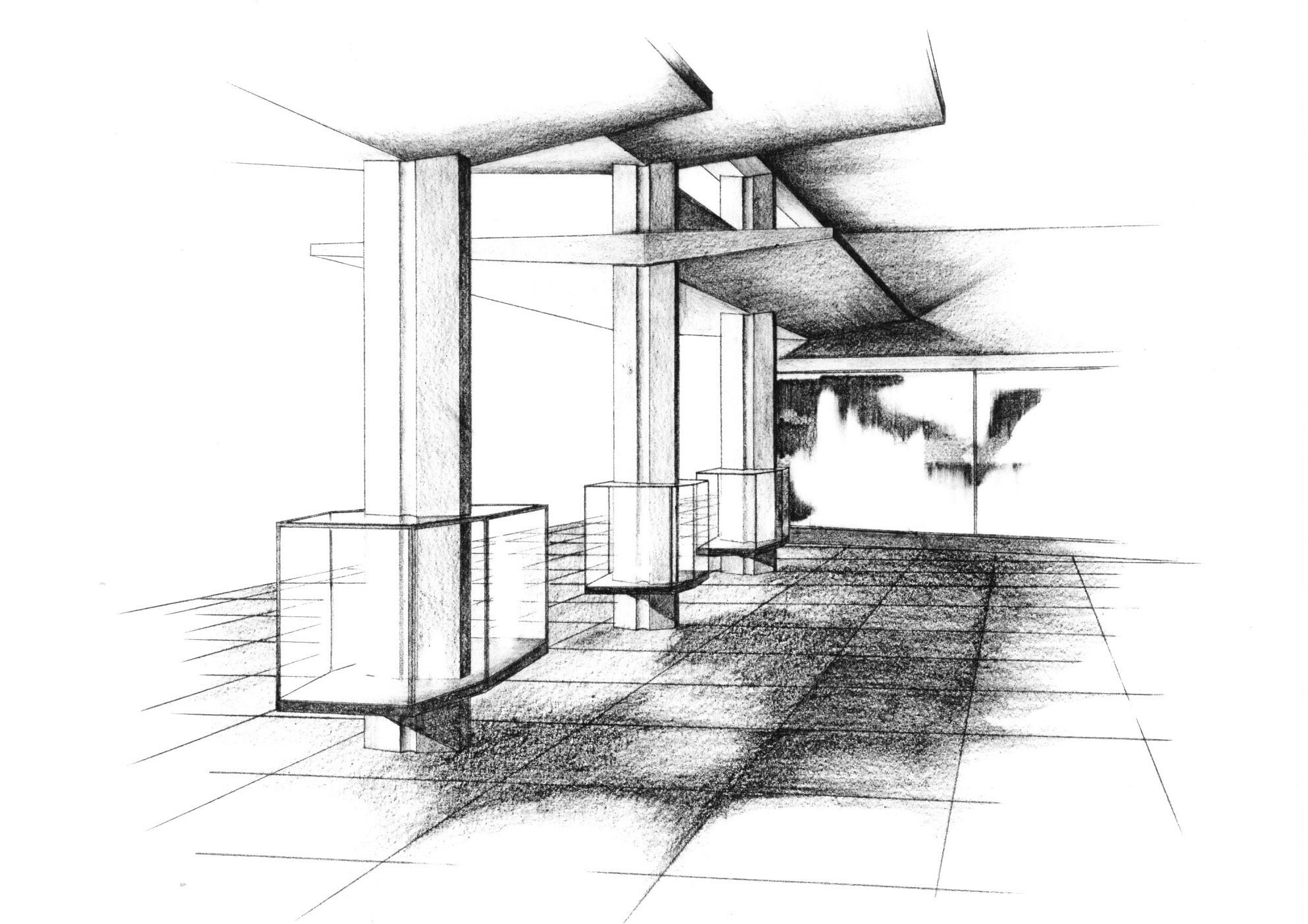 I always thought as a student that the main entrance to the OK Bazaars, on Oxford Road, was quite well designed, and liked the superimposition of angles and slabs that created a recessed atrium off the pavement line. Later on I realised that, like most other modernist architecture, this was just an architect’s way of creating an entrance to the building without seeming to be creating an entrance to the building. Entrances to buildings are verboten in modern architecture; you might as well as put an arch and a pediment supported by giant rusticated columns on either side! 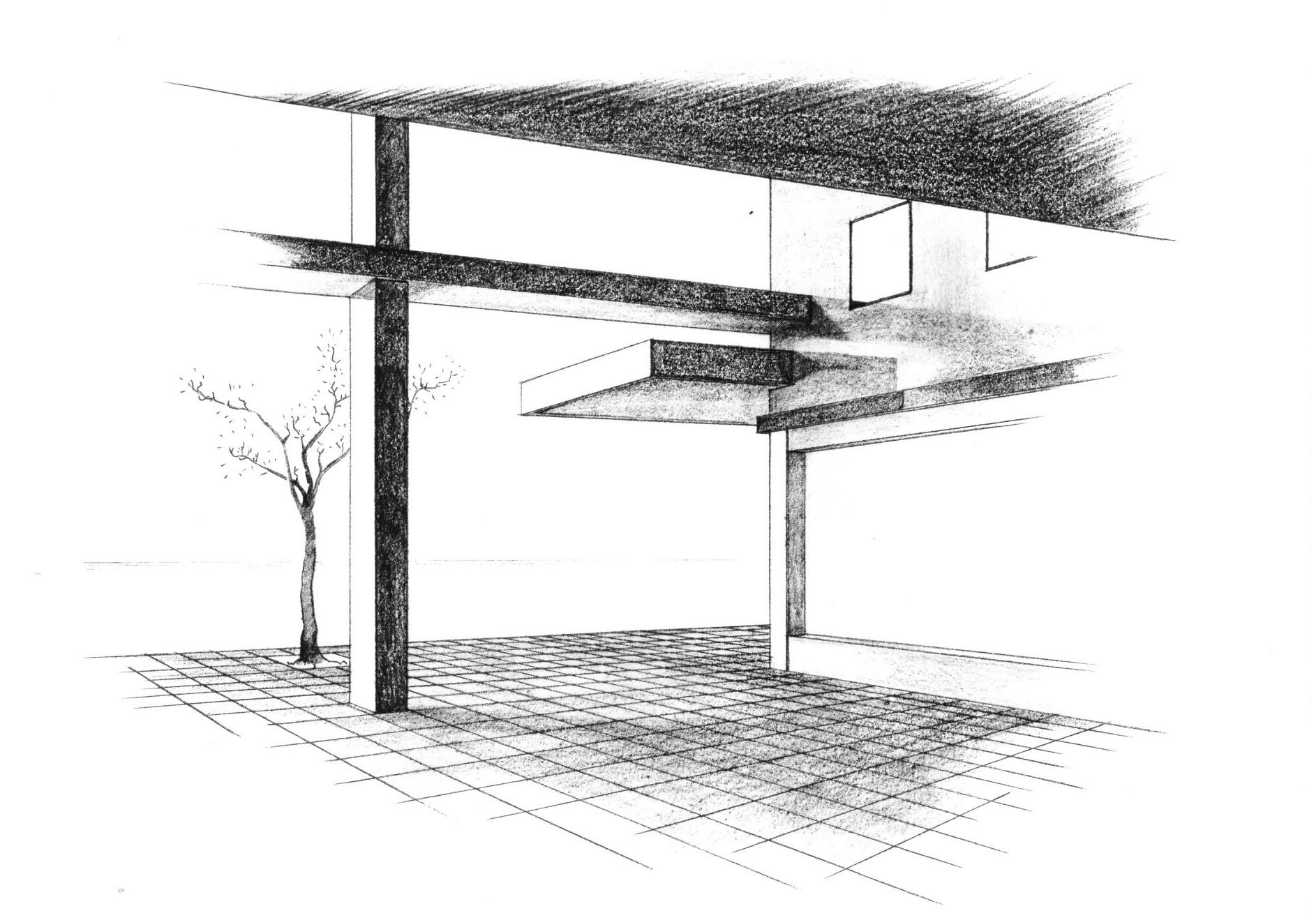 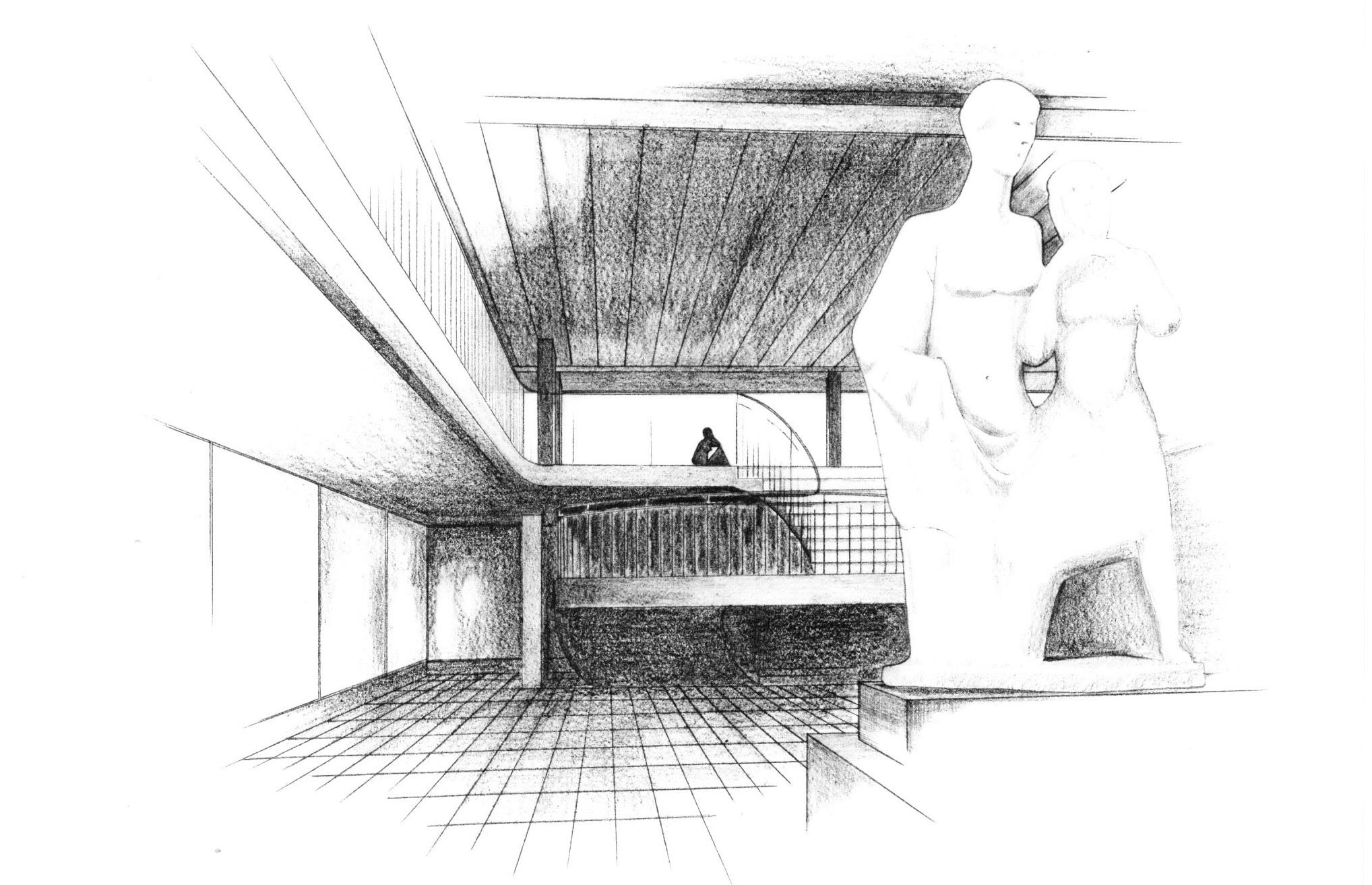 The ghosts of Mutual Arcade

Mutual Arcade was a nice double-volume gallery inhabited by rather absurd statues in white marble that looked like people draped in white sheets pretending to be ghosts, but everybody put up with them because they were, after all, Modern Art, and everyone knows that you should be respectful of Art, no matter how modern. The statues stood on plinths which, I think, were part of fountains, but my memory is a bit dim on that point. The Arcade continued to operate as a shopping area for many years after other parts of Rosebank had been demolished and redeveloped, and in all those years I never saw those statues vandalised or ridiculed in any way, not even by someone placing a pork pie hat on their heads. The Arcade was airy and cool in summer, and had nice shops that sold cotton reels and second-hand cameras and a dress maker, the kind of things which no-one else carried, and there was a nice coffee shop at the far end, tucked in under a wide, spiral staircase. 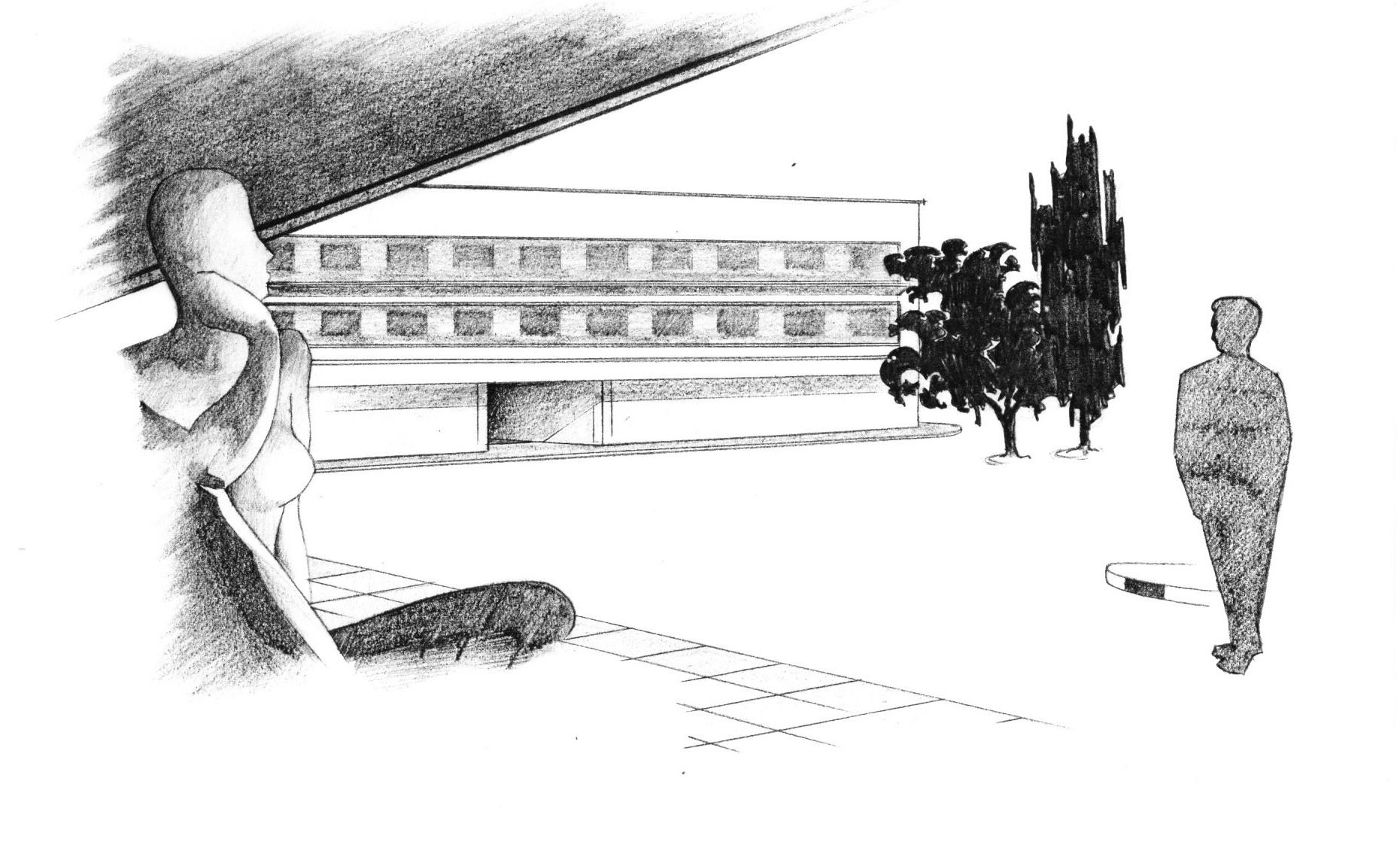 The last drawing in this set is probably my least favourite, but the aesthetics of a parking lot are unforgiving and do not give you much to work with. Besides, the building on the far side, where Fournos is now located, was also quite dreadful. Once upon a time it was a courtyard building which, having Modernist pretensions, you entered through a poorly marked passage. Inside was the first ever Golden Spur restaurant, whose T-bone steaks were legendary, and if the Greek owner liked you, you were served a dish of the most delicious taramasalata ever. It was a favourite place for a late-night meal or a pre-party date, and I never knew it to be empty. One Saturday night a group of us decided that a light supper might be fun and reached the Spur roundabout eleven, and we entered the courtyard just in time to see a drunk called Rocky being evicted from the premises. Rocky was a notorious character in Rosebank, who had been born into a genteel northern suburbs family, but whose sole ambition in life, even as a child, had been to become a thug. Tonight, too drunk to enjoy his platter of taramasalata, he first assaulted the lady cashier and then hurled a patio chair through the Spur’s plate glass window. At this the kitchen staff picked up bar stools and assorted blunt instruments and took it in turns to beat him on the head till at last, snarling and spitting blood, he slowly sank to the ground. The last I saw of him was later in the parking lot, lying in the gutter while two members of the Rosebank constabulary were trying to work out how to bundle him into their van without getting blood on their clean uniforms. Rocky died some years ago of cirrhosis of the liver, but the parking lot is still there.