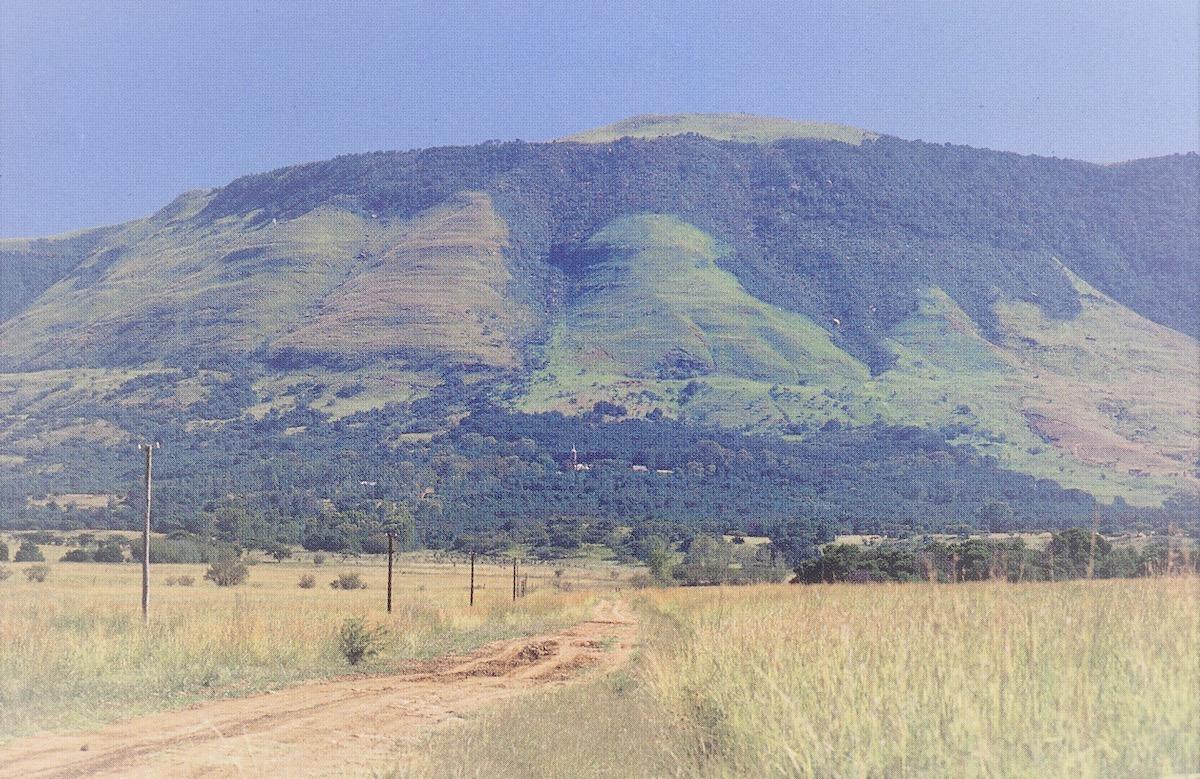 Maria Ratschitz Mission was established by the Trappist monks in 1888. The mission is set on 3200 hectares of land and nestles in the fertile Nkunzi valley at the base of Hlatikulu Mountain.

The spire of the beautiful church can be seen from great distances and the peal of the church bells can be heard throughout the valley. 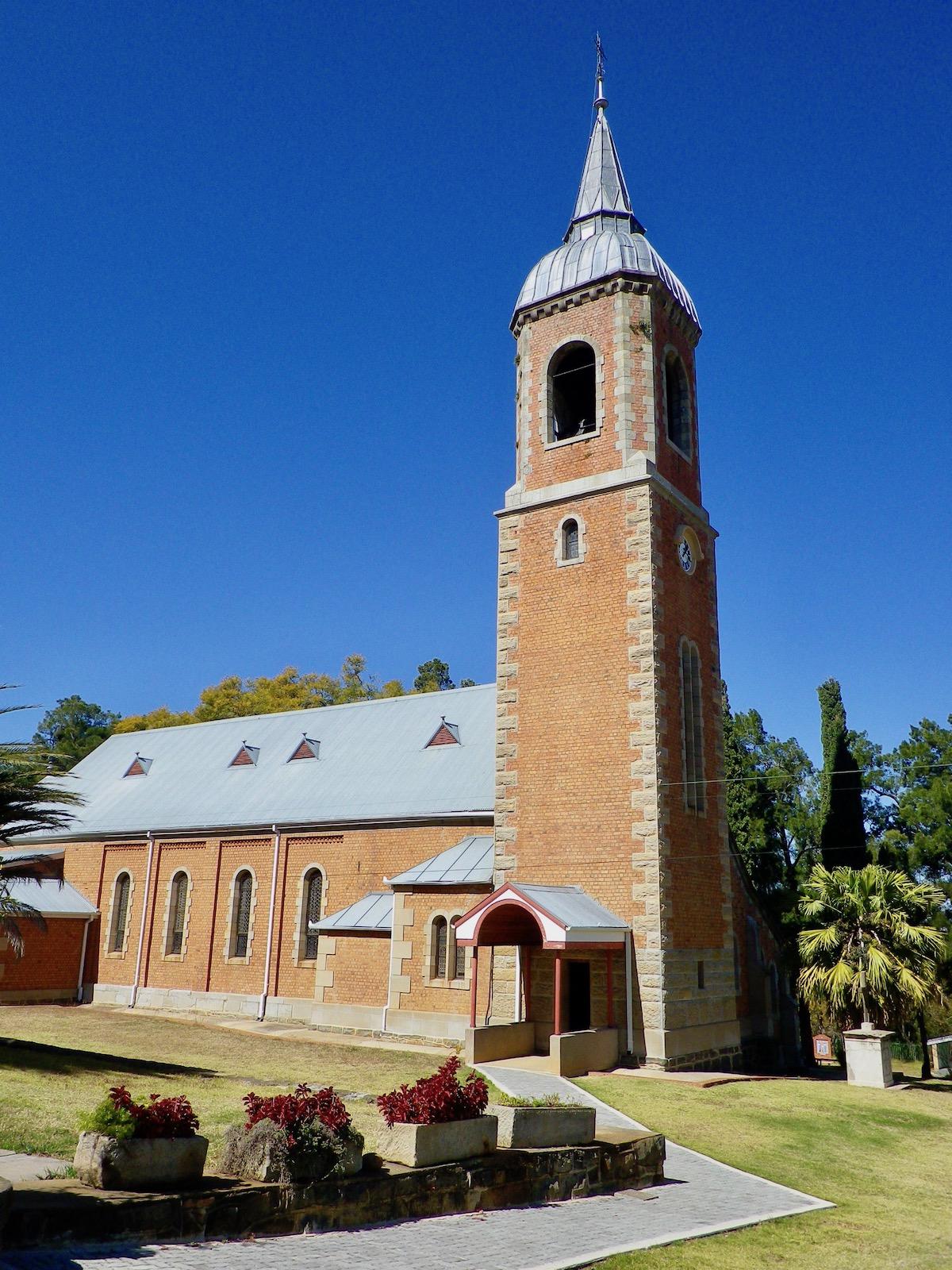 In 1886 two silent Trappist monks from the Marianhill monastery chose the site for the mission station as it reminded them of the Bavarian area from which they originated.

Maria Ratschitz was a daughter house of Marianhill, outside Pinetown. The mission was established on the farm Boschkloof in the Biggarsberg, which was purchased by Father Franz Pfanner for approximately ₤6 000. It was named Maria Ratschitz after the Marian shrine in Leitmeritz in northern Bohemia. 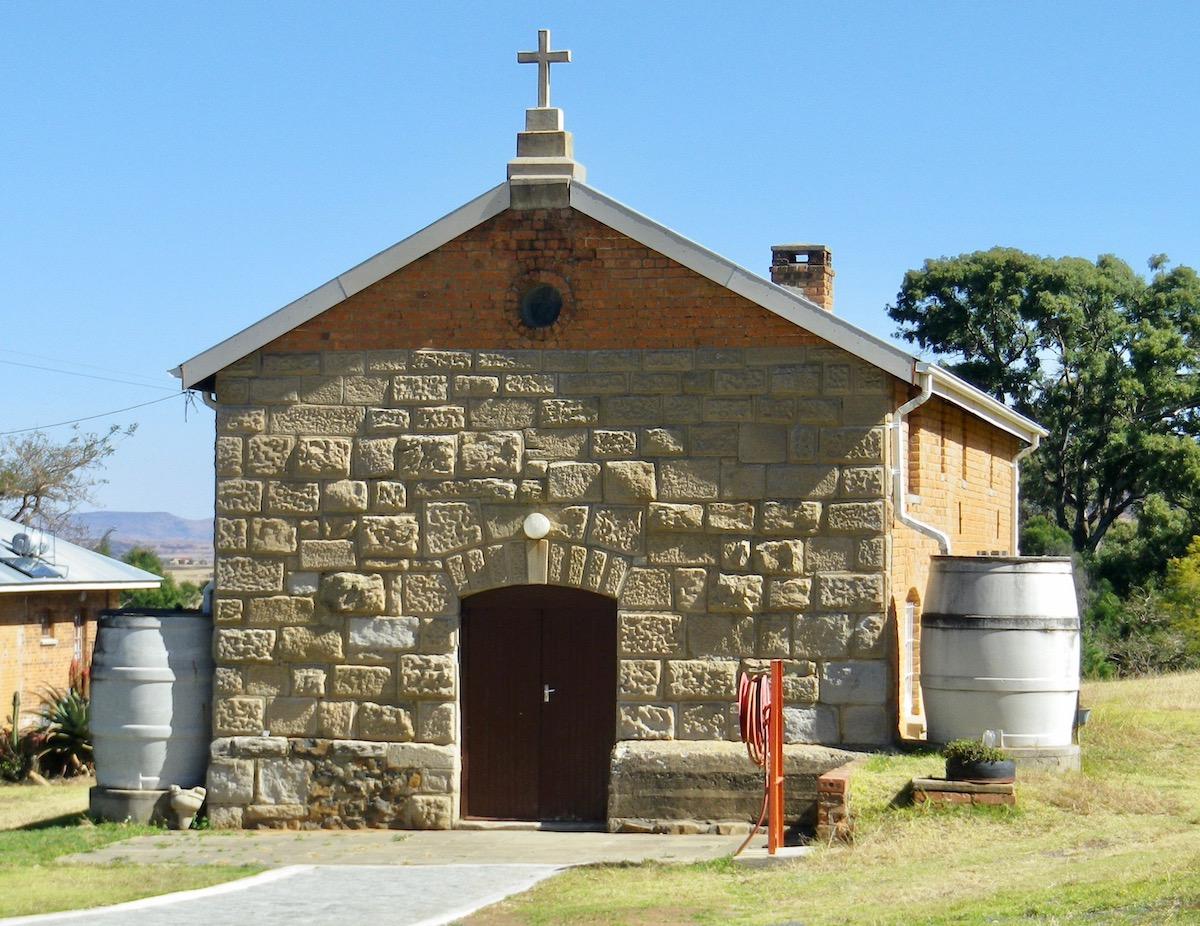 The two monks lived in a simple wattle and daub cottage. The framework for this cottage was made from two huge yellowwood trees from the forest. They worked with dedication to create a model farm with fine Friesian herds and superb vineyards.

An important aim of the agricultural order of Trappists was to create productive agricultural communities of African converts - to stimulate the emergence of independent agricultural farmers. They taught the dignity of labour and the principles of sound farming. They also instructed the young men in the skills of wagon building, wheelwright’s work, blacksmithing, wine making and cooperage, building, carpentry and shoemaking. The relationships with the surrounding farmers and miners were good.

In return for adopting the Catholic faith, Africans at Maria Ratschitz were provided with land and the freedom to use it as they wished. Initially, they did not have to pay rent. Gradually, however, as the monks introduced the community to the beliefs and practices of Catholicism, they also introduced them to the responsibilities of life as rent-paying tenants. Gradually the scattered local people were encouraged to move into the laid out village. A school was opened, and by 1907 had 112 pupils. The monks also provided medical care.

Between 1905 and 1910 the first substantial church was built. The church with its tall elegant bell tower has magnificent stained glass windows, lovely frescoes and a carved high altar and pulpit. 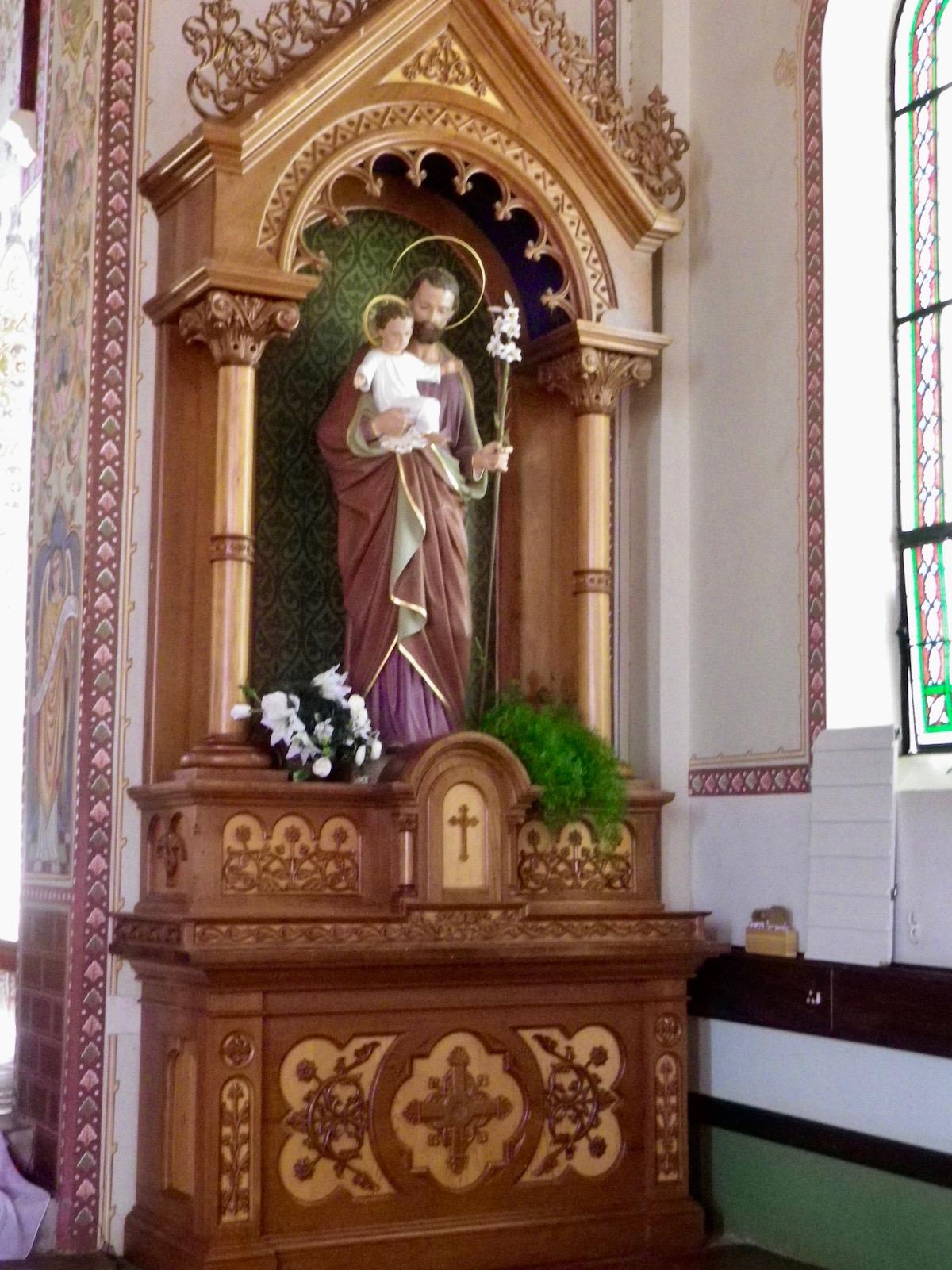 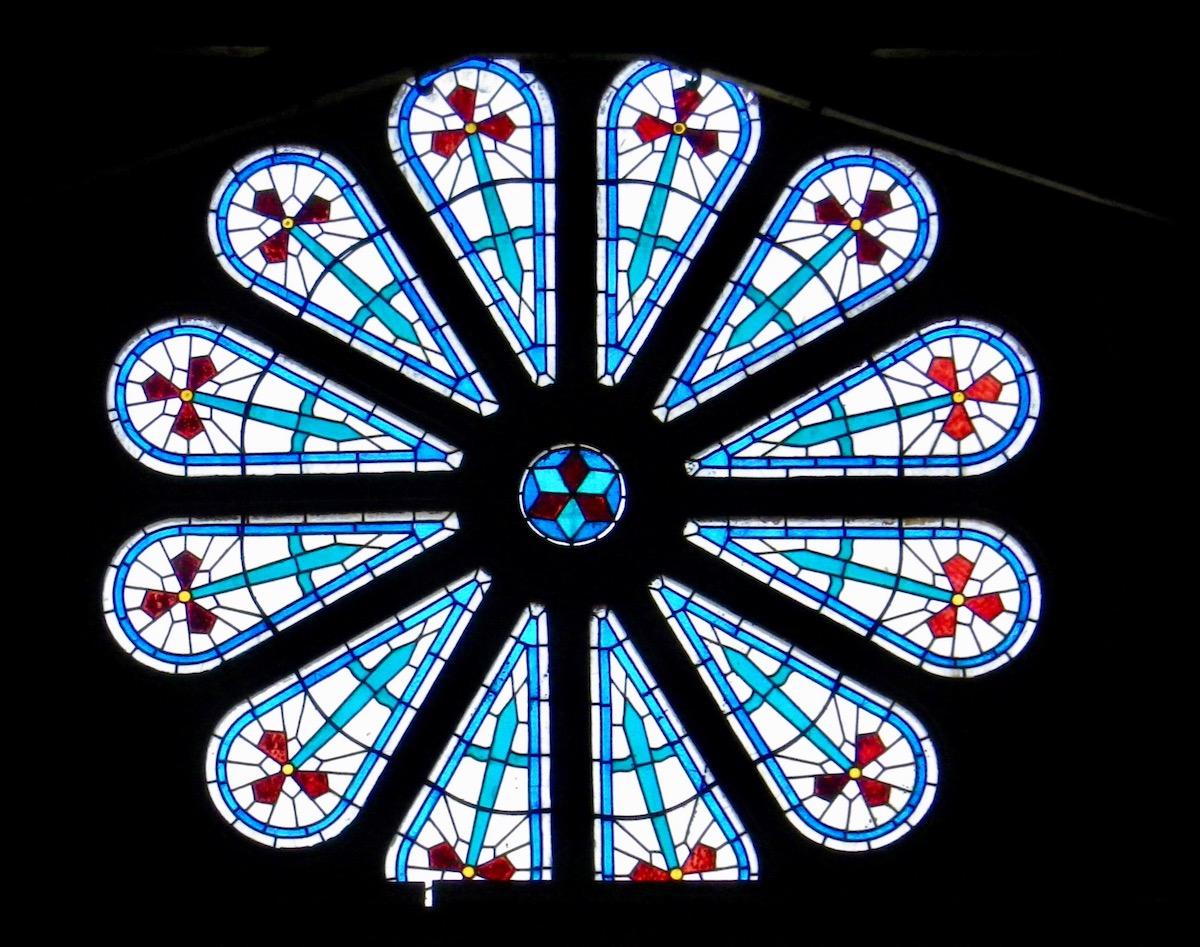 Lit, originally, by tall candle sconces, aglitter with polished brass and woodwork, the clergy processing in their rich, colourful robes, the organ and the lovely African voices echoing from the rafters, Maria Ratschitz church brought the beauty and grandeur of the centuries old Christian faith alive in the Wasbank valley.

The Trappists established a nursery to supply trees as well as a dairy and vineyard.

Although the Trappists believed that for African farmers to become independent they would need to own their property; this never came to fruition at Maria Ratschitz.

The first obstacle arose from the fact that although the mission was staffed by the Religious Missionaries of Marianhill; the authority for the area fell under the Natal Vicariate. The Bishop of Natal did not approve of the land owning scheme.

In the end the scheme failed because of the state policy of land ownership. As mission land, Maria Ratschitz had been exempt from the provisions of the 1913 Land Act. In 1936, this period of exemption came to an end. In terms of the new law it was no longer possible for the owners of Maria Ratschitz to sell off sections of the farm to Africans.

At the stroke of a pen the 1936 Land Act cancelled out the missionary vision of a vigorous and economically stable and land owning group of farmers at Maria Ratschitz. As tenants on a farm in a "white" area, the people were now vulnerable to eviction.

Many members of the community, who were now bitterly disillusioned, left the mission. During the 1940's the mission entered a period of stagnation and decline. The outbreak of the Second World War had a devastating effect on the mission. The German Trappist monks were interned and financial support from Germany came to an abrupt end.

The Trappists never returned to the mission, which was subsequently staffed by other orders - French Oblates and later English Franciscans. These orders did not have the same agricultural expertise as the Trappists. During the 1940's and 1950's many of the farm labourers left to find jobs in the towns and cities.

From 1958 when the Franciscans took over the mission, it was found that running the mission was a severe financial drain and that they were short of brothers to administer the farm. A decision was made to lease out portions of the farm to surrounding farmers.

The decline of the condition of the land and the buildings continued and in 1965 a scheme known as the Church Agricultural Project (CAP) was mooted. Neil Alcock offered to help run the farm and try to resuscitate matters. He wanted to introduce a scheme to encourage and assist Africans to produce food on the mission lands and so rehabilitate the lands and feed the families. It was also hoped that this scheme would protect the black families living on the mission farms, as the threat of eviction was growing.

He envisaged the scheme as an agricultural co-operative. Cattle were handed to CAP so that they could be managed as a collective herd. Depending on the number of cattle they handed over, African shareholders received a share of the annual profit.

At first the community supported the development. One of the reasons why they co-operated, and why later it went so wrong, was that they hoped to gain some measure of control over the land that had been leased to the surrounding farmers. In the early years CAP made progress at the mission. A number of different projects were set up: repair to buildings, fences and dams, renewing of the pastures, rearing chickens and producing milk. Surplus milk, eggs and vegetables were sold. Women were involved in basket making, sewing, pottery and beadwork.

In 1967 the government informed the Maria Ratschitz tenants that they would be removed in 1968 to a black area. This had a negative impact on CAP. In 1968 the first 2 000 Africans on a neighboring farm were removed. This created further tension and uncertainty among the people. By 1975 Alcock had left Maria Ratschitz and later that year there was no longer a resident priest as the community had been moved away to Lime Hill.

With no resident priest the buildings fell into disuse and slowly deteriorated. For nearly 20 years the buildings stood silent and neglected. The staff at Talana Museum negotiated with the Bishop Od Dundee, into whose diocese it fell, for permission to remove the clerical robes, altar clothes, small statues, beautifully carved candlesticks and other religious items that had been left in the buildings. Over the years of keeping an eye on the condition of the buildings we had noticed that some of these items were disappearing.  Permission granted they were all brought to the museum, cleaned and then stored in museum conditions until such stage as the diocese requested them back as they then had a home for them.

In the 1990’s a plan for the restoration and development of the mission was begun by the Bishop of Dundee.  An anonymous donation from Germany was received for the purpose of restoring the church of Our Lady of the Seven Sorrows and other buildings. Plans were drawn, a community forum set up and slowly the buildings were transformed. The project was used as a skills development programme and building, carpentry, glazing and a host of other skills were taught to the local people involved in the restoration process. It was a long and careful process, finding sponsors, funding, people and businesses to assist. Skilled professionals came from German to teach the lost art of restoring the frescoes inside the church.

Maria Ratschitz frescoes and paintings depicting some of the 14 stations of the cross via Talana Museum - 3.jpg 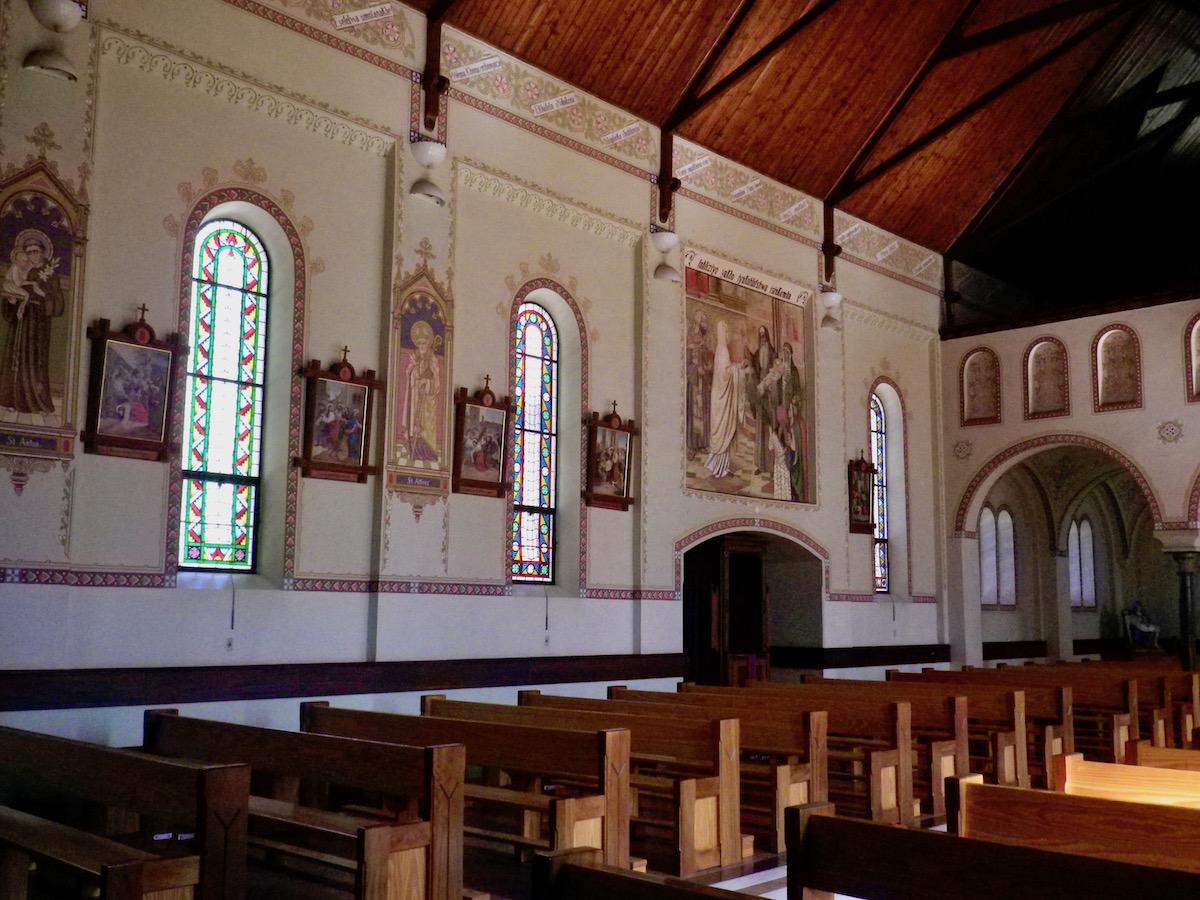 Maria Ratschitz frescoes and paintings depicting some of the 14 stations of the cross via Talana Museum - 2.jpg 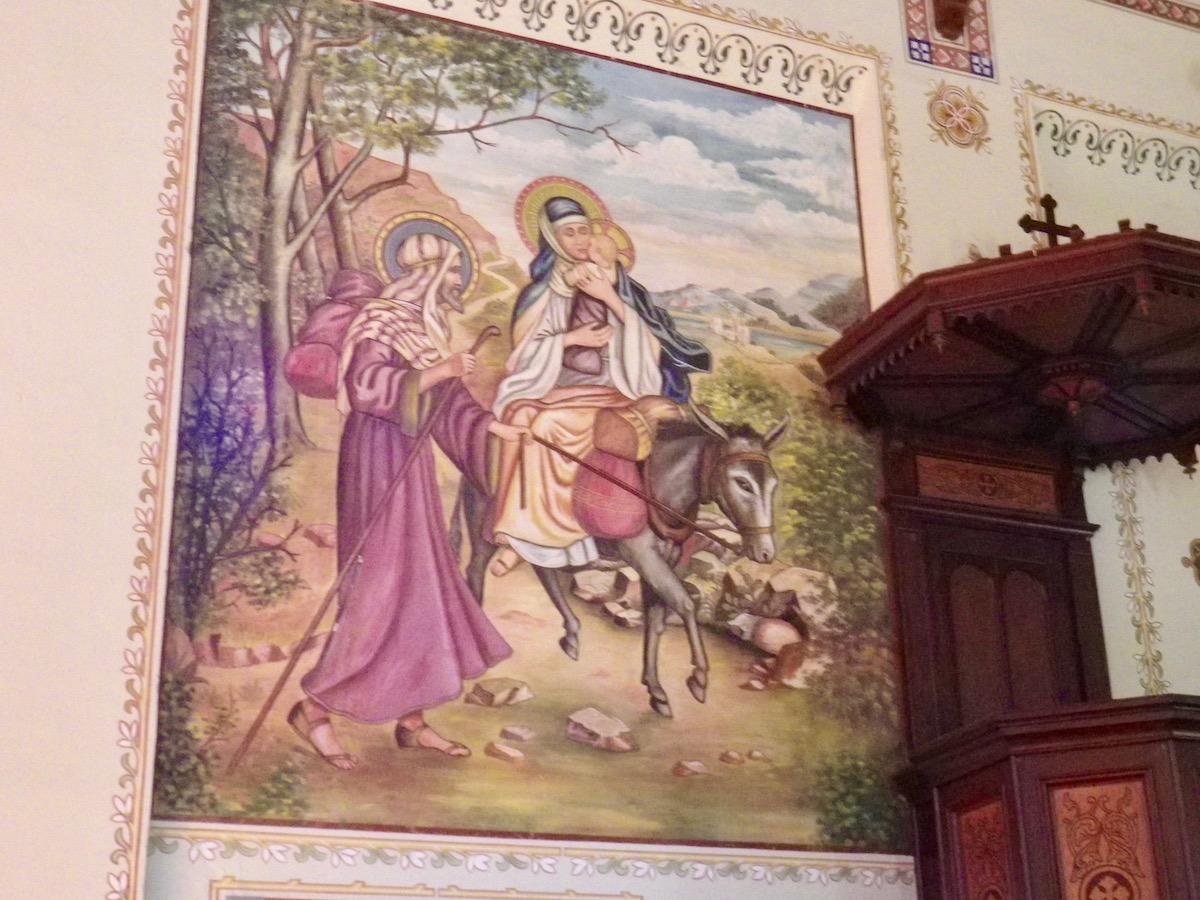 Maria Ratschitz frescoes and paintings depicting some of the 14 stations of the cross via Talana Museum - 1.jpg 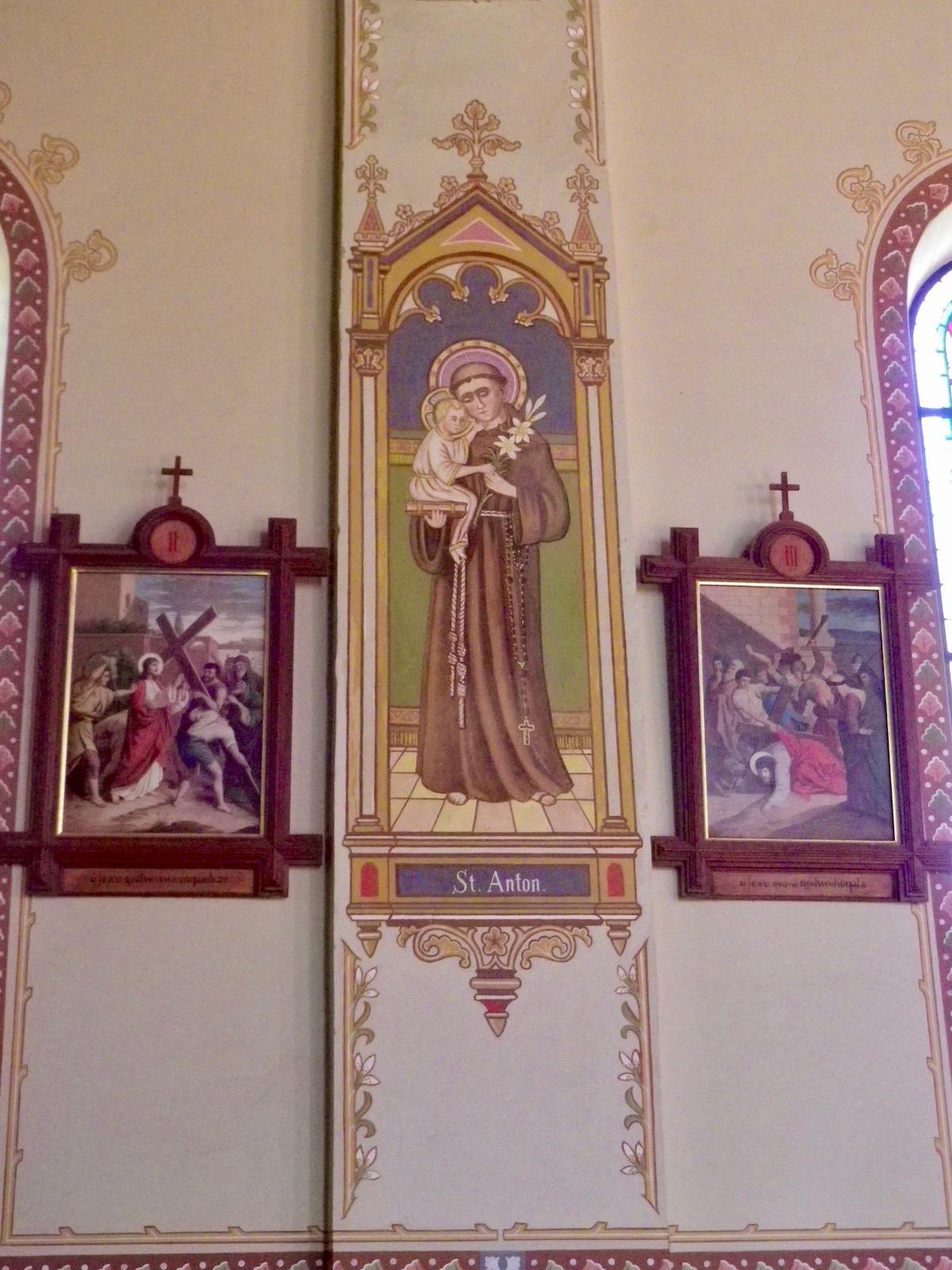 I remember the day I arrived at the site and the huge copper clad dome from the top of the bell tower had just been lifted down to the ground for restoration. Only once you were close up, did you realize the size of it and the tremendous weight.

The restoration and new life at Maria Ratschitz has been an inspiration for the community in the valley. The restoration of the buildings and site have been remarkable over the past 20 years. Now a retirement home for nuns, a retreat and a remarkable site - peaceful, thought provoking and a visit that will remain in your minds and hearts for year's to come. 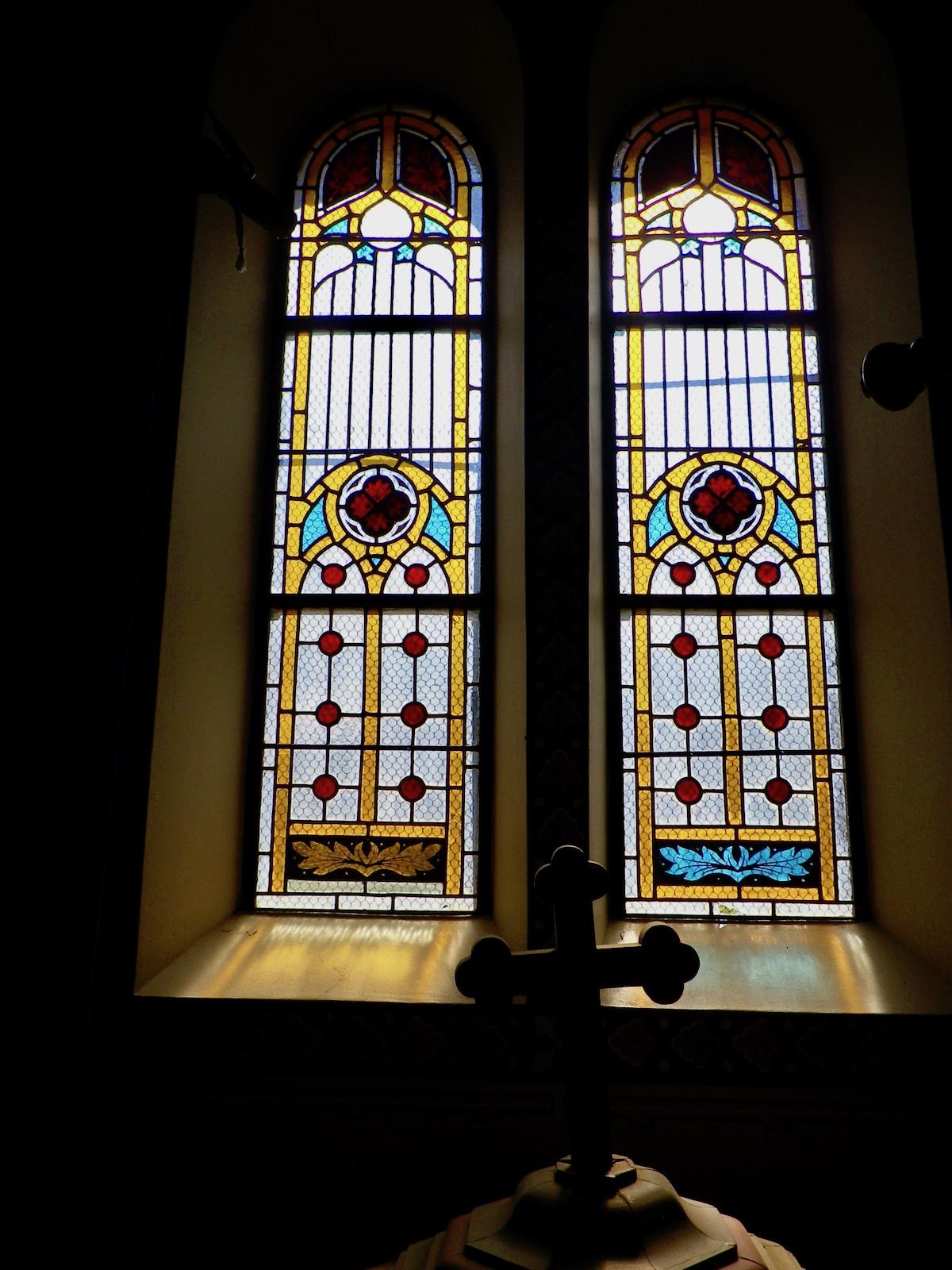 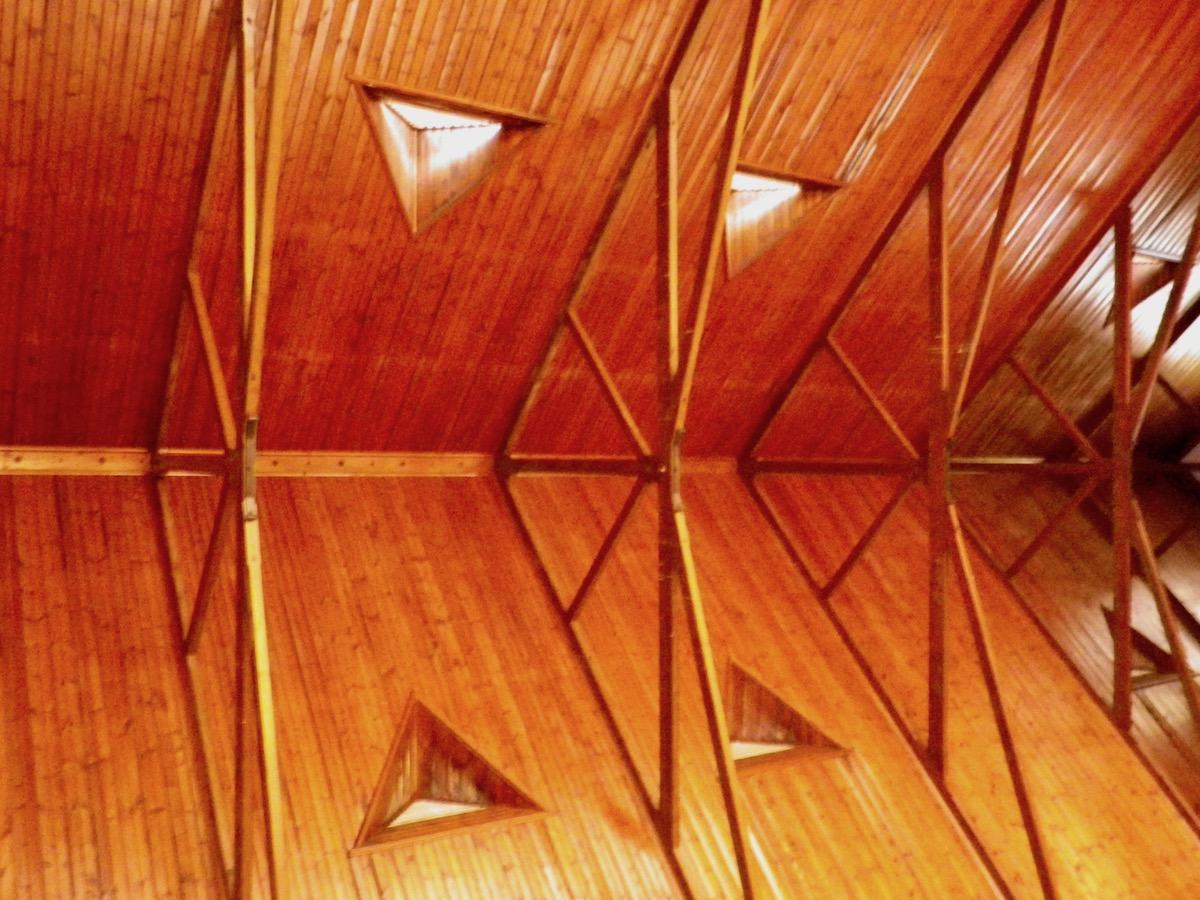 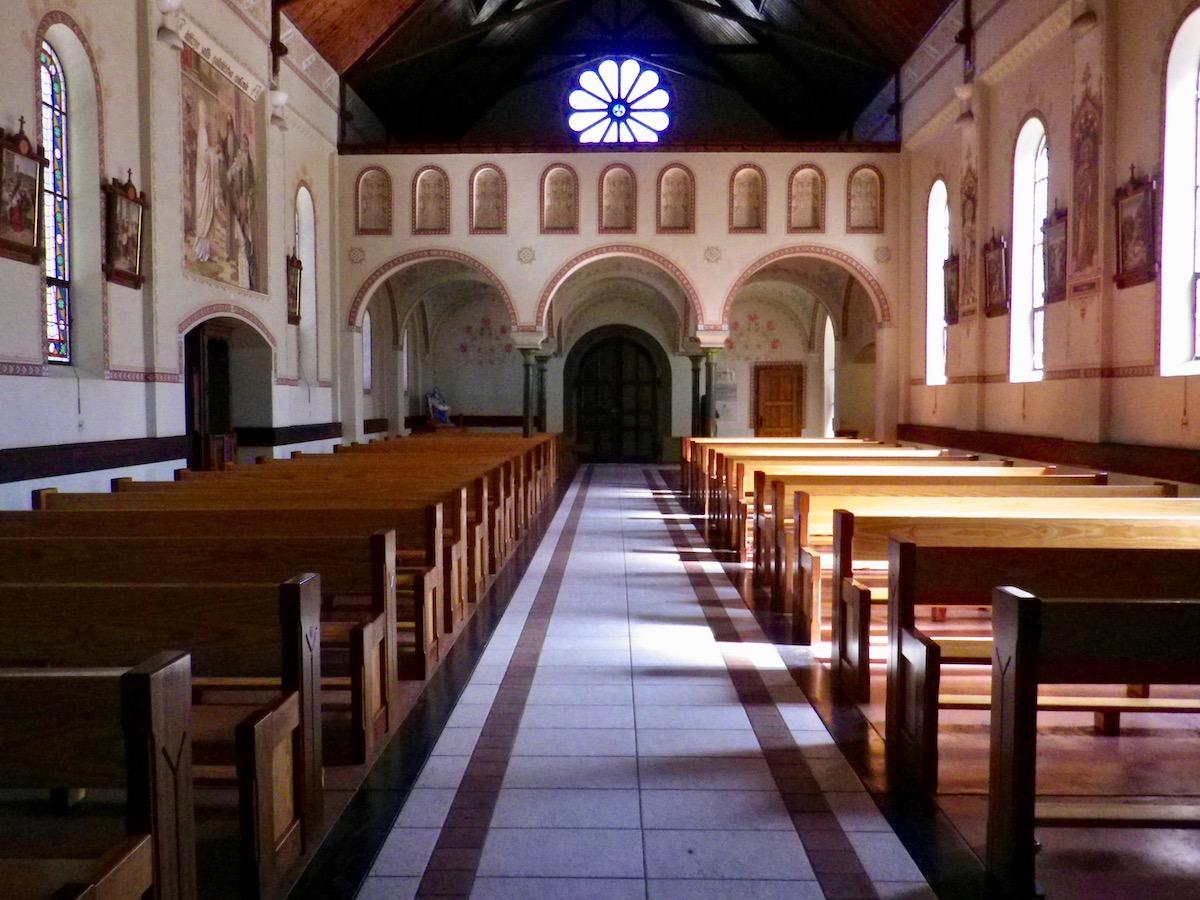 Guided tours to the site can be arranged through Talana Museum - info@talana.co.za

A transcript of information stone that reflects the restoration can be seen inside the church.